On Apr 17, 2017, Gartner, a famous research institution published the blockchain cloud service report for the world leading public cloud service providers. Ali cloud is the only Chinese technology company on the list.

On Apr 17, 2017, Gartner, a famous research institution published the blockchain cloud service report for the world leading public cloud service providers. Ali cloud, as the only Chinese technology company on the list, won the highest score in 6 judging standards and ranked 2nd place, only after Microsoft Azure, and is ahead of AWS and Google. The judging standards of Gartner include the fundamental technology of blockchain, infrastructure, practicability, expansibility, safety, and development, etc. Ali cloud got the highest score in 6 indexes. According to Gartner’s analyst, the blockchain service of Ali cloud not only could be integrated with its cloud services but also provide the value-add ability for its customers. 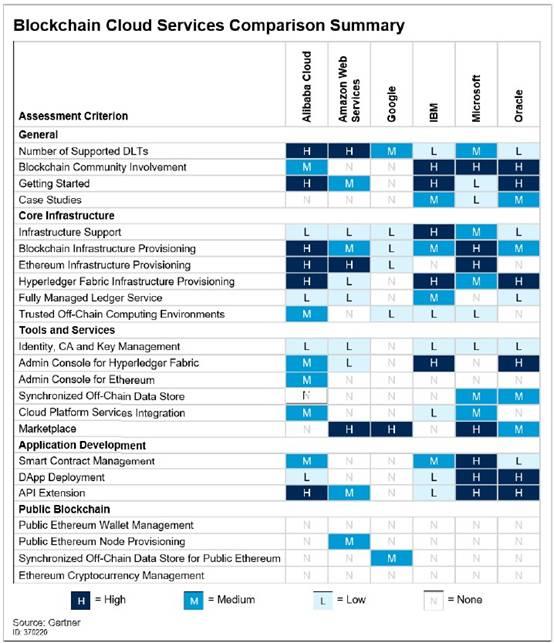 Furthermore, the Gartner’s report also pointed out that the Ali cloud’s BaaS supports the ant blockchain, Hyperledger Fabric, Quorum, which are 3 mainstream blockchain technology, and offers flexible choices to enterprises. Meanwhile, BaaS is the first products that apply the Intel SGX safety technology into Hyperledger Fabric. In aspects such as high-level security protection, safe and flexible Internet connection, the BaaS could meet the financial-level safety standards.

Ali cloud has invested a lot in the blockchain technology. According to Gartner, in 2017 and 2018, Ali cloud ranked 1st place in terms of the number of blockchain patents. In Aug 2018, Ali cloud, together with Ali pay, announced to invest in the construction of the infrastructure of blockchain. Currently, the two parties have jointly served many industries, including government, retail, manufacturer, finance, Internet, media, etc. For example, Ali cloud and Ali pay jointly developed the blockchain solution of medical care, and it has been successfully applied to the electronic prescription. The blockchain solution could protect the prescription and guarantee that it would not be changed during the circulation process.

Although cloud computing has already be regarded as a mature and successful technology, the blockchain is still at a very early stage. Currently, most parts of the blockchain cloud services are in the beta stage, with low maturity. Ali cloud has occupied 43% of Chinese cloud computing market share, and its keep improving the R & D ability. The cloud computing industry would keep increasing in the future. According to Gartner, in 2019, the global public cloud market would increase from USD 182.4 billion (2018) to USD 214.3 billion, with an increased rate of 17.5%. Meanwhile, IaaS (infrastructure as a service) would be the segment market that has the fastest increasing, which is expected an increase from USD 30.5 billion in 2018 to USD 38.9 billion in 2019, with an increased rate of 27.5%.  PaaS (platform as a service), on the other hand, ranks the 2nd place in terms of increasing rate, 21.8%.