WIM is delighted to announce the participation of Murendeni Mafumo, Okey Esse, and Roy Njoka, three techpreneurs who have paved theirs ways across different industries – water, energy and fintech – in Africa. They are now confirmed speakers for the African Chapter panel discussion at WIM 2020. The panel's focus will be on 'How African tech change-makers will shape Africa's future' moderated by Luuk Eliens, Chief Commercial Officer at Xnode. 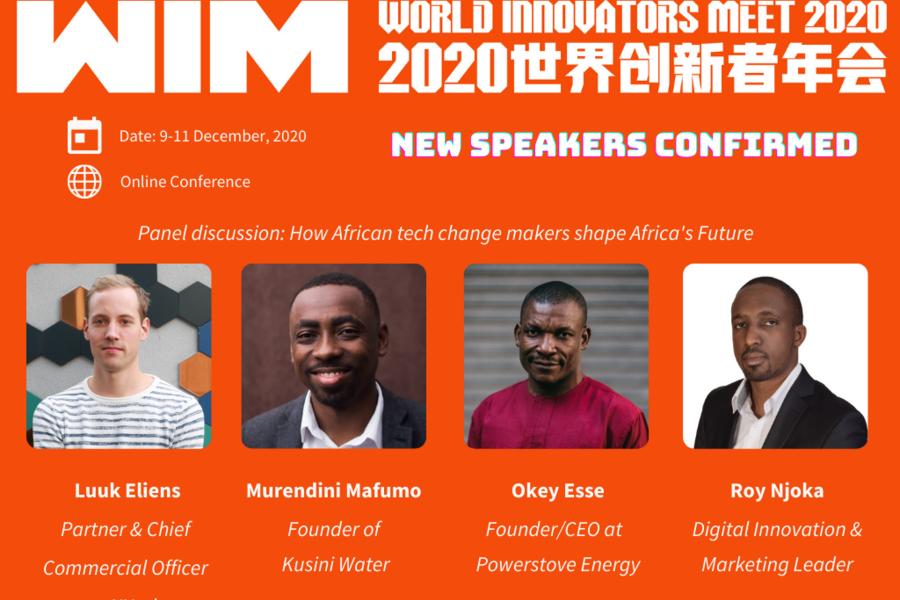 On December 9-11, 2020, EqualOcean will host this year's World Innovators Meet (WIM2020). Due to the unprecedented events regarding COVID-19, WIM2020 will take on a bolder stance and adopt a more global outlook by taking the form of an online conference that will be streamed simultaneously in all countries and regions that champion the realm of technology and innovation.

During the World Innovators Meet, the WIM Committee will release the annual blockbuster WIA list, the World Innovation Awards, based on our annual industry and investment research findings, together with a series of research reports.

World Economic Forum statistics have it that, by 2025, 97% of worldwide growth will occur in the world’s emerging markets, many of which are in Africa. Africans are watching technology develop and evolve in ways never seen before. The continent is leading the way in mobile payments, with money transfer service M-Pesa now serving 30 million users across ten countries. Africa isn't just driving technological change for Africa, but for the world at large. By 2025, the population of Africa will exceed that of India and of China. Shortly after that, about 40% of the world's working-age population will be in Africa, a continent of 54 countries.

The potential for economic and technological growth in Africa is clear. Yes, many African countries still face challenges related to infrastructure, security and education – yet, nevertheless, people like Murendeni Mafumo Founder of Kusini Water, Okey Esse CEO of Powerstove and Roy Njoka Co-founder of Digiduka have forged paths towards sustainability for themselves, their countries and the continent at large.

Murendeni is an inspiring leader who believes in finding local solutions for local problems. He is a water scientist with 10 years’ experience within the water and sanitation sector and a YALE University Mandela Washington Fellow, 2014. After studying chemistry and water treatment technology in South Africa, he started off working within the City of Cape Town as a water scientist; looking at developing crucial systems for a city that only receives winter rains, he worked as part of a team designing and monitoring water treatment. Murendeni is now founder of Kusini Water, which has developed a mobile solar-powered water treatment system. The system uses off-waste Macadamia nut shells as Activated Carbon and a locally produced nano-membrane to produce more drinking water using renewable energy than the current ‘best practice’ of Reverse Osmosis. Murendeni’s vision sees Kusini Water as a ‘private utility’ company working within the heart of communities to significantly improve access to drinking water.

“No one wants to get on a stationary train. So, done is better than perfect. If we had waited for stuff to be perfect, we’d literally be nowhere,” observes Murendeni.

Okey Esse is a self-taught serial social entrepreneur who builds unrefined ideas into workable models, taking them from ‘Strategy to Sustainability.’ He has 16 years of experience, has founded five successful tech companies, created two proprietary products, holds one patent and is franchisee of two major products across Africa – and has established himself as a valuable leader in fundraising activities. To date, Okey has raised over US$50 million for 101+ SMEs.

600 million African households rely on charcoal, firewood and kerosene for their daily cooking needs, and in the last 10 months, the cost of these cooking fuels has gone up by 50% because of increasing urbanization and deforestation. Also, the lack of efficient cooking stoves has worsened the situation, as these families burn more cooking fuels than is necessary over an open fire. The inefficient combustion from these devices makes them emit tons of toxic smoke that kills 600,000 Africans annually.

Powerstove Energy designs, manufactures and distributes a low-cost, smokeless clean cookstove that uses 70% less biomass to cook food 5x faster than traditional stoves while self-generating 50 watts of electricity for the user’s household. The Powerstove is the first clean cookstove with patented built-in self-powered IoT system which allows users to enjoy pay-as-you-cook financing, making it possible for poorer families to afford the stove through monthly installment payments. Their devices also allow users to receive funds directly into their mobile money account based on their continued usage of the Powerstove. In addition, they produce biomass pellets from household, agricultural and wood wastes which cost 80% less than firewood, charcoal and kerosene and cook foods for twice as long (without smoke) than any available biomass fuel. Hence saving each user $300 annually.

“We have an ambitious vision that, by the time we celebrate our five year anniversary, we should have five million households using our products. So, at that fifth anniversary we want to be in six countries in sub-Saharan Africa, with presence in east Africa, west Africa and southern Africa. Then we also want to be the number one company using blockchain technology to finance clean cookstove adoption. We are pioneers in the clean cooking stove industry, so we want to remain pioneers to ensure we make our mark in that sector,’’ said Okey at an interview with Global Entrepreneurship Network.

Roy is currently pursuing his master’s degree in Information Systems. He is also a Mowgli Mentor – a 1-year mentoring program aimed at driving the personal and professional development of innovators and entrepreneurs in Nairobi, Kisumu and Mombasa, all in Kenya. Roy has already built a career spanning all aspects of technology marketing within the Telco industry. He has held roles in Brand Marketing, Digital Marketing, Product Marketing, Segmentation and Insights, as well as Product Innovation. He previously worked at Safaricom PLC where his experience covered both the Consumer and Enterprise Segments, and successfully rolled out various brand campaigns, as well as telco, and digital financial services (DFS) products. Currently he is working relentlessly and tirelessly on Digiduka.

Digiduka is a digital payment services provider on a mission to bring informal retailers in Africa into the digital economy by providing them with digital financial services and social commerce solutions. It initially focused on building up the underlying digital payments rails that are needed as a first step to getting informal stores online. The startup provides a wallet that allows retailers to collect mobile money and bank payments via mobile app or USSD shortcode, eliminating the high mobile money transaction fees and encouraging both merchants and end users to stop using cash.

Roy Njoka, who co-founded the business alongside Lovell Larbie, told Disrupt Africa that, once Digiduka has put those rails in place it will move on to creating new revenue streams for the merchants it serves. Firstly, it will help them resell digital services. “Most shops in Africa already sell prepaid scratch cards in physical format, and our platform turns these into digital vouchers. We are also introducing new digital inventory such as bill payments, and bus ticketing,” he said. The end goal is to provide them with an online storefront. “This is a social commerce platform that allows shops to automatically launch a digital storefront on multiple social platforms such as Facebook Shop, Instagram Shop or WhatsApp Chatbot where they can sell their products. This is an end-to-end Shopify-like solution that handles inventory management, payments and deliveries,” Njoka said.

“We are currently active in Kenya, with 80 per cent of our users in Nairobi, and we have plans to recruit users across other counties in Kenya. We also have plans to expand to other African countries where we see a similar opportunity, such as Ghana – where Lovell is from – as well as Tanzania, Uganda, Rwanda and Ethiopia, in the next three years.”

Luuk is a business leader and entrepreneur with a proven track-record in innovation and technology across multiple industries and continents. Luuk draws on vast experience with each stage of innovation, from inception to product launch, and has guided hundreds of startups and corporate clients to growth and investment. No stranger to the hard work and occasional let-downs that come with the terrain, Luuk is from the school of thought that believes entrepreneurship is not for everybody.

“Everybody wants to be an entrepreneur – but that’s a big mistake, it’s not fun, you’re better off not being one,” said Luuk in a recent interview.

Nevertheless, he has been a savior to many, and has helped build new ventures in industries including: Enterprise Software, MedTech, New Retail, Automotive and FinTech. Relevant technology areas include Artificial Intelligence, Blockchain, Big Data and AR/VR as well as hardware innovation based on CPU, Movidius & FPGAs.

Currently, Luuk is the Chief Commercial Officer at XNode, a Chinese-Global platform for innovation – '全球创新 中国引擎' – where he is on a mission to help entrepreneurs and innovators to build companies with a positive global impact.

Hosted by EqualOcean, the World Innovators Meet (WIM) is a world-class event for innovators. It provides limitless opportunities to learn from and connect with the most sought-after technology pioneers.

The World Innovation Awards (WIA) are announced at WIM to recognize game-changers across various industries and geographies. Selected by a committee of distinguished experts, entrepreneurs and investors, WIA are designed to acknowledge technology disruptors striving to make a positive impact. 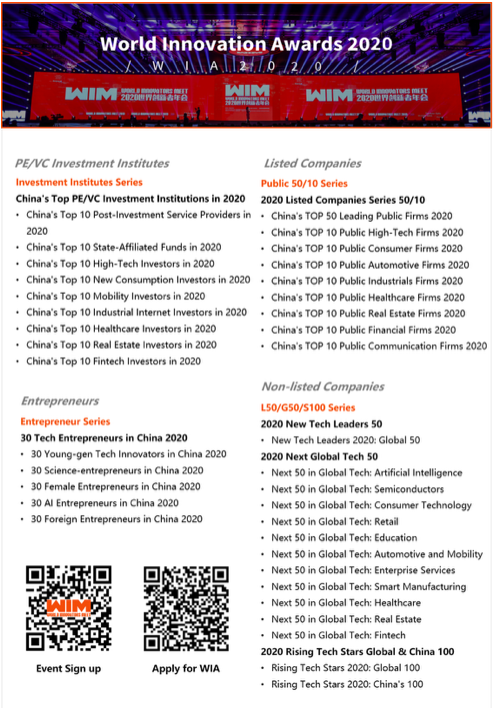 Register for the event

[Global Trends] Key insights from 11 Industry and Overseas Chapters made available to you for all three days of WIM2020.

[Insightful Conversation] Connect with 120 top-notch global speakers, listen to their perspectives and interact with them online.

[Innovative Community] Join an exclusive network of 10,000 professionals to participate in discussions and gain first-hand information from fellow participants.

[Comprehensive Report] Exclusive in-depth research reports will be delivered right to your mailbox.

Join the WIM2020 family and become a member of the World Innovation Community, participating in a technology and innovation carnival that connects the world right at your doorstep, all while drawing a special end to the extraordinary 2020!

If you would like to become/recommend a speaker, discuss cooperation opportunities or media partnerships, apply for the World Innovators Awards or to be a volunteer, please click here to fill in the WIM2020 Cooperation Form (we recommend you to do so on a computer). We will be in touch as soon as possible. Thank you and welcome!