On Dec 9, the World Innovator Meet went fully online for the first time. To connect the world in the name of technological innovation, WIM invited rising stars from Asia, Africa, Europe and North America to share their insights on innovation and their practices around it – pursuing it and sustaining it – as they each strive to further equality through technology. 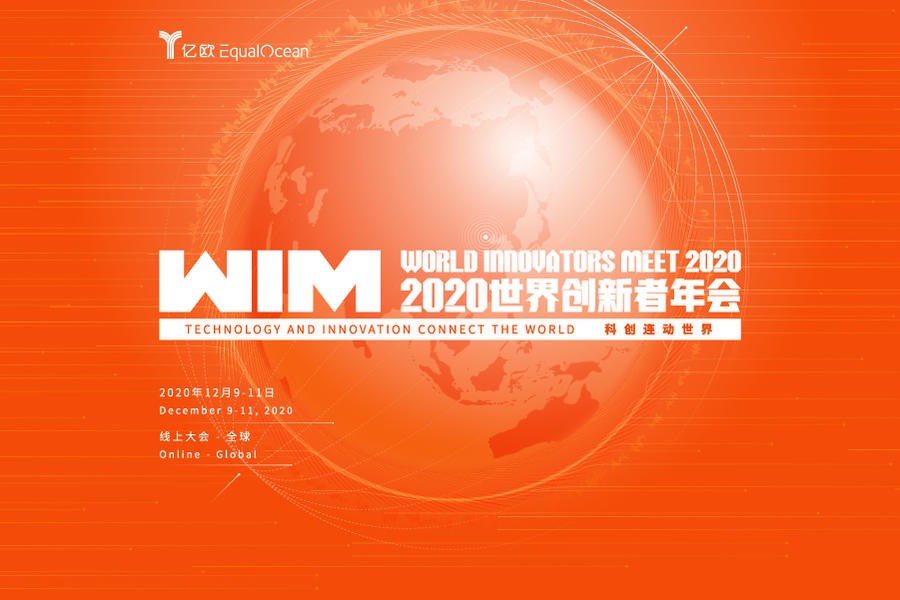 On December 9-12, EqualOcean is holding the World Innovators Meet (WIM) 2020. This year, the event's main topic is 'Technology and Innovation Connect the World.' WIM2020 gathers innovators from Asia, Africa, Europe and the Americas to share their knowledge and key achievements, promoting the concept of 'Tech for Equal.'

On the morning of Dec 9, leading figures from various industries showed up for the chapter on Technology and Innovation Leadership, sharing their thoughts on the development trajectory of the post-pandemic global economic system, especially the risks and the opportunities contained therein.

In spite of the difficulties of the time, opportunities for innovation are springing up. We wish SME innovators could keep their ambition and courage for innovation.

The outbreak of the COVID-19 crisis caused a huge blow to the global economy, which makes it a difficult time for all innovators – one almost without precedent. In his speech, Yuanpu Huang, the CEO of EqualOcean, said that it has become more difficult for innovators to challenge giant companies. The tech giants are so dominant that they can acquire innovative SME with their capital when they are faced with challenges. This not only blocks the development of innovation, but also threatens the public interest.

Nevertheless, to stimulate the innovation of SMEs, both China and US have started taking measures to curb monopolies. The pandemic also has raised people’s concerns and caused them to rethink the government’s role in economic development and social development. Paul Romer, co-recipient of the Nobel Memorial Prize in Economic Sciences in 2018, spoke highly of China’s efforts at pandemic prevention in his speech. He believes that the Chinese government and other Asian governments stand out among other countries through their show of effort. He also predicted that Western governments will learn how to provide goods for society and apply important lessons as they boost up their economies. Despite the controversies over the past years, the crisis has raised people’s awareness of the necessity of the government intervention. According to Romer, we need vibrant markets and a strong government to make progress. He considered China as one of the countries with most growth potential in the next decade.

The COVID-19 crisis has brought many challenges, but also opportunities. Jianguo Wei, the Vice President of the China Center for International Economic Exchanges, Former Vice Minister of the Ministry of Commerce, suggested in his speech that the focus of the service sector and high-end manufacturing industry will move to the East, as China has the most complete manufacturing industry chain in the world. Alongside the industry movement, there will be flows of technology, talent and capital. Furthermore, more tech companies will move their headquarters to China as a result. Wei Li, the Chairman & Founding Partner of GPCP, Standing Committee of Shenzhen PCC, believes that China has passed the factor-driven stage and investment-driven stage, on the way to innovation-driven stage. Therefore, technological innovation will become the core of driving forces over the next few years. Opportunities are rising in different areas, such as domestic production and new infrastructure – including IT and the consumption industry, including healthcare. Christine Tsai, the CEO and founding partner of 500 Startups, suggested that under the impact of the pandemic, there are new opportunities. The COVID-19 spread has caused crisis in the healthcare industry, with the result that innovation is needed to satisfy people’s fundamental needs. Such opportunities are also springing up in the areas of education, office work and logistics. Yang Yao, the Dean of National School of Development at Peking University, said that China has made great progress in technological development. He also indicated that Shenzhen is likely to take the place of Silicon Valley to become the largest innovation center in the world in two or three decades.

Global Horizon Based in China According to Xuan Tian, the associate dean of finance at PBC School of Finance, Tsinghua University, the competition for technological innovation depends on the talents, which comes down to the education. Tian suggests that personalized training of innovative talents encourages critical thinking and includes trial and error. 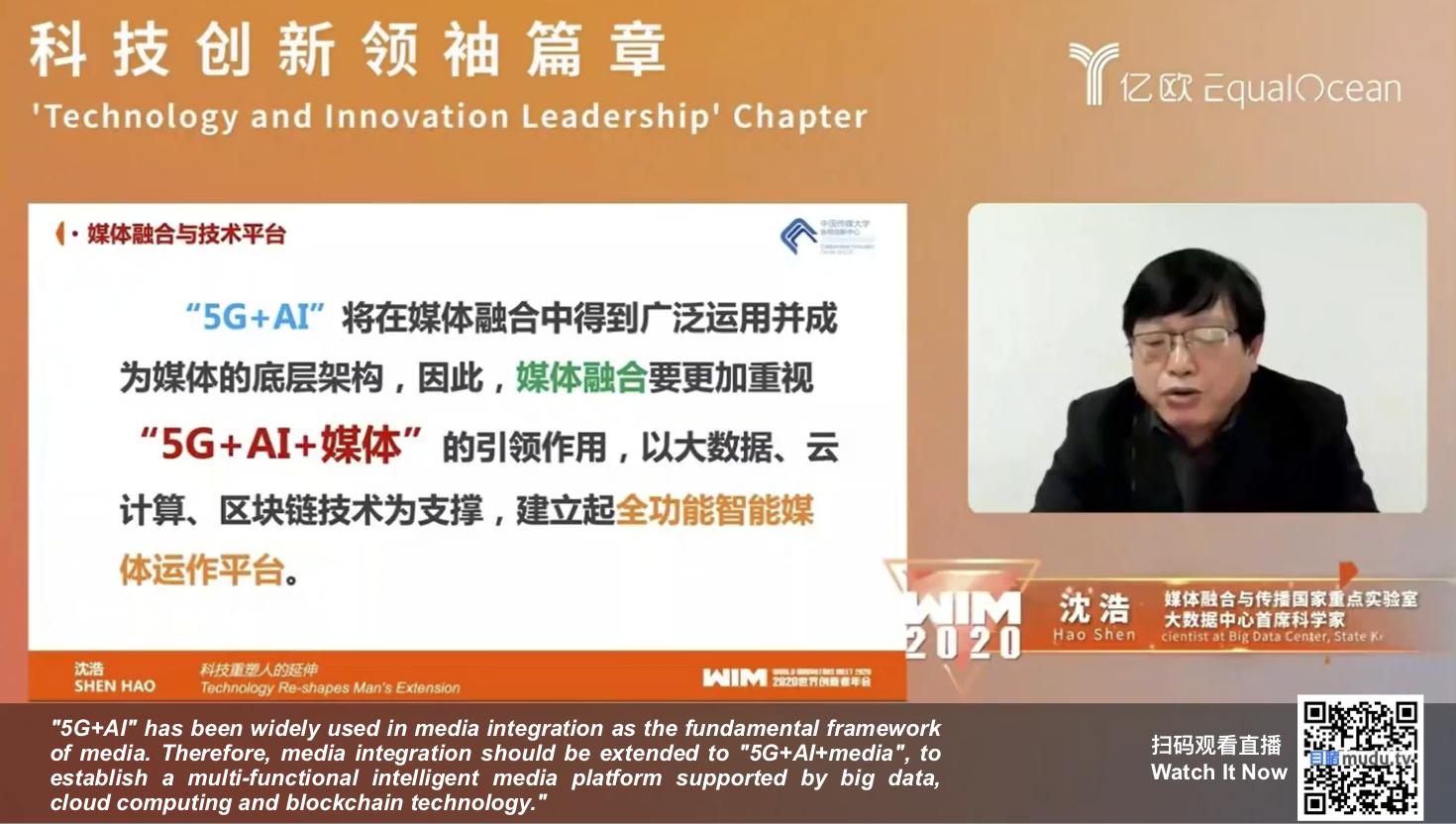 Hao Shen, the Chief Scientist at Big Data Center, State Key Lab of Media Integration and Communications, said that when technology is married to the media, people are able to know what happens in the four corners of the world. Thanks to technology, innovators from different countries gather at WIM, having a global conversation.

Foresight on the outlook of technology

During WIM2020, the WIM Committee will release the annual blockbuster WIA list (World Innovation Awards) based on the analyses and findings of industry and investment research, along with a series of research reports, including China’s and the world’s top listed companies, non-listed companies, investment institutes, and entrepreneurs to recognize game-changers across industries and geographies.

Compared with last year, WIA2020 is upgraded with primary market and secondary market included, while still sticking to a global horizon and the focus on global innovative firms. 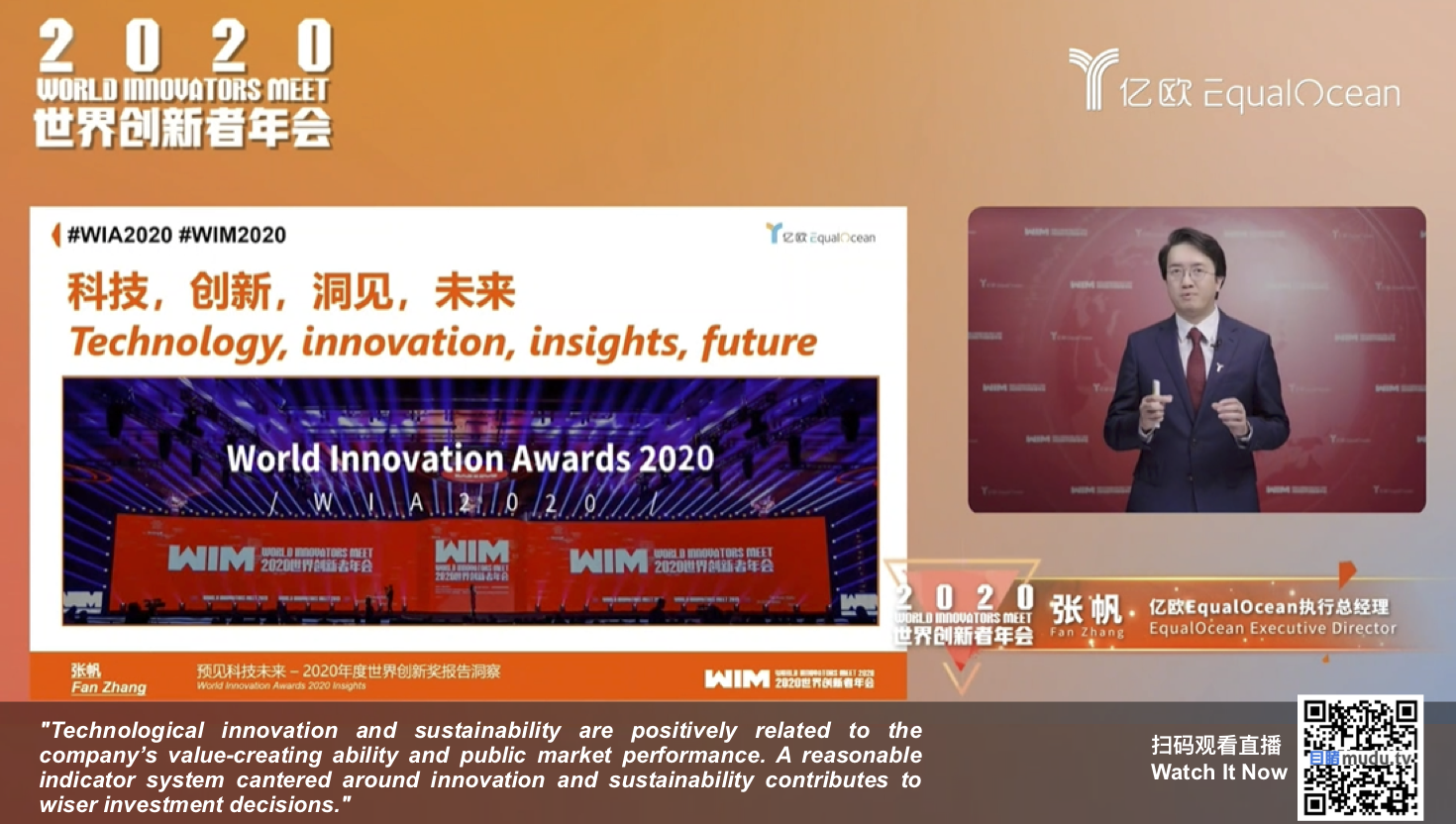 Fan Zhang, the Executive Director of EqualOcean, believes that technological innovation and sustainability are positively correlated to a company’s value-creating ability and public market performance. A reasonable index system centered around innovation and sustainability contributes to wiser investment decisions. There is no doubt that there will be more innovative enterprises rising in the ever-changing world, which can possibly be found in the lists of WIA2020.