This article aims to guide you throng some basic knowledge about China NEV Market. 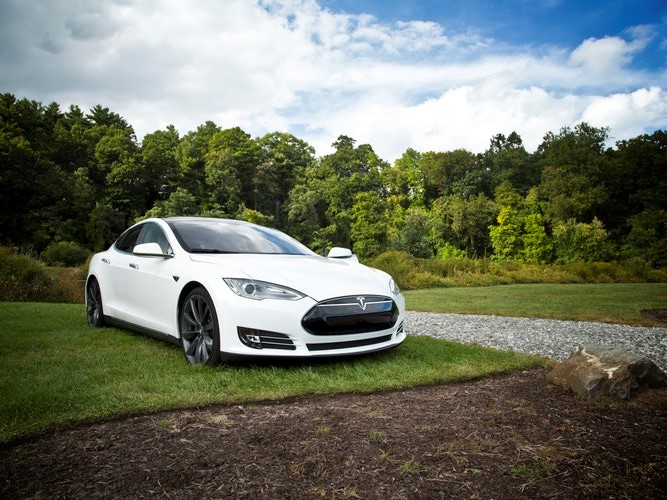 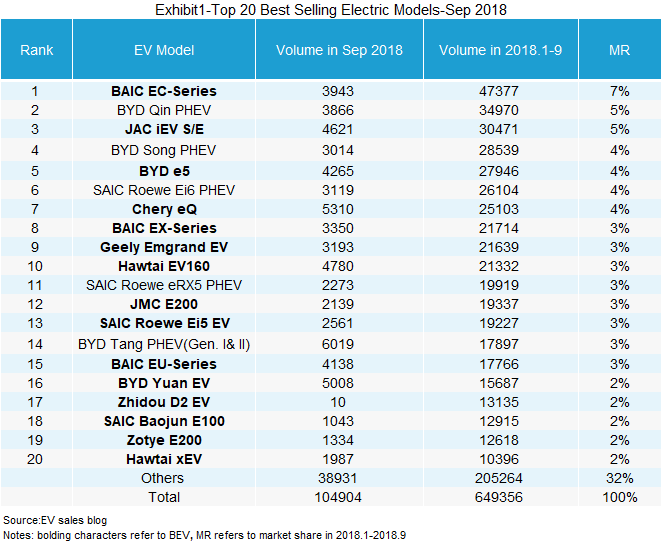 This is a highly protected market with no foreign brands amongst the TOP 20 list, also reflecting the domestic market is more than enough to absorb the current production. According to EV Sales, in September 2018, the total market share of foreign brands is 6%, of this small cake, 2% (or 33.33% of it) belongs to Tesla, and 2% (33.33%) to BMW, with the remaining 2% (33.33%) divided by all other automakers. It is noticeable that there is a sharp decrease of Tesla (-84% YoY) in September, due to the tariff war between US and China.

Looking into 2018, With the Chinese and the global editions of the 2017 Best Selling PEV award in its hands, the BAIC EC-Series has kept its pace in 2018, becoming the #1 on the list. However, EC-series has been actually suffering since June 2018(See Exhibit 1).

As we mentioned above, the Chinese Government implemented a new EV subsidy policy on the 12th of June 2018, decreasing significantly subsidies on EVs with a range from 150km to 200 km (exactly the range where EC-Series fell on), EC-Series sales dropped since then, with 3 units sold in June, 500 July, and finally bounced back to 3028 units in August, but far behind before. Thanks to EC3 coming out at the end of August, the sales continued growing to 3,943 owing to its improved specs (with 261 km or 162 miles of range) and competitive price (65,800 yuan or $9,448 after subsidies). 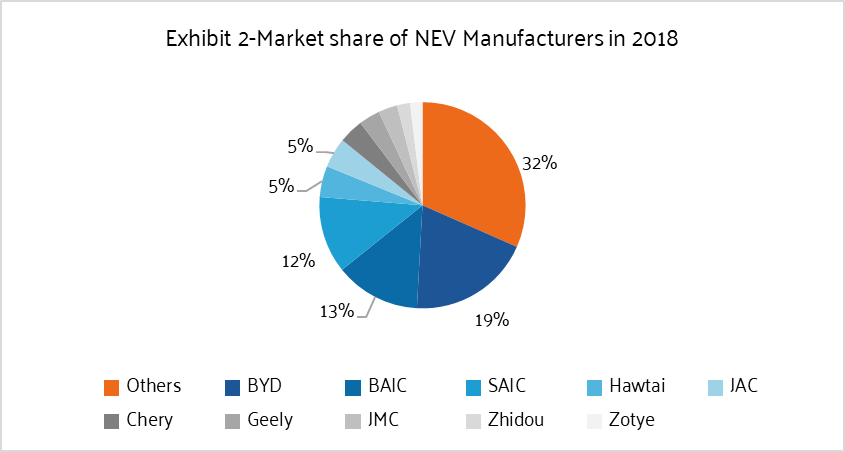 Looking at the manufacturers ranking, BYD (19% ) is comfortable at the throne, thanks to the Qin PHEV and Song PHEV. In the second place, we have BAIC (13%) , keeping the runner-up SAIC (12%, up 1%) at a dangerous distance(See Exhibit 2).

The EV market is adjusting the structure

China’s EV market has seen great and rapid growth due to the subsidy policy, increased access to HOV(High-occupancy vehicle lane) lanes and expedited license plate acquisitions, we will discuss the subsidy policy in another serial paper, now we will focus latter, which is a very special kind of incentives existed in China.

Unlike America or any other European countries, it is time-consuming and expensive to get a license in China, for example, in Shanghai, RMB 100 thousand ($15,900) is charged for a license plate. But for the owners of EVs, things are different, they can get their license more quickly and without paying the typical fees at the same time, which made buying an EV is more attractive for Chinese consumers.

As a result, according to a report by Bloomberg New Energy Finance, six Chinese cities that implemented gasoline-car restrictions accounted for 40 percent of the nation’s electric-car sales of 579,000 last year and 21 percent of the world’s EV sales, Sales in Beijing, Shanghai, Shenzhen, Tianjin, Hangzhou and Guangzhou are increasing by two to four times the national average. No wonder why A00 sedan takes such a huge proportion in China EV market now(See Exhibit 3). Due to its cheap price, buying an A00 sedan seems to be a good choice to seize the opportunities offered by the Chinese government for consumers.

Take a classical A00 sedan Zhidou D2 EV for example, scoring 13,135 units at the end of September in 2018, was once one of the most successful tiny cars, only sold pathetic 10 units in the record month.

To compare Zhidou D2 EV and BAIC EC-Series, both belong to A00 segments and crossing a sales drought due to the removal incentives. When facing the challenge, the respective manufacturers reacted differently. BAIC is 60% owned by the Chinese Government, decided to catch up the subsidies by offering an improved-range EC3 EV(A0 sedan). On the other hand, Zhidou, with no obvious counterplan coming up yet and recently was trapped into layoffs and debt risks.

As Beijing is scaling back subsidies to push automakers to focus more on technological improvements instead of relying on fiscal policy earlier this year, it is likely that the structure of EV market will be adjusted closely to traditional ICE-dominant market, with a shrinking share of A00 sedan.

CONTACT US
Scan QR code to contact us for professional consulting services
Next article
Uber Quit, Will TuSimple Succeed?