Red, An Instagram-like Social Media Platform with An Amazon-like Marketplace

Red, a Chinese start-up with less than 6 years of operating history has gained over 200 million users and 45 million MAU. Now how will Red monetize its user base through e-commerce and can it compete with Alibaba and JD.com? 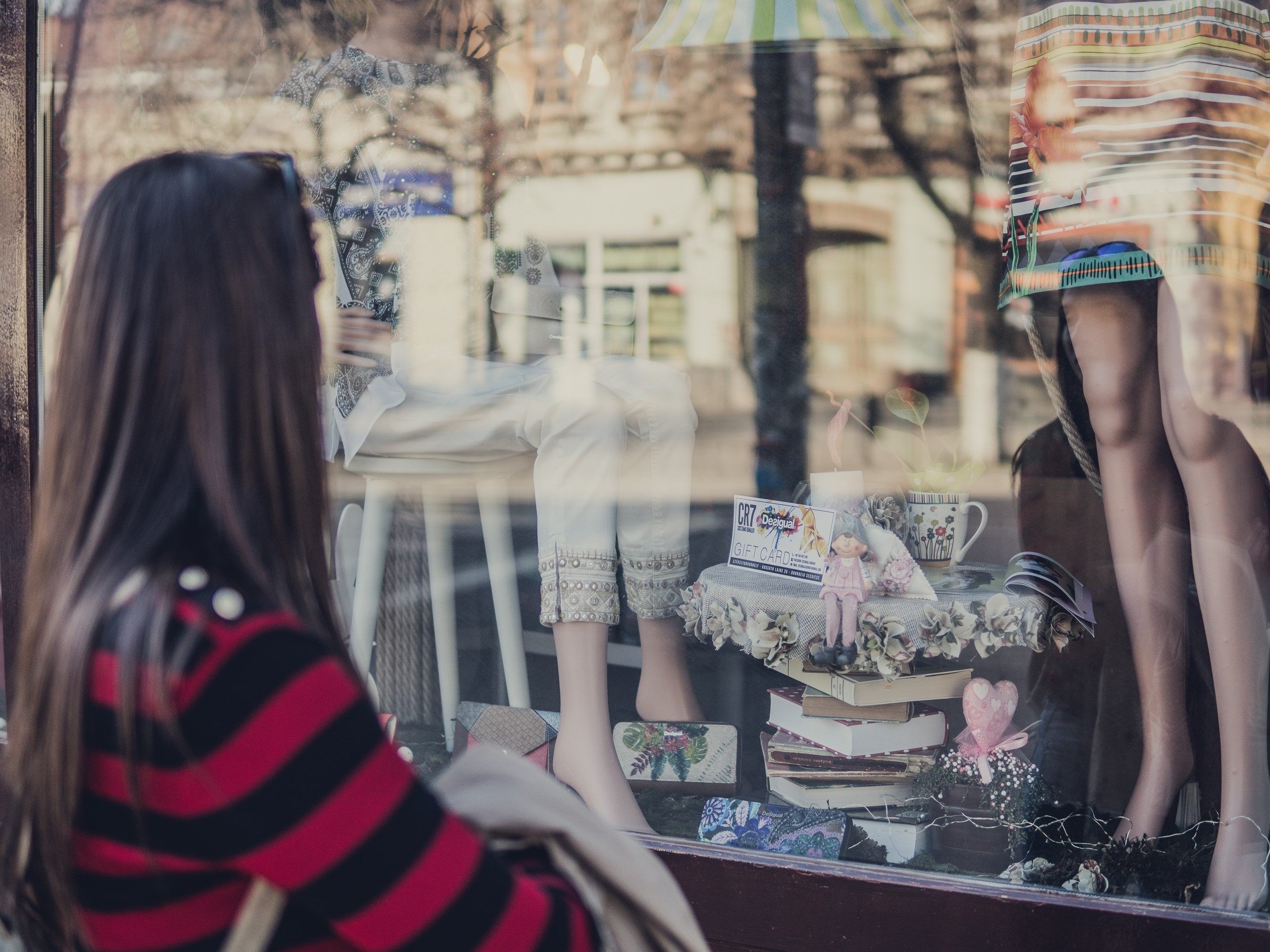 We are initiating coverage of Red (also known as Xiaohongshu, 小红书) with a Strong rating. Founded in 2013 by MAO Wenchao (毛文超) and QU Fang (瞿芳), this young Chinese company has less than six years of operating history yet has over 200 million users, approximately 45 million MAU and a valuation of more than USD 3 billion. Red’s distinctive business model combines an Instagram-like social media platform with an Amazon-like marketplace. So far, the social and e-commerce features available on Red are difficult for competitors to replicate.

80% of active Red users are women and Red’s primary customer base consists of young females between the ages of 18 and 35. Using texts, pictures, and short videos, Red users create original content, primarily sharing reviews on merchandise they purchased. Users view billions of posts about cosmetics, apparel, food, traveling and home decor on a daily basis. From how to lose weight, to how to celebrate Valentine’s Day, to which wedding dress to pick, the articles draw millennials actively seeking out peer recommendations.

While the social media platform is the main user acquisition tool, Red’s e-commerce store serves as the primary monetization channel. In 2014, the business started to import overseas products favored by its users to sell through Red. After a year, it introduced third-party stores, in turn increasing product offerings. As of March 2019, Red sells more than 200,000 SKU (up from 10,000 two years ago) mostly consisting of overseas skincare products and women’s and kids’ apparel and accessories. The company is still at an early stage of monetization but should see a trend of increasing monetization as the user scale becomes more stable and the e-commerce service more complete. 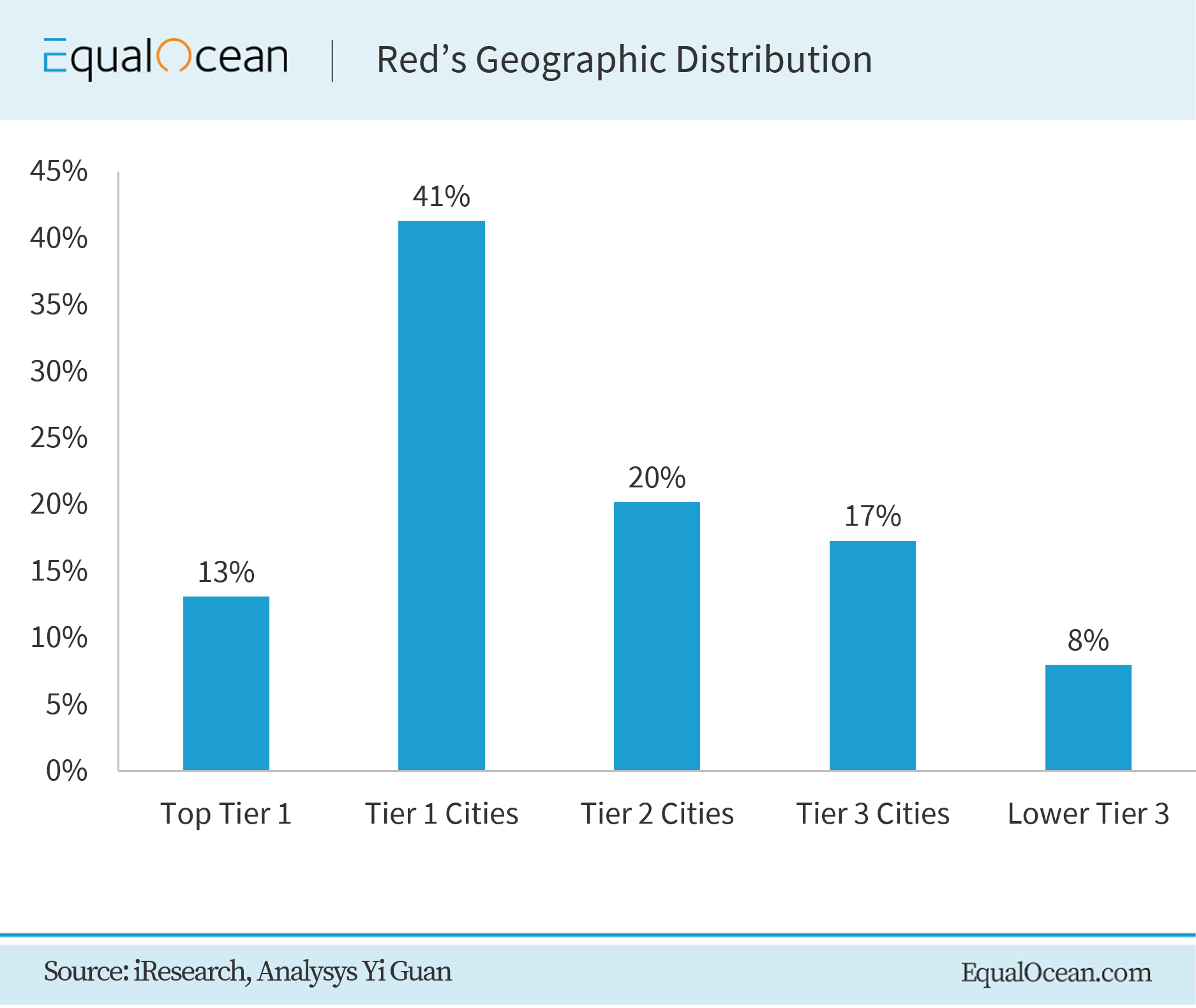 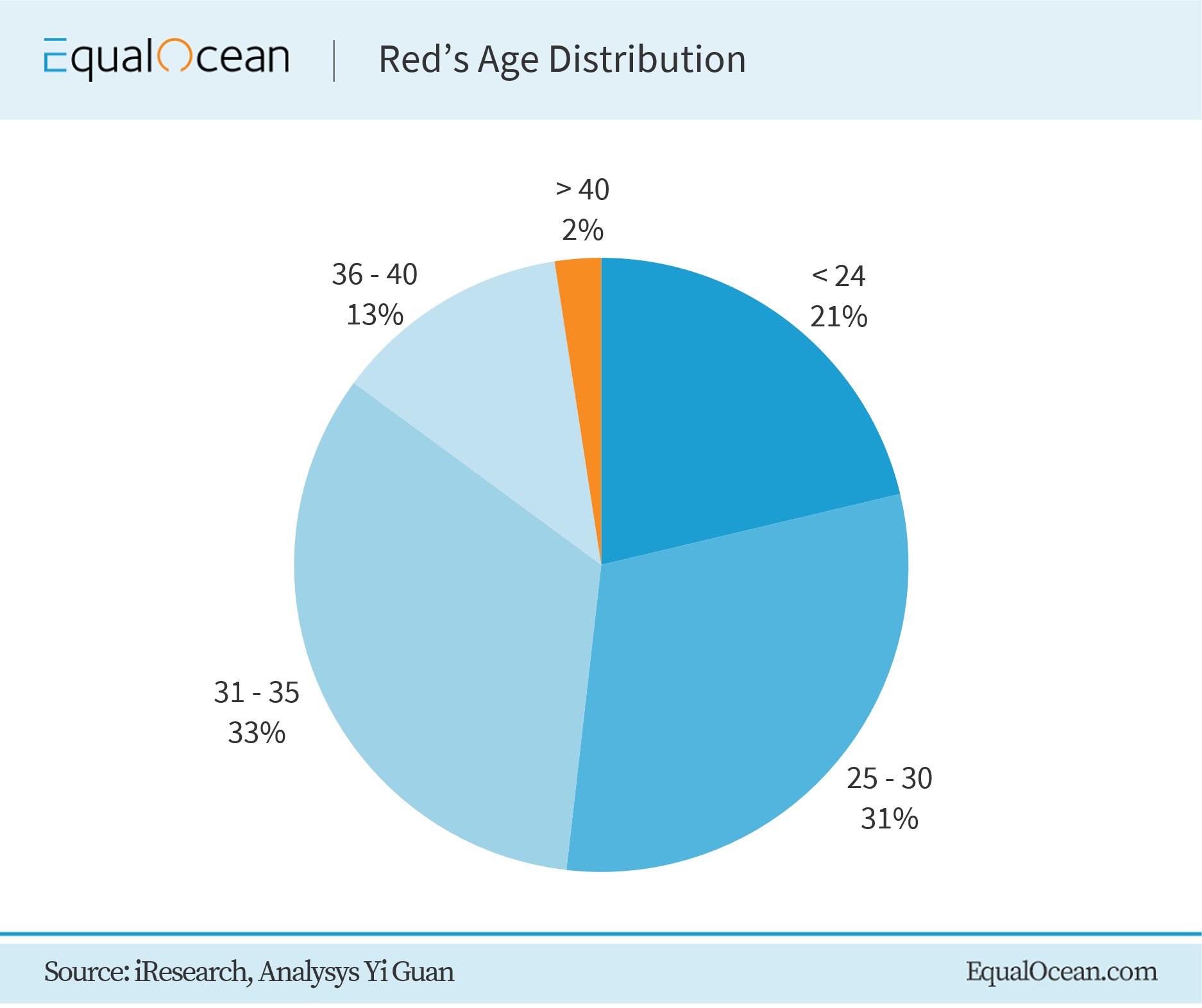 According to Analysys Yi Guan (易观), cross-border e-commerce transactions reached around USD 60 billion in 2017 growing at a CAGR of 60% from 2012 to 2016. Going in 2019, China's cross-border e-commerce market has entered a mature stage and is expected to achieve 15% growth in the next 3 years, driven by more favorable regulations, more product offerings and faster delivery time compared to other channels.

In a climate where Chinese consumers are more selective than ever, traditional advertisements and celebrity endorsements are a hard sell for consumers. Purchasing decisions are increasingly influenced by social media and especially by Key Opinion Leaders (KOL).

Red’s moat comes from the original reviews posted by real customers; content created by consumers is inherently different from commercials, and thus viewed as more reliable. Before posting reviews, users must prove that they have purchased the products they are reviewing. Posts are vetted and commercials are deleted by the app. In this way, most sharers are ordinary individuals. Those posts are viewed as an accurate and detailed way to win the most trust from users.

Women inherently value sharing, and as a consumer base, they are more incentivized to contribute detailed shopping tips on Red than other social apps including Wechat and Weibo.com. On other platforms, a behavior seen as normal on Red might be seen as bragging. Additionally, Red encourages users to share more reviews by offering reward points.

Having successfully built a vibrant and dynamic community of sharing, Red has sustained substantial MAU YOY growth of 143% to 45 million in November 2018. This number implies a ~22% penetration of its core customer group (Chinese females born between 1980 and 1999, estimated to be 200 million). Looking at other emerging Chinese lifestyle apps including Douyin (抖音), Kuaishou (快手), Toutiao (头条) and Meituan (美图), which respectively had MAU of 277mm, 196mm, 190mm and 117mm in 2018, we expect ample room for Red to grow its MAU. 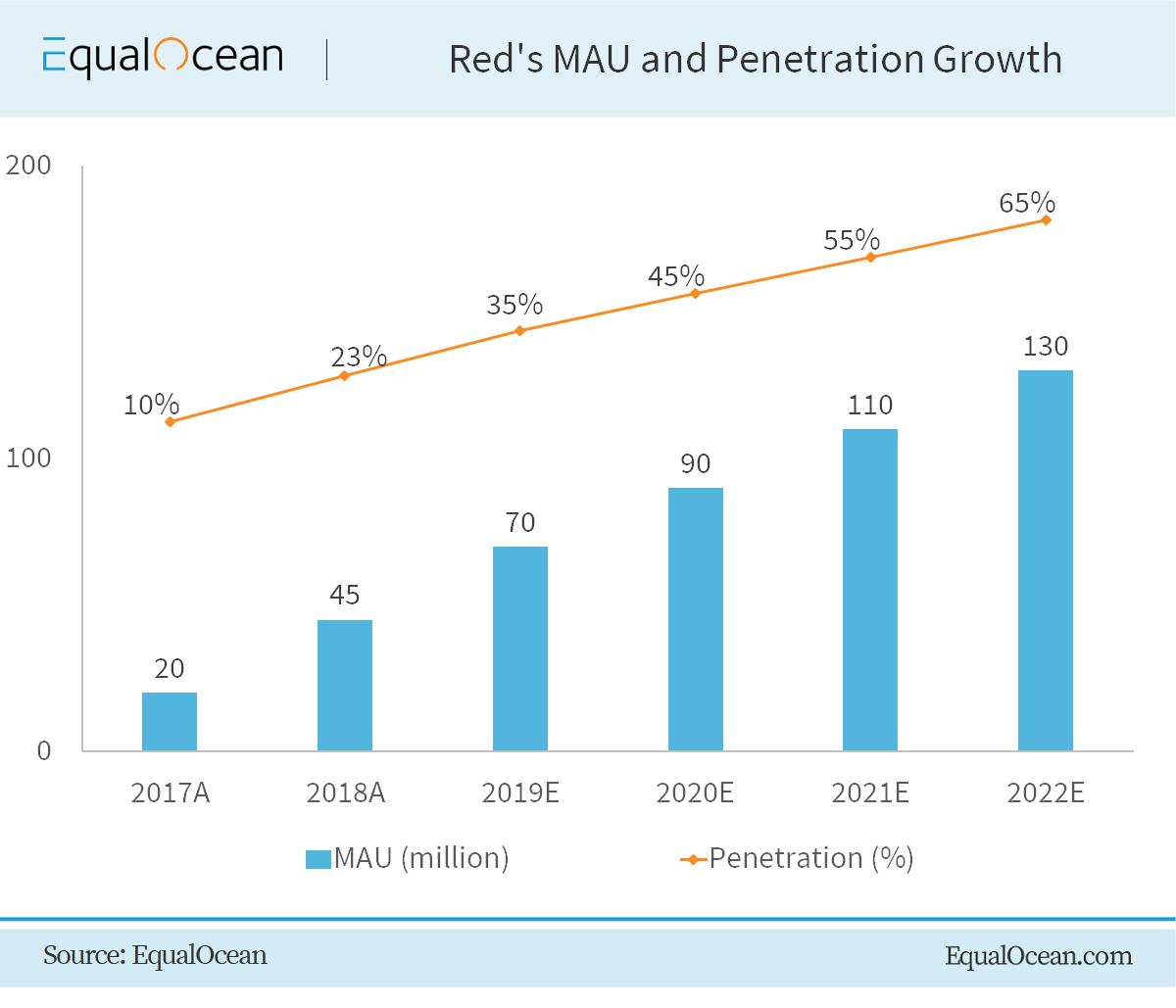 Having built large data sets through users’ views, comments, collections, follows, likes and shares, the app is able to deliver customized content through the “Explore” section. In the “Nearby” section, users can discover what other people in their neighborhoods are doing and where they are visiting. According to surveys performed by Haitong Securities, the average time spent on Red, 18.2 minutes, is significantly higher than the 9.9 minutes spent on competitor NetEase Koala. Further, after adopting the technology-driven approach, consumers began spending 150% more time on Red. We believe the recommendation and personalization systems will only get better with more users and data.

While Red does sell well-known international brands on the platform, including YSL, SK-II, and GNC, the company plans to focus more on imported niche brands to differentiate itself from major e-commerce platforms. According to NetEase, nearly 60% of customers have expressed strong interest in imported niche cosmetic brands. Further, younger customers between the ages of 18 to 26 are more willing to give it a try.

Red uses big data analytics to determine the products that their users want to own but are hard to purchase on domestic websites. Then, the company purchases such in-demand products ahead of other platforms, becoming the sole supplier of the brands. There are currently over 10,000 domestic and international brands on Red. We believe that more merchandisers, especially young brands, will begin making partnerships with Red or directly open stores on the platform. We are confident that this is the case because 1) Red allows vendors to identify their target customers and to adjust the products based on user reviews; 2) The posts on Red serve as word-of-mouth marketing, helping vendors to advertise their products effectively.

Promotion: annual sales takes place on June 6th every year and is a big boost to the annual GMV amount. In 2017 June 6th, sales exceed in RMB 100 million (USD 15 million) in the first two hours.

While Red’s social platform has a moat, e-commerce site has more challenges ahead

Fierce competition makes Red’s path to successful e-commerce challenging. We believe the main challenges for Red include the following:

1) Red must compete with larger and more mature e-commerce sites that currently take more time and money from consumers. Most customers are likely to determine which products they intend to purchase by browsing posts on Red, but ultimately complete final purchases on Tmall or JD.com for lower prices, more product offerings, and faster delivery time. Even if Red tries to focus more on niche products, it will be hard to avoid competition with bigger players.

2) Given its short operating history, Red is still largely inexperienced in e-commerce. In 2017, the consumer satisfaction rate was only one star out of five and the complaints rate was as high as 46%, according to China Business Research Institute (http://www.askci.com/). Criticisms were largely related to fake products, wrong delivery, complicated return processes, the leaking of customer information, bad customer service, and similar issues.

The management team has been patient on monetization. While many marketers eyed on the high ROI that Red might deliver, Red initially chose not to monetize through ads to protect user experience - the founding team cited the example of Wechat, Chinese social media giant which has over 1 billion MAU while still being cautious on posting display ads. After entering the e-commerce space, Red constantly balances its commerce and social components. For instance, to avoid being a pure e-commerce player like Alibaba’s Tmall or JD.com, Red does not put its commerce site, but the social site, on the home page.

Currently, there are three ways for the company to monetize:

Advertising fees: The app became an advertising venue at the end of 2018, allowing commercial posts for partner brands. The posts are tagged as ads to be distinguished from regular posts.

Within the next 2 to 3 years, we expect Red to prioritize developing great content and broadening their user base, as opposed to becoming over-commercialized. Higher MAU and user stickiness will be an important stepstone along the path to monetization. In the meantime, Red must improve their customer satisfaction ratings, as well as bring in more third-party partners and more unique products to the platform.