Medical Cloud is a potential mass solution for a nation-level healthcare infrastructure rejuvenation for China to be ready to address the upcoming and current challenges in its healthcare industry. 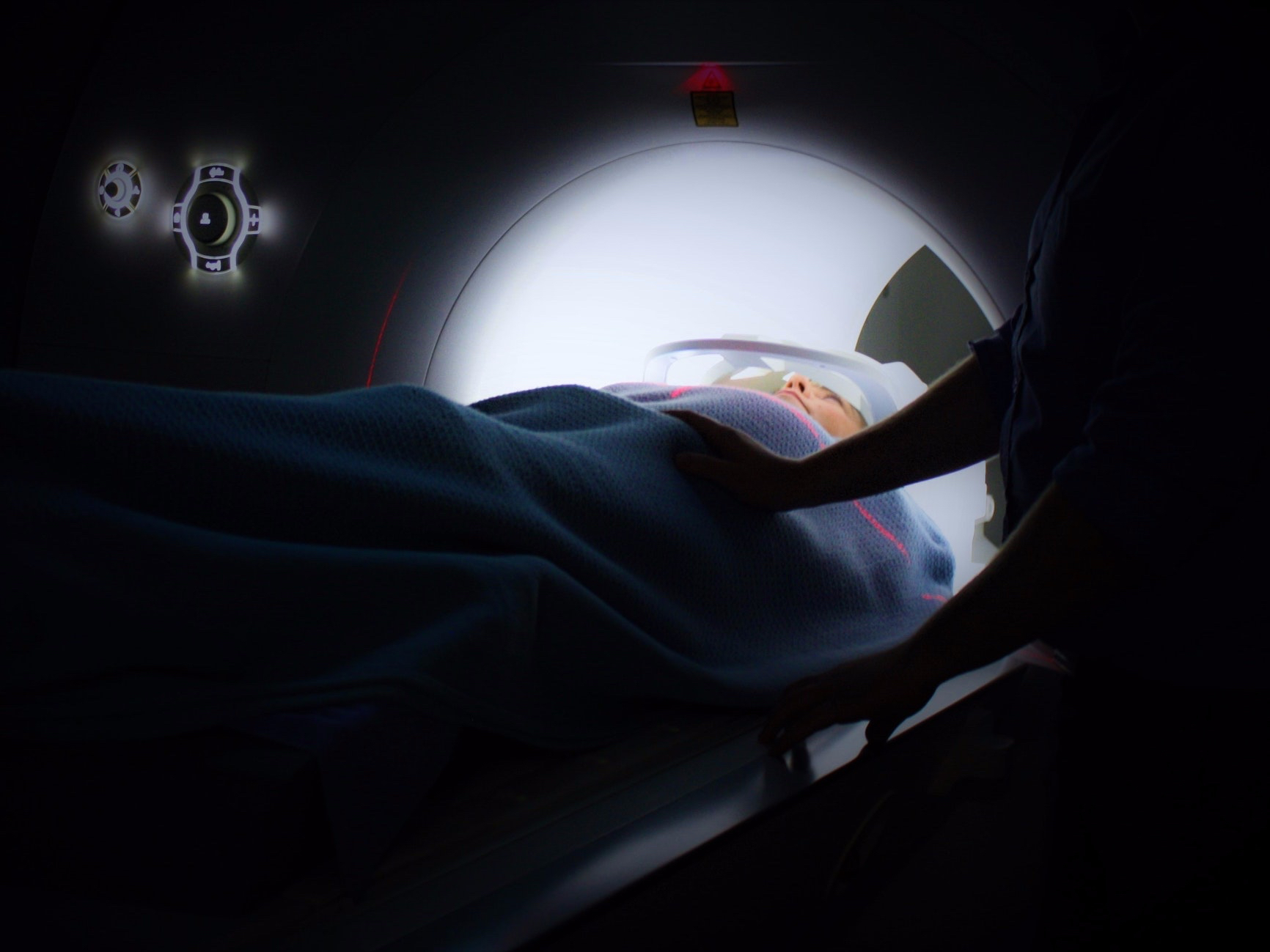 As a contentious debate topic among economists; it is still not yet known whether China will grow old before getting rich. If the Chinese population gets old and still sticks to be a middle-income economy, it will uniquely face a demographic crisis that no country has ever met before. In that case, China has to gradually revolutionize its entire healthcare, social security and pension system while providing several forms of affordable personal healthcare equipment and solutions; much more affordable than Japanese ones.

The challenges China is facing today is as arduous as it will be facing in the second half of the 21st century. In terms of the healthcare facilities and human capital, contemporary China has a serious health disparity between urban and rural. While 3.92 licensed physicians serve for 1,000 citizens in the urban areas, 1.59 physicians serve for every 1,000 citizens in the rural; equivalent to almost 1.5 times human capacity difference.

A Medical Cloud is a cloud computing service used by health care providers for storing, maintaining, extracting, transferring and backing up personal health information (PHI). Medical Cloud particularly provides healthcare applications in Medical Imaging, Diagnostic Decision Making, Telemedicine, Video-cloud and Medical Collaboration Solutions. The technology has a capacity to convey the healthcare services and facilities from urban to rural via big-data collaboration and various forms of a cloud application. Medical Cloud is a potential mass solution for a nation-level healthcare infrastructure rejuvenation for China to be ready to address the upcoming and current challenges in its healthcare industry.

Deep-dive Into the Structural Healthcare Problems in China 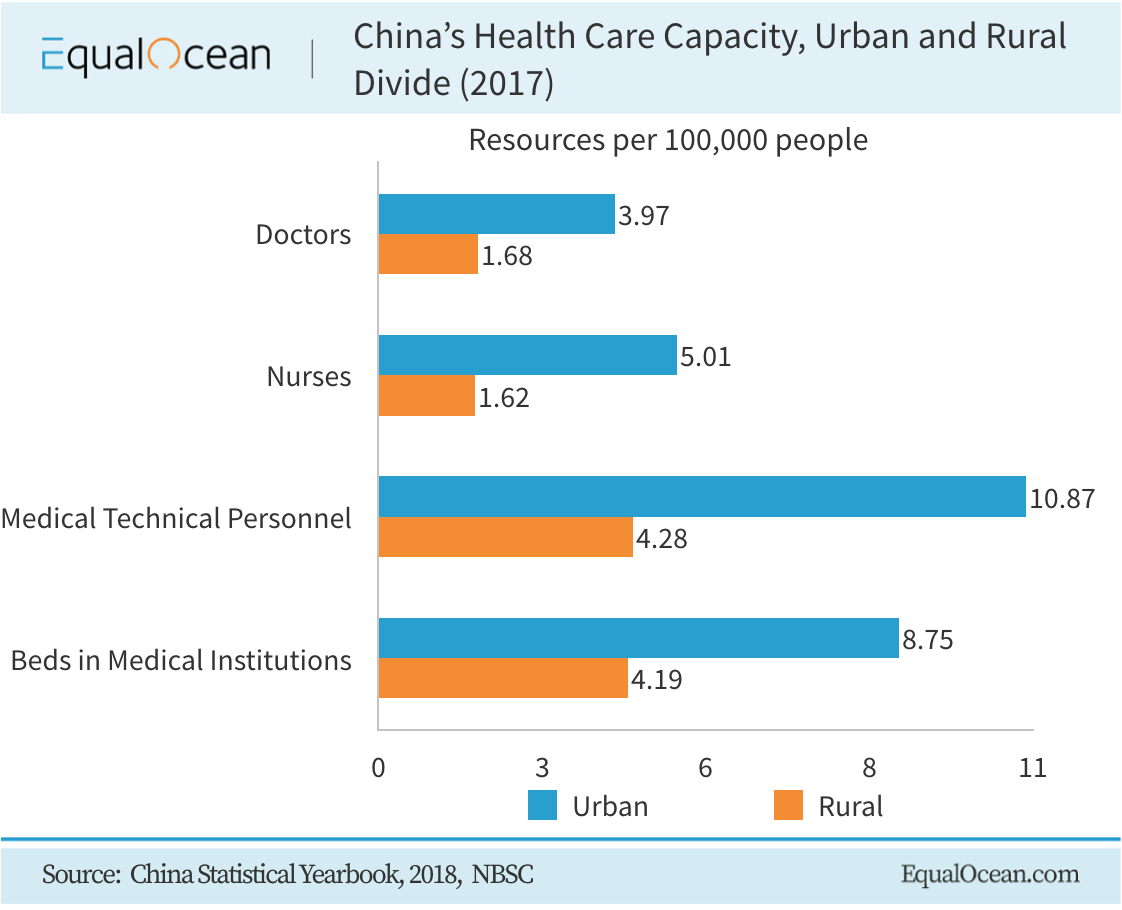 The most explicit problem in China is its very problematic urban and rural healthcare capacity difference. Based on the data provided by the National Bureau of Statistics of China (NBSC), the healthcare capacity difference is in both human capital and physical facilities aspects; the disparity is between double to three-fold. NBSC reveals that 576 million people are residing in the rural areas of China; which means, 576 million people enjoying and benefiting 2-3 fold fewer facilities and resources than the rest 813 million people that are residing in the urban areas. Moreover, to what extent Chinese urban residents benefit from the healthcare and social security system is an arguable topic, as well.  Naturally, the disparity results in a disastrous mortality and life expectancy differences between rural and urban. It should be noted that while 27.5 physicians are serving for every 10,000 people in the USA, the number is only 13.5 in China. One can see not only between-regional problems but also national issues in the healthcare of  China. 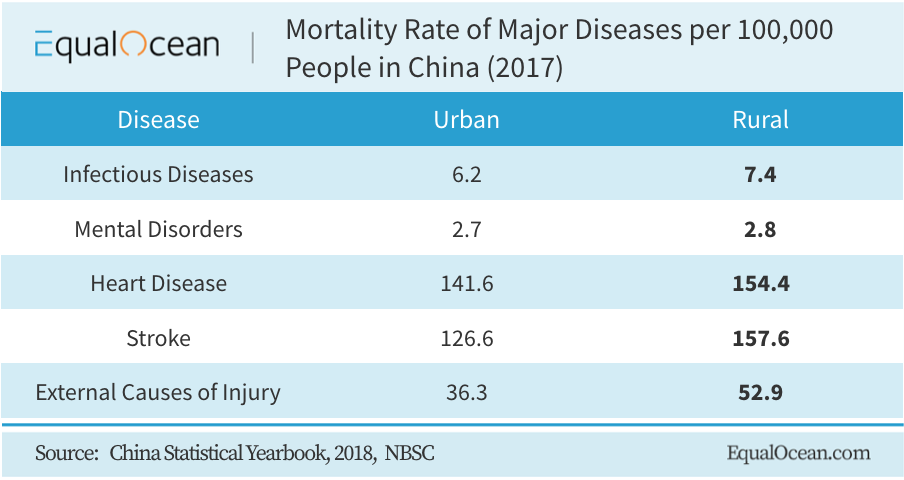 Mentioning the rural and urban disparities, it should be noted and elaborated on that although healthcare in urban areas is much more effective than rural; it has still several challenges keeping the Chinese healthcare system lagged as a whole. 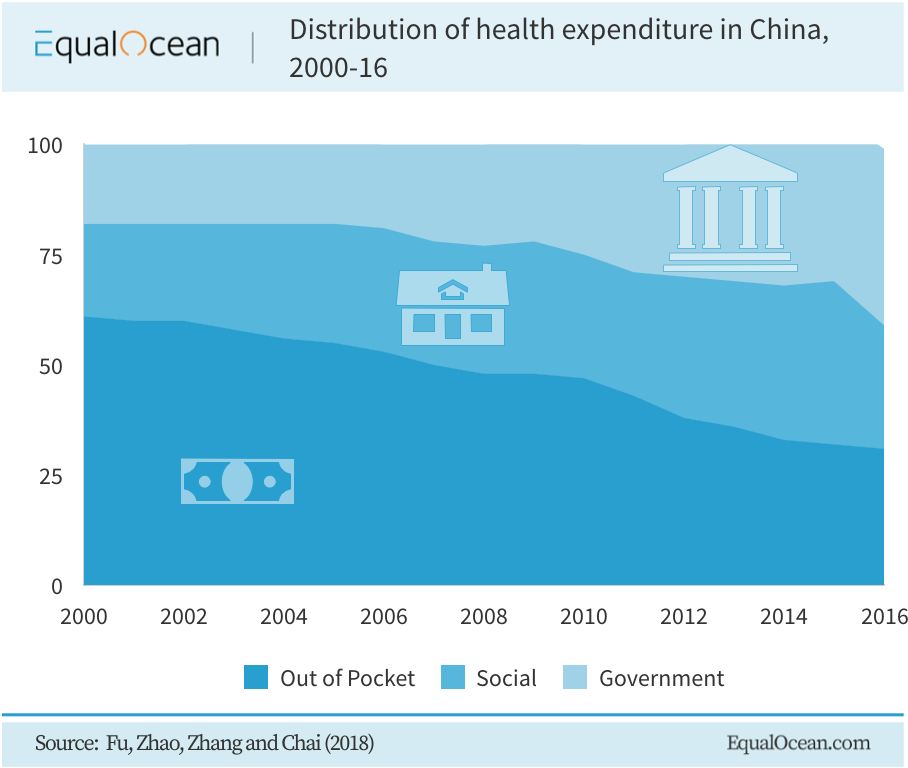 Out-of-pocket costs are seen as a major problem in China’s healthcare system. Nevertheless, the Chinese system has been progressing impressively compare to its near past; during the last 17 years, out-of-pocket costs nearly halved and replaced with social and governmental benefits, compensations and expenditures. However, the Chinese system is still far from being social-friendly compare to developed economies. In 2015, out-of-pocket spendings corresponded to 32% of the heart expenditures in China; while the share is 11% and 13% in the USA and Japan respectively. It is another aspect to explain why Chinese healthcare system is not mature enough to handle an old population. 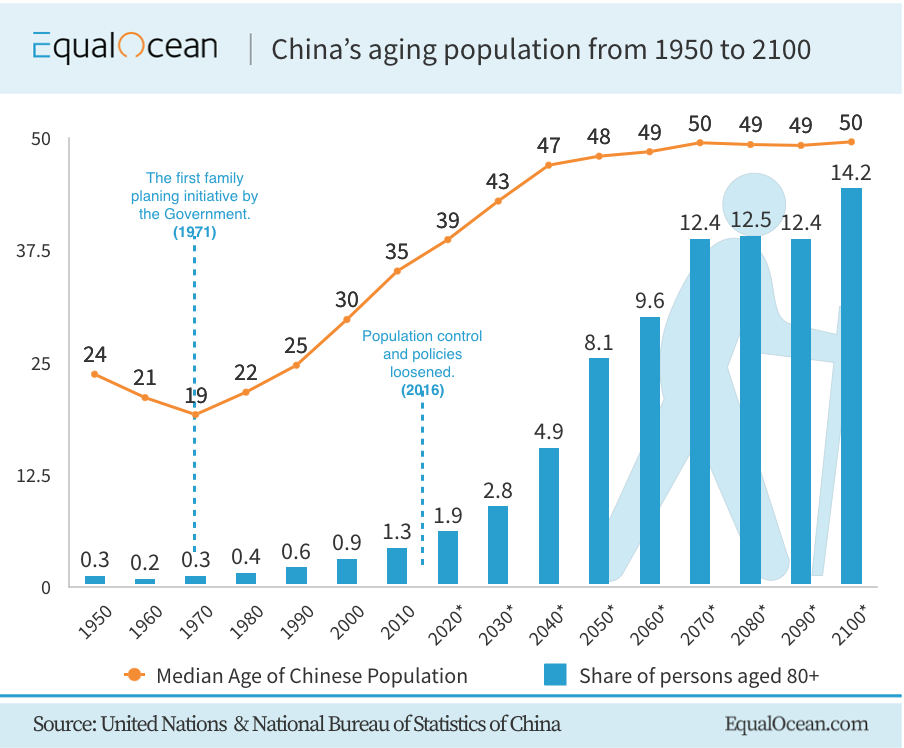 The structural problems in China’s healthcare system will be multiplied and severely deteriorated as its population grow old. Especially, the second half of the 21st century will be a hard landing for China’s economy with around 150 million people older than 80 years old. A major demographic tsunami is approaching towards Chinese society, and time is against the Chinese Government to transform its infrastructure to these paradigm changes in its economy.

China should not only provide political solutions to the problem, but also there need to be technical upgradings in the entire infrastructure.

Applications of Medical Cloud in China

Medical Cloud could potentially transmit the excess technical and human capacity from urban areas to rural which can alleviate and soften the problematic healthcare structure in China.

Medical Imaging sharing is one of the most prominent solutions that will be utilized with Medical Cloud in China. Medical Imaging includes storage, sharing and collaboration of the image reading by the experts and doctors no matter where the patient is physically located. By the use of 5G, it is also possible to share real-time MI and MRI with the doctors all around the world, regardless of where the patient is. For China; it will give another chance for the patients in rural areas to get use of the doctors’ expertise in the urban areas. The only high cost of barrier will be deploying MI and MRI devices in rural areas; however, the financial costs are the secondary problems in China compared to the human capital problem. Although they are incentivized for working in rural areas, Chinese doctors and medical personnel generally do not want to work in the rural. Medical Imaging reading is especially a high-tech medical process needs well-cultivated personnel. Medical cloud is highly prospective in this respect. 12 Sigma (图玛深维) and United Imaging (联影医疗) are providing the pioneering tech in this field.

Cloud-Based Electrocardiography (ECG) can provide interoperability between mobile and fixed devices by sharing ECG data that are coming from the wearable mobile healthcare devices. The other aspect is; it gives a historical perspective for the doctor to evaluate the patient’s hearth performance.

Heart problems are the number-one cause of death in China. Reasons like air-pollution, smoking and unhealthy urban environment further trigger the problem. Any solution that targets the cardiovascular health of Chinese people will have significant beneficial effects on a macro scale.

Medtrum (移宇科技) has several advanced solutions in addressing the issue. The company provides wearable smart hardware for the constant cardiovascular monitoring and a healthcare cloud application to store, share and analyze the healthcare data with the third parties and doctors.

“The Three Tier Architecture” by Tasic and Ristov explains the mechanisms: healthcare data is collected via wearable devices and sensors based on the individual, this data and information organized and collected via mobile device of that individual; and the entire information accumulated shared with the cloud; so that it can be examined and used on demand or whenever, wherever needed. The overall system brings enormous efficiency with tangible macro benefits. 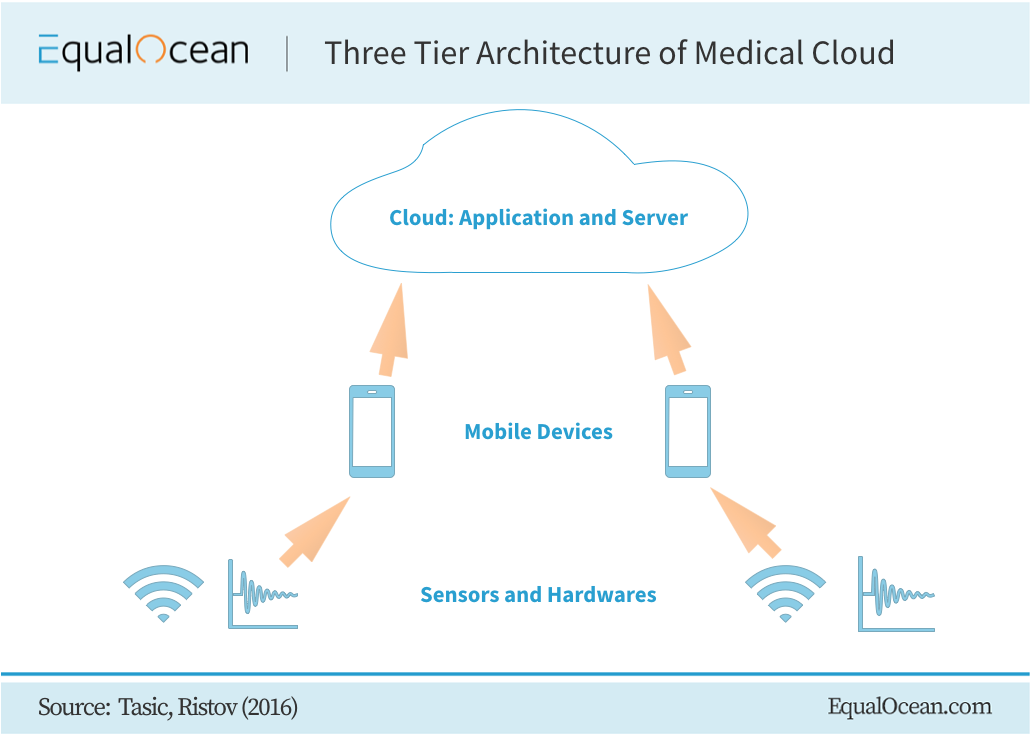 Telemedicine is the remote delivery of healthcare services and facilities the sharing of ECG, pulse rate, SPO2, Blood Glucose, NIBP, Pathological Slides, X-Ray Scanner and Dermatology  Camera. Along with 5G and medical cloud, all these services can be shared real-time with the doctor via the cloud; which brings an incredible capacity increase in the high-quality healthcare services in the remote areas.

China has severe structural healthcare problems; nevertheless, Chinese are good at conquering nation-level atrocities by long-term persistent policies. In the last 40 years; they overcame poverty by lifting hundreds of millions of citizens out from the poverty line in a way that has never seen in human history.

However, today, the challenge is even bigger for China. Because, this time, it has to transform its entire infrastructure under economic slowdown paradigms. China had grown double-digits for decades, but those good old days are all gone anymore.

For a healthcare rejuvenation, China needs market-driven technical developments together with a competent healthcare policy from the central government. The alarming situation can only be eased by utilizing a technological push for the entire infrastructure; medical Cloud and AI will play a crucial role in this transformation.