The Trend of STEAM in China’s Education Industry

In recent years, the education industry has had quite a few trends, which is not only favored by parents, but also attracts large-scale investments. Among which, STEAM has become a popular choice. 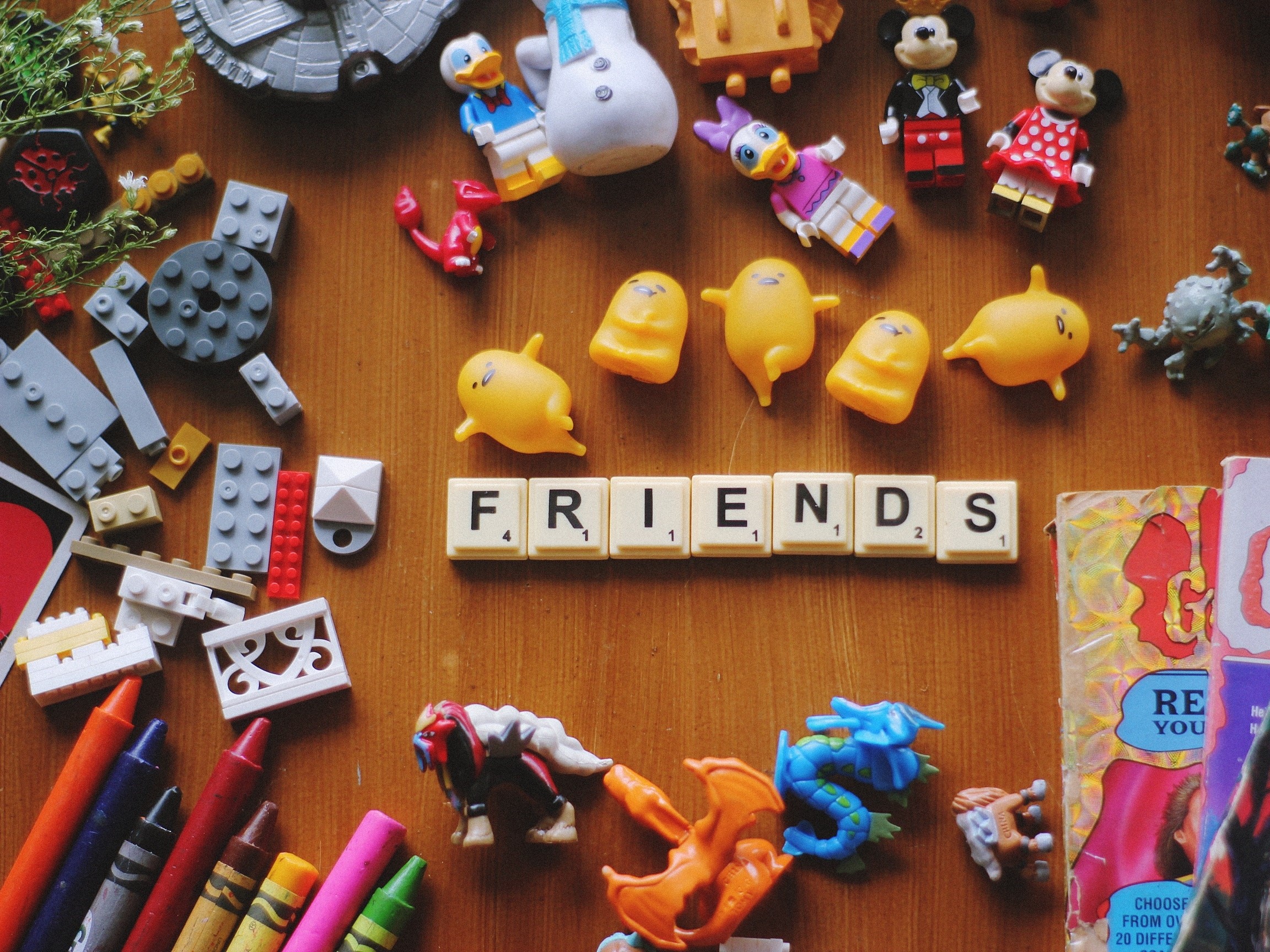 China's education industry has been highly valued for its significance policies, consumers and capital and under its expansion phase in terms of industrial scale and market activity. According to estimation by Deloitte's in August 2018, China's education market will reach CNY 2.68 trillion by the end of 2018 with training organizations, K12 & STEAM education, and private kindergartens being the three biggest segments. The total scale of private education is expected to reach CNY 3.36 trillion by 2020 and close to CNY 5 trillion by 2025 with a CAGR of 10.8%.

In recent years, China has introduced the STEAM concept to cultivate and integrate innovative talents and has gradually become a fashion. The survey data shows that STEAM education has a more efficient performance in terms of creativity and participation in literacy. 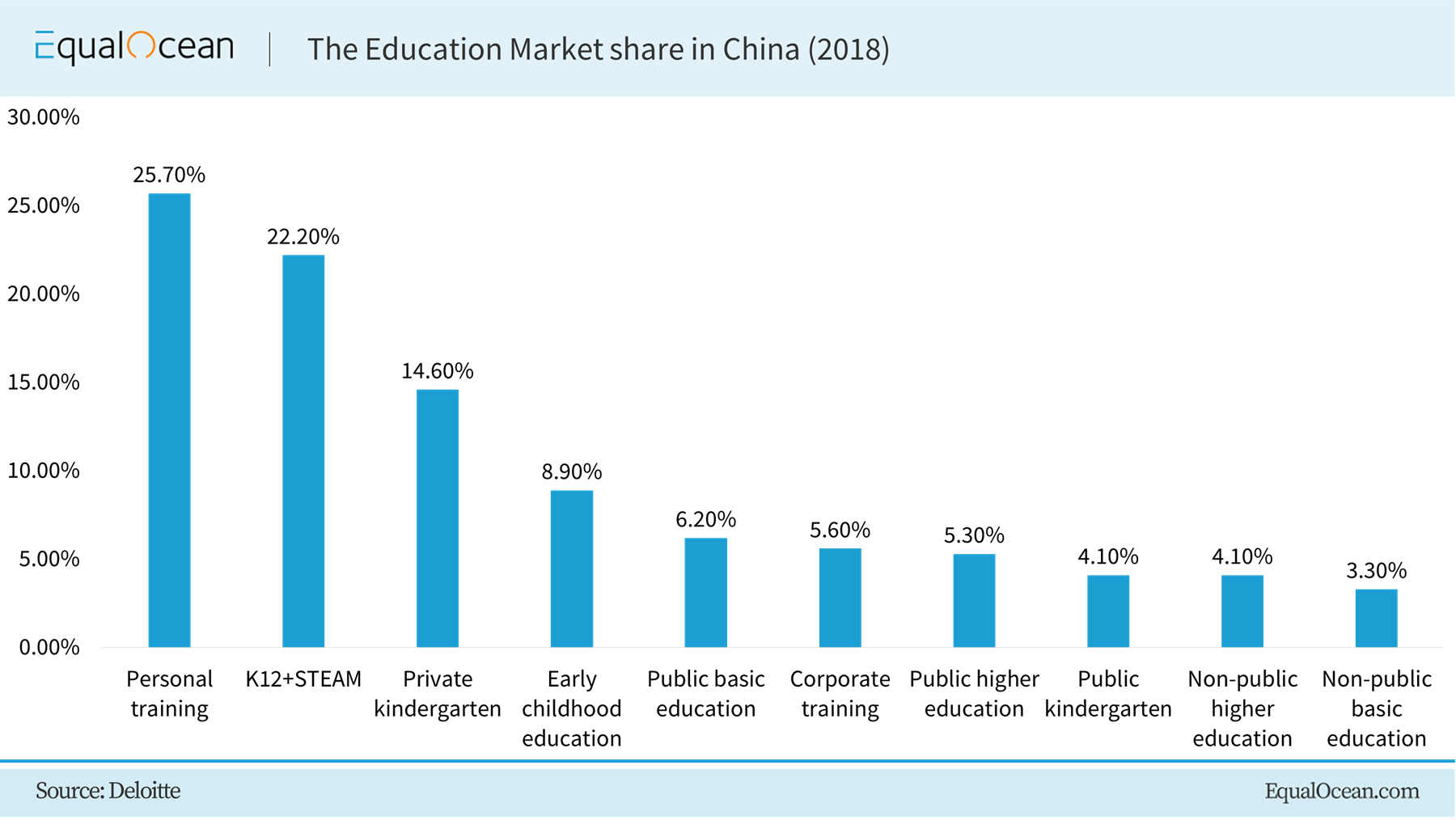 K12 education has developed for a long time in China and has formed a certain scale. With the development of AI technology, more innovative technologies will penetrate into the online education field. Applications such as big data and cloud computing can better address the needs of educated people and provide refined teaching solutions. 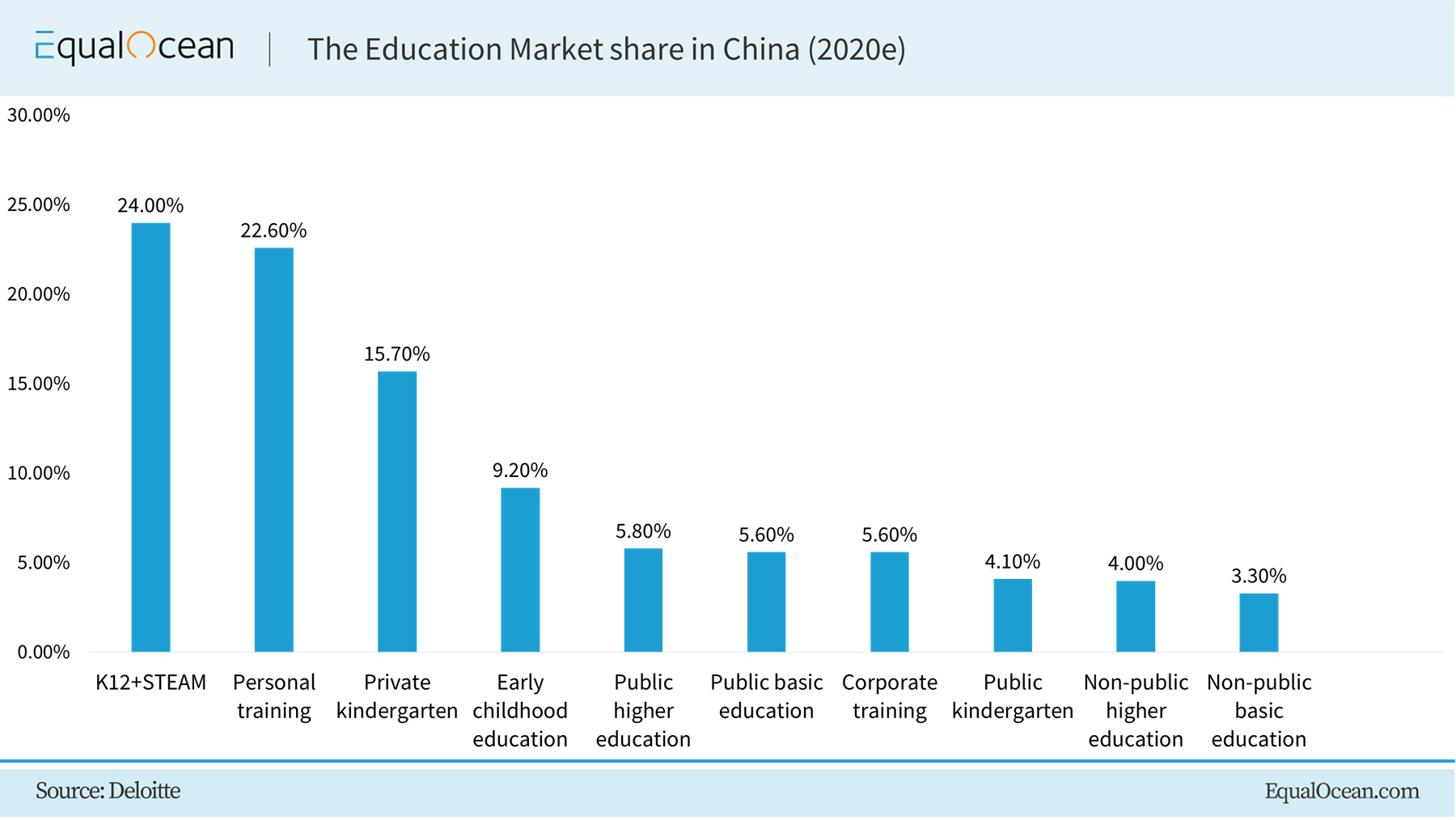 In recent years, some segmentation circuits have been hatched in children's education, which is not only favored by parents but also attracts the large-scale entry of capital. Among them, STEAM has become a popular choice.

As early as 2016, the Core Quality of Chinese Students Development put forward the idea of gaokao reform. The University entrance exam will pay more and more attention to the overall skills of students, not just the scores.

According to data released by Meituan Dianping (美团点评) Education Department, from 10 April 2018 to 9 April 2019, the courses that users bought most were: Music, Fine Arts, Foreign Languages, Vocational Technology, and K12 STEAM. STEAM has become a new hot spot in education.

As early as 2012, TAL education laid out its study plan which included STEAM, board games, etc. TAL’s STEAM sector currently includes companies such as FirstLeap, focusing on mathematics, science and English, Mobby, Iqidao, Xueersi, which teaching programming to children, and ABCtime. In the past, it has invested in STEAM education institutes such as Drosophilia academy, 61draw, a fine arts institute and Aomeng another institute which focuses on coding lessons for children.

As another giant in the education industry of China, New Oriental also established a brand of quality education and a development strategy for 3 to 12 years old back in in 2015. It has since cooperated with other institutes promoting STEAM education. Baixuehui, a brand established by New Oriental for the growth of STEAM education, has laid out 5 education complexes in Beijing according to relevant reports.

Although VIPKID focuses on English teaching but has cooperated with SSAT (a standardized verbal, mathematics and reading skills test used by admission officers to access the abilities of students seeking to enroll in an independent school).

In terms of investment, many well-known investment institutions such as Zhen fund, Sequoia Capital, BlueRun Ventures, etc. are very active in the field of STEAM education. Many startups related to STEAM education have received huge investments.

STEAM previously known as STEM without the integration of arts stands for Science, Technology, Engineering, Arts and Mathematics, has a relatively mature development system in many countries.

The USA has launched the “Hour of code” campaign to show that anybody can learn the basics of coding. With a slogan of “Do not just play on your phone, program it.”

The development of the AI field, the popularity of the programming industry, the shortage of social human resources, and other multiple factors have become the main driving force for the cultivation of technically advanced talents.

One of the distinguishing features of STEAM education from traditional education is the application of high technology. Different from the traditional offline classes, parents in first and second-tier cities prefer to choose such an education.

At present, the more popular open source programming tool Scratch and the first domestic children's programming language Kitten have become new toys for many children. With the development of mobile internet, programming learning is not limited to the PC, but now can be done on mobile phones, tablets, etc. For example, Lego's “WeDo” suite has further developed robotics courses.

As Compared with Traditional Education, STEAM pays more attention to children's thinking education and quality education, which can arouse children's learning curiosity and sense of achievement from more levels, stimulate children's potentialities in science education and cultivate their thinking ability.

Children's training usually consists of three sections: content, teachers, and community. What the enterprise ultimately delivers to the user is a complete set of products and service programs.

At present, the industry has not been formed completely, and various companies are also in the stage of polishing products and enriching customer experience. The official market battle has not yet officially begun.

STEAM is still in the early stage of development in China, and the industry scale is close to CNY 10 billion. The children's programming market is about CNY 3 to 4 billion with a user scale of 15.5 million, and a penetration rate of about 1.5%. iResearch predicts that the market for children's programming will grow to CNY 30 billion in the next five years, achieving a tenfold increase. As a growing sector of China’s education industry STEAM education is expected to exceed the scale of the CNY 100 billion markets in the future.

Among them, the electronic information industry is 9.13 million and the telecommunications industry is 1.37 million. There are 790 employees in the information technology industry per 100,000 population. According to international experience, a reasonable software talent structure should be a pyramid shape with blue-collar technicians at the base, software engineers in the middle and high-end software structural analyst on the top and a ratio of 6:3:1. The proportion of talent structure in China's IT industry is about 7.2:2.4:0.4. The proportion of middle and low-level talents is too large. The high-end talents are still short, which limits the expansion of the industry and the overall level.

Some industry analysts believe that a personalized teaching model based on big data and artificial intelligence will become the most potential area for future education.

In addition to policy orientation and talent demand, capital empowerment also provides good support for the development of the STEAM industry.

The education giants follow the trend and actively expand their business scope. They have gathered a large number of high-quality education enterprises at home and abroad, and have laid out STEAM education from the early stage.

In 2018, there have been more than 160 children's programming companies, of which about 50 have been publicly financed. As mentioned above well-known investment institutes have been active in the industry.

According to ITJUZI, there are currently over 200 children's programming startup projects and companies on the market as of 2018.

Due to the relatively late start of domestic STEAM education, the audience is relatively young. The parents mainly post 80-90’s, and the opening of the second child policy has promoted the development of STEAM education from the other side.

The education concept of parents in the new era is forward-looking and pays more attention to STEAM education.

In China, there is a natural correlation between education level and consumption ability of the parents. Under the macro background of consumption upgrading, the current parents' willingness to invest in education has increased with the increase in income. Quality education is expected to usher in the consumption dividend period.

Nowadays, there are so many kinds of STEAM toys on the market. Many parents can't help cutting off their hands when they see the word "STEAM". They think they can cultivate their children's scientific thinking if they buy it back home.

With the opening of the second-child policy, the growth of the population of the age-appropriate population has also promoted the development of children's science education to a certain extent. STEAM education, which is the comprehensive ability of children, will also usher in development opportunities.

At present, there are fewer STEAM courses in the school, which are caused by several reasons, the professional teachers are not enough, and the traditional courses are saturated.

The in-depth implementation of STEAM education requires the participation of all social forces. Governments, enterprises, universities, research institutions, schools, and social groups all contribute from different perspectives to build a collaborative and innovative science education ecosystem.

In the past two years, STEM education has been incorporated into the national strategic development policy. The 2016 National Science Literacy Action Plan Outline Implementation Plan (2016-2020), which is issued by the State Council, emphasizes that in the high school stage, it is necessary to encourage the exploration and development of scientific innovation and technical practice.

In the compulsory education stage, there are strict regulations on investment in teaching and research and development. Relatively speaking, the process of promoting STEAM in schools (mainly public schools) is relatively slow, mainly driven by policies.

The role of University/college entry examinations

At the end of 2017, Zhejiang has clearly included the information technology discipline (including programming) into the examination subjects of the college entrance examination, followed by Beijing, Shandong and other major provinces and cities. Nanjing Education Bureau has also included programming in the scope of the University Entrance Examination.

All of this indicates that the outbreak of the programming industry seems to be only a matter of time. According to reports, in the past year, at least 33 children's programming investment and financing events occurred, in which Codemao (编程猫) raised CNY 300 million in its C round of financing and CNY 120 million raised by Ao meng coding (奥梦编程) in its round B.

There are still many problems in the industry that need to be solved urgently. Many restrictive development factors are still in the exploration stage. STEAM education may need to wait for a suitable opportunity.

For STEAM education in China, the only role that society plays is public opinion. There is no linkage between the communities and enterprises as in other countries. At present in China, scenarios of STEAM education are only at school and at home.

Children from lower-tier cities with their parents having less income have only one chance to make it big which is to pass the gaokao (university entrance exam) and get into the best universities. They would want to spend more time and energy to prepare for the courses related to gaokao.

With parents nowadays paying more and more attention to the children's overall quality, and the Ministry of education encouraging steam education, which is slowly moving into schools as part of the school curriculum, the development of STEAM education in China will hasten in the near future.