China has eyed a surge of consumption-related internet for the past years, driven by the fine and complete infrastructure, which has powered the development of all aspects of our lives. 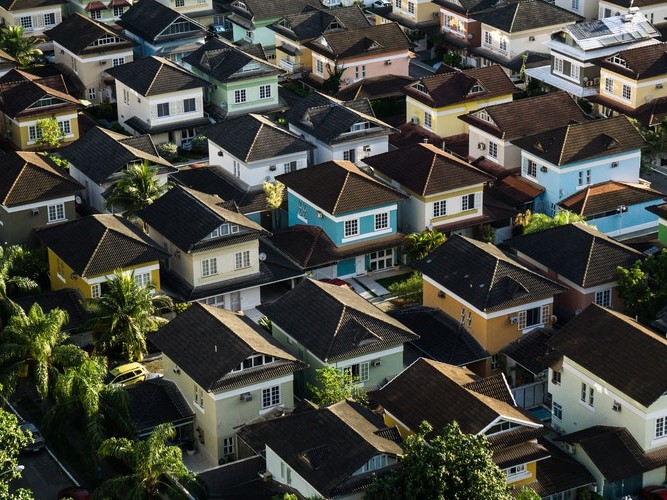 Whether denied or not, the real estate industry has a reputation for being slow to adapt to new technologies. For instance, telecommunications, finance, transportation, are leading in AI adoption while education and construction are lagging behind. Although it might be due to the fact that the industry is highly-correlated with professional advice which differentiates a company's value proposition to customers.

China has eyed a surge of consumption-related internet for the past years, driven by the fine and complete infrastructure, which has powered the development of all aspects of our lives. For instance, ride-hailing platform DiDi Chuxing makes us transport from Location A to Location B more convenient than ever by one click; food-delivery firm Meituan Dianping enables us to order food delivered in 30 minutes; e-commerce giant Alibaba offers us goods from all over the world via a simple App.

Technology is already in place to improve the experience of the users of real-estate. Eyeing the growing market potential, Beike Zhaofang has become the leading real-estate brokerage service provider in China while serving over average 3,000 customers and families daily. As of April 2019, Beike has facilitated over 160 brokerage brands and 21,000 real-estate broker stores, as well as 206,899 agents in its platform, and has expanded to 98 cities and regions across China. Seven out of ten orders are cooperated by different broker stores and agents. Up to 13 agents are involved in one transaction.

The one-year-old company has validated itself that its business model is reasonable, and it generates true value for not only customers but also agents that bringing agents from different brokerage brand together.

Beike claims that the firm wants to make it easier to buy houses for customers at first, push forward the development of industry secondly and give professional esteem for agents thirdly.

However, some moves in the US seems to signal that agents are so out-of-date when a computer can sell a house.

US online real-estate database company Zillow launched its latest house flipping service, which aims at making it easier to purchase, renovate and resell homes within 90 days—is a bet that more buyers and sellers want to streamline the laborious process. The business eventually drives USD 20 billion in annualized revenue, Zillow forecasts. However, some agents are skeptical as millennials are more comfortable when someone looks after them.

Finally, China’s embracing the era of technology when it comes to house searching, led by Beike.

Spotting the opportunity to make real-estate listings and transactions more transparent, China’s biggest brokerage giant Lianjia (链家, otherwise known as Homelink)  launched Beike in Feb 2018. Lianjia’s Chairman ZUO Hui (左晖) joined Beike as Chairman. PENG Yongdong (Stanley Peng), a former senior strategic consultant from IBM, serves as Beike’s CEO and Executive Director. It is hard to get away from Lianjia when talking about Beike: the mechanism of growth in Beike lies in its business model as well as its Lianjia gene.

Lijia adheres to “authentic listing” and “exclusive listing” in eight years before the company went online. Unlike most real estate and/or property agents that collect data and provide it to the onlooking customers/sellers, charging money for a closed deal, Lianjia proposed the concept that owner singularly entrusts their property to the company on receiving the promise of a sale within a certain period of time. To guarantee authentic data and expand the database at the same time, Lianjia sends out agents to collect data by themselves.

One of the clichés about the real-estate brokerage in China is: if a broker or real-estate platform needs to increase listings, it has to search for housing by itself or it has to pay. However, either agents or brokerage platforms are unwilling to share their exclusive information even they get paid. Things cannot work out in the other way, almost all of the startups in China abandoned the self-supporting way and turned to sublessors. It is an easier way to control housing data than Lianjia’s approach.

However, Beike’s launch has proven that now is an excellent time to unite all industrial shareholders to complete that mission impossible and pivot to the new horizon.

Lianjia created a “property dictionary” of over 187 million houses in more than 450,000 communities and 325 cities, covering more than 90% of housing in tier 1 and tier 2 cities, is the most valuable legacy that Lianjia left for Beike. This dictionary is more of a data center where the information is identified and assessed for authentication. The move also can avoid duplicate listings on its platform, a problem faces on almost all real estate websites which try to show an increased number of listings by the method of duplication.

Concerning about the availability of all Chinese housing, Beike replaced Lianjia’s low-efficiency approach with its big open platform that allows all brokerage brands joining.

Beike’s aiming to creating a win-win marketplace for all agents, brokerage brands, and franchise stores and serving for them with its ACN (agent cooperation network).

Countless ties between Lianjia and Beike

Distrusts and cut-throat competition within the industry, however, are the main hurdles for Beike’s development. April 2019, Century 21 Real Estate (China), a well-founded brokerage brand worldwide, announced its business cooperation with Beike.

Lianjia is patient and prepared well for Beike, which is considered the most innovative branches that the company created in recent years. Lianjia has agreed to a strategic investment agreement with Century 21 (China) in September 2017. Under the terms of the agreement, Lianjia will hold 10 percent of the fully diluted shares of Century 21 (China).

Lianjia has three independent business entities, brokerage brand Lianjia, listings brands Beike and affiliate agency management brand, Deyou (德佑), which Lianjia acquired in March 2015. In Jan 2018, Lianjia re-launched Deyou as a franchise business, ushering the new era of open-platform. Deyou has approximately 600 franchise stores now. With the Beike spinoff on the way, Lianjia is now said to be focusing on its offline brokerage model, providing sales and marketing of new and secondary-market homes, leasing and other advisory work through its network of more than 8,000 branches across the mainland. It is also listed on Beike as a brokerage brand just like other agencies.

Lianjia aims higher. In Jan 2019, ZUO Hui reunited the three business into one group and incorporate Beike and Deyou’s background system. The move was considered to boost Beike’s national expansion and also cut huge operation and communication costs, according to people familiar with the matter. Open source indicates that two-thirds of core executives have transferred from Lianjia to Beike. Stanley, the company’s CEO, claimed that Beike has 1,600 employees in R&D department now in an interview with EqualOcean.

Lianjia, was reportedly planning to raise USD 2 billion from Tencent and Warburg Pincus LLC, Wall Street Journal reported in Spetember 2018. The deal would value the company at USD 13 billion. The company was previously valued at closer to USD 6 billion (or 51.4 times its net profit for 2015) following investments of CNY 2.6 billion and CNY 3 billion from property development giants Sunac China and China Vanke, respectively, in January and April 2017. Warburg Pincus, however, decided the valuation that Lianjia sought was too rich. We have no further clue about the deal but Tencent did announce its USD 800 million injections into Beike in March 2019. The ultimate target funding has not yet been announced.

On 20 March 2019, the number of shareholders in Lianjia had been reduced from 37 to 15, with China Renaissance Capital, New Hope Group, and two major property developers China Vanke and Suanc China Holdings among those no longer on the shareholder list, according to the company data provider Tianyancha. It was not a sacrifice, however, the former investors’ stakes have been transferred to Beike with the same share structure, according to China’s media Caixin. After that, Lianjia became the second-level subsidiary company of Beike, which will have a higher valuation then as Lianjia’s parent company, according to an investor followed in the Series D funding. That means, instead of seeking a listing itself, Lianjia would make Beike the main listing vehicle.

Beike (Tianjin) Investment is also the wholly owned subsidiary of a Hong Kong-based real estate services company, which allows ZUO Hui and his leadership team to remain in control of Beike with a variable-interest entity structure-backed overseas listing. Rumors said that their first location for a listing on foreign exchange was Hong Kong.