Meicai purchases directly from primary suppliers and farmers, based on what the company calls a F2B (Farmer to Business) model. Meicai claims that it sources approximately 50% of its produce from farmers and it expects the figure to grow. 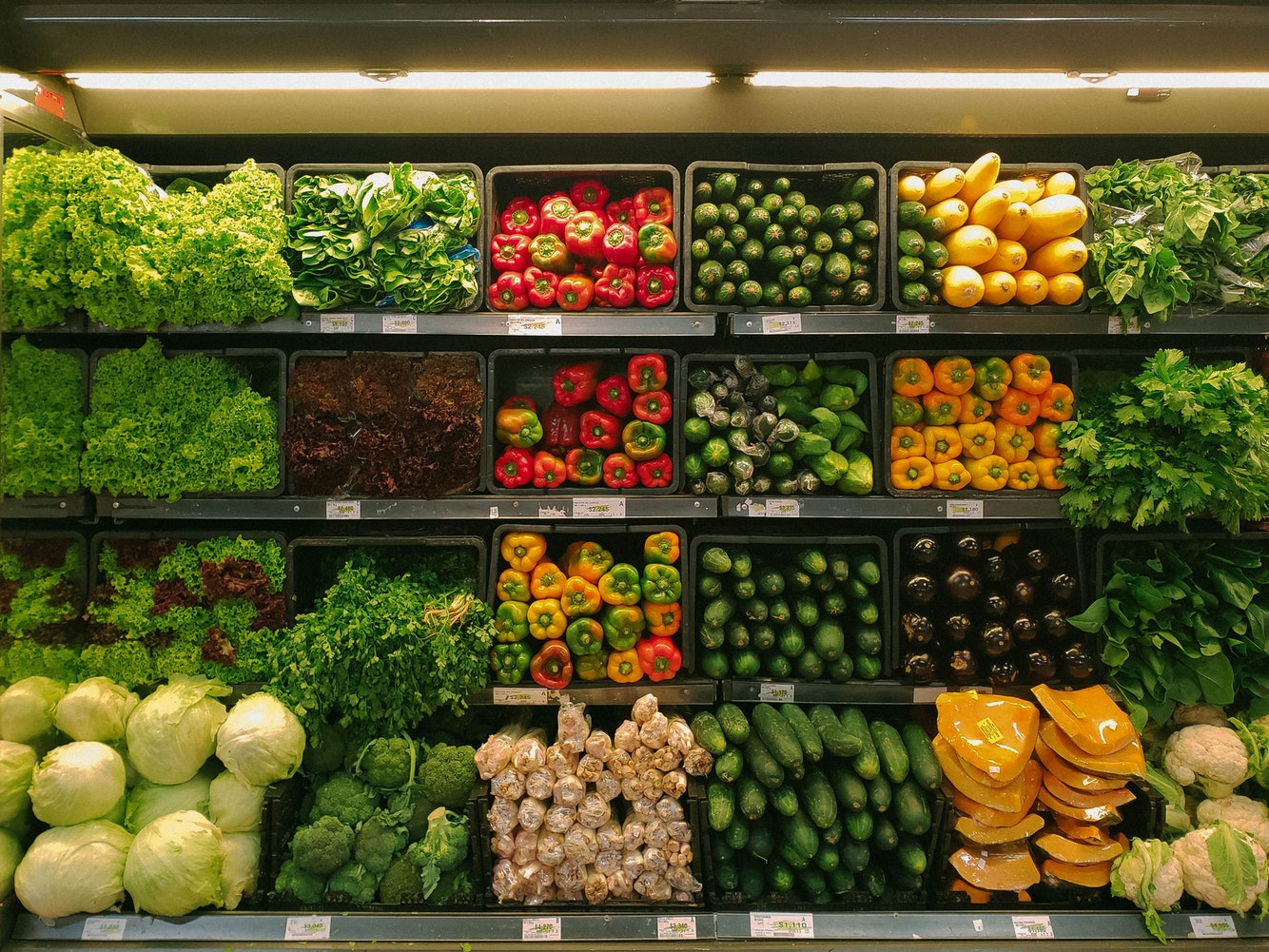 Meicai (美菜), a Chinese startup that helps farmers sell vegetable to restaurants, is facing competition from China’s biggest online platform for lifestyle Meituan Dianping and e-commerce giant Alibaba, which bet big on the future of business-to-business (B2B) service in the catering industry. Founded in 2014, Meicai allows restaurants to order raw materials, and spices and other kitchen supplies from a large variety of vendors by simply clicking a button. The company is reportedly valued at USD 7 billion.

The foodservice distribution industry in China is a highly fragmented market. The same can be said of the U.S. as well, where 15,000+ distributors are trying to satisfy the needs of more than 500,000 restaurant and institutional customers, Credit Suisse says in a report.

China's catering market generated CNY 3.9 trillion in revenue in 2017, with a CAGR of 9.6% from 2017 to 2022. Self-operated restaurant chains accounted for only 4.3% of the service market in 2017, while franchise restaurant chains and standalone restaurants contributed more than 95% of the industry's revenues in 2017. Millions of foodservice distributors are struggling to meet the needs of these small- and medium-sized restaurants scattered across different cities in China. 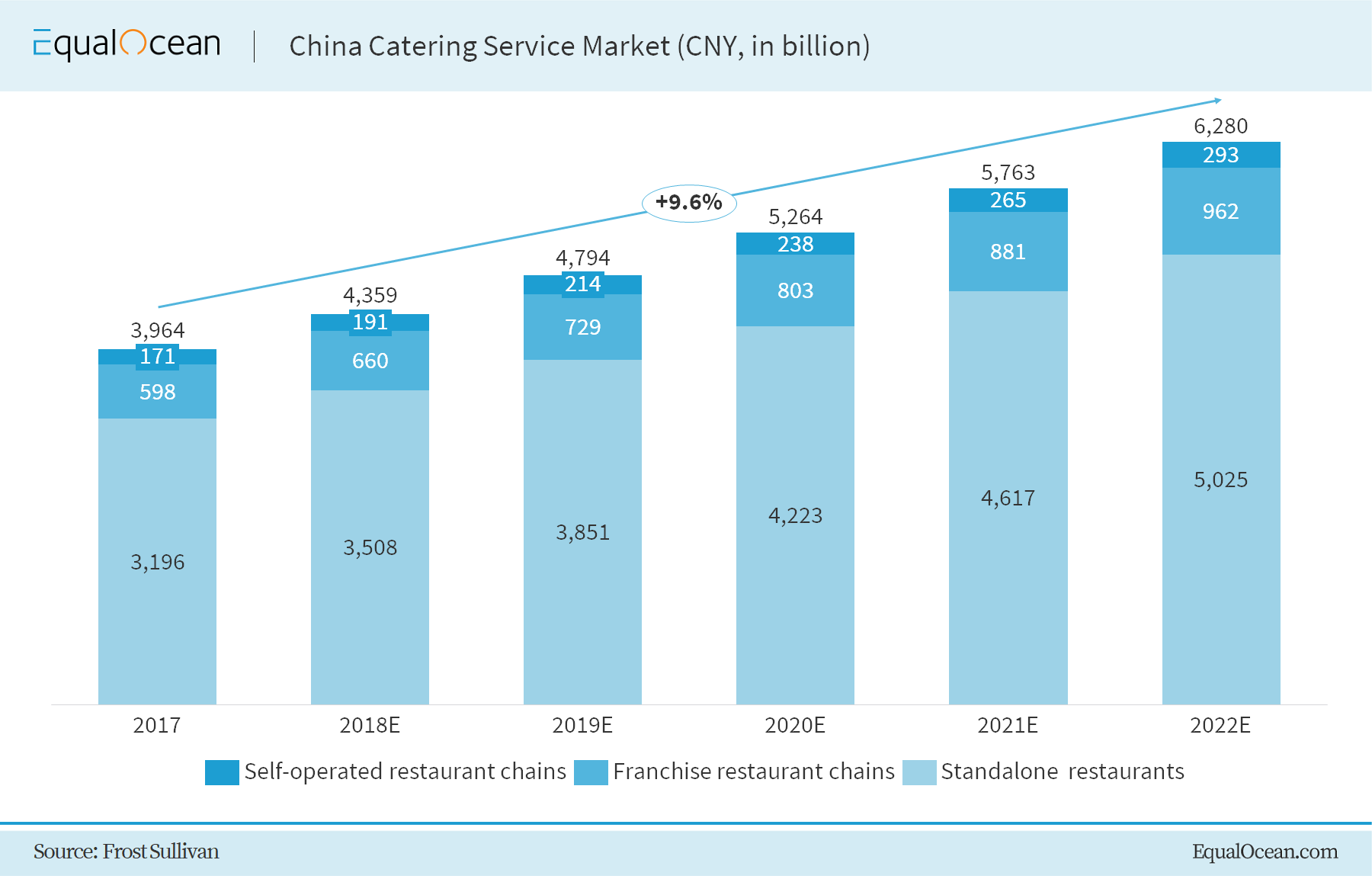 China Hospitality Association calculated that the top 100 self-operated restaurant chains generated 5.04% of the total transaction volume in 2017. These players normally have stable relationships with their food suppliers. Assuming that the rest of restaurants spend 30% of their sales for food materials on raw materials, we estimate the food service market that Meicai targets is worth approximately CNY 1.1 trillion.

Meituan Dianping was drawn to this booming market several years ago. The company launched Kuailyv Jinhuo (a.k.a Fast Donkey Delivery) in March 2016 after its main competitor Ele.me rolled out Youcai, also a fresh groceries brand, in July 2015. This marked the beginning for the two platforms, which previously offered only a traditional B2C online-to-offline (O2O) food delivery service, to expand into B2B sphere.

Despite their ambitions, Meituan and Ele.me both failed to become the market leader. It is partly because Meituan and Ele.me were distracted by more fierce competition in their core takeaway business, and Meicai has come to dominate the vertical with its tremendous first-mover advantage.

Meituan appointed Chen Xudong (陈旭东) as senior vice president in charge of B2B Food Supply Chain Business in April 2018, signaling a return of the company to the battlefield of food distribution. After its acquisition in April 2018 of Ele.me, Alibaba also announced it planned to re-launch Ele.me’s Youcai in December of the same year. It’s a new battlefield for the tech giants, which possess abundant merchant data and knowledge about consumer preference. As Meituan and Alibaba are phasing out their heavy subsidies, they are weighing more on B2B supply chain management.

Apart from competitors with an Internet background, there are also other players that warrant attention. Songxiaocai (宋小菜), a B2B platform that links food vendors with restaurants, differentiates itself from Meicai by focusing only on information offering rather than serving as a middleman in the supply chain. Meicai’s closest rival Farmlink (链农) announced it passed its BEP (breakeven point) in June 2017.

Foodservice distribution is hardly a winner-takes-all marketplace if we use the U.S. market as a benchmark. In the U.S., the top three players Sysco, USFD and PFG hold a total market share of 30%.

Optimization of the overall supply chain

Meicai's founder Liu Chuanjun (刘传军) is a graduate off the Chinese Academy of Sciences with a bachelor degree in astronomy. Thanks to the penetration of smartphone and the Internet from 2013 to 2014, Meicai made it possible for customers to order vegetable, meat, and seafood directly from farms, disrupting the traditional wholesale business by making middlemen obsolete. Liu once calculated that the seven layers of intermediaries between restaurant and farm extracted up to 90 percent of the 'produce's' value. 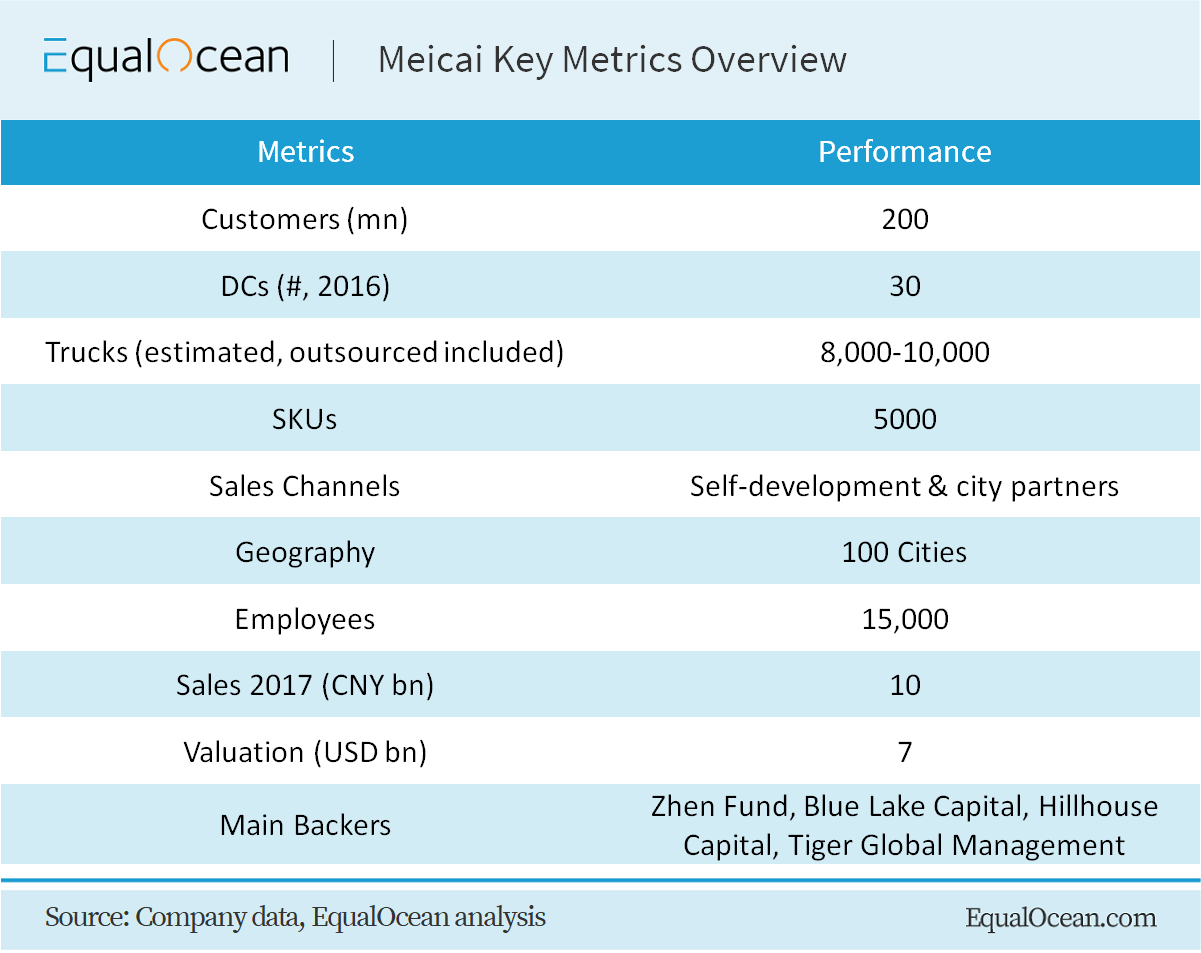 To localize its food supply, Meicai has expanded its distribution facilities throughout the country, launching regional operating offices in cities including Beijing, Shanghai, Shenzhen, and so on. In August 2014, the company employed more than 9,000 people, 4,000 of whom were freelance drivers. The firm has 15,000 employees now and has established a presence in 100 cities. Meicai conducted transactions to the tune of CNY 10 billion as of the end of 2017 and served 2 million enterprises as of April 2018.

JD-like model: all in logistics

After its Series D round of financing, which pushed up its valuation to more than USD 2 billion, Meicai decided to build its own fleet of trucks and invested in cold-chain logistics. In 2017, the company rolled out its cold chain trucks and announced its “cold beauty” plan to purchase 3,000 to 5,000 cold-chain trucks. The company had 5,000 ordinary trucks back in 2016. If the plan pans out, most of the trucks will be retrofitted for the transportation of frozen or perishable foods.

By contrast, the US Postal Service operates 211,264 vehicles and Sysco, the largest foodservice distributor in the U.S., owns approximately 95% of these vehicles and leases the remainder.

Relying on its own logistics, Meicai is able to deliver reliable service to customers. Moreover, it has slashed the average transaction price by 15% and pared 36% off budgets for enterprises, the company claims.

Meicai is choosing a similar model to JD.com, another e-commerce giant, when it comes to logistics. Thanks to its own logistics network, JD.com has successfully differentiated itself from arch-rival Alibaba. The standalone subsidiary JD Logistics increased its revenue by 91% year on year in the first quarter of 2019.

Attrition rate is a problem that confronts all fresh-food sellers. By adopting an online subscription model, Meicai can purchase and deliver goods according to orders, thereby cutting inventories. Meicai needs to invest in equipment like refrigeration systems and other technology.

The company closed its Angel round of funding of CNY 10 million from Zhen Fund, a Chinese well-known venture capital founded by Xu Xiaoping (徐小平) in 2014. Meicai later received investment from Blue Lake Capital in the same year. The firm soon became the industry leader, at least judging by the sheer size of fundraising. Meicai had raised more than CNY 1 billion (USD 150 million) by the end of 2015.

The company raised at least USD 600 million in a funding round led by Tiger Global Management and Hillhouse Capital, Bloomberg reported in Oct 2018.

Now, with millions more in available funding, Meicai is set to expand still further and bolster its strength, especially in sales, quality control, and delivery methods.

The company frees farmers from the early-morning trek to their local market and assures chefs of the quality of their supplies. Enterprises purchase fresh meat and vegetable from Meicai, which sticks to the routine of sending out trucks and minivans every morning, mostly owned by subcontractors, to transport its purchases, in what is sometimes referred to as a quasi-military model. Each truck delivers to at least 15 enterprises once a trip.

Meicai’s proprietary TMS (Transportation Management System) determines each car’s optimized load weight arrangement and plans the delivery route. It opened its platform to qualified third parties and allow them to open stores, set a checklist, and price their products in 2017. The company charges a commission on the total transaction as compensation for its warehouse and delivery services.

As Meicai is pivoting toward a “platform + capacity” model, it derives its main revenues from price differences commission fees from third party merchants.

This strategy highlights the company’s efforts in growing its SKUs and improving customer stickiness. There are 100,000 SKUs in China's catering market, meaning Meicai only has a 5% penetration rate with its current 5,000 SKUs.

A business with diseconomies of scale?

Songxiaocai’s CEO Yu Lingbing (余玲兵) claimed that it is hard to cannibalize the established distributor industry if a B2B platform like Meicai wants to disrupt the industry by supplying goods to restaurants directly by itself. Chains have a set of traditional procurement processes so Meicai's suitable customers would be small-and-medium restaurants, which have lower budgets. In addition, mid-tier and higher-end restaurants have more hard-to-satisfy needs when purchasing specialty and center-of-plate product, making B2B platform hard to satisfy them.

A broad product expansion does not always translate into selling power, as well. The platform may find itself losing its bargaining power in the single product.

Diseconomies of scale happens when the platform needs to pre-treat goods, a process that can hardly be automatic.

Meicai is exposed to volatility in food cost, turnover of its sales, and vagaries of fuel costs. However, Meicai can learn a lot from its U.S. counterpart Sysco a lot. Sysco’s business model is showcasing its competitive advantage. 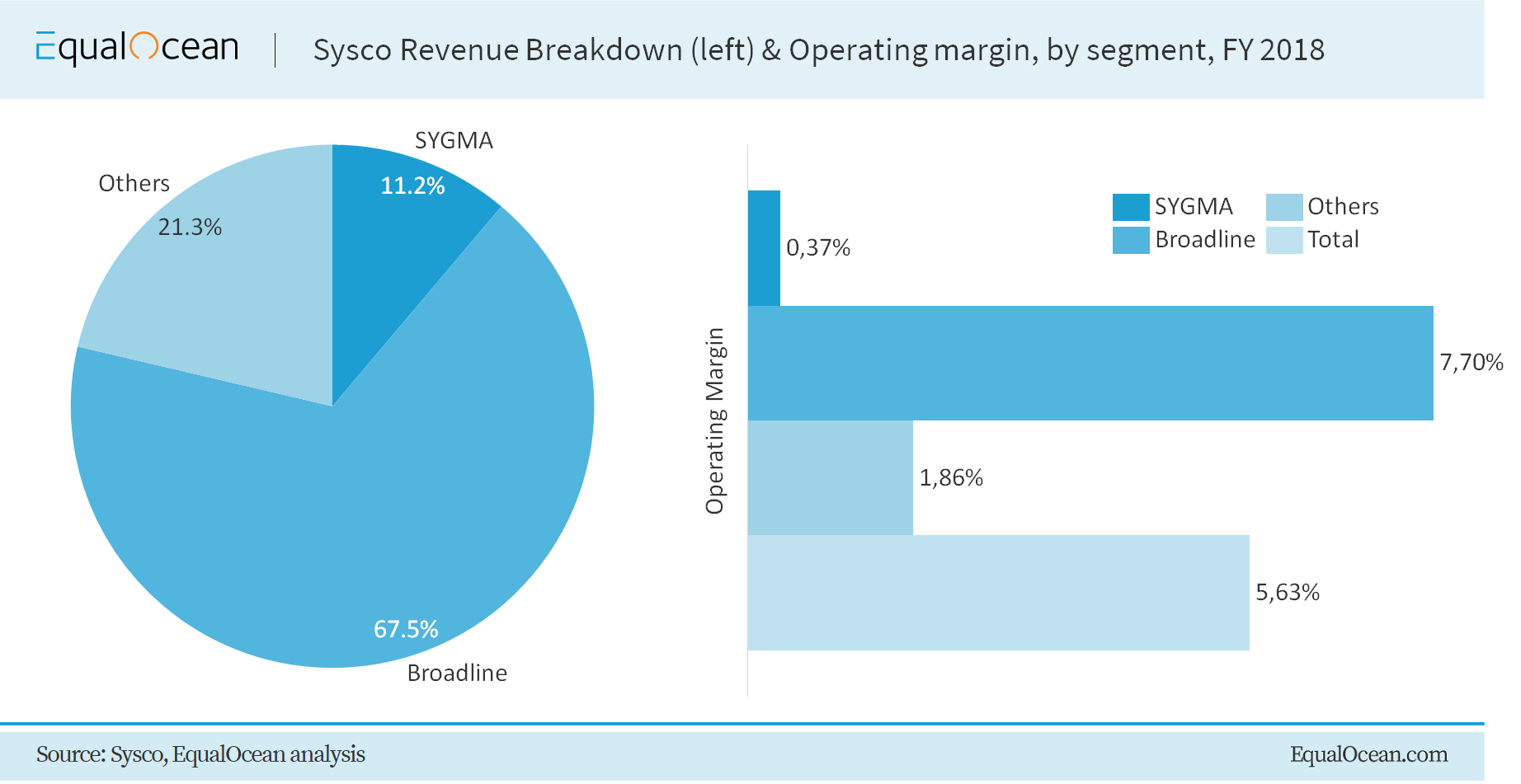 Broadline accounted for the majority of the company’s overall revenue in fiscal year 2018. It was also much more profitable than the other units, with a 7.7% operating margin during the same period. SYGMA's customers are mostly chain restaurants. High-volume chains have the buying power to negotiate better prices, resulting in bad margins for Sysco. Thus, Meicai’s utmost mission is to attract as many as small- and medium-sized restaurants in China as possible.

Sysco’s sales force and geographic capability in its distribution area and resulting purchasing power make Broadline successful. It is a success that can be duplicated in China by Meicai and we’ve seen evidence that Meicai is poised to leverage its leading assets to energize the sales line.

After procurement, warehouse and delivery standards were established in 2017, Meicai released its City Partner project. Partners set up distribution facilities and help to expand Meicai's delivery abilities. They invest in the venture and recoup all the operating profits. Meanwhile, Meicai trains partners to use its system, supporting them in the aspects of marketing and financing.

Meicai’s distribution centers are part of parcel of the company’s competitiveness. Meicai is trying to establish a consolidated product procurement program designed to develop, obtain and ensure consistent quality food products. Meicai purchases directly from primary suppliers and farmers, in what the company calls a F2B (Farmer to Business) model. Meicai claims it sources approximately 50% of its purchases from farmers and it expects the figure to grow.

In the future, Meicai needs to guarantee products purchased from its website follow specifications that have been developed by its own quality assurance team. It responsible for certifying the manufacturing and processing plants where products are packaged, enforcing quality control standards and identifying supply sources that satisfy its requirements. Only when these goals are attained can the company acquire a strong purchasing power.