E-commerce & retail ranks second in the number of unicorns globally with a valuation of USD 132 billion. The US and China represented over 70% of companies in number and valuation. Apparel & accessories and e-commerce platform have brooded most unicorns. 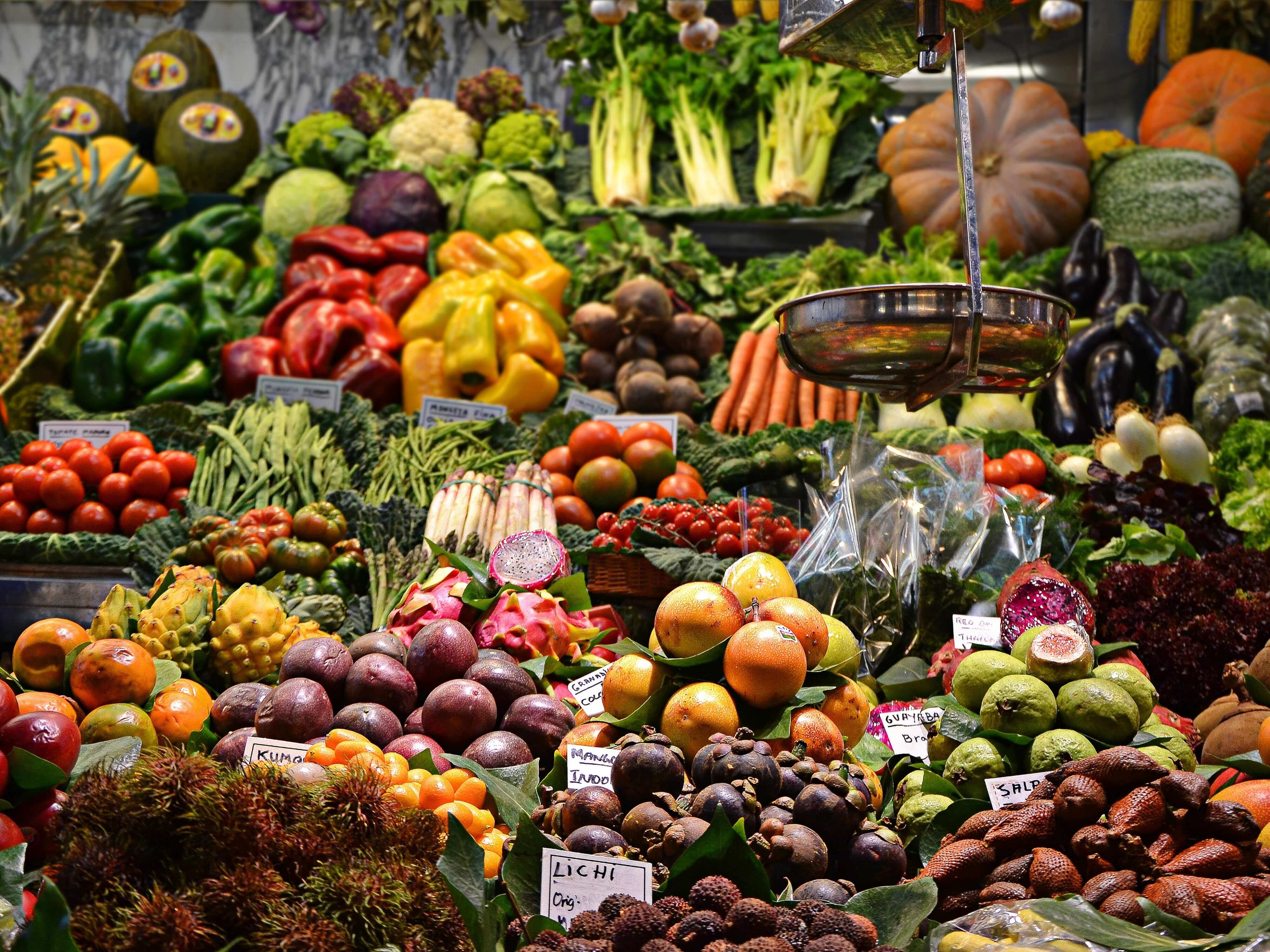 EO Intelligence has sorted out 382 unicorn companies (valuation over USD 1 billion) who made their appearance from 2010 to July 31, 2019, spanning 20 different industries and sectors based on the Complete List of Unicorn Companies provided by CB Insights.

This article will shed lights on unicorns in the e-commerce and retail industry among all 14 different industries adjusted by EO Intelligence and EqualOcean.

Different from CB Insights that puts ‘consumer & retail’ and ‘e-commerce & direct-to-consumer’ into two categories, we look at retail and e-commerce as a whole.

Despite the promulgated opinion of the "retail apocalypse" caused by internet popularization, the de facto situation is that e-commerce trend has penetrated in the retail world and most retail shops have made some kinds of online presences.

The company distribution below unveils the leading position Internet software & services possess as the incubator for unicorns with a number of 53 companies, followed by e-commerce & retail, fintech and health with 48, 46 and 32 unicorns respectively. (Please be noted that the number of unicorns might be slightly different due to further adjustment in our series unicorns articles.) 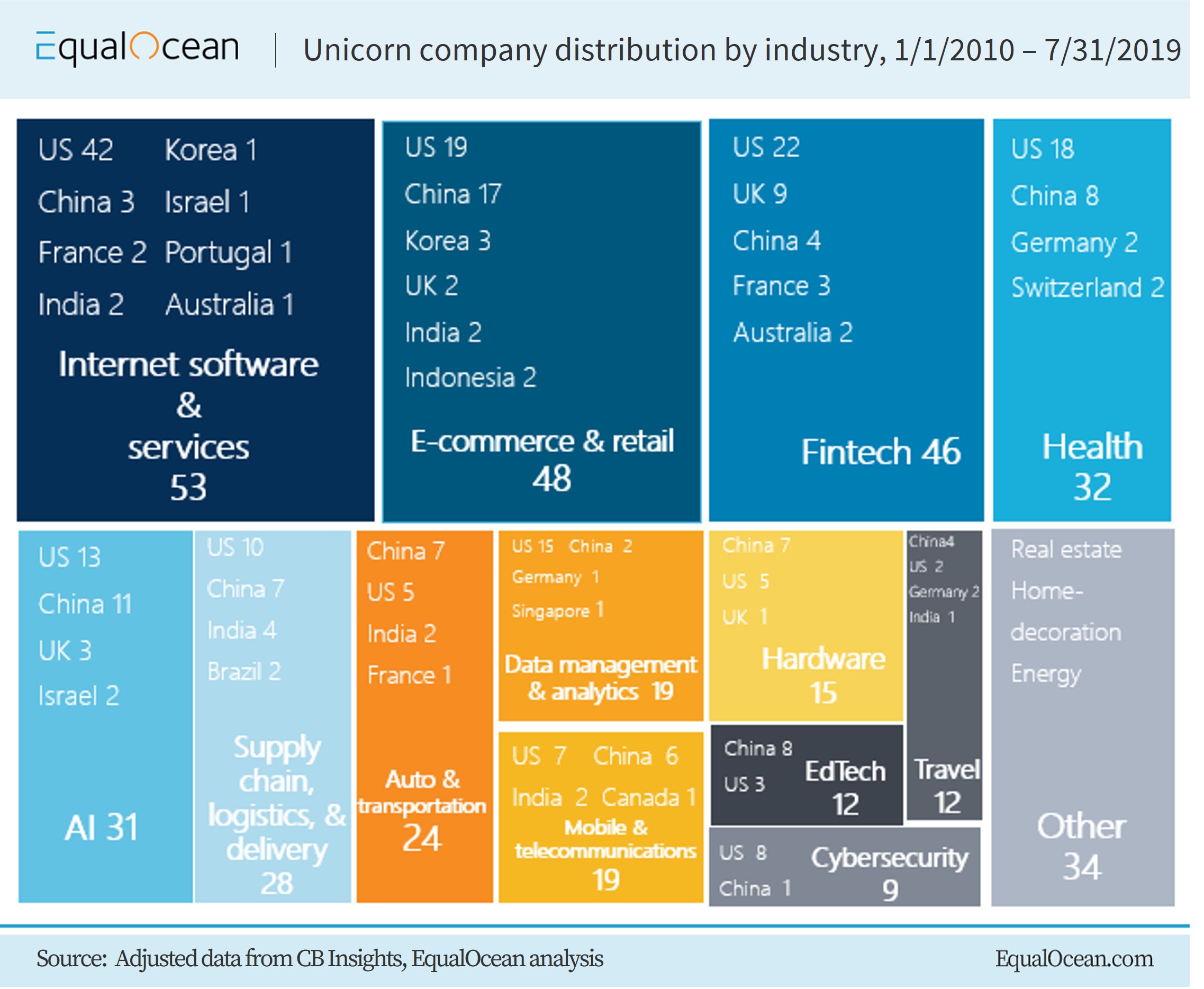 E-commerce & retail ranks second in the number of unicorns with a valuation of  USD 132 billion. If applying a wider definition to include unicorns who provide service directly to customers, we are safe to conclude that this sector tops as the lair of unicorns. Observers said the ever-growing array of human needs and desires is one of the reasons that has kept this industry growing undeterred.

US-listed consumer-packaged-goods (CPG) companies, for example, have increased total returns to shareholders by an annual average of 10 percent over the past 25 years, outperforming not only the broader S&P 500 index but also high-growth industries such as information technology, energy, and telecom. – McKinsey & Company, ‘The decade ahead: Trends that will shape the consumer goods industry.’

The performance of CPG is in line with unicorn companies. Since 2017, 10 or more newborn unicorns emerged every year in e-commerce & retail sector, making this industry outstanding in number and vitality.

Next, EqualOcean conducted an analysis based on unicorns valuation and different categories.

Judging by the number of unicorns, we have observed a high concentration in the top two countries. US and China represented 75% (40% and 35% respectively) companies in the sector. Judging by valuation, the high concentration phenomena remains and even takes a step further. US unicorns, the undoubted leader, possessed 50% of the valuation added up by all unicorns. 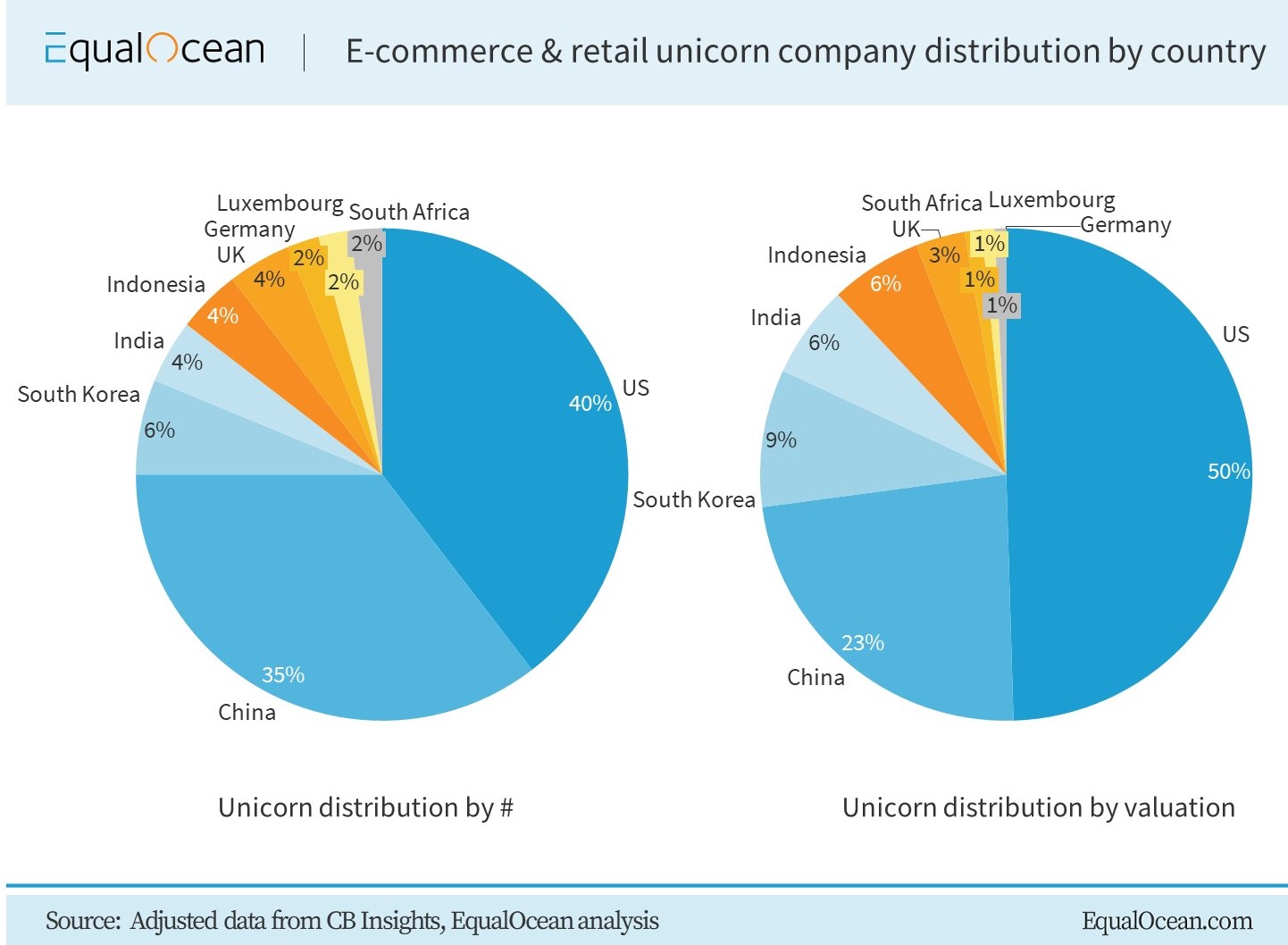 The most expensive unicorn – JUUL Labs

Of the 48 unicorn companies, JUUL Labs, an e-cigarette company, is valued at USD 38 billion -- way ahead of other counterparties. JUUL is the biggest e-cigarette brand worldwide that accounts for 76% of the US market share. Although being frequently accused of targeting schools, camps and youth programs, the company has been growing fast and is teaming up with Chinese e-commerce giants JD.com and Alibaba to enter this yet to boom e-cigarette market in China.

Besides JUUL’s glory, 40% of other unicorn company has tapped the standard of USD 1 billion such as Casper, BrewDog, Global Fashion Group and ShopClues with USD 1.1 billion valuations. 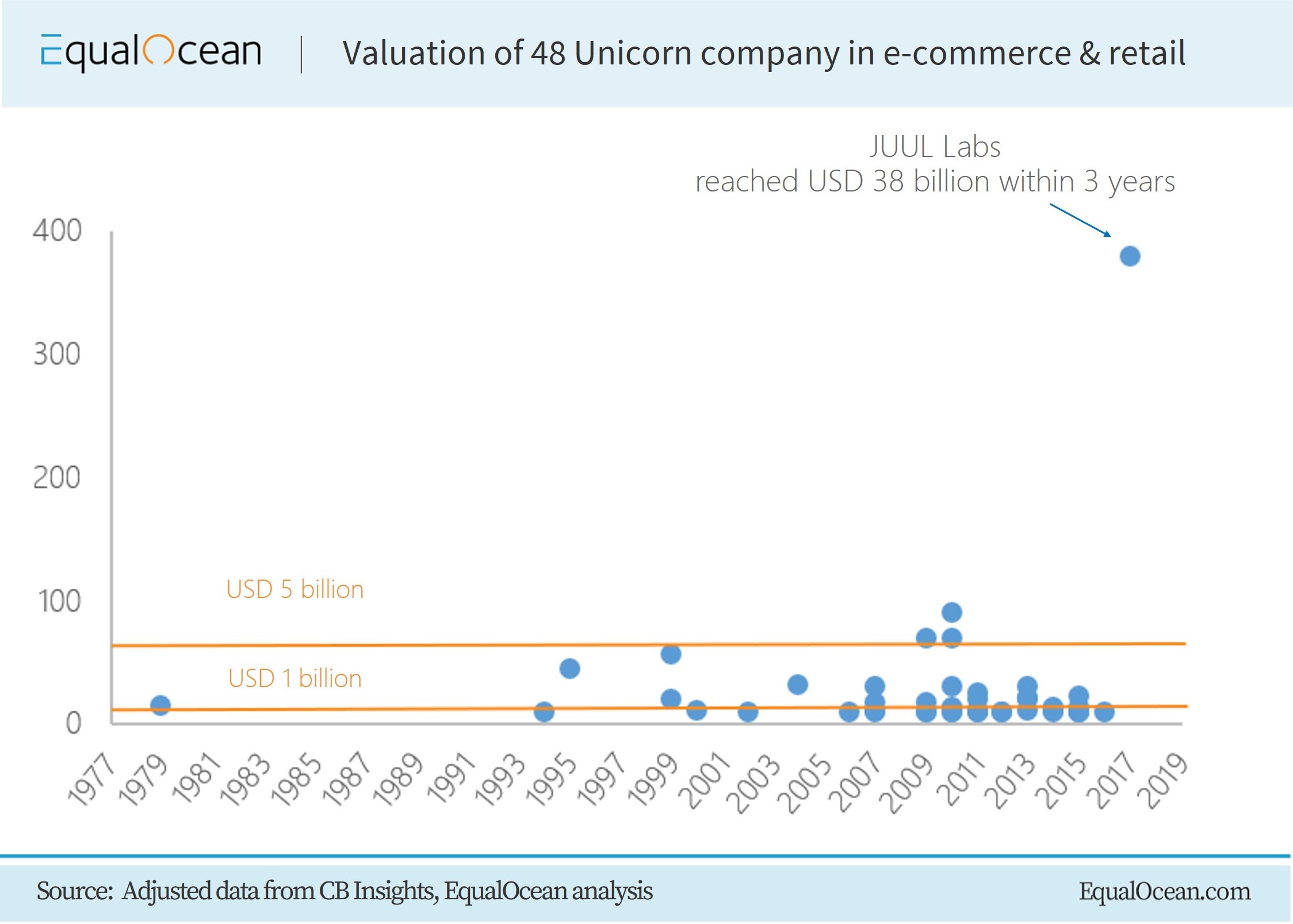 The industry with most female founders

Women have an instinct of fashion and beauty, which is again proved in unicorn’s world. E-commerce & retail has been the most sensitive industry that has embraced most female founders. These founders are from modern travel & lifestyle company Away, beauty & skincare brand Glossier, mom & baby platform Mia.com and so on, leveraging their advantages of innate sense in the industry.

Below shows the list of 10 female founders in e-commerce & retail industry. 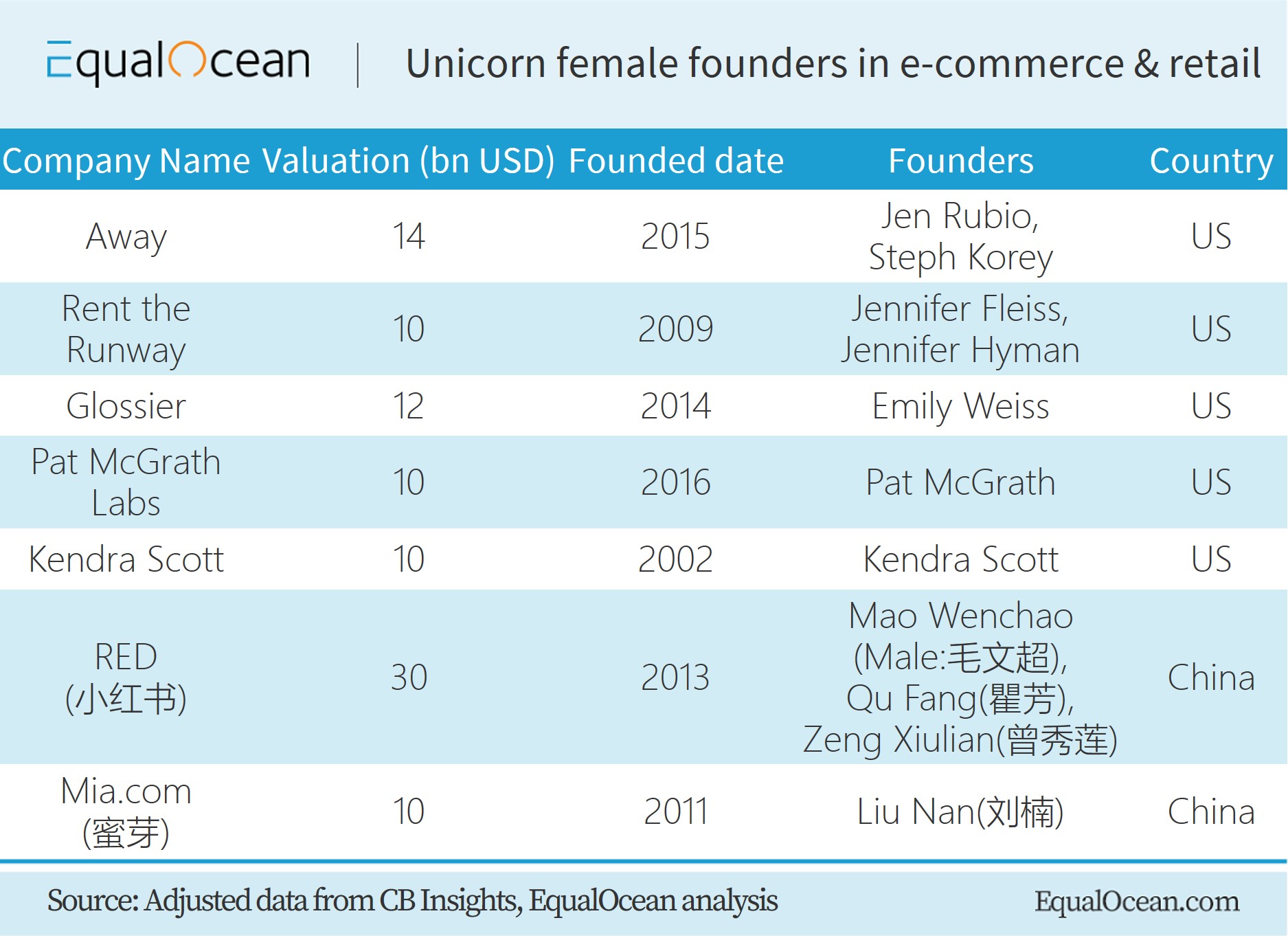 The most fast-growing unicorn – JUUL, again

With an average duration of 7.6 years to become a unicorn, JUUL Labs joined in the club same year of its inception. Besides this San Fransisco-based unicorn, the US also owns the top three companies who refer to as the fast-growing unicorns.

Founded in 2017 by Adam Bowen and James Monsees, JUUL enjoyed the title of the most expensive and fast-growing unicorn. The e-cigarette industry that has fostered the like of JUUL Labs and Pax Labs, is not only prosperous in the US but worldwide.

According to Tianfeng Securities, global sales of new tobacco (e-cigarette and Heat-not-Burn (HnB) as two major categories) reached USD 27.74 billion in 2018, with sustained high-speed growth of 60.6% year-on-year. The HnB and e-cigarette accounted for USD 11.9 billion and USD 15.8 billion respectively. It is estimated that the global scale of new tobacco will jump to USD 37 billion in 2019.

The vaping market is also blossoming in China with the largest number of smokers in the world. Compared with four investment deals last year, Chinese e-cigarette startups raised loads of venture capital in 2019 with more than 25 investment deal closed so far. 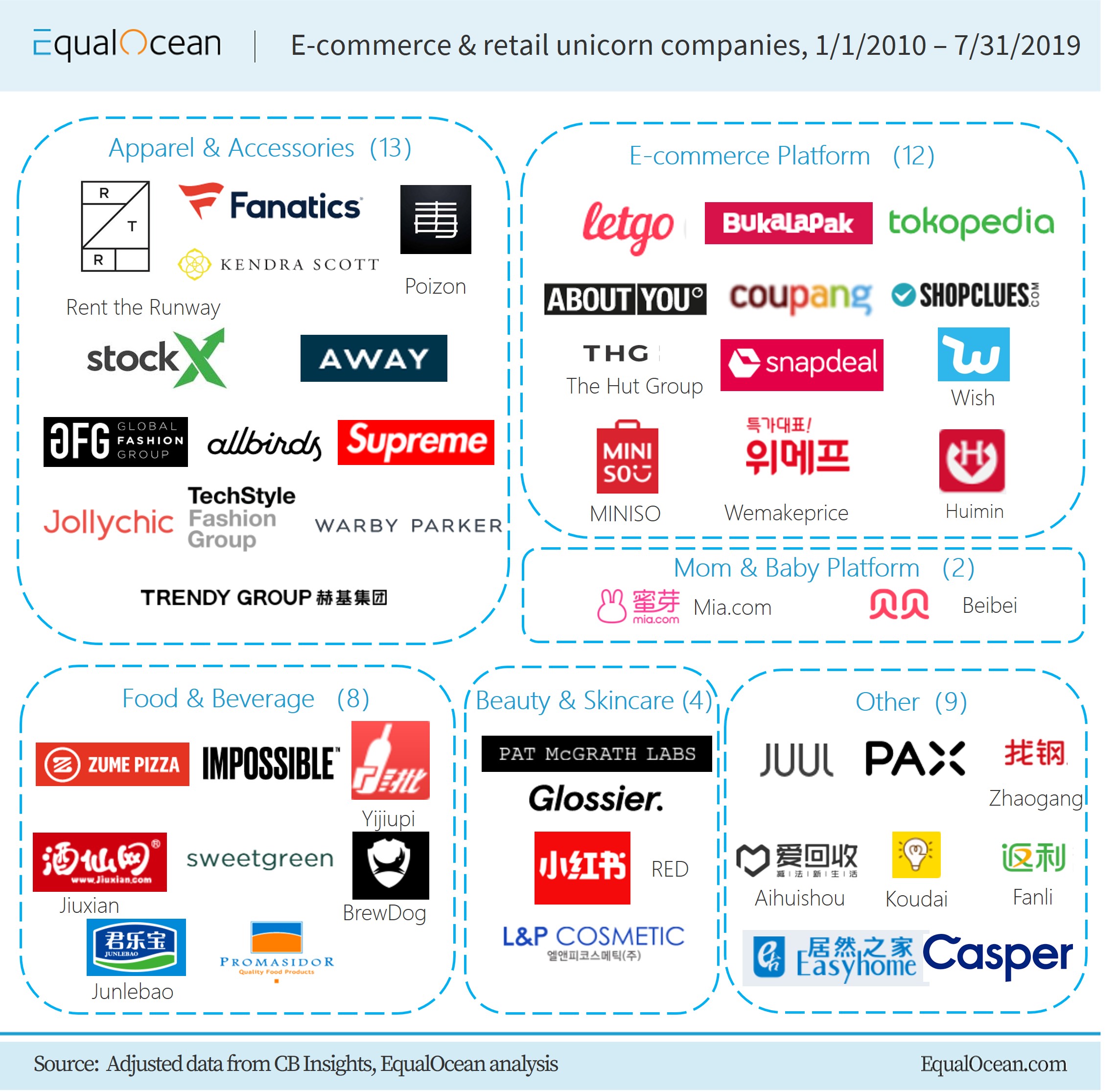 Apparel & accessories and e-commerce platform are two sectors that have brooded most unicorn companies.

9 out of 13 companies in apparel & accessories are from the US, including the rapidly growing company Away, best known as a luggage designer, manufacturer and retailer, and surprisingly old brand Supreme, the skateboarding shop and clothing brand that made its debut 23 years ago in New York.

Two more brands -- the Poizon (also known as DU App, 毒) from China and StockX from the US -- are platforms for buying and selling limited edition and high demand sneakers. With most of their users being male, also unveils an increasing trend of male consumption.

"Men Are Shopping Like Women", a heading from Wall Street Journey by Ray A. Smith, who also stated the shifting trends in male consumer's behavior. "In a big shift, men are seeking out style trends, making impulse purchases and taking time to browse."

Back to sectors, the high concentration of US unicorns shows the cultural dominance or the influence over the world. In contrast with apparel & accessories, the e-commerce sector is more diverse with players from not only the US but Indonesia, South Korea, China, the UK, Germany and India. Most of the companies in the e-commerce sector were founded between 2010 and 2015 and made swift growth around 2015, taking advantages of the Internet premium.

The food & beverage sector saw China's preference for wine and liquor as two out of three unicorns Jiuxian and Yijiupi are doing wine business. The US seems to favor food companies more since three unicorns in this sector are all food-related -- Zume Pizza, Impossible food and Sweetgreen.

A series of global unicorn companies analysis is accessible on our website. Learn more here:

2B Software Disruption Accelerates: A Look into Global Software Unicorns

Multidimensional Analysis of Global AI Unicorns: How do they grow and expand?