By far, even though main BMI solutions are one-directional with the most common uses for people with brain injuries, it is still being considered as a human enhancement channel. 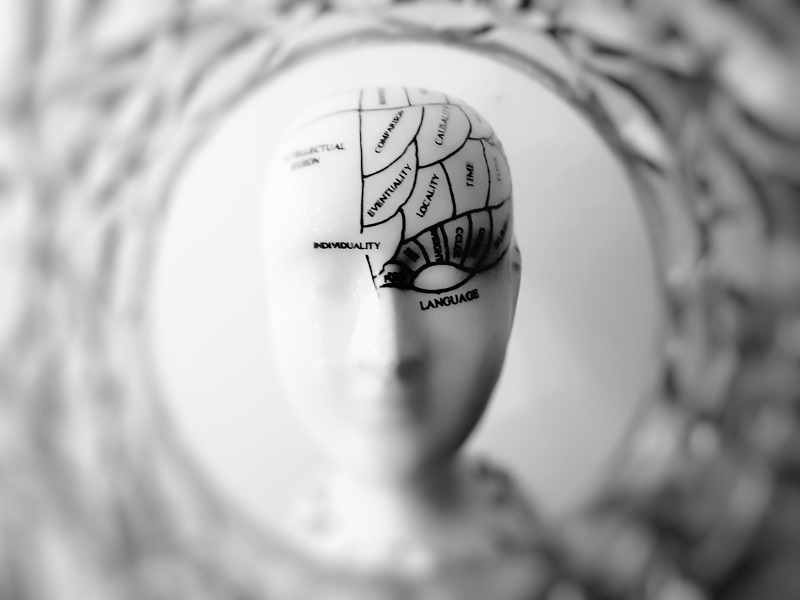 Brain-machine interface (BMI) is a direct communication pathway between brain and external devices. Through a device that allows for bidirectional information flow between the human brain and machine, BMI is often used as assisted living devices for individuals with motor or sensory impairments. Apart from using in the healthcare industry and special demands from the military, other downstream applications like education and entertainment have emerged also.

How to build the bridge between brain and machine?

Presently, three common pathways between the brain and the object to be controlled are invasive BMI; partially invasive BMI; and non-invasive BMI. Across these successive variations the resolution of the signal shrinks as the connection gets less invasive.

Invasive: This requires surgery to implant electrodes under the scalp; it will provide a more accurate reading of brain signals but carries a high risk of surgical side effects. Scar tissues may form which can make brain signals weaker.

Partially invasive: The devices are implanted inside the skull but rest outside the grey matter; this has a lower risk of forming scar tissue in the brain than fully invasive ones.

Non-invasive: Employs EEG-based interfaces which are easy to wear and do not require surgery. Enables a broader variety of applications but carries relatively poor signals. 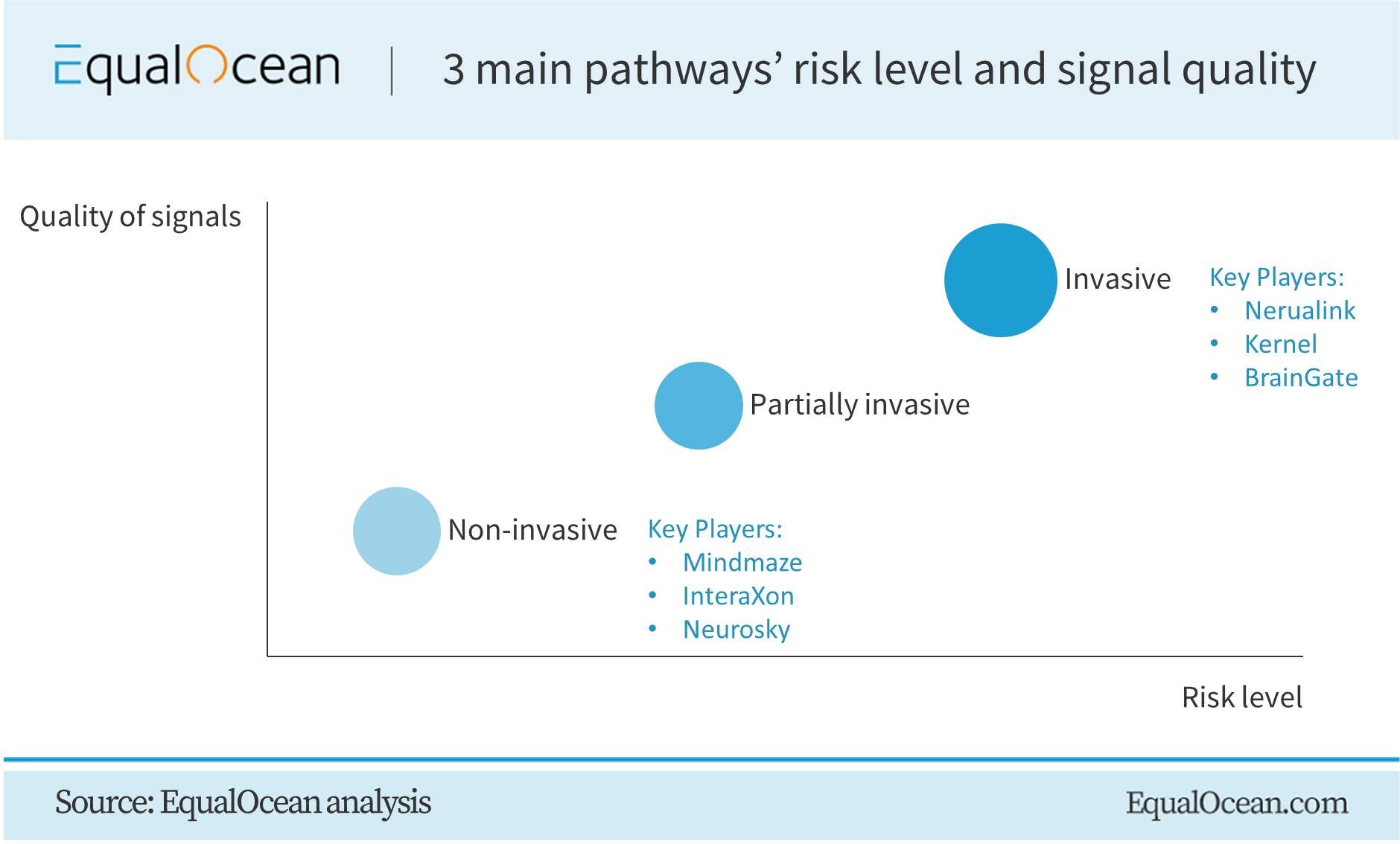 Overall, there is no common best BMI for users, it depends on numerous factors and varies according to different needs.

If direct control of the human brain over the machine can be realized, then efficiency will be greatly improved; when an effective signal can be transmitted back to the brain, the boundary of the human brain will be expanded and integrated with a machine which can be adapted for an extraordinary variety of tasks. For example, neurotechnology could be used to improve our perception and upgrade the quality of our decision-making.

However, so far, the applications are limited due to the technology threshold.

Analyzing and interpreting data collected from these BMI systems is not an easy job. The brain is a super complex system composed of tens of billions of neurons, and the current technology captures electrical signals rather than actually cracking the coding of the brain's neurons. Accordingly, in terms of the interaction level, the efficiency of a BMI has not reached that of a healthy brain or computer.

Under these circumstances, one of the best applications for BMI by far is the restoration of sensory and motor function and the treatment of neurological disorders. For example, through real-time monitoring of an epilepsy patient's brain signals, prognosis and early intervention could control the condition. The SKUs being limited, many companies in this frontier have a B2B model, and the current contribution margin is likely to remain close to that of medical devices. In North America market, an active section of market share also belongs to gaming.

However, apart from healthcare and games, these cutting-edge technologies may also be applied in future in the military and aerospace areas. The United States’ Defense Advanced Research Projects Agency (DARPA) is supporting BMI initiatives through a number of programs, such as the Next-Generation Nonsurgical Neurotechnology (N3) program.

The global BMI market was valued at USD 980 million in 2018 and is expected to accelerate by 11% CAGR up to 2026. In the current market, 38.8% of the market is captured by the non-invasive BMI segment, owing to the high applicability. Of this, North America contributed 42.3% in 2018, mainly from applications in computer games and neural disease treatment. North America, Asia Pacific and Europe have been considered the main market drivers for the future. Here we will list three standout names, including overseas and domestic players.

One of the leading teams on the invasive BMIs frontier, Neuralink was founded by Elon Musk in 2016; he has injected USD 158 million into this business. Neuralink's first step toward a scalable ultra-high bandwidth BMI system is building arrays of small and flexible electrode 'threads', with as many as 3,072 electrodes per array distributed across 96 threads. Neuralink has also built a neurosurgical robot capable of inserting six threads per minute.

Founded in 2015, BrainCo produces non-invasive wireless EEG headbands to detect brain activity and measure different brain states, such as depth of focus, relaxation, and meditation. Its products are mainly used in areas ranging from education to Olympic athletics. The total funding amount of BrainCo is USD 6 million.

Neuracle (博睿康) is a neural technology company based in Beijing, which provides clinical solutions for neurology patient care, functional neurosurgery and neural. It was incubated at the Tsinghua University neural engineering lab. The current approach of Neuracle is B2B, targeting customers such as hospitals and research institutions. Founded in 2012, its total funding amount is about USD 8.5 million, and they just finished their Series A in August.

EqualOcean recently intervewed Mr. Huang Xiaoshan (黄肖山), founder and CEO of Neuracle, discussing the technology achievements and limitations, also envisioning a future with neural connectors. "We pursue applications which have higher threshold and long-term technological breakthrough instead of products of short-term hit, that is why currently we have inclination on medical institutions. BMI’s ultimate goal should be merging the superiorties of human brain and machines, and then extanding the boundary of human beings", said Mr. Huang.

Are we in control of the consequences while achieving human enhancement?

BMI could change the way people think, soldiers fight and doctors treat neurological diseases; however, ethical concerns accompany BMI development. For example, products which could be used for monitoring the concentration level of students have faced criticism, as they haven't provided students with practical solutions for enhancing their focus through the interaction of brain and machine. To some extent, the bidirectional information flow is still on the way – which is indicative of the safety problems that have hampered progress.

Beyond the privacy issue, more serious moral questions remain – particularly about where the human ends and how intelligent the machine could become with a human brain supporting it. The combination of brain and computer has  been considered to be potentially more powerful than AI.

Many countries have published policies encouraging brain science development, while regulatory departments have to simultaneously control the tests’ scope . For example, DARPA's program is under the guidance of external advisors with expertise in bioethical issues and is heavily engaging the FDA to make sure its tech is safe for human use. Neuralink's human trail, a new set of thin electrodes within 'threads' that are inserted by a ‘sewing machine for the brain’, are also awaiting FDA approval.

"Neuroethicists are working to give advice to policymakers about what should be regulated. I am quite confident that, in the future, we will be more open to the possibility of using BMIs if such systems provide a clear and tangible advantage to our lives", said Davide Valeriani, senior research officer at the University of Essex's BCI-NE Lab.