After surpassing JD.com by market cap, Pinduoduo became the second-largest online retailer in China. What's behind its commercial success? 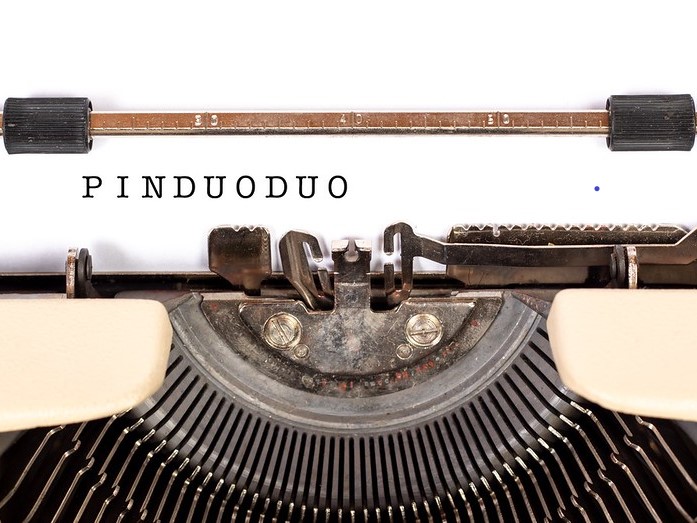 Pinduoduo – a four-year-old company that has grown into an e-commerce giant in a Chinese market that was once dominated by the duopoly of Alibaba and JD.com – has recently seen its stock go through the roof. After soaring by 12.56% on October 24, the firm’s market cap hit USD 46 billion, which means that it took Pinduoduo only two months to become the fourth-largest Internet corporation in the country after the firm surpassed Baidu in August of this year.

Shanghai-based Pinduoduo was founded by former Google engineer Colin Huang in 2015. During the intervening time, profit margins uplifted by the exponential growth of China’s Internet traffic over the last decade started to diminish; Alibaba and JD.com have also already established their solid status as dominant powerhouses in the sector.

The market insiders doubted that there was still space in China’s e-commerce marketplace for new entrants to grow. However, Pinduoduo provides its own solutions by targeting value-for-money merchandise and creating fun and interactive shopping experiences.

Walking through the historical development of Pinduoduo, fast growth has always been one of the central concepts of the company. Their funding history has been accompanied by rapid growth in Gross Merchandise Volume (GMV).

Officially launched in September 2015, Pinduoduo just reached a monthly GMV exceeding CNY10 million in February 2016, just half a year after its operations started. In July 2016, with a Monthly Active User (MAU) amount that surpassed 100 million, Pinduoduo raised USD 11 million in its Series B round of funding.

After only one year since it started its operations, the GMV of the platform soared to CNY 1 billion in September 2016. And it took Pinduoduo only a quarter for this number to sharply increase to CNY 2 billion at the end of 2016. 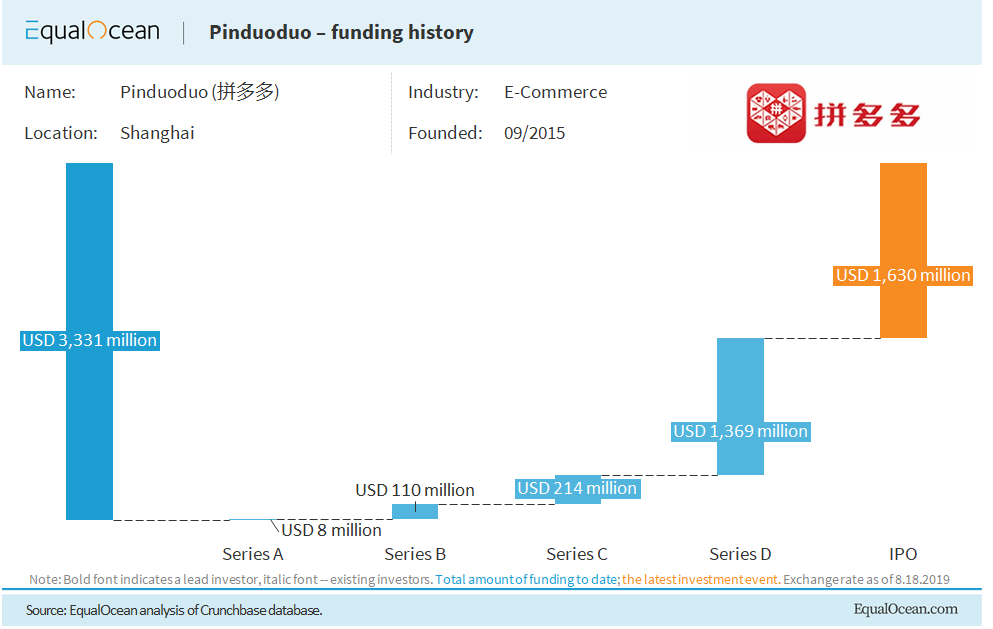 Pinduoduo then completed its Series C funding in February 2017, raising another USD 214 million. Its monthly GMV doubled again within only three months, reaching CNY 4 billion in March 2017. Impressed by its strong operating figures, the Chinese tech behemoth Tencent poured over USD 1.4 billion into the Series D funding of Pinduoduo.

After a total of USD 1.7 billion was raised in funding over four rounds, with leading investors like Tencent, Sequoia China, IDG Capital and Gaorong Capital, within less than three years Pinduoduo was listed on the NASDAQ stock exchange on July 26, 2018, at an IPO price of $19, where it raised USD 1.6 billion, making the deal one of the largest IPOs of the year. By comparison, JD.com went public ten years after its founding; Taobao made it after seven years.

Part of the reason lies in the fact that these predecessors made great contributions to the development of China’s e-commerce industry, enabling late entrants like Pinduoduo to grow under better circumstances.

On top of this, it shouldn’t be forgotten that today’s success for Pinduoduo is largely based on: 1. its ‘team purchase’ concept, which uses the power of social networking efficiently though “inviting social contacts to form a shopping team to enjoy the more attractive prices available;” 2. the idea of building its business on an integration of the ‘Costco’ model and the ‘Disneyland’ model, which stands for ‘value-for-money and entertainment combined.’

In its first year of listing, the stock of Pinduoduo did not show a very decent performance. In the first full week, after it was listed on NASDAQ, Chinese regulators launched an investigation (in Chinese) into the company for selling counterfeit goods.

This was followed by Pomerantz LLP, one of the foremost securities litigation firms in the United States, announcing a class action lawsuit against Pinduoduo, contending that its revenue was traceable to unlawful conduct and misleading investors. With the company affected by the issues above, the mainstream financial institutions worldwide were generally skeptical about the profit model of the business, which cast a shadow over the prospects of the company.

The turning point that ended the ongoing decrease in the share price of Pinduoduo was the announcement of its 2Q 2018 results. In this financial report, which was also the first one since Pinduoduo went public, we saw strong operating performance across several dimensions. 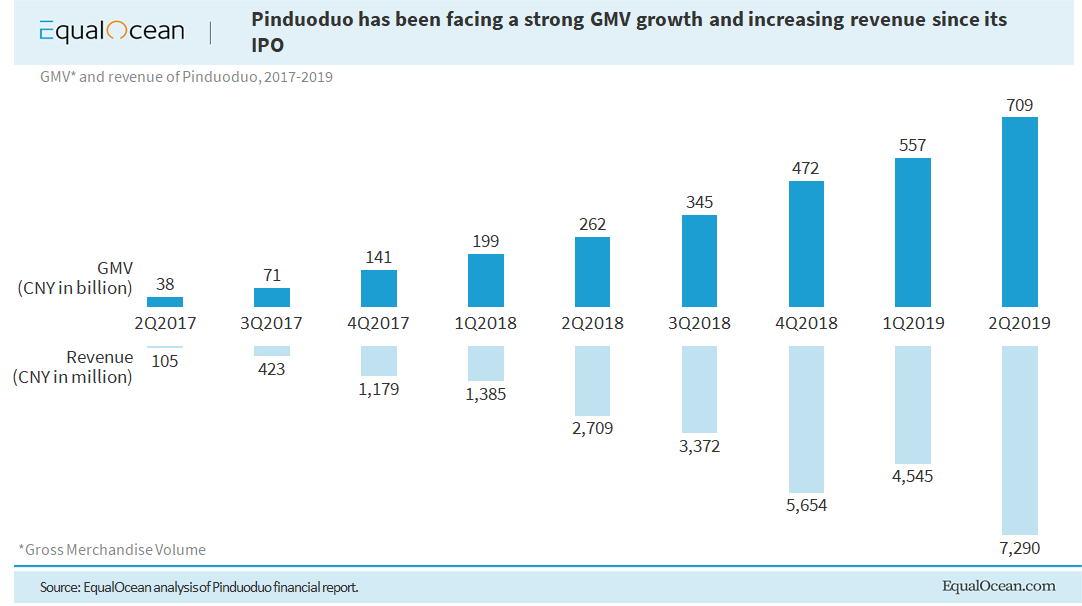 Besides, on August 22, Pinduoduo also disclosed (in Chinese) its progress in controlling counterfeit goods. During the period of August 2-9, 1128 stores were forcibly closed, nearly 4.3 million pieces of goods were removed, and more than 450,000 pieces of suspected counterfeit goods were intercepted in batches. These figures gave investors a reassurance, which was then reflected in the upward movements in Pinduoduo's share price.

The next wave of the downward trend started from October 4, which was a structural fluctuation that affected China Concept Stocks collectively. However, a more convincing reason behind the share price of Pinduoduo continuing to decline lies in the commercial war initiated by Alibaba.

Around October 10, nearly all of the brands that had been invited to Pinduoduo's three-year celebration offer were forced by Alibaba to take their sides –  to either exit Pinduoduo's event before it started and discontinue selling products on Pinduoduo, or lose the qualification to participate in the ‘Single's Day’ event on Tmall.

Alibaba did not comment with respect to this issue at the time. However, on October 15, 2019, Wang Shuai, Alibaba’s PR head, admitted on the social network for the first time that Alibaba did 'take sides' in reaction to its rivals.

On November 20, 2018, Pinduoduo announced in its 2018 3Q results that its revenue had reached over USD 491 million (697% year-over-year growth) – a number which far exceeded the expectation given by Bloomberg of USD 438 million.

Based on Pinduoduo’s good operating performance since it went IPO, analysts from several mainstream financial institutions – including UBS, JPMorgan, and Goldman Sachs – initiated coverage of Pinduoduo with a buy rating, right before the company announced its first annual report.

However, things were not going in the way that most analysts expected. After Pinduoduo announced its 4Q 2018 results and its 2018 annual results, its share price tumbled 17.45% on the day, marking the biggest drop in a single day since its listing. 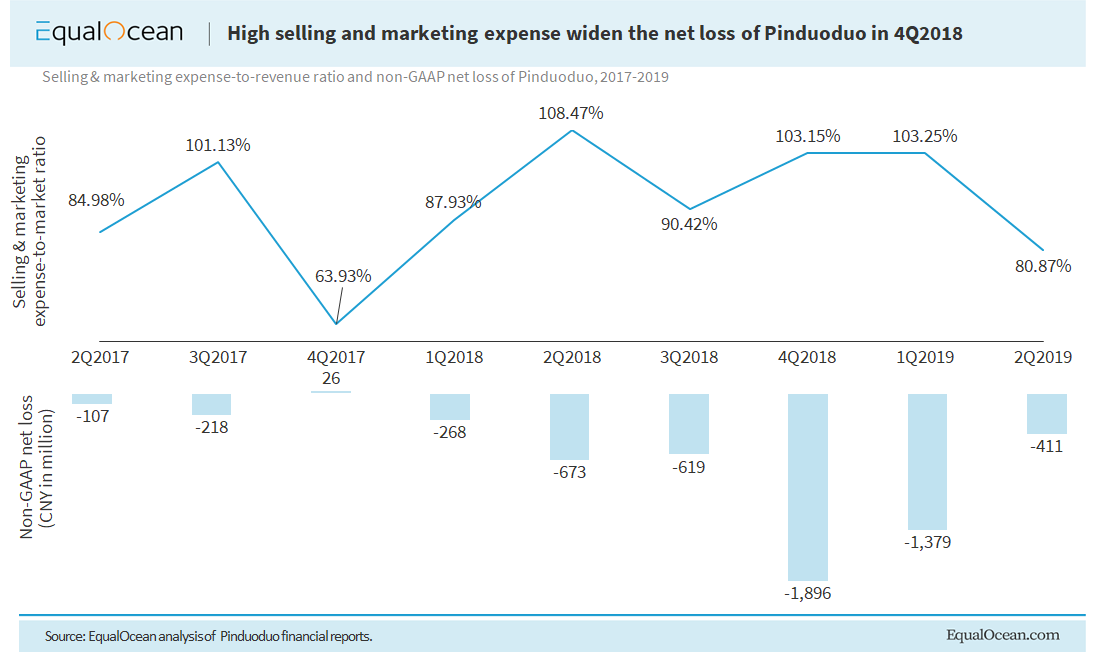 Although both the GMV and the revenue of Pinduoduo rocketed during the quarter, the tremendous increase in sales and marking expenses and thus the huge worsening of its operating loss was far more than what was expected.

This made investors start to doubt that if Pinduoduo was making an overdraft on itself in exchange for short-term success. By the time, comments like “eventually they sell more and lose more” formed a general view on the market.

The primary reason for the selling and marketing expenses to sharply increase and thus widen the company’s net loss lies in its commercial strategies:

1. In order to boost average spending per user and thus raise its GMV, Pinduoduo increased its subsidy for 3C digital products with high unit prices to attract new users from top tier cities and to encourage more current users to purchase more expensive SKUs on the platform. During its ‘Singles Day’ campaign, the subsidies on Apple's mobile phones alone were more than 1 million Yuan;

2. Pinduoduo increased its promotion on its ‘new brand support plan,’ which was one of the main focuses of the company in the next stage;

3. As the Spring Festival got closer, Pinduoduo increased its advertising on TV to create a better image;

“Money is a tool rather than a purpose,” according to Colin Huang, CEO of Pinduoduo. Now it seems that the choice of Pinduoduo to pour money into campaigns to acquire new customers and to strengthen the barrier of its ‘team purchase’ model is worthwhile.

In fact, the abundant cash position on its account is enough to support the cash-burning marketing activities for a few more years. And theoretically speaking, as long as the cash on Pinduoduo’s account does not bring a halt to its continuously growing trend, the company could go on with these cash-burning campaigns into the future.

On the crest of the wave

On August 21, Pinduoduo released its 2Q 2019 financial report. The outstanding performance of the company during the quarter caused its share price to rise 15.99% and the momentum was carried over the next several days.

During its ‘618 shopping festival’ campaign, Pinduoduo continued its ‘10 Billion Yuan Subsidies’ strategy that it launched during the last ‘Singles Day’ campaign. And at this time, it ended up with a completely different story that the market responded positively to.

2. Due to the improvement in the cost controlling ability of Pinduoduo, its Non-GAAP Net Loss Attributable to Ordinary Shareholders dropped dramatically;

3. Better user structure: the contribution of users from top-tier cities continuously increased from 37% in January 2019 to 48% in June 2019;

4. Annual spending per active buyer on the platform increased dramatically, from 763 to 1,468 CNY/year, a 92% year-over-year increase. 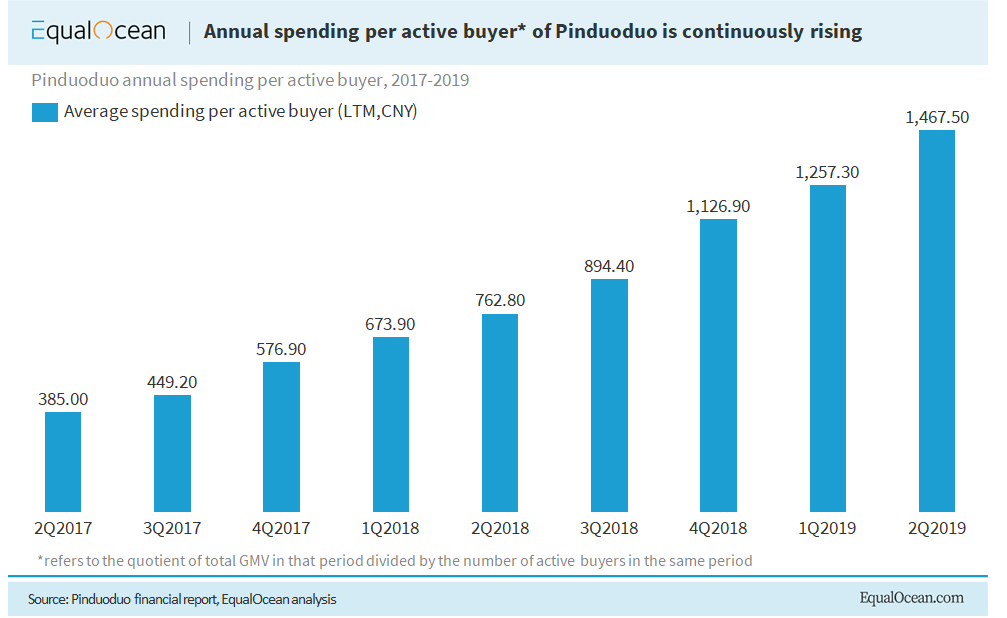 On October 10, Colin Huang, the CEO of Pinduoduo, said that GMV on Pinduoduo has actually surpassed that of JD.com, which was two years ahead of schedule. With this momentum, the share price of the company continued to increase and with a 12.56% jump in a single day, its market cap finally surpassed JD.com on October 24. And these imply that Pinduoduo has become the 2nd largest Chinese e-commerce platform in real terms and on multi-dimensions.

Pinduoduo is now recording a Price-Sales (PS) ratio of 15.89 (TTM), which is one of the highest among all the NASDAQ-listed firms with a market cap exceed USD 30 billion, suggesting the market is holding an optimistic attitude towards the prospects of the company.

The 4-year-old Chinese e-commerce platform created its own myth based on business growth to become the most important upstart in this competition-intense industry. Stock prices rarely reflect the true value of companies, especially in the short-term – the historical price pattern of Pinduoduo demonstrates this story aptly.

For itself, this period of time that has elapsed since its IPO is the process for it to improve governance, enrich strategies and become more standardized.On the other hand, for the market, it was the progression to form cognition and adjust its general attitude to the ‘team purchase’ model and ‘value-for-money’ idea of Pinduoduo.

Today's Pinduoduo is undoubtedly one of China’s new e-commerce giants, which means it will face more and more challenges from both the market and its peers. The three months at the end of the year are always a time for the most intense battles between all the retail players. With ‘Singles Day’ approaching in the next few days, who will win the ultimate campaign of 2019, based on what kind of strategy, will be a very interesting thing to observe.