With the current soaring trend in virtual and augmented reality, evolution of autonomous machinery, and smart devices infiltrating every aspect of our lives, the consumer technology industry is very promising. 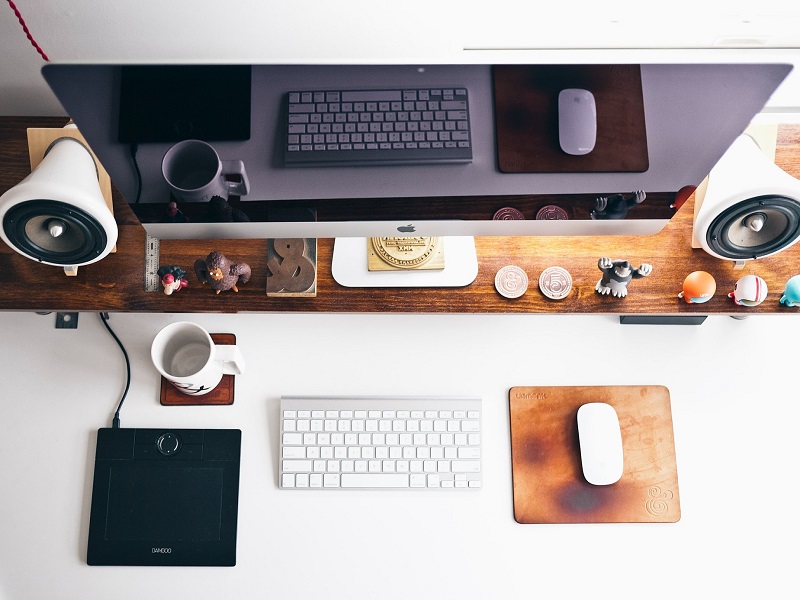 The technology industry is thriving, amidst the emergence of the 4.0 industrial revolution. The innovative technologies will create powerful ecosystems around consumer data. This will create tremendous implications for consumers by giving them more choice, convenience, control and access to new models of consumption.

In recent years, we have seen the expansion of 5G network coverage. 20 times faster than its preceding network generation, the technology has not only provided new opportunities for numerous industries, but also transforms people’s lifestyle. For instance, as security and speed increases, transactions can be done instantly on users’ devices. In agricultural sector, 5G network further optimizes processes, such as water management and crop monitoring, increasing its efficiency and profitability.

The spread of 5G technology will undoubtedly simultaneously increase the installation of IoT devices. As a result, data analysis will be much faster, more accurate and integrated, hence driving its costs down. Smart cities model would also be achievable at a much faster rate. Data collected from sensors around a city’s corner can be used to construct a 3D virtual representations that would help the city to evaluate its problems, such as flooding, traffic and energy consumption.

AI is another technology sector that is on the rise. The power of today’s computing system has allowed us to substitute dangerous works often performs by human and eliminates all aspects of human errors. AI can be applied to a wide variety of applications, including robots development, creating personal recommendations on online media platforms, to weather forecasting.

AI can be used in a wide variety of applications, including automation and autonomous driving. Tesla introduced its fully self-driving car back in 2016, which began to disrupt the automobile industry. Meanwhile, autonomous drones serve multiple functionalities such as infrastructure inspections, field surveying, and goods delivery to rural villages.

According to the Consumer Technology Association (CTA), cutting-edge technology contributed a staggering USD 377 billion to the entire consumer technology industry in 2018. The rapid development of LCD TVs and smartphones are the main driving force for the industry’s strong growth, while Inventive products in the emerging market such as smart homes and streaming services continue to appeal consumers.

4 verticals, namely wearables, smart homes, small home appliances and sports equipment, under the consumer technology industry are selected for an in-depth analysis. Each of the vertical is defined in the following section.

Wearable technology products can be considered as any worn goods that have electronic devices such as software or sensors, incorporated in it. These electronic devices have a smart assistant functionality to monitor certain conditions, often transferred to cloud services and, by software. The concept of wearable technologies have appeared since the 1970s, but it wasn’t until 2012 that technologies such as smartwatches emerged and began to popularize.

The world is going smart, with the terms smart homes, home automation, smart buildings, and even smart cities on the rise. Smart homes are any home devices or appliances that can be remotely controlled through mobile or networked devices. Various control functionality such as home security, temperature, lighting, fire alarm etc, are usually integrated into the system.

Rapid urbanization in major cities around the world have been experiencing similar challenges such as high living costs, growing crime rates, increased in pollution level. These combines with the public’s rising disposable income, widespread awareness of health, safety and environment etc., have driven the demand for smart homes at an unprecedented rate.

The sports equipment that is referred to in this article are the devices that would escalate athletes’ convenience and experience, monitor and enhance their performance in doing physical activities. Typically known as quantified athlete, devices that are referred to are the main tools of that particular sports being embedded with electronic devices and sensors. Sportswear such as fitness trackers is not included in this section as it would overlap with the wearables section. In addition to this, innovative board technologies are included as well. 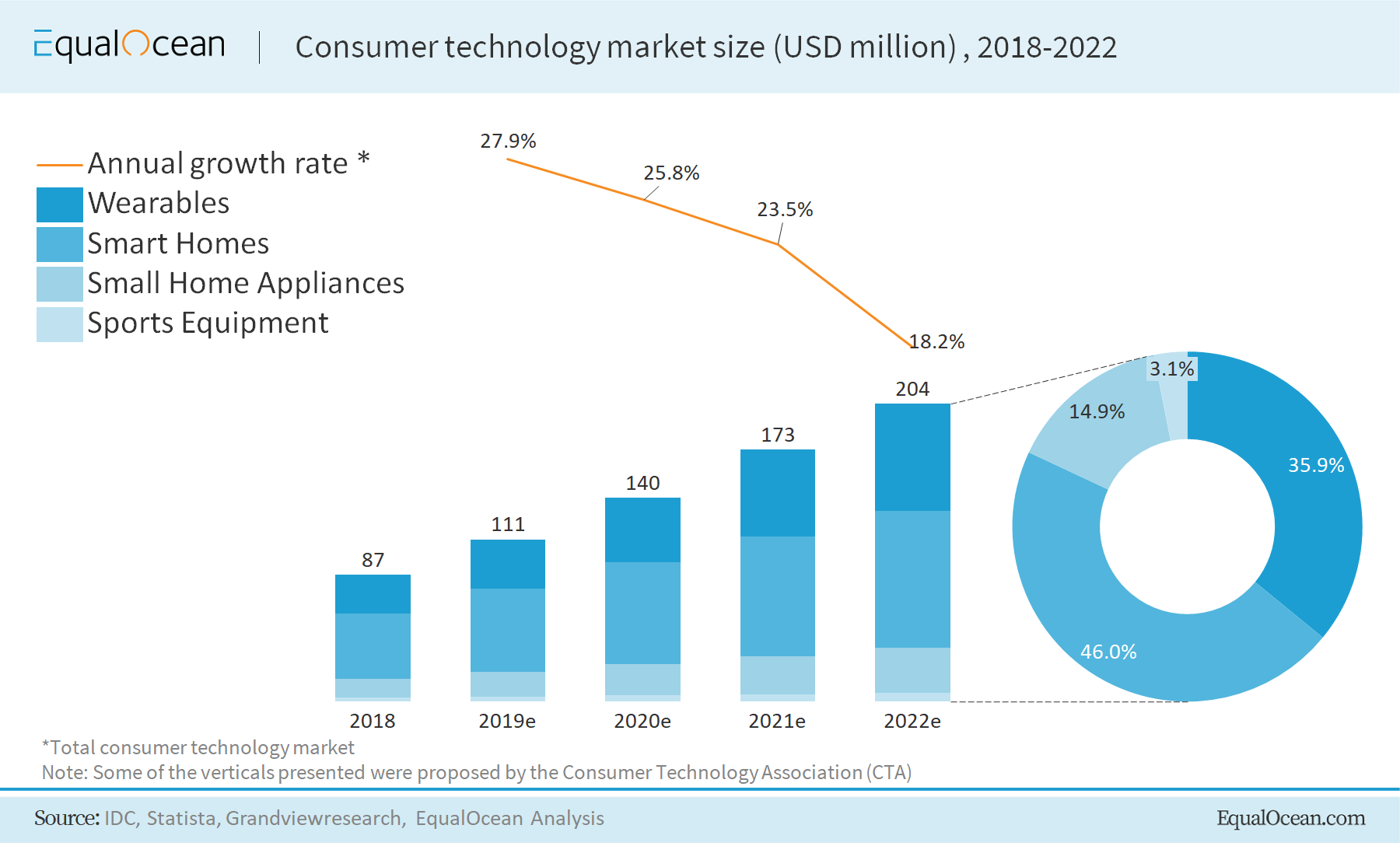 Overall, the industry’s market size has a positive outlook for the next few years. However, the industry’s market is expected to grow at a decreasing rate, mainly due to the performance of smart home and small home appliances. It is estimated that the industry’s revenue in 2019 is USD 111 billion and is predicted to reach USD 204 billion in 2022, with a Compounded Annual Growth Rate (CAGR) of 23.4% for the 2018-2022 period.

Data provided by IDC also shows that the wearables market is dominated by handful of vendors such as Apple, Xiaomi, Fitbit, Huawei, Samsung, Garmin and Fossil. Fitbit, which focuses on the production of smart fitness trackers, started strong in 2014 with 37.9% of the market share, but slipped eventually to just 8% in 2018, behind Apple and Xiaomi. By Oct 31, Fitbit had announced for its agreement to be acquired by Alphabet (Google parent company) for USD 1.2 billion. This move will boost Alphabet’s presence in the market, challenging the market leader, Apple.

It is reported that Apple’s wearables business is growing at a stunning 54% in the third quarter, with sales forecast to reach 30 million units by 2020.

Prominent Chinese technology company Xiaomi, is displaying a good performance in the wearable sector, and holds the second largest market share - 13.5%, while its local rival Huawei has captured only 6.6%.

The smart home and small home appliances are growing with diminishing rate. This is possibly due to the nature of the products that do not need a frequent replacement. For the smart home, a report released by IDC shows that the home entertainment category contributes to the largest percentage of shipments, with 339.8 million units in 2019, equivalent to 41.7%. However, it is predicted to fall to just over 29.9% in 2023. The home security sector, however, is anticipated to expand the most, from 15.2% in 2018, to 22.1% by 2023.

Amazon is on the verge of establishing itself as the market leader in the smart home industry. With the previous acquisition of a mesh home router producer, Eero, and the home security company Ring, Amazon is able to integrate these systems to provide a full-service-set of option for homeowners. Furthermore, Amazon has increased its investment on smart homes significantly, introducing dozens more Alexa-enabled products.

Amazon and other four other major players in the industry, including Nest, Honeywell, Xiaomi and Netgear, together accounted for 34% in global shipments, and 36% in global smart home revenues.

Small home appliances is a USD 12.9 billion industry in 2018, and can be further segmented into several more categories. Small kitchen appliances topped the list, with 54.6% of the market share, followed by vacuum cleaners, 27.1%. The main driving force in this sector is the value-added features of the upgraded small home appliances and also the rising population and purchasing power of consumers.

Sports technology consists of the smallest market size in the whole consumer technology industry, but is growing at a steadily. EqualOcean estimated that in 2018, the industry contributed USD 2.97 billion, and is expected to double to reach USD 7.58 billion in 2023, with a registered CAGR of 16.2% during the forecasted period.

The recent growing trend in technology derives from data-driven sports culture. To no surprise, basketball remains the forefront in the utilization of technology, with the invention of devices such as the Wilson X Connected Basketball, which is capable of tracking athletes’ performance on the field. 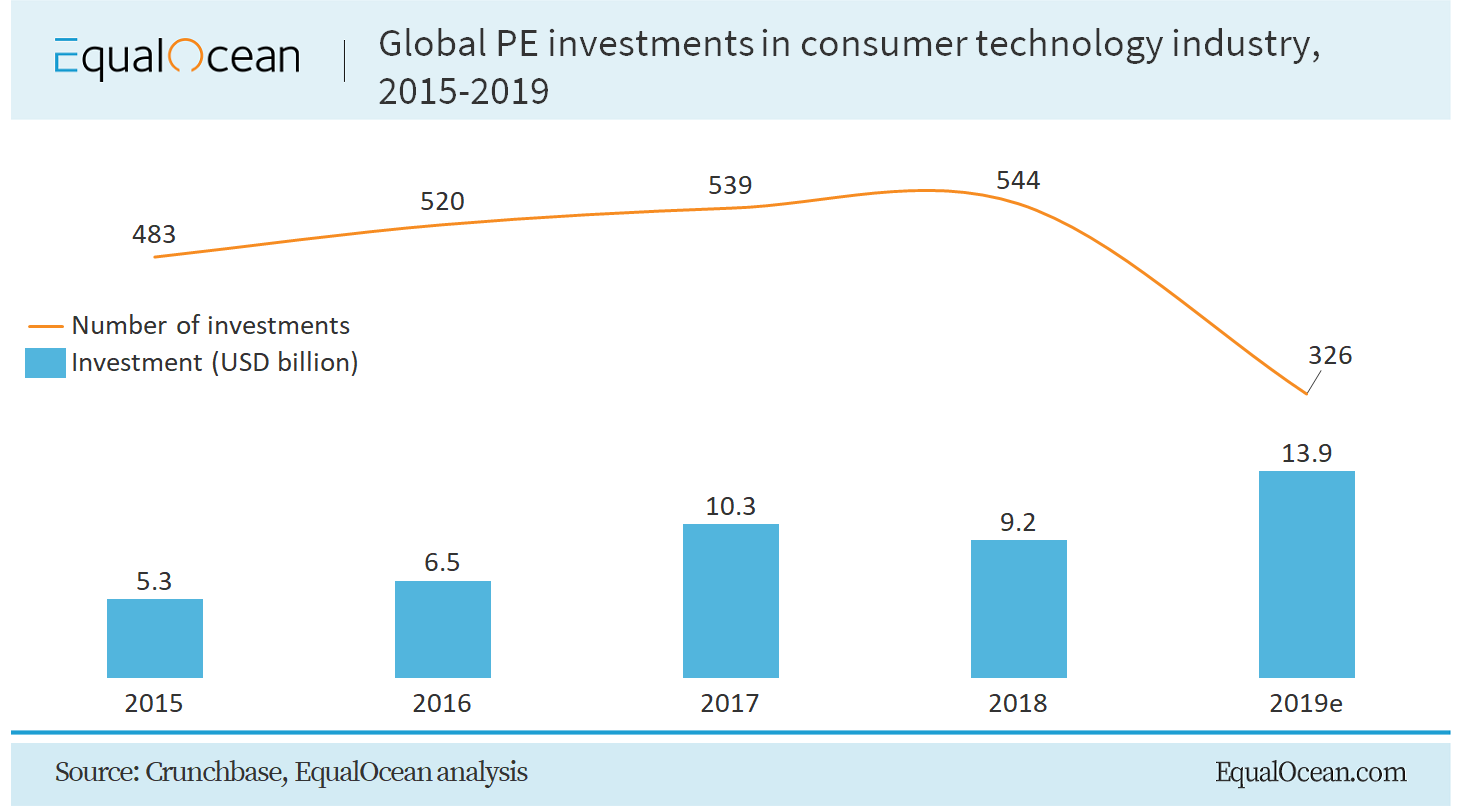 Based on Crunchbase's dataset, the investment injected on the consumer technology industry in 2015 was approximately USD 5.3 billion and has generally increased and doubled its value to surpass USD 13.9 billion in 2019. The number of investments from 2015 increases slightly and peaked in 2018, with 544 investments, before dropping drastically in 2019 to just over 300.

This might be caused by companies in the consumer technology industry moving towards the later stage of funding. Even though fewer companies manage to successfully enter the later stage of funding, but they are characterized by larger amounts. Number of private equity round in 2019 decreases from 19 to 11 compared to the previous year, but its value surged from just USD 173 million to USD 7.59 billion during the same period. The diminishing number of investments in the consumer technology industry can be also be explained by the general decline of global venture capital investments.

CONTACT US
Scan QR code to contact us for professional consulting services
Next article
Saturnbird Coffee, Nestlé Rival in China, Raises Tens of Millions of Yuan