The nascent Chinese e-commerce giant has disappointed investors with its latest financial results. We unwrap the company’s latest results to watch the interplay between its business achievements and market performance. 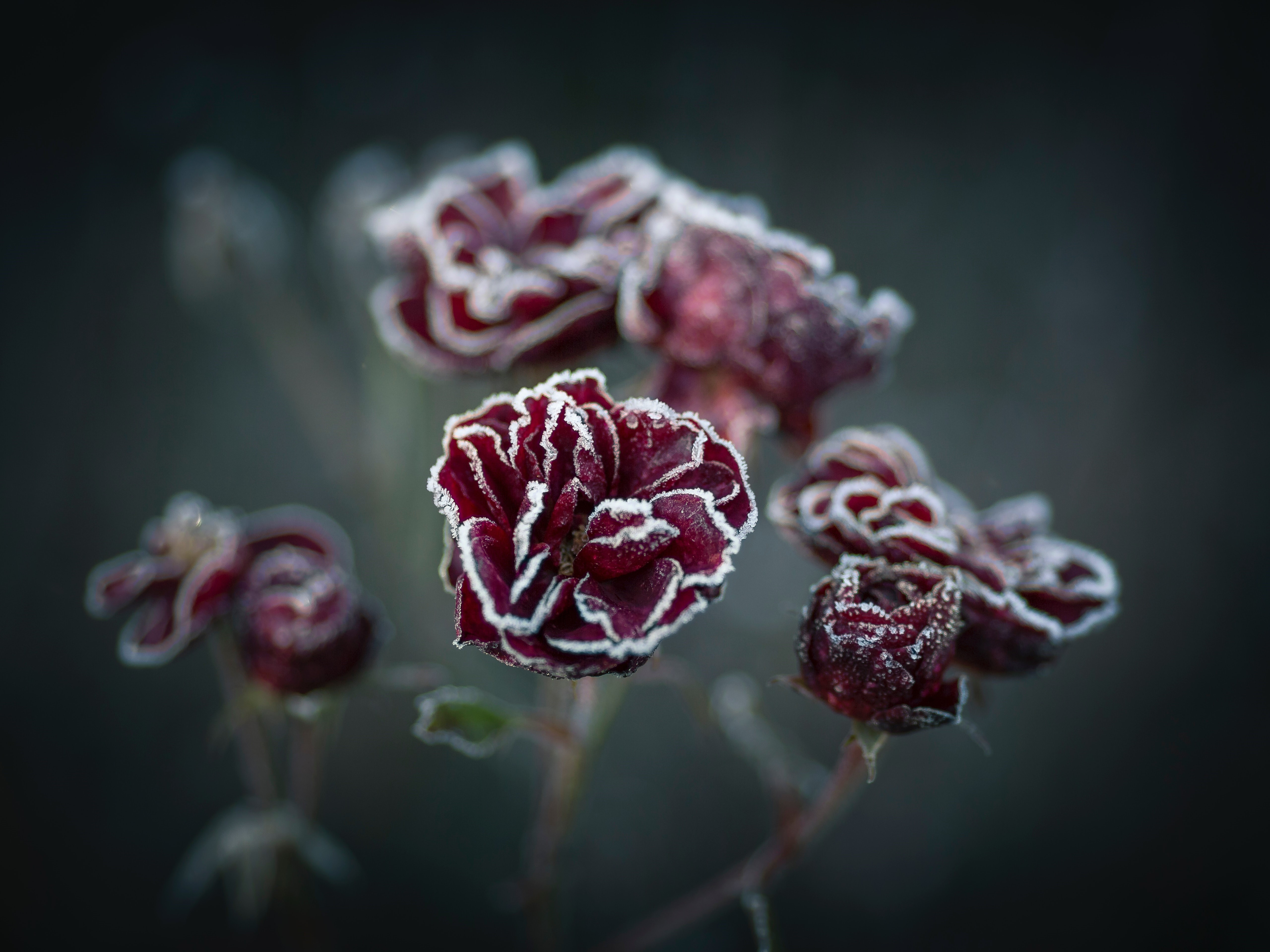 On November 20, Pinduoduo’s stock witnessed its biggest drop since the young juggernaut held an IPO in July last year. The 22.89% plummet – reducing its market capitalization by more than USD 10 billion – was triggered to a large extent by its worse-than-expected quarterly results.

The company reported a Gross Merchandise Volume (GMV) for the last twelve-month period ending September 30, 2019, of CNY 840.2 billion (USD 117.5 billion), implying a quarterly GMV of RMB 249.4 billion, which is below the average analysts’ estimation of RMB 285 billion.

Based on its staggering growth rate in the past, investors tended to be too optimistic regarding the continuation of this trend. In this case, as long as Pinduoduo fails to meet the consensus in terms of growth, the company has to face huge pressures from the market.

The somewhat disappointing GMV could probably be attributed to the fact that the company invested hugely in sales and marketing – especially regarding computers, telecommunications and consumer electronics (3C products) – to boost its Average Selling Price (ASP) along with attracting more users from top-tier cities. However, things did not turn out as they expected. 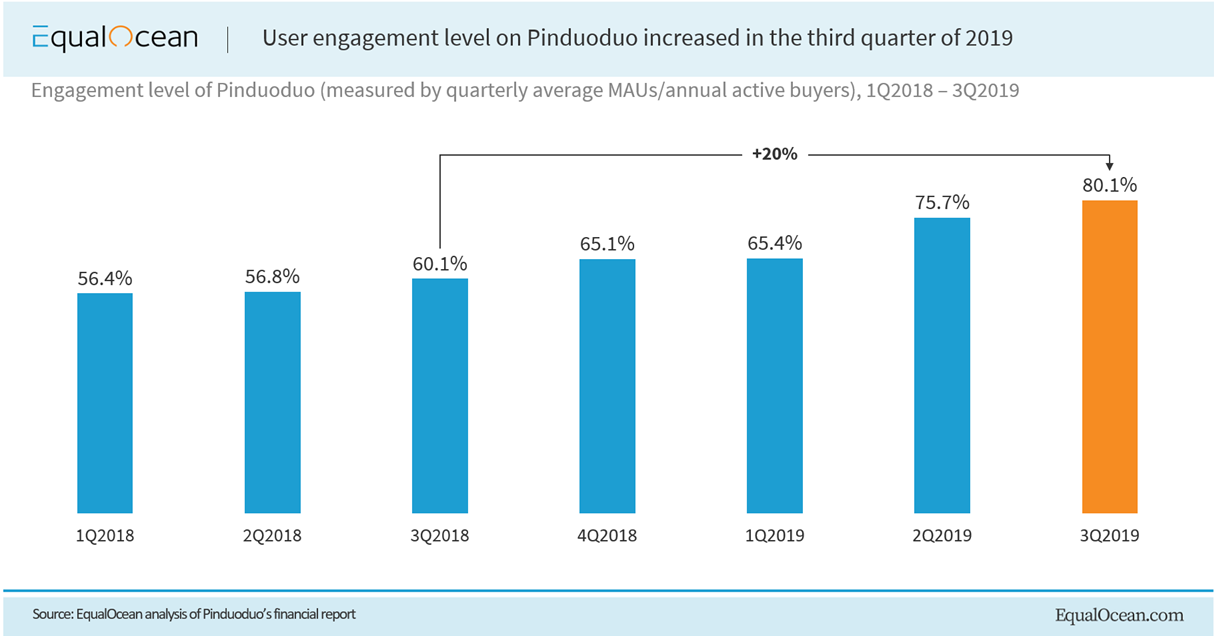 In the three months ending September 30, 2019, the quarterly GMV/active buyers declined sequentially despite sales and marketing expenses enhancement, according to SeekingAlpha. On the other hand, the users’ engagement level – measures by MAUs/annual active buyers – observed an upward trend this quarter, possibly simulated by its aggressive marketing campaign. In spite of this, if we look into both indicators in combination, these strongly suggest that much of the purchasing activities gravitated towards low-value units, which somewhat counters the ultimate goal of Pinduoduo, at least for now.

This fact becomes somewhat puzzling when taken together with the information disclosed by Colin Huang Zheng (黄峥) – CEO of Pinduoduo – during the earning conferences in recent quarters.

According to Mr. Huang, the proportion of users who came from the first- and second-tier cities contributed 48% of GMV by June 30, 2019, representing a sharp increase from the 11% figure recorded by January 30, 2019. Besides, he also mentioned in the third-quarter 2019 earnings call that the average annual spending per active buyer from primary users on the platform has already reached CNY 5000.

Based on the above information provided by the management, the drop in quarterly GMV/average MAUs is likely to be attributed to the following reasons:

1. Users from upper-tier cities who spend more on the platform tend to have a lower retention rate, which implies that a considerable proportion of these people did not form a consistent purchasing habit on Pinduoduo – i.e. the proportion of its GMV contributed by first- and second-tier cities users likely decreased as of September 30, 2019, as compared to the 48% level by June 30, 2019. 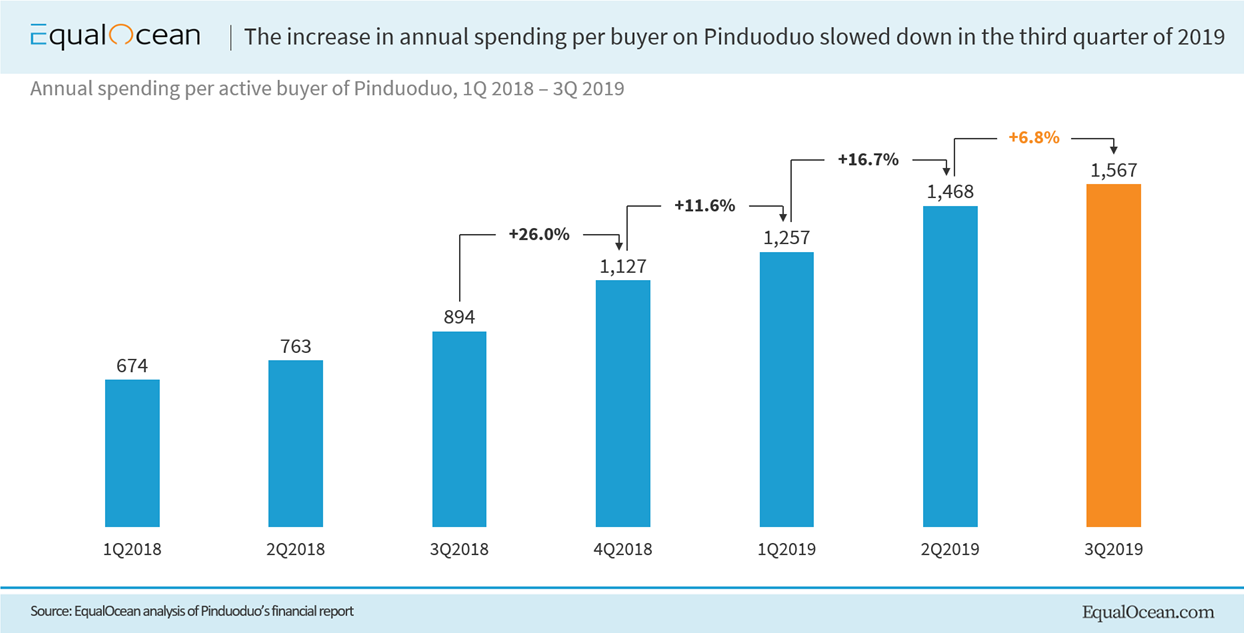 2. Annual Spending per Active Buyer on the platform in the twelve-month period ending September 30, 2019, was RMB 1566.7 (USD 219.2), an increase of 75% from that of the same period last year, which is significantly lower than its year-on-year revenue growth rate of 123%. This figure, together with the downward trend in terms of quarterly GMV/active buyers, suggests the increase in per-customer spending is actually not that optimistic, and the new users, on average, tend to purchase low-value items that Pinduoduo specializes in rather than the heavily subsidized3C products that carry a higher ASP.

In either of these cases, the reality seems to deviate somewhat from what the company would like to achieve with its current strategies, at least for now. Therefore, this has resulted in revenue of RMB 7.5 billion and a net loss of RMB 2.3 billion both came below projections.

Momentum decelerated halfway through this game of catch-up

Though Pinduoduo is catching up with Alibaba in terms of the number of annual active buyers – with 536.3 million customers in the last twelve-month period ending September 30, 2019, representing 77% of Alibaba’s 693 million figure – the two platforms still have wide disparity regarding the ability to generate profits.

It is truly unfair to compute the level of net income between an emerging business and its very mature counterparts; however, it is somewhat reasonable that we take a look at their revenue growth rate.

Even if revenue from the core commerce of Alibaba (excluding its cloud computing, digital media, and innovation initiatives businesses) has reached RMB 101.2 billion (USD 14.2 billion) in the third quarter of 2019, China’s top Internet giant is still keeping 40% year-on-year growth in this segment.

Pinduoduo, on the other hand, shows quarterly revenue that only accounts for 6% of Alibaba’s scale, and its year-on-year growth rate has already slowed down from 169% in the second quarter of 2019 to 123% in the third quarter of the same year. In this case, no matter how we compare this result on a cross-sectional or time-series basis, this is not good news for the rising e-commerce player.

On the path to becoming one of the top players, Pinduoduo has consistently surpassed JD in terms of MAUs and is also competitive with them in terms of GMV and market capitalization.

Each of the aforementioned three metrics (MAUs, GMV, and market cap), especially the latter two, are key measurements of any e-commerce company. GMV indicates the scale of the retail platform. Market capitalization directly measures the size of any public firms.

As a result, investors had a tendency to be overly optimistic about Pinduoduo's future, as evident in its 26.9% stock surge this past October.

With considerably higher MAUs and growth rates than those of JD’s, the continuous increase in Pinduoduo’s stock price reflects the overall market view that this giant can soon surpass China's second-largest e-commerce company.

However, on November 15th, JD released its third-quarter results showing strong figures. According to the firm, net revenue for this past quarter was RMB 134.8 billion (USD 118.9 billion), an increase of 28.7% from Q3 2018, the highest growth rate in the last five quarters. These figures significantly surpassed the average projection of RMB 128.4 billion.

Most importantly, its non-GAAP net income that is attributable to ordinary shareholders increased by 160.6% from RMB 1.18 billion in Q3 2018 to RMB 3.09 billion (USD 431.7 million) in Q3 2019. This ability to generate profit is ultimately what secondary-market investors care the most about.

Therefore, since Pinduoduo's third-quarter financial results looked lackluster compared to JD’s, its share price suffered as a consequence despite beating their Q3 estimates. Pinduoduo failed to meet the market’s expectation that it will outperform JD to become the second-largest player. Even if Pinduoduo hit the estimates, its share price would also have fallen, albeit less. However, since it failed in beating estimates and its Q3 results were outmatched by JD’s, so its share price witnessed a tremendous decrease.

However, this does not mean that Pinduoduo is not a company to keep an eye in the long-term for investors because their Q3 financial results also reveal positive indicators, allowing us to observe their future potential.

In part 3 of this series, ‘An optimistic outlook’, we explore the company’s possible strategic moves and future prospects.