Looking into the country’s venture investment landscape in the field of connectivity. 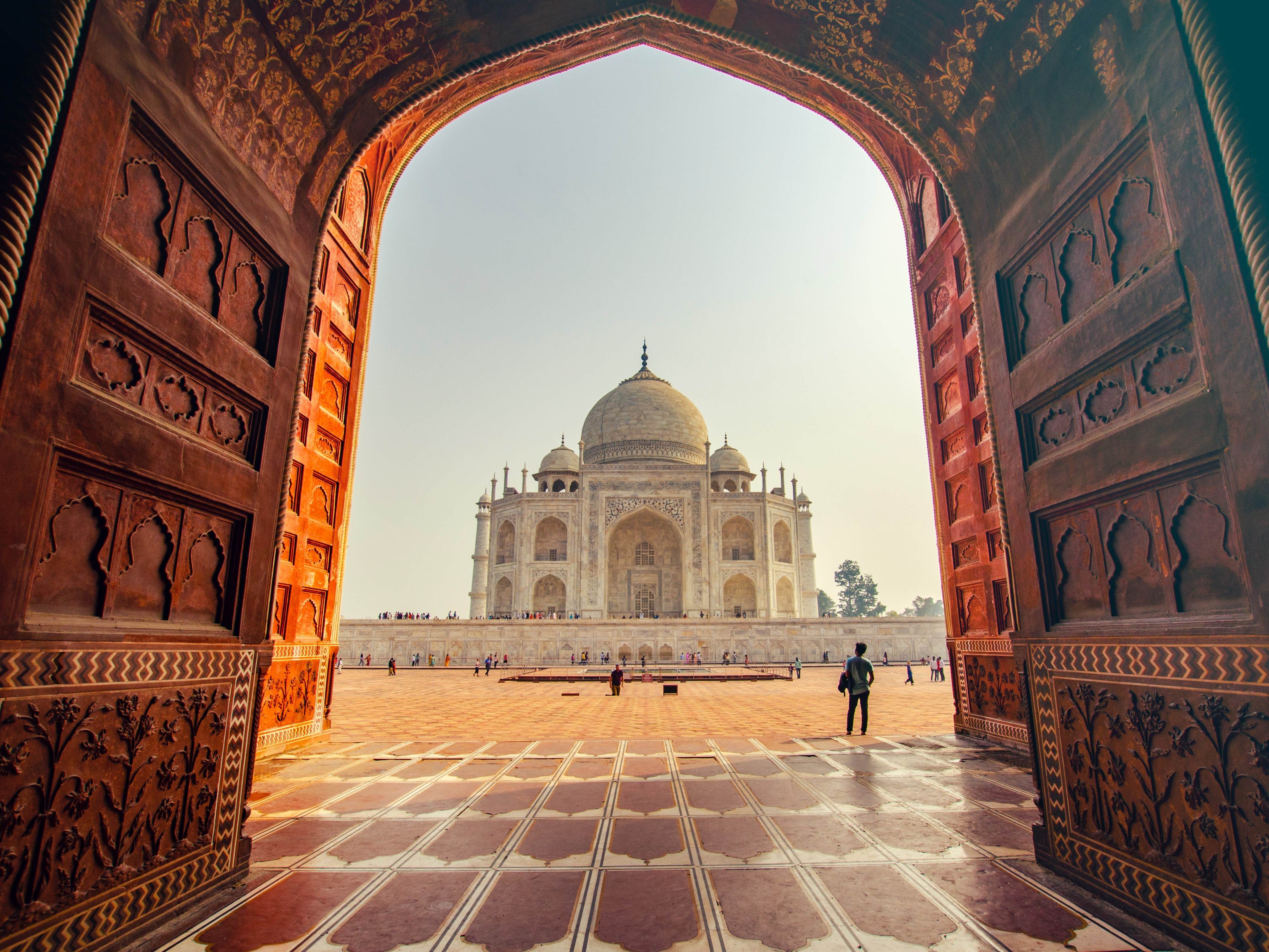 In tech circles, India is well known for its budding fintech and e-commerce sectors – which is logical, if we take into consideration the country’s ample consumer market and ever-growing real disposable income. Aggressive upstarts like Lenskart, PolicyBazaar, Flipkart and Udaan have been carrying out gigantic financing rounds in rapid sequence over the past few years. One example is Lenskart’s USD 275 million Series G that was led by SoftBank’s Vision Fund in December 2019.

Nonetheless, other industries in the overpopulated state also have their own growth-stage gems – one-of-a-kind private companies challenging incumbents across various verticals. Most of them are betting big on selected cutting-edge technologies that are widely projected to shortly reshape the way people live, work, communicate and run businesses. The Internet of Things (IoT) is one such concept. And, as you can probably tell by now, this article summarizes PE/VC investment trends in this area. This time, India is in the scope. (Check out our take on Israel and its capital.)

While, according to some sources, the number of IoT startups in the country has already hit quadruple digits, disclosed information about private equity funding events is quite scarce. Online business data aggregator Crunchbase contains reports on roughly 150 rounds of financing closed by Indian enterprises that are operating (or claim to be operating) in the domain of IoT as of January 2020.

The most significant of them – Stellapps’ Series B – brought the Bangalore-based agtech prodigy USD 14 million. That was a remarkable event as some world-famous household names, like the Bill & Melinda Gates Foundation and Qualcomm Ventures, were joined in the venture by a cadre of local money-managing juggernauts like Blume Ventures. Aside from that, Atomberg Technologies, a Mumbai company that makes energy-efficient fans (extremely vital devices in soggy India), bagged USD 10 million from several local investors last September. 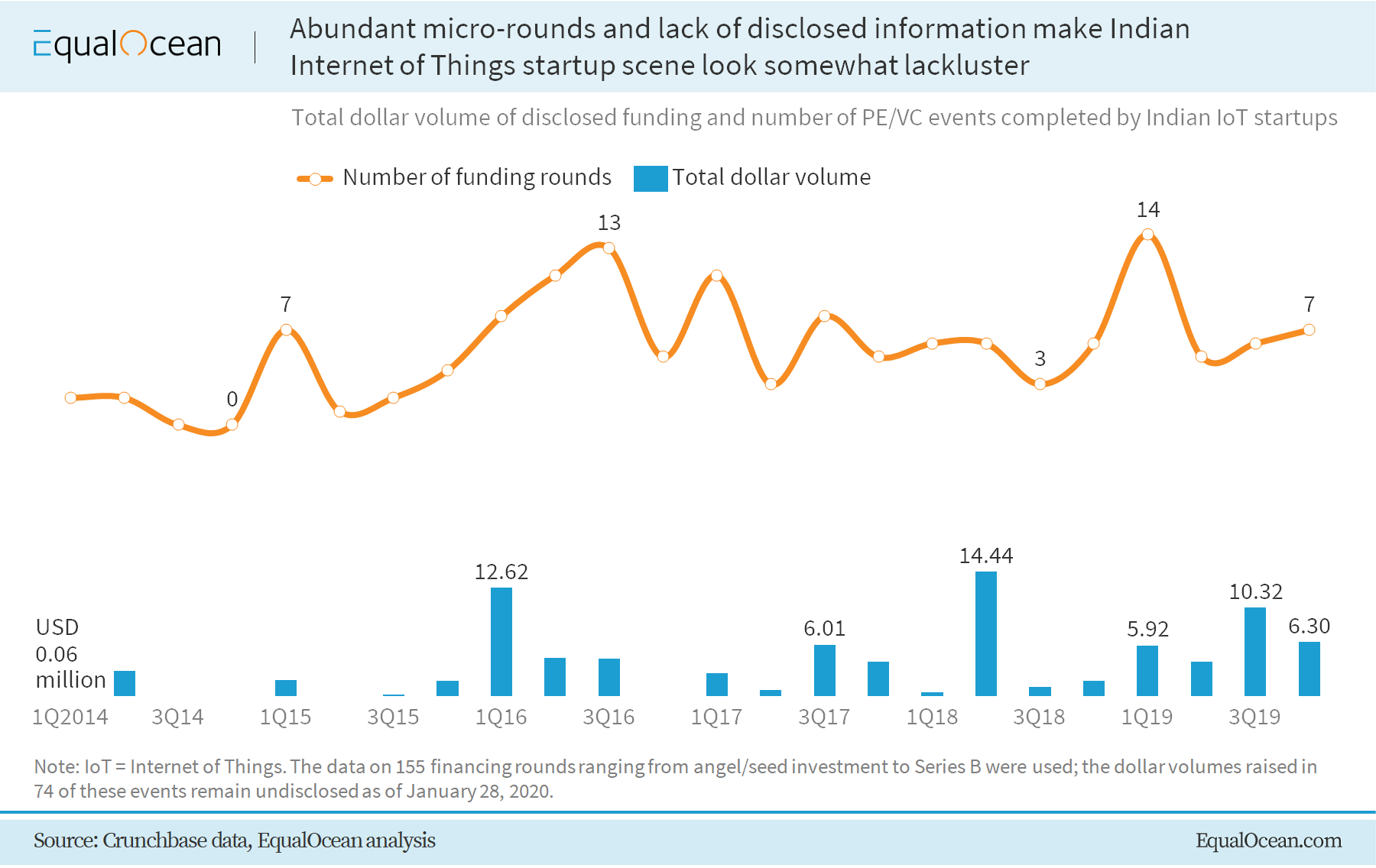 Indeed, all this looks minuscule, compared to what has recently been happening in the three tech powerhouses that are the United States, Europe and China. However, we have seen some positive shifts in the field over the last two years. More significant funding rounds, new companies and top-notch local investors have become involved.

As for the latter, Singaporean firm Jungle Ventures, Hong Kong-based Mount Parker Ventures and a handful of the US representatives, including K2 Capital Group and Unitus Ventures, have lately taken part in at least one round each. Many more private equity organizations are keeping an eye on the Indian market.

Besides the small number of investment events and their relative insignificance, another important issue indicates that the IoT area in India is rather nascent: over 84% of the funding rounds are either seed or angel investments, with a few Series A and B. There are simply no late-stage IoT startups in India to date, according to Crunchbase. 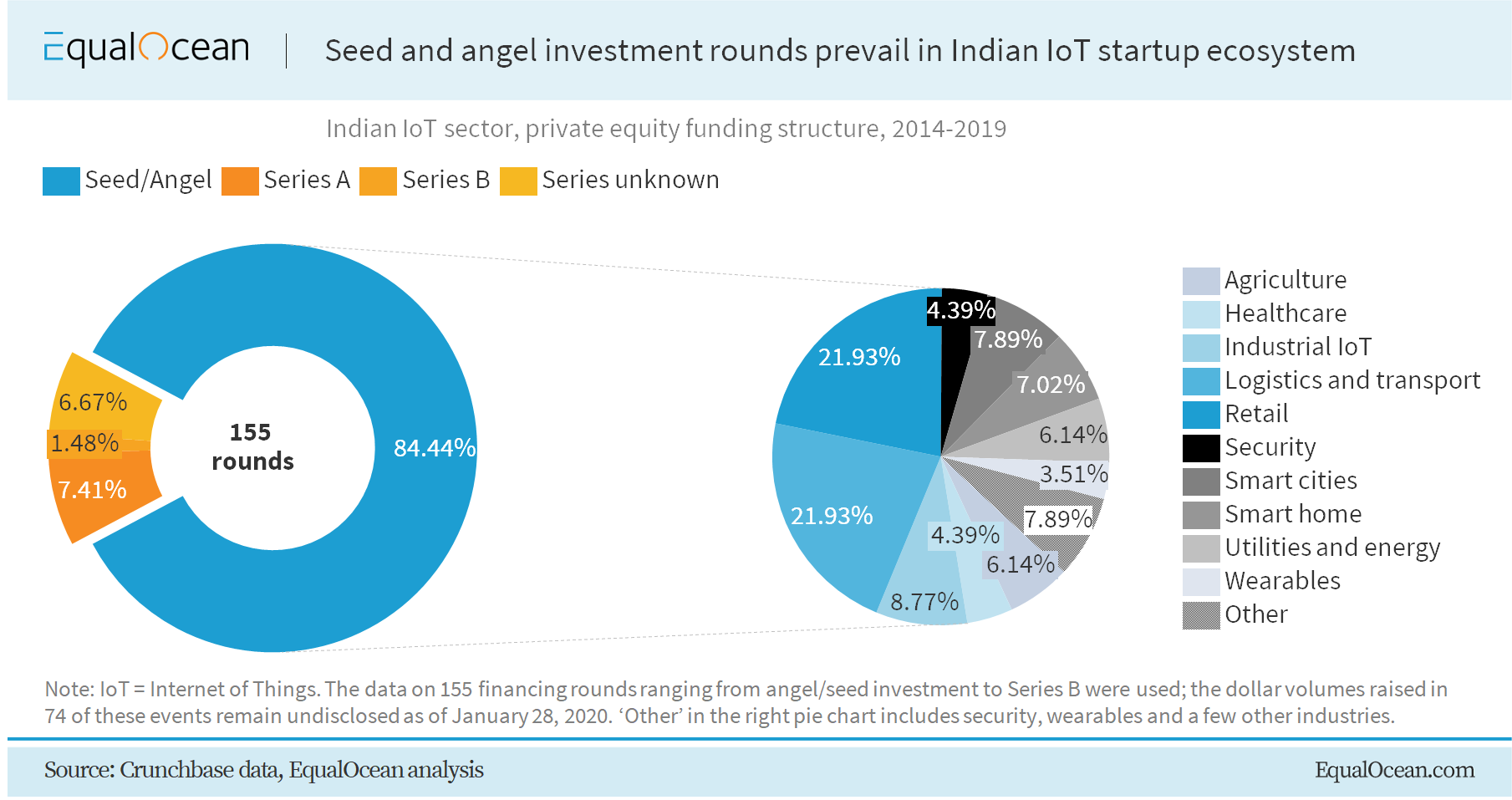 In the meantime, retail, logistics/transport and the Industrial IoT (IIoT) top the list with the most venture transactions. Combined, the three account for over half of the countrywide number. And the reasons for this type of dominance are on the surface:

Nearly 1.4 billion people is what speaks for the market depth. With a growing real disposable income (it has roughly doubled over the past six years), more households are joining the golden category of the middle class, not only becoming the main target for producers of consumer staples but also making it into the pool of potential car-buyers and luxury goods purchasers. Consequently, retail is something of importance in India.

And it is tightly related to logistics. Physically moving goods, resources and other forms of capital is essential when the scale is this big. The same must be said about people – both in terms of labor and spheres like tourism. Frequent travelers in India know that both intracity and intercity means of travel leave much to be desired: crowded megapolises and deteriorating infrastructure impose great challenges on the government. This hurdle is nothing new.

Facing continuously increasing industrial output stirred by transnational corporations that, seeking low-cost labor, have been moving their plants out from richer-than-ever China, India may be about to become the next ‘world’s factory.’

Revolutionary processes in manufacturing, such as automation and digitalization, are crucial to maintaining buoyancy, as almost every Asian country would love to join the battle for the opportunity to have a few more subsidiaries of S&P 500 companies. IIoT thereby is a decent competitive lever. Quite naturally, the Indian startup ecosystem is trimming its sails to the wind.

A Tale of N Cities

The southern city of Bangalore, known as the Indian Silicon Valley, has been on everyone’s lips since on-demand food delivery platform Swiggy raised one billion dollars in its 2018’ Series H (however, most of the industry veterans knew about the up-and-coming startup mycelium long before it mushroomed). Now, India has more than that, and the IoT area is one of the examples that demonstrate how geographically diverse the world’s second most populated country’s startup scene is. 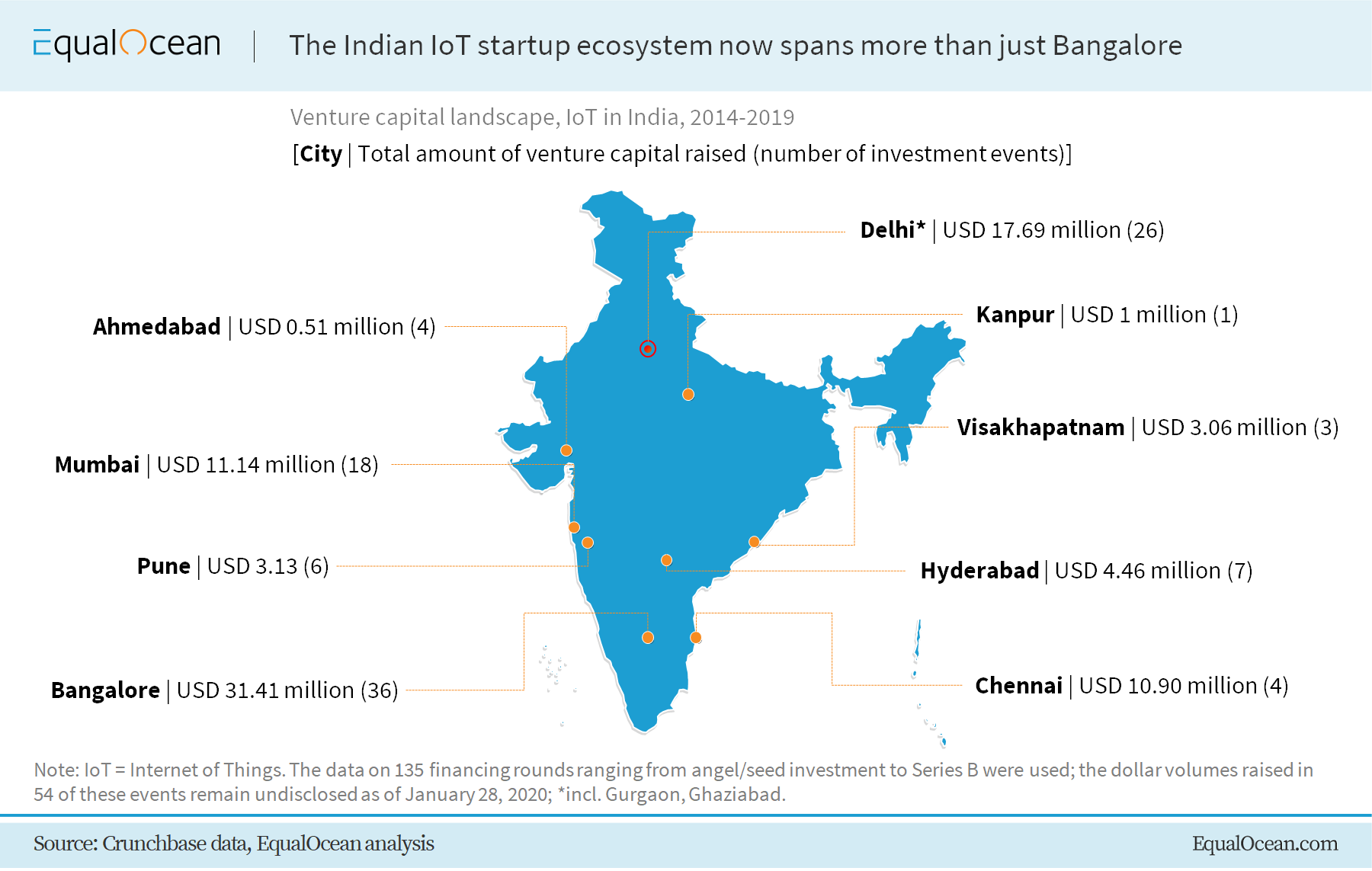 PE/VC activity is scattered all across India. The data show that the National Capital Region (NCR) is as important as Bangalore: New Delhi, accompanied by a cluster of satellites, including Gurgaon (one of Delhi’s closest neighbors that is dubbed ‘Dubai of India’) Faridabad and Ghaziabad, to name a few, is comparable to the southern city.

But can it carry away the garland shortly? According to our dataset, 34.38% of 2019’s funding rounds took place in Bangalore, while the NCR’s share was only a modest 6.25%. A ‘shift of power’ doesn’t seem to be possible in the short term.

Other challengers are Hyderabad, Mumbai, Pune and Chennai. All of these cities have seen a significant amount of investments in growth-stage IoT companies since 2014, having considerable numbers of newly established enterprises.

EqualOcean has compiled a list of 20 early-stage Indian IoT upstarts with significant growth potential and exceptional business models, using a handful of investment and technology-related variables. The final list of ‘laureates’ spans eight distinct areas, including incumbent industries like logistics and transport, as well as evolving concepts like smart home and IIoT. 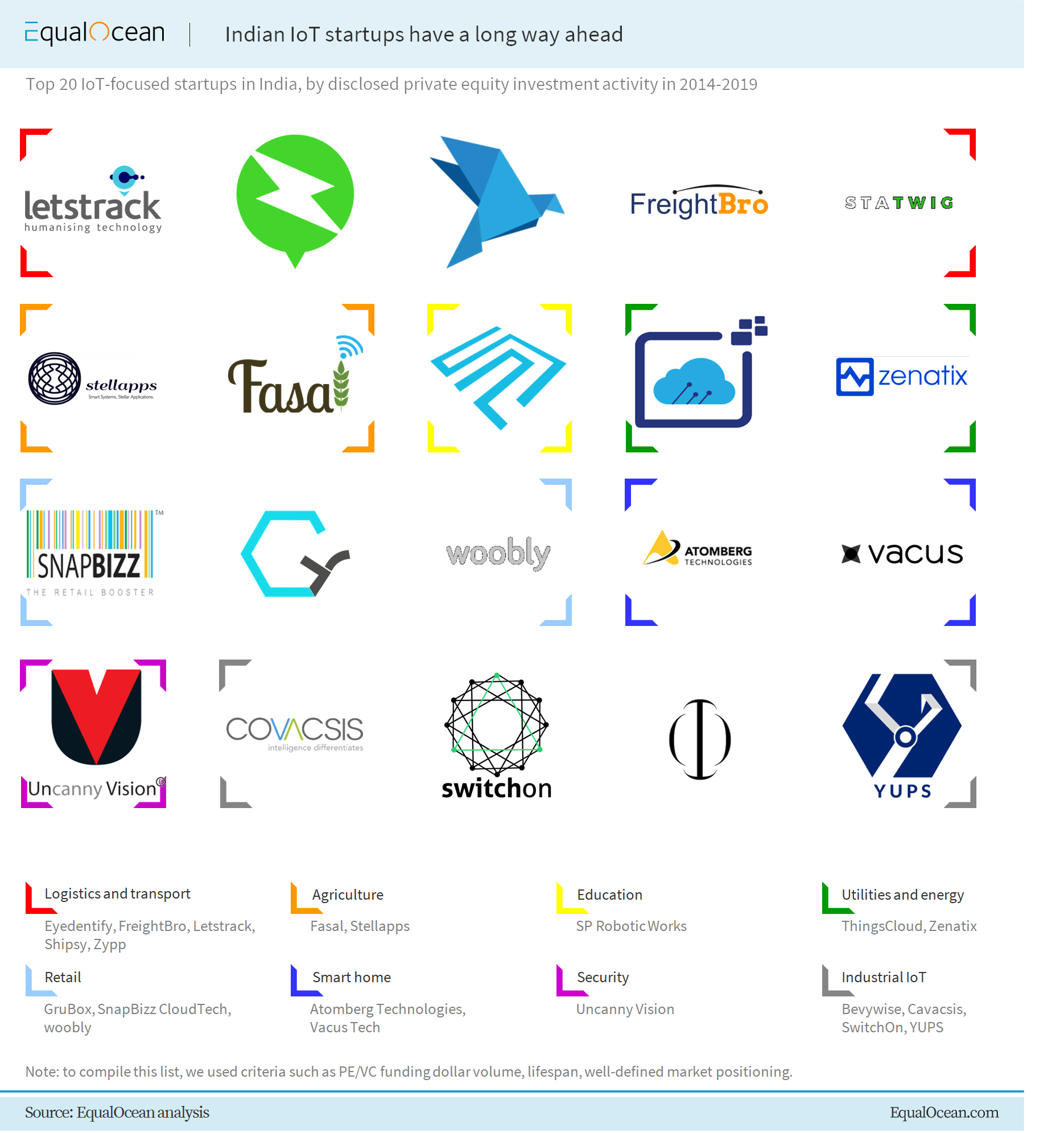