Jiangsu province in China has a bright future, with more biotech and pharma companies choosing the region to develop their businesses; thus far, the area is one of the largest biotech hubs in China. 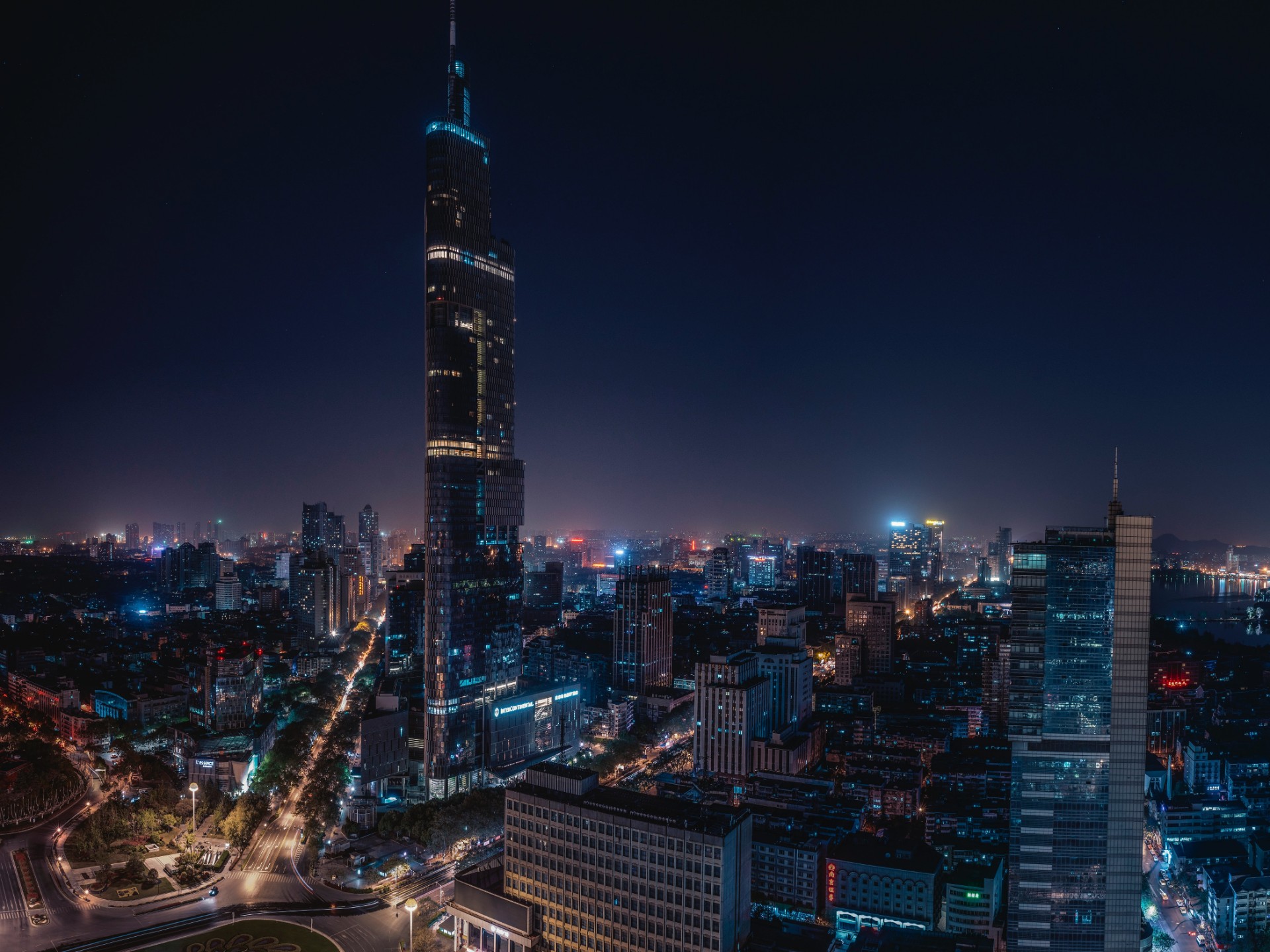 The life sciences industry continues to have a robust expansion with global governments making a progressive effort to create new value and breakthroughs, with the primary purpose being guaranteeing the health of populations.

According to the Deloitte 2020 life sciences outlook, gene therapies, intelligent drug discovery and development, consumer wearables and telemedicine will be the main drives of the life sciences industry. Between 2018 to 2024, the global pharmaceutical drug sales are expected to have a steady growth with 6.4% CAGR, and pharmaceutical sales in China are expected to see a CAGR of 8.7%. In this progressive dynamic context for the healthcare industry, we will briefly dig into the life sciences industry in Jiangsu province, where the vitality of the industry is at its strongest in China.

In the two past decades, China has made significant progress in the life science industry, which has contributed to greater access to medical products and smoothed the development of the country's healthcare system. Numerous life sciences companies appeared in recent years, with pharmaceutical and biotech companies reaching lofty innovation goals and gaining international approvals on new drugs.

Jiangsu, an eastern-central coastal province in the north of Shanghai, has defied all the odds and today is leading in both biopharmaceutical and medical devices. The province has established many life sciences parks in recent years. For instance, last year, Wuxi city was congratulated with a new project – The Wuxi International Life Science Innovation Campus – aiming to bring together national and international companies with shared resources, including laboratories, equipment and services.

The Wuxi life sciences park is a cooperation between the regional government and biopharmaceutical giant AstraZeneca, with the latter being a founding partner. The park is expected to shelter more than 30 startups in the coming years. Besides, global healthcare companies have established their businesses in the park, including Japan-based electronics firm Omron, Russian multinational biopharma firm Semantic Hub and UK -based data storage service provider ClearSky. 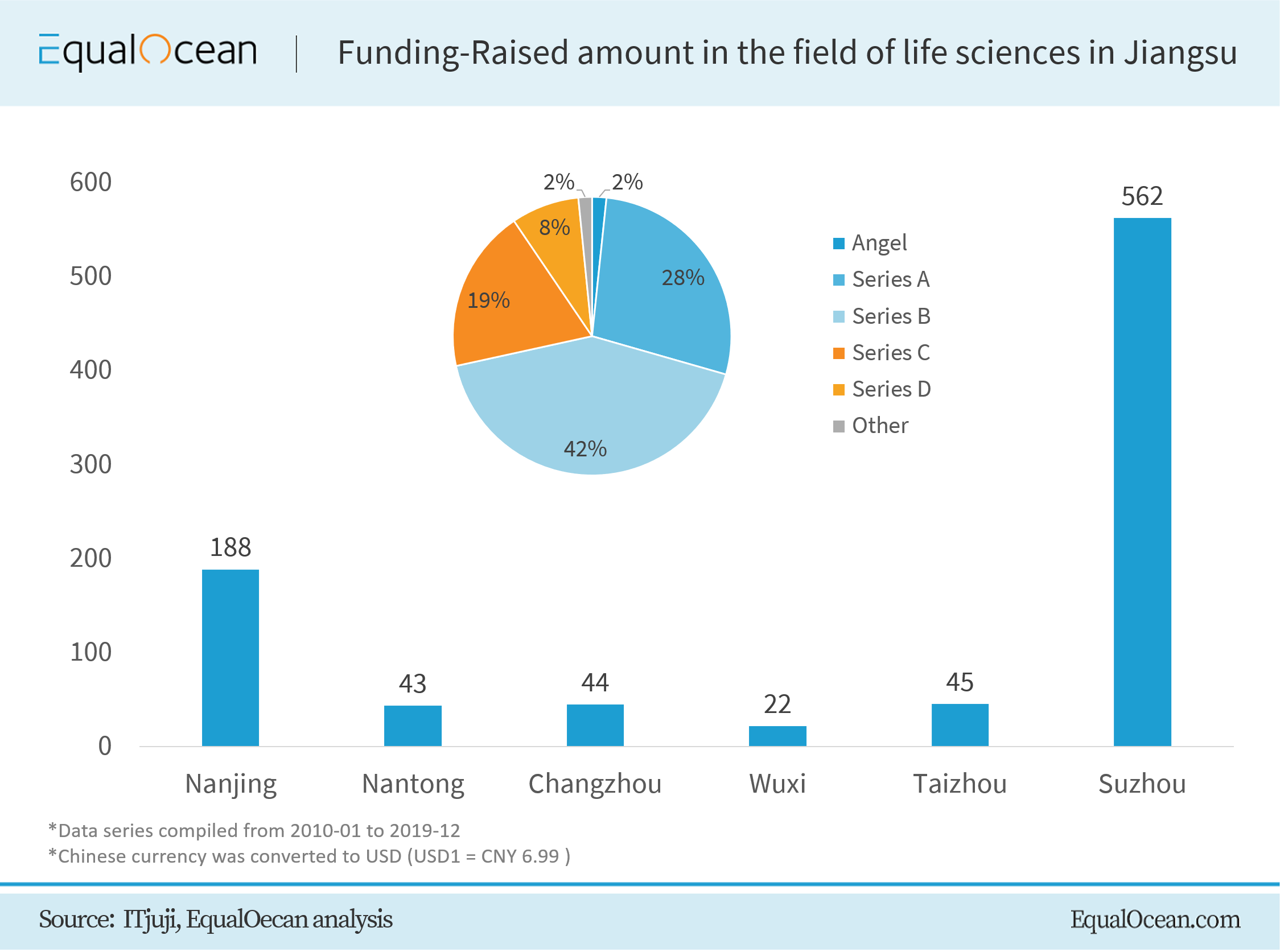 However, startups in the city of Suzhou also recently raised an enormous amount of investment. From 2010 to 2019, biotech firms based in Suzhou received USD 562 million in funding, representing 62% of total venture capital in Jiangsu. For instance, Suzhou-based biopharma firm Tot Biopharma (东曜药业) raised over USD 110 million before it went public on the Hong Kong Stock Exchange last year under the sticker ‘1875.’ On the day of the IPO, the company stock opened at HKD 6.55 and snagged USD 75.2 million.

The life sciences parks in Jiangsu province are expected to secure the areas status as the largest biotech hub in the central coast of China. The region is becoming a competitor to its neighbor Shanghai. The latter city, the financial center of China, where hundreds of millions of yuan are traded every day in the Shanghai Stock Exchange market, is home to country's largest life science parks, particularly a Kendall Square-like biotech hub, Pharma Valley. The valley is situated in one of the remarkable technology parks in Shanghai's Pudong district, the Zhangjiang High-Tech Park (张江高科技园区). And it has developed into the epicenter of the country's biotech industry.

The valley is home of more than 500 biotech and pharma companies, among them I-Mab Biopharma (天境生物). The Chinese Immuno-Oncology firm landed its IPO in Nasdaq at the beginning of this year and raised USD 104 million by issuing 7.4 million American Depository Shares (ADS) priced at USD 14. Before IPO, I-Mab managed to raise a total of over USD 350 million in funding.

The top 20 companies in Jiangsu's life science scene raised a combined amount of over USD 726 million from 2010 to 2019, with a focus on high fields like biologicals, therapeutics, diagnostics, and bioscience. 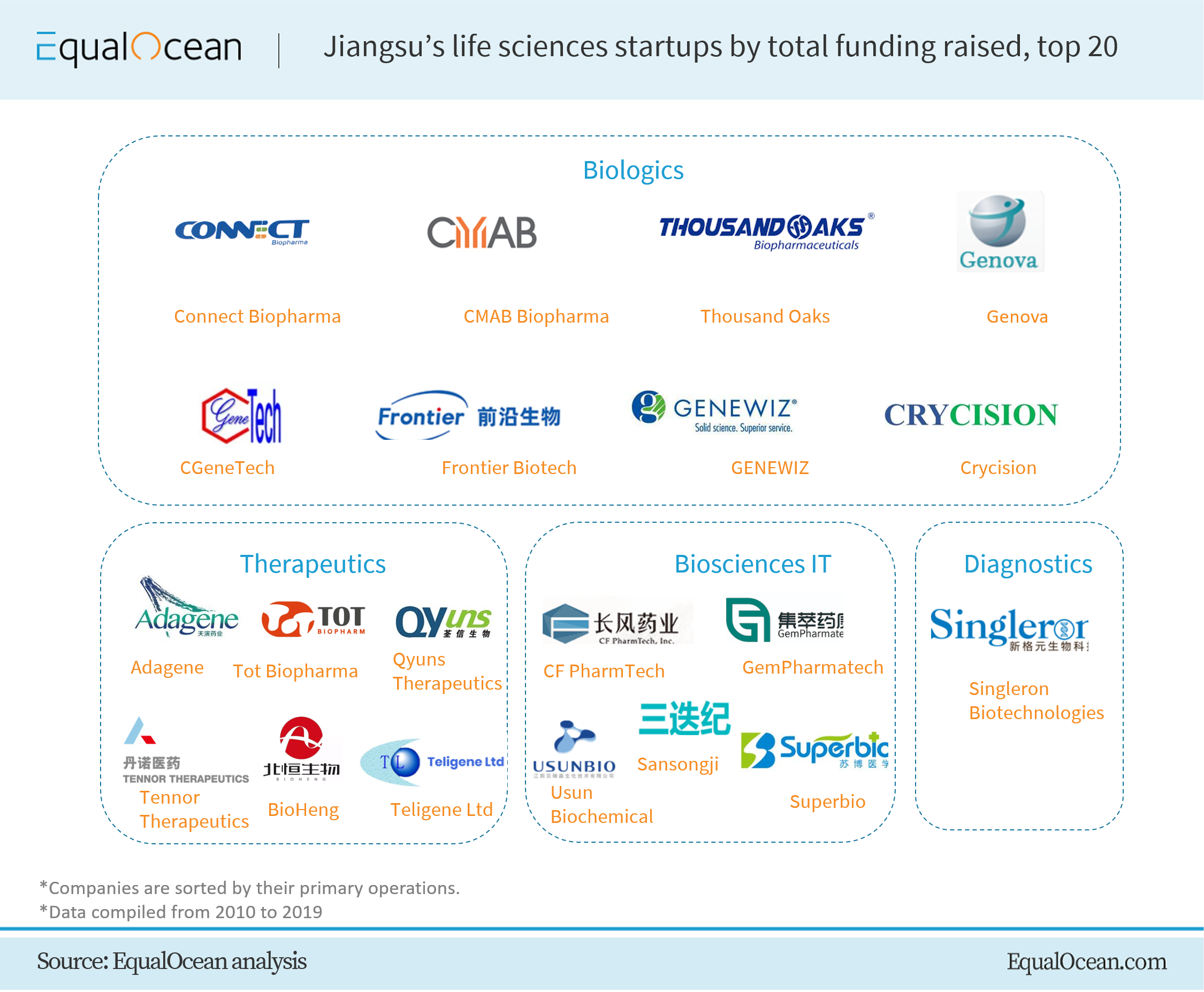 Biological therapeutics have led the primary market funding activities in the mainland, with an emphasis on targeting yet-to-be-cured diseases with newer techniques and the country's chronic problems with affordable solutions.  When compared to developed countries like the United States, China still lags in the use of deep-learning-based technologies in the field of life sciences due to the immature novel-drug industry. But the wind has been changing direction in the last couple of years.

Investors seem to be more optimistic when the government looks to be taking the necessary measures to lead the country in the global biotech industry. And past events have proven that almost nothing is impossible for Chinese leaders, and investors will probably enjoy the hoped-for bright future, as the market is in continuous and fierce transformation. Hundreds of millions in capital are injected every single day, enlarging the life sciences market even further.