Scrutinizing one of the country’s top chipmakers reveals... 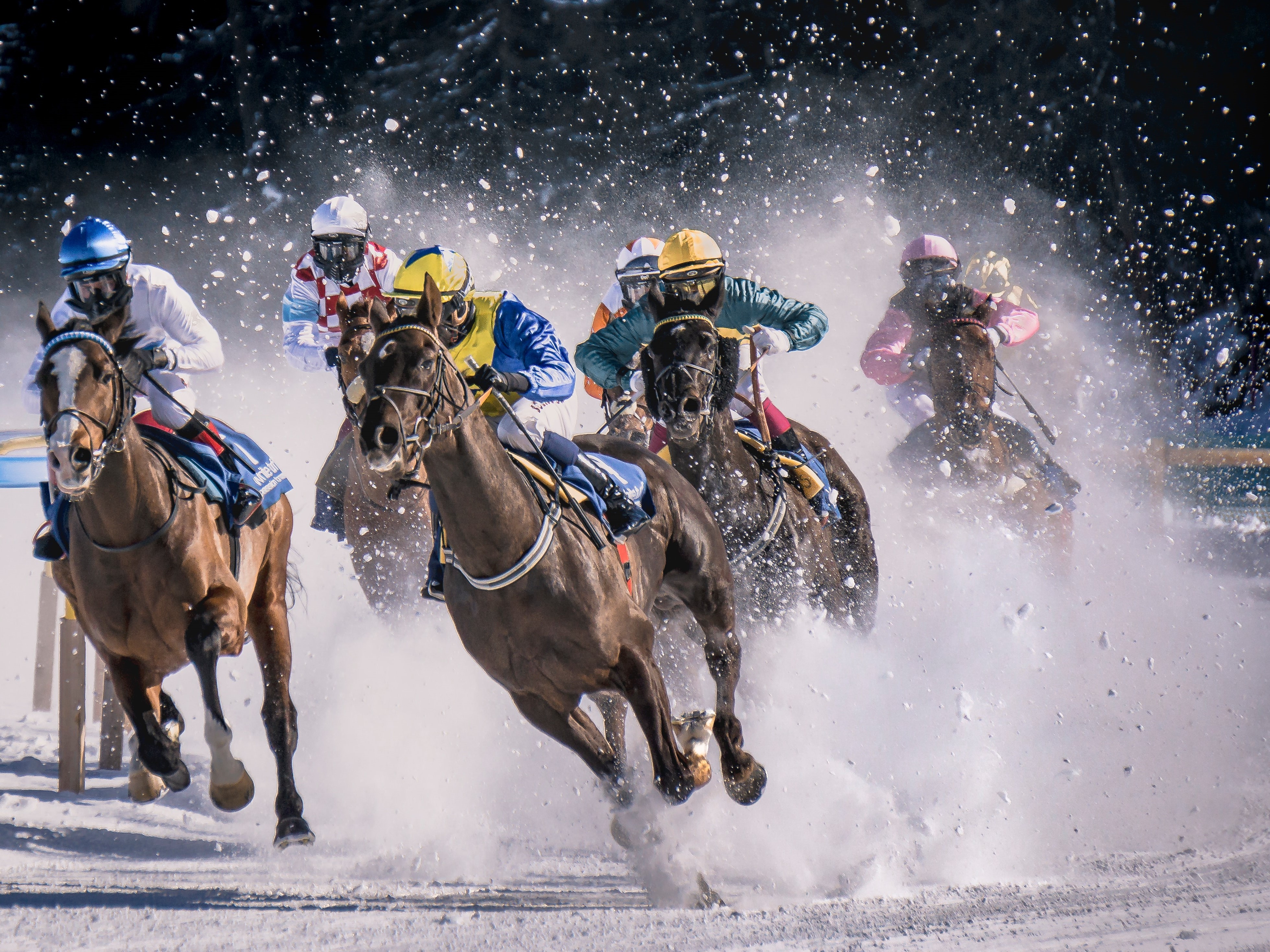 Resulting from the new wave of countrywide development in this high-tech sector, a number of players representing the previous generation of microelectronic blacksmiths have emerged to become significant within their chosen verticals on a global scale. Many stocks have rallied, boosting both the market caps and investors’ confidence.

For those who hadn’t gone public before the government set its sight on the accelerated modernization, new channels to capital have been established in recent years. One of these projects, the Shanghai bourse-based sci-tech board, known as the Star Market, has seen a handful of semiconductor companies applying for listings since the platform launched trading in July 2019. (Check out our latest comprehensive quarterly overview of the new marketplace.)

Memory interface chip producer Montage Technology was among the first batch of those pioneers. The firm’s stock has been performing solidly. The market cap surpassed CNY 80 billion (USD 11.4 billion) at the end of last year. In 2020, the uptrend resumed, and the shares soared to new heights. It punched a CNY 130 billion (USD 18.5 billion) bar shortly after the Lunar New Year, which was hobbled by the coronavirus epidemic.

As a result, Montage, once again, became the largest company listed on the Star Market, and this is the very reason for the analysis below.

Registered in the world’s top tax haven, the British Virgin Islands, in March 2004, Montage Group first set its sight on the emerging home entertainment market in China, providing the country’s TV makers with analog and mixed-signal chips. In April 2006, the firm changed its place of incorporation to the Cayman Islands, another territory with no corporate tax on money earned abroad. Nonetheless, the group has always been de facto headquartered in Shanghai. 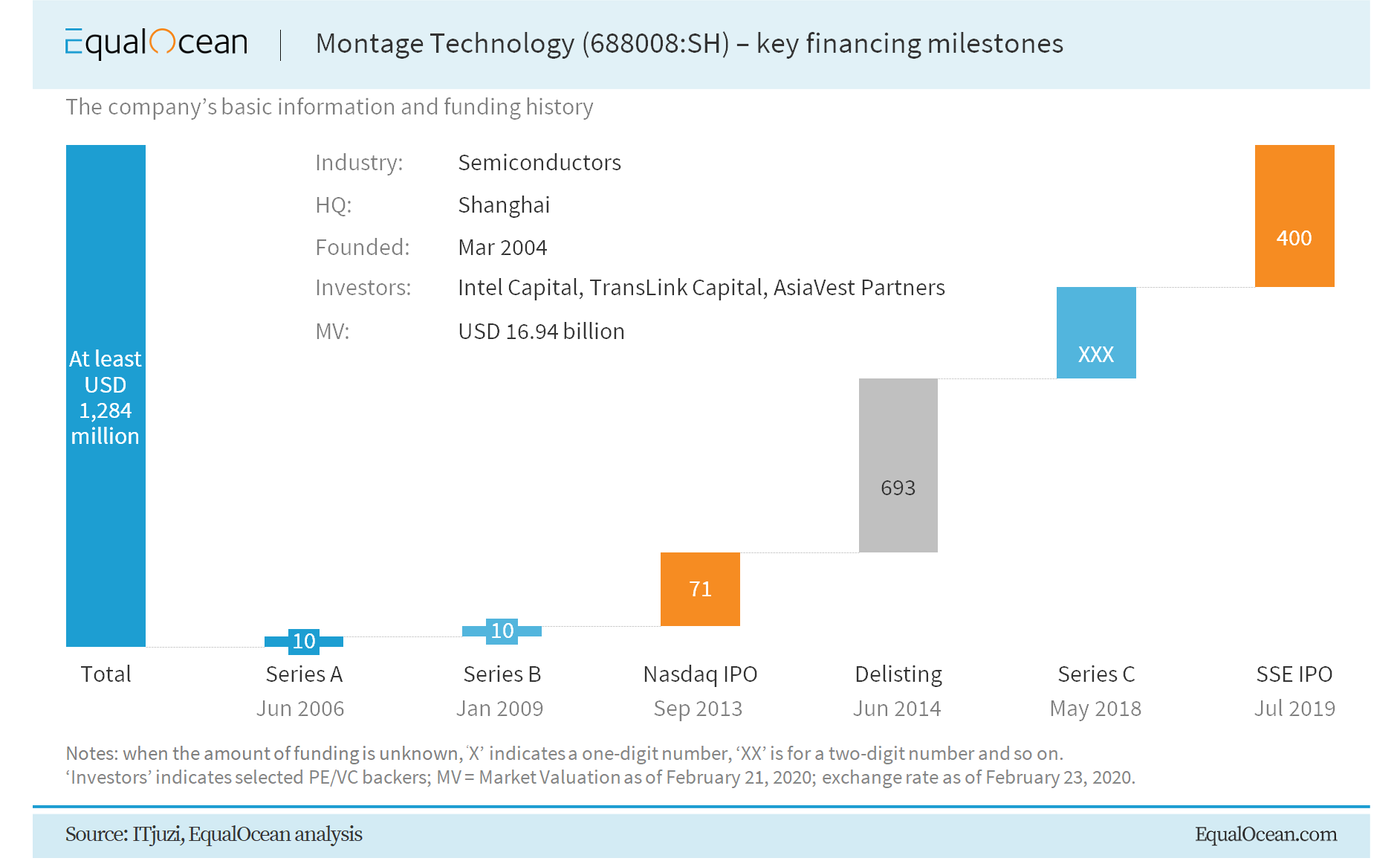 In the ‘private’ stage of its development, the chipmaker was funded at least twice. A few months after the tax residency was changed for the first time in 2006, Intel’s investment arm and Taiwanese venture capital firm, AsiaVest Partners, injected USD 10 million into the budding company. Two and a half years later, the second round – a Series B – brought Montage another ten million.

In the late noughties, the home entertainment market was on the turn, with a shrinking room for the TV segment expansion. Montage’s original niche then started to lose its attractiveness, as handier, portable mass products, such as laptops and smartphones, were conquering the world. That was the time of the second handset revolution: touch-screen gadgets commandeered the lion’s share of the global market from push-button devices in a blink. It was evident that the chipmaker’s product mix was at high risk of becoming obsolete.

Montage chose a sure way to diversify its business. Back in that time, China’s memory chip sector was in an infant stage. At the same time, the country, leveraging its low-cost labor, had already seized the largest downstream area of the semiconductor industry –  consumer electronics. The intentions of localizing the supply chain and looming plans for technological self-reliance became essential triggers for jumping into one of the bigger subsectors of the complex field of microelectronics.

And the young company snatched the chance. In June 2008, Montage registered its first memory product – Advanced Memory Buffer (AMB) – a fundamental element of a Double Data Rate 2 (DDR2) Random Access Memory (RAM) chip. Since then, the firm has made its contribution to each of the following generations of DDR RAM. More specifically, it has developed registers and buffers for DDR3 (rolled out in August 2011), Registering Clock Drivers (RCD) as well as data buffers for DDR4. 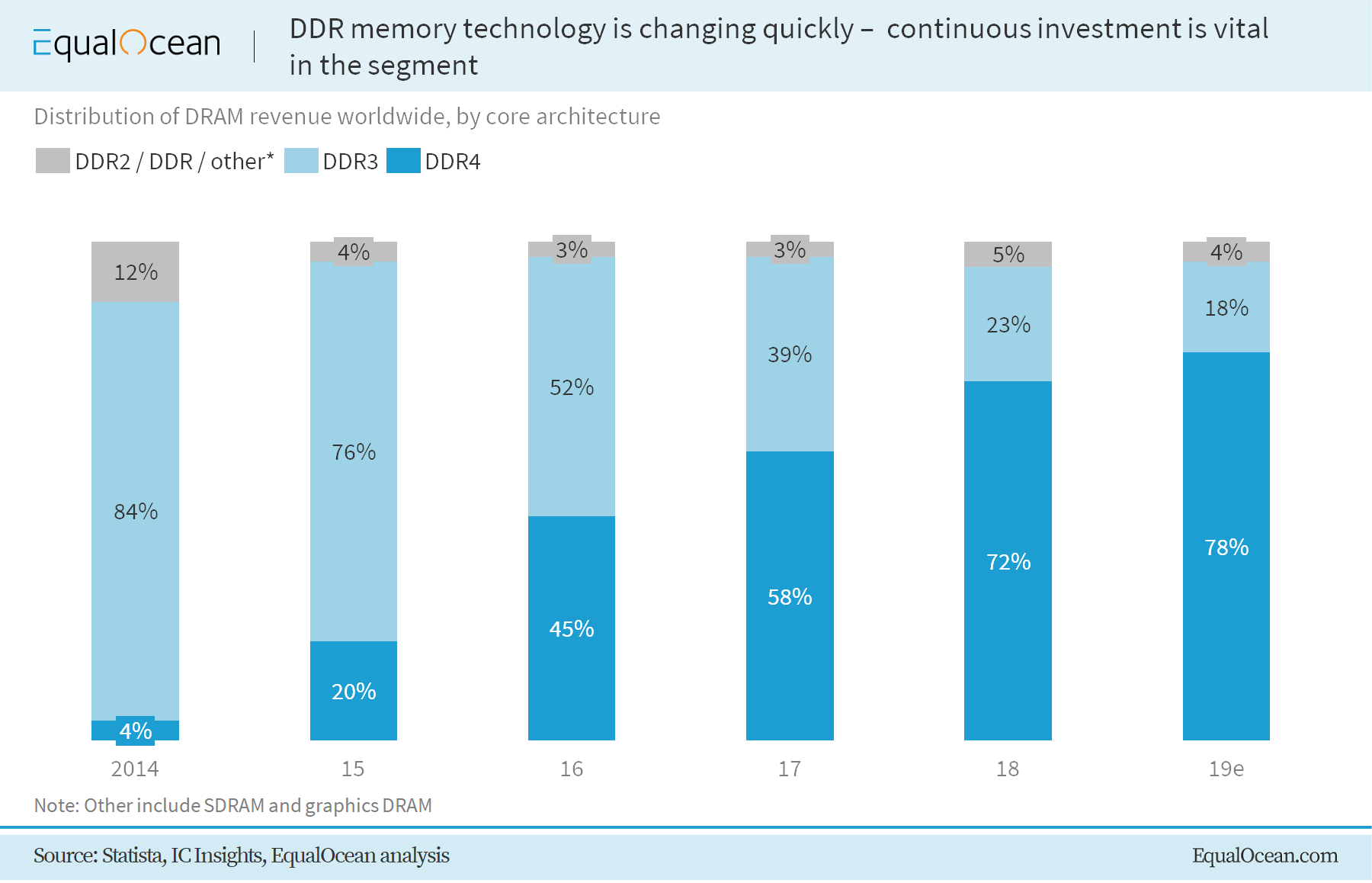 This shift, in league with the commercial success of the new products, had an enormous impact on Montage’s initial public offering on Nasdaq in 2013. In the prospectus filed with the United States Securities and Exchange Commission (SEC), the firm stated that it “released memory interface solutions to pursue opportunities arising from the rapid growth in the cloud computing market,” hereby indicating the future priority, putting aside TV chipsets, its traditional business.

On September 26, 2013, Montage kicked off trading in the American tech venue under the ticker ‘MONT,’ selling 7.1 million shares at USD 10 apiece. Its overseas adventure didn’t last long: five months down the road, asset manager Shanghai Pudong Science & Technology Investment initiated preliminary talks over possible privatization of the company. The dialogue ended up as a USD 693 million deal that happened shortly after the fabless chipmaker was delisted due to noncompliance with Nasdaq listing rules.

Nearly four years after the firm was taken private, it reactivated fund-raising. A massive Series C, which saw participation from at least 16 investors, including CITIC Securities (6030:HKEX), Everest Venture Capital and China Electronics Corporation (CEC), brought Montage hundreds of millions of dollars in May 2018.

An important factor here is that the Shanghai-based memory chip developer – again, one of the biggest in the country – doesn’t have the China Integrated Circuit Industry Investment Fund, or simply ‘Big Fund,’ among its backers. The fund is a multibillion-dollar state-backed project designed to bolster China’s dawning semiconductor ecosystem. It was established in 2014 and thenceforth has pumped capital into dozens of local up-and-coming chipmakers. For instance, it invested in the mainland’s largest foundry SMIC (Semiconductor Manufacturing International Corporation, 0981:HKEX), the Star Market-listed Anji Technology (688019:SH) and Advanced Micro-Fabrication Equipment (AMEC, 688012:SH); the latter performed exceptionally well in late 2019.

Nonetheless, the fact that the Chinese government’s brainchild has not taken part in any of Montage’s funding events doesn’t necessarily speak for lack of strategic potential or economic insignificance. It might be quite the opposite, as state-managers usually tend to help either brand-new disruptors or old players that need constant support (SMIC is the case). Or, China can be flatly unwilling to bet on volatile memory – which is, however, unlikely, given, for instance, the story of the two-year-old ChangXin Memory Technologies (CXMT) that has recently been running at full blast in order to catch up with the global leaders (and even has some good interim results).

No matter the reason, the ex-Nasdaq-listed company eventually joined the country’s much-debated project – the aforementioned Star Market – and drew a (dashed) line under its financing chronicles.

Montage had a splendid 2019. The chipmaker made a way from CNY 24.80 to CNY 71.61 apiece on the overhyped platform, almost tripling its market valuation. And it is getting bigger in the new decade, reaching new highs.

Investors’ optimism doesn’t come from nowhere. Here, it can be explained by a gamut of aspects, including projected China’s semiconductor renaissance and the ‘board premium’ – an invisible value-added of the new trading venue. Still, the real-world financial performance is of primary importance. Montage’s numbers are stellar. 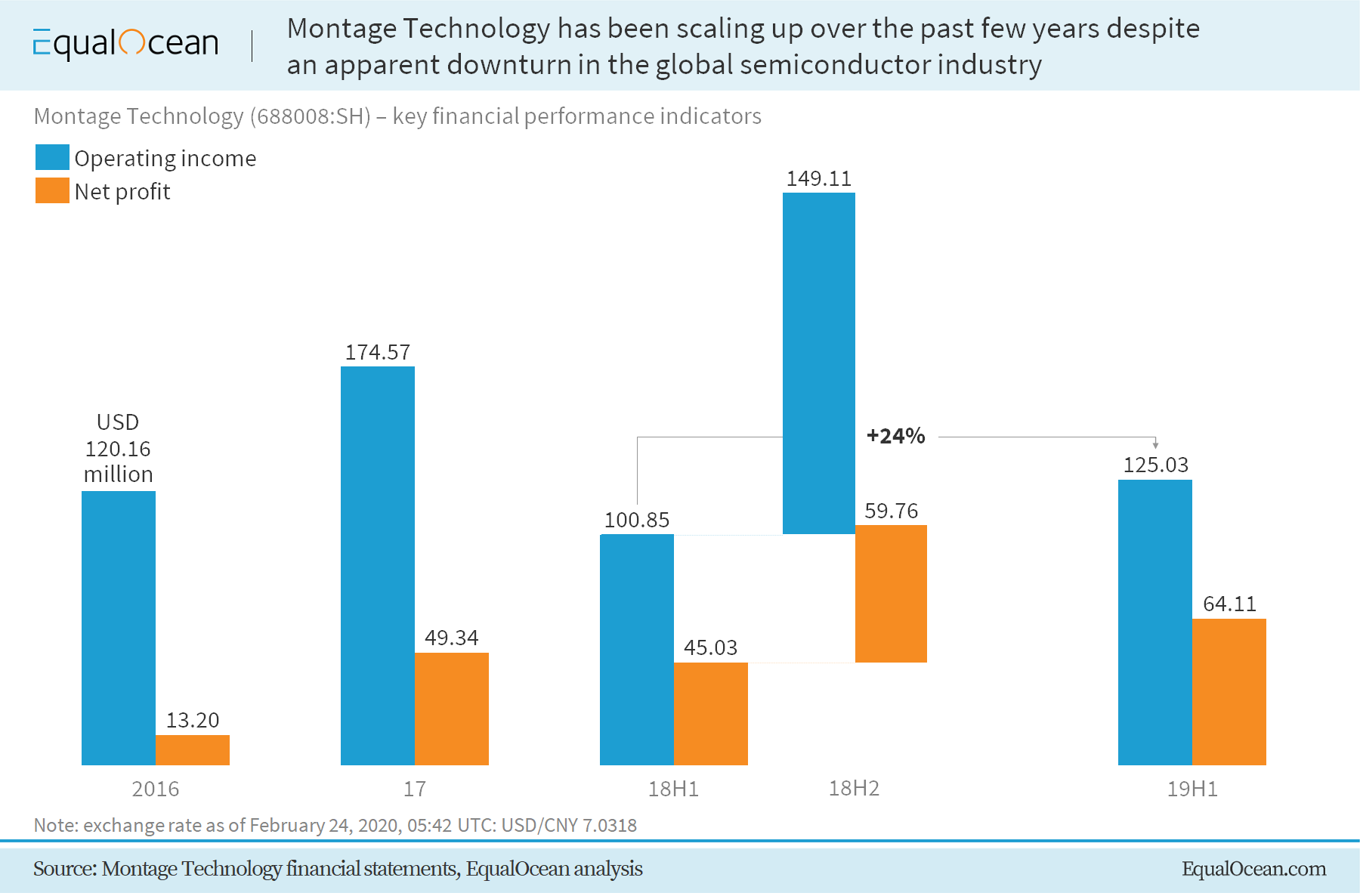 The global semiconductor market declined drastically in 2019. As for Montage, the company not only maintained buoyancy but also kept growing at a fast pace. The operating income in the first half of that year added extra quarter, compared to the same period of 2018, while its net profit grew by over 42%. Resulting from this, the net profit margin hopped over the 50% bar for the first time (it was even higher in the third quarter). These records are truly impressive if we consider that the stagnating sector is facing countless challenges here and there.

However, chip-to-chip interface technology behemoth Rambus (RMBS:NASDAQ), its closest rival, has been doing even better over the past three years: its gross margins were continually the highest in the market between 2016 and 2018. Both companies are playing in the field adjacent to what top-notch chipmakers like Micron (MU:NASDAQ), Samsung (005930:KR) and SK Hynix (000660:KR) call a priority.

The three, plus a handful of other major semiconductor corporations, are now working on the next generation of volatile memory chips with their sleeves rolled up. For one, South Korea’s Hynix is expected to start marketing its integrated circuits in late 2020 and has already disclosed some technical details. 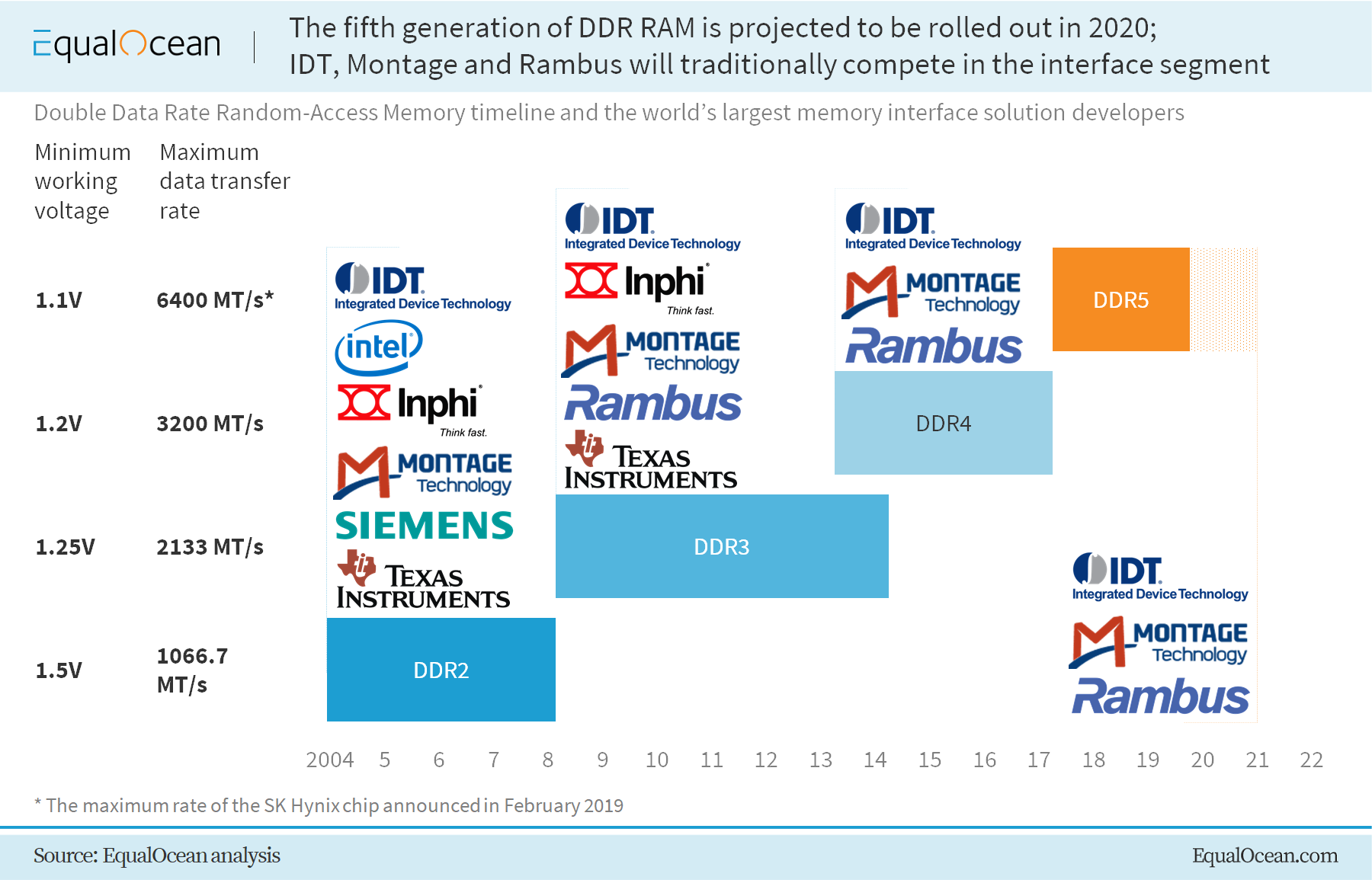 In order to outplay its direct competitors – San Jose-based IDT (acquired by Renesas in 2019) and Rambus – that were literally dwarfed by the Shanghai company’s Star board IPO in terms of market cap, Montage is boosting its spending on innovation drive. According to the most recent financial statement (in Chinese), its R&D cost in the three quarters of 2019 was CNY 196.94 million (USD 28.01 million), 18.21% higher than that of the same period in the previous year.

The past experience (yes, the TV chipset narrative) tells the company that maintaining a dominant position in just one niche often turns highways into cul-de-sacs. This is why it has recently been involved in several alternative projects. One example is its new server platform Central Processing Unit (CPU) for data centers that entered the mass production stage in 2018, after two years of cooperation with Intel and China’s top school and research center Tsinghua University.

Diversification is critical here. Markets always welcome each next generation of chips that is functionally better and cheaper than the previous one. While technological updates are rarely a problem, concerns abound when it comes to economics. Possessors of tight margins, memory giants are pressed by the ‘immortal’ Moore’s law that plays a crucial role in shaping the downstream clients’ expectations.

If DDR5 fails, Samsung, SK Hynix and others will, probably, invest less in DRAM. If DDR5 fails, there might be no Montage Technology in a flash.