EqualOcean on Pinduoduo 4Q 2019: The Unstoppable Rising Star of E-Commerce

The young Chinese web juggernaut is proving the feasibility and effectiveness of its “10 Billion RMB Subsidy Campaign.” 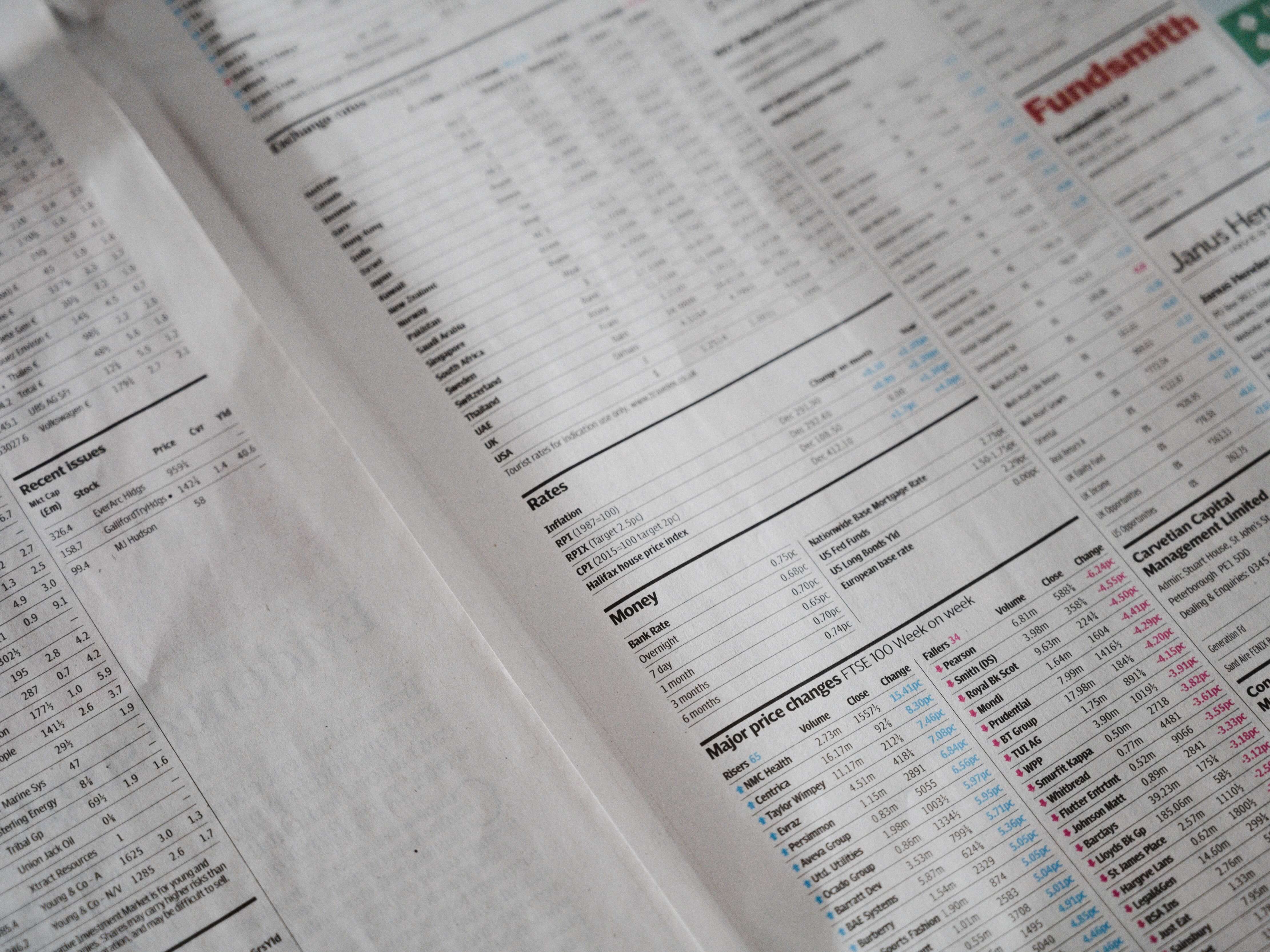 This result is the aftermath of its major financial indicators from the quarter – revenue and operating losses. The former beat expectations while the latter did not. For this mixed result we can look to its strong performance in the central terms in the e-commerce sector for the entire year – GMV (Gross Merchandise Volume), active buyers in the last twelve months (active buyers for short), and MAU (Monthly Active Users) – as well as the recent crash in the US stock market.

The firm reported quarterly total revenue of CNY 10.79 billion (USD 1.55 billion), which was slightly lower than the CNY 11.12 billion (USD 1.60 billion) picked by average analyst estimates on Bloomberg. It’s CNY 1.34 billion (USD 192.0 million) non-GAAP operating loss had narrowed down considerably, as compared to both the CNY 2.11 billion in the same quarter of 2018 and the CNY 2.12 billion in the last quarter of 2019; meanwhile, this result was lower than the average market perception of CNY 2.59 billion.

Key operating figures generally show a strong pattern, both in terms of absolute number and growth. With a 113% year-on-year increase, Pinduoduo’s GMV surpassed RMB 1 trillion for the first time in 2019 – a significant milestone if talking about scale. Active buyers reached 585.2 million (77% year-on-year growth), which implies that more than 40% of Chinese people have placed at least one order on the platform in the past year (if we assume ‘one person, one account,’ which is generally not unreasonable).

With CNY 1 trillion GMV and 585 million active buyers – Pinduoduo is marching towards the status of mainstream e-commerce platform, covering every class of person around China

The fourth quarter of every year is undoubtedly the fiercest battlefield for e-commerce platforms throughout the world – in the West, there is Black Friday and Christmas, in China, Singles Day and ‘Double 12.’

Unfortunately, these two huge shopping festivals that come at the end of the year – put forward by TMall, emphasizing the promotion of branded products with a higher Average Selling Price (ASP) – do not mark out the home court of Pinduoduo.

On top of this, it is not excessive to say that this fourth quarter that just passed was the most stressful since its establishment in 2015. Both PDD’s major incumbent competitors – Alibaba (BABA: NYSE) and JD.com (JD: Nasdaq) – significantly enhanced their firepower against the latecomer who is sharing a considerable slice of the cake. Spotting the wide market in the lower-tier cities – the base of Pinduoduo – they have been launching their own “10 Billion RMB Subsidy Campaign (the Campaign)”.

Therefore, although Pinduoduo is still far from being able to stand up to TMall and JD.com as an equal in terms of GMV – especially in the fourth quarter – the 53.15% year-on-year quarterly GMV growth it achieved is fairly eye-catching. It demonstrates the dynamic of growth of Pinduoduo, as well as the decision-making capabilities of the management under unfavorable conditions.

On the other hand, the active buyer figures of Pinduoduo (585 million) are rapidly approaching those of Alibaba (711 million) while it is widening its gap with JD.com (362 million). 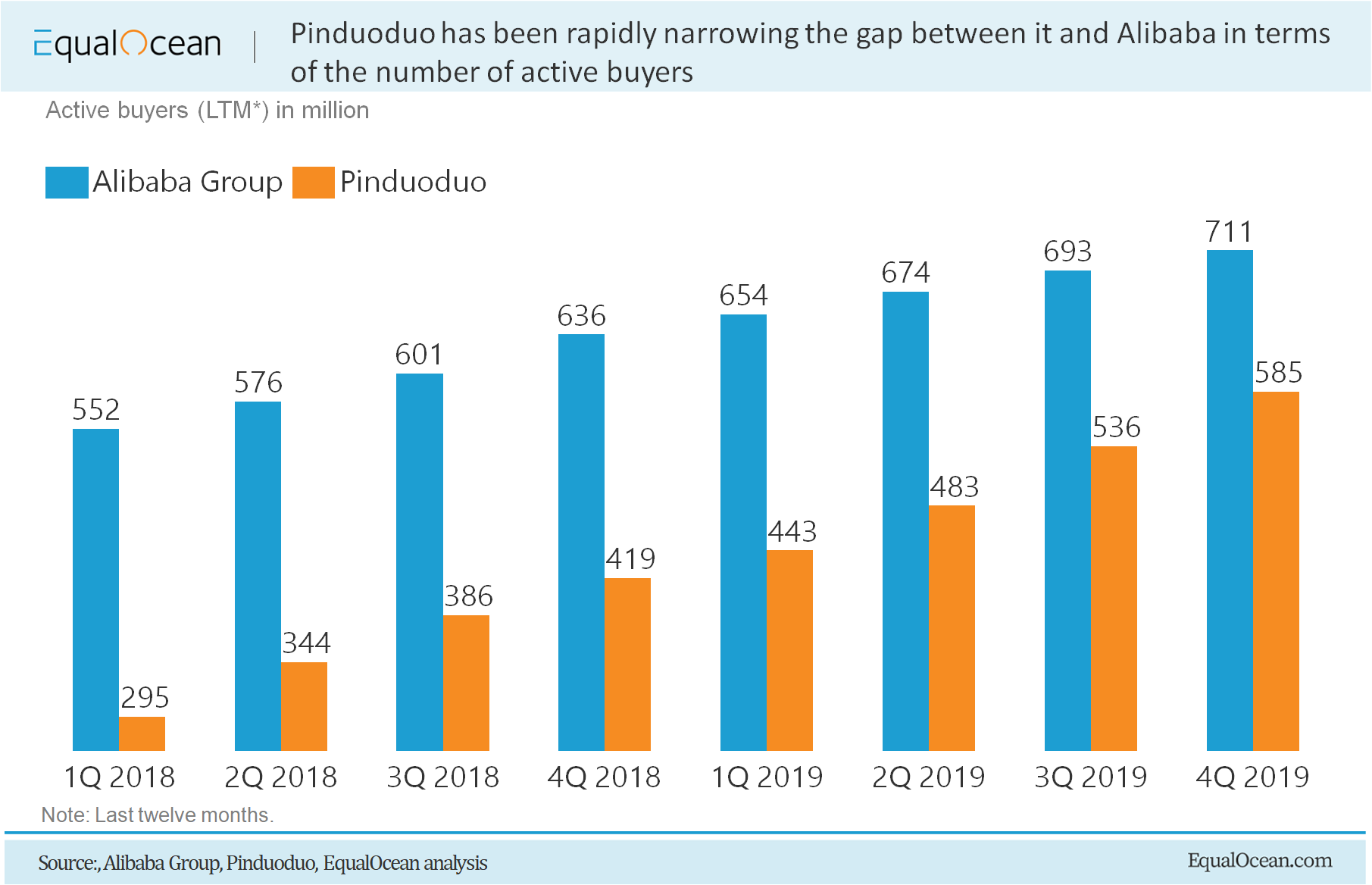 With this large user base, the traditional view that ‘Pinduoduo can only attract low-tier cities’ population’ is hard to back up; in fact, there are more figures in its fourth quarter of 2019 financial report that can refute this long-standing trope – for example, the growth rate of Average Revenue Per User (ARPU) compared to that of the number of active buyers and the average user engagement level. This will be elaborated in the following part.

Since Pinduoduo started the Campaign in June 2019 to heavily lower down the price for 3C products (Computer, Communication, and Consumer electronics) – which tend to have relatively high ASP – skeptical views on the effectiveness of this straightforward strategy have never stopped.

From its fourth quarter of 2019 financial report, we can see observe that the campaign has truly been helping Pinduoduo in attracting ‘high-end’ users and keeping a considerable part of them active on the platform, while sustaining the relevant costs in a controllable range.

Pinduoduo realized considerable growth in terms of both annual active users, which it already has a certain scale on, and ARPU – possibly one of its primary weaknesses compared to its major competitors.

This implies that Pinduoduo – which started its business with a ‘value-for-money’ strategy that largely attracted people in low-tier cities – has truly been successful in reaching a population with higher purchasing power (whether it was the increased spending of its incumbent users that contributed more or the new users from high-tier cities contributed more, is not the central issue).

In this case, we see that the Campaign indeed supports Pinduoduo in moving towards a mainstream e-commerce status, serving users of many stripes.

Although it is hard to quantitively measure the repurchase rate of new customers acquired through the subsidy campaign – who tend to have higher purchasing power – from the figures disclosed in Pinduoduo’s financial report, we can have a rough idea of it through looking into the average user engagement level (as measured by average MAU/average active buyers [LTM]).

The figure was 82% in the fourth quarter of 2019, representing a 17% increase compared to what in the same period in 2018. Besides, we can see that this figure appeared to increase significantly and continuously after Pinduoduo launched the Campaign in June 2019. 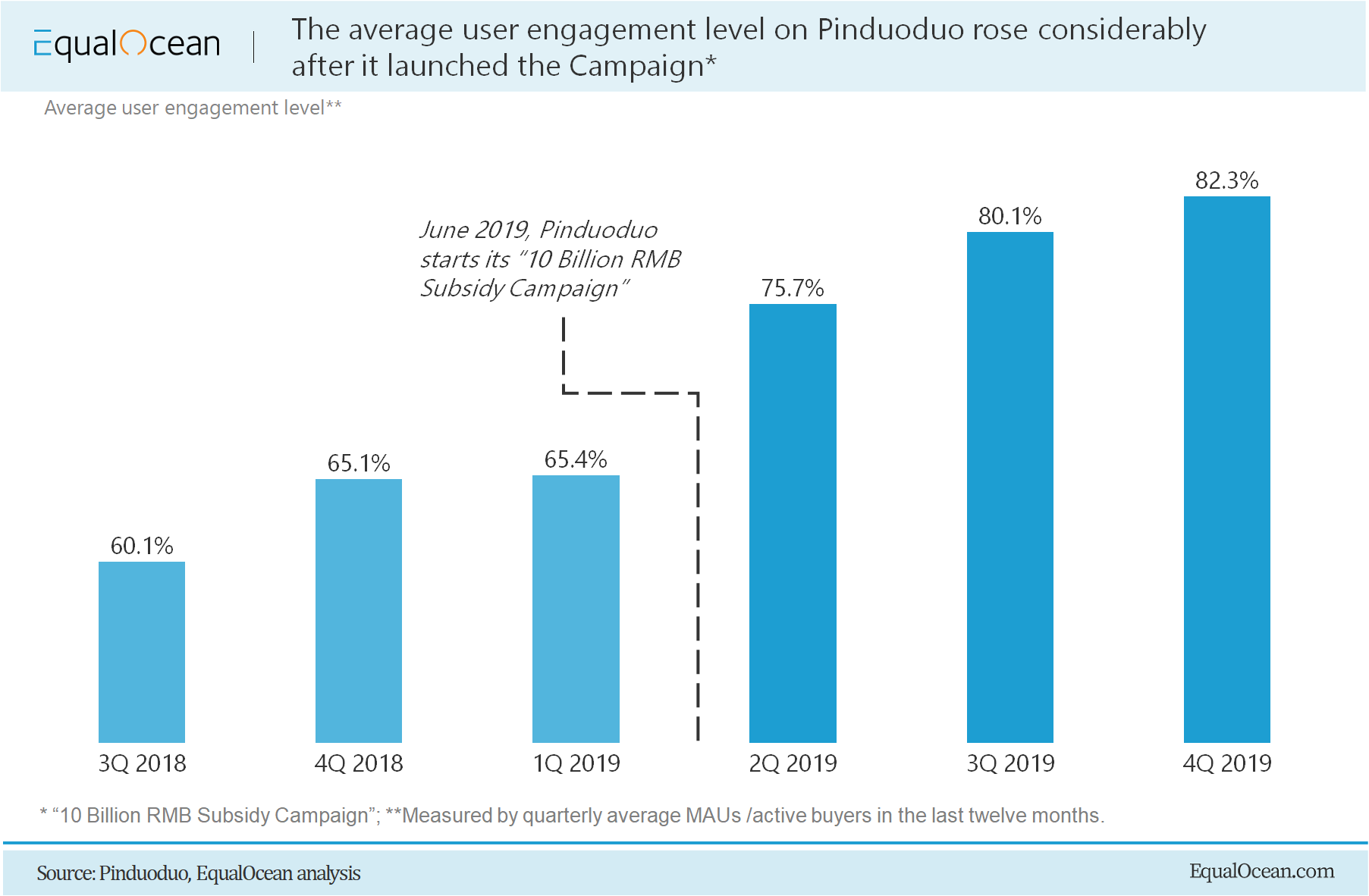 The above pieces of evidence from the engagement level apparently do not support the hypothesis that holds that ‘a majority of the new ‘high-end’ users only aim at taking the benefits from the campaign on Pinduoduo and will never open the app again and repurchase items on it.’

Therefore, even we cannot say anything regarding the exact level of repurchase rate of new users, who tend to have stronger purchasing power, from its financial report; we can at least conclude from the pattern in engagement level that this rate is not likely to be very low.

Increasing efficiency in subsidy campaign, and sufficient cash holding as a backup

If we compare Pinduoduo’s sales and marketing expenditure as a percentage of total revenue before and after the company launched its subsidy campaign, it is not hard to find that the strategy is working more and more efficiently. 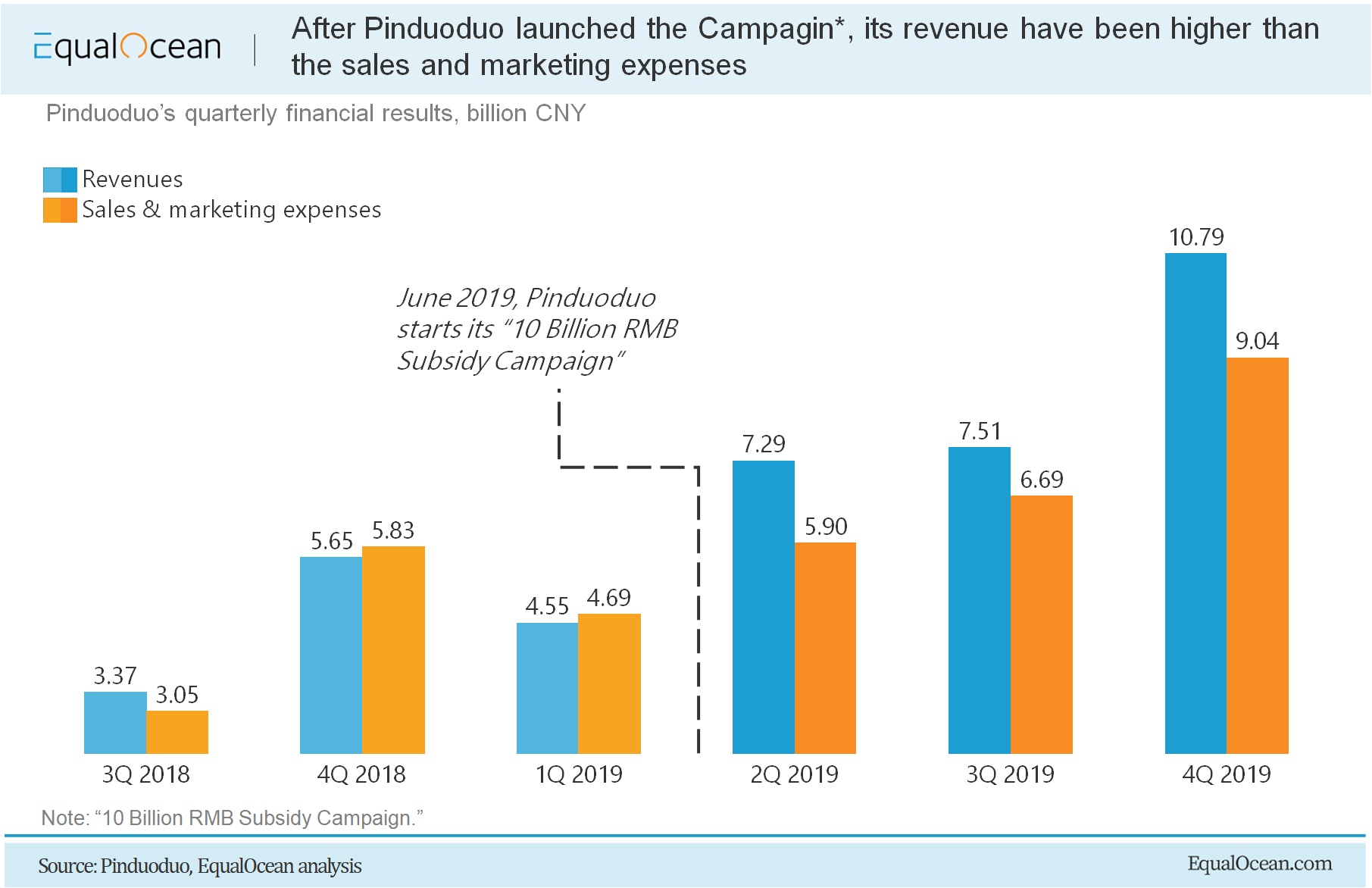 Two of the three quarters prior to the exercise of the campaign (3Q 2018 –1Q 2019) witnessed the awkward situation that its sales and marketing expenses could not even be covered by its total revenue. However, this ratio lowered down to 90% or below in the three quarters after the campaign was initiated. This implies the revenue growth is higher than the growth in sales and marketing expenditures.

Moreover, Pinduoduo had CNY 33.3 billion (USD 4.8 billion) in cash on its account by the end of 2019; this number has been growing over the past three years. This suggests the company is still holding a relatively fair amount of capital to support its aggressive marketing campaign.

Check out our previous analysis on the logic of the Campaign during Pinduoduo released its third quarter of 2019 financial report.

The bottom line – how we shall regard Pinduoduo?

Pinduoduo is getting better armed in its competition with JD.com for the second spot on the table of China's e-commerce market. Meanwhile, with the Siphon effect and the actions of Tencent to intensively control the ‘induced sharing’ activities on WeChat since the second half of 2019 (which didn’t harm Pinduoduo that much, as it has a warm relationship with Tencent), those small-scale copycats of Pinduoduo will be gradually pushed out of the market.

However, it is also scarcely possible that Pinduoduo will disrupt the status of Taobao and Tmall. Just like Rome wasn’t built in a day, the huge gap in the entire ecosystem will make it extremely difficult to catch up.