Why Hillhouse and Meituan are betting on the firm. 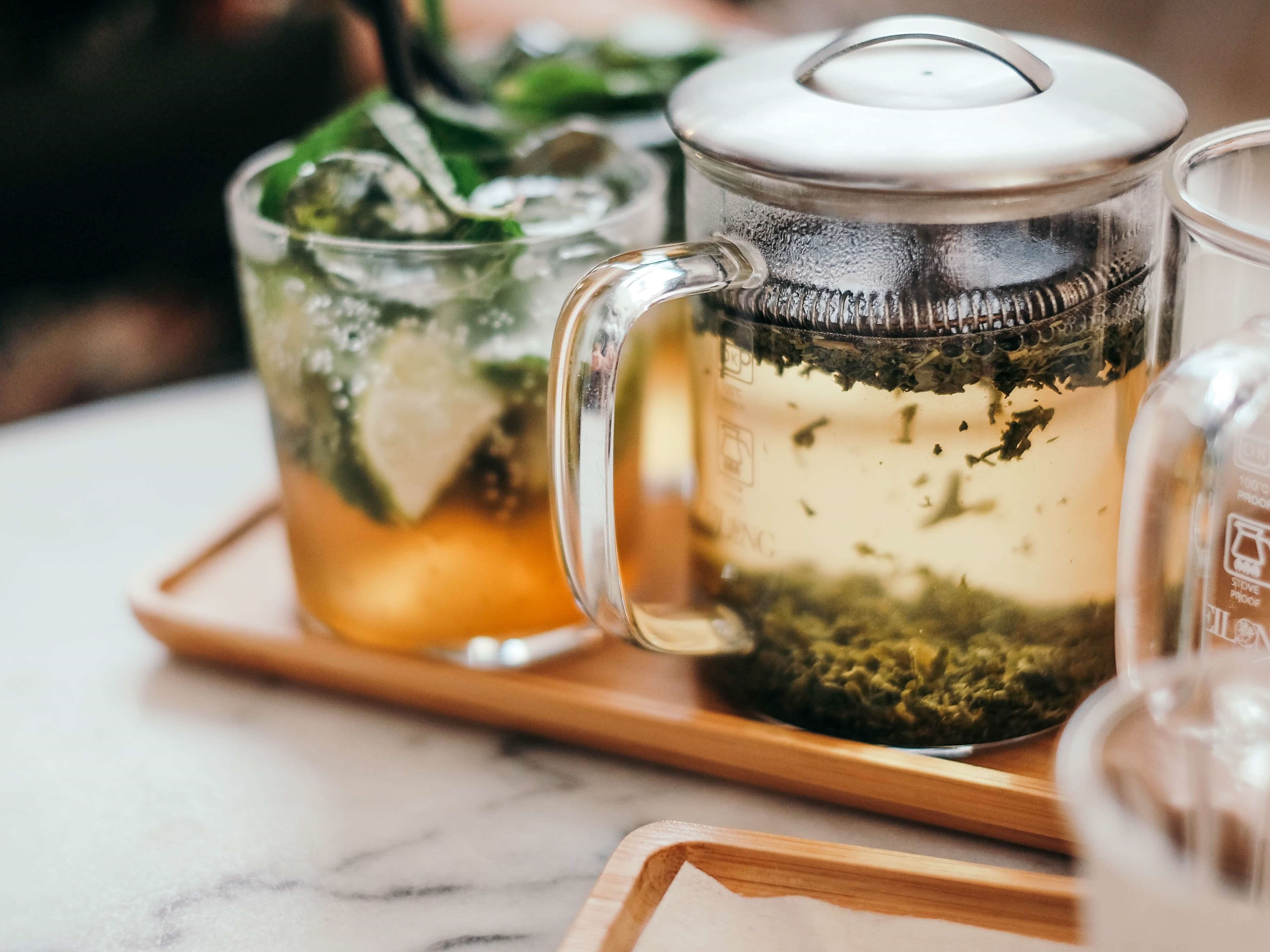 HeyTea is a Chinese beverage startup unicorn known for its milky, unusual (sometimes cheese-topped) tea drinks, which have revivified a deeply traditional beverage that had long been falling out of favor with Asian youth.

The so-called ‘new tea’ market is still at an early stage. The next step – becoming standardized like coffee – is some time ahead. The brands in the lead now are those most likely to survive and thrive in this new subsector of the beverage industry in the long term. We see HeyTea as one of these key leaders – and one of the brands shaping the industry.

Investing in mini-programs and ‘Go store’ initiatives in search of future growth.

Pandemic statistics prove the firm’s ability to maintain customers during extreme circumstances – and have become sought-after leaked data for investors.

HeyTea’s DCF-driven EV implies 18x 2020E earnings (EBITDA) under the base case, 15x and 21x under the bear case and bull cases, respectively. We are bullish on HeyTea heading into the rest of 2020. Revenue growth is driven by new stores being added and the growing number of tea drinks sold per day.

This yields a DCF value of CNY 19.1 billion based on a 15% WACC and a 2% terminal growth. Though the coronavirus has inevitably shaken the market in the first quarter, we predict that the targeted traffic HeyTea possesses, along with its standalone online channel, will further fend off competition from those who rely more on offline experience. 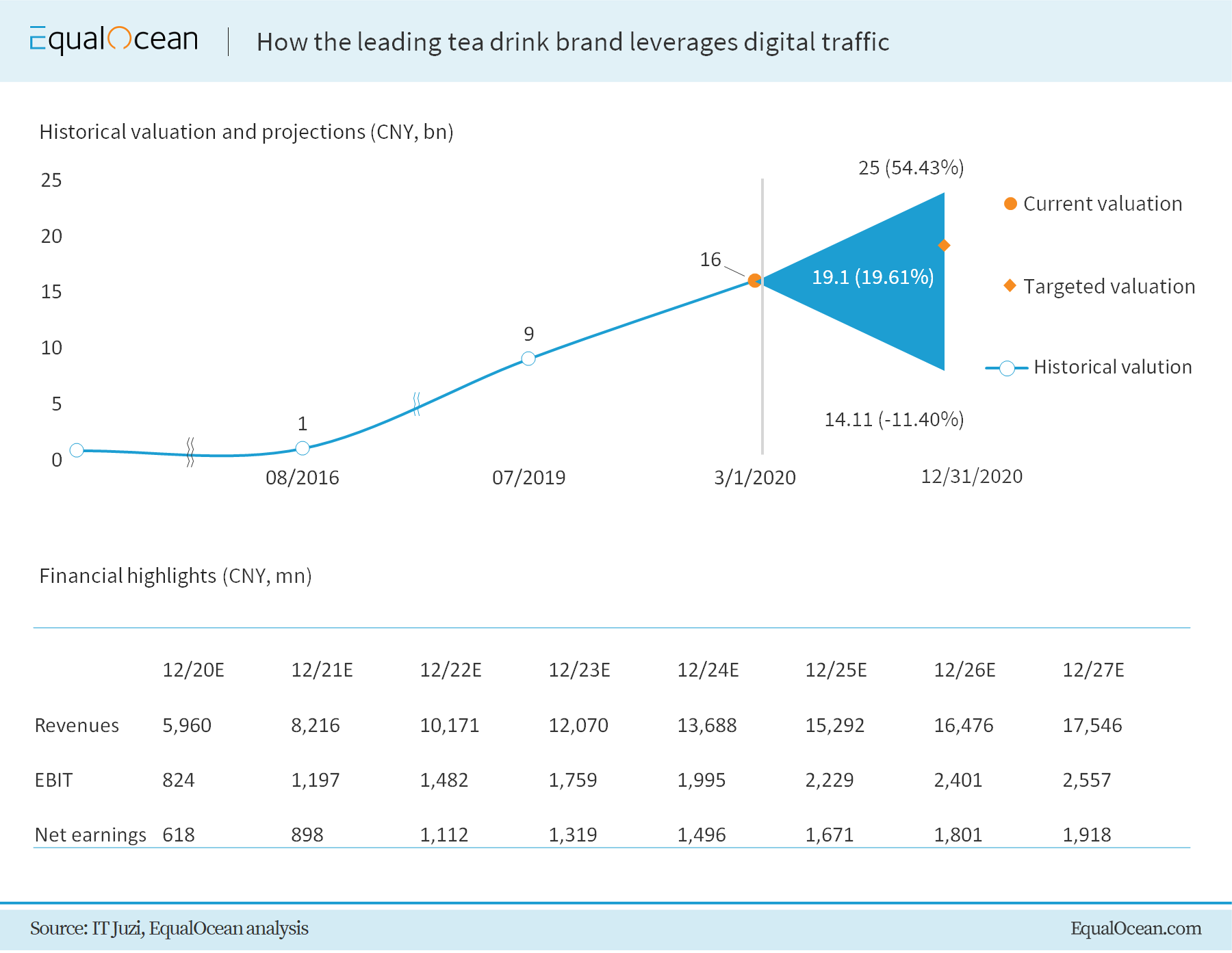 Ability to beat the competition and penetrate new markets.

A competition across categories is more of major concern. Giants never miss out in China’s tea market.

Starbucks tried with its Teavana series (failed in 2017) and the next in line is Luckin. Luckin’s tea series Xiaolu has expanded fast, gaining traction from its franchise model and massive traffic through the app Luckin Coffee owns. The engagement of these two has already shown that tea drinks are complementary – not contradictory – of other beverages (coffee, soybean milk, oat milk).

While improving higher coverage across the targeted market is essential and difficult, maintaining a well-established brand reputation and customer loyalty can be even harder.

New product additions fail to roll out or don’t succeed.

Secular growth is expected to be led by tier-3 cities

Following new customers’ purchasing preference for freshly made teas instead of beverages made with mixed milk tea powder, the industry ushered the era of new tea beverages, represented by Lelecha, HeyTea and Nayuki. Data from Meituan shows that tea drink store sales are expected to reach CNY 77.9 billion in 2021. 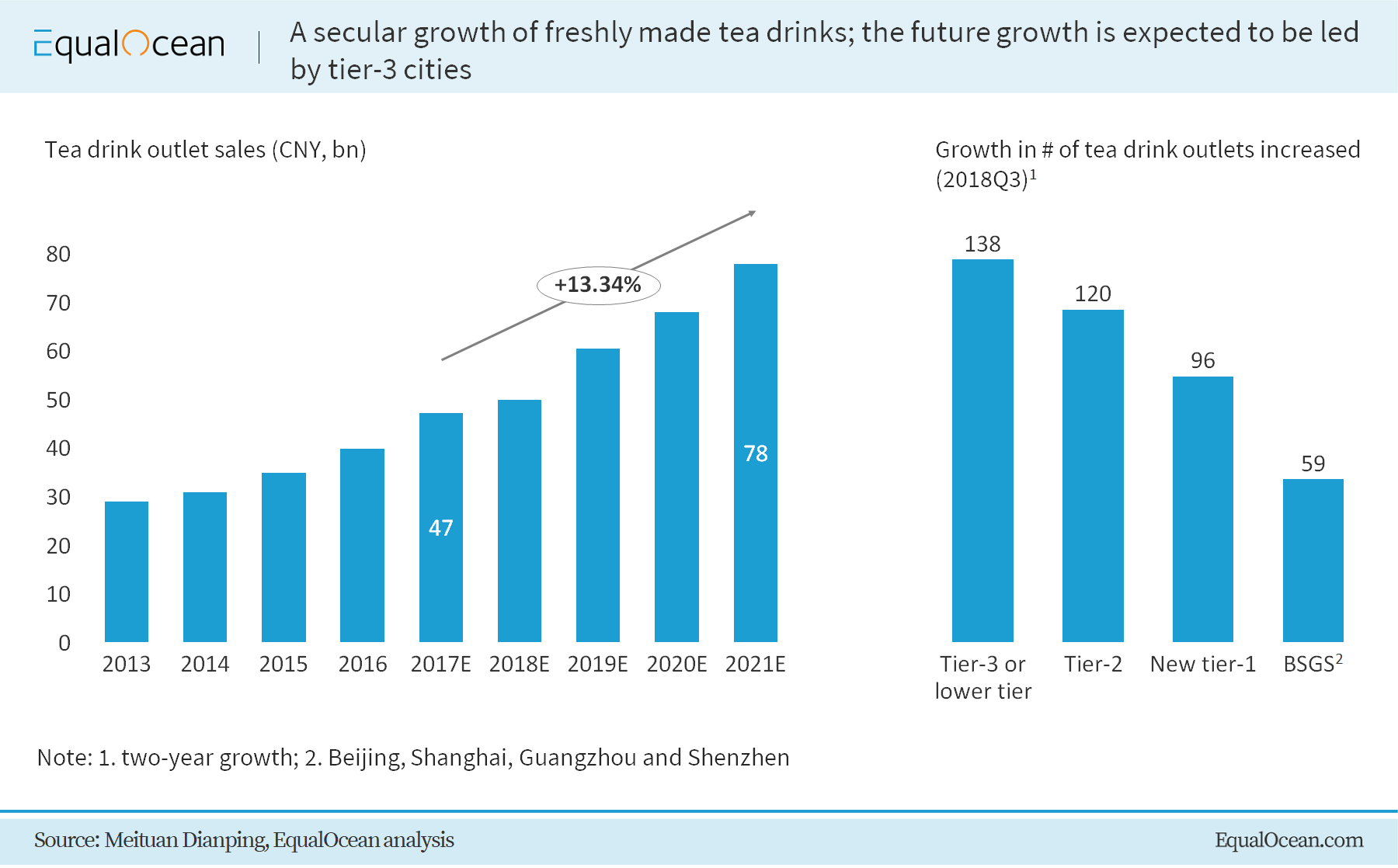 New tea drink stores are likely to ratchet up CNY 40 billion to CNY 50 billion in the following year, according to CMS Securities expectations.

Low barriers to entry help a big market to expand.

The number of new tea drink stores had reached 410,000 as of 2018Q3, a 74% increase over one year previously. Most of the stores are franchise stores. Compared with several leading self-operated brands (for instance, HeyTea and Nayuki), they require less capital, technology and related food-produce licenses.

An initial sign of brand differentiation – Three leaders have an advantage in making teas that consumers love, but their strategies are different.

HeyTea sells tea drinks across all price levels, from CNY 9 to CNY 33 (or higher by adding more trimmings) and, thus, serves a broader customer base. Nayuki is positioned at the middle-to-high market and aims at cross-selling more (with bread), with a higher average ticker price (CNY 30). Lelecha relies on low prices and keeps adding new items to the menu.

Consumption downgraded – It is already a ‘red sea’ in tier 1 cities.

HeyTea differentiates itself in the tea market

Having started as a small store in Guangzhou, HeyTea has spent years in product research and innovation. When it marched into Shanghai in 2017, HeyTea saw a stellar year with 80 stores opening. Since then, the firm has emphasized three strategies that shape what it is now:

In an exclusive interview with the founder, we also learned that they will do monthly/quarterly/yearly reviews with tea plants to assure their performance. The digital supply chain enables the company to produce products efficiently with low marginal unit costs (MUCs).

The industry is getting mature, with the price of tea leaves sitting at CNY 100 per kilogram, CNY 12 per kilo for milk and CNY 25 per kilo for whipping cream. But the industry is yet to be mature enough compared with coffee, an industry shaped by Starbucks for years.

Those lead the way to standardize the industry as a whole and have considerable bargaining power with more orders, are likely to develop the tea market of tomorrow – in every aspect, from the size of cups, sweet degree, minute of tea boiling, etc.

A match of fancy stores and pick-up stores, as one defines the brand tone and the other accelerates turnover, respectively.

HeyTea learned how a fancy, big, well-designed store in a shining shopping mall helps to attract customers and strengthen customer loyalty. On the other hand, HeyTea’s Go store is smaller, mainly for food delivery. The firm opened 63 new Go stores out of 227 stores in total in 2019.

The gap between HeyTea and those lagging in adopting digital channels is widening, as HeyTea gains traction in every aspect.

During the coronavirus, rumors suggested that Meituan had increased its take rate to 30% from 14.1% in 2019Q3. Countering this, HeyTea’s mini-program initiative takes the pressure off, completely.

The company’s operating team combs through disparate data – average ticket price, order time, location, warm preference, and so on – to build a 'spy's brain' to analyze their 2.2 million registered members (remember that Shanghai had 24.24 million population in 2018).

The system then helps to display a customized customer interface that involves recommended store locations, top drinks and sales options for individual users.

Overall, the targeted traffic has improved with balancing inventories, boosting user experience (UE) and manipulating product innovation. For instance, HeyTea has introduced healthy stevioside as a substitute for syrup (making it the first in the industry to do so), leveraging data generated from its membership system.

Neither I, Feng Linyan, nor anyone associated with the creation of this article claim that this equity report accurately reflects my (our) current (as of date published) views about the subject security and issuer(s). I (we) were in no way compensated directly or indirectly in relation to the expressed recommendation.

CONTACT US
Scan QR code to contact us for professional consulting services
Next article
Hikvision: A Security Giant Embracing the AI Age