Banks in China and the US: Urgent Steps towards Digitalization 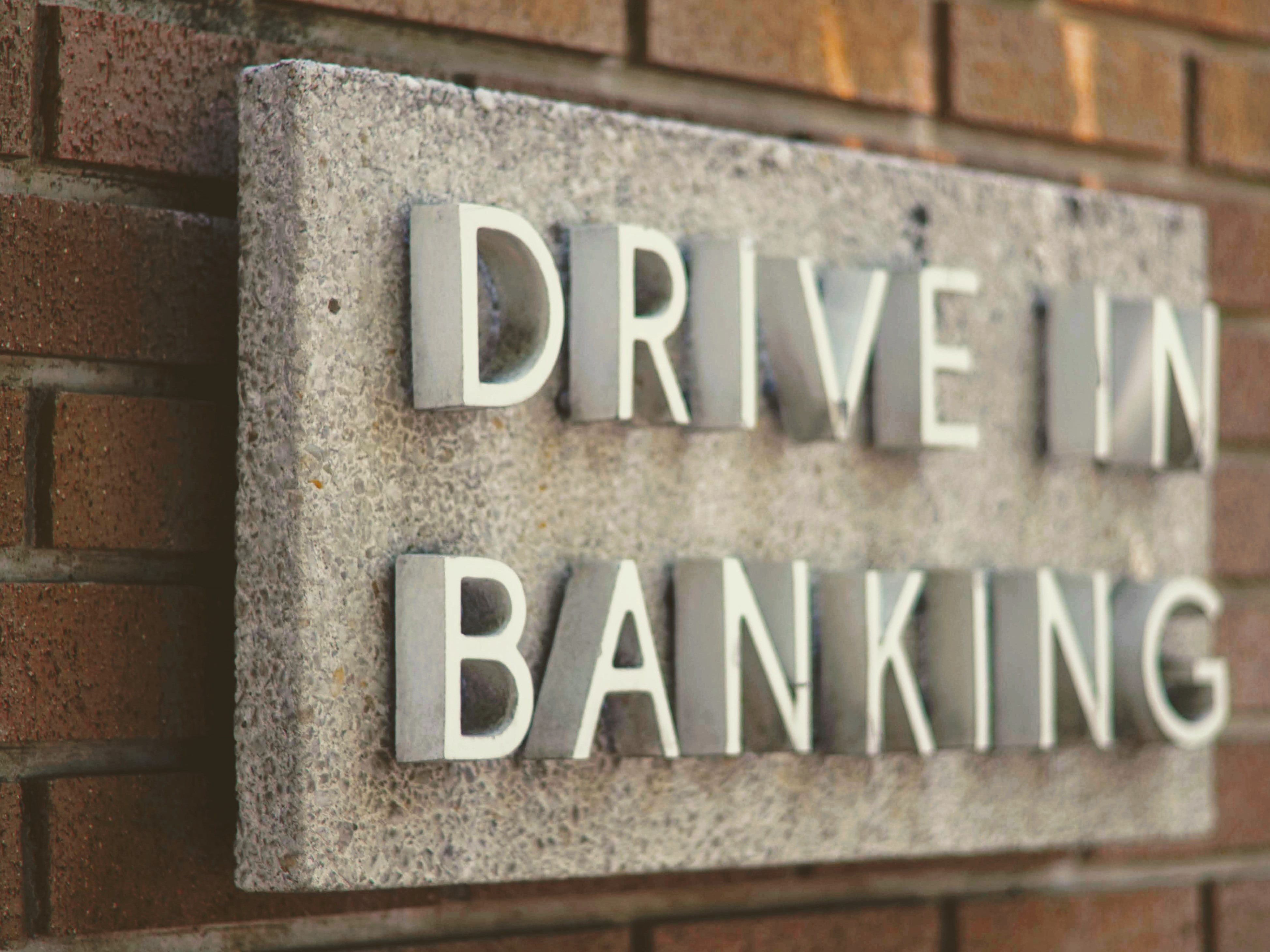 After the subprime mortgage crisis happened in 2008, banks said goodbye to their golden period of low capital, high profit, and increase. Together with the more restricted regulation environment and the low growth of the global economy, the banks have experienced something of a hard time.

Besides, as fintech trends, e-commerce and social media are leading the period, banks need to face new challengers who covet their business and users. Banks have realized this is an urgent task to step towards digitalization to keep their status and profitable business area. According to Business Insider's report, this year, 35% of all bank revenues could be at risk from more tech-savvy competitors; by 2021, global banks' IT budgets will surge to USD 297 billion. Moreover, tech giants like Google and Amazon are earning up to 50% of USD 1.35 trillion revenue from incumbents.

Although this concept originally originated from Europe, the biggest emerging market now lies in Asia Pacific. In developed markets in Asia, more than 80% of customers are willing to transfer part of their funds to banks that can provide reliable digital services. In emerging markets in Asia, the proportion of such customers exceeds 50%. The story for China began in 2014 when a batch of digital banks emerged suddenly, and the United States' story can be dated back to 1995, when its first Internet bank was established.

By reviewing the developmental progress and current market situation, we can have an understanding of their macro development environment and their next direction.

1.Technology is the key

The banks in the US actively took actions to face the potentially subversive possibilities of digital change, making huge investments into technology. In 2019, JPMorgan Chase's technology budget was USD 11.5 billion, ranking first in the industry, an increase of 5.6% year-on-year. Nearly half of the technology budget was used to implement disruptive technology applications internally, and the other half was mainly used in systems and data maintenance. The second-ranked US bank's 2019 technology budget also reached USD 10 billion, of which 30% was spent on technology innovation investment expenditures. Ranked third and fourth are Wells Fargo and Citigroup, with a technology budget of USD 9 billion and USD 8 billion in 2019. 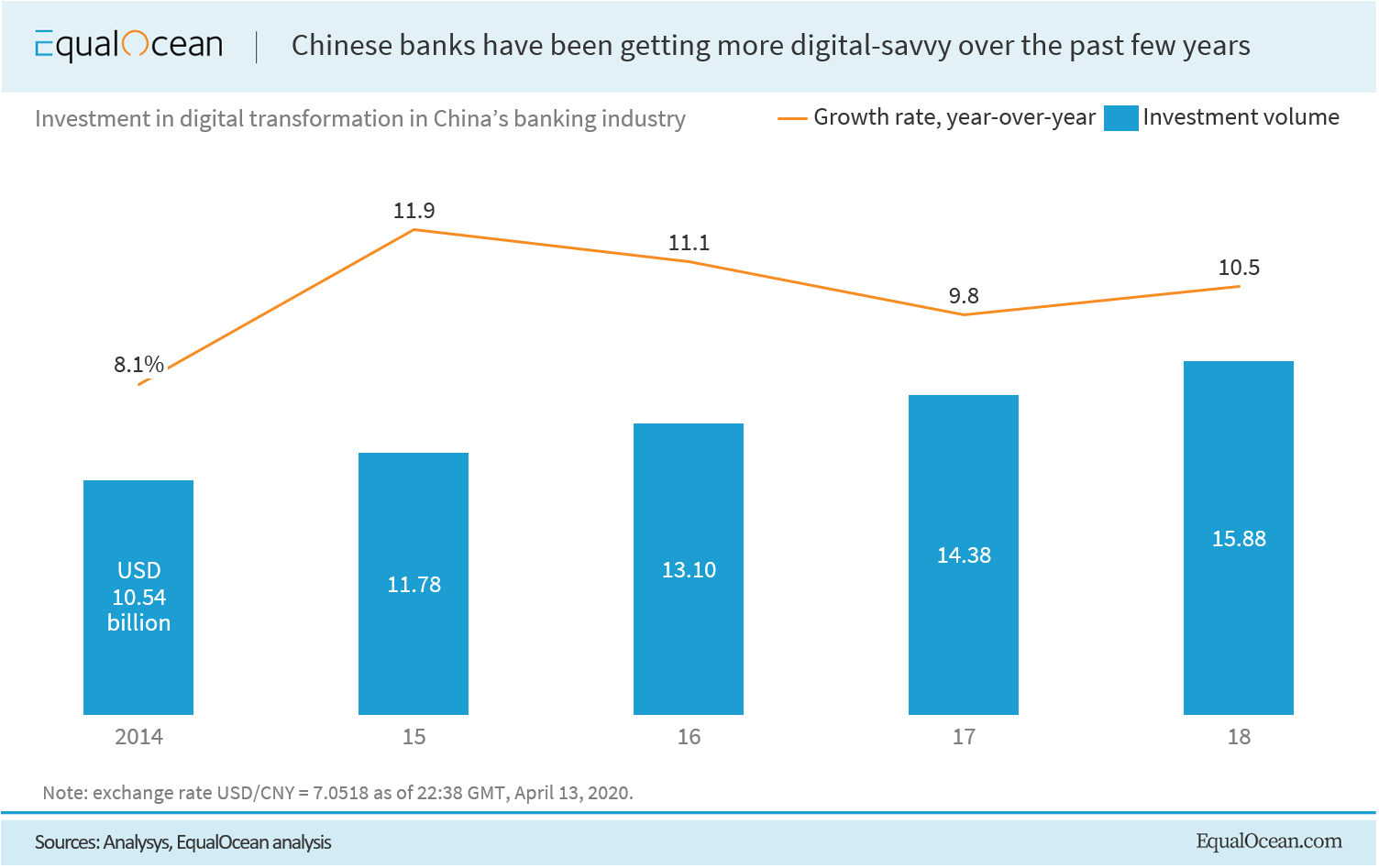 In addition, these Wall Street players also cooperate with fintech new players or M&A to enlarge their moats. As for banks in China, they are kind of lagging behind. Their transformation falls behind the fast development pace of technology and they mainly access the technology part through outsiders such as Internet giants, to help complete the upgrade. The IT investment of the whole bank industry in China in 2018 was CNY 112.1 billion (USD 15.88 billion) with slowly growing each year, but obviouly cannot meet the demand of technology transformation.

As China is regarded as the most significant emerging market for the fintech industry, the interaction of each sector is much stronger than other countries. Comparing the leading digital banks, Mybank in China and Chime in the US, one obvious difference is their way of acquiring customers. In 2019, Chime already had 8 million acounts, most of which came from debit card swipe fees, while Mybank focuses on lending to businesses. Another famous entity, Webank, is supporting Tencent, has Wechat as customer diversion and focuses on consumer finance and financial products. Mybank relies on the Alipay system, enjoying large customer traffic through mobile payment platforms, while Chime mostly relies on the company's Internet marketing.

The US hosts a mainly technology-driven and regulation-driven scene, while China is mostly scale-driven. The traditional financial services in the United States are more adequate and digital technology has always been a leading growth driver. With the development of digital technology, the financial industry has gradually adopted, updated and upgraded. In contrast, China's huge financial demands haven't been satisfied, which generates more complex requirements for digital banking, which in turn pushes forward new technological development. In the 2018 global fintech invention patent list, China accounted for 46% of the patents, surpassing the 40% of the US, and has become the world's first.

The market environments in these two countries are shaping digital banking differently. The first factor is the intensity of regulation. China's regulation is somehow a bit lagging behind the fast developmental pace of digital banking. Few laws have been released and the market can be considered as being at a brutal growth stage, while the US is another story, with restricted regulators and good consumer protection measures. Second is market scale. Although China's digital banking sector was born nearly 20 year later than that of the US, the scale of growth is extremely fast, leading to overtaking in corners. While Chime's customers reached 6 million in 2019, Mybank hit (in Chinese) 17 million. Third is core competence. The US is well-known for technology, the same in the digital banking evolution, technology talents are welcomed by technology giants and financial incumbents in the US. China's core strength is large-scale application. Enterprise layouts prefer areas with relatively mature technologies and clear application scenarios.

The digital moves of China will mostly be finished by Internet players and fintech firms. Banks are making efforts as well, but the level of technological maturity among digital solutions is not yet wholly comparable to that of the experts. And the talents are mostly gathered in giants such as Alibaba, Tencent and Huawei. China's market needs support from the government to promote innovation and regulate the players. As for the US, incumbents and new players will continue to exist in the market at this time, although new players will need to pay more attention to the long-tailed customers in order to attract clients. Above, risk control is definitively needed at a much higher level.