There Is No Unbreachable Moat around Megvii – or, Not Yet Part 1

Unlocking the secrets behind the company blacklisted by the US, and how it competes with Google, Facebook and Baidu. 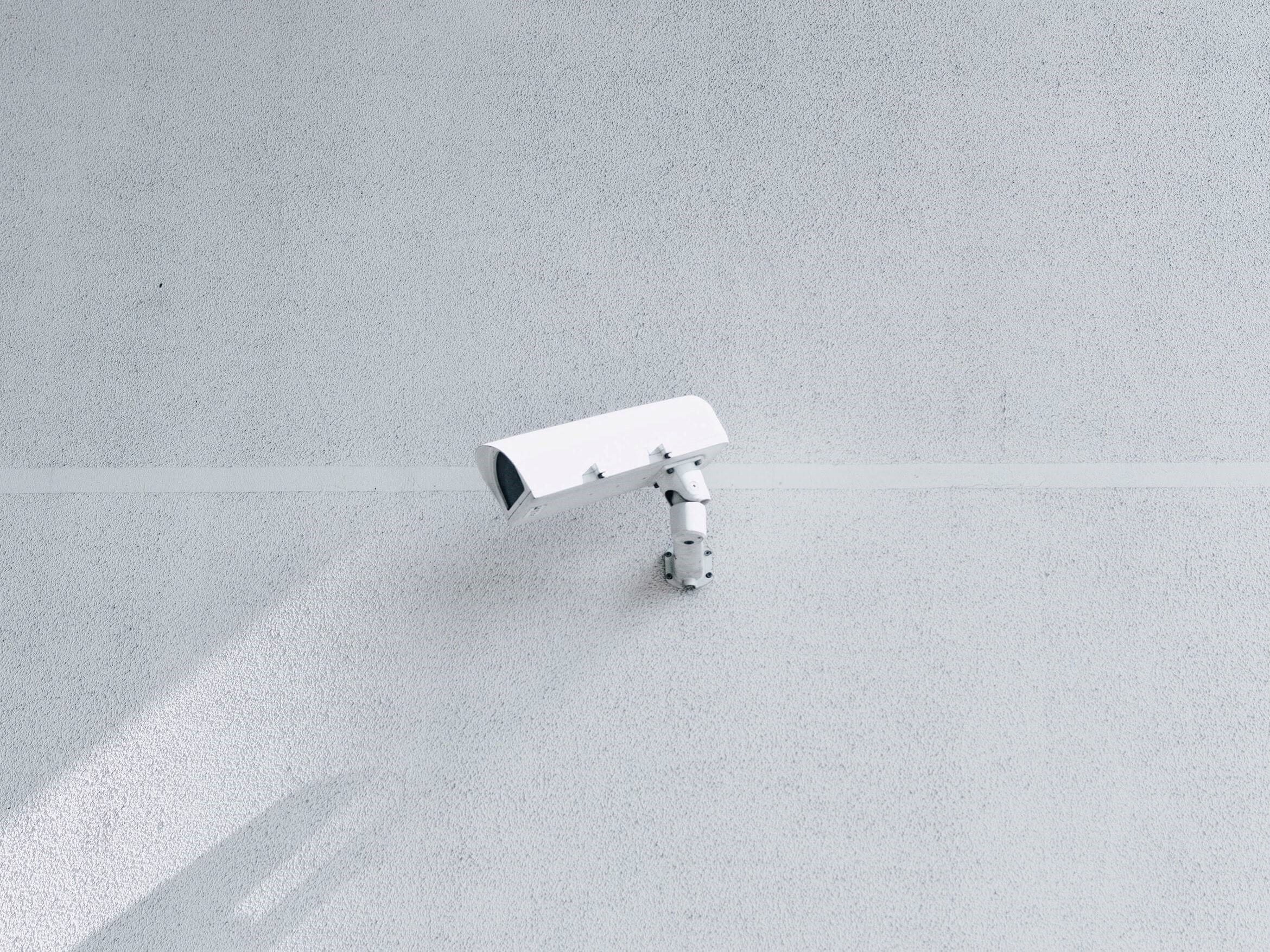 Attractive secular trends. Megvii occupies a unique place within the computer vision domain and benefits from increasing awareness about leveraging artificial intelligence (AI) and the Internet of Things (IoT) in managing business and public management from the government and business side.

Clear long-term strategic map. With the launch of open platform Face++ and open-source deep learning framework MegEngine, we see the company’s ambition in competing with large tech companies as well as grasping the core competence of AI.

Megvii’s cost structure for its SaaS and IoT solutions remains debatable. The business is a bit far away from being a classic SaaS and more like driven by software + services/consulting.

Services revenue weighs on the gross margins. The services business is naturally not as scalable and operates with low margins. Megvii’s business builds on its IoT solutions, contracting with government agencies (more precisely, system integrators). Only with better margins can the business scale faster – not the other way around. Here, the income statements tell the story already.

Data ethics problems. Megvii’s services and products have been interacting with a significant amount of sensitive information. It has an additional responsibility to protect its from information leaks and hacks, as well as a duty to deal with regulatory/compliance issues.

Megvii is the first so-called artificial intelligence unicorn to try to list on the public market in China. The company provides full-stack solutions that encompass algorithms, software and IoT devices to its customers. In this article, we focus on its business model, revenue potential and competitive risks.

Megvii started in a niche area within the face recognition domain. It then launched the first computer vision (CV) open platform – Face++ – of the company in Oct 2012, one year after its inception.

Megvii derives its revenue through two standard pricing models (SaaS subscription and professional services) and one special business that it calls ‘personal devices.’ Like other Software-as-a-Service (SaaS) companies, Megvii charges by a pay-per-use model for its Face ID (a cloud-based identity authentication product) and Face++ under the SaaS business.

Megvii generates revenues for professional services primarily in two segments and charges on a project basis: government and commercial. Worth noting is that a significant portion of Megvii’s direct customers are system integrators, which provide various types of assistance in project implementation, and are not the end users. 93% of revenue in the first half of 2019 came from its city IoT solutions, whereas the rest was generated from its commercial segment supply chain IoT (retail and logistics). 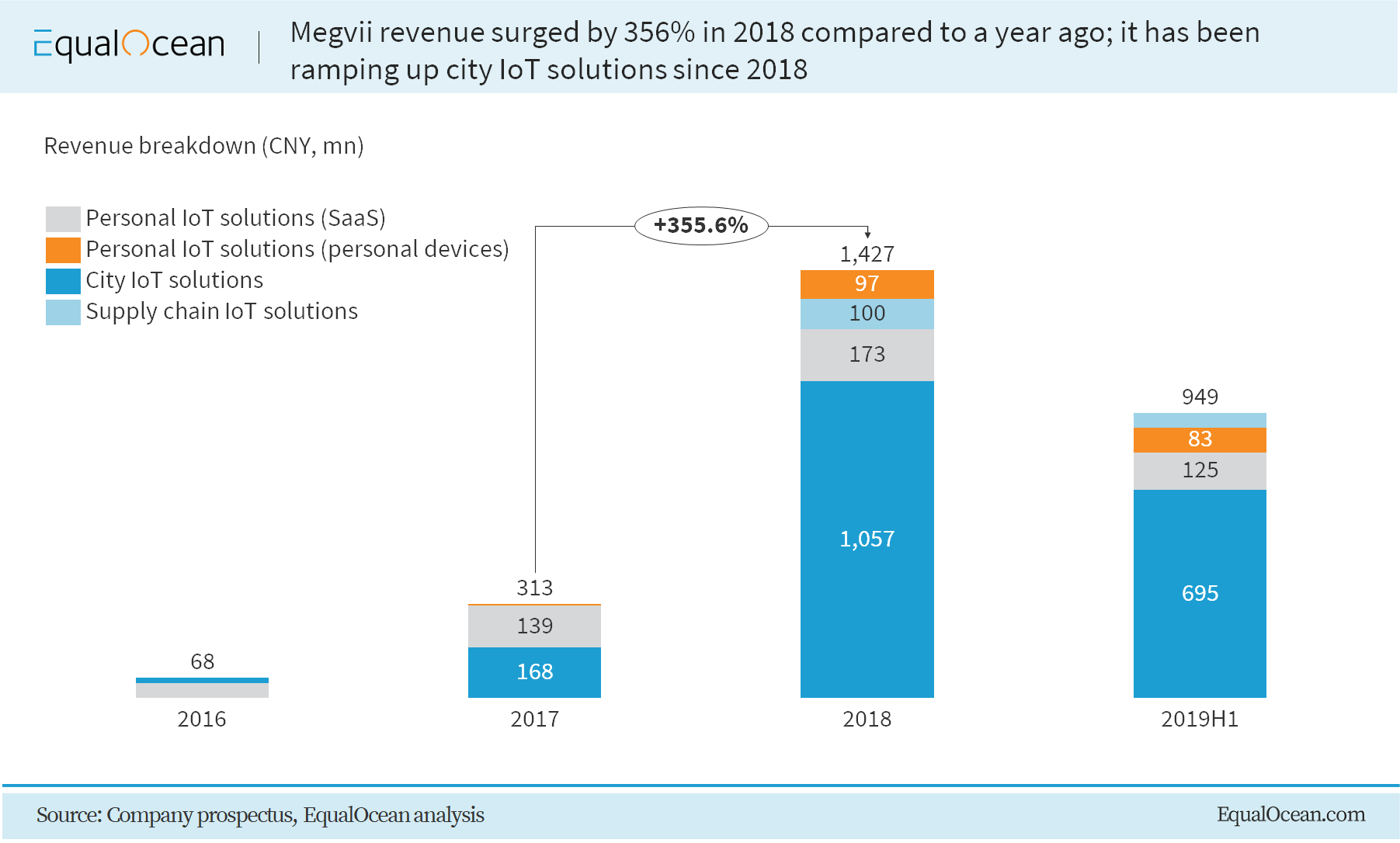 Megvii productized the business and earned CNY 5.9 million in 2017, one year earlier than its SaaS offerings. The gross profit saw a sudden plummet in 2019H1 due to the firm delivering more camera modules. 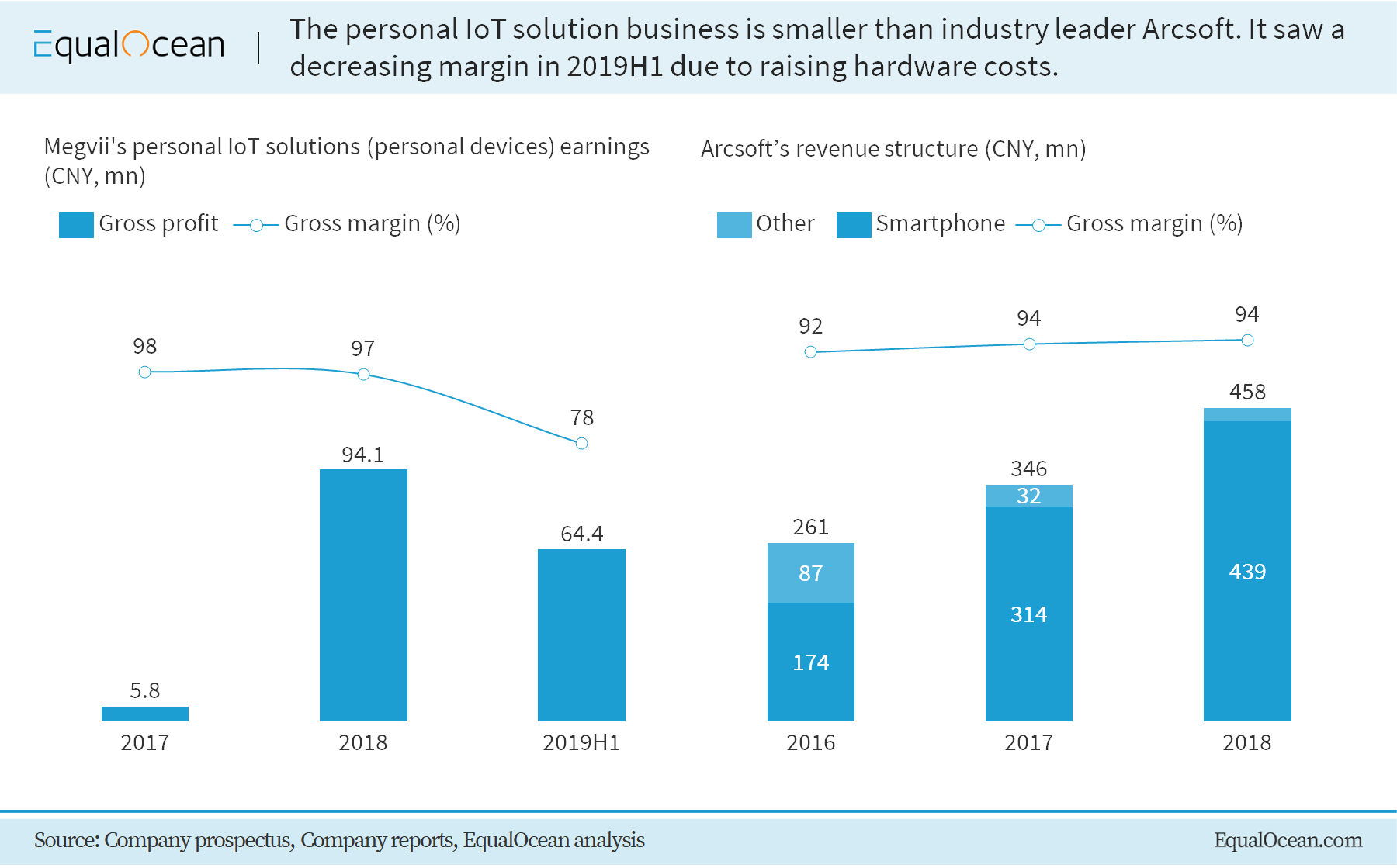 Arcsoft (688088:SH), Nuance Communications (NUAN:NASDAQ) and Gracenote, among others, are competing in the niche worldwide. Arcsoft is now trading on China’s new Star market at a 122x earning level with a valuation of CNY 25 billion as of April 24. Arcsoft provides single/dual camera solutions for smartphone manufacturers, which fit various hardware configurations.

It has achieved CNY 438 million revenue from its smartphone business, with a 94% gross margin. While Arcsoft’s revenue and gross margin were on a steady growth stage from 2016 to 2018, Megvii saw a meaningful dip in 2019H1, as mentioned above. As a relatively new player in the market, it is reasonable that Megvii has entered into a new stage in delivering products. In essence, it has to work more closely with camera module manufacturers, camera sensor manufacturers and System on a Chip (SoC) platforms. Megvii might need to switch to a different type of camera module for different types of mobile phones to drive the development of camera technologies fast. As a result, the cost of sales surged 17x to CNY 18 million in 2019H1 from one year before.

The cost of sales is attributed to two elements: 1) hardware and 2) project outsourcing or technologies services. Considering Megvii’s own claims, we think the previous assumption is reasonable. In essence, the gross margin dip will jump back to normal levels when Megvii reaches the critical mass of producing deliverable camera modules.

Megvii’s SaaS offerings, however, are far beyond the SaaS concept that Wall Street and VCs admire

When it comes to Megvii, its SaaS business contains a data source cost, which is unusual for an SaaS offering. China, famous for its extensive public security market (USD 80 billion) as well as significant spending on tech-enabled surveillance (USD 30 billion), is also well-known for its abundant pool of data. But data alone is not enough for building AI software – data must first be labelled, which requires much labor.

The current machine learning technology is still in an early stage. Thus companies researching it are running algorithms on various datasets to train their models, which means large overheads for purchasing these data sources.

As such, AI businesses are very different from software businesses, whether it is in terms of cost structure or competitive advantages. 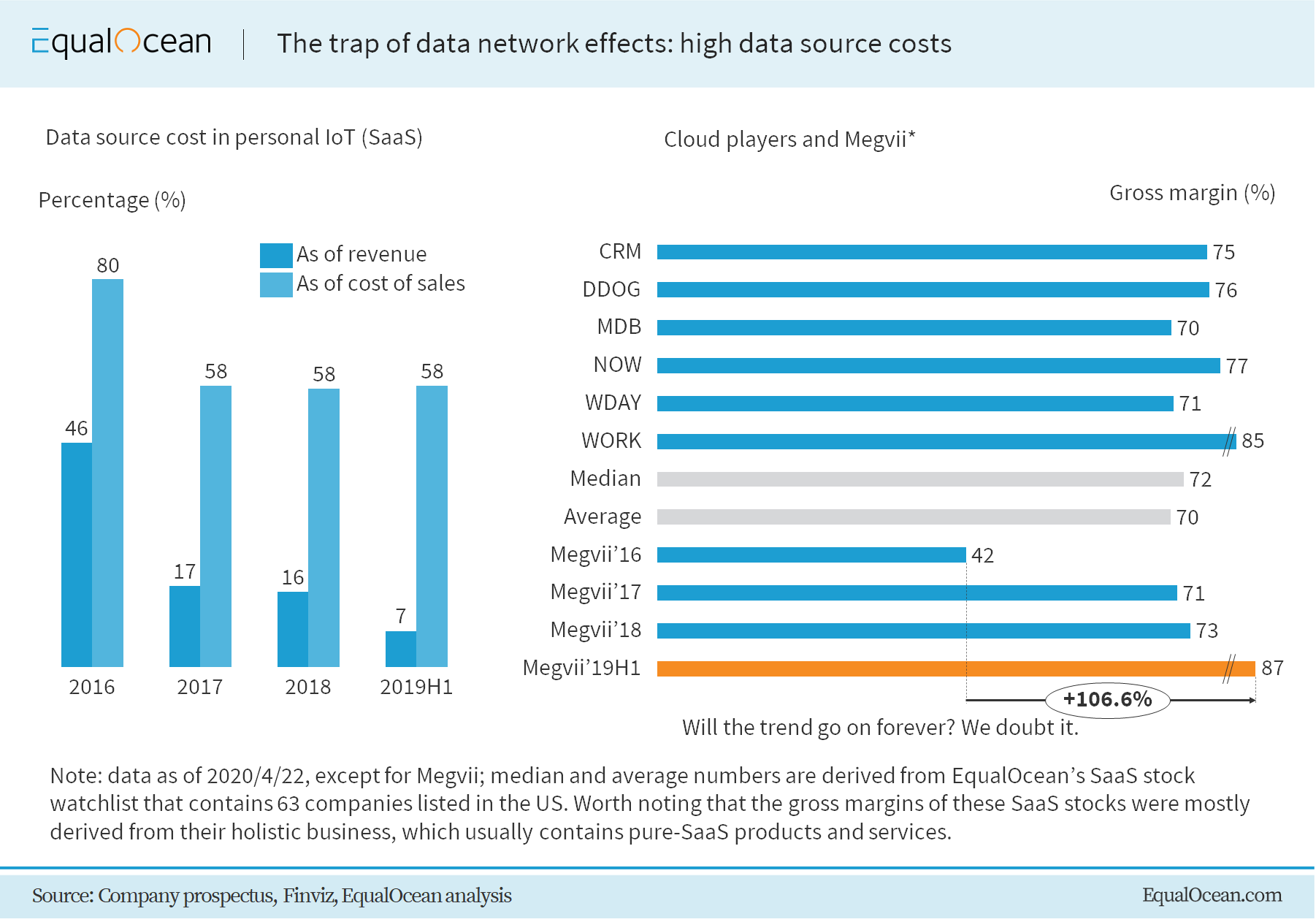 The gross margins are lower. An SaaS business means a high gross margin (60% – 80%), with the cost of sales mainly attributed to cloud services. SaaS stocks maintain their gross margins, ranging from 70% to 85%, with a median margin staying at 72% and averaging at 70%, as of April 22, from the 63 SaaS stocks selected. Compared with these mature firms, Megvii’s gross margin shows a continuous growing trend from 2016 to 2019H1. It even reached 87% in 2019H1, a 106% increase compared with 2016. But we do not think this will continue in the near term, mainly from the observation that data source costs will remain a significant part of revenue.

There’s a long tail problem. A study conducted by Arun Chaganty at Eloquent Labs (quoted by a 16z) that researched questions submitted to a chatbot in the customer support space shows a diminishing marginal value of data. When 40% of queries have been collected, there is no advantage to collecting more in this case. AI startups have to devote more time and resources to deal with noisy, unstructured data. They also need to think through edge case difficulties, which is a tough job that traditional software companies won’t face when they build and deploy their products for their earliest customer cohorts. Megvii’s whole R&D special expenditure – including data obtaining and labeling – represented 14.9%, 11.4%, 6.1% and 6.5% of total revenues in 2016, 2017, 2018 and 2019H1, respectively. 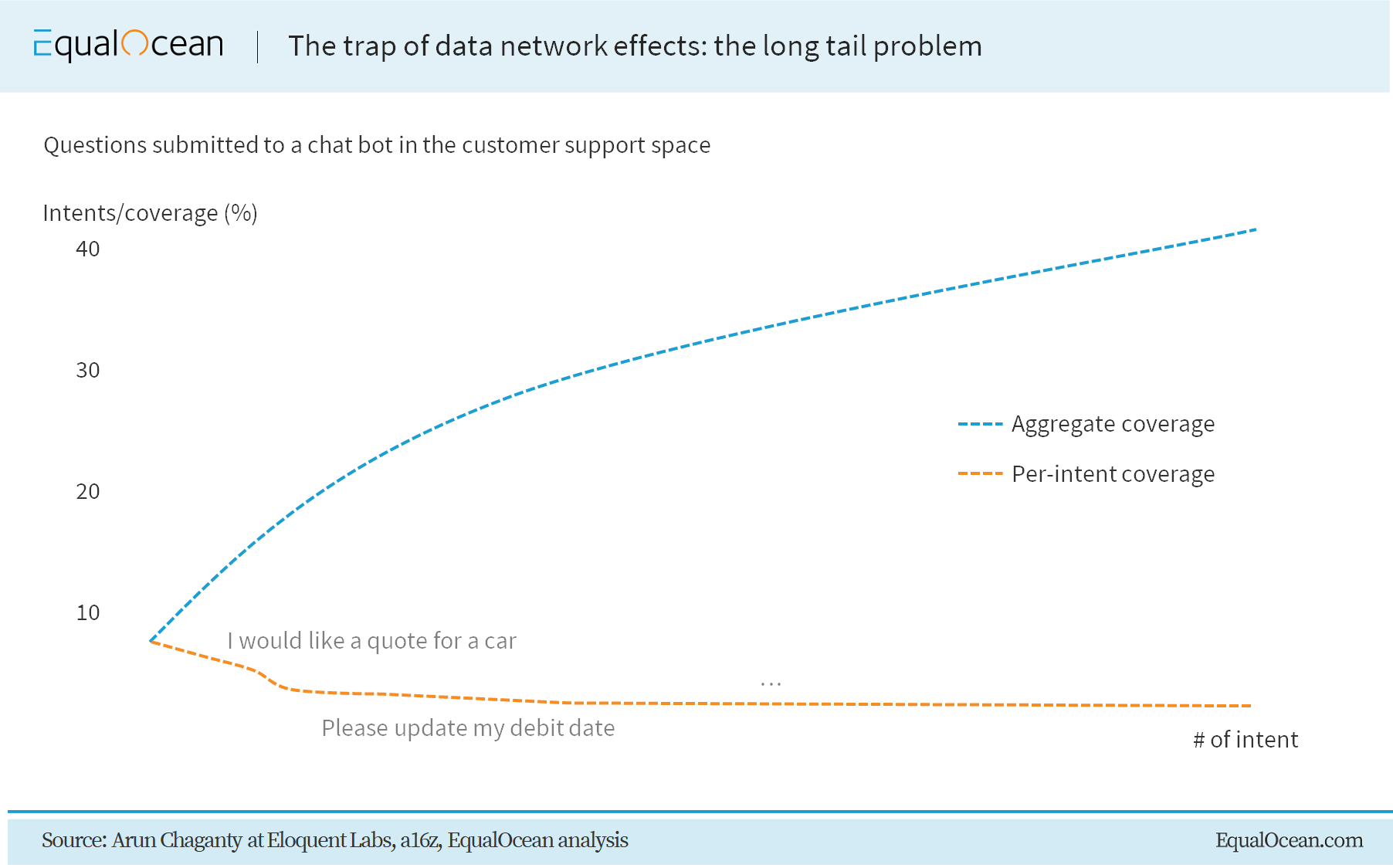 AI is early in its development, and has been witnessing sharp declines in both AI training costs and inference costs. In 2018, the cost to train a neural network like ResNet-50 was USD 358. In 2019, it dropped to around USD 20. The cost of inference has dropped meanwhile. The cost to perform inference on 1 million images went from around USD 15 at the end of 2017 to USD 2 in earlier 2019. 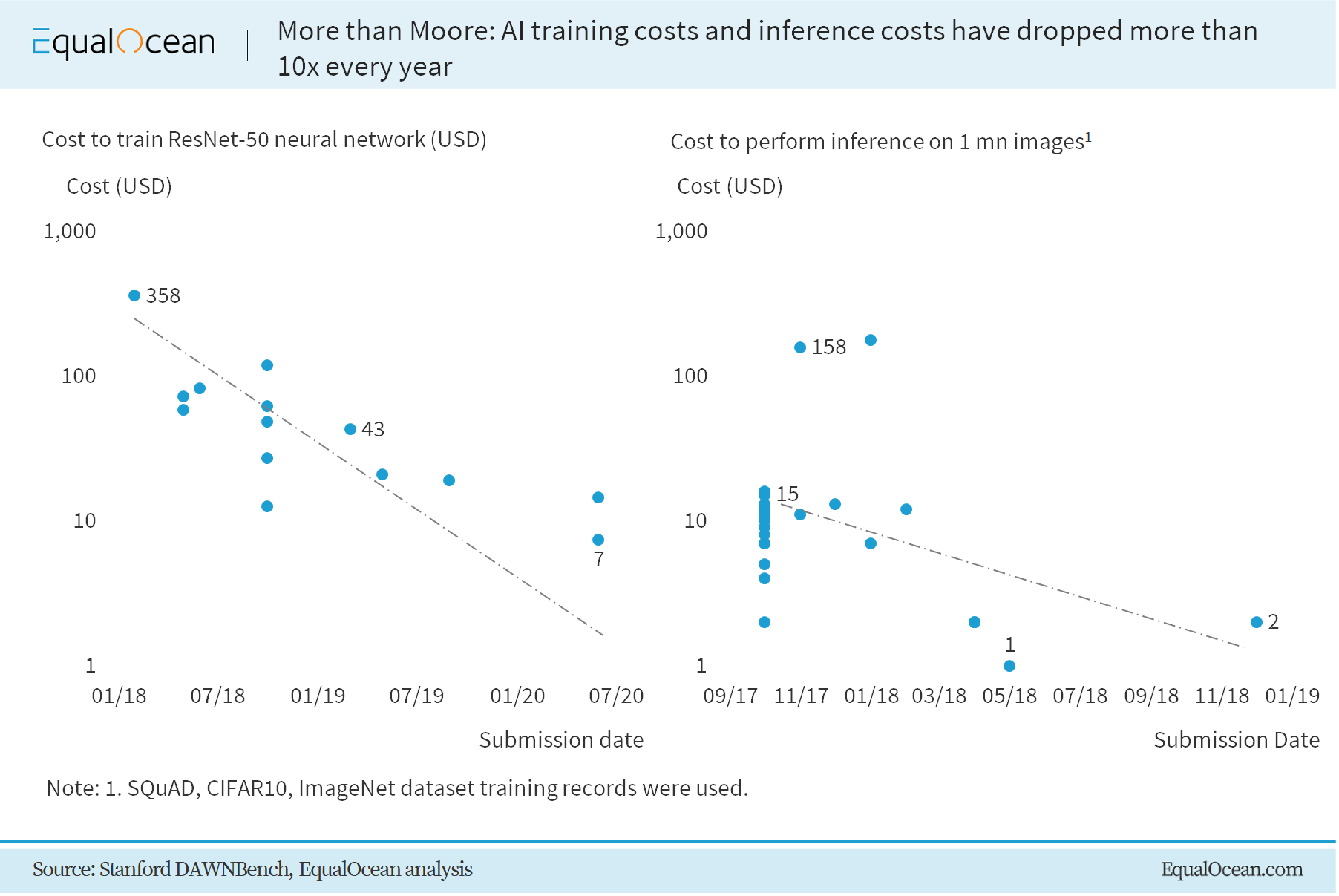 AI companies have been improving computing ability at five times the rate of Moore’s law. No wonder there is a massive hype around AI research and funding activities. But in practice, we found that AI businesses have limits in how their value can be built up and accessed, rented or sold – they are not like those 'builds once / sell many times' software model. It adds pressure to margins, as well as defensibilities.

This article is part I of our analysis on Megvii. Please continue to part II.