Yunnan Baiyao: An Oriental Mystery in the Limelight (1/2)

Tagged as ‘China’s Time-honored Brand,’ Traditional Chinese Medicine (TCM) company Yunnan Baiyao (000538:SZ) has come to an unprecedented crossroads after fulfilling the challenge of pushing TCM to the foreground.

► From an ROE perspective, the TCM is staged into four phases with analysis into a period from 2000 to 2009.

This is the first chapter of EqualOcean’s ‘two-parter’ about Yunnan Baiyao. Click here to read the following article.

Peter Lynch suggests investors seek ‘ten-bagger’ stocks from daily life, from the supermarket near your neighborhood, from the posters in the public parks. Indeed, to achieve a 10x growth for a company,  one great dynamic comes from a sprawling consumer market coverage, or simply market popularity.

Yunnan Baiyao (云南白药), a Kunming-based TCM company, is the first-ever ten-bagger at A-share market – or, showing even more ambition, 150-bagger in the 23 years since its first listing. More than a pharmaceutical brand, it has entered into cosmetics, providing toothpaste, facial masks, etc. that nearly every Chinese consumer is well familiar with. 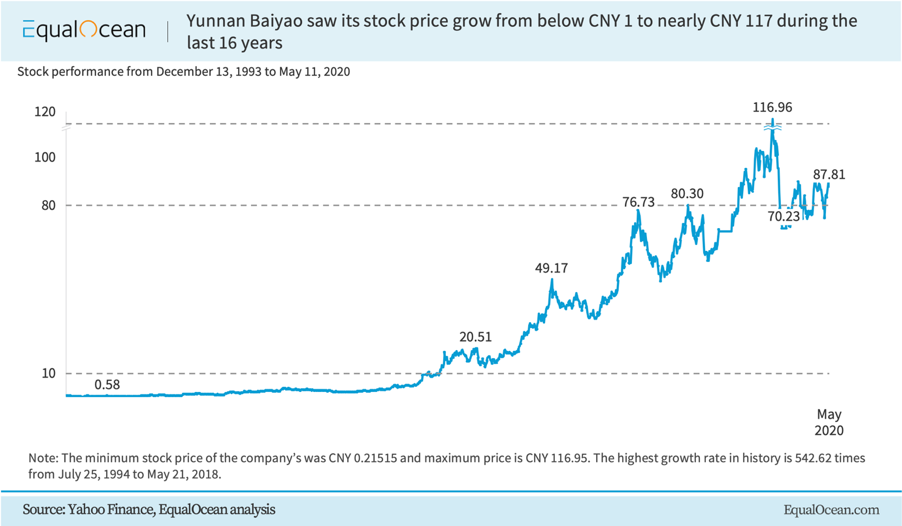 However, even though the zigzag path over two decades has not all been very smooth, the long-term upward trend can indicate its fundamental value or the core competency in the TCM industry. Very different from western medication, Chinese medicine views a person as ‘one skin’ – the human body is interconnected to mobilize blood flow.

Traditional Chinese medicine enjoys a history of over 3,500 years, traceable to the Yellow Emperor and Shennong, who are jointly considered as the originators of Chinese medicinal theories. As a branch of Chinese medical practices, this herbal medicine stream has been popular within the Sinosphere and built quite a large fan base in the western world, carrying with it the inherent Chinese ancient binary wisdom embodied in ‘yin’ and ‘yang.’

As this concept acquires more acceptance in the west, a pretty sophisticated Chinese medicine market has arisen, with a comprehensive classification of medicine products and mature distribution networks from herbal provenance to the end consumer and an industrial landscape with qualified brand players: Yunnan Baiyao, Tong Ren Tang (600085:SH) and Tasly (600535:SH).

As one of the flagships in the TCM pharmaceutical world, Yunnan Baiyao has been selling a brand, a historical brand whose value appreciates as time goes by.

Yunnan Baiyao, or Yunnan White Drug, is a kind of hemostatic, anti-inflammatory medicine mainly comprised of tienqi ginseng (Panax pseudo-ginseng). The inventor of Baiyao, Dr. Qu Huanzhang, donated loads of this drug during the Taierzhuang Battle (‘台儿庄战役’), an anti-Japanese campaign during the second world war, saving hundreds of soldiers’ lives. Dr. Qu was subjected to house arrest after refusing to give up Baiyao’s formula. Several years afterward, the patriotic doctor died in anger; his medicine was protected as a national strategic resource and played an important role in the resistance war against the American army in Korea.

There are over 10 thousand Chinese medicines, but only two are listed as national-level super-confidential formulas: Yunnan Baiyao and Pientzehuang.

Undoubtedly, this kind of absolute exclusivity has laid a solid foundation for this particular White Drug’s market value, adding an additional flavor of mystery. Not confined to just this advantageous source of profit, this Kunming-based medicine maker eyes even further goals than working with this single formula. It has developed many other businesses and formed four primary revenue sources along its value chain. 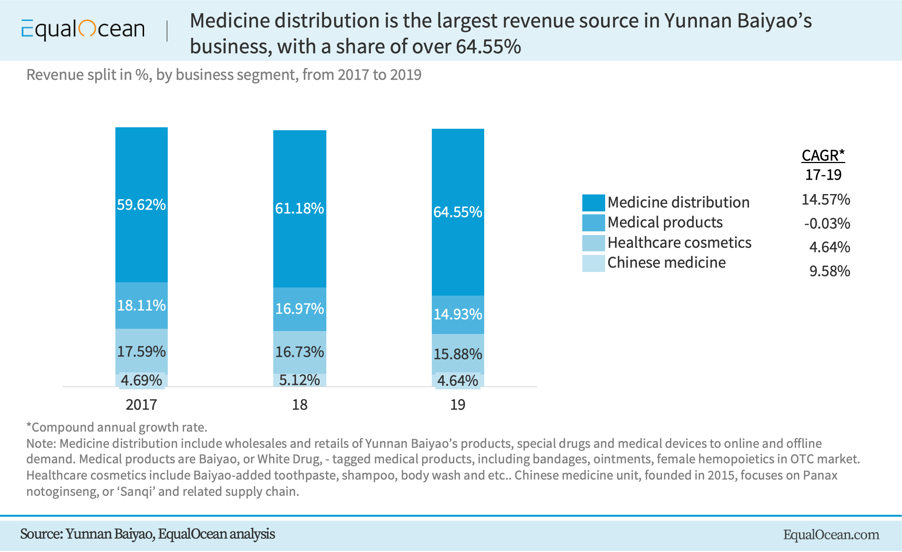 Year after year, what has been getting more valuable, along with its increasing revenues and market expansion, is its brand value.

BrandZ™’s 2019 Most Valuable Chinese Brands Top 100 ranks Yunnan Baiyao 45th, the top name in the healthcare industry, at a brand value of USD 2.88 billion. Interbrand, an international consultancy, published ‘2019 Best Chinese Brands,’ giving White Drug an estimated CNY 7.43 billion (USD 1.05 billion) brand value at 34th, still number one in healthcare. In the same year, given a brand value of CNY 25.5 billion (USD 3.59 billion), it ranked 66th on the 2019 Hurun Brand List. As of May 15, the market valued this Chinese TCM representative at CNY 112.283 billion (USD 15.81 billion).

Despite being similarly under the protection of a national umbrella, the other leading brand, Pientzehaung, has not enjoyed such a global reputation. It was also ranked on the 2019 Hurun Brand list (Healthcare), with a brand value of CNY 14.5 billion (USD 2.04 billion), after Yunnan Baiyao.

What makes the White Drug stand out among its peers is not only paper protection but also its internal operation and business strategies – two other factors that together form the value proposition.

More practical than just a concept

From a fundamental perspective, this time-honored pharmaceutical brand’s history in the 21st century can be divided into four phases, as indicated by the ROE (return on equity) paths and related constituent indicators. 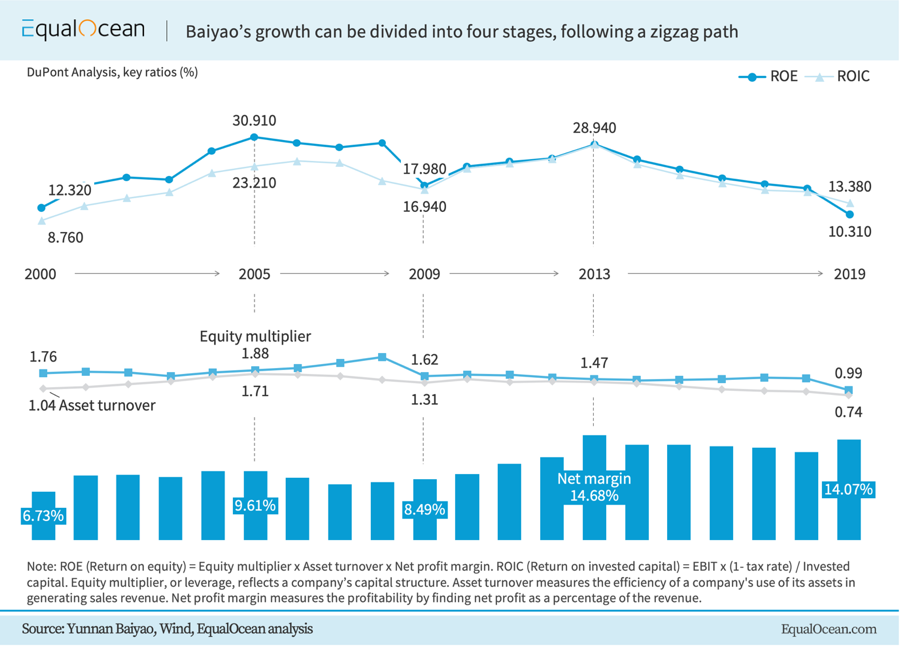 Into the new century, this TCM showed an upward trend in operation efficiency and profitability. During these six years, its ROE ratio increased to 30.82%, nearly 2.4 times the initial 12.84% in 2000. 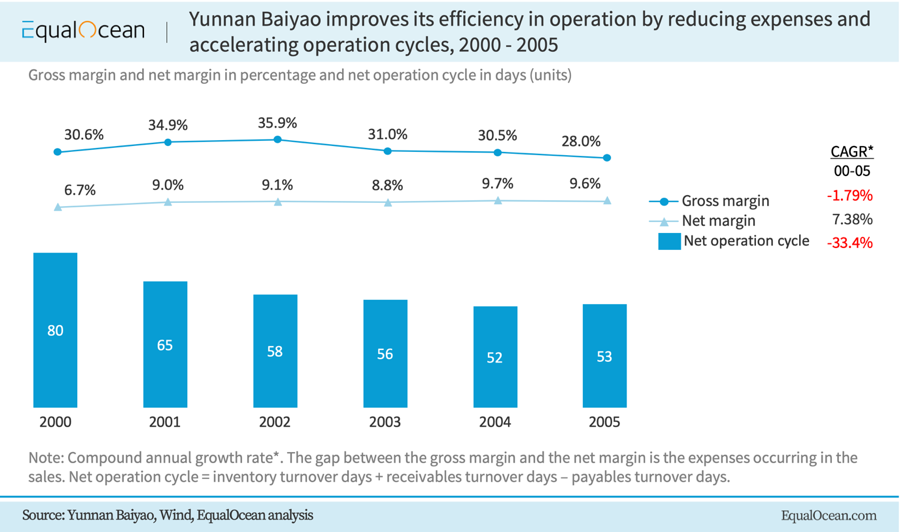 The last year of the 20th century witnessed this Chinese medicine company take a new CEO on board, Mr. Wang Minghui, who implemented an internal entrepreneurial sales mechanism – a ‘knockout or bonus’ incentive and promoted a more aggressive marketing strategy. A direct result is an obvious decrease in the administration and selling expenses, from 18.42% and 16.74% in 1999 to 12.78% and 5.04% in 2006.

The other credible change during this time lies in asset utilization. After its production department adopted an ‘internal order system’  – an order-oriented ERP system – this company had seen a prominent advantage in its inventory turnover among its peers. From 2001 to 2005, it had an average inventory turnover of 3.8x (from 3.09x to 4.11x), compared to Pientzehuang’s 1.0x (from 0.84x to 1.92x) and Tong Ren Tang’s 1.21 (from 1.35x to 1.09x) during the same time.

Moreover, from the perspective of the net operation cycle, it also showed high efficiency in capital turnover, indicating its relatively stronger power over its upstream suppliers and downstream distributors. It had an operation cycle of 104.74 days, almost half of Pienzehuang’s 187.85 days in 2005 or one-third of Tong Ren Tang’s 330.73 days, according to the Wind.

These three years saw a continued downward correction in ROE and ROIC. The apparent divergence between these two ratios shows a growing equity multiplier – a rate reflecting the status of debts relative to the equity.

This sudden change can be traced back to its new business strategy in 2000, the initial year when this herbal medical-centered pharmaceutical brand started to enter cosmetics. Following that, in 2001 and 2003, the ambitious medical player launched Baiyao bandage and Baiyao toothpaste. Its bandages highlighted Baiyao’s hemostatic function, aggressively challenging Johnson & Johnson Band-Aid’s 50% market share. Its toothpaste showed no weakness either, with an additional feature of anti-inflammation, at a retail price of CNY 20, 33.3% higher than the price of foreign peers.

As a new entrant just into this new market, Yunnan Baiyao sought fast and effective moves. It cannibalized its profits to expand sales, resulting in an increased amount payable to downstream distributors and higher selling expenses afterward. 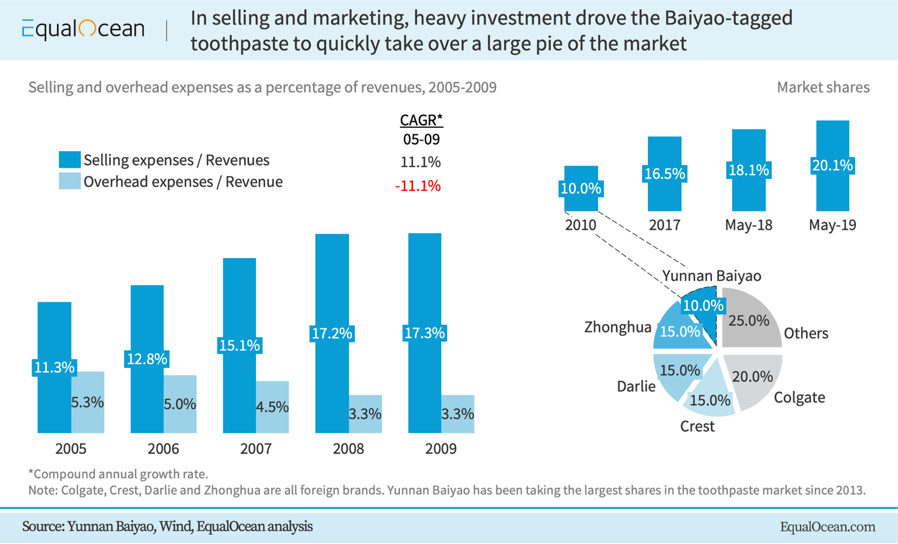 The marketing strategy for these two cosmetic products further cemented the prestigious status of the brand. Along with a sprawling sales network in capital cities, the year of 2007 saw an explosive boost in sales of Baiyao toothpaste. And more than that. It invested in advertising promotions, establishing a lively and modern image, and cultivating a large pool of young consumers.