In the wild world of Chinese online retail, the ‘scale at all costs’ strategy is no longer meaningful – rather, nuance and efficiency are coming to the fore. 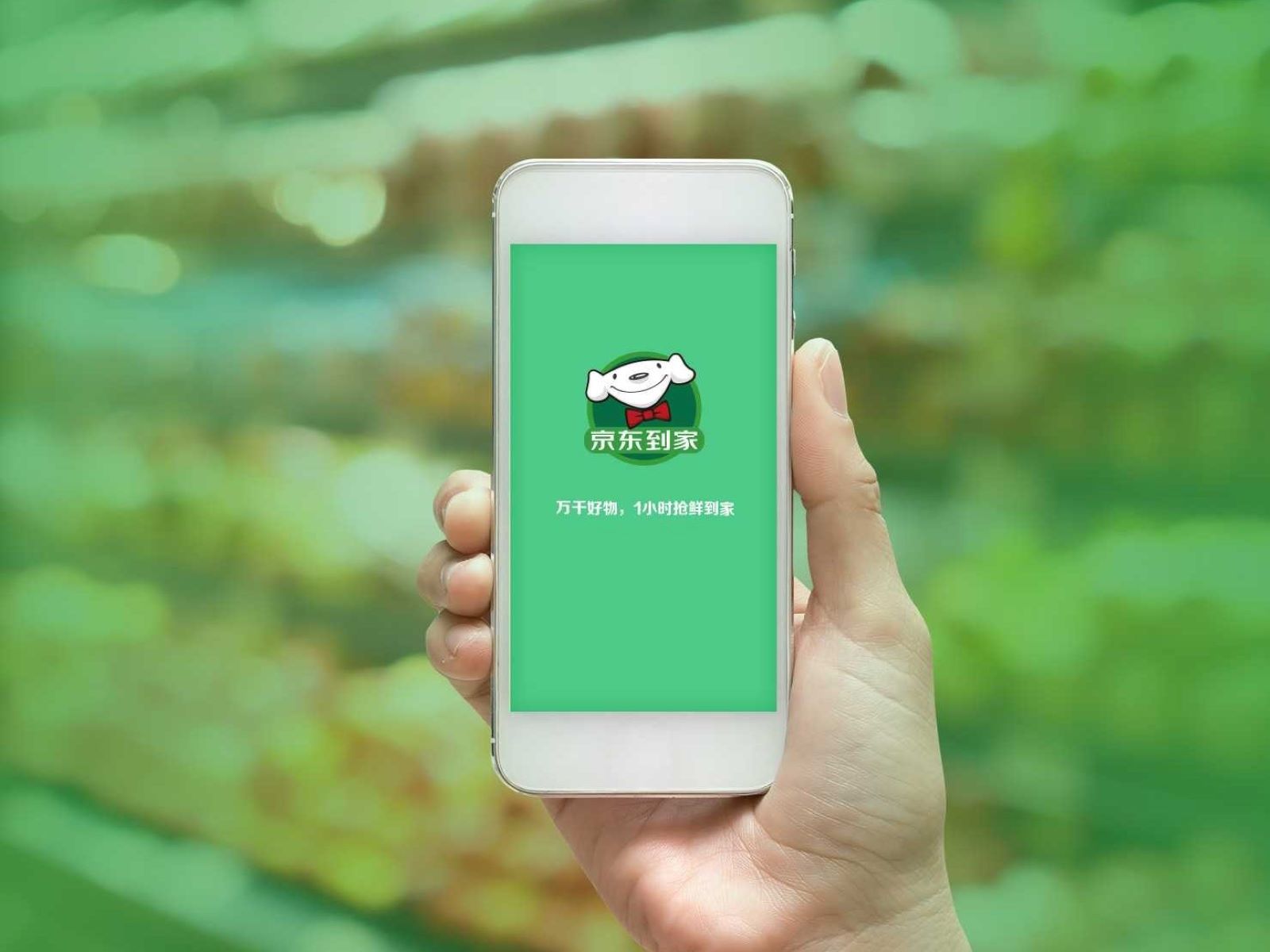 Shanghai-based Dada Nexus operates two businesses: Dada Now – a local on-demand delivery platform – and JDDJ (aka JD Daojia, JD(JD)'s subsidiary), an online on-demand retail platform. Riding on the wave of new retail, drawing on the synergy created by the combination of online operators and offline retailers, Dada Nexus has applied for an IPO in mid-May.

►The continuous rise of new retail and e-commerce has contributed to a growing demand for platforms like Dada Nexus.

►Dada Nexus shoulders heavy fulfillment costs, including warehouses and riders. Operations and support represented 88% of revenue in 1Q20. These large variable costs are hard to resolve, even when leveraging the economics of scale.

►JDDJ’s pure marketplace model adds limited value to supply chain integration – and the take rate tells the story (3.3% in 1Q20). The merger of JDDJ and Dada Now in 2016 created some cost synergies; however, it didn’t solve the key problem of JDDJ acting as a pure marketplace. 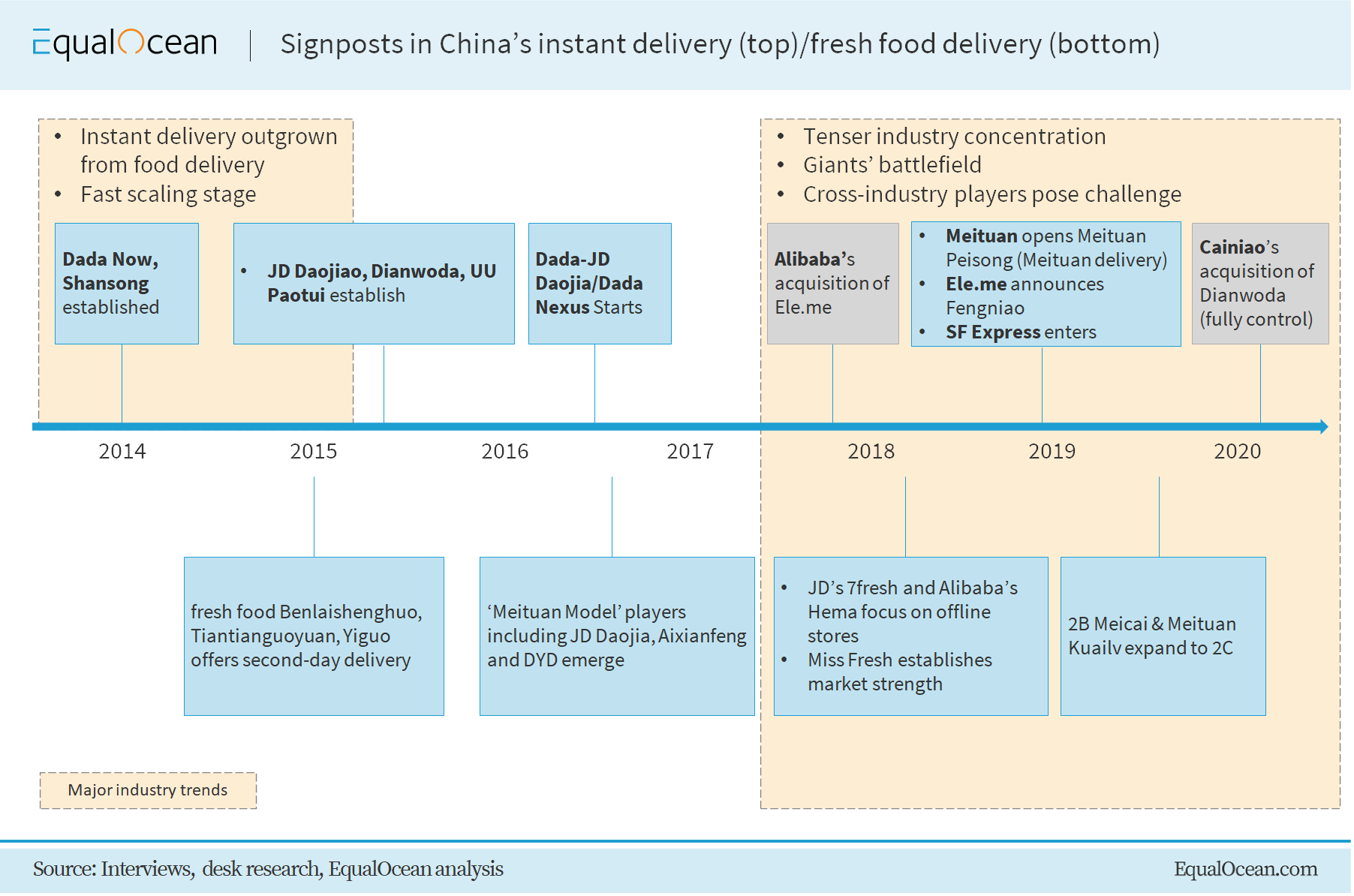 During 2014 and 2015, China experienced the first stage of mature development in online food delivery. Major players such as Yiguo and Tiantianguoyuan began to offer customers a second-day delivery experience, and some even operated 2B services. However, these players were entering a space where Alibaba and JD had an advantage; the category-specific ‘JDs’ were unable to provide customers with enough so-called ‘wow’ moments.

Moving into 2016 and 2017, marketplace players emerged by connecting offline stores with delivery services. ‘Ubers for everything’ attracted CNY 12 billion in 2016. Within one year, the industry saw a batch of failures. A study shows that at least 14 fresh food delivery platforms were bankrupted in 2017. Supported by JD’s vast flows of goods, JD Daojia has scaled fast and became the largest instant food delivery platform in 2019.

In 2018 and 2019, we saw a new trend lighting the way ahead – the platform model was no longer popular. Retailers began to shape the future, represented by Alibaba’s Freshippo (Hema), JD’s 7fresh and Miss Fresh. The offline stores/warehouses save multi-layer logistics costs and are bringing fast delivery to customers.

The ‘instant delivery’ service was an outgrowth of standard food delivery and experienced its fast scaling stage back in 2014. Industry reshuffles began in 2018: Dianwoda, which once had 3 million riders, saw Alibaba come in with a CNY 290 million strategic investment. Along with the joining of express leader SF, large Internet platforms (Alibaba and Meituan) established their edge. The top three players controlled ~25% market share in the third quarter of 2019 (that being said, ~75% CR3).

Margins not the priority

Whether for take-out or grocery deliveries, e-commerce giants have strategically positioned themselves as important gateways for online traffic, due to both the nature of the products they sell and how the goods are transported. Margins may not be a top priority at this stage, as the Dada Nexus prospectus demonstrates. 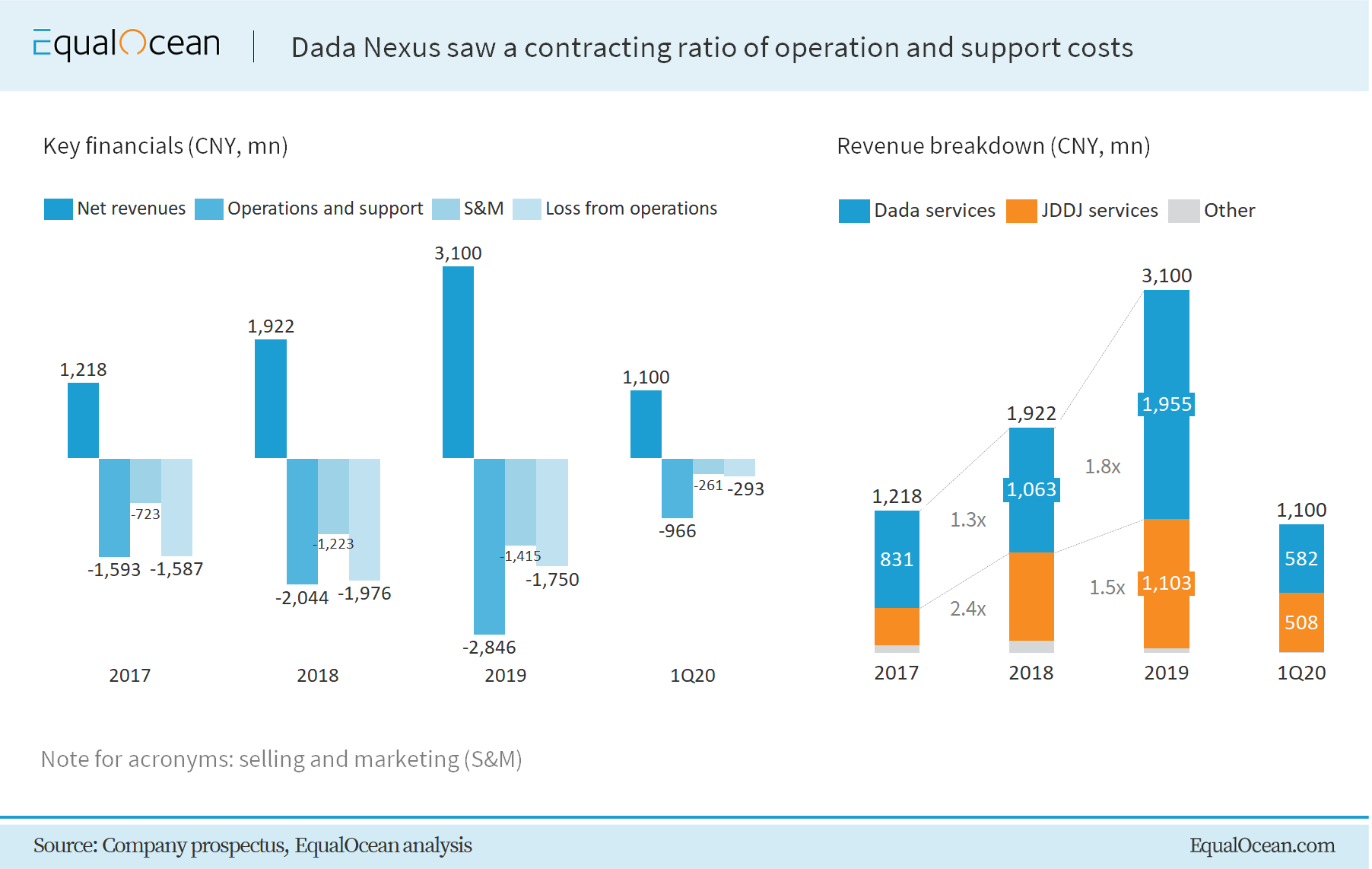 Dada Nexus almost tripled revenues from 2017 to 2019, widening losses from operation from CNY 1.6 billion in 2017 to CNY 1.8 billion in 2019. JDDJ experienced a lower sales growth in 2019 compared to Dada Now, however, eyeing the fallout of the pandemic, we expect the business will enjoy a faster expansion through the rest of the year. This can be attributed to two factors: 1. Greater online market penetration (esp. older users) and 2. JD’s ability to retain these customers thanks to a stable supply chain. During the post-coronavirus period, China’s fresh food delivery firms will likely see reductions in profits due to a sharp decrease of customers, the tally of which ballooned during the crisis. The winners at this stage will inevitably face a new challenge – to retain the customers they have newly acquired, possibly by expanding SKUs from the current 1,000 to 100,000.

Operations and support represented 88% of expenses in 1Q20, a decrease from 131% in 2017. Within the operations and support cost breakdown, rider costs form the largest component (~90%). Sales and marketing (S&M) expense efficiency has been improving, as the ratio of S&M over revenue has dropped to 24% in 1Q20 from 59% in 2017.

Retailers or marketplace? It’s all about the efficiency 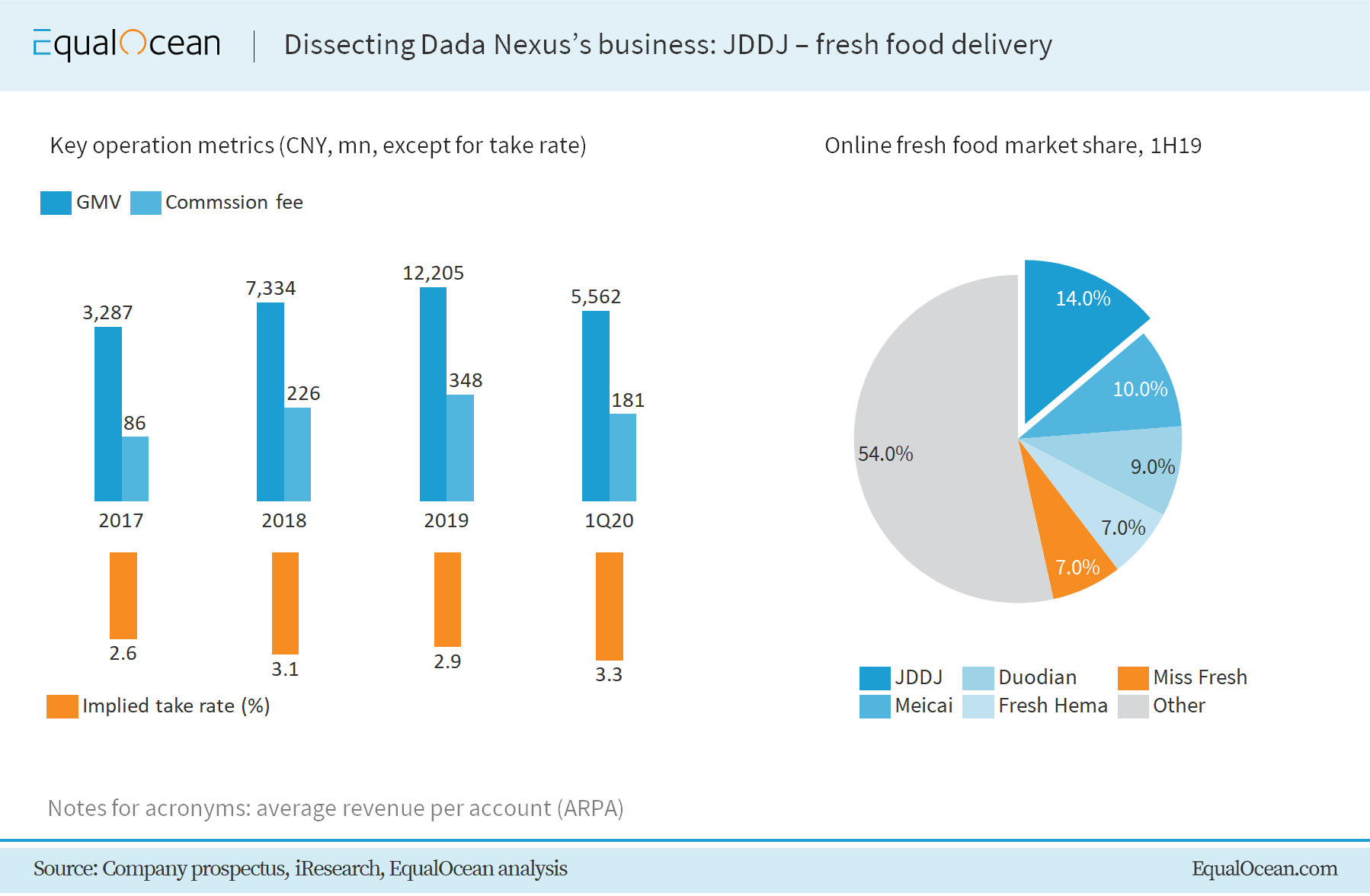 Despite these promising figures, in our view JDDJ’s pure marketplace model adds limited value to supply chain integration. The take rate tells the story: despite an increase from 2.6% in 2017 to 3.3% in 1Q20, the upper limit sitting at 5% considering how much the commercials can afford (retailers make <50% gross margin). But the delivery cost usually ranges from 5% to 10%. JDDJ does not disclose numbers for delivery costs, but this may still represent over 10%, considering its high operation and support expenses (incl. Dada Now).

The online grocery market is still in an immature stage, and the supply chain integration / omnichannel infrastructure is important. JDDJ is yet to prove its value by increasing supply chain efficiency.

Dada Now provides last-mile delivery and intra-city delivery services to logistics firms (for example, JD Logistics), chain merchants (for example, Yonghui and Walmart) and SMEs. In the instant delivery market, 52%, 22% and 15% of orders come from take-out, retail goods and fresh fruits & vegetables respectively, according to BigData (in Chinese). Dada has been actively cooperating with supermarkets, hypermarkets and convenience stores to expand its business to warehouses and last-mile delivery, alongside expanding its categories and coverage. 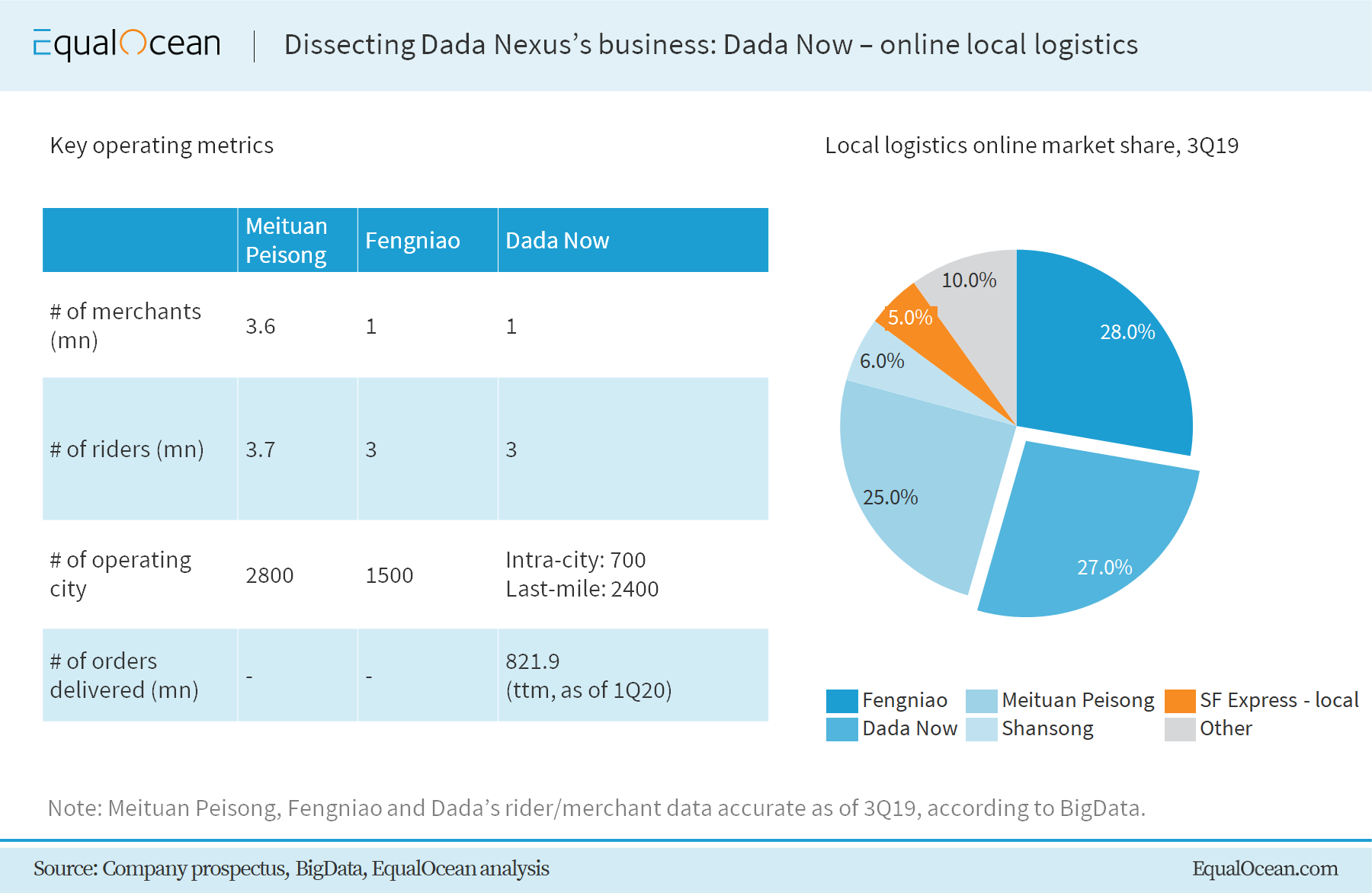 Logistics usually follows the flow of goods. JD, the second largest e-commerce giant, naturally has an advantage in bringing in orders. For instance, during the peak of certain shopping festivals (6.18 & 11.11, China’s answer to Black Friday), Dada Now delivers parcels for JD.com. JD Group generated 37.8% of Dada Nexus’ revenues in 1Q20, dropping from 56.7% in 2017, as Dada Nexus expanded the number of merchants and categories on both its Dada Now and JDDJ platforms.

The same logic can be applied to Alibaba and Meituan. Tech giants are building their digital infrastructure, expanding their business scope and competing to capture new opportunities in the battlefield coined “new retail”. Tencent, however, is playing passively at this stage and focusing on refining its edge through its connectivity strengths. WeChat, along with its mini-program ecosystem, has been providing traffic/digital assets for Meituan, Dada Nexus and many other small players.

The improvement of algorithms has been bringing true benefits to Meituan in terms of marketplace + capacity model. Meituan has successfully improved its on-demand food delivery gross margin to 18.7% from 8.1% over the past three years, without significantly lifting commission fees (only 0.7%), due in part to its digitalized rider management system.

We believe the way Dada Nexus is heading requires deeper integration – one that moves along through the value chain to the upstream. Merchant operating systems, for instance, also an area where Meituan is aiming, help merchants on inventory, orders, distribution and consumer data/insights.

The barriers to profitability are mainly: 1) high fulfillment cost in the last-mile delivery market, 2) fiercer competition leading to higher CACs, 3) industry margins to remain under pressure as Internet giants can monetize from other categories.