The firm once gained success with its then-pioneering micro-innovations and localized marketing strategies. Over the past few years, however, its story has turned somewhat bleak.

► vivo has been attracting only limited attention – yet it has been building its smartphone empire quite well.
► Cutting-edge technologies, supply chain management and heavy marketing investment are the three pillars of vivo’s core business.
► The firm is trying to get ready for the new wave of competition being stirred up by the arrival of 5G.

Founded in 2009, vivo has made headway through innovations in its value chain, notably design, supply and sales. First concentrated on China’s domestic market, vivo tripled its market share from 2015 to 2018. The most significant growth happened in 2017, the exact time when it showed its standout innovations in design and marketing. However, since 2018 vivo has been sloping downward due to fierce competition and market shrinkage.

Because of limited R&D capacity, vivo started to focus on the middle and low ends, resorting to heavy offline advertisement and sales channels constructions. Though there was no significant growth from 2018 to 2019, vivo maintained its position as a Chinese top 5 smartphone vendor – rather than ending up bankrupt like Gionee, which once had the glory of taking the biggest share in the Indian smartphone market in 2015, before going bust.

Unlike Xiaomi, which was built from zero, vivo originally belonged to BBK electronics, which operated electronic gaming and telephones in the 1990s. vivo began to run its business separately from BBK Electronics in 2009, but as we can see in the equity tree, it is still 100% held by the BBK group. Notably, iQoo, which itself claims to be a powerful high-tech smartphone brand, belongs to the vivo group. 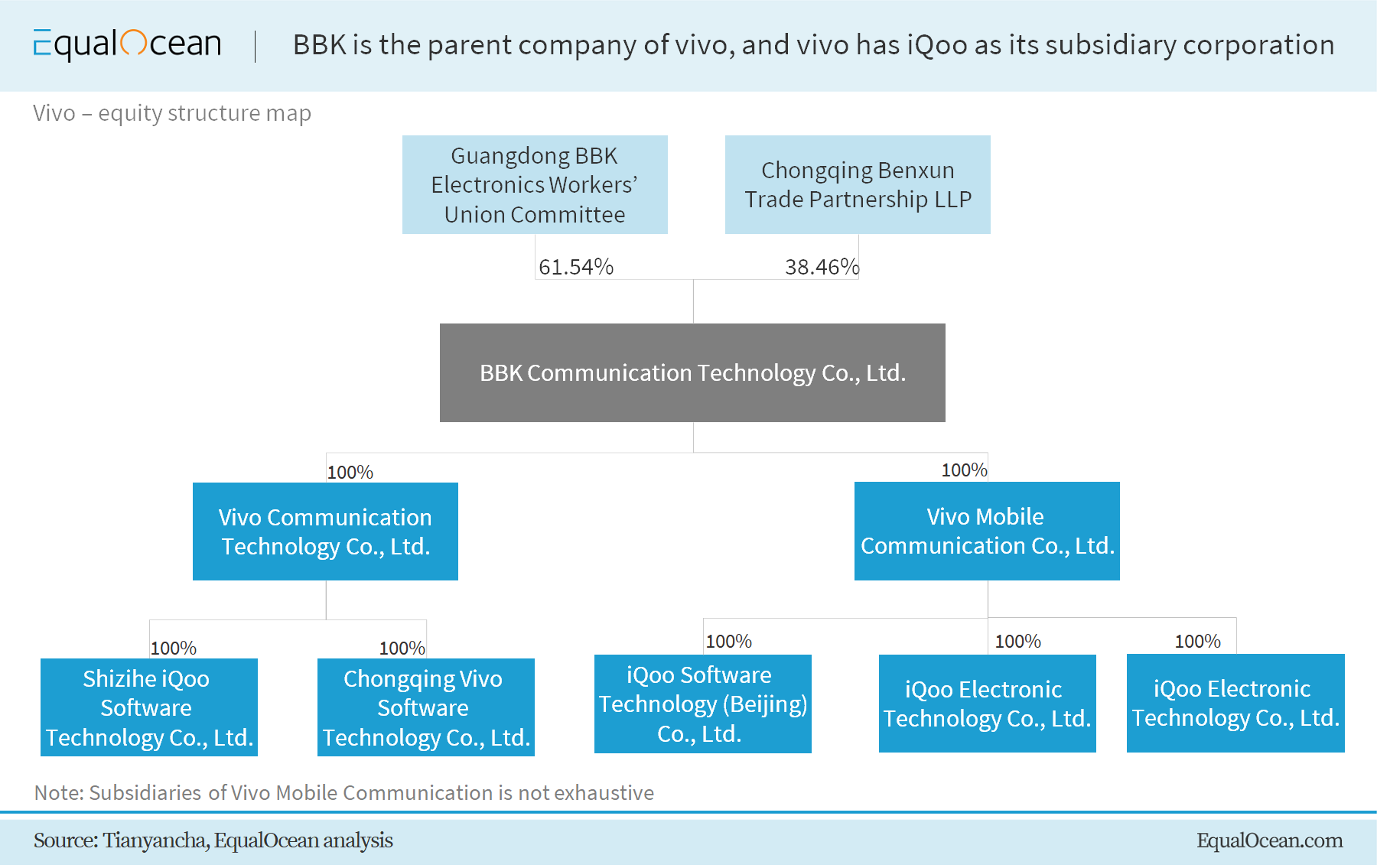 Though China’s domestic market has failed to mark vivo as a winner in recent years, the company began to show its power in the global smartphone market. If we consider the global market as a whole, vivo has gained a stable market share – from 7% to 9% in terms of shipments. However, there has been a lift in its overseas shipments and a downturn in domestic shipments as the market is shrinking.

In Indonesia, vivo became the market leader for the first time in the first quarter of 2020, by focusing on its marketing campaigns, including various promotional campaigns for its low-end and mid-range smartphones.

India also embraces vivo – the n.2 brand there – with a strong year-on-year growth of 63.3% in the first quarter of 2020. The rise in emerging markets is a reflection of how vivo succeeded in China’s domestic market. This means heavy investments and deep localization in marketing activities. To open the Indian market, vivo paid CNY 2 billion for the naming rights of the IPL (Indian Premier League). Making Aamir Khan, a famous Bollywood movie star, the Indian ambassador, was another heavy investment – but an effective move to promote sales. Besides, vivo has covered over 600 cities in China with around 250,000 sales outlets, and has been expanding the offline channels in overseas markets as well. India vivo continued to lead the offline channel for two straight quarters with a 29.8% share. Continuous returns can be reasonably expected from investments in factories and sales channels; thus it is likely that vivo will keep driving its volume in overseas markets for the next 2 to 3 years.

Every tech firm emphasizes technology. vivo is the one that has proven that commitment with several ‘firsts.’ In September 2017, the iPhone X hit the smartphone market with its ‘full screen’ and ‘Face ID’ capacity and a historic high price of USD 999. This change in how screens present content and how people interact with their devices triggered the interests of Chinese consumers and drove market share up by 5%. However, vivo won back the market share that was taken by the iPhone X in the following quarter by doing the same, namely bringing out an entirely new way of using smartphones by releasing a flagship with an under-screen fingerprint. Instead of replacing the ‘Home button’ with ‘Face ID,’ an easier way to unlock the phone was ushered in – and the screen remained as large as that of the iPhone X.

The next possible technology that can be expected from vivo is the under-screen front-facing camera, which could even allow for a larger screen proportion than any type that exists in the market right now.

If smartphone screens affect the user's experience most, then cameras come next. vivo recently presented an exclusive intellectual property related to the ‘micro pan-and-tilt camera’ (‘微云台’), which could help with stability when shooting videos. With 5G, short videos and live streaming have already shown themselves as the dominant trend. Users who shoot short videos with smartphones will likely increase significantly. As the first vendor to add features aligning with the speed of 5G, vivo showed proactive R&D – this could possibly allow it to break out of its non-growth market share in China.

For real-economy sectors like the smartphone industry, the way to manage the supply chain is one of the most significant performance determinants. vivo presents a good case in terms of supply chain management. Unlike many other Chinese smartphone vendors, vivo insists on leading technical evolution instead of being led by suppliers’ ideas, which are often based merely on manufacturing perspectives. For example, vivo co-designed the under-screen fingerprint technology with its supplier Goodix Technology (in Chinese). As well as being an ‘idea supplier’ for its upstream companies, the company tries to build more integrated relationships along the supply chain through more profit sharing. Since the internal R&D capacity cannot compete with Huawei, and Samsung’s acquisition mode is not applicable as well, the profit-sharing model should prove efficient for the short term.

1. vivo has been preparing for the 5G era since 2016. With 5G communication officially becoming accessible for the mass market in 2019, the pre-investment related to 5G technologies is likely to show its influence. 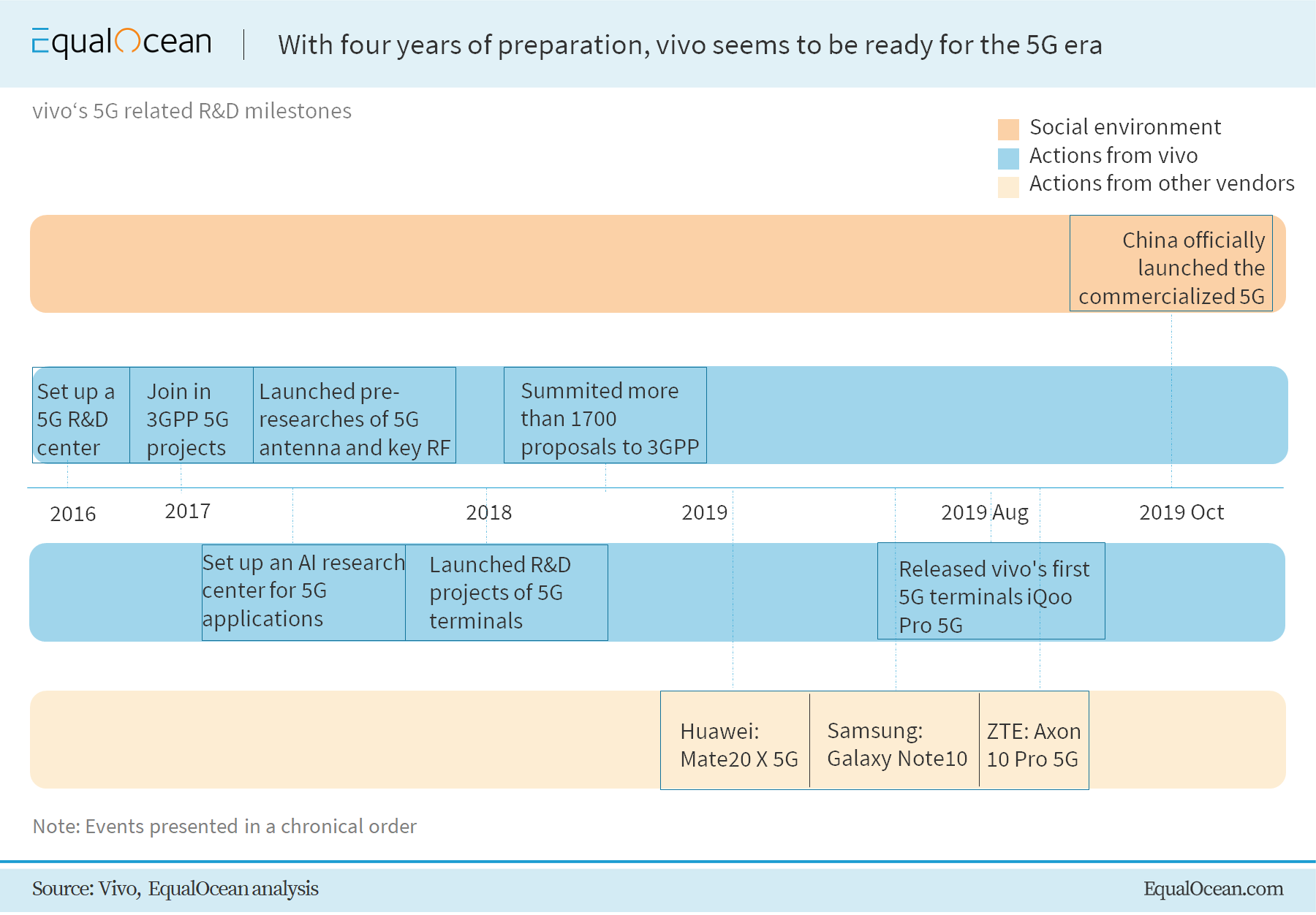 2. As previously mentioned, features that are accommodated to 5G speed will be in huge demand and vivo gives every appearance of being ready, with over 2,000 5G related patents in hand.

3. Further overseas expansion – since R&D costs can be considered as a kind of fixed cost, geographic expansion seems to be an effective measure to realize the economy of scale. Though having leading positions in India and Indonesia, vivo is quite likely to make more effort in competing with Huawei and Xiaomi in the European market. Because of Huawei’s conflict with the US government, Huawei’s European market share will shrink if customers there can no longer use Google apps on Huawei devices, and that would be a chance for vivo and Xiaomi to take the share of the price-conscious customers.

4. The price range remains the same – or is even lower for 5G devices. Previously vivo covered almost the same price range as Xiaomi’s, however from now on vivo may compete with Xiaomi through lower-priced 5G devices. Besides competition, the decreasing price of 5G chips due to there being less demand since the first quarter of this year will also bring a structural price decrease in 5G smartphones. 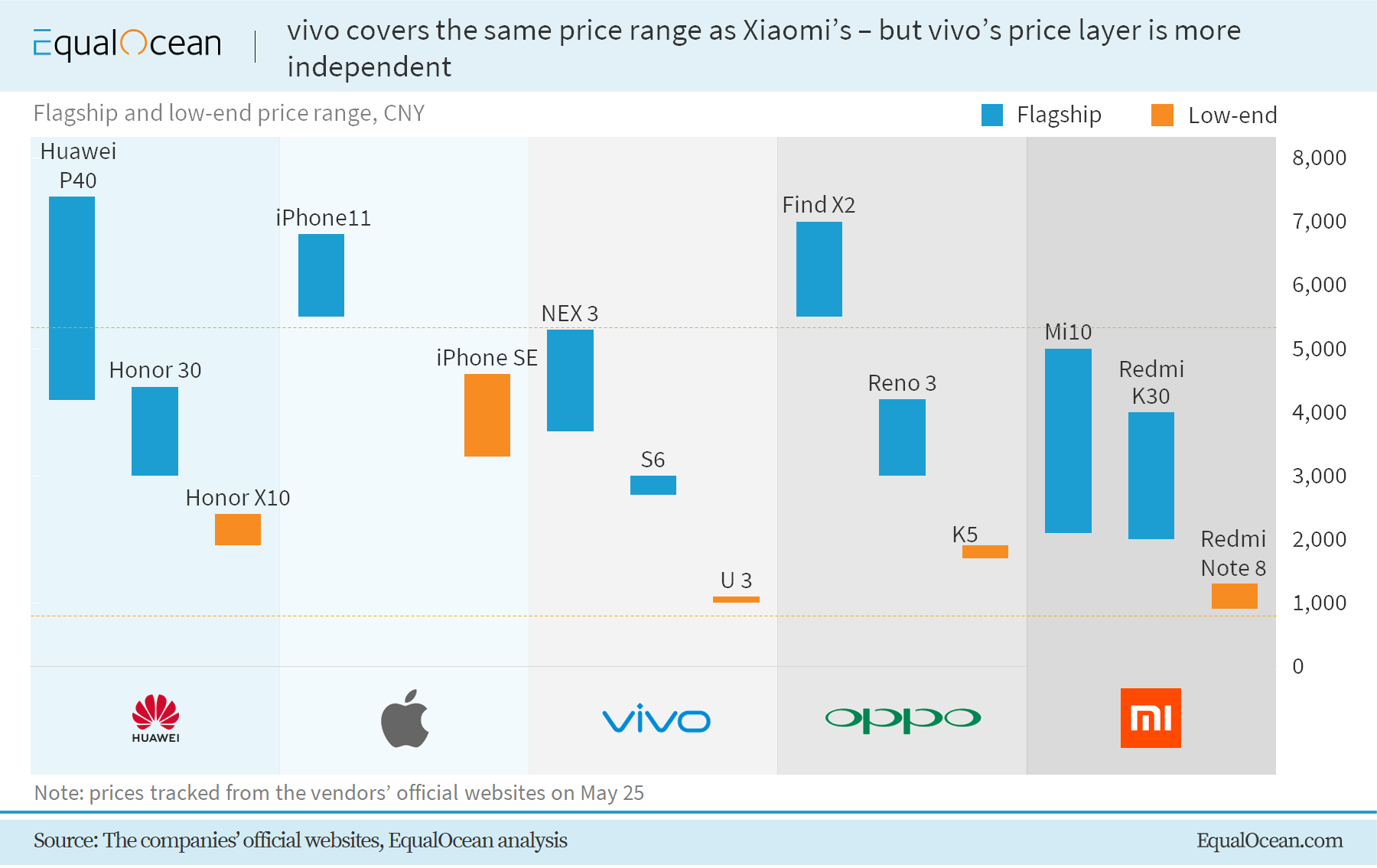 5. Following our projection, in the case of an IPO, the valuation of vivo is likely to be higher than that of Xiaomi. Many factors contribute to determining market value. Among them, profitability should be one of the most important. According to counterpoint research, in 2019 vivo surpassed Xiaomi in operating profit share by around 5%, while in terms of total shipments Xiaomi failed to surpass vivo by that much.

CONTACT US
Scan QR code to contact us for professional consulting services
Next article
Topchoice Medical: Is One Hospital Chain Propping Up this Rising Listed Company?