A Glimpse at China’s Fresh Retail Market Through Yipin Fresh

How is the company catching up with the stiff competition in the industry? 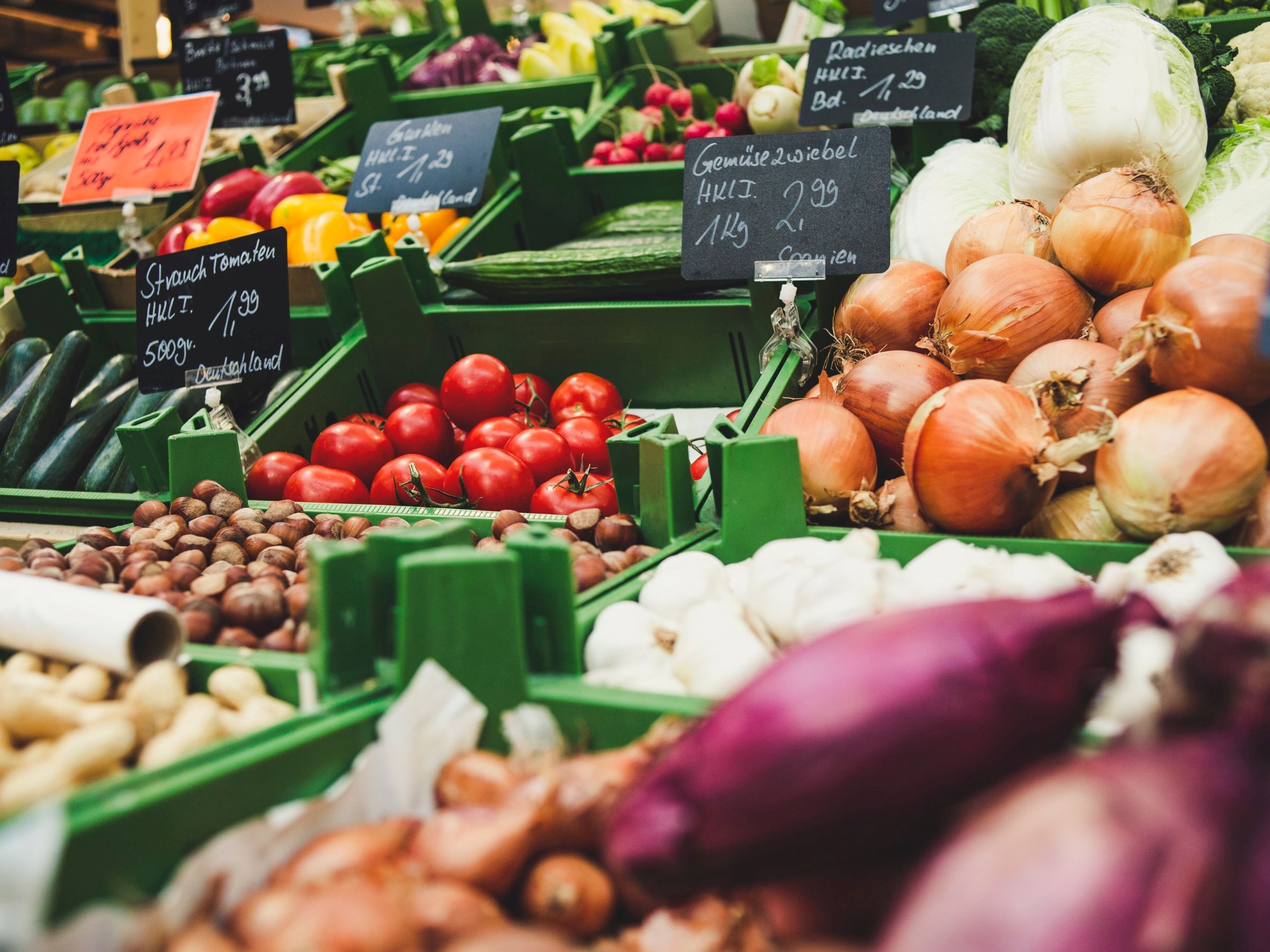 ► Daily order volume during the epidemic was more than 100,000, which was double compared with the previous year.
► The vertical supply chain and partner model are crucial elements of survival in the competition.

After the mad investment of capital in the past few years and the successive fall of startups, the fresh food retail industry has now entered a stage of fierce competition. All players are improving efficiency and proving that their business model can be profitable. According to statistics (in Chinese), the scale of the China fresh food retail market in 2020 can exceed CNY 5 trillion (USD 700 billion).

Benefiting from the epidemic at the beginning of this year, companies that survived in 2019 ushered in a turning point. During the Spring Festival, JD Daojia's (Daojia means ‘arriving at your home’) total platform sales increased (in Chinese) by 540% year-on-year. The number of transactions received on the MissFresh platform increased by 321% compared with the same period last year.

The growth was quite impressive. The same is true for Yipin Fresh. The company claimed that the daily order volume during the epidemic was more than 100,000, which doubled compared with the previous year. At this point, Jiang Jianfei, founder of Yipin Fresh, chose to step on the accelerator to start sprinting. In March, he said that 2020 is an excellent time to expand, and Yipin plans to open 650 new stores during the year.

What locks the ‘fresh’ price?

Since fresh retail is not a new story, its profit model is pretty clear and can be simplified as a formula: [ gross profit = number of orders * price per order * gross margin - operating expense]. Except for the products’ price is the main factor, the cost for reaching more clients is also related. As a low-profile player in the industry, Yipin Fresh positioned itself as a discount community fresh retailer. So how to lower the cost becomes vital, it's vertical supply chain and partner model take the role.

The direct purchase of Yipin is different from the traditional one. Typically, retail stores only buy good-quality goods, but the prices of good-quality products are not low. The direct purchase of Yipin Fresh is to complete the turnkey purchase from the place of origin and then complete the distribution at the wholesale end. For different grades and standards, distribute to various channels according to different grades: put it in good condition and sell it in the store, and sell it in the rest through the B2B wholesale business. Besides direct purchase, Yipin also owns the breeding base and planting base to replace traditional upstream suppliers. 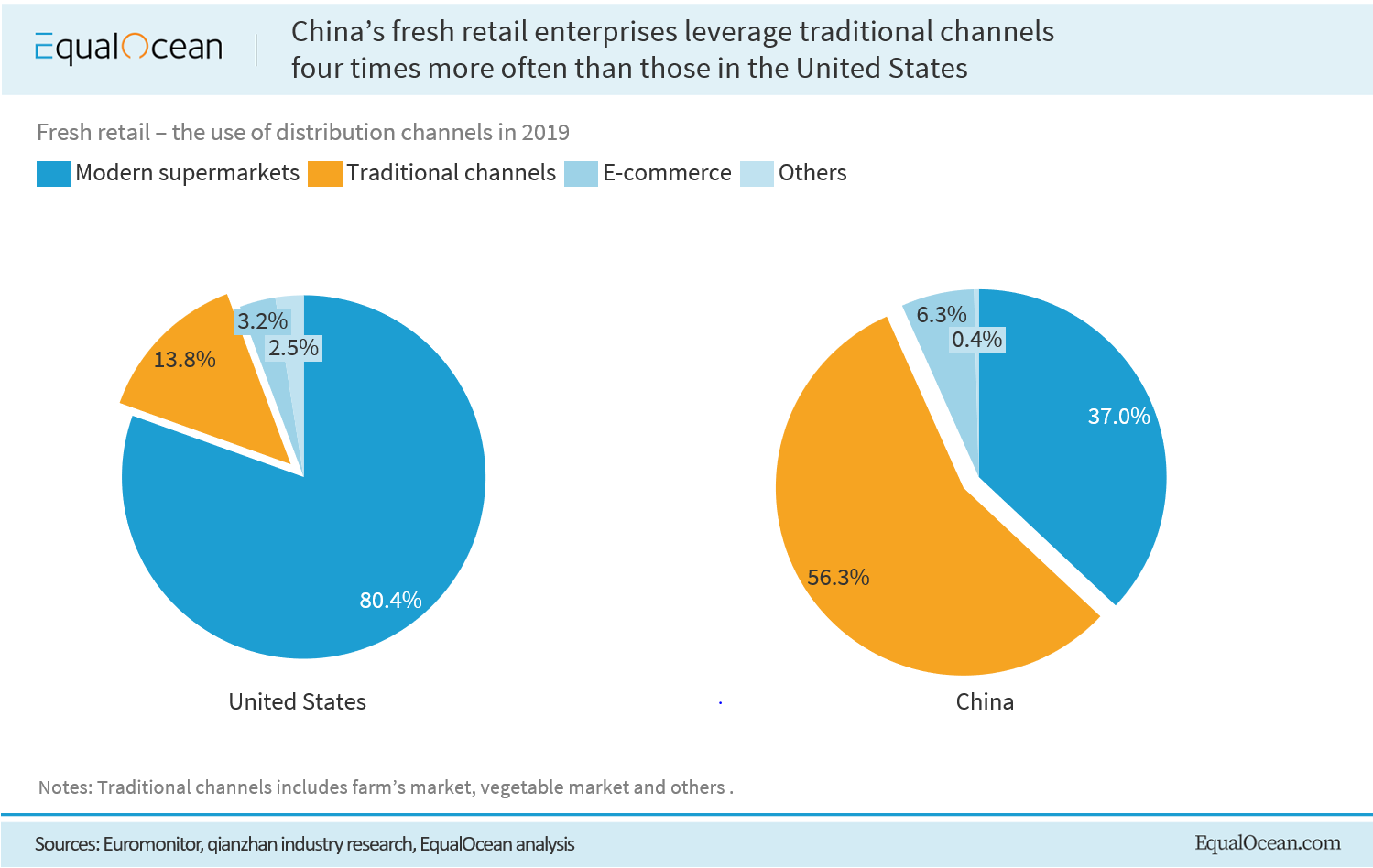 The new wave of fresh food retail is improving supply chain efficiency and replacing traditional sales channels. Nowadays in China, tradtional channels such as farm's markets and vegatable markets still occupies majority distributions methods. Compared to the conventional supply chain, the process contains three to four more distributors, and each level of the distributor will raise prices for sure. While the problem not only includes higher prices but also causes low-quality food. According to data, China’s fresh food loss rate (20%) is much higher than developed internationally (5%); the cold chain circulation rate (50%) is much lower than the United States and Japan (95%).

After kicking out the traditional distributors and establishing upstream suppliers, this fresh provider controls the final price much more, making the right reason for its lower price products. Yipin is not the only one who did this, its similar competitor Fresh Legend has already owned more than 80 bases in 2019, and plans to complete 90% of the direct supply products in the bottom in the following two years. As for the food quality, its price and transportation efficiency are hard to balance nowadays. Other players who focused more on quality, such as Hema Fresh-backed up by Jack Ma, the average cost per order for Hema is three to four times as high as Yipin. The price for small tomatoes is almost six times of Yipin Fresh.

They established their base mainly because countless individual growers mostly provide the traditional supply for China’s fresh food, and the large-scale production is not widely spread. Moreover, China has the habit of transporting goods from south to north and from west to east, which made the supply chain may be a crossover with half China. The low-degree of large-scale production brings the problem of hard to define the standard of fresh goods.

So the freshers have to figure out the way to solve the standard problem. And Yipin’s method is a partner model. Just like discussed before, Yipin Fresh’s new vertical supply chain has the function of distributing various quality food on their own. Through the model, partners take the role of distributors according to their past experiences and own relationship resources. While for traditional distributors, they will define the standard of ‘fresh’ on their own.

Besides, this model also solved the problem of the fast opening of new stores. Employees of Yipin Fresh Store opened the joint venture with the company with their funds. Usually, the store manager of a Yipin fresh store invests (in Chinese) CNY 100,000-400,000, and the deputy store manager invests 20,000-100,000. The proportion of capital contribution generally does not exceed 40% of a single store, and the partners enjoy dividend rights rather than equity. Therefore, Yipin still has the leading power in the store, but it gives the partners the initiative to operate.

Under these situations, the partners have the driving power to put the most welcomed fresh food in their store according to the different needs of communities, which leads to the various selling products among stores. But Fresh Legend chose to build standardized stores in cities. These two stores that are both based in Hefei found their ways to expand the market.

When date back to the development path of Yipin Fresh, it was first just launched offline stores, but since 2019, it started O2O (offline to online) model and opened online stores. The new app Yipin Daojia now has around 4,000 pick up locations, clients order online and pick up in offline stores. While actually, Yipin’s offline stores are just a small part of it. Most of them are community breakfast bars, convenience stores, florist shops, or even dry cleaners. Yipin Daojia cooperates with them through cooperation investment.

So Yipin can expand the market more even if offline stores exist in some communities. As well, these stores can also sell fresh goods from Yipin. These stores are all highly frequently visited among clients' daily life, which brings more potential customers.

But the offline stores and pick up locations didn’t work during the epidemic. All the players offer fresh delivery just like Amazon Fresh, so does Yipin. Now the industry has a default standard of delivery speed: 12-30, which means that the order must be handled in 12 hours and then sent to the clients in 30 minutes. Yipin Fresh also follows, but it’s not only the story of putting offline traffics online. Most elderly clients, such as grandmothers, used to go to traditional markets to pick goods and bargain. These people are forced to go online and transfer part of them to online users for a longer time. The process of replacing traditional sales channels is fastened, taking shorter time for freshers to obtain a market since the habit is not easy to change.

In a word, Yipin Fresh has experienced good days previously. As China almost recovers from the epidemic, and competitors are proving their business models are profitable, the following development trend is worth seeing.