An unprecedented leap from 28 nm to 14 nm lithography has helped SMIC win orders from Huawei -- but the foundry’s technology is still lagging behind that of its global counterparts. 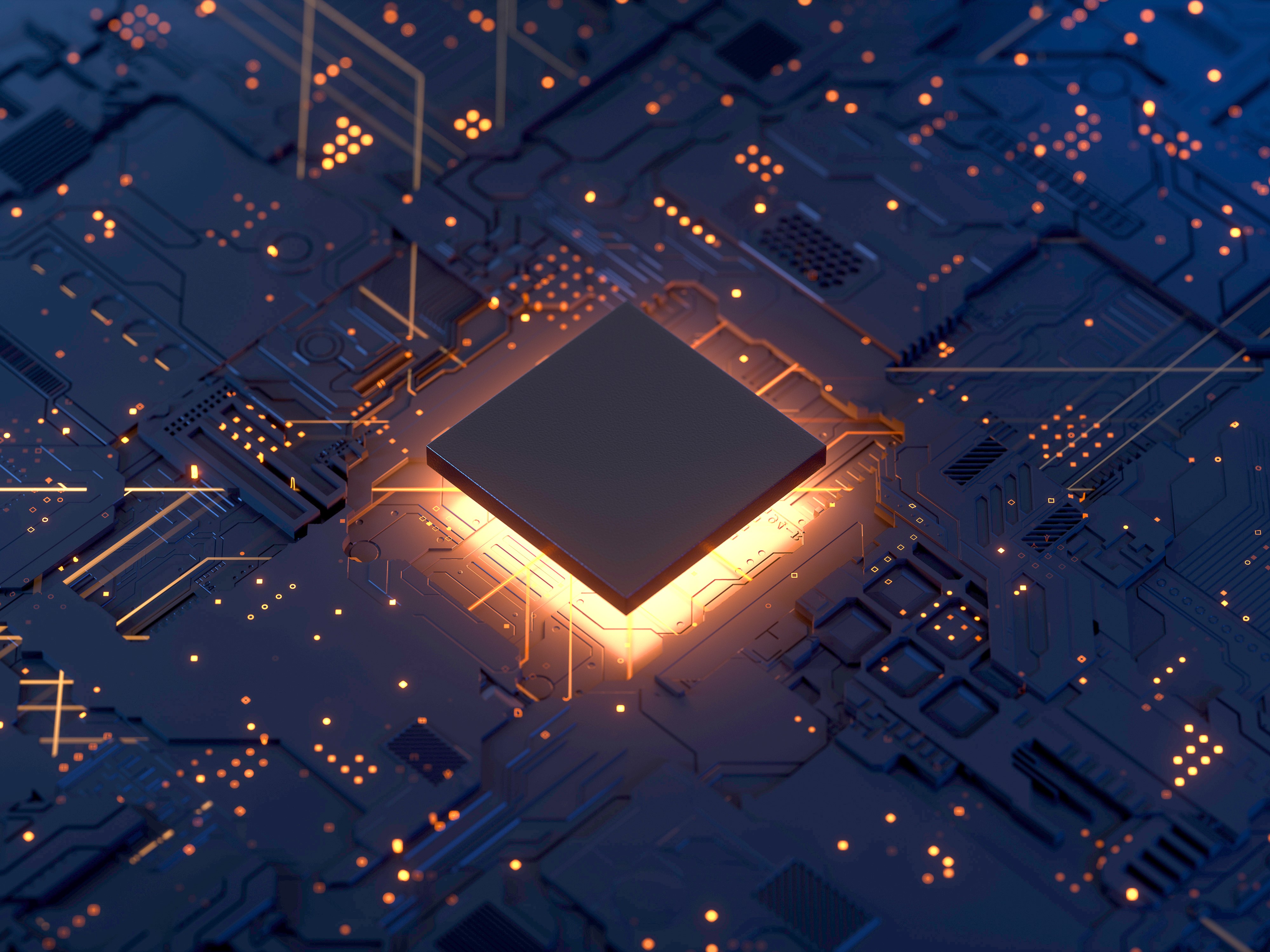 ► Semiconductor Manufacturing International Corporation (SMIC) is one of China’s biggest bets in the global semiconductor race.
► Lavishly invested in by the government over recent years, the foundry has been getting technologically advanced, but is still lacking in talents.
► The global economic turbulence is presenting both risks and opportunities.

The Integrated Circuit (IC) manufacturing process can be divided into three major steps: IC design, foundry, packaging and testing. The specific traits of the semiconductor industry typically require companies to spend capital on research and development and maintain vast production capacities. It is almost impossible for players other than enormous chip giants to follow the traditional ‘Integrated Device Manufacturer’ (IDM) model.

As Moore's law accelerated in the second half of the 20th century, unmet demand from the industry upstream was the reason for the establishment of TSMC, the world’s first company to specialize in completing manufacturing orders from IC designers, in 1987. The company pioneered a fundamentally new business model in the field – the semiconductor foundry.

Lured in by this new type of low-cost, asset-light chipmaking, many companies have started to pursue the fabless model. Foundries have mushroomed around the world, becoming the key links in the global electronics supply chain.

As one of the largest foundries globally, SMIC’s (00981:HKEX) income from its main business segment (chip manufacturing at 0.35 µm to 14 nm), accounted for 90.81% of its total revenues in 2019. It also provides one-stop support services, including design and IP support, photomask manufacturing, bump processing and testing, to name a few. 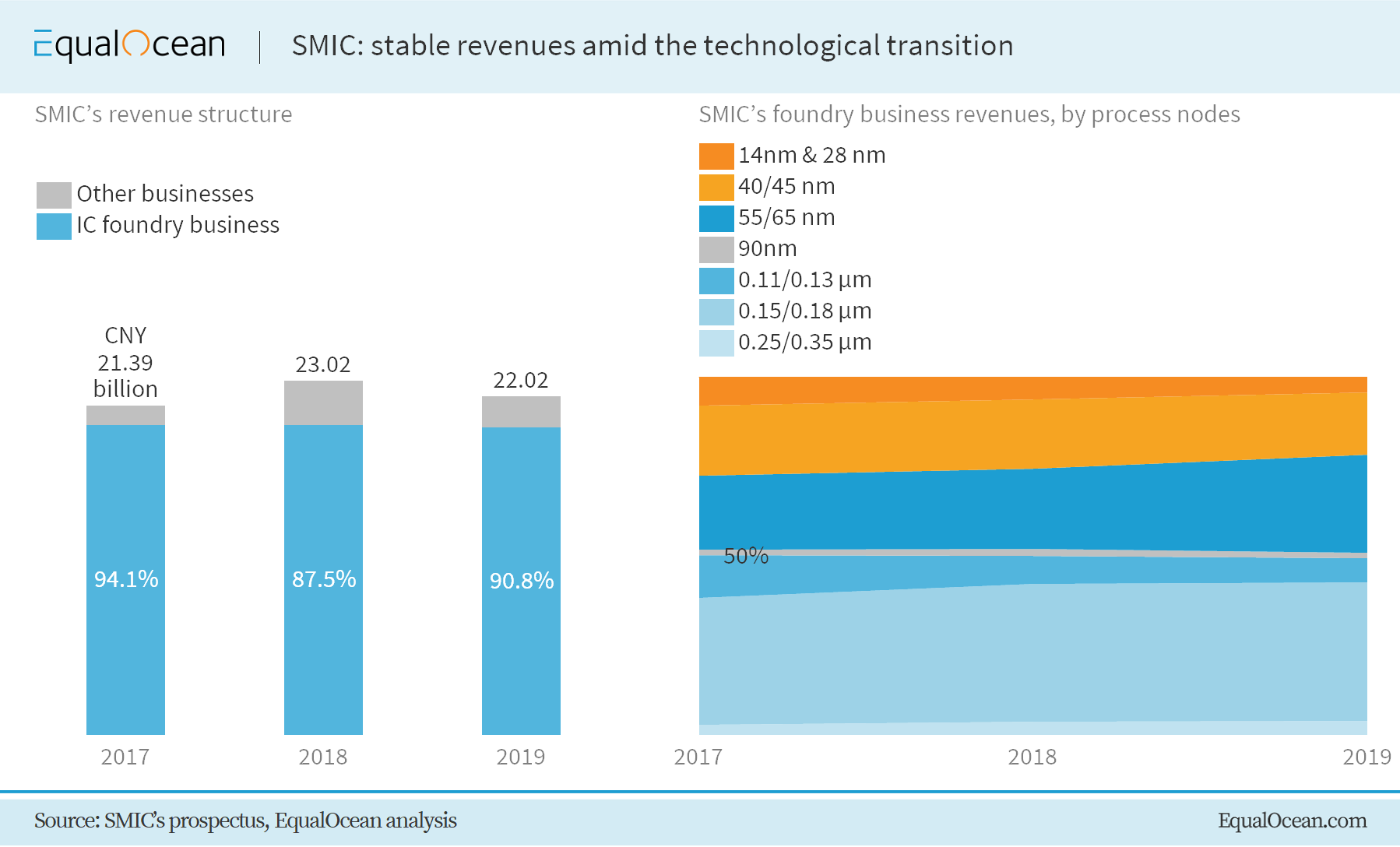 However, around the globe, not only SMIC but also GLOBALFOUNDRIES and UMC (2303:TWSE) have realized the mass-production of 14 nm in 2015 and 2017 respectively. TSMC has meanwhile been capable of 7 nm production since 2018. SMIC is almost two generations behind TSMC. 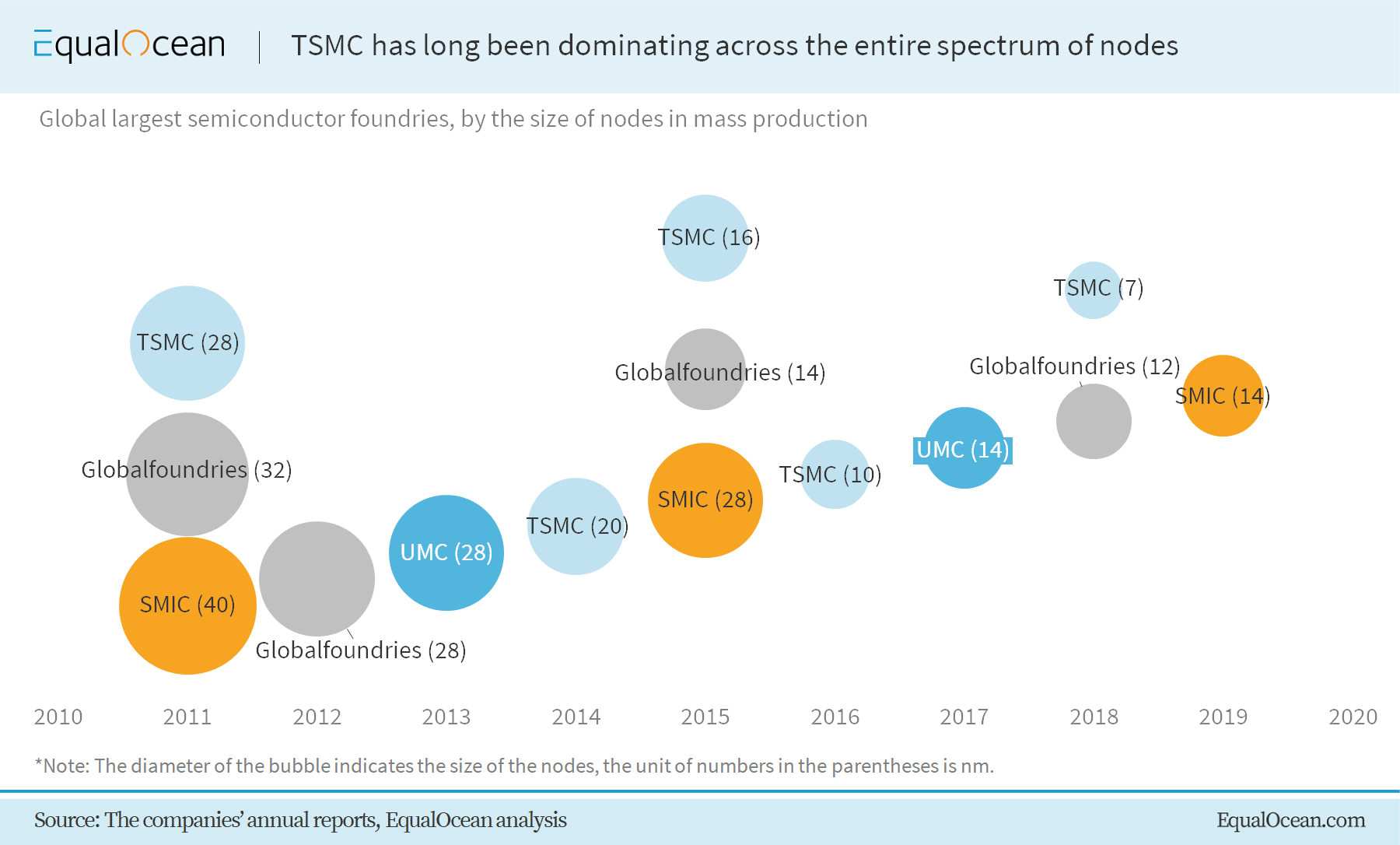 According to data from Trendforce, we can see that, in 2Q20, TSMC’s market share was 51.5%, which was the highest among all foundries in the world. And the second place was occupied by Samsung, the market share of which was 18.8% in the same period. Among the top five foundries, only SMIC is a China mainland company, with a 4.8% market share ranking it fifth.

After browsing the information above, we find that TSMC is absolutely the leader in the foundry market. As an important partner of Huawei, it is currently caught in the crossfire between the two largest economies, and Huawei has transferred some of its 14 nm orders to SMIC.

However, though SMIC can produce 14nm, it has lagged behind TSMC in many aspects, including R&D investment, revenue and gross profit margin, for years. 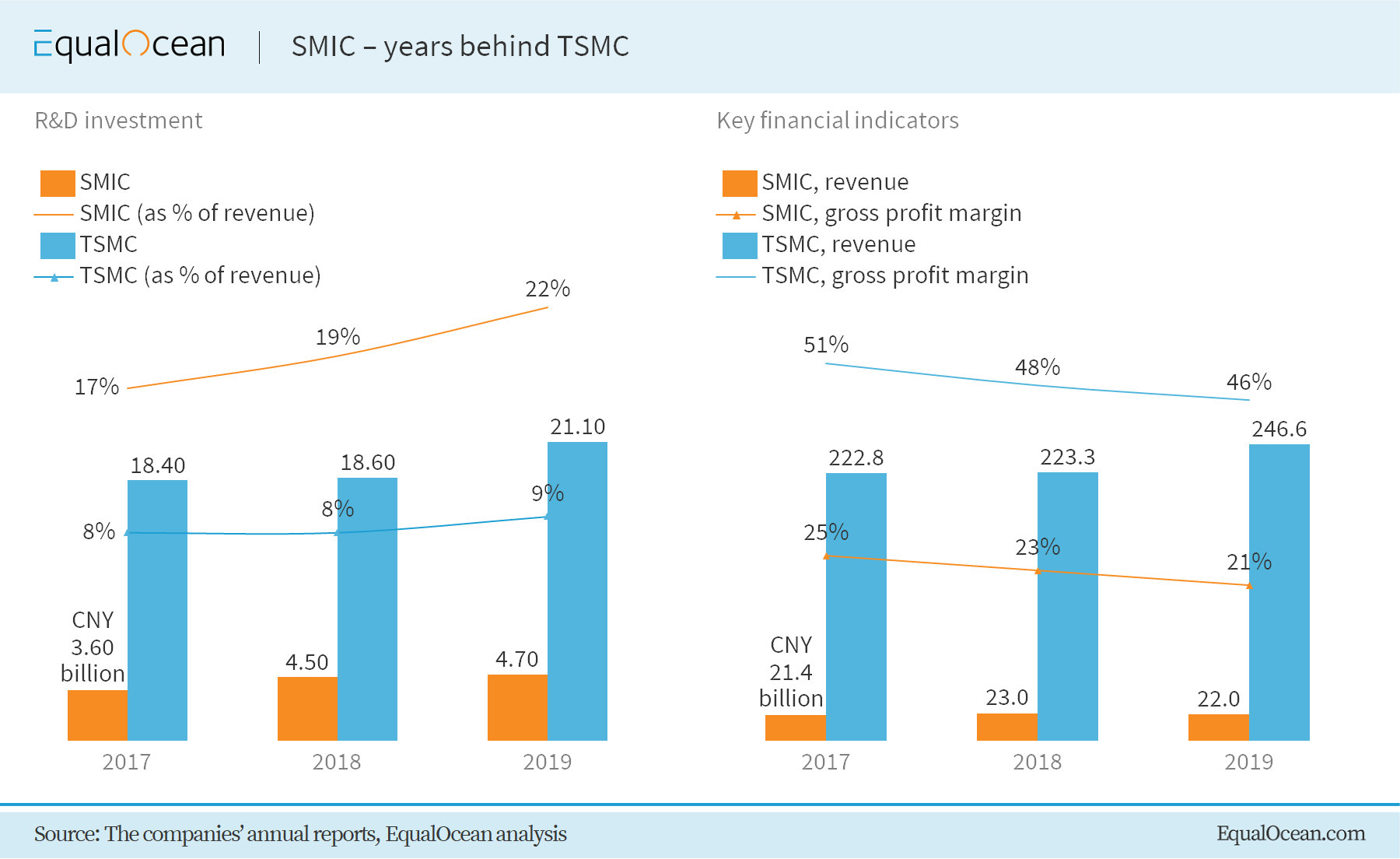 Apart from those parts, there are some other disadvantages of SMIC compared to TSMC. For example, SMIC ordered an Extreme Ultraviolet Lithography (EUV) from ASML two years ago, but it hasn’t received the results yet. EUV is a piece of crucial equipment for making chips under 7 nm. Considering this, on the supply side, it’s hard for SMIC to be competitive with TSMC.

By comparison, on the demand side, there are opportunities for SMIC. Under the bans released by the US government, HiSilicon needs to turn to domestic semiconductor companies for the supply chain. As the best local player among foundries, SMIC is set to be the crucial partner of HiSilicon and Huawei.

Another thing is that, on May 15, SMIC announced that National Integrated Circuit Industry Investment Fund and Shanghai Integrated Circuit Industry Investment Fund agreed to make a capital contribution of USD 1.5 billion and USD 750 million respectively into the registered capital of Semiconductor Manufacturing South China Corporation (SMSC). 50.1% is indirectly owned by SMIC.

This is not only capital that matters in the microelectronics world: experienced talents are vital for the development of the domestic chip industry. The company can buy equipment, but if no one is capable of using it, no matter how powerful the machines are, it will be no more than just iron-scrapping. Quite possibly, triggered by the recent geopolitical uncertainty, more Chinese nationals majoring in engineering and graduating from prominent US schools will be returning to the country in the following years. Some of them will join China’s top chipmakers, while others will start their own fabless firms.

In the short term, Chinese chipmakers are likely to face profound difficulties, as the international supply chain is getting disrupted in many ways. In the long run, as usual, challenges and opportunities coexist. In league with global economic uncertainties, ubiquitous competition in the domain will shape the strategies of up-and-coming Chinese semiconductor companies. Representing the country in one of the principal subsectors, SMIC, seemingly, has no margin for error.

CONTACT US
Scan QR code to contact us for professional consulting services
Next article
China TransInfo Technology: Unwavering in Its Smart City Ambitions