During the ‘618’ promotion, Midea’s sales topped in the field of home appliances on JD.com, but only took third place on Alibaba's Tmall, behind Gree and Haier. When will Midea win the ‘all-channel championship’? 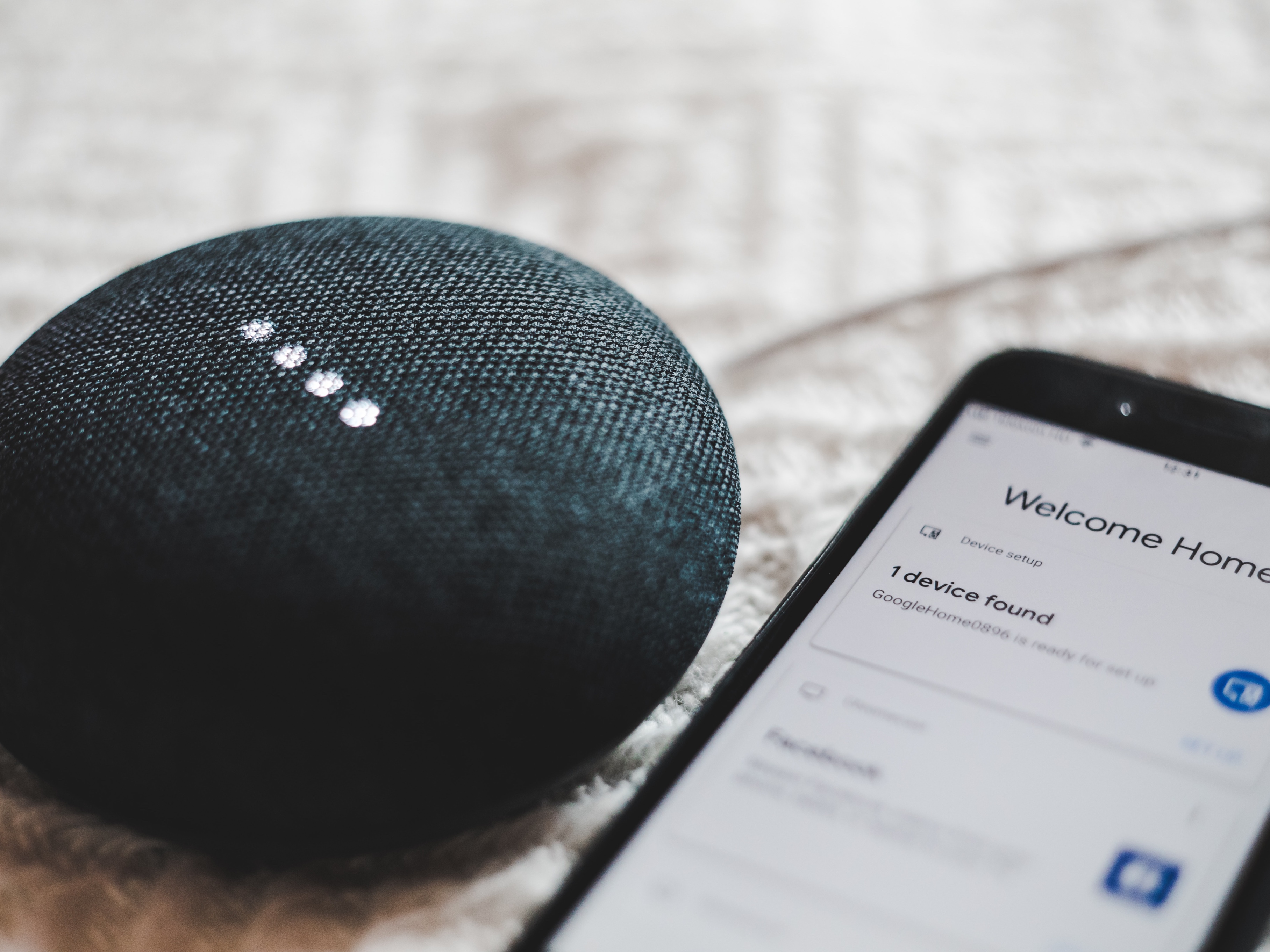 ► With the highest revenues among its peers – of CNY 279 bn – Midea is getting a larger market share.

► The trend of increasing technology and automation, along with the arrival of ‘industry 4.0,’ brings opportunities for Midea's robot business.

► Haier’s ambitious overseas strategy, which gained it the most significant sales in 2019, is threatening Midea.

Just over a week ago (June 15, 2020) the Foshan police received a call from He Jianfeng, claiming that his father, He Xiangjian, the founder of Midea Group (000333:SZ), had been kidnapped by unknown people at his home. The specific reason is not yet known, but he retired early in 2012, announcing that he would no longer serve as chairman and would be succeeded by Fang Hongbo. Under the outstanding leadership of the latter, Midea has come up with dazzling results.

Established in 1968, Midea Group has long been committed to a diversified strategy. Since 2001, Midea has been acquiring core technologies and expanding its product structure through mergers and acquisitions. So far, it has four business segments – Heating Ventilation and Air Conditioning (HVAC), Consumer appliances, Robotics and automation systems and Others. 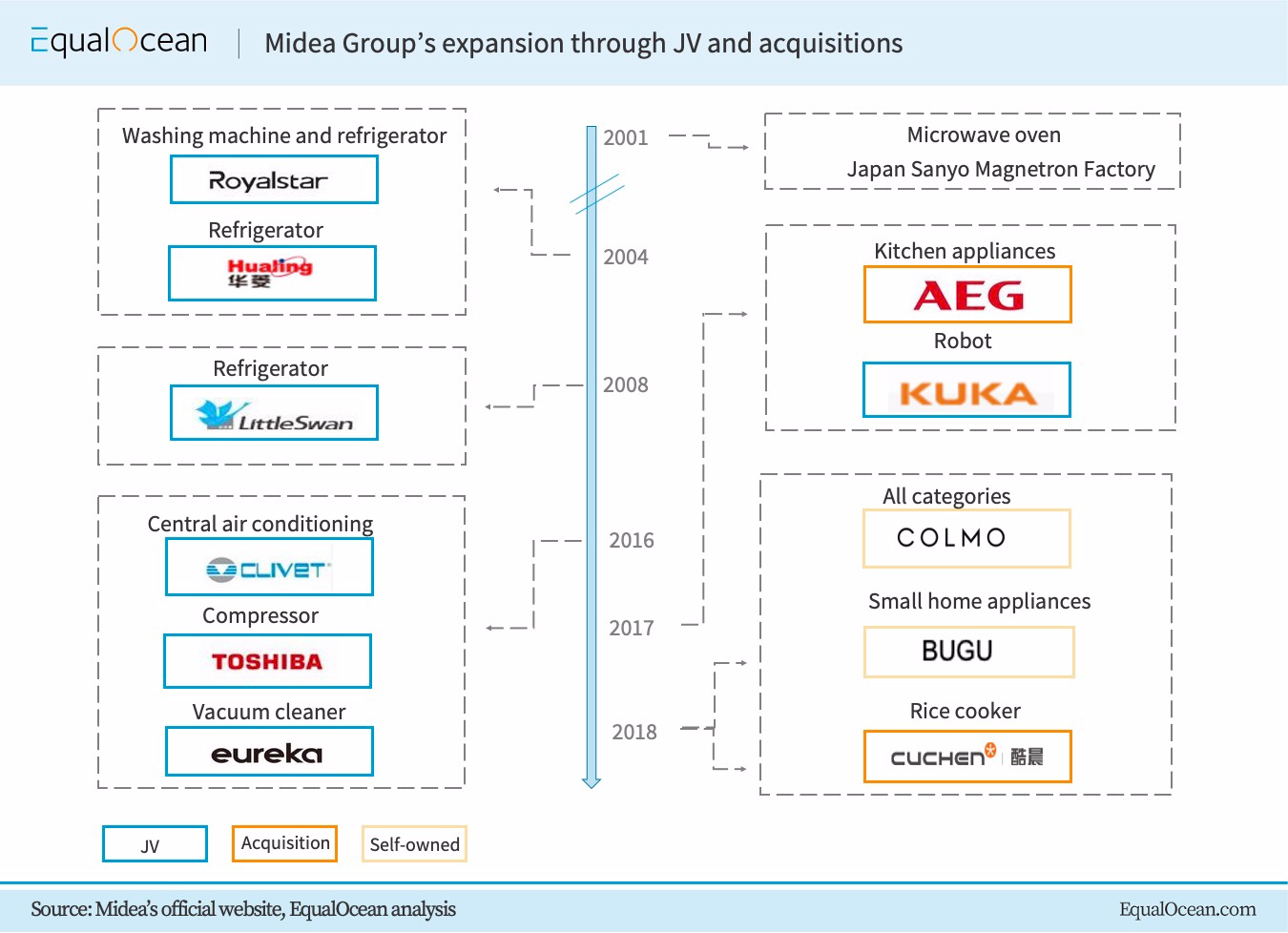 In the home appliance arena, however, Midea does not have a killer product that dominates consumers’ mindshare. Gree Electric’s (000651:SZ) air conditioners (ACs) were the first to reach Chinese consumers’ minds. As for refrigerators or washing machines, Haier’s name jumps out; the same goes for kitchen appliances, where Robam (002508:SZ) is better-known for its high-quality products.

Midea Group is an excellent all-round player. It has generated the highest total revenue in the home appliance industry for three consecutive years.

Midea’s 1Q20 earnings results show its resistance during the pandemic, possibly due to its diversified structure, which has a stronger ability to resist risks. Contrary to this, Gree was impacted heavily, seeing the net profit margin dropping from 12% to 8%. Besides, Midea’s income is three times that of Gree, despite the fact that the income gap between the two was not large previously. 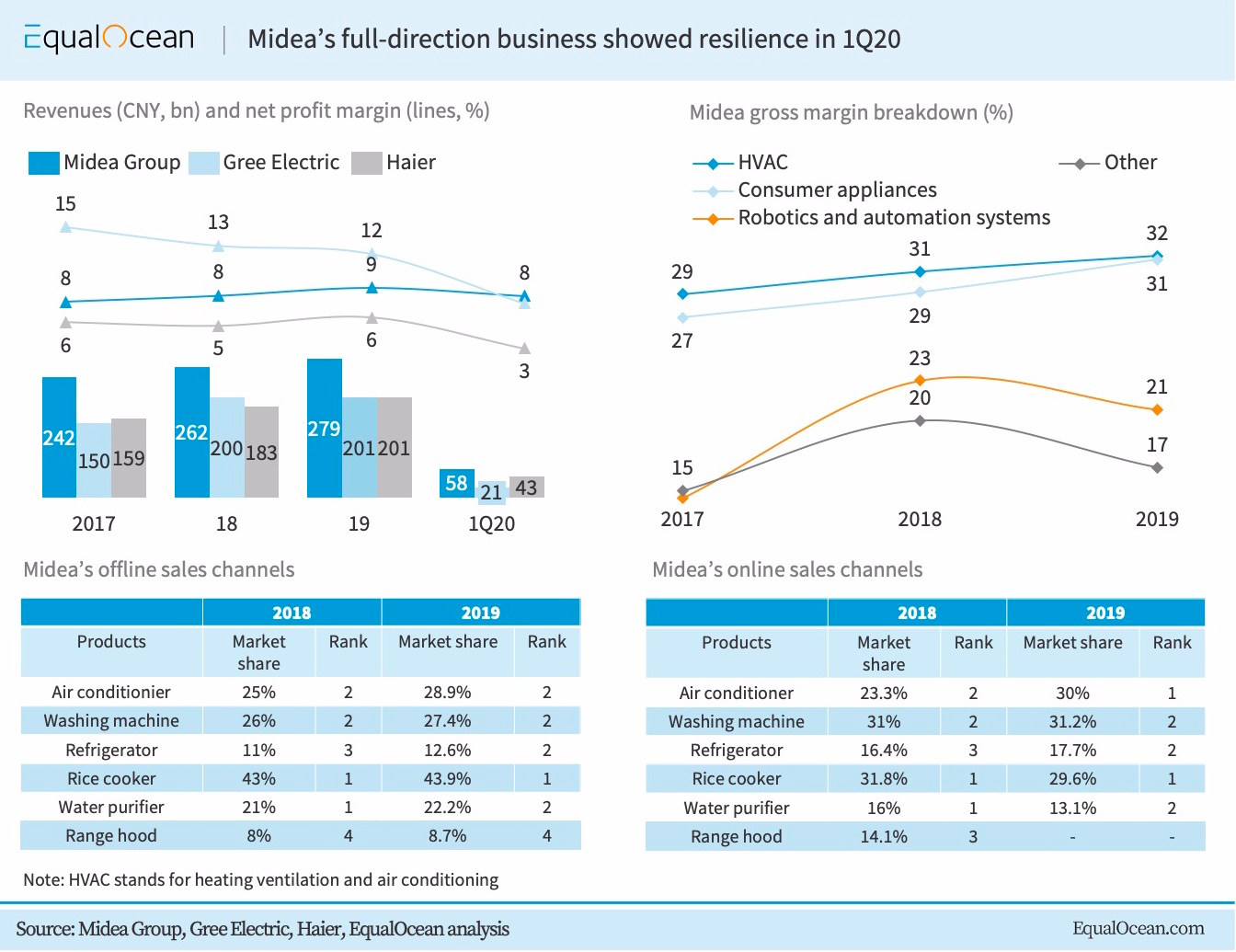 Have been operating for many years, Midea's two significant businesses HVAC and consumer appliances enjoyed a rising gross margin due to improved cost management. Robotics saw a sharp rise in gross margin in 2018, thanks to a 14% decrease in costs.

White home appliances, such as air conditioners, washing machines and refrigerators ramped up market shares in terms of both online and offline sales channels, with ranking almost unchanged. The gradually increasing market share of these products, which set the highest sale price and generated the most revenue, is likely to push Midea to a higher position in the global market.

The robot business brings Midea closer to a ‘Technological Group’

In 2017, Midea’s acquisition of KUKA Robot officially started its ‘tech decoration,’ followed by engagement in R&D investment one year later. The new business, robotics and automation systems accounted for only 10% of total revenue in the past three years, and its gross profit margin reached 20%. 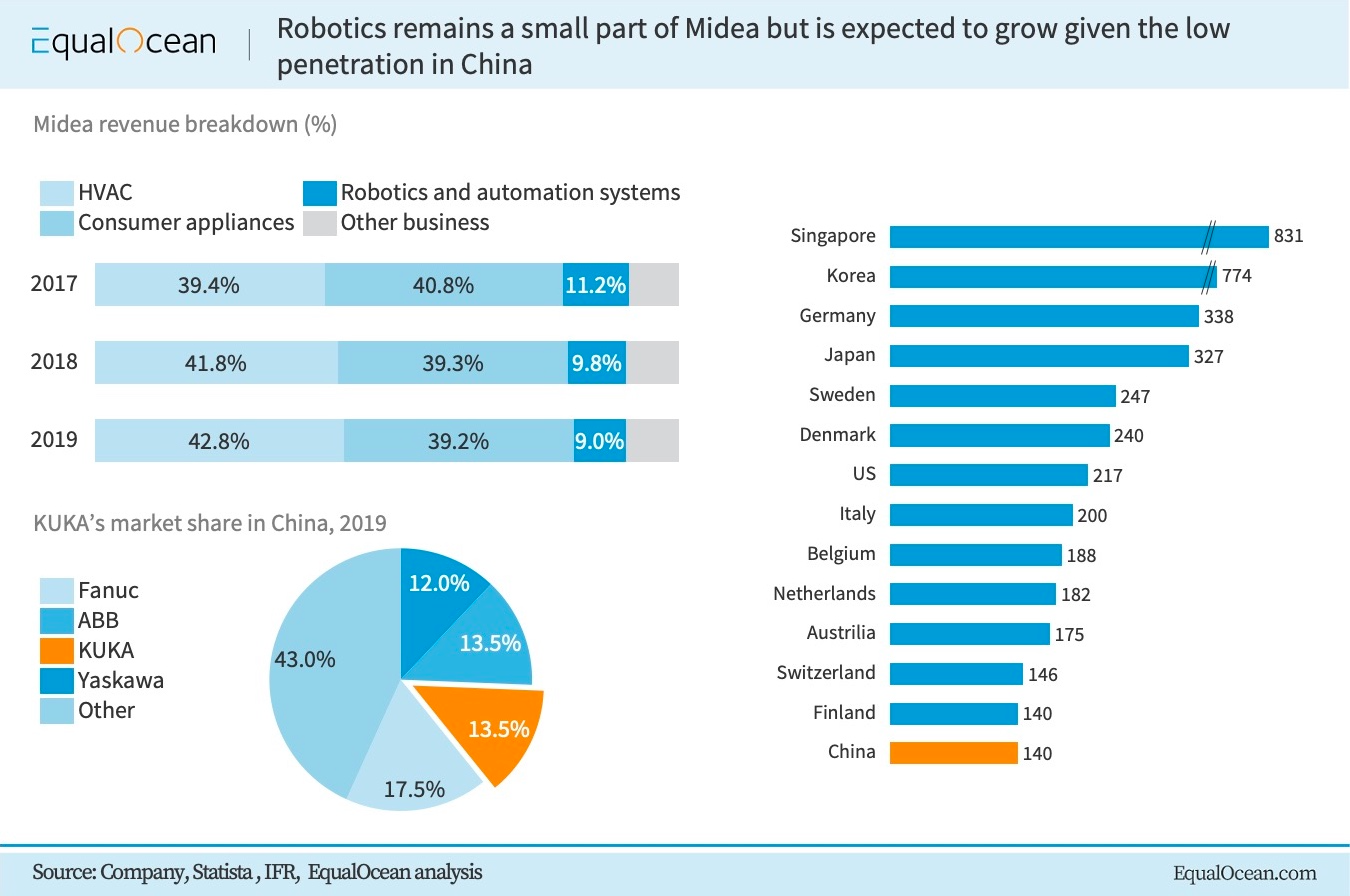 According to KUKA’s 2019 annual report, automobile manufacturing is currently the leading application scenario of robots, carrying about ten times the activity of the general industry. Interestingly, Midea acquired Hekang New Energy Technology Co., Ltd. in 2020, stepping into the new energy vehicles field. This is a new technological transformation that Midea planned for a long time.

KUKA Robot’s market share in China ranked second in 2019, following Fanuc. Besides, the density of industrial robots in China is at a low level by worldwide standards, providing opportunities for plugging the gap in the robotics automation market. Considering that robots will replace repetitive and tedious work in the future, ‘Midea Technology Group’ is worth waiting for.

From another perspective, since increasing R&D investment in 2018, Midea’s industrial Internet platform ‘M. IoT’ has launched more than 20 products, including smart refrigerators, smart air conditioners and sweeping robots. In addition to selling smart products through the C-end, the platform’s intelligent solution also exports products and services to more than 200 B-end customers in different industries.

Challenges under the global strategy

With around 200 subsidiaries, Midea has 28 R&D centers and 34 factories worldwide. Overseas income increased by 50% to CNY 117 billion in 2019 compared with four years ago, with up to 42% of revenue from outside China. 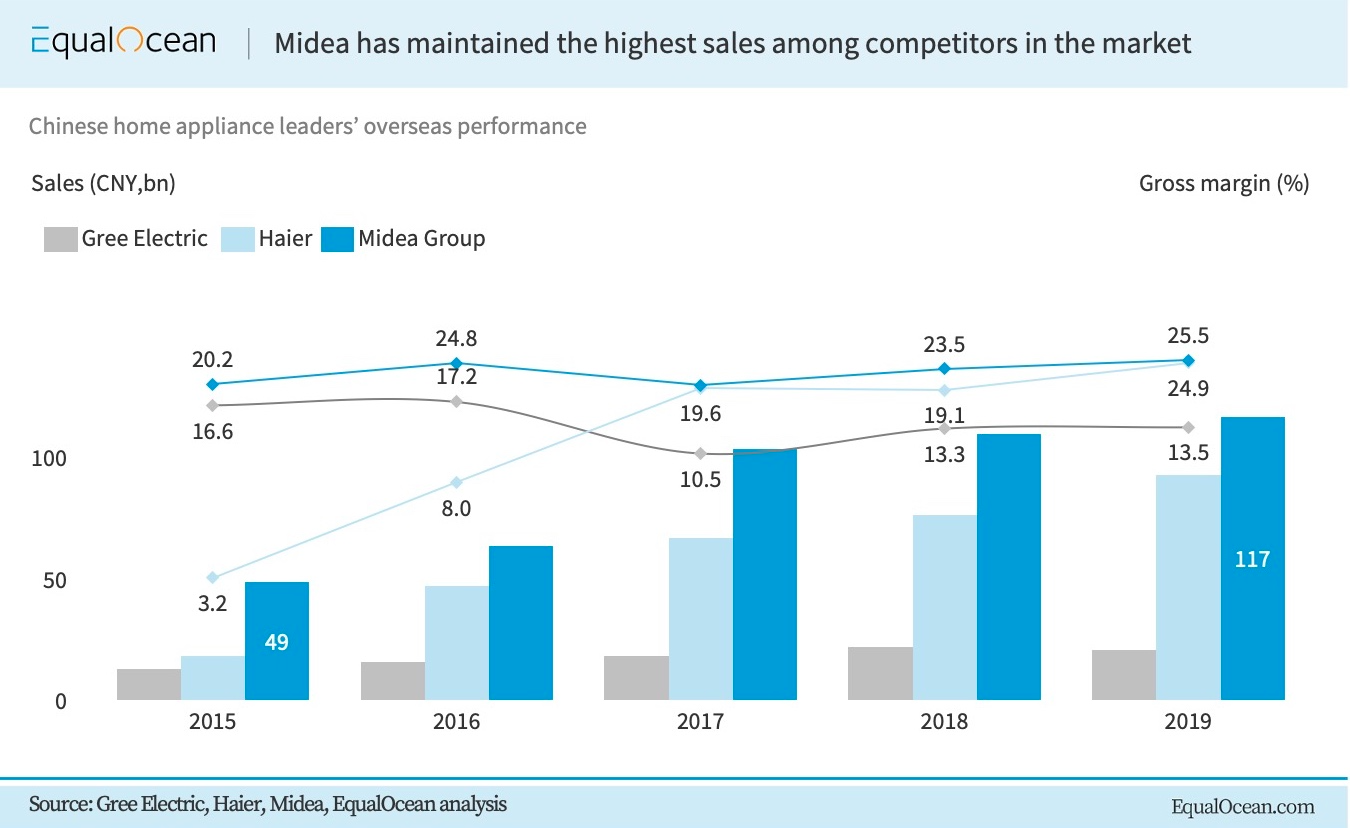 In contrast, Haier generated a fivefold increase in overseas income in the past four years. Haier’s global strategy has always been to spread its brands. As a result, 100% of its foreign revenue comes from self-operated products with lower gross profit. The approach once put Haier in difficulty but looked good in 2019. The gross margins of its overseas business touched the lowest level, 3%, in 2015. However, the gross margin of Haier was up to 25% in 2019, the same as that of Midea.

If Midea aims to make money, OEM can support it. Most such orders come from European and American big clients. But if the giant’s ultimate goal is to win market share, Haier is the biggest stumbling block. The Haier brand has invaded developed countries, such as Europe and America, while Midea’s promotion of private brands focuses on emerging markets, such as India and the Middle East.

China’s home appliance brand exports currently account for only 2.46% of the overall overseas market share, and 82% of this comes from Haier. Regarding the foreign market, Midea needs to focus on how to promote its brand instead of generating most revenues from OEM.