Gree Electric came first in the home appliances field in the ‘618’ with CNY 1.36 billion in sales on Tmall. This result can be regarded as Gree’s rebirth after experiencing sharp declines in transactions brought by COVID-19.

► The sales model of cooperating with dealers enjoyed a high gross margin but lost online share.

► Gree’s diversified business branches are yet to bring significant profits.

Established in 1991, Gree Electric (000651:SZ) is a traditional home appliance conglomerate. Three brands are under the group – Gree for air conditioners (A/C), TOSOT for household appliances, and Kinghome for refrigerators. With products sold in more than 160 countries, the company ranked first in the household air conditioners field, with a global market share of 20.6%, in 2019. Central air-conditioning had secured a leading position with a domestic market share of 14.7%.

Dong Mingzhu, the CEO of the giant, has been trying to broaden its business strength and reduce the proportion of the air conditioners segment. She redesigned the business structure into four parts: air conditioners, small home appliances, smart equipment and others. Compared with 83% four years ago, A/C revenue against total revenues decreased to 70% in 2019, a relatively small number compared to Midea Group’s average of 40%.

High reliance on air-conditioning led Gree to follow the market’s twists and turns. In 2017, the global climate continued to warm rapidly, and some areas’ temperature was even as high as 40 degrees, resulting in a roaring demand for cold air. Thus, Gree’s growth rate and net profit margin reached a peak. 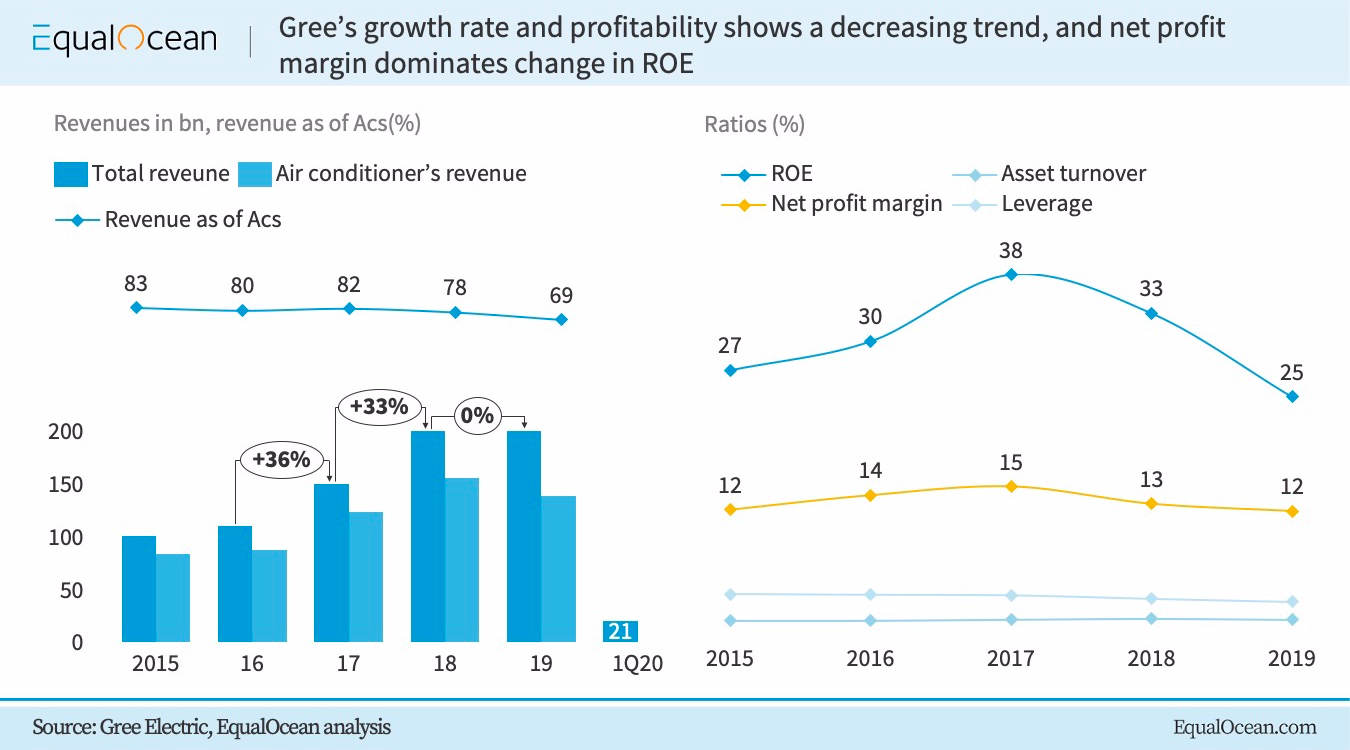 What welcomed Gree next was a contraction in the air-conditioning market. According to ASKCI Consulting’s report in 2019, although the output of air conditioners increased by 1.21%, sales decreased by 0.74% year-on-year. Total exports underwent a 0.82% decline as well. To grab market share, Gree sacrificed price for quantity. As a result, Gree’s offline market share retained No.1; Midea seized the online throne, and Gree fell to the second place; revenue generated from air conditioners declined; total revenue growth rate touched the zero line; profitability fell to 12% in 2019.

COVID-19 rubbed salt into Gree’s wounds. Total revenues plummeted from CNY 200 billion in 2019 to CNY 20 billion in the first quarter of 2020, and the net profit margin hit a 5-year low. In contrast, Midea Group, a more all-around player, recorded three times the revenue of Gree.

ROE kept pace with the net profit margin’s ups and downs from 2015 to 2019. The rise of ROE didn’t sacrifice leverage ratio and asset turnover, which stands for solvency ability and operating efficiency, respectively. Besides, the rising cost of raw materials such as copper, aluminum and steel did not drag the gross profit down in 2017, which was stable at 37%, reflecting Gree’s advantage in cost savings.

Sales model: Pros and cons of binding the dealer

Gree establishes new sales companies through joint ventures with tier-1 dealers and then sells products to consumers through second- and third-level dealers. Even in the off-season, Gree’s risk of excessive inventory is significantly reduced, avoiding dramatic fluctuations in sales. To maintain a long-term relationship with dealers, the company implemented the off-season and year-end rebates, building a positive circulation among the offline channels. 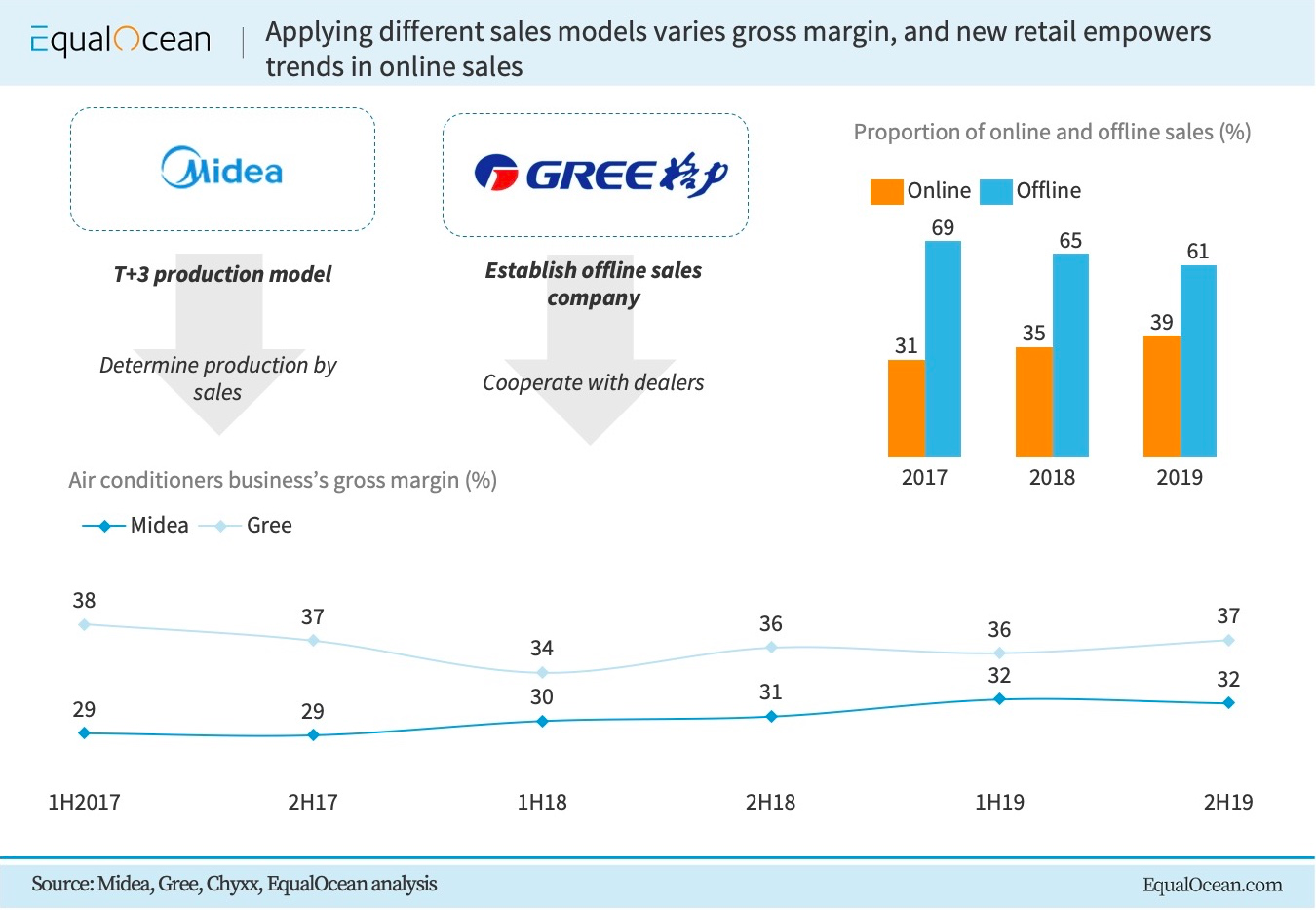 However, Gree’s severe frustration amid the pandemic is inseparable from its sales model, relying on offline dealers. Dong Mingzhu has always adhered to the physical store strategy to protect dealers’ interests. Online sales as of total revenue have increased for three consecutive years, from 31% in 2017 to 39% in 2019. Midea took away the online sales champion’s crown in 2019. Gree is temporarily seated in the offline throne, but its total market share of air conditioning is only 32.7%, beaten by Midea’s 34.9%.

Witnessing a gradual slump in traditional manufacturing, Gree Electric embarked on a technological transformation. Since 2017, new business segment Smart equipment has been added. However, this business only generates 1.4% revenues, and the profit margin was as low as 6%. 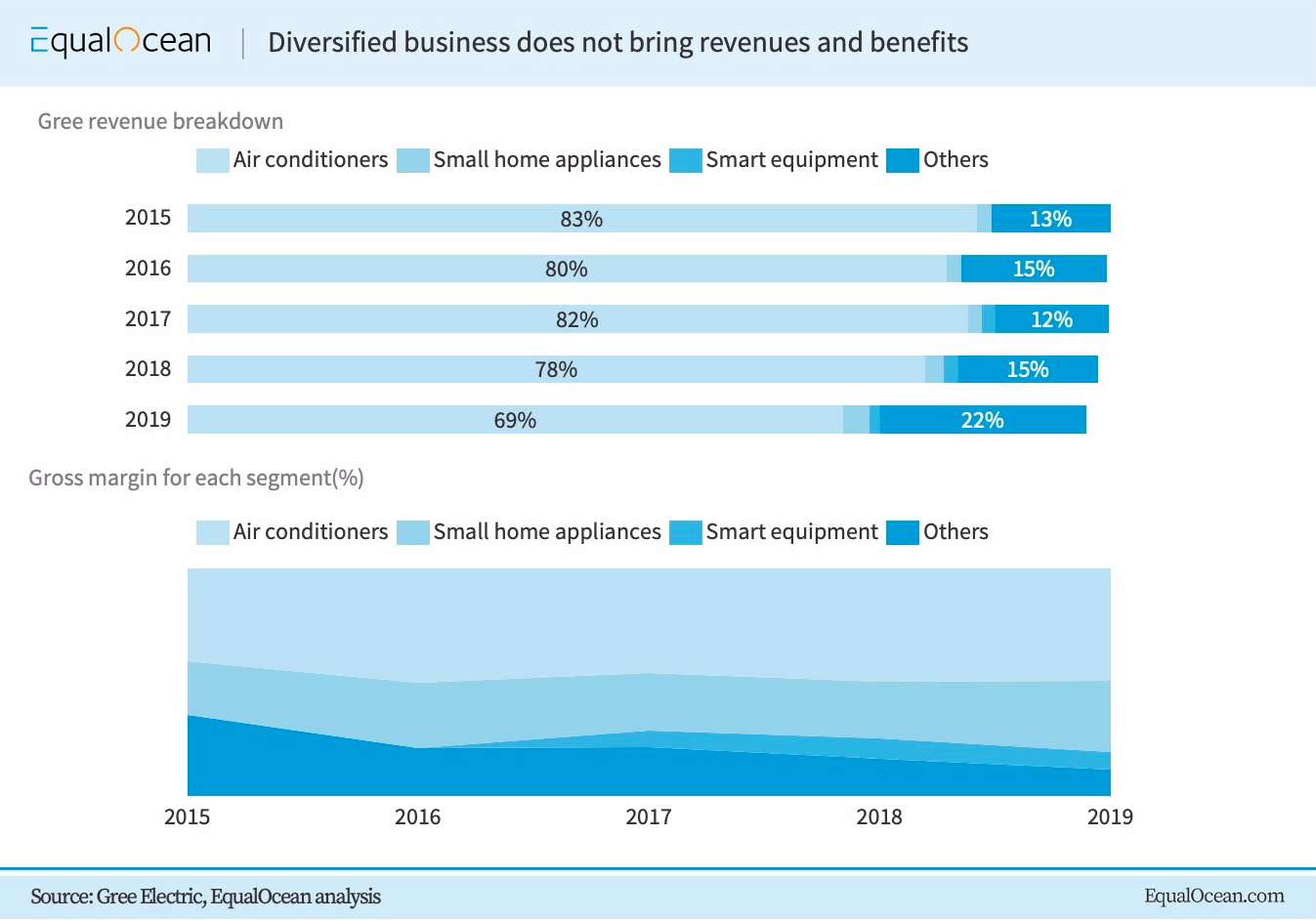 Throughout the transformation process, Gree moved into smartphones, new energy vehicles and chips. Gree’s launched a mobile phone in June 2016. “If Gree engaged in making mobile phones, consumers would not run into other brands’ arms within three years,” Dong Mingzhu said. So far, the domestic mobile phone market has been seized by Huawei, Xiaomi, Vivo and OPPO, leaving no space for Gree.

Dong Mingzhu joined hands with many companies, including the Wanda group, to invest CNY 3 billion in Zhuhai Inlong company in 2016, officially invading the new energy vehicles field. It unveiled a car model priced at CNY 430,000 in March 2020, which is far different from how a tech and next-generation car look like such as Tesla. Moreover, the company’s decision to enter the NEV industry incurred costs of over CNY 10 billion.

In 2016, Gree Electric disclosed that it would develop chips by itself instead of importing CNY 4 billion chips each year. Subsequently, the home appliances giant invested in dozens of semiconductor companies, such as San’an Optoelectronics (600703:SH). Although this business has not yet taken to supporting diversified transformation, in 2019, the company announced it had adopted 10 million self-developed chips for its air conditioners.

Affected by the epidemic, in March 2020, Gree announced a high-profile investment of CNY 1 billion to develop high-end medical care. Laying out industries with long cycles and high risks, will Gree follow the same old disastrous road?