The pandemic has accelerated the polarization of Chinese EV’s newest players. Capital appears to be converging on the top players while others are facing a brutal knockout. 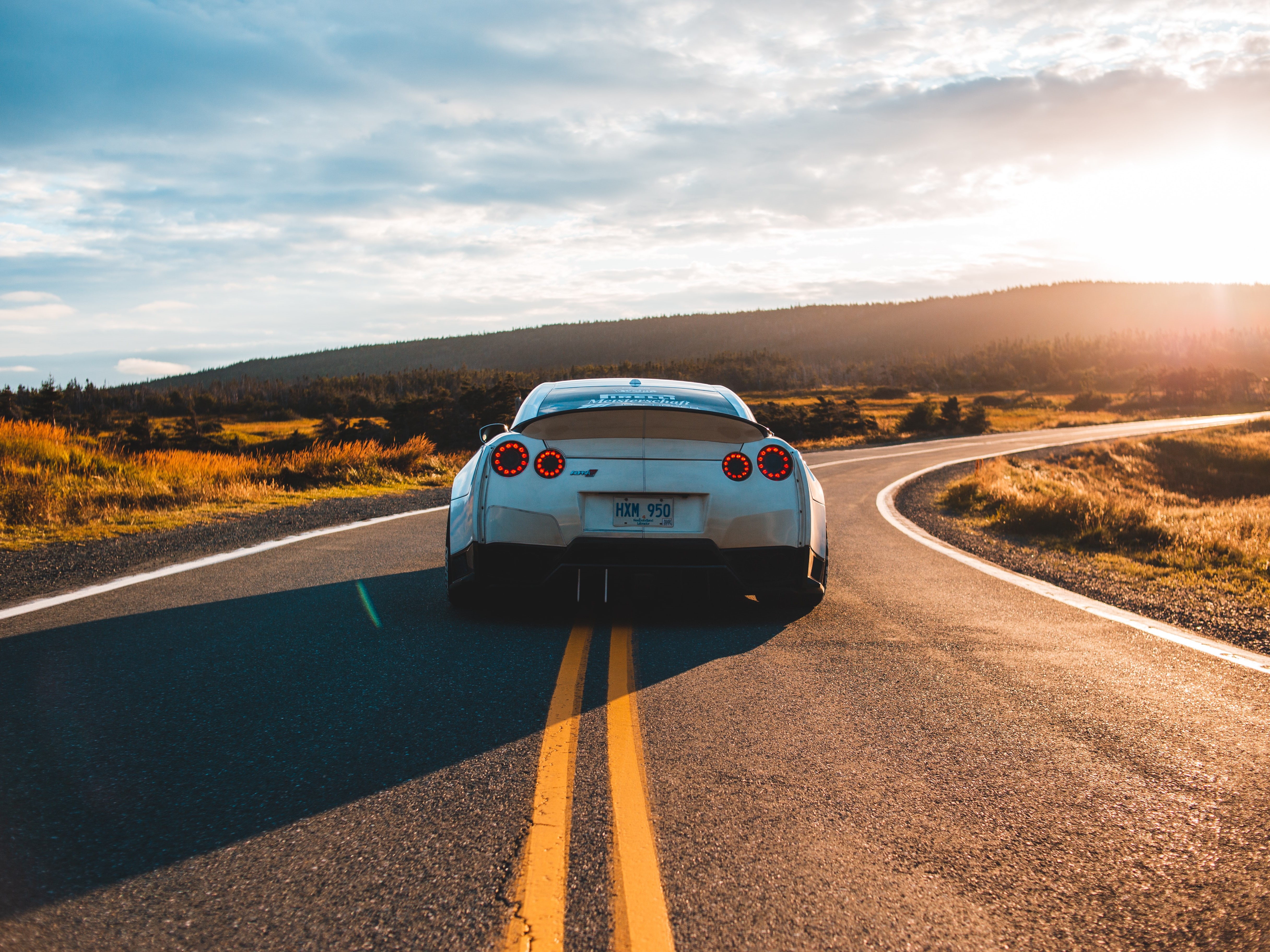 ► The sudden epidemic has hit China's new energy vehicle (NEV) sales hard. The ‘new forces’ (the latest generation of new EV makers) are having to face a life-or-death situation sooner than they expected.
► Only 11 new brands in China's EV market sold/delivered cars in the first five months of 2020. Among them, NIO (NIO:NYSE), Li Xiang, Xpeng and WM Motors showed overall stability in sales and thus form the tier-one team.
► Saleen and Byton, among others, suffered major operational, financing and production problems and are now facing an abrupt contraction or collapse.
► In contrast with the rigid financial situation for other players, the four tier-one players all raised new funding (NIO, Li Xiang and WM Motors) or planned to go public (Xpeng) signaling their advantages for the second half of 2020 in the EV car making competition.

The life-or-death moment is coming

11 new brands sold vehicles in the first five months of 2020. Among them, NIO, Li Xinag, Xpeng and WM Motor showed overall stability and a strong growth in sales as the epidemic slowly got better – they thus formed the tier-one team, which accounted for more than 80% of market share in China’s NEV market in the first half of 2020. 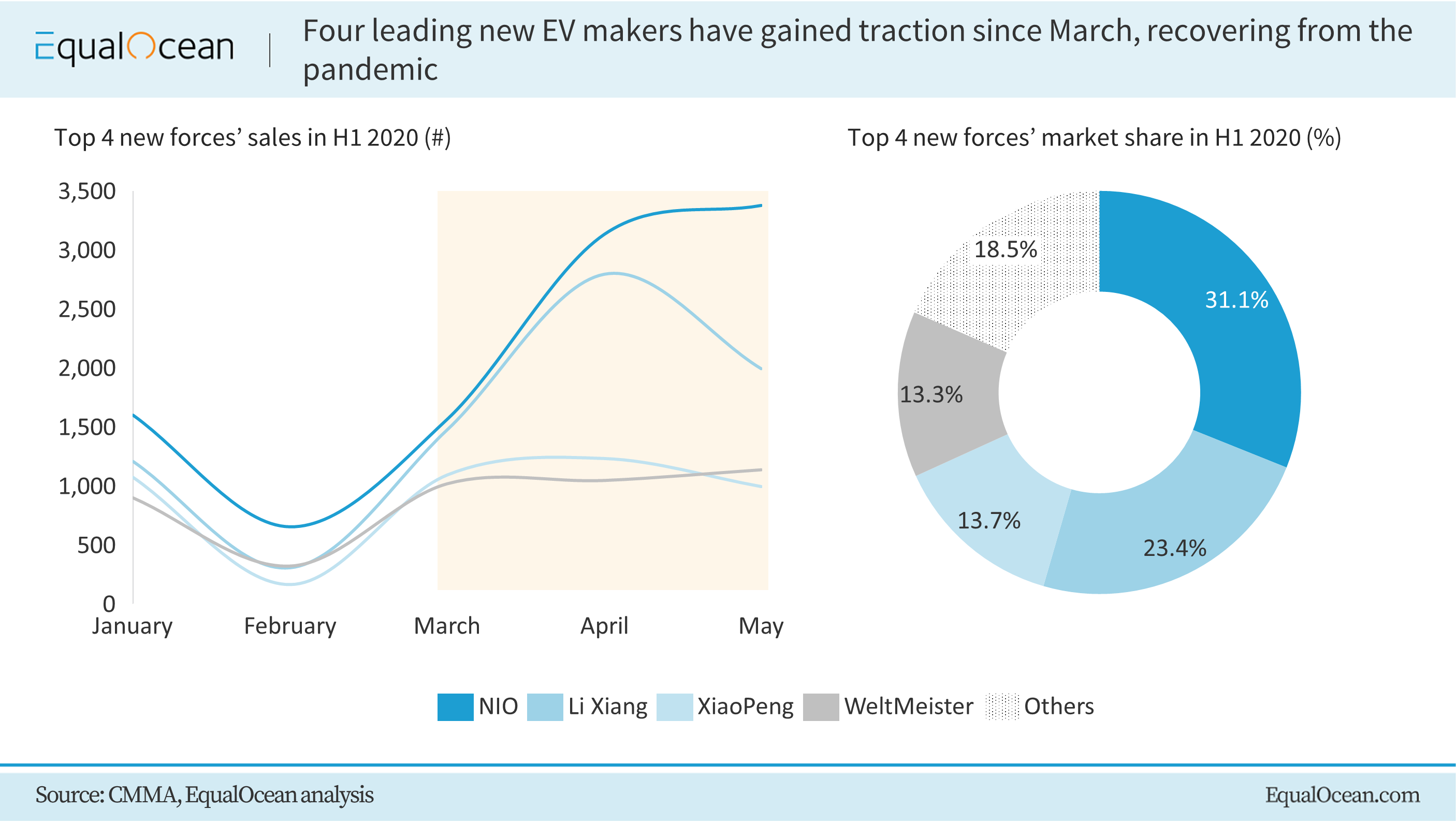 For the other players, however, things were not going that well. The slumping market demand brought by the epidemic worsened automobile manufacturers’ general health, especially among those who haven’t realized mass production and have a rigid cash flow. Just last week, Byton was exposed to a business crisis. Its Nanjing factory is being closed due to unpaid bills, while the Shanghai and Beijing offices have also been rented out, and the salary of employees for the past four months is still owed.

Coincidentally, Bordrin recently announced that their capital chain was ruptured. The indebted CEO fled to the US. Saleen was sued by its state-owned shareholders for suspicion of embezzling state assets, while Qiantu Motors, Singulato and Enovate have postponed their mass production timelines repeatedly. Lack of money is a problem that almost all new companies have to face. Winning support from investors and entering mass production is even tougher when the top players already started generating revenues.

Though the negative news circulating around the business is doing harm, the investors still hold high expectations. Tencent saved NIO by purchasing USD 425 million in convertible debt. NIO raised another USD 354 million by issuing American Depositary Shares (ADSs) in the first half of 2020.

The company’s stock hit the lowest point in the first two months of 2020; however, encouraged by the company’s Q1 2020 financial performance, its stock price surged 40% in six trading days.

Its domestic peers – Li Xiang, Xpeng and WM Motor – are all in the process of fundraising. Xpeng is reported to have secretly filed for an IPO on the US stock market, aiming to raise USD 500 million; Li Xiang is likely to close a Series D financing led by Meituan; WM Motors is also on going its USD 1 billion Series D funding.

In addition, the government released favorable policies this March, including extending the purchase subsidy and purchase tax exemption for NEVs by two years and encouraging the elimination of diesel trucks with national emission standards no. 3 or below in the Beijing-Tianjin-Hebei region and other key areas. The policy benefits are not only great news for the new forces but have also inspired investors to continue to support the business.

But their support is not blind. Among the five investments with a total value of CNY 6.4 billion that occurred in neo-automaking industry in the first half of 2020, the four tier-one players account for four. This is in contrast with last year’s eight investments totaling CNY 22.6 billion occurring in the same period. Enough of such craziness, seems to be the consensus; the market is getting smarter on its bets by putting money on the top players.

While the top four Chinese new forces are gaining positive growth in sales and from the market, they are still failing to make a profit and are falling behind international competitors such as Tesla on NEV production and sales.

Tesla China's new version of the Model 3 was released in May in response to the new 2020 NEV subsidy policy that came out in March. The pre-subsidy price of CNY 323,800 is down to CNY 291,800. Along with the acceleration of localization and the development of new-energy batteries, Tesla's price advantage will gradually come to the fore, which will have an impact on the sales of domestic NEVs. The sales of Model 3 exceeded 10,000 units twice in the first half of 2020. 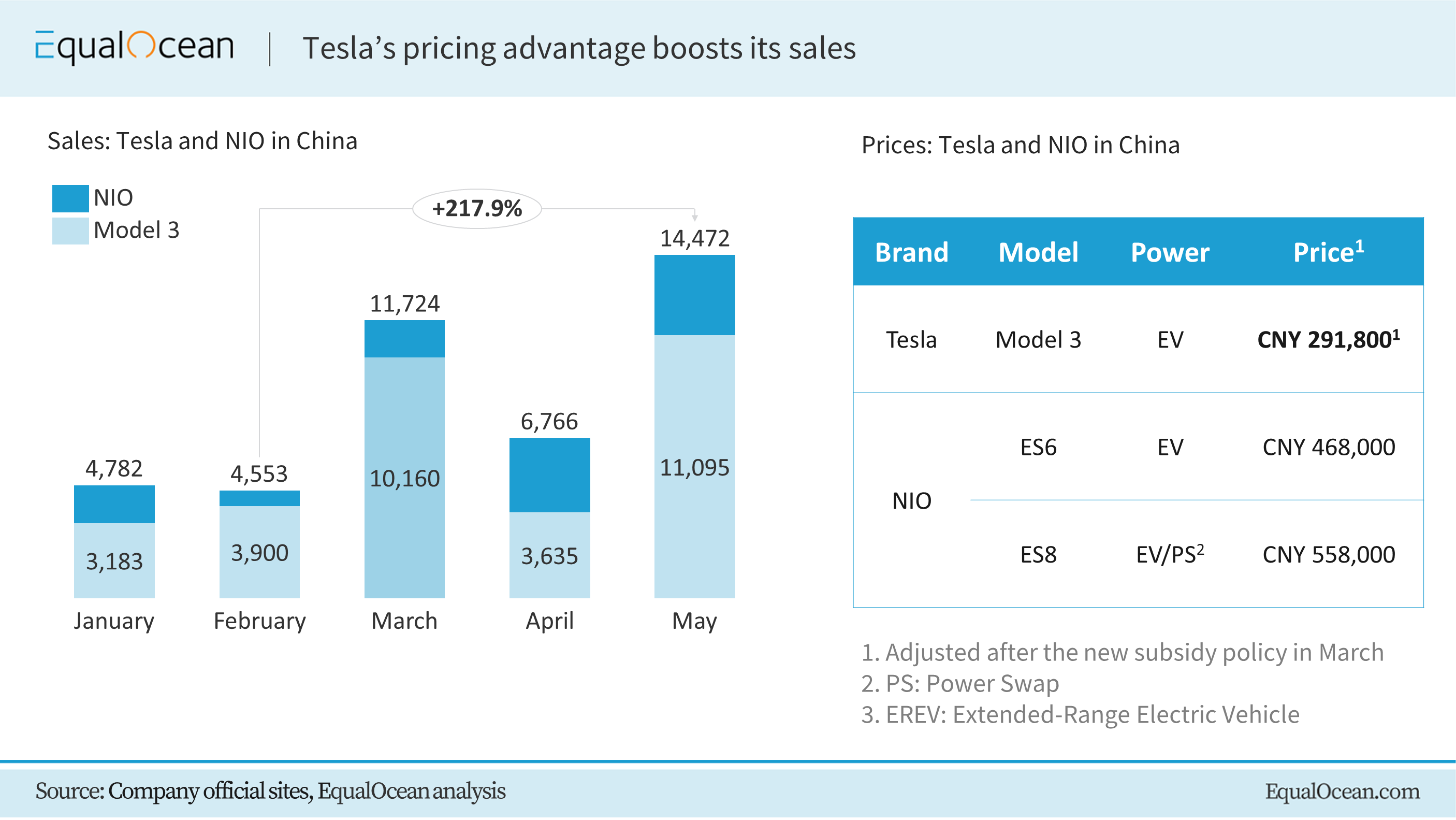 The high-cost dilemma faced by the new forces is not likely to be solved soon. According to NIO’s quarterly report, the company posted a net loss of USD 1,691.8 million in the first quarter, with just USD 2.4 billion in cash reserves on the books. Ongoing losses at the current rate and the cash reserves won’t allow the company to sustain two such quarters of losses. Though the CEO is confident that the company will achieve 5% of the gross profit margin by the end of the second quarter, the rate remained minus in the first quarter. And that is the situation all the new forces are facing.

For the new forces, in addition to ensuring that vehicles are delivered properly off the assembly line, the next step for them to achieve real profitability is to boost the mass production of NEVs. Tesla kept losing money for six years in a row until its best-selling Model 3 realized mass production (100,000 units per year).

Under the pressure of high expectations from the market and dominant sales records from their international competitors, China’s tier-one new forces have no choice but to speed up commercializing their models with lower prices while competing with their tough domestic competitors. What can be determined is that, after the large sums of money concentrated in the tier-one players, the market will begin to look for results very soon.