In a recent boom in the Chinese A-share market, the medical device segment has shown a surprising performance, proving its investability and growth potential. 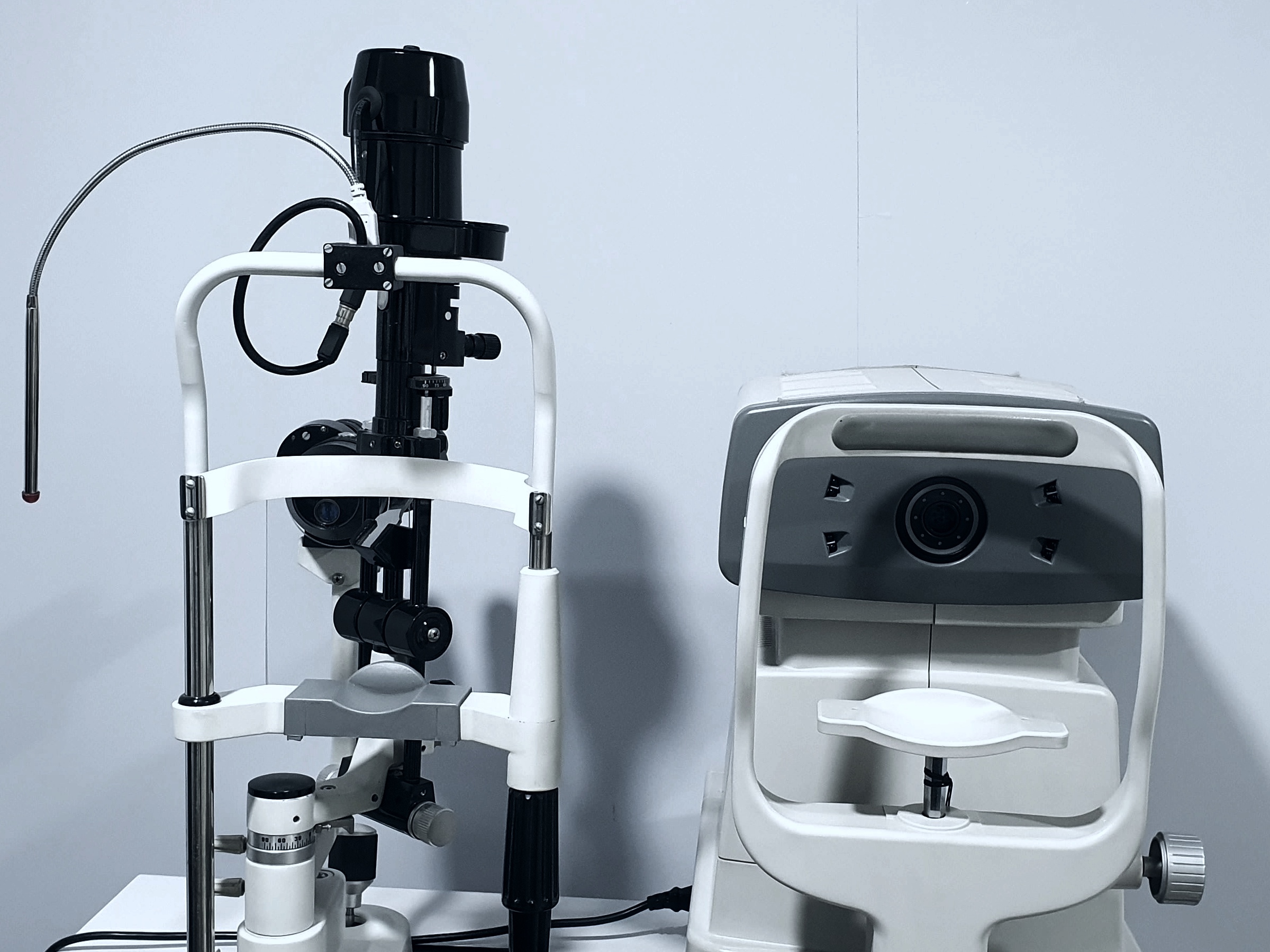 ► Mindray Medical has the highest market cap but is too big to keep R&D-driven.

The Chinese A-share market is experiencing a boom, with a record deal value amount at over CNY 1.5 trillion within four trading days. This craze surely has a powerful impact on the medical devices field – a fast-growing business.

The medical device industry in China sped up only in recent years due to substantial capital injections, advanced technologies and supportive policies. The current premature stage indicates much potential for growth soon and the exciting emergence of new high-tech companies.

A glance at top 10 Chinese medical devices by market cap

Here, the top 10 Chinese medical device companies are mentioned, to provide a brief look into local benchmarks in the industry. Some companies have been steadily operating for over 20 years and are recently moving into a new growth stage or reorienting in unprecedented directions due to fierce market competition. Some younger companies have quickly found their value position by advanced resource-upgrading throughout the industry chain. 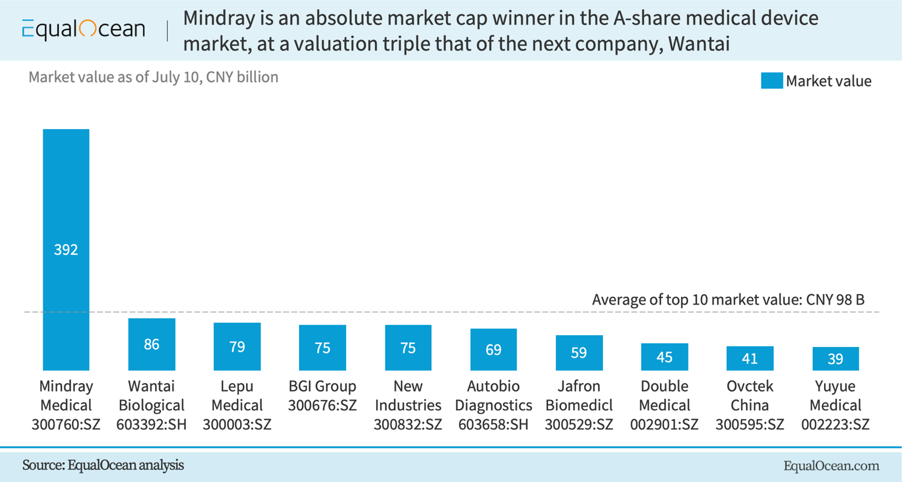 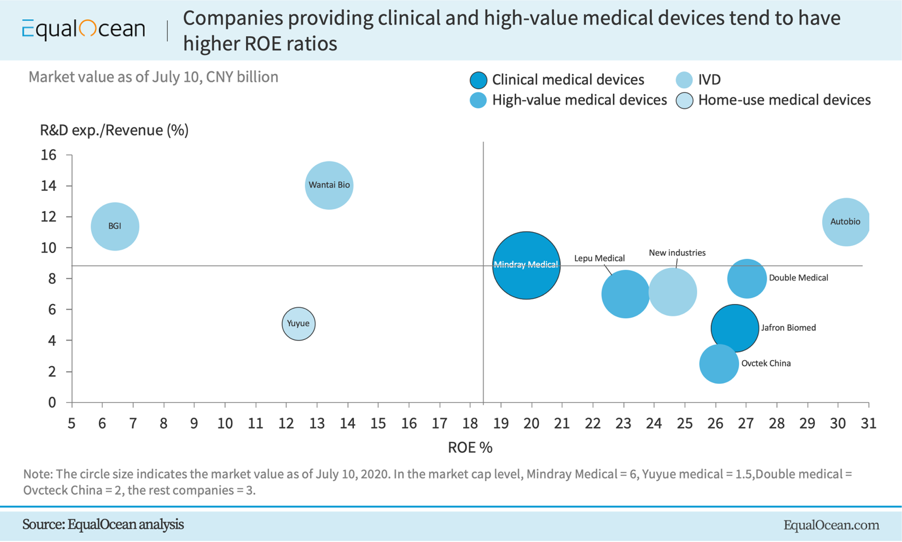 Based on a general overview of the top ten companies, some companies stand out from the rest. Besides Mindray (300760:SZ), which has the highest market cap, Yuyue Medical (002223:SZ) at 10th position is the only listed home-use medical device company in the top-ten market cap rank.

Mindray: too big to sprint

Mindray, the champion company, stands at the top position with an unbeatable valuation of over CNY 380 billion. As suggested by EqualOcean’s fundamental analysis, the company has come this far through frequent acquisitions and strengthening regional distribution channels. The conglomerate provides equipment in life information and support, IVD (in vitro diagnosis) and medical imaging. These three major businesses have been hot picks since the outbreak of COVID-19.

However, the conglomerate relies more on the robust R&D foundation and strong global selling network.  When a company gets bigger, the slower the giant grows – an aspect especially indicated by the R&D efficiency. 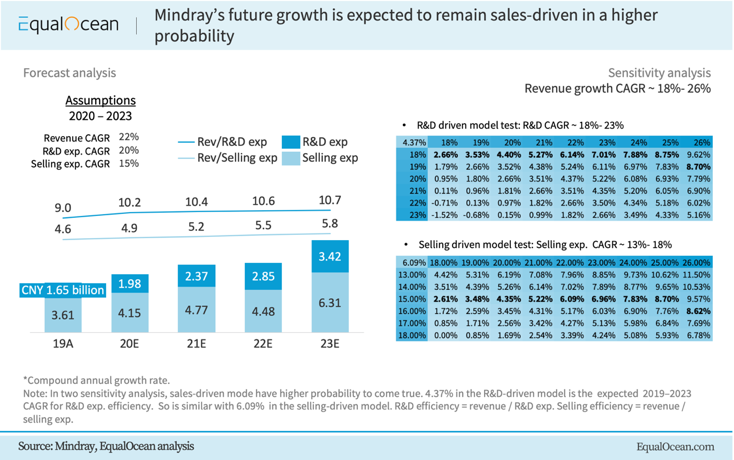 Even though Yuyue medical is ranked 10th in the top ten list, it is the champion company in the home-use medical device segment. One advantage for companies in this segment is that they have more flexibility in selling strategies because they provide end consumers with small medical gadgets, from sphygmomanometers to glucose meters, massage devices, etc.

As a previous EqualOcean analysis said, they can not only invest in developing their technology (R & D) but also seek a new growth direction as they shift to a more efficient selling strategy. This is exactly what Yuyue has been trying and will continue to try in the near future.

The COVID-19 crisis has created a mania for home healthcare. Yuyue has spared no effort in utilizing this trend. It has been cooperating with the two most prominent e-commerce platforms in China,  Taobao and JD.com. Now the online vendor has an over 1.13 million followers on the Taobao platform alone, with an over 480 thousand sales record of one single SKU (Stock Keeping Unit) – a household digital manometer. 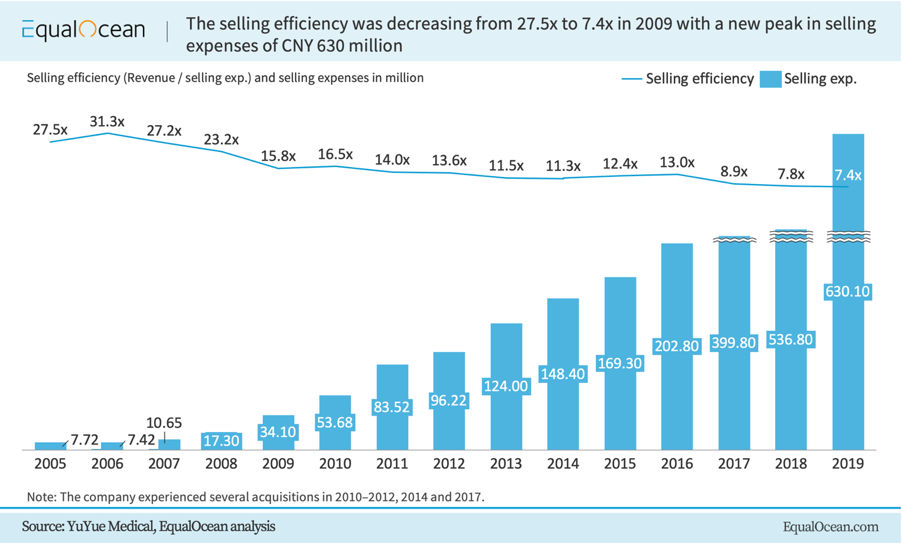