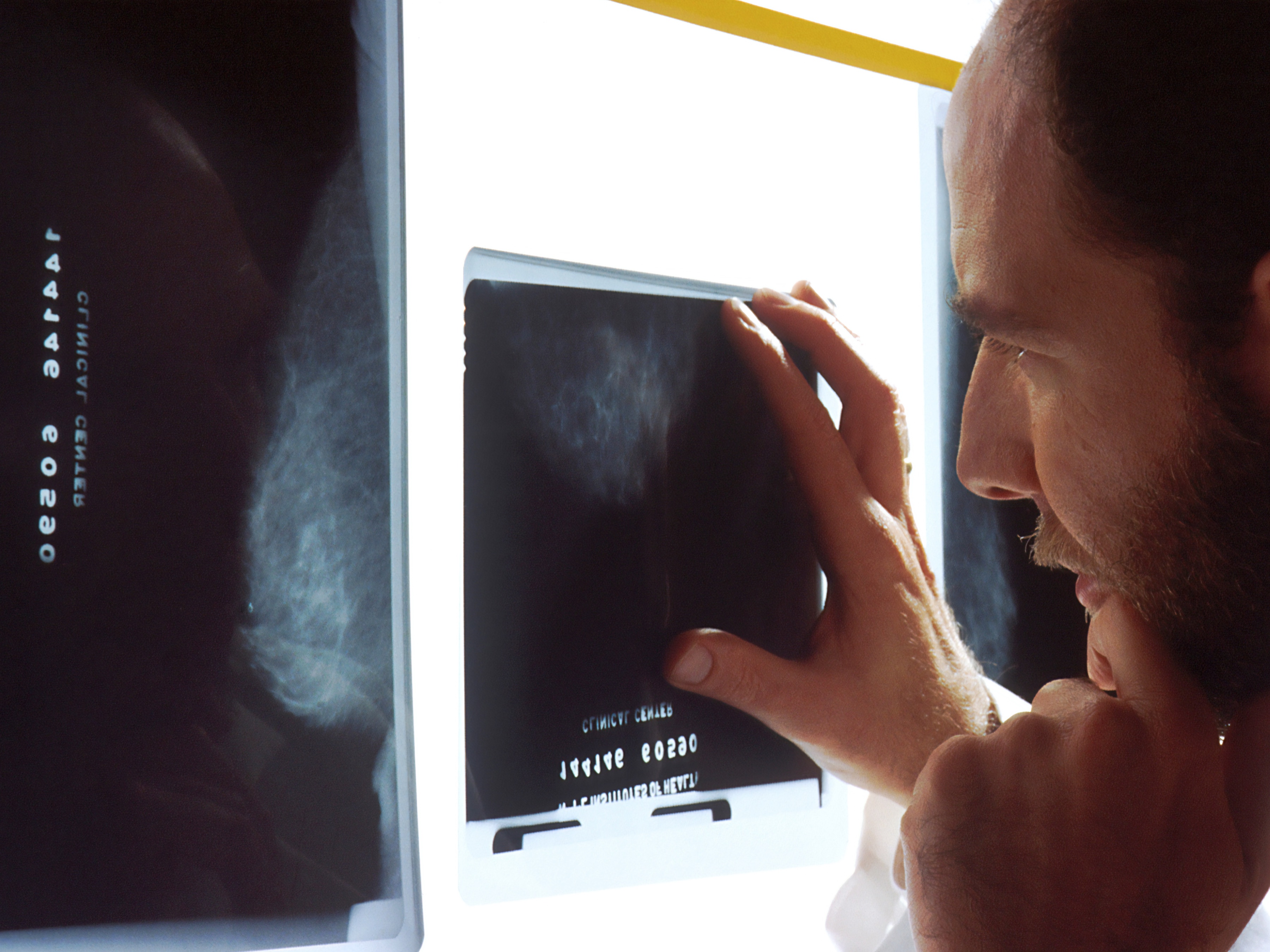 ► The biggest Chinese CT provider is about to hit the Star Market.
► Compared to its peers, Neusoft Medical has a lot to do in terms of R&D and selling model.

According to the prospectus, Neusoft Medical plans to utilize the raised funds to facilitate research projects for the core products, technology and equipment and establish distribution channels, boost brand development and training systems.

To be listed on the Star Market, the company picked the listing rule that the estimated market value shall be over CNY 1 billion and the net profit of the last year higher than CNY 100 million. Neusoft Medical’s prospectus discloses that its net profits were CNY 11.68 million, CNY 82.76 million and CNY 35.13 million from 2017 to 2019. However, it still faces the risk of IPO failure – if the market value at the issuance date does not reach the IPO requirement (over CNY 1 billion).

Known as one of the few medical equipment providers that owns comprehensive imaging and diagnostics equipment, Neusoft Medical has expanded its business to over 100 countries and regions, including over 80 markets in the coverage of the One Belt One Road project.

Since 2017, the company has developed a more balanced business structure, as the digital medical diagnostic equipment business represented a fallen share from 74.82% in 2017 to 65% in 2019. Meanwhile, the equipment service and training business has been growing – from 16.82% in 2017 to 25.20% in 2019 – which indicates it is more focused on establishing a long-term customer relationship.

The National Medical Products Administration shows that the Chinese medical device companies amounted to 18,699 in 2018 from 16,169 in 2014, at a CAGR of 3.7%. Faced with fierce competition from foreign peers in terms of product technology and service quality, Chinese players need to find their niche competitiveness.

Neusoft Medical engages in an extensive range of digital imaging equipment,  supplementing activities with compatible post-sale services. With substantial industry experience in CT equipment, now it has become the most prominent Chinese manufacturer in this field. As of the end of 2019, the company and its subsidiaries had delivered all kinds of medical diagnostic equipment for over 38.000 units. 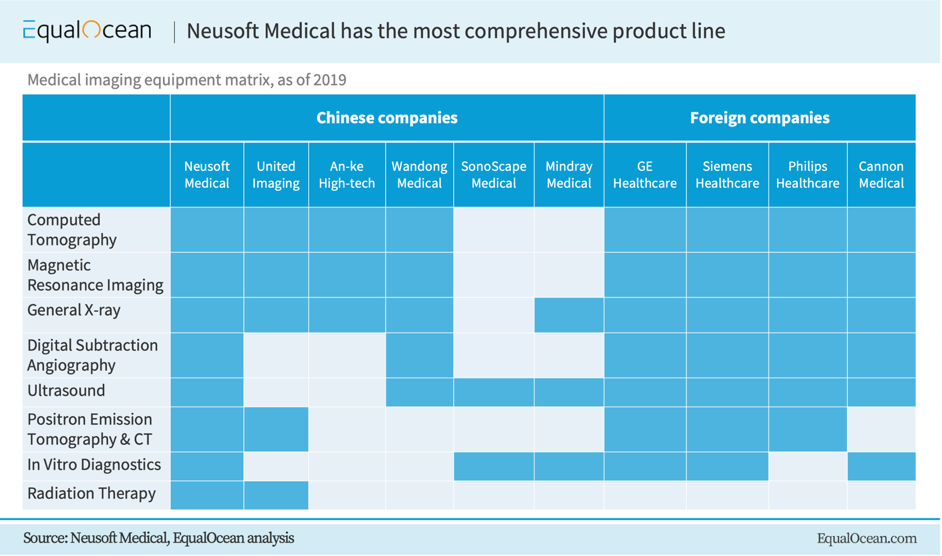 According to the company's prospectus, there are a total of nine competitors Neusoft Medical is directly facing, including four foreign players and five Chinese brands. A clear advantage is that Neusoft has the most comprehensive portfolio, with eight product lines, while none of the other Chinese companies can do that. GE Medical and Siemens medical are the only two most similar in terms of the product coverage – indeed, they represent a combined 53.5 % Chinese market share of the CT scanners. 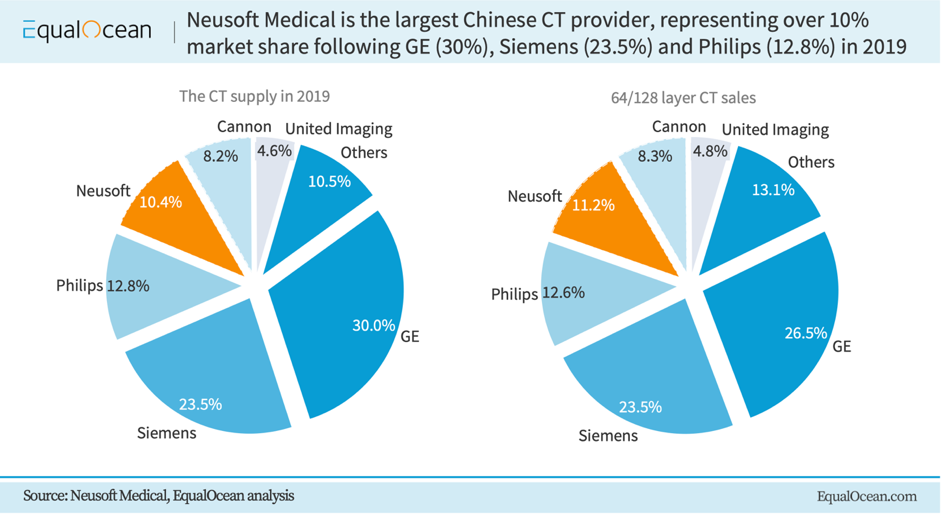 When it comes to the topic of investability, Neusoft Medical can be compared with three Chinese public companies – Wandong Medical (600055:SH), Mindray Medical (300760:SZ) and SonoScape Medical (300633:SZ).

In terms of the selling expense ratio over total revenue, the last three years saw a general trend in Wandong, Mindray and Neusoft, except SonoScape, which grew over 5%. 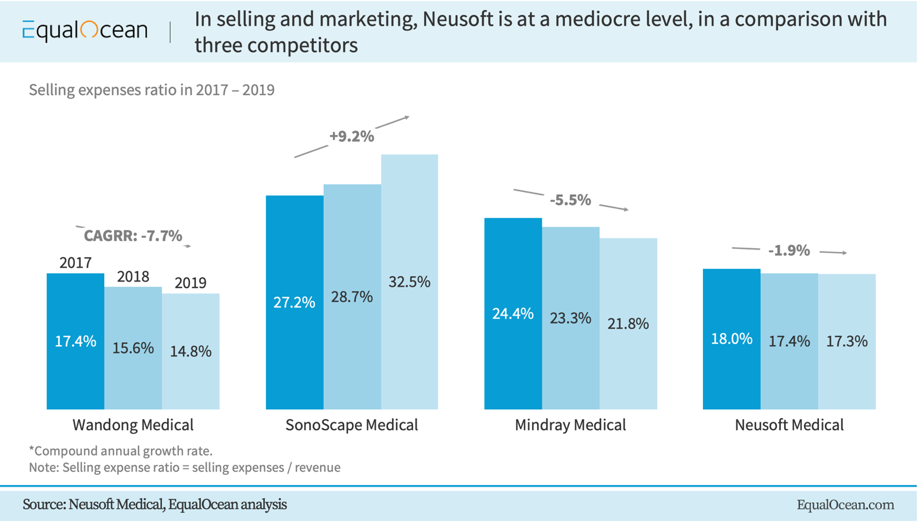 As for the R&D investment, Neusoft had the highest ratio against the revenue, as high as 22.03%, a nearly doubled rate of the industry average. The most expensive medical device company Mindray Medical only had 10.13%, and SonoScape and Wandong Medical have 19.18% and 8.14% each.

However, to have a better understanding of this ratio, it is crucial to reference the other two perspectives, R&D capitalization and pipeline diversity.

During the last three years, Neusoft has maintained an R&D capitalization rate of approximately 12% – 14%, while recording an expense ratio of 8.5% – 11%. An increase in the capitalization R&D indicates higher efficiency in converting R&D input into potentially profitable assets. 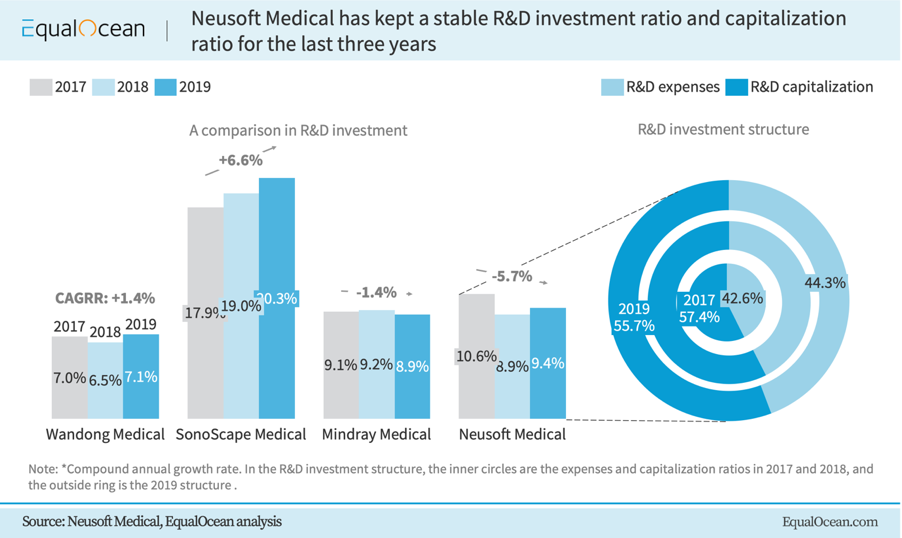 The long path after the public debut

There is a long path ahead of Neusoft Medical. Maybe in the long-term future, Neusoft may take on an expansion path similar to Mindray, which spent the first few years acquiring growing companies inbound and outbound. 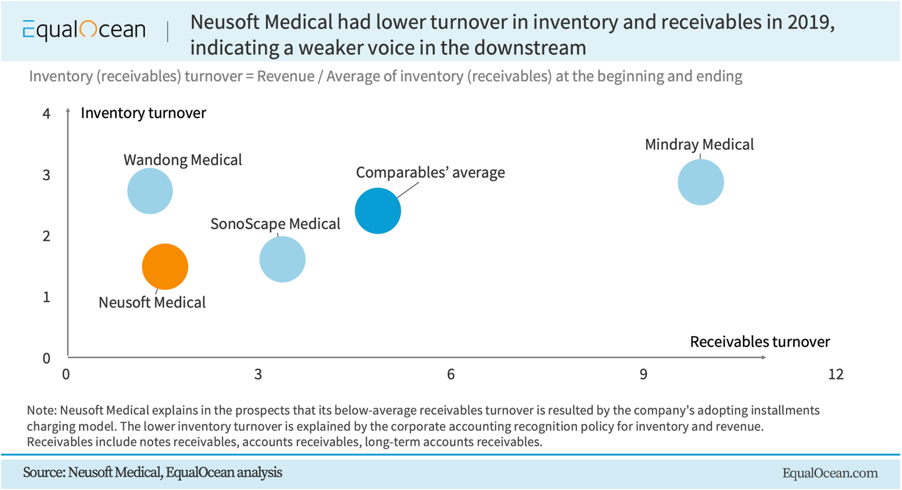 More than that, it also faces risks from bad debts. It recorded a loss of CNY 6.96 million in the failure of collecting accounts receivables. In 2019, Neusoft had lower receivables turnover 1.54x than the average of the three comparables mentioned above:  Wandong Medical 1.31x, SonoScape 3.37x and Mindray 9.89x. Even though the company explains that this is because Neusoft adopts an installment-charging mode, the considerable gap indicates that it has a relatively weaker voice in the downstream distribution side.