JCET and SMIC: Together Through Thick and Thin

Can the packaging and testing provider evolve into an ‘ASE of the mainland’ by cooperating with the infamous foundry? 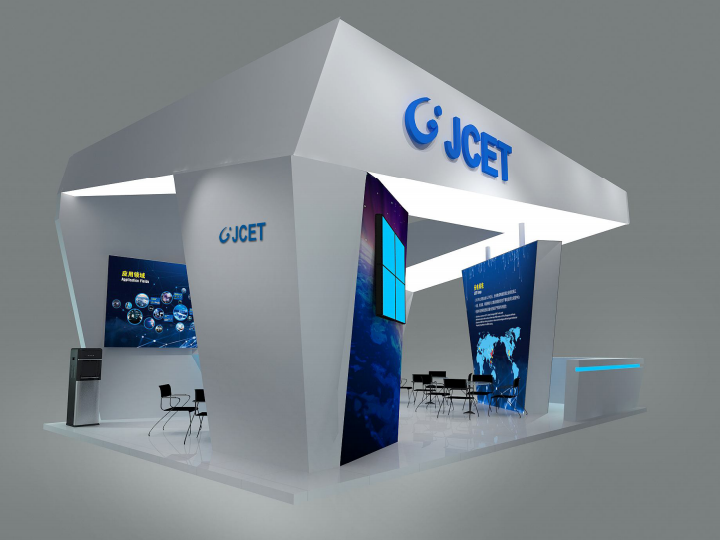 ► SMIC’s Star Market IPO is a welcome fillip to the mainland’s semiconductor companies.
► JCET will benefit directly from the development of SMIC.
► While the company’s low-price strategy has been relatively effective,  it cannot be successful forever, due to ever-shrinking margins.

Since China’s largest foundry – SMIC (688981:SH, 00981:HKEX) – submitted its prospectus on the Shanghai bourse’s Science and Technology Innovation Board on June 1, it has initiated a heated discussion. On July 16, SMIC kicked off trading on the Star Market, and its stock price increased 180.63% within just one day.

There are three main steps in the semiconductor value chain: design, manufacturing packaging and testing. EqualOcean has talked about some of China’s ‘champions’ involved in the first two, like NOR flash memory and MCU chip designer GigaDevice (603986:SH) and SMIC (00981:HKEX, 688981:SH). We will introduce a company operating within the third stage in this article by analyzing the largest player in Chinese mainland – Jiangsu Changjiang Electronics Technology (JCET, 600584:SH).

For packaging and testing companies, it’s better to set factories closer to customers, including foundries, fabless and integrated device manufacturers (IDMs) to reduce transportation costs and other related expenses. Meanwhile, major foundries are also motivated to move into the packaging and testing field. For instance, TSMC plans to invest USD 10.10 billion in high-end integrated circuit (IC) packaging and testing services this year and the plant is expected to start operation in the middle of next year, but the company has been in this field since 2016.

The same goes for SMIC, which has a close relationship with JCET. In 2017, SMIC became the shareholder of JCET, owning 14.28% of total shares, and directors of SMIC play the same role in JCET – like Zhou Zixue (周子学), the chairman of the two companies.

Founded in 1972, JCET acquired (in Chinese) STATS ChipPAC in 2015, which was the fourth-largest Outstanding Semiconductor Assembly and Test (OSAT) company in the globe.

According to TrendForce’s data, in the first quarter of 2020, JCET occupied a 13.8% market share, ranking third after Taiwanese maverick ASE and Arizona-based Amkor (AMKR:NASDAQ), the market shares of which in the same period were 23% and 19.50% respectively. It is worth noting that on February 12, 2018, ASE Technology Holding (ASX:NYSE, 3711:TW) acquired 100% of shares of both ASE and SPIL, which used to be the second-largest OSAT in Taiwan and rank the fourth globally.

As it is illustrated in the chart below, companies owning more kinds of packaging techniques tend to achieve higher market share. 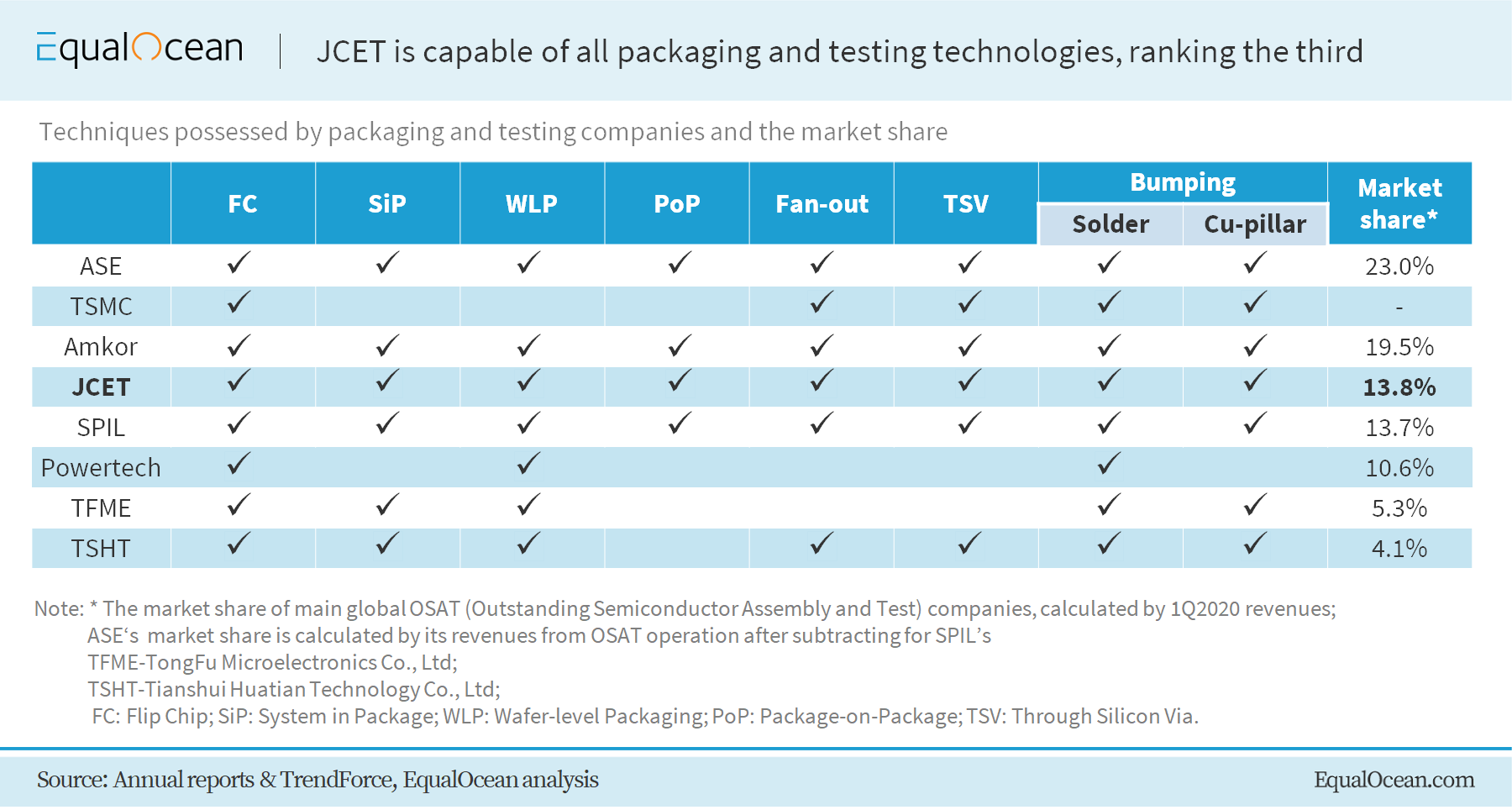 Looking into the table above, it seems that there is no difference among ASE, Amkor and JCET in terms of packaging and testing techniques. Then how can ASE (ASE Technology Holding) achieve around 34% of market share?

In addition, when comparing gross profit margin and revenues among three companies, we find that the gross profit margin of the industry is low, and JCET is lower than the two competitors, but the difference is less than the past few years, which became around 5% in 2019. In terms of revenues, the gap between ASE and the other two parties keeps increasing, up to CNY 63.40 billion and CNY 68.90 billion in 2019. 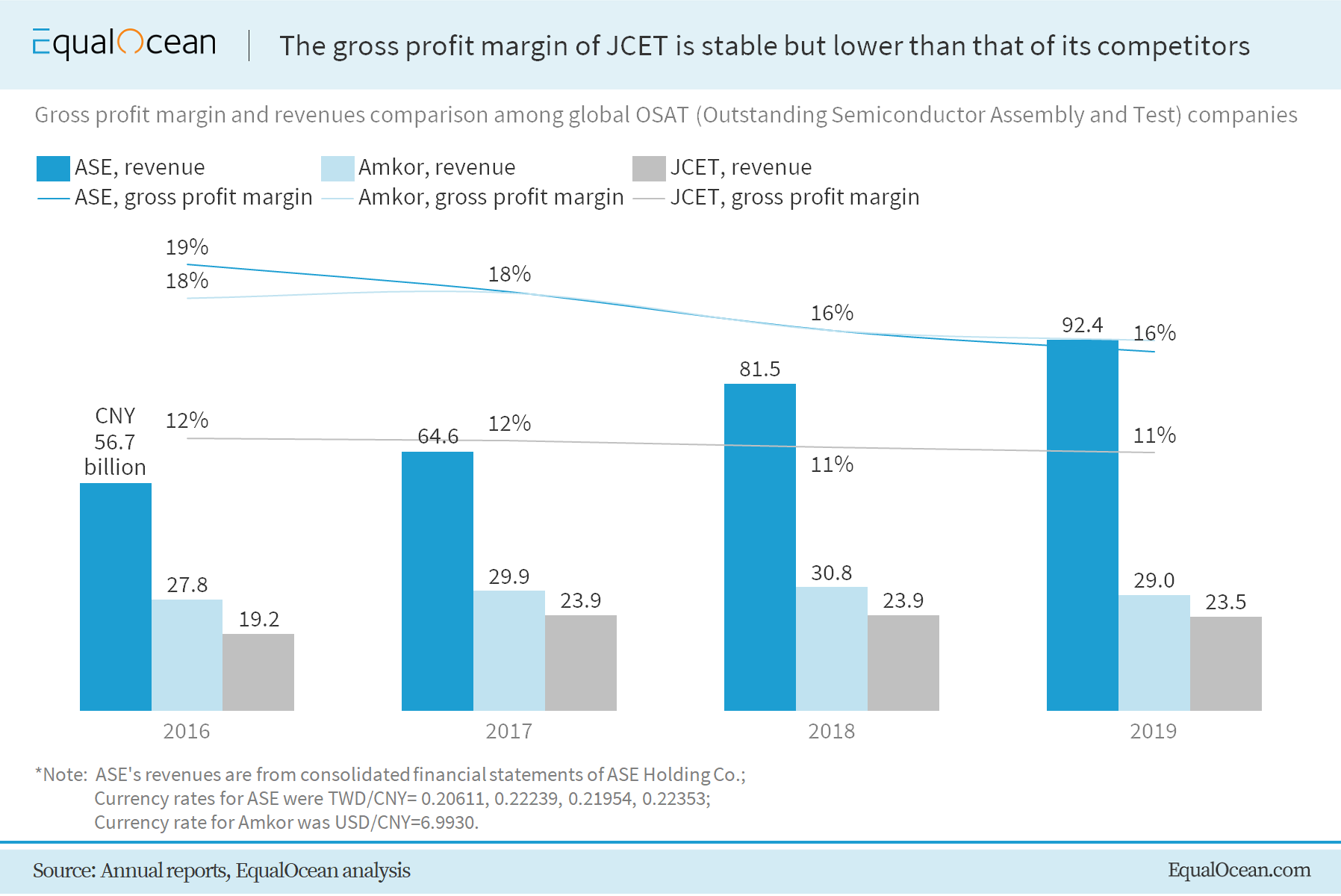 As the difference between Amkor and JCET in terms of revenues is insignificant, it is important to dig into ASE’s business to figure out the reasons for JCET lagging behind it, in addition to the acquisition of SPIL in 2018:

1) ASE enjoyed geographic advantages at the very beginning. TSMC (TSM:NYSE, 2330:TWSE), the largest and most advanced foundry, is headquartered in Taiwan. On one hand, it is easy for ASE to get orders from TSMC and its customers.
On the other hand, ASE has formed good relationships with local customers, accumulating sufficient experiences of IC designers’ demands on packaging and testing. Besides, customers will spend a lot of time and extra costs if changing plants, so they typically select multiple vendors, or one specific vendor while an alternative one is available.

2) ASE’s production bases and the main sales market highly coincide. According to the 2018 annual report, revenues from the United States, Taiwan, Asia and Europe accounted for 62.2%, 12.3%, 15.1%, 9.9% of total operating income, and its production bases are located in these countries.

Having obtained a brief overview of the advantages of ASE, let’s go deep into the revenue structure of JCET and have a look at whether it can catch up with ASE. 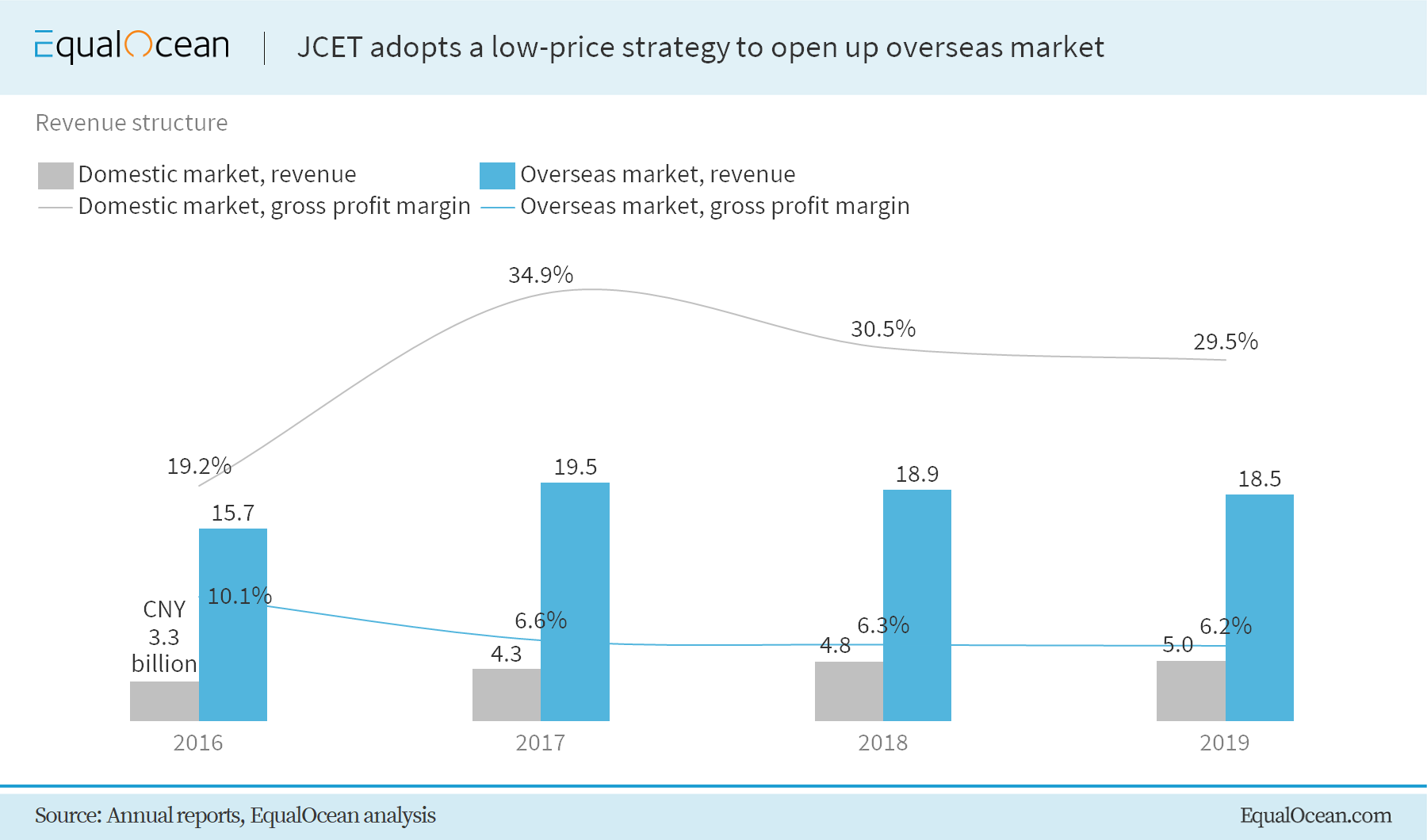 As gross profit margin measures pricing power, we think that JCET is adopting the low-price strategy in the overseas market, which is effective but not the most attractive option, and will not last forever. How then to improve?

Watching three advantages of ASE mentioned above, we can find the direction:

JCET can rely on SMIC. ASE can develop with the help of TSMC, and so can JCET. SMIC realized the volume production of 14nm at the end of 2019, receiving orders from Huawei at the same time. Although it cannot serve Huawei, it will get orders from other fabless firms because it is the most advanced foundry in the Chinese mainland.

With the development of SMIC, JCET will reach a more competitive position, with a higher market share in the future. And under the United States’ bans on Chinese technology companies, the government has launched support policies and increased investment in the domestic semiconductor industry.

Therefore, JCET can get money from the government, in addition to increasing its own income, and R&D expenditures will rise, helping the company improve packaging and test technologies.

Besides, China, in some ways, has pioneered 5G and encouraged the development of its AI industry. More semiconductor companies will emerge – at the same time, demands on IC manufacturing, packaging and testing will increase.

Fostered by the state, China's semiconductor companies are entering the stage of full-fledged development. A huge number of opportunities are emerging for JCET, which should strive to miss none.