Baidu: Up or Down?

Today is not the best time for Baidu, but it could be a good time for investors. 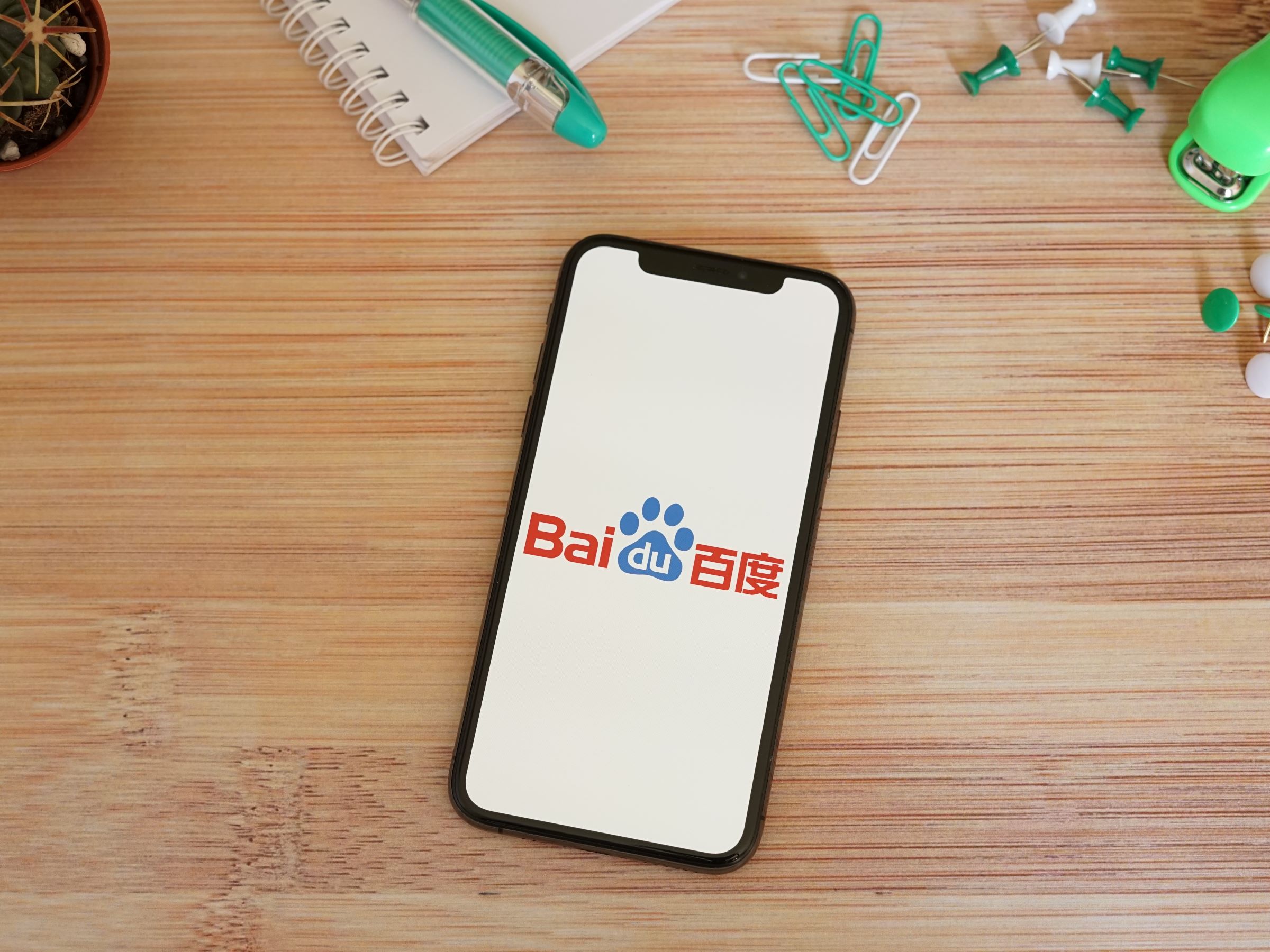 Owner of the most popular search engine, Baidu was once one of the biggest Internet companies in China. However, over the last three years, the stock price of Baidu has decreased by 50% as competition in the digital market has become fiercer and more diversified. Currently, rumors suggest that Baidu is no longer one of the most valuable internet companies in China. Overall, the value of a company is not just determined by its stock value but also could be decided by macro-environment, strategic plan and any other related factors.

What kind of company should Baidu be defined as?

Firstly, from the perspective of services and products, Baidu is still a tech giant. Baidu is a technology and Internet service provider for people, businesses, and communities. It has a wide range of products and services from information search to community services which have guaranteed Baidu has a diversified business background thus making it possible for Baidu to minimize risks. 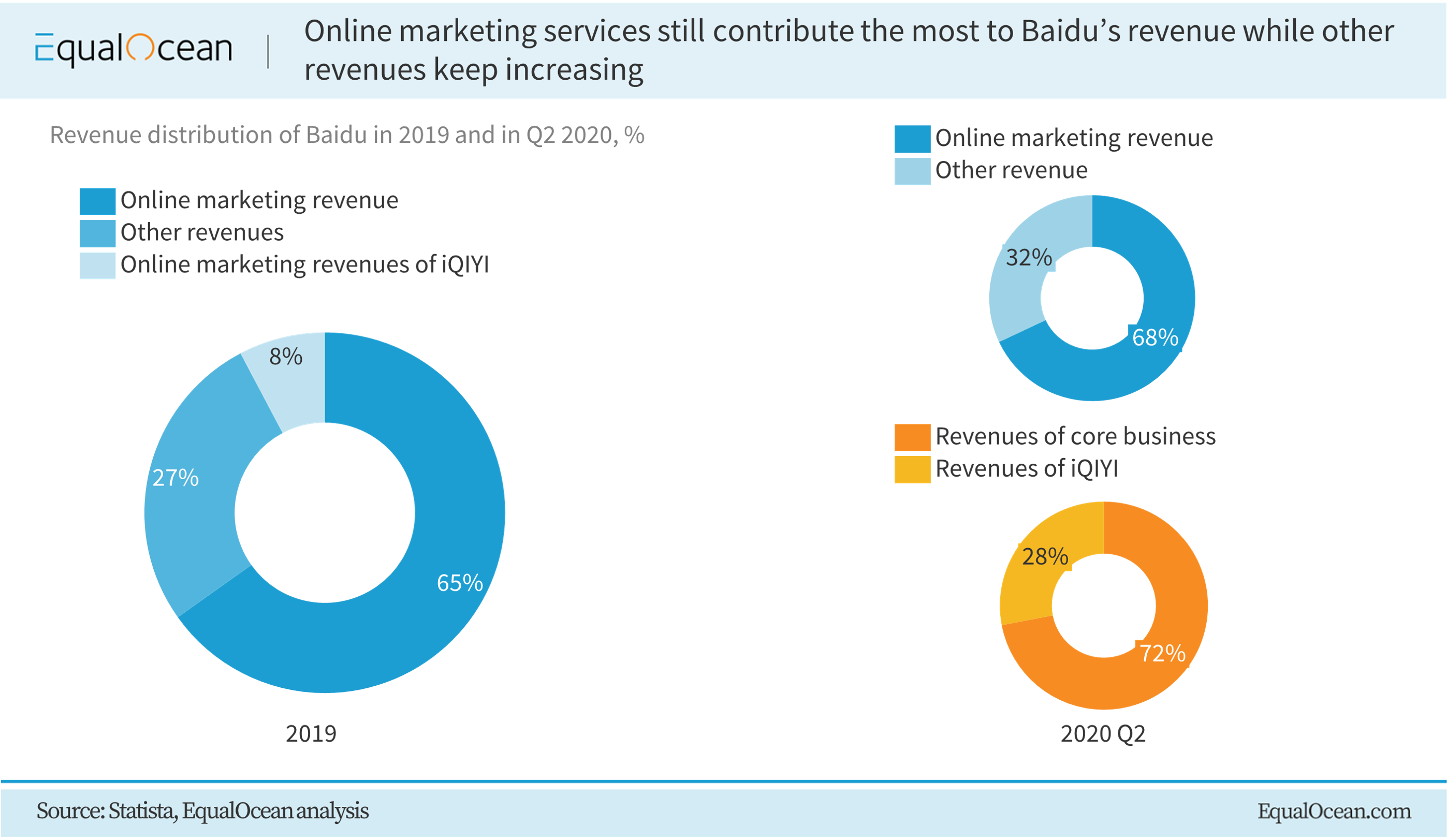 The good thing about Baidu's revenue is that it is still going up in general,  as we can see from the following chart which reveals that Baidu's revenue has been risen for over 10 years. Although the pandemic made Baidu's revenue in Q1 2020 decline, it has shown a recovery trend as all things began to calm down. 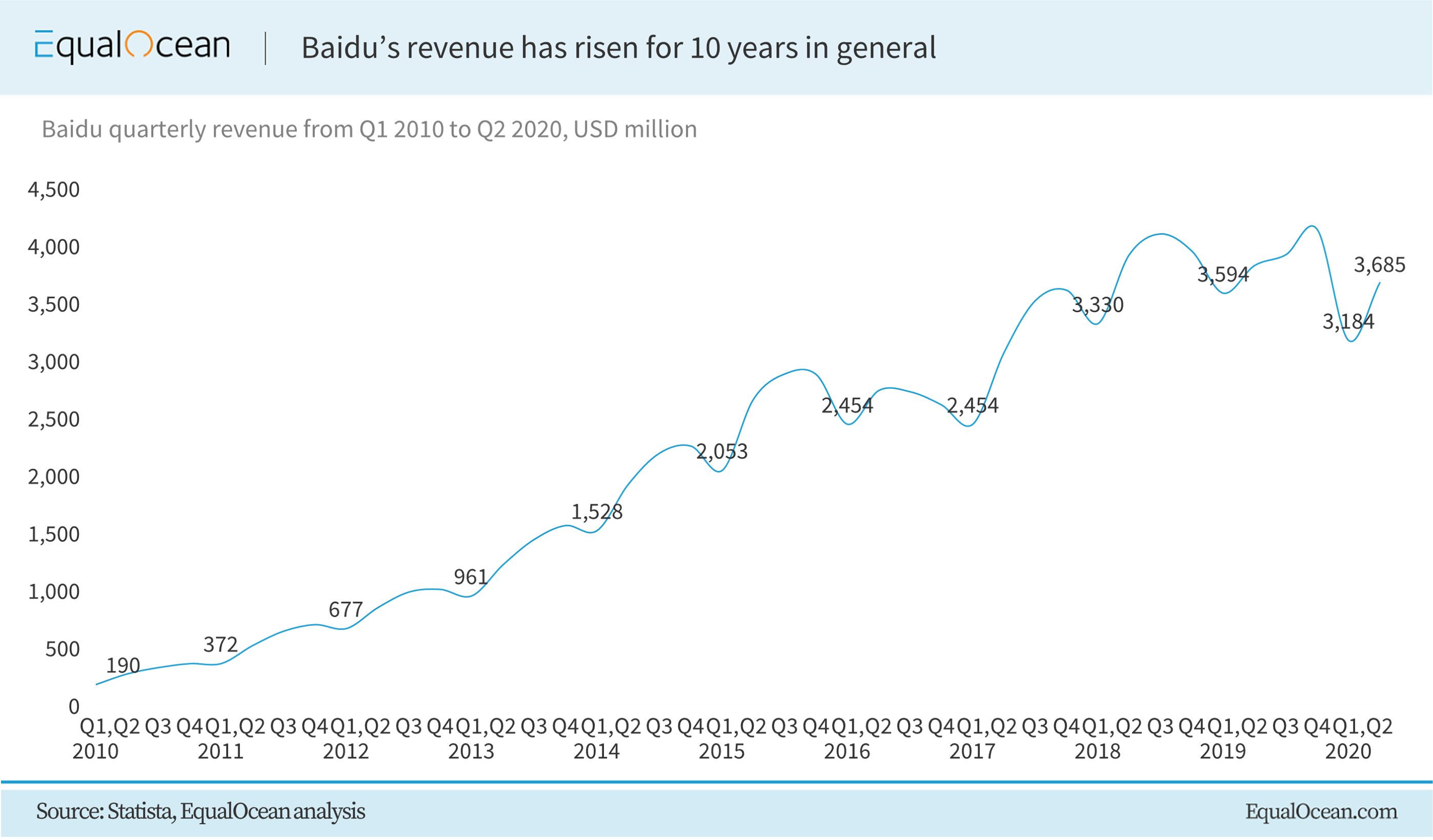 In terms of the demographic features of mobile search engine users, most users of Baidu show that Baidu is a company that does face younger generations; this could lead Baidu to a higher prediction of revenue growth in the near future with more young people becoming consumers.

In general, today is not the best time for Baidu – but it could be a good time for investors. With the upgrade of Baidu's services, it will possibly evolve into a platform that can provide more future-oriented opportunities and services.

As discussed above, Baidu's core business revenue is from online marketing services. However, this market has made it harder to generate more profits. Firstly, with multiple new media types in China, it has raised difficulties for Baidu to develop its advertisement business online. E-commerce advertisements and social media advertisements have steadily expanded their share in online advertisement revenue. The tech giants of these two industries are Alibaba and Tencent, which are two main competitors for Baidu. Also, there are also many other special advertising channels like live broadcasting and Uploaders (like YouTubers). 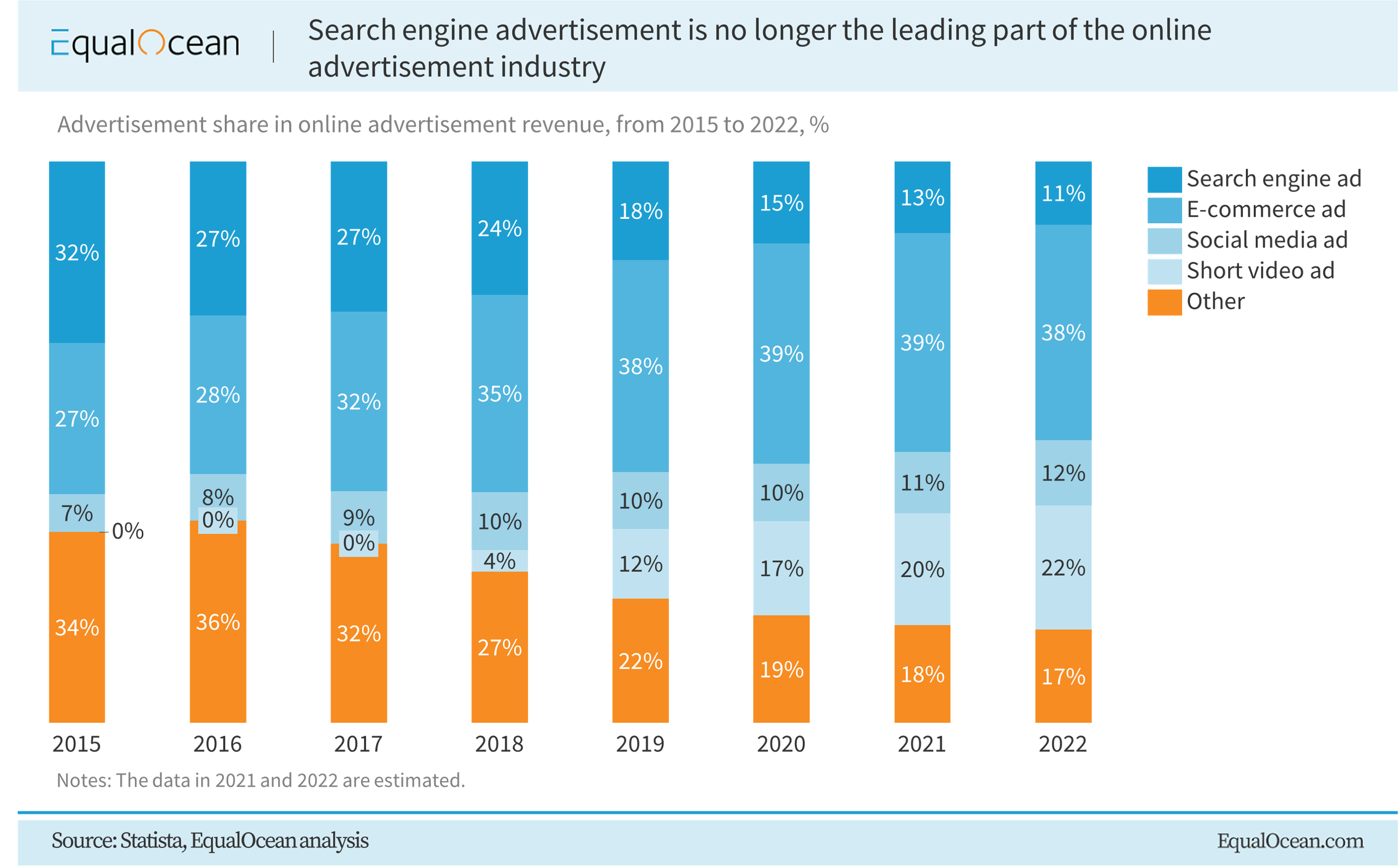 In terms of the search engine market, Baidu still dominates in China. In 2019, Baidu occupied 72.7% of the market. Also, compared with the P/E ratios of Google (34) and Sogou (57), Baidu's P/E ratio has reached 132 which shows the confidence of the search engine business in the company. As the economy recovers and the demand for advertising increases, Baidu is more likely to be the biggest winner in this market.

Baidu was also the first to nab a batch of L3 licenses to trial self-driving cars in Beijing, where Baidu is headquartered in and is the country's first city to allow such road tests. Robocars are now testing in more than 10 cities in China, including first-tier Beijing and Shanghai, as well as smaller urban centers like Changsha, where Baidu is working with the municipal government to bring 100 automated cabs to the city by the end of this year. This also shows that Baidu has a quite strong relationship with government which can apparently become an advantage for Baidu's future development.

In terms of industry position, Baidu Cloud is the third largest cloud computing service provider in China, behind by Tencent and Alibaba Cloud.

According to a report on China's public cloud service market released by Canalys, a British research firm, in the fourth quarter of 2019, Alibaba Cloud ranked first, with its market share rising to 46.4%. In the same period, Tencent's market share was 18%. Baidu Cloud ranked third with a share of 8.8%.

Moreover, with the decrease in the market share of AWS globally, Baidu Cloud will have the chance to expand its market share to some extent. It can be compared with the market value of Kingsoft Cloud Holdings which is USD 6.8 billion.

So far, Baidu's SLG (intelligent life business group) has generated revenue, but it does not disclose specific figures.

It shows that Baidu has become the top player in this market; the estimation of the sales revenue in this market is about USD 1.7 billion. Meanwhile, in the worldwide market, Baidu also plays an important role and accounts for 14% of the market. 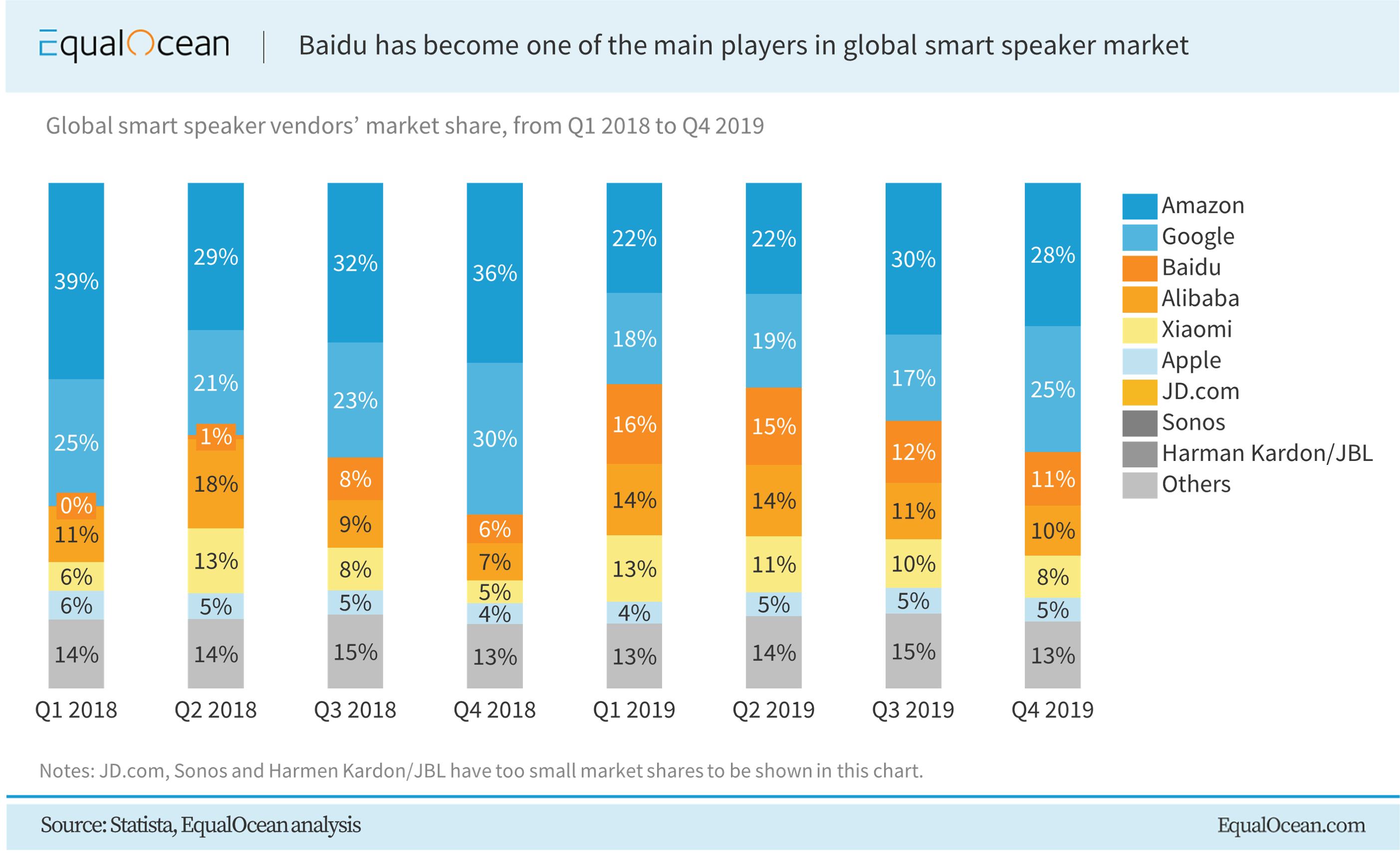 Besides the famous names, Baidu has equity investments in several other companies like NetEase Cloud Music which is under the control of NetEase Inc, and Mia.com which sells maternity and baby products. All of these companies could bring profits to Baidu.

Baidu's net loss in 2019 was CNY 2.29 billion which was lower than that of 2018 (CNY22.58 billion). Its revenue in 2019 increased to CNY107.41 billion. The main reasons for the losses included loss from equity investments. The operating cash flows were not bad and positive while the investing cash flows and financing cash flows were negative in 2019. This proved that Baidu still has a strong ability to operate effectively in its core business. However, Baidu does need more improvements in its investment profitability.

Based on the above, when advanced technology comes to commercial use, Baidu may become one of the most valuable tech firms again.