In 2019, around 46% of Apple's suppliers were Chinese companies or China-based factories. Not only do Chinese firms rely on Apple's sizable orders, but Apple also sees benefits from the country’s high cost-efficiency and growing innovation. 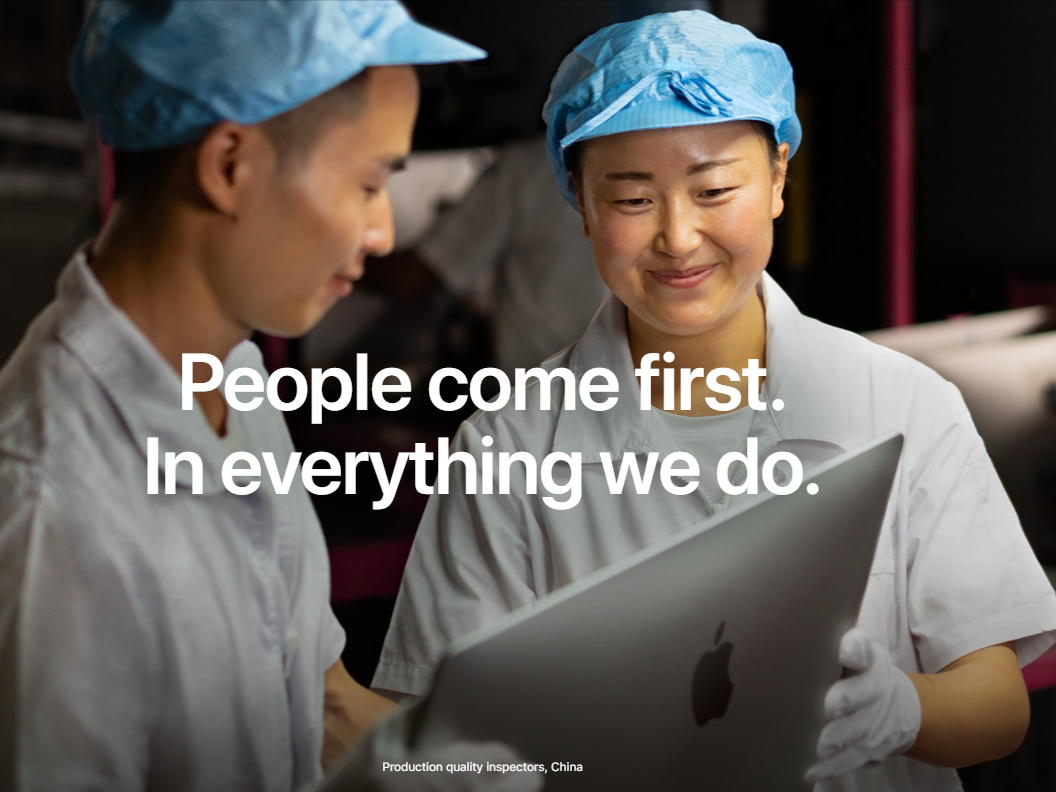 ► Over 380 suppliers to Apple in China cover almost every section of the American tech giant’s smartphone manufacturing industry chain: from expensive components, such as display panels and chip packaging services, to cheaper elements such as acoustic components and printed circuit boards.
► The Pearl River Delta and the Yangtze River Delta have the highest number of Apple suppliers and are the most technology-intensive regions.
► The central and Northern regions are relatively more labor-intensive locales within Apple’s value chain.
► The Chinese capital market is showing high confidence in firms lying in Apple’s upstream, presenting an average 112% price rise during the past 12 months.
► The bargaining power of Chinese Apple suppliers doesn’t seem to be significantly strong.
► We highlight local companies highly related to Apple’s business:  Luxshare Precision, Lens Technology and AAC Technologies.

Apple's (AAPL:NASDAQ) recent moves include encouraging Luxshare (002475:SZ), the 'next Foxconn', to expand its business by acquiring Wistron's (3231:TW) iPhone production lines and Cowell Electronics (01415:HK); these show the American tech titan's intention to deepen its network in the vast Chinese market.

As US-China tensions might obstruct the transactions between the two countries, the importance of the localized manufacturing of Apple products in China has been pushed to a new peak of significance. And the Chinese companies along Apple's value chain in return will be strongly related to the Apple products' market performance and the escalating geopolitical tension. Firms standing along the industry chain are all exposed to such risk.

Chinese firms are in most sectors of Apple's industry chain

Apple suppliers based in mainland China did not have a huge share in its upstream structure in 2019, with 19 out of the total 193 companies. Though the quantity of suppliers is not that considerable, the coverage is quite extensive in terms of component costs – running the length of the scale from the most expensive ones (cameras and touch panels) to the cheaper parts (batteries and audio components).

In the higher-valued components segment, China's Ofilm (002456:SH), which earlier acquired SONY's (SNE:NYSE) Chinese subsidiary Sony Electronics Huanan, is the supplier of camera models for iPhones and iPads. TechInsight reported that Apple's 2019 flagship iPhone 11 series are all built with SONY camera modules. Ofilm can be reasonably considered the Chinese representative of the Japanese company.

Another costly component of Apple products – display panels – also depends on Chinese firms as key suppliers. BOE Technology (000725:SH), as the supplier of one of Apple's strongest rivals (Huawei) is also paid by Apple as a supplier to restrict Samsung's (005930:KR) monopoly in Amoled display supply. Though the Amoled market is still largely occupied by the Korean company with around 80% of the total, BOE could expand and conduct better R&D with Apple's large volume of orders. Besides BOE, Ofilm and BIEL Crystal also stand in the high cost segment with glass lens offerings. 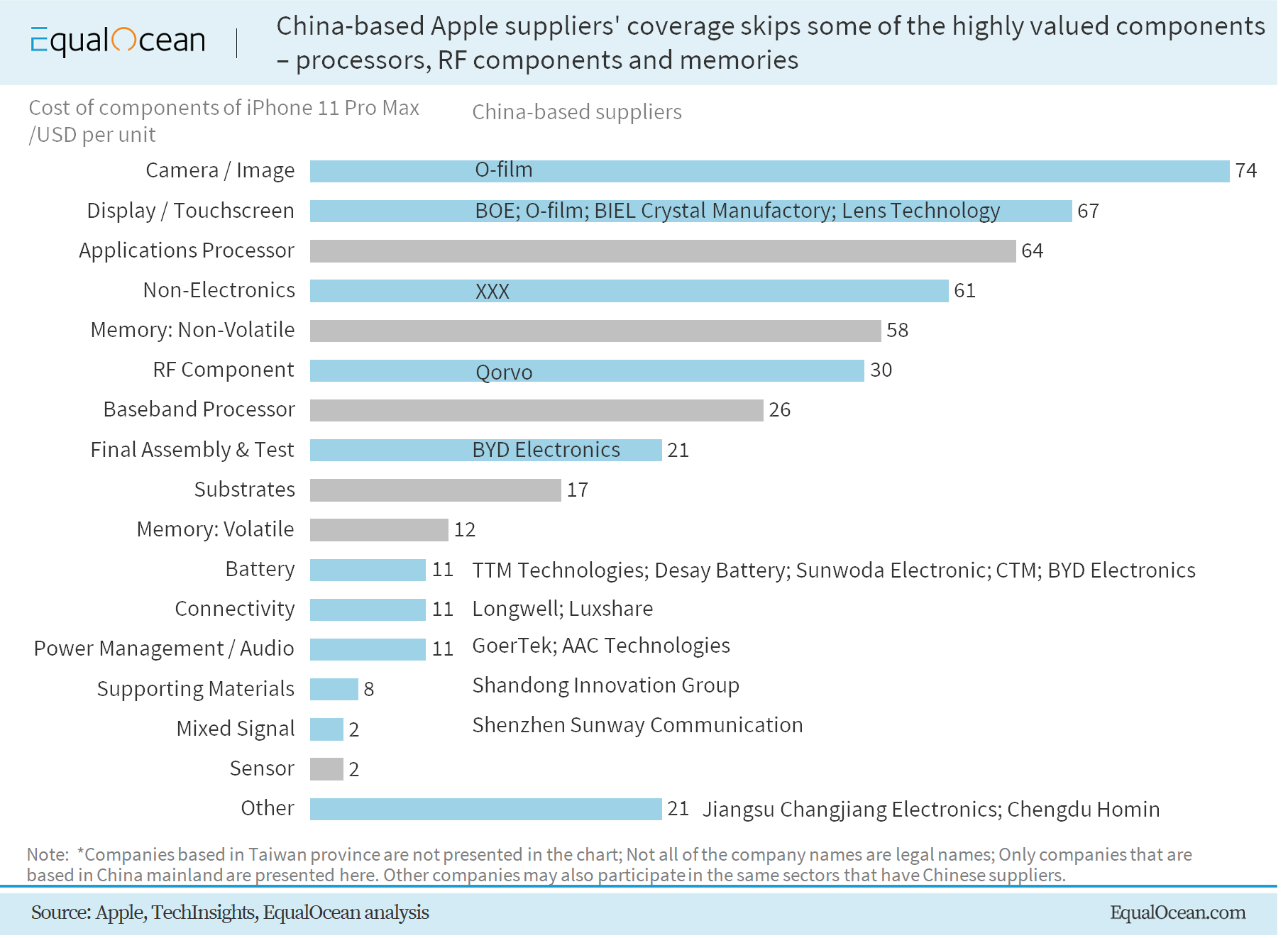 In the 'middle-cost' area lies BYD Electronics (00285:HK) which is responsible for the final assembly and testing. It is certain that BYD participated in the assembly procedures for the latest iPhone 11 Pro series – in fact, the company was once and will be in the iPad/iPod Touch assembly lines. Besides, with the recent acquisition of Wistron's iPhone production lines, China's Luxshare will be in the final assembly sector as well.

China-based firms are apparently more crowded in the lower-valued components, including batteries, connectors, audio components and other supporting materials. However, the lower cost of the product does not equal lower profitability. Take AAC technology (02018:HK) for example,  the acoustic components provider for Apple's AirPods and audio components in iPhones – their gross profit margin reached 29% in the fiscal year of 2019. As the market of true wireless stereos (TWS) and other IoT-concept consumer electronics blooms, a demand generally involving requirements for audio quality and long battery life, these companies may keep the rising trend for both market cap and the real earnings.

Where the mainland’s companies are absent among high-valued components is in the processors and memories sectors, which are currently dominated by US companies such as Apple and Qualcomm (QCOM:NASDAQ) and South Korean companies like Samsung and SK Hynix (000660:KR). Processors and memory as the key performance drivers for device up-grading; Chinese suppliers are not deeply engaged in these key components.

Among Apple's top 200 suppliers, which accounted for 98% of the total procurement expenditures for materials in 2019, 19 are based in the mainland of China, while 43 have headquarters in Taiwan. The coverage of Taiwanese suppliers is as broad as that of the mainland, but with better involvement of the higher-valued components – e.g. the chipset foundry business of TSMC (TSM:NYSE).

Though the Chinese companies (including Taiwan) only account for around 30% of companies' total numbers along Apple's supply chain, manufacturing branches /factories are more significant in quantity terms. Among 830 branches related to Apple products, 380 are based in mainland China, weighing in at around 46%. 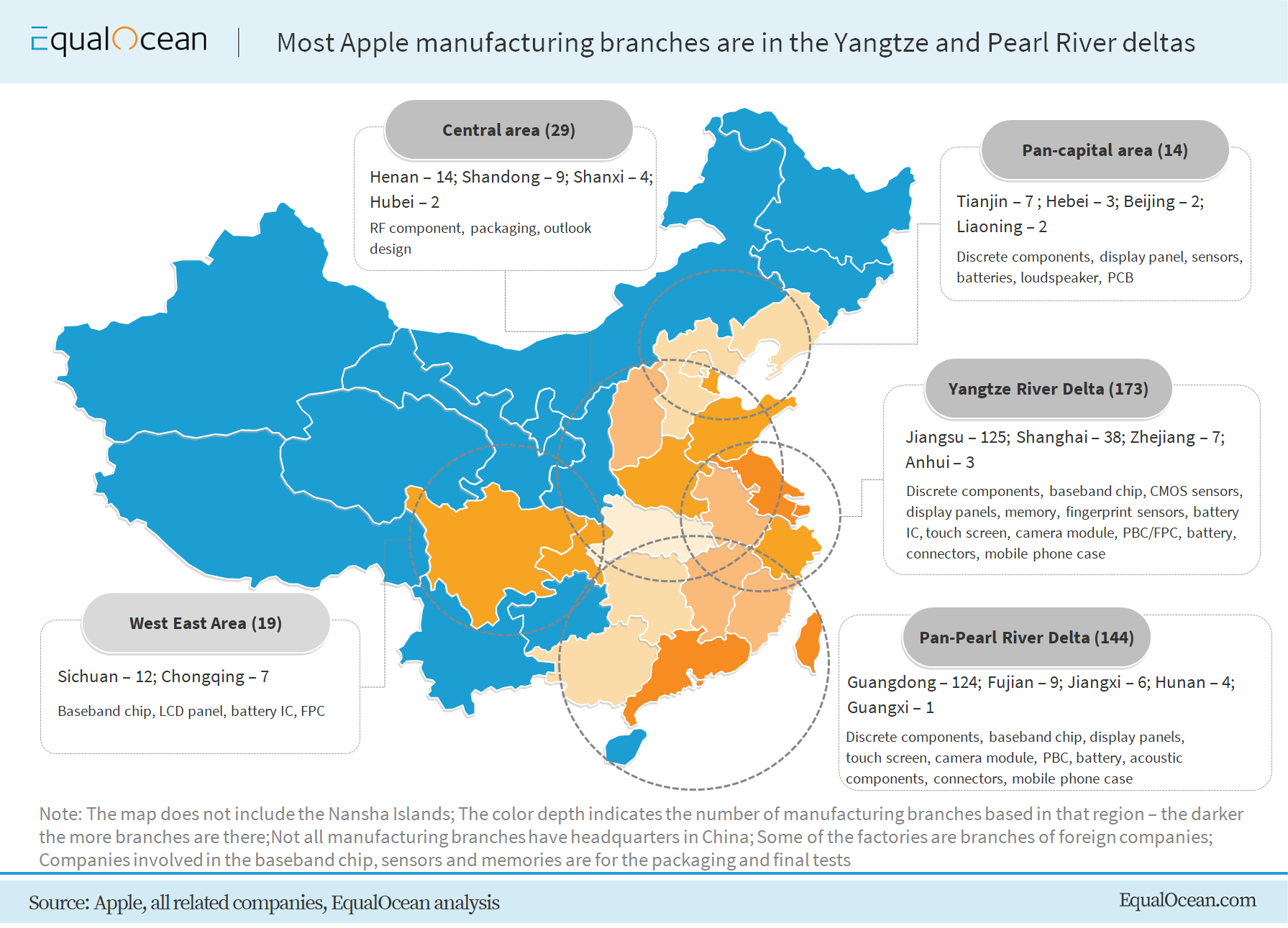 The map above presents the geographic distribution of Apple's manufacturing branches. Among China's 34 provincial-level administrative regions, 19 are involved with the US company's supply chain. Though many of the factories are the suppliers of suppliers along the complex value chain, and are of comparably high fungibility, Apple's business performance or policies that would affect the bilateral transactions and the economies of these regions are still highly correlated.

The 380 branches that participate along the supply chain are concentrated in the Yangtze River Delta and Pearl River Delta, which account for 46% and 38% of the total number in China, respectively.

The Yangtze River Delta area, as the country's most important economic region, which contributed around 20% to China's total GDP in 2019, is deeply drenched in the US firm's supply chain as well. With 173 related branches rooted, the region is not only distinguished in quantity, but also in technology advancements as most of the Apple-related products there are technology-intensive. The major categories are display panels, semiconductor components, final assembly and other components related to antenna and acoustic modules.

The second most involved region is the Pan-Pearl River Delta, with 144 Apple supplier branches. In this region, Guangdong province contributed the most, as Guangdong and Shenzhen have been engaged with the technology industry since 1978, the period of Economic reform, and have nurtured considerable technology giants such as Huawei, ZTE (00763:HK), Tencent (00700:HK), the BBK group and countless promising startups. As a causal trait, Guangdong harbors the most comprehensive electronic industry chain.

Apple's supporters in the PPRD area lie in a similar range of panels and screens, with the Yangtze River Delta, but with fewer assembly lines while more low-valued electronic and non-electronic components.

The central region that comprises Shandong, Shanxi and Henan, is comparatively more labor-intensive as Shandong and Henan are the second and third populated provinces in China. Businesses along the Apple supply chain are mainly related to Foxconn's (2354:TW) final assembly lines and Goertek's (002241:SH) audio components.

Investors' confidence is high in Apple suppliers in China

The chart below presents the financial and stock performances of 11 Chinese public companies that are in Apple's value chain, which are mostly classified in the electronic equipment manufacturing industry. For the most recent year, from August 2019 to 2020, the selected companies achieved an average price rise of 112%.

As the US 'tech war' against China rages on, the Chinese government has pushed favorable policies, injecting capital into upstream firms in the technology industry. Consequently, there has been a great deal of hype around technology-related stocks since the beginning of 2020.

Though the overall market caps of Chinese public firms are on the rise, companies that are in Apple's value chain delivered particularly eye-catching results. Led by Lens Technology's (300433:SZ) 266% rise in price per share (without changes in outstanding shares), the average percentage change of Apple supplier stocks reached 112%, which is 32% higher than the industry average. 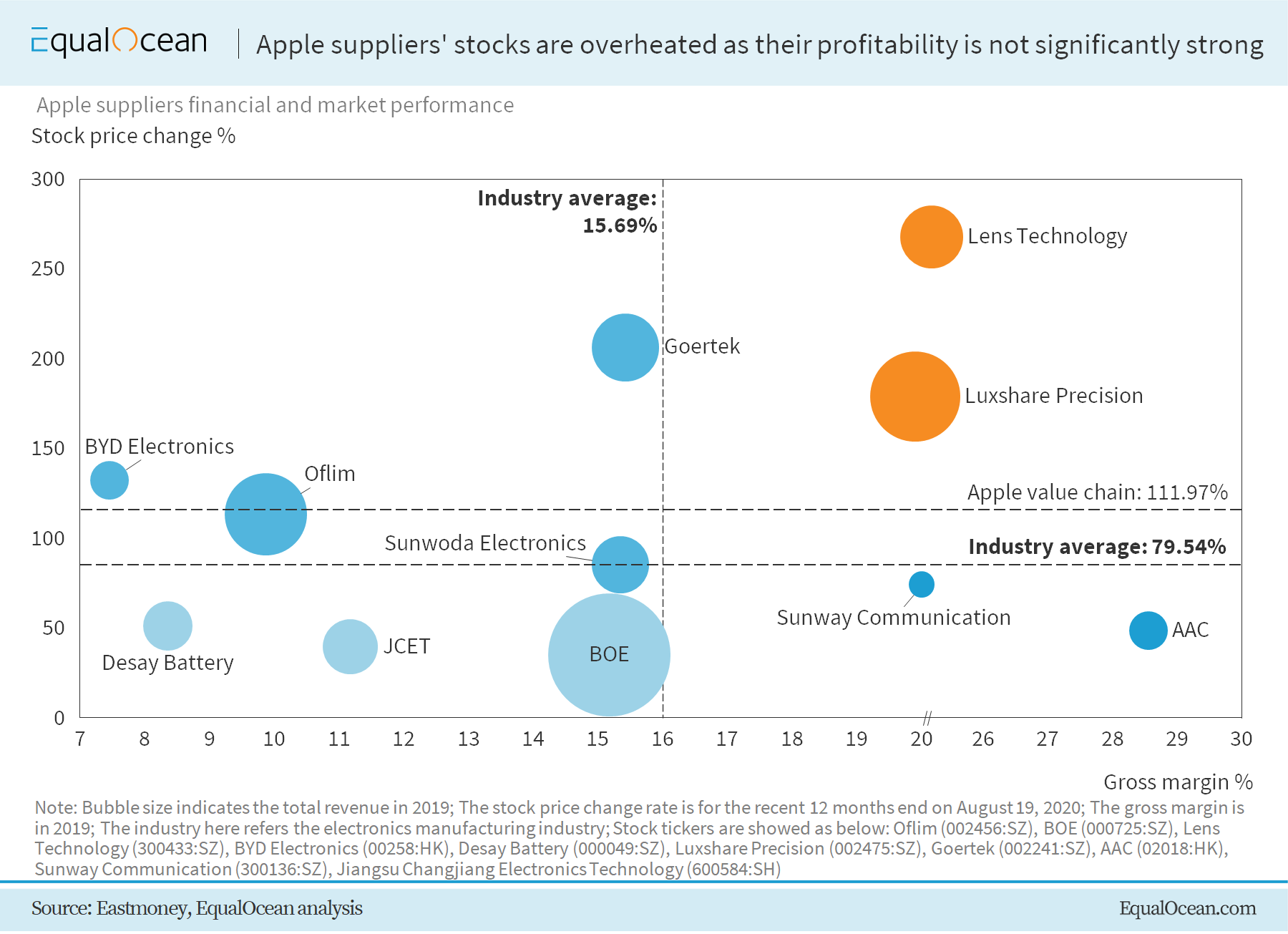 The prior reason for the outstanding performance may not be directly related to Apple, as most of the companies listed above also provide components for other consumer electronics vendors such as Huawei and Xiaomi (01810:HK). The investor confidence for the overall electronics market driven by the 5G commercialization is the context. However, Apple, as the highest valued tech firm around the world to some extent endorsed the capacity of its suppliers and empowered them by the considerable volume of orders.

Though the market is giving  positive feedback, the profitability of those suppliers is hardly above the average. Over 60% of the suppliers presented gross margin lower than the industry average level at 15.69%, indicating a relatively plain bargaining power.

Luxshare (002475:SZ) has been closely working with Apple’s supply chain, providing precision components for Apple's consumer products. In 2019, the company became the biggest manufacturer of Apple’s Airpods. The cooperation with Apple has brought Luxshare a rich margin at 20% and a soaring stock price with a 179% rise. By acquiring 100% equity of the Taiwan-based iPhone manufacturer Wistron Corporation’s (3231:TW) assembly businesses Wistron (Jiangsu) Co., Ltd and Wistron (Kunshan) Co., Ltd, the company becomes mainland's first iPhone assembler. As the conflict between the Eastern and Western intensified, Luxshare is in high possibility to shoulder more of Apple's supply in Asia.

As the company with the highest stock price rise at 268%, Lens Technology (300433:SH) is the provider of cover glass for Apple's iPad, iWatch and possibly the iPhone. With the impact of the pandemic, the rocketing sales of PC and tablets with 26% year-on-year growth in the second quarter of 2020 drove the company's revenue from large-sized glass up by 40%. As the research institution Canalys forecasts, the demand for PC and tablets will increase for the following quarters. The favorable situation is similar for smartphones and smart wearables due to the economic rebound and the 5G rollout, which will simultaneously drive Lens Technology's revenue.

AAC Technologies (02018:HK) has long been cooperating with top vendors like Samsung (005930:KR), Apple, Huawei and Xiaomi within its acoustic components business. Known for its MEMS microphones and speakers, the company has clouted both domestically and overseas as one of the top three companies in the global acoustic component market. In the first quarter of 2020, its revenue shrank by 5.1% year-on-year, affected by the oversaturated smartphone market and the COVID-19 outbreak in China. Nonetheless, its deep roots in China make the firm be greatly supported locally: for one, Xiaomi and OPPO invested in AAC’s optics arm in July 2020, joining the list of its ‘industrial’ backers.