The success of Xpeng's IPO might see pressure in the future. 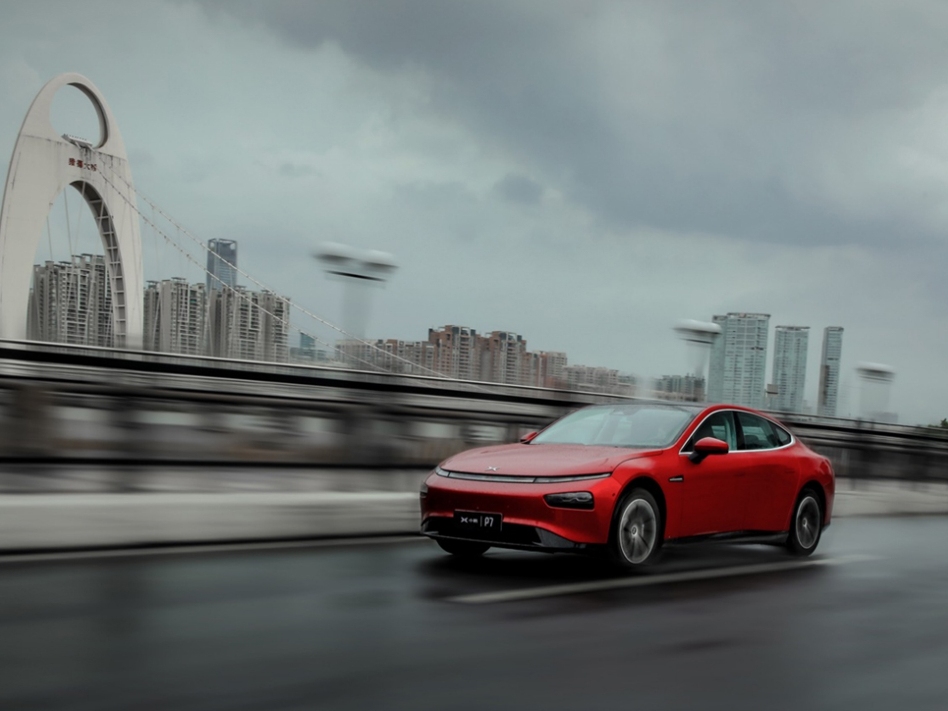 EO Auto is watching all shifts and changes in the EV industry. We have  been analyzing Xpeng’s upcoming IPO in the US, with reference to our analysis on other EV producers such as NIO, Li Auto and Tesla. Based on Xpeng’s narrative and performance in recent years, we have decided to initiate Xpeng coverage with a neutral rating.

Future P7 Sales Can be Crucial

Xpeng’s first model – the G3 – has undergone a rollercoaster in its sales record. The peaks and troughs in G3’s sales numbers indicate that its sales are highly dependent on promotions and changes in government subsidies. However, it should also be noted that Xpeng’s G3’s sales have so far underperformed its Chinese counterparts such as BYD, NIO and Li Auto. With over two years in the market and 147 direct and franchised stores spreading across major cities in China, the G3 is still not able to deliver a satisfying sales result.

Following the G3, the P7 is the second model Xpeng released in April 2020. This model was originally designed to compete with Tesla’s Model 3. However, so far, the attention-grabbing sales of P7 still lack visibility as it does not yet have a clear brand positioning. Meanwhile, by taking advantage of price subsidies for EV below CNY 300,000, Tesla’s Model 3 price reduction has attracted skyrocketing sales since lowering its price in May 2020 – the numbers jumped by 200% in May following the announcement. This shocking sales figure is partly driven by Tesla Model 3’s price reduction, but it also shows that the release of P7 has not been able to significantly shift consumers’ EV purchasing decisions. Coming off the underperformance in G3 sales and debut of P7, Xpeng may have a hard time meeting its expected 2Q delivery numbers.

We think the gross margin is an important measure among EV manufacturers. While EV is a burgeoning business with almost guaranteed strong market expansion in the foreseeable future, companies are also burning large piles of cash to design their own EVs while maintaining all the necessary infrastructures – i.e. stores, charging stations – to remain competitive in the business. So, with such a high risk in play, we think sellers that attain positive gross margins have achieved a relatively sustainable profit-making model. On the contrary, a negative gross margin can reflect a lack of economy of scale. 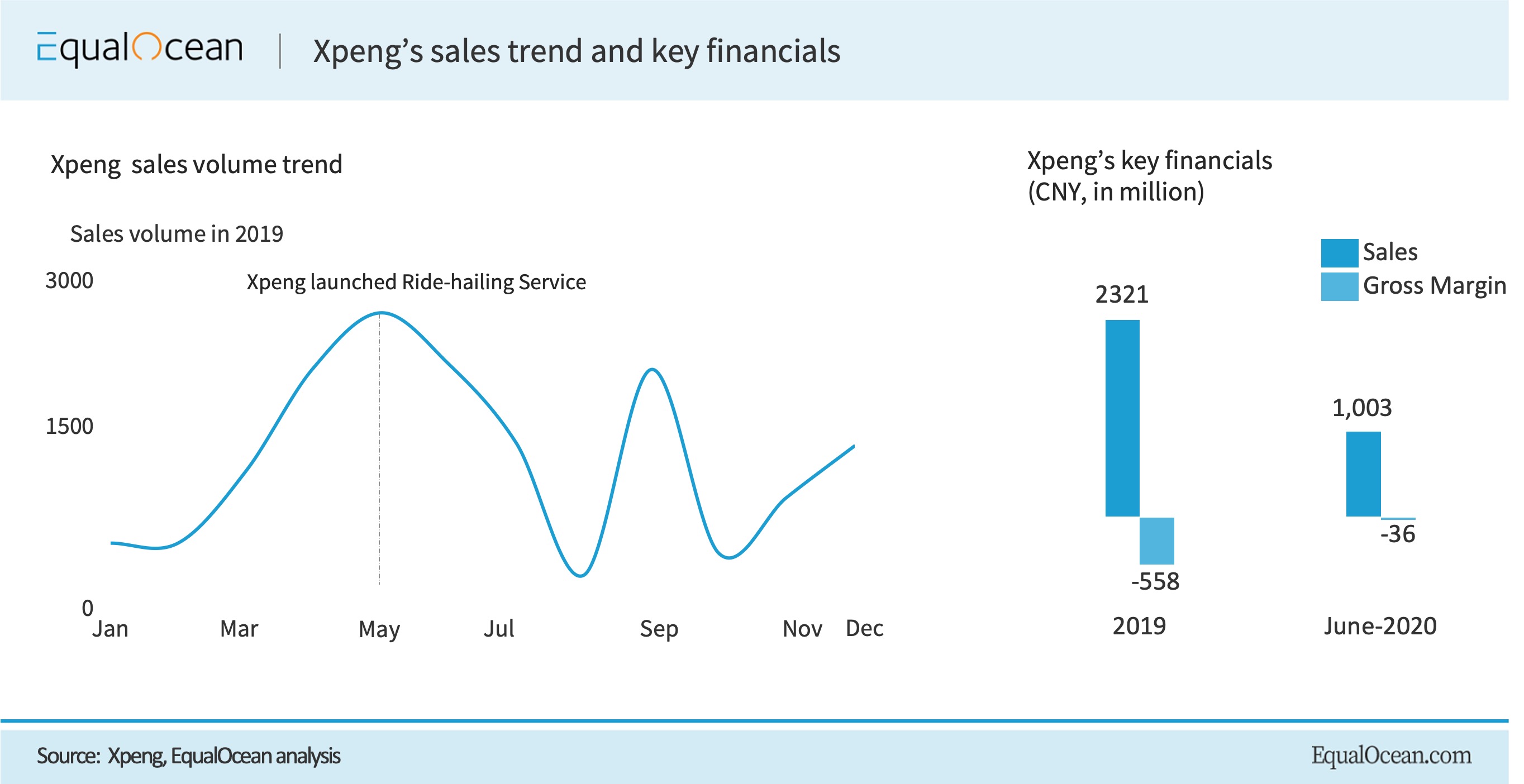 As of now, only Tesla, Li Auto, and BYD have a positive or breakeven gross margin. In the case of Xpeng, its past margins have been – ~24% in FY 2019 – which is still distant from achieving this goal. In this aspect, two EV makers that standout are Tesla and Li Auto. Tesla’s margins have been  16.7%-- this was achieved through its cost optimization in components and localization of manufacturing processes. As for Li Auto, its positive margin from the start is driven by the low cost of producing hybrid EVs.  Compared to these two EV makers, Xpeng’s pure EV standpoint seems to leave the economy of scale and upstream optimization as the option to pursue profitability in gross sales.

For now, barriers for EV makers to convert to positive margins seem to grow higher as well. With a maturing Gigafactory in China, Tesla Model 3, which now starts at CNY 271,550, is achieving ~30% gross profit and has even more room for price reduction going forward. On the other hand, Xpeng’s P7, priced lower than Model 3 (starts at CNY 229,900), is already in negative gross margin territory. With Tesla’s growing capability to further reduce its MSRP, one can only imagine the pressure on Xpeng’s P7.

The idea of building smart EV has been the main narrative around Xpeng, and it is evident that it has incorporated advanced features such as in-car human-computer interaction, high-end chassis modulation to enhance the modern feel of its vehicles. These can be attractive points-- purchasing an EV with high-end and high quality features embedded at CNY 200,000 can seem to be a bargain. However, mixed consumer feedback so far on G3 and P7 suggested some design problems in both models and indicated that Xpeng’s R&D effort might be missing some points. For instance, although the making of P7 from an in-car intelligent system to high-end interior design is superior to that of Tesla Model 3, many car owners still prefer Tesla and purchase it at a premium compared to P7.

Another concern regarding Xpeng’s R&D is its allocation of resources. Although Xpeng’s R&D spending is currently 95% of its total sales compared to Tesla’s 5.5% in FY 2019, it is still behind Tesla in the magnitude of R&D investment (USD 300.94/1343 for Xpeng/Tesla respectively in FY 2019). This can be crucial as the competition is dependent upon the magnitude of the R&D effort. In the past 3 years, Xpeng also devoted its R&D effort in both G3 and P7, two different types of vehicles with drastically different designs. In 2021, Xpeng is expected to release its third smart EV. This rate of new model release implies limited R&D resources given to each model, which we think in turn can lead to more design or quality issues and a lack of competitiveness in the future.

EV adoption is an irreversible trend in China, and the government is pushing for it with favorable policies. According to IHS Markit, the EV market will expand from 0.9 million units in 2019 to 4.2 million units in 2025, representing a 29% CAGR. Nevertheless, it is noticeable that many EV sales are relying on policies-- new rounds of government subsidies are often the sole driver for spurs in buying activities. 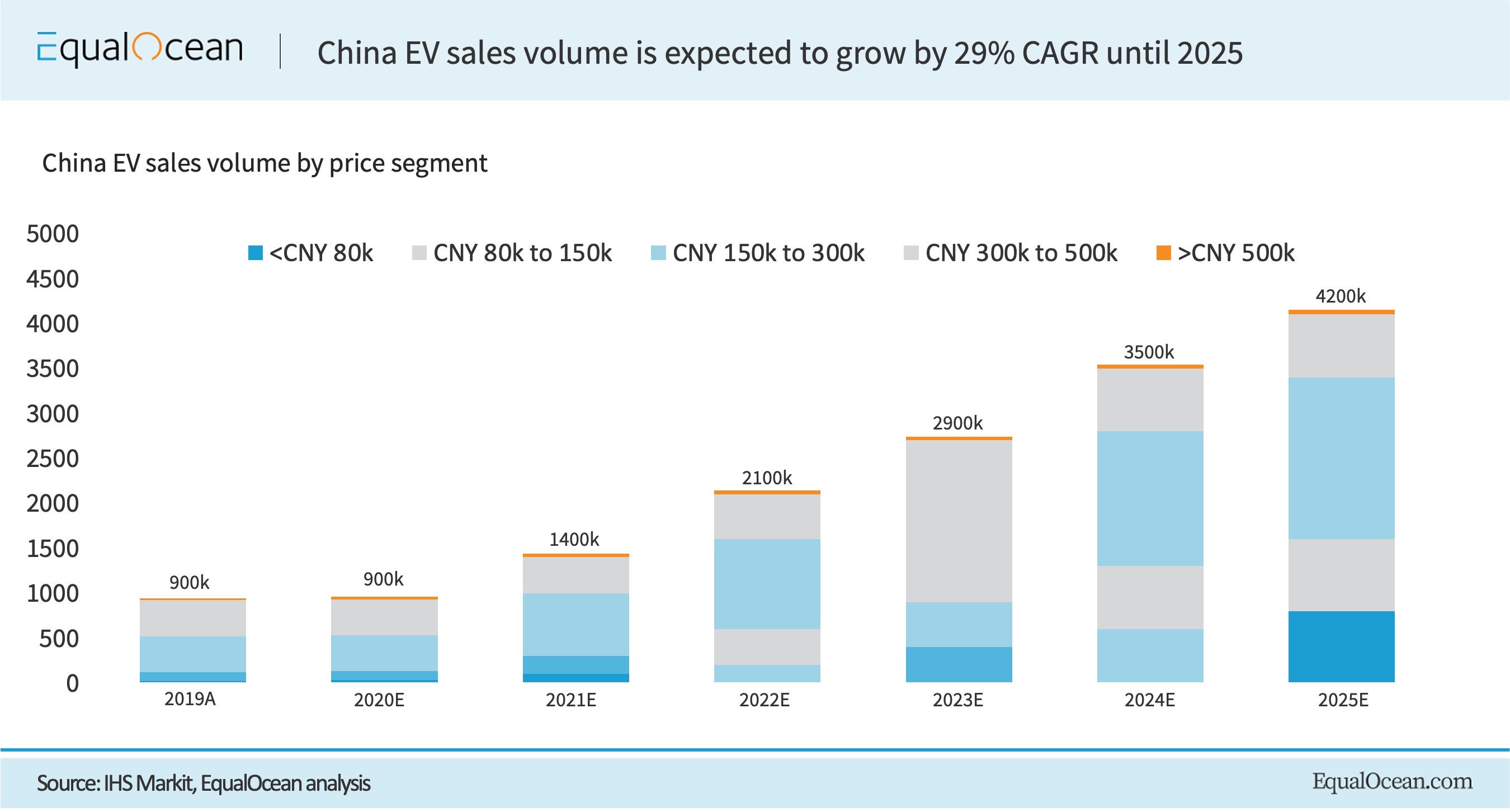 So, in the long term, establishing brand recognition is crucial for competition with government support fading away and real demand kicking in. Currently, Tesla is still the most mature and dominant player in the EV space, and we see that NIO has been successfully attacking the high-end EV market in China. In addition, traditional car manufacturers are also leveraging their brand names to gain access to the EV market, which can intensify the competition in the foreseeable future. At this point, we see that Xpeng is still lacking brand recognition among buyers. Without an inherent customer base as traditional car sellers, the challenge for Xpeng to stay in the game can be enormous.

Considering the discussion above, we initiate coverage on Xpeng with a neutral recommendation and December 2020 Price Target of USD 18.7 per share. 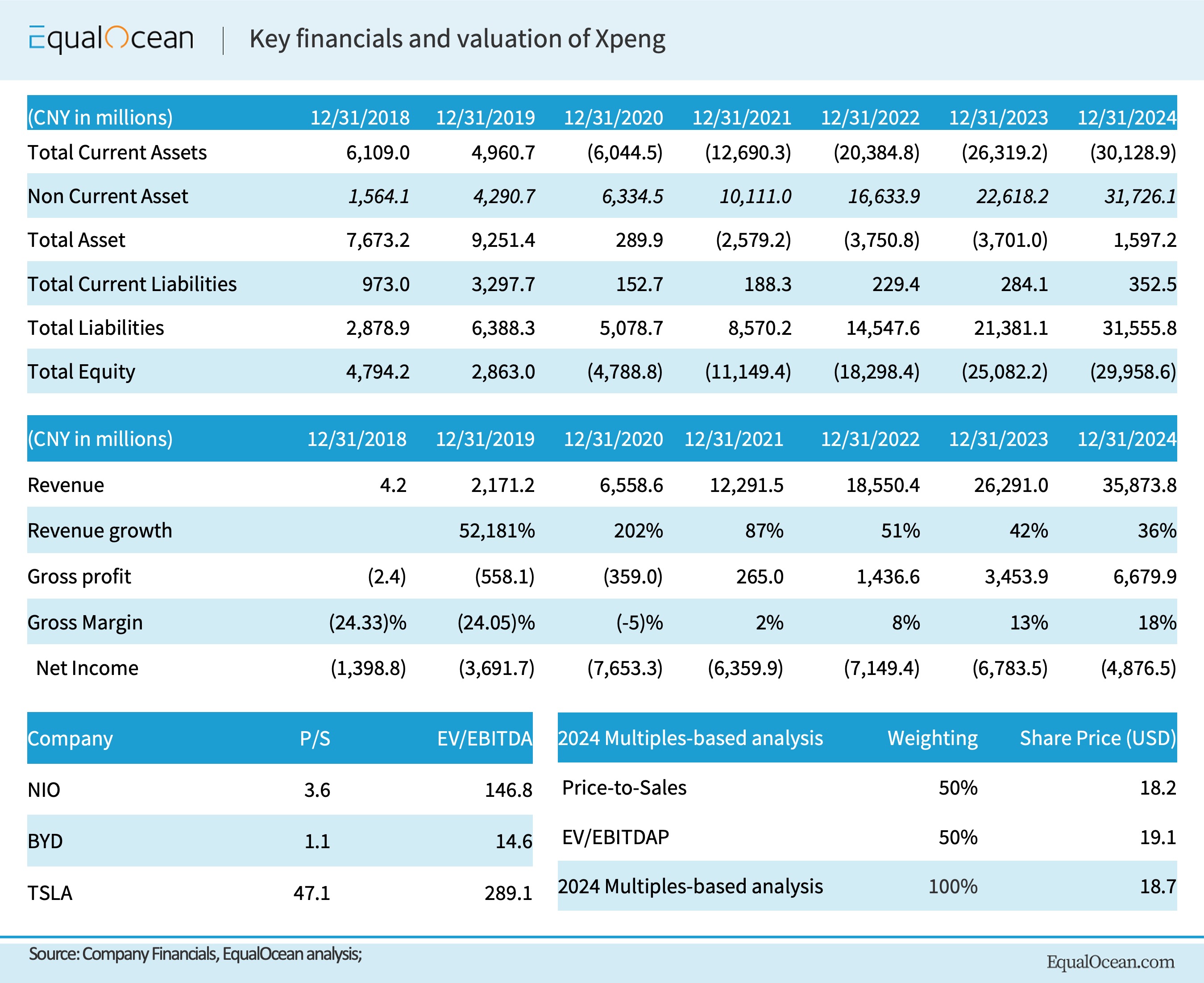 We note the key downside risks to our valuation include: 1) sooner-than-expected tipping point of battery tech which gives BEV makers a strong price advantage; 2) lower-than-expected new car model roll-out which dragging top-line; 3) continuation of underperformance in sales due to price reduction of other brands, such as Tesla. Upside risks include 1) better-than-expected delivery of P7 and the upcoming new model in 2021.