China, with a population of 1.4 billion, has one of the largest gene pools in the world. How does its DNA tech-based cancer detection industry look? Listed on Nasdaq in 2020, Genetron Holdings Limited (Genetron Health) is taking a leading role. 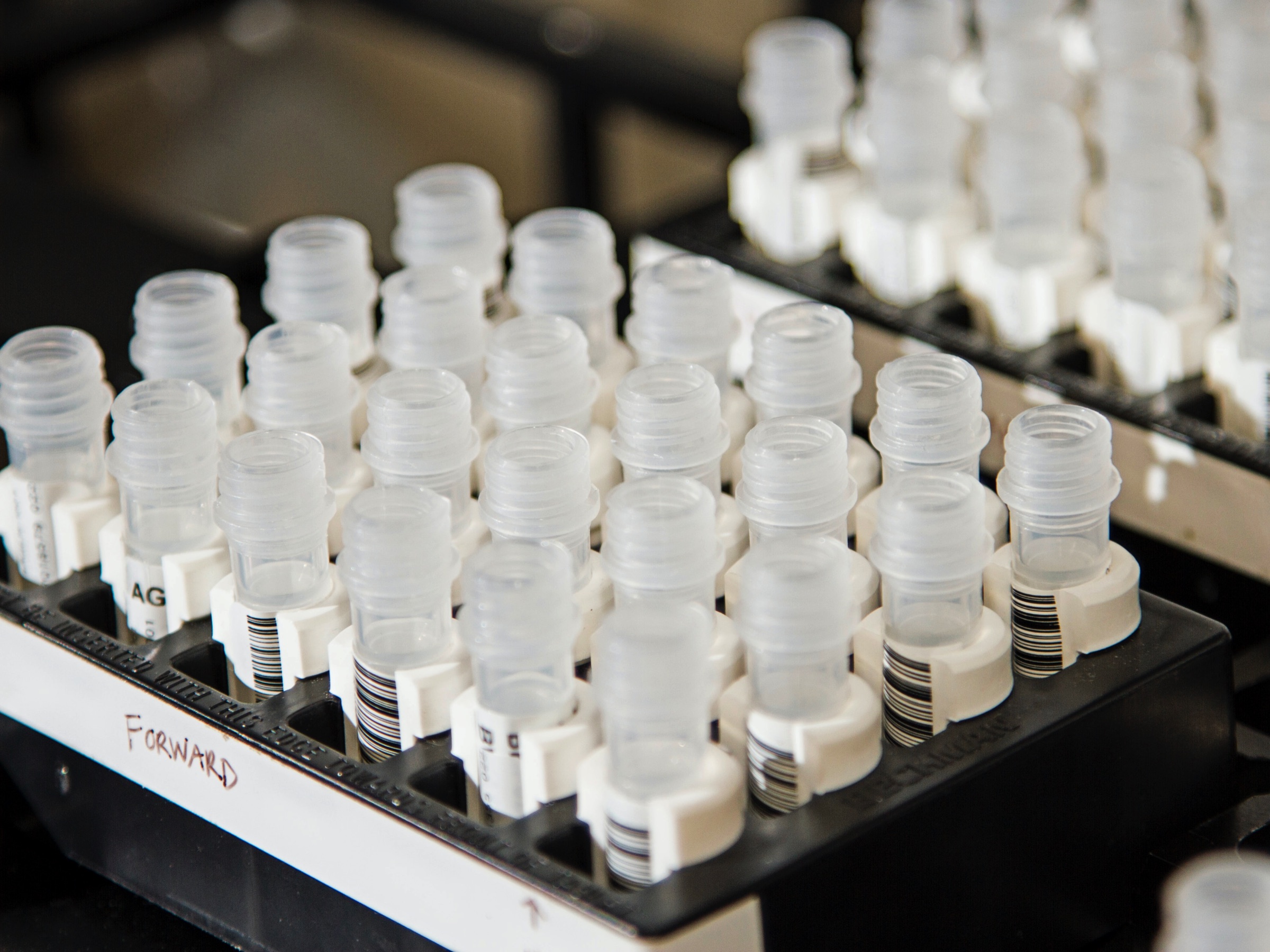 ► The combination of early-stage cancer detection and precision medicine is an effective cancer treatment. The molecular technology for the application in the cancer detection indicates the future of human health.

► US players focus on early-detection for colorectal and pan cancers while Chinese players on lung and digestive system cancers. Besides, research methodology and cohort study size are two key indicators.

► As the early cancer-screening technology matures, the commercial strategy at the current stage is a critical success factor for business expansion. In China’s blue-ocean market, Genetron Health has the first-mover strategy in market deployment.

As commonly agreed, cancer is best dealt with when doctors can detect it early and then apply a targeted treatment. This has driven life science companies to create many innovative solutions for spotting and categorizing the deadly illness as it emerges.

A Chinese national-level project for early screening for lung and digestive cancers was launched on August 29. Led by China's Ministry of Science and Technology (MOST), the project will include a multi-center and prospective cohort study in lung cancer for 120 thousand individuals, as well as over 10 thousand patients for the digestive system cancer study. Besides government support, Genetron Health (GTH:Nasdaq), in collaboration with the National Cancer Center and the Cancer Hospital (at the Chinese Academy of Medical Sciences, CAMS), will provide key technologies of liquid biopsy diagnosis for early-stage cancer.

"We are delighted that we are able to apply this technology beyond liver cancer and now into the lung and digestive cancers," said Sizhen Wang. Genetron Health's co-founder and CEO. "We will continue to expand our early screening research into more types of cancer and to accelerate the clinical development and commercialization effort."

Even though the cancer early diagnosis industry is still in the infancy stage, the market potential has raised high expectations. From a global perspective, the market size is expected to reach USD 170 billion in 2023, according to Global Market Insights. Most likely, the China market will be one of the first few post-pandemic reviving economies to benefit from the healthcare craze. Taking that into consideration, EqualOcean believes China's early-detection market for all cancer types will reach at least USD 58 billion in 2023, close to 34.1% of the global potential. 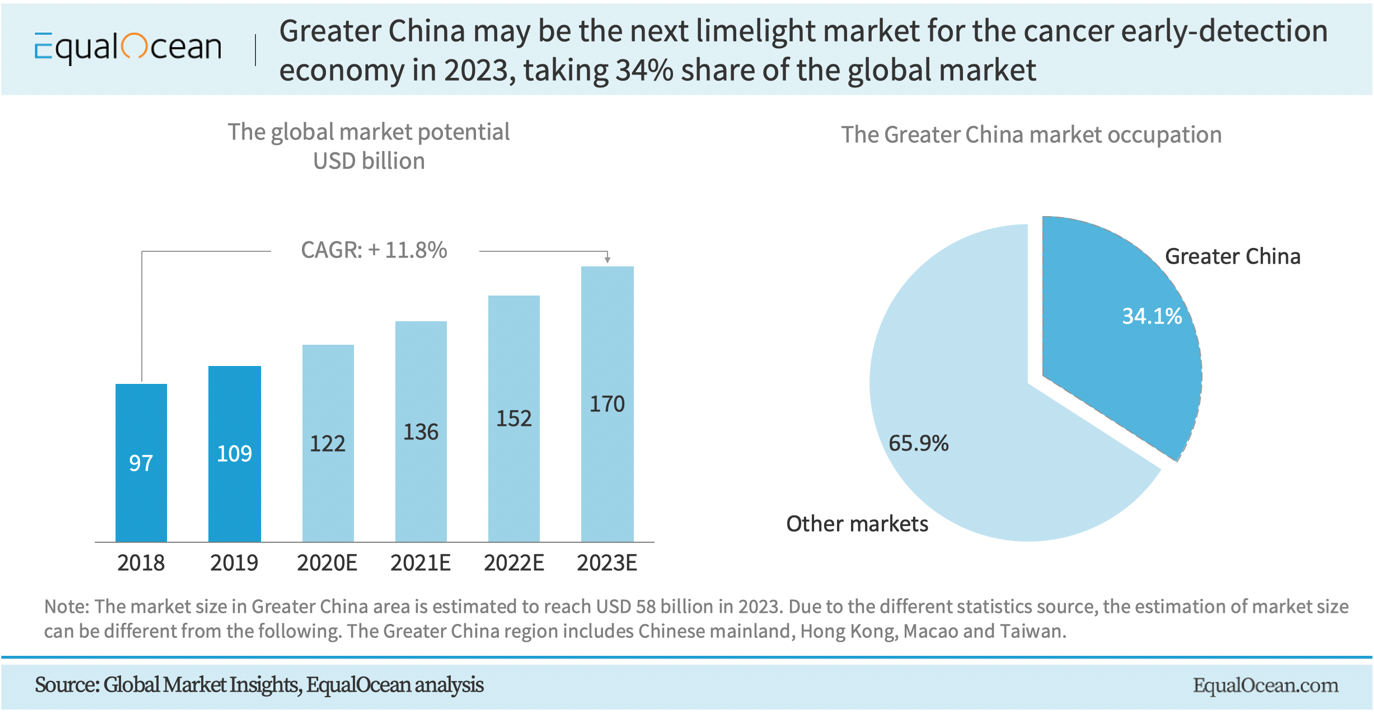 However, for now, the industry landscape has not matured. The extremely high technology threshold hinders many potential companies from entering. It requires in-the-market companies not only to develop reliable and precision medicine technologies but also to scale up in a cost-effective way to benefit the public. 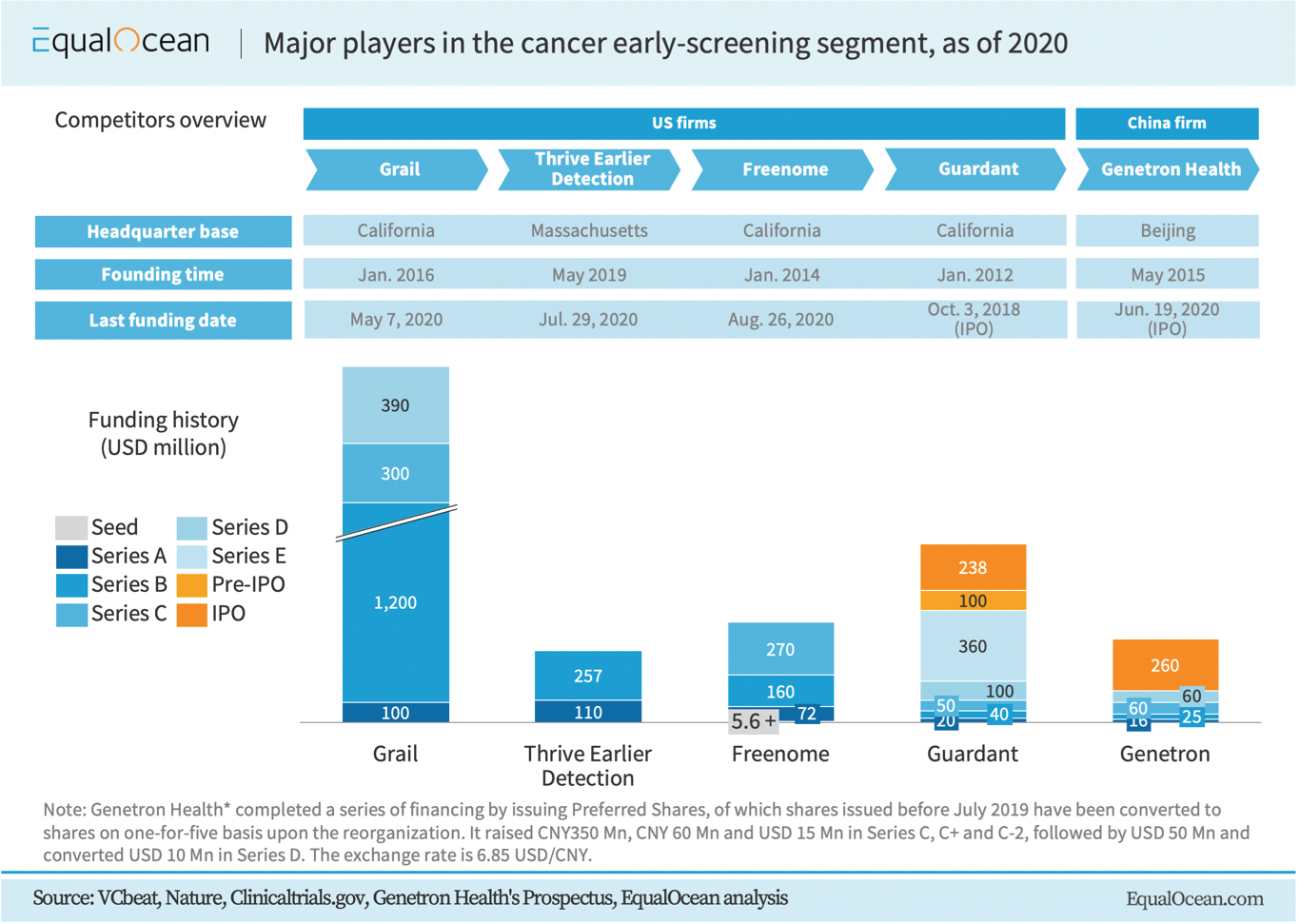 Grail is a subsidiary company of Illumina (ILMN:Nasdaq), a tier-one player in the DNA sequencing industry. It develops a cancer-detection product which can test DNA fragments falling from a tumor in a little blood sample. It has raised over USD 2 billion in four rounds before 2016 and later merged with Cirina, a Hong Kong-based cancer-diagnosis startup.

Freenome features a cross-discipline technology integrating computing biology and machine learning to diagnose illness patterns from multiple billions of biomarkers. It aims to develop a blood test-based technique and embed it into the medical system to obtain healthcare feedback in a computer-science methodology.

Guardant Health initiated the ECLIPSE trial to evaluate the performance of its LUNAR-2 assay to detect early-stage colorectal cancer in a screen-relevant average risk population from a simple blood draw. The study is expected to enroll approximately 10,000 individuals and, if successful, support a premarket approval submission to the FDA.

Genetron Health is the first company to publish early-stage liver cancer screening results in an academic journal, i.e. the Proceedings of the National Academy of Science of the USA. It is the only company in China participating in national key research and development projects organized by the Ministry of Science and Technology for liver, lung and digestive cancer early screening. The company also has collaborated with one of the leading medical examination centers, iKang, to promote its cancer screening services.

Taking in a zoom-in look in China, the industry is still at the nascent stage. However, the demand, or potential consumers, has exploded and is being further stimulated by the continuous health awareness rising. The considerable unmet needs make this emerging market very fascinating for investors. Some local companies, such as Genetron Health, already stepped into this pool years ago to catch the opportunity as it emerged.

In the early-detection industry, many players have been conducting research over the years. Taking a global view, some US players focus on the research in colorectal cancer and pan-cancer and Chinese companies focus on digestive system cancer and lung cancer.

The choice of cancer type depends largely on market demand. Most US players conduct research in the early detection of colorectal cancer, as this deadly illness is the second most lethal cancer in the US. In China, the top three cancer types with the highest occurrence rate are liver cancer, lung cancer and digestive tract cancer – which are also considered the three most promising early-detection market segments that investors and companies have eyes on.

According to Frost&Sullivan, in China, the early screening market size in 2023 is estimated to reach USD 9.6 billion for colorectal cancer, 7.2 billion for liver cancer and USD 5.8 billion for lung cancer. Besides these three cancer types, there is a boundless market potential for other cancer types, including some of the most critical and popular kinds, such as gastric cancer and breast cancer. The total market potential in China is expected to reach USD 75.3 billion in 2023. 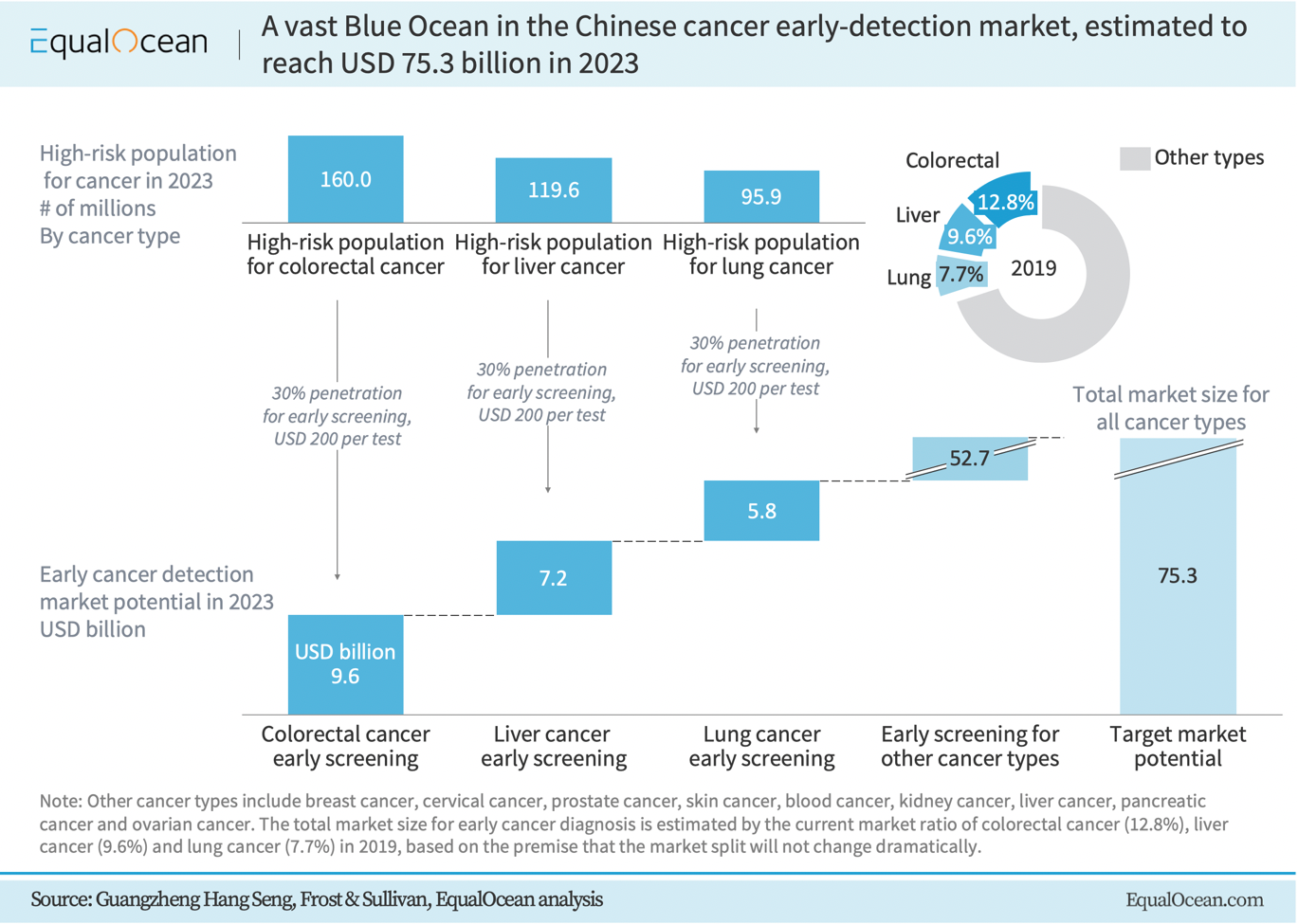 Besides, the sample population and diversity can also play a critical role in a promising early-detection study – generally, the bigger the sample pool and more diversity, the higher-quality test results, leading to an advantage in prospective studies. 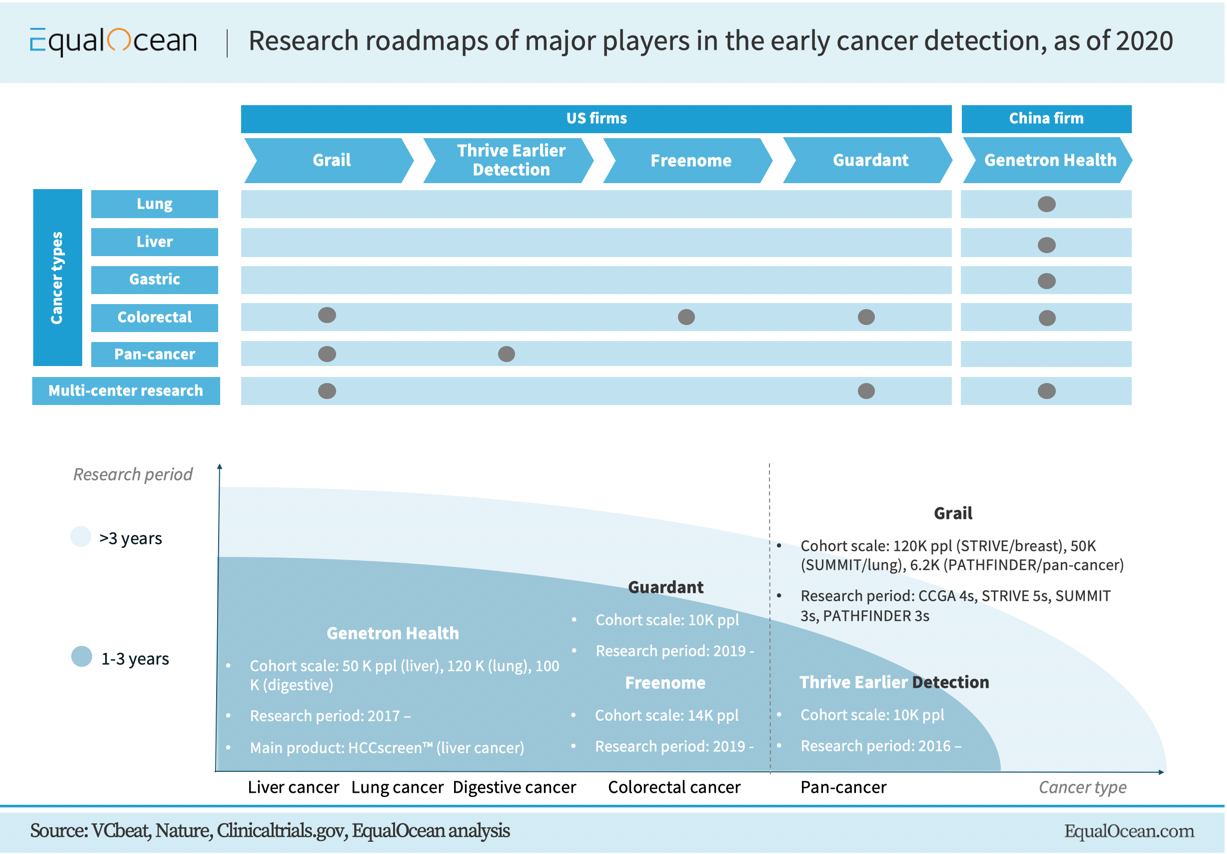 From the graph, Guardant, Freenome and Thrive Earlier Detection all organize research on cohort studies on a scale of 10k – 14k. Genetron Health and Grail have already expanded the study scale to over 100k. Now, the Chinese player who targets locally popular cancer types is planning to increase the cohort study to 200k in the coming joint clinical government-led research project.

Developing unprecedented technologies burns money, but the efforts can always be well perceived by the market watchers. Even though the early-screening for cancer is a money-consuming industry, there is a tremendous market awaiting ahead for the players.

Commercialization has always been a tricky part for these cutting-edge technology innovators, especially at the infancy stage, without material products ready for the market. From this perspective, the payment solution, or reimbursement, can be the biggest hurdle to reach business success.

After the challenge of developing top-notch technologies, providing an affordable and convenient early-screening solution is the next-level threshold for these companies. By far, more US forerunners in the cancer early-detection field have made the necessary steps towards promoting market commercialization.

Exact Science already got its FDA approval for Cologuard. Similar to Epigenomics, their Epi ProColon has been approved. Freenome submitted an application in 2019 for its colorectal cancer screening test to the US Food and Drug Administration (FDA) and Centers for Medicare & Medicaid Services (CMS). Another US company, Grail, the startup backed by the DNA-sequencing giant Illumina (ILMN:Nasdaq), also attempted to launch its multi-cancer test to the market as early as in May 2019.

Indeed, to realize the market potential, it is never too early to take action for pre-marketing deployment, especially in the blue ocean market such as the Chinese market. There, the medical care system can be a critical success factor.

As the Healthy China 2025 Initiative promotes better healthcare across the land, the reimbursement solution is one key area that may determine if large-scale consumer sets have access to high-end medical resources. Apparently, collaboration with public hospitals or working with third-party business insurance are two optimal strategies.

Among many Chinese players, Genetron Health is one pioneer that has been sprinting on the commercial path. More than working with national research institutes for a technological breakthrough, it also works with the examination center iKang Health (KANG:Nasdaq) and co-develops insurance products with third-party insurance companies.

Early diagnosis is one key for solving the lethal problem of cancer. China has been incubating an incredibly vast market as the payment solution matures. Currently, the high-risk population in China for liver cancer amounts to around 100 million. If the cancer early-detection product is reimbursed by medical care with a 10% penetration rate, the market size for liver cancer alone can reach over CNY 10 billion, assuming an examination fee of below CNY 1000.

In this high-threshold industry, the core competency not only comes from the technology but also from the diversity of the cohort study and perhaps research methodology. In this sense, those government-led or multi-center projects tend to be higher-quality.

As many players realized technological breakthroughs, those who have made the early layout in business have a bigger winning chance. Especially in the Chinese blue ocean market, it is particularly urgent and the right timing is needed to accelerate commercialization. Genetron Health, undoubtedly, has already gone very far down the path of business expansion.