The hundreds of billions-level market potential of the Chinese medical cosmetology economy has attracted Meituan Dianping, Ali Health and JD Health to take a share. SoYoung, a beauty tips provider, is facing a more challenging situation than mere slumped business amid the COVID-19 quarantine. 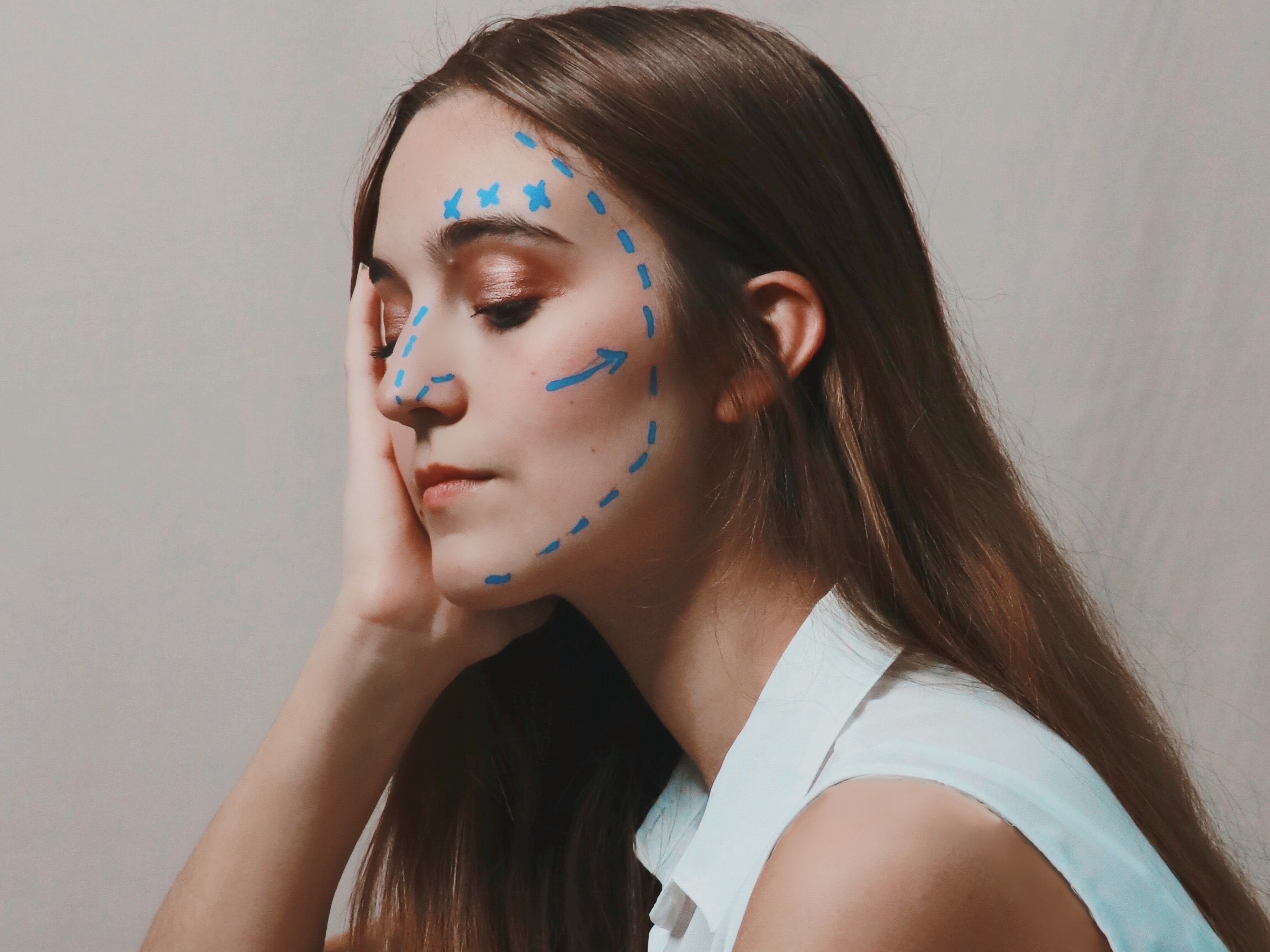 ► China's medical aesthetics industry is entering into a booming era, with consumer penetration tripled from 2015 to 2018.
► Internet-based O2O platform SoYoung provides an easier path to beauty solutions and runs a unique business model.
► As the competition escalates, SoYoung has to face the disadvantage of a historically-damaged reputation and the homogenization risk.
► Building up the reputation by favoring consumers with qualified services and transparent prices is the only way out.

As the first Internet-based medical cosmetology stock listed on Nasdaq, SoYoung (SY:Nasdaq) has laid the path for other platforms. More importantly, it aggregates a lot of medical cosmetology institutions of various scales, from civic-dominant private plastic surgery hospitals to small street clinics. In other words, it helps consumers take control by providing more information, especially competitive products and user experience.

The so-called 'Internet medical cosmetology' has been doing to simplify and shorten the value chain in the traditional offline medical cosmetology. These medical cosmetology stores are expensive, membership-based and not transparent. Consumers rely more on friends' recommendations or referrals because they may waste money on unnecessary services or products. This is precisely the niche angle that these Internet platforms have started to penetrate, aiming to resolve the information asymmetry – which is undoubtedly the first block that hinders the consumption drive.

SoYoung, along with other cosmetology-focused companies such as Gengmei and Yuemei, started in the early 2010s. Not the first runner, SoYoung has developed very fast. In 2014, it anchored on online social community buildup, e-commerce and content-oriented marketing different from others' community-based online-to-offline modes. This strategy has been proven successful by the recent livestreaming craze. It took around six years for the company to go public at an IPO amount of USD 180 million in May 2019. 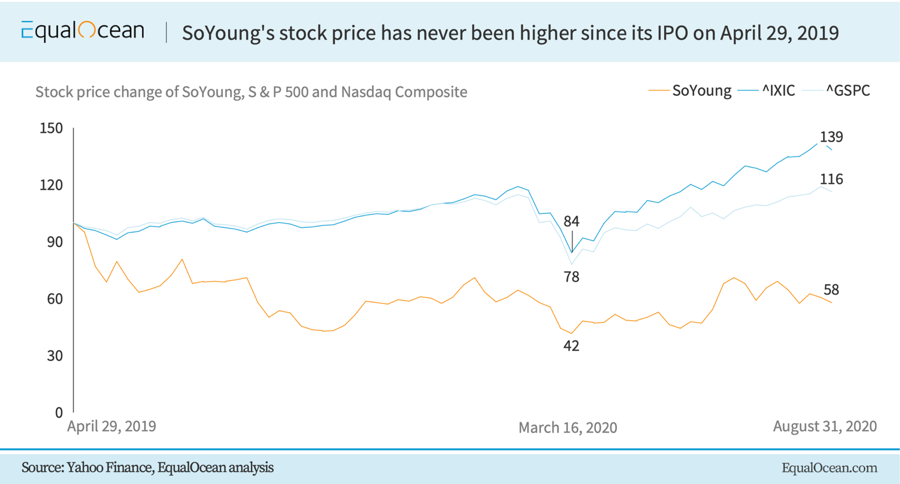 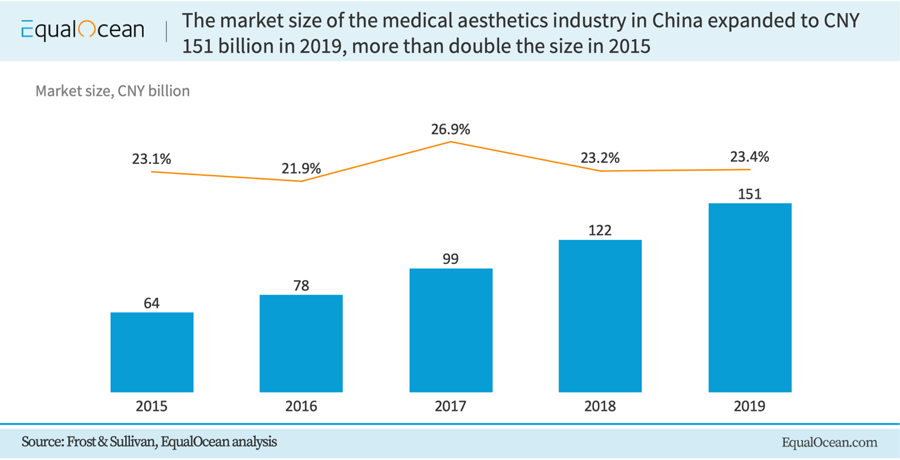 The fast growth has indicated the bi-directional network effect, connecting the products and services suppliers, the other end connecting customers. The penetration rate, calculated on a national population base, increased from 0.47% in 2015 to 1.39% in 2018, showing a wider influence and market confidence from consumers.

Particularly, the penetration rate among the target group, who are females aged between 18 and 40, increased from 2.3% in 2015 to 7.4% in 2018. The tremendous progress states that medical cosmetology has become more accessible and acceptable for target consumers as a sustainable business.

A path to beauty

A dynamic online community is the foundational business facility for attracting new users for aesthetic surgeries. From this perspective, the business also has some communications or media characteristics, which pivots propaganda or educating consumers. SoYoung primarily leverages the WeChat platform to attract new users and keep them active by publishing entertainment-related content. Gengmei, SoYoung's primary competitor, puts more resources into TV shows and advertisements. Even though these two aim at similar consumer groups, the traffic operation performs differently with original content and user experience on SoYoung creates more monthly active users (MAU) and new installation records. 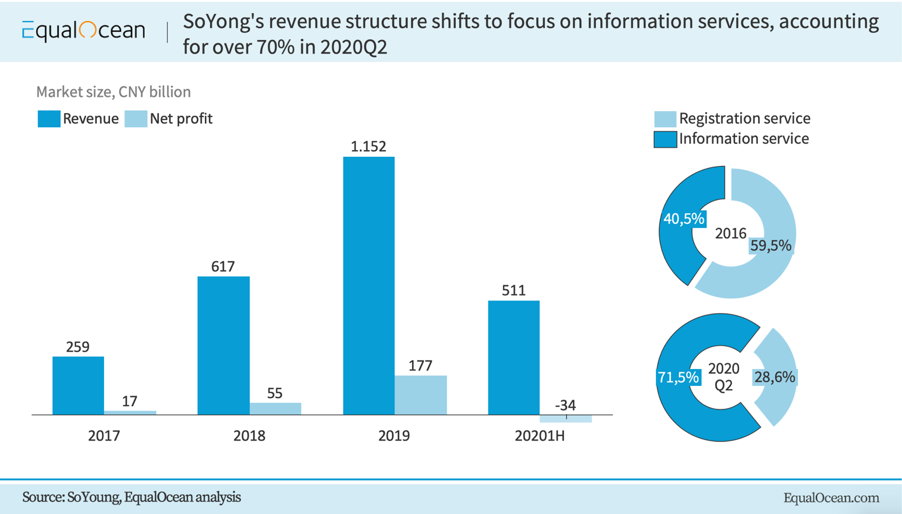 Compared to Gengmei, SoYoung has more exclusive promotional cooperation with many medical cosmetology clinics and institutions. In this way, SoYoung can aim a higher average revenue per user (ARPU) than its competitor Gengmei because exclusive services are worth a higher market price. Indeed, the company invested a lot in marketing and promotions, which has proved to be an effective strategy. From 2017 to 2018, SoYoung's marketing and promotion expenses increased 144.7% to CNY 230 million and increased information services up 189.1% to CNY 415 million.

After SoYoung went public, it raised the attention of many investors, but not enough to be the 'apple of [anyone’s] eye.' According to Insider Monkey, SoYoung was held by six hedge funds as of Q1 2020, but this was not even close to the average level for similarly valued Nasdaq-listed comparable entities– 17 hedge funds.

What now confronts SoYoung is the dilemma between doing the right thing or doing a good thing. Sometimes, the two objectives cannot harmonize when a company is faced with only limited resources, money and time.

One damaging phenomenon is deception and fraud. It is not uncommon that disqualified products, unprofessional therapists and unlicensed clinics lie to consumers in medical cosmetology. According to the Chinese Association of Plastics and Aesthetics, there were around 17,000 licensed professionals in 2018, but the illegal therapists exceeded 150,000.

The qualification issue is one of the greatest challenges in the plastics and aesthetics and it is worthwhile to invest to make the situation better. SoYoung recently launched a project, calling an initiative to purify the industry from licensed therapists and professionals. Indeed, by doing so, SoYoung established a socially positive profile and showed determination to provide more qualified services.

Meanwhile, more players have come in. Ali Health, Ping An Good Doctor, WeDoctor, etc. – they leave out a segment for this business and call it 'consumable healthcare.' These Internet-backed healthcare arms, similar to SoYoung, provide offline medical aesthetics information. As all the players' products and services gradually converge, SoYoung may be faced with a bigger challenge of losing market share – since most players have millions of users and multi-channel access to consumers.

SoYoung sets a very clear goal of serving consumers. What SoYoung wants to achieve is introducing consumers with qualified offline business aesthetics institutions instead of asking consumers directly to order online. Thus a large share of revenue comes from those clinic institutions. So far, the business logic makes sense as the 'information services fees' composition percentage almost hit 75%. The drive behind business suppliers to pay indicates that SoYoung has developed the capabilities to provide target user traffic sustainabily and convert users to consumers stably.

The Internet gives possibilities to every participant in the industry. In the consumer-oriented market, the golden rule is always that 'whoever serves consumers better wins.' The only way is still to provide qualified services and transparent prices and to favor consumers.