Geely is positioned as a leader in China's auto market, with its keen long-term strategy playing out well. 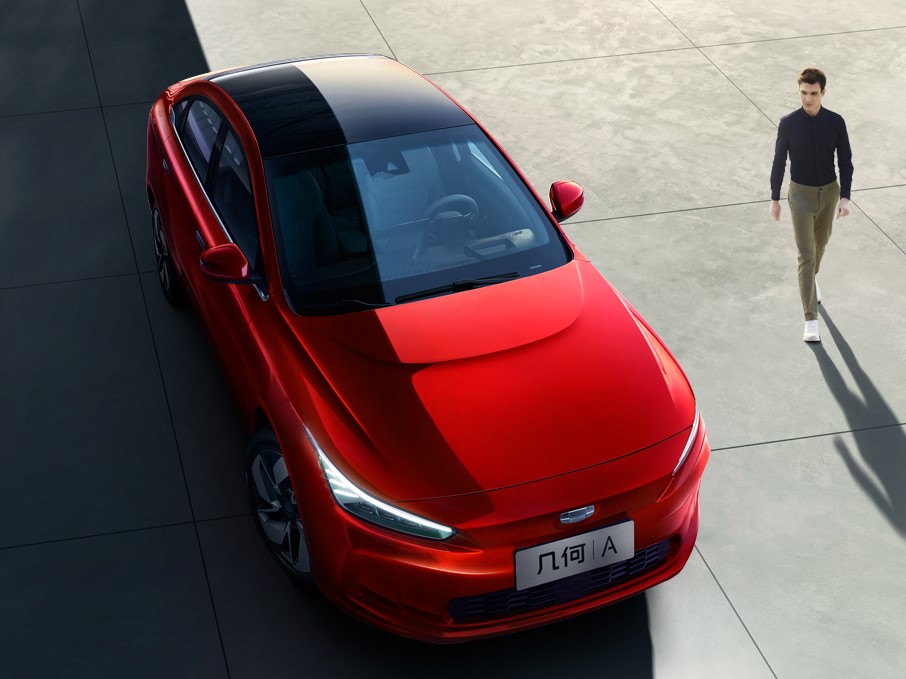 2. Geely is sensitive to market insights and technological upgrading. Its business spans across multiple new tech fields that represent the future of the industry, including ride-hailing (Caocao Mobility), NEV products, batteries and autonomous driving. After acquiring Volvo and establishing joint-venture brand Lynk, Geely successfully entered the mid-end and high-end car market. Geely has made a heavy investment in new energy vehicles and autonomous driving technologies. It also keeps a fast pace of commercialization in related technologies by collaboration with tech leaders like Waymo, Baidu and Alibaba, and industry partners such as CATL.

3. Capital is paving the way for lucrative future – 1. Geely has laid out precautionary plans to secure more cash to prepare for the market slowdown, rising competition in the industry, and macroeconomics uncertainties. It completed an HKD 6.6 million funding through 600 million equity issuances at HKD 10.8-11.2 per share in June. 2. secondary listing on Star market. 3. It had issued a total USD 800 million perpetual bond since the end of 2018.

Recently Geely has been most discussed for its secondary listing plan on the Shanghai Stock Exchange's (SSE) Star Market. If it processes successfully, Geely will become the first vehicle manufacturing company listed on the Star Market.

Before the secondary listing plan news, Geely was famous for its acquisition moves on the international automobile market. Beside of the purchasing Volvo in 2010, Geely now also holds about 10% shares of Daimler, 49.9% of PROTON. 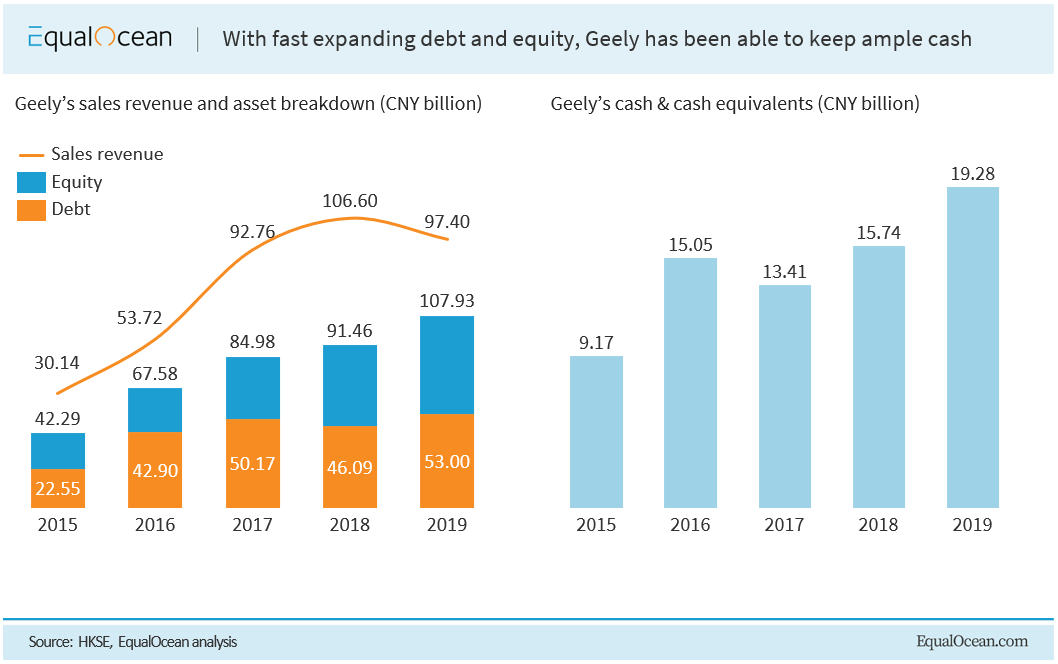 Capital acquisition has brought Geely valuable assets for its expansion and brand upgrading, and also put pressure on its financial status. Geely has made continuous debt and equity financing to keep a healthy financial performance. Geely’s debt raised rapidly from 2015 to 2017. Since 2017, its equity has increased heavily due to the rocketing sales performance and additional shares issuance. So Geely’s debt ratio now is even lower than most of its peers. Based on such moves, Geely has kept a stable and ample cashflow. Geely’s secondary listing plan is viewed as a continuous move to maintain ample funds for its radical operational and capital moves. 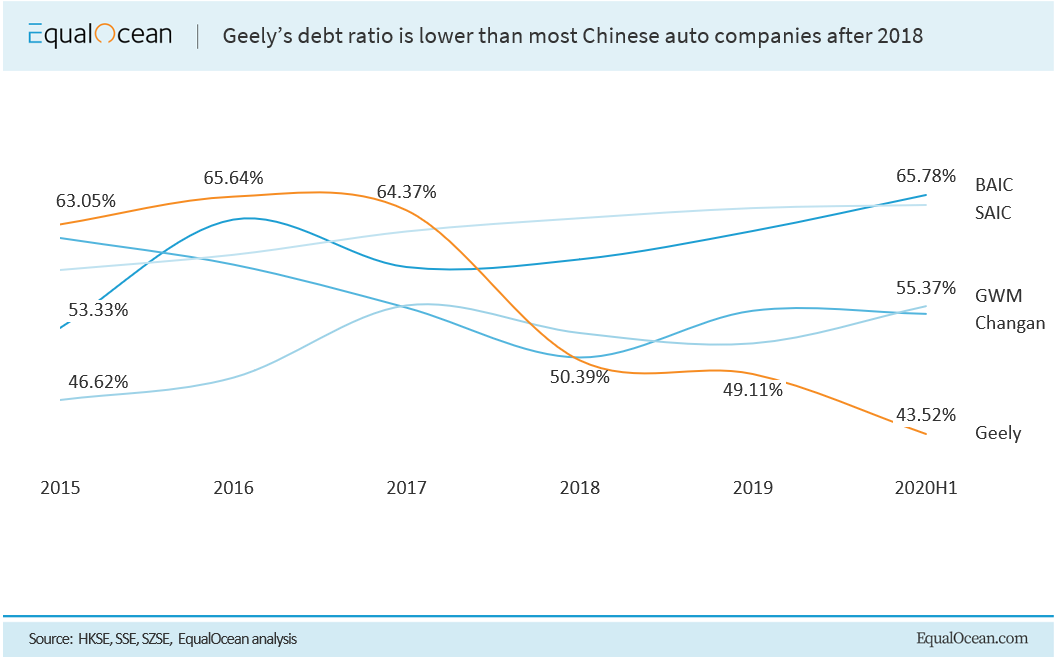 Being listed on the Star Market is limited to companies that are recognized by the China Security Regulatory Commission to have “independent and world-leading technologies, strong innovation, and leading industrial position,” which seems to be not suitable for traditional automobile manufacturers. So Geely’s secondary listing plan can be viewed as a signal of its business model transformation and technological upgrading.

In response to the coming smart vehicle age, Geely has invested heavily in electronic vehicles (EV) and autonomous vehicles (AV). Geely has invested more than CNY 3 billion (USD 440 million) into new energy vehicle technology, providing the company with fully independent new energy power system solutions. Geely has also made a quick move in the commercialization of vehicle intelligence. In 2019, it had the highest rate of vehicle equipment of Level 2 (L2) driving assistance systems among all Chinese domestic brands.

According to Geely’s prospectus, of all the CNY 20 billion of secondary listing plan funding, CNY 8 billion will be spent on the R&D of new vehicle models, and CNY 3 billion will be used for the development of new energy vehicles, connected vehicles and autonomous driving technologies. With ample and continuous capital input, Geely will be able to further improve its products and earn more market share.

Geely, Changan, and Great Wall Motor (GWM) have long been viewed as the ‘big 3’ Chinese independent automobile brands. And they are also the only 3 domestic brands with annual vehicle sales that hover stably above 1,000,000 units. In comparison, Geely had the highest sales in 2018 and 2019. Its performance was relatively more robust during the recession in the automobile market than Changan. GWM, with the most stable performance, has a high reliance on the SUV and pickup truck products. Geely is most likely to grow to an innovative and comprehensive smart vehicle manufacturer, making it the most popular on the capital market now. 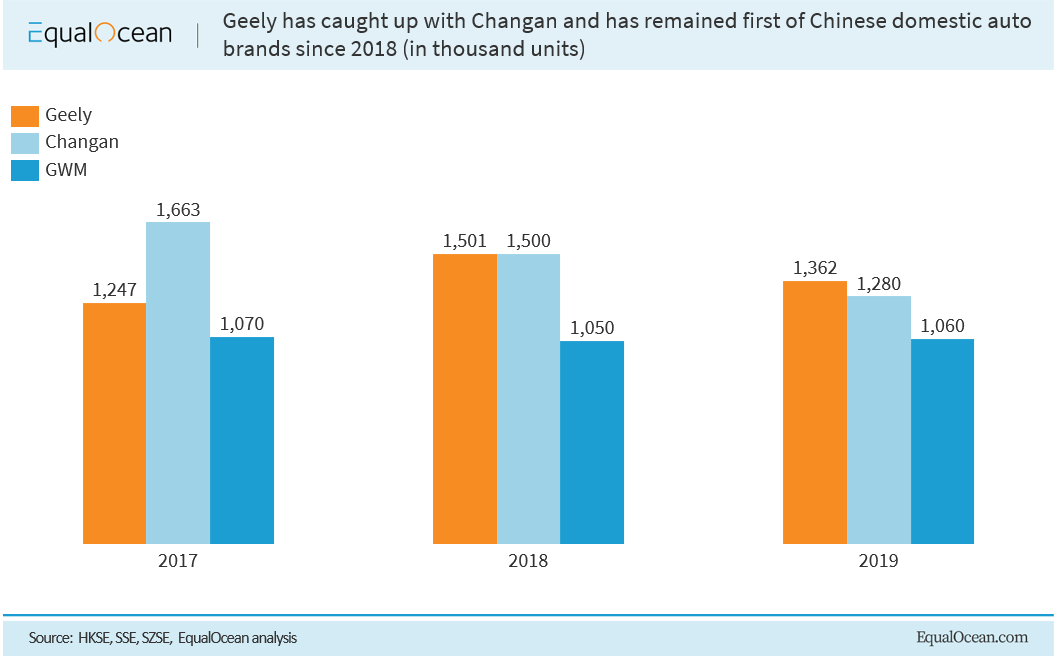 Find an analysis of Changan’s recent development and dilemma here.

Geely’s potential to evolve into a comprehensive automobile company became a lot more promising after the acquisition of Volvo in 2010. With this move, Geely gained the opportunity to enter the premium car market based on the brand value of Volvo. Geely has also absorbed Volvo’s technology in order to incubate new brands.

Lynk, the joint-venture brand of Geely and Volvo, was founded in 2016. Lynk has launched a series of mid-end SUV products. The products integrate the stability and safety from Volvo’s traditional vehicle design, and fresh smart vehicle and new energy technologies based on Geely’s recent R&D. Before August 2020, Lynk’s sales units had sharply grown to make up more than 15% of Geely’s total sales. 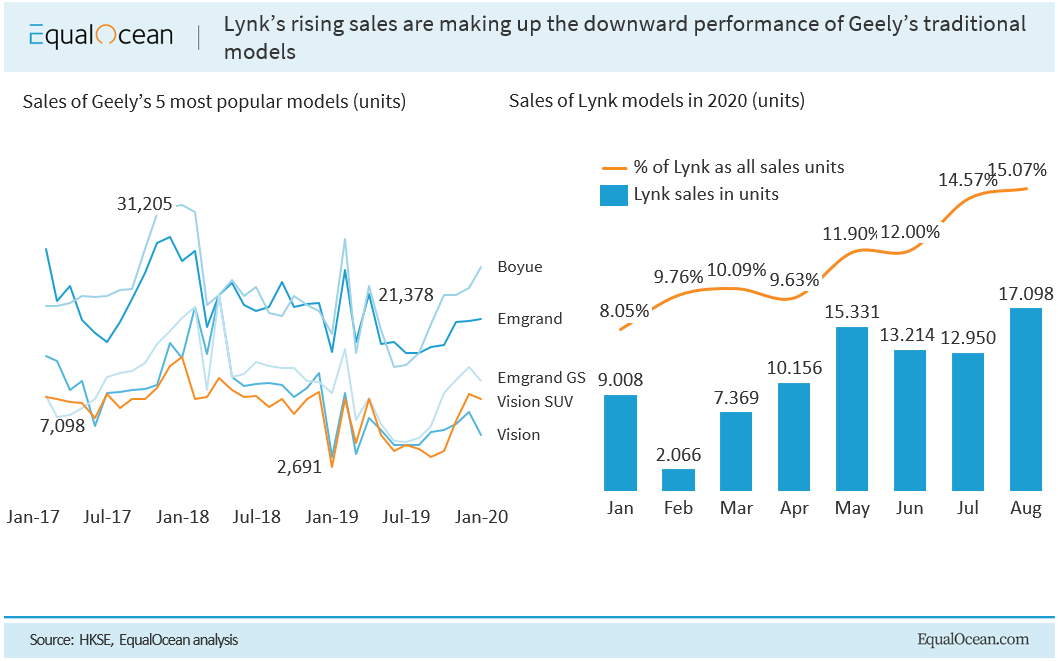 Pushing Lynk to the market shows Geely’s precise marketing strategy. Geely’s most popular models mostly launched before 2015. Their market performance became weaker after 2017. Lynk is not only a perfect platform to commercialize smart vehicle technologies, but also a successor model to stimulate the sales, and further upgrade the Geely brand during model updating.

We see Geely's position and unique strategy in current China's auto industry as the main advantage the company has. In our revenue model, although it will endure negative revenue growth in 2020, we think it will drive 1.5%/2%/2% YoY growth in 2021/22/23 as its new car models launch (six in 2020). In our view, its PMA platform plays a vital role in driving EV growth. Starting from 2021, electrification and digitalization will be the key trends for its existing models. Margins will see a decrease in 2020, given headwinds of pricing pressures due to heating competition and higher R&D expenses, which will pick up in the next years ending 2024 (GPM to 17.5% and EBIT margin to 7.8%). Its JV with Daimler Smart Business and merger with Volvo will help Geely to be a strong player in the high-end market in the domestic and global market. Our Dec-20 PT of HK 18.9 is derived from the DCF model (WACC 7.5%, TG 1.5%), suggesting a 22% upside over the current price of HKD 15.4 closed on September 22. 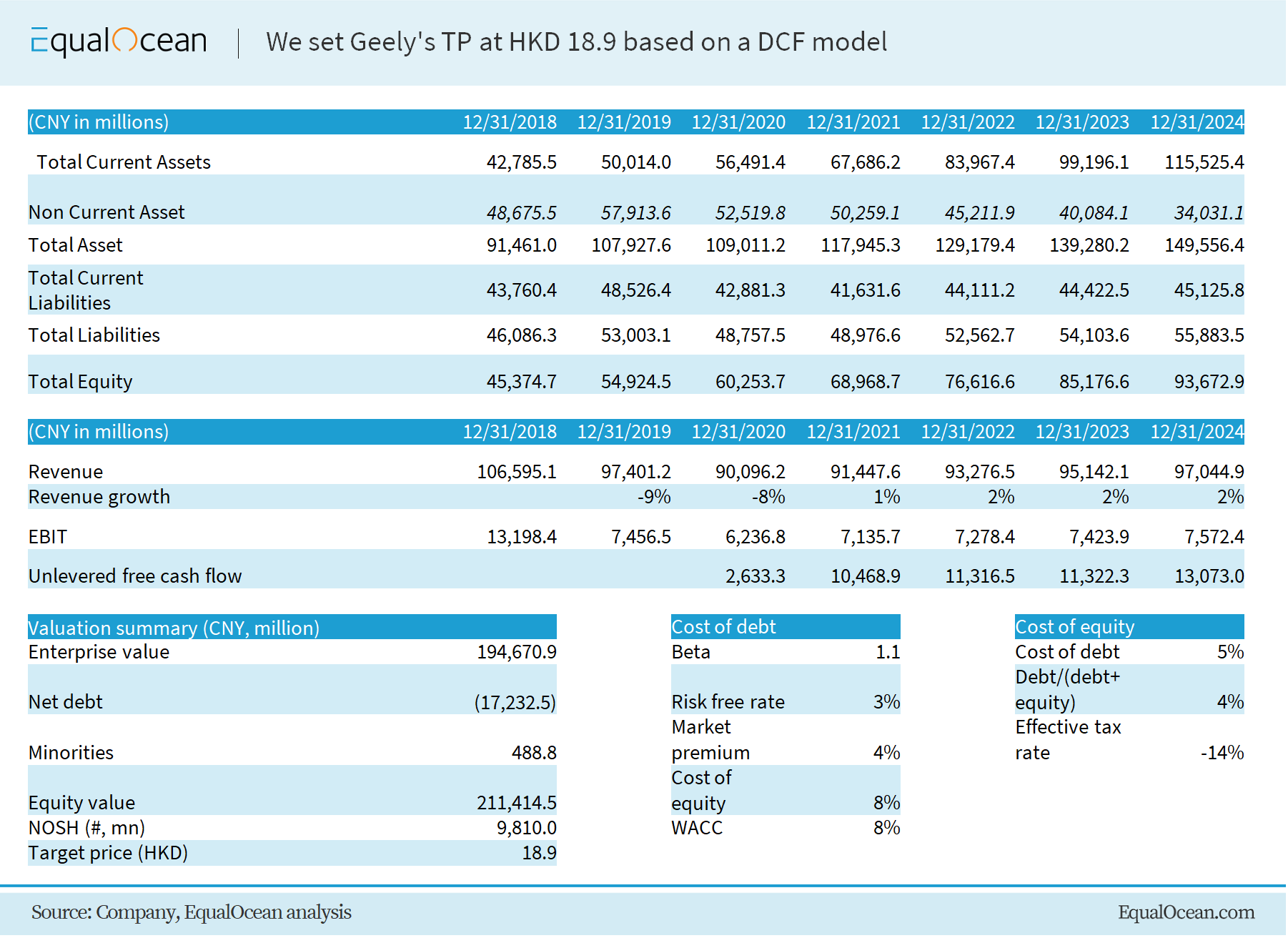