Experienced a price drop in the last month, the US-listed Chinese telco still worths investing in. 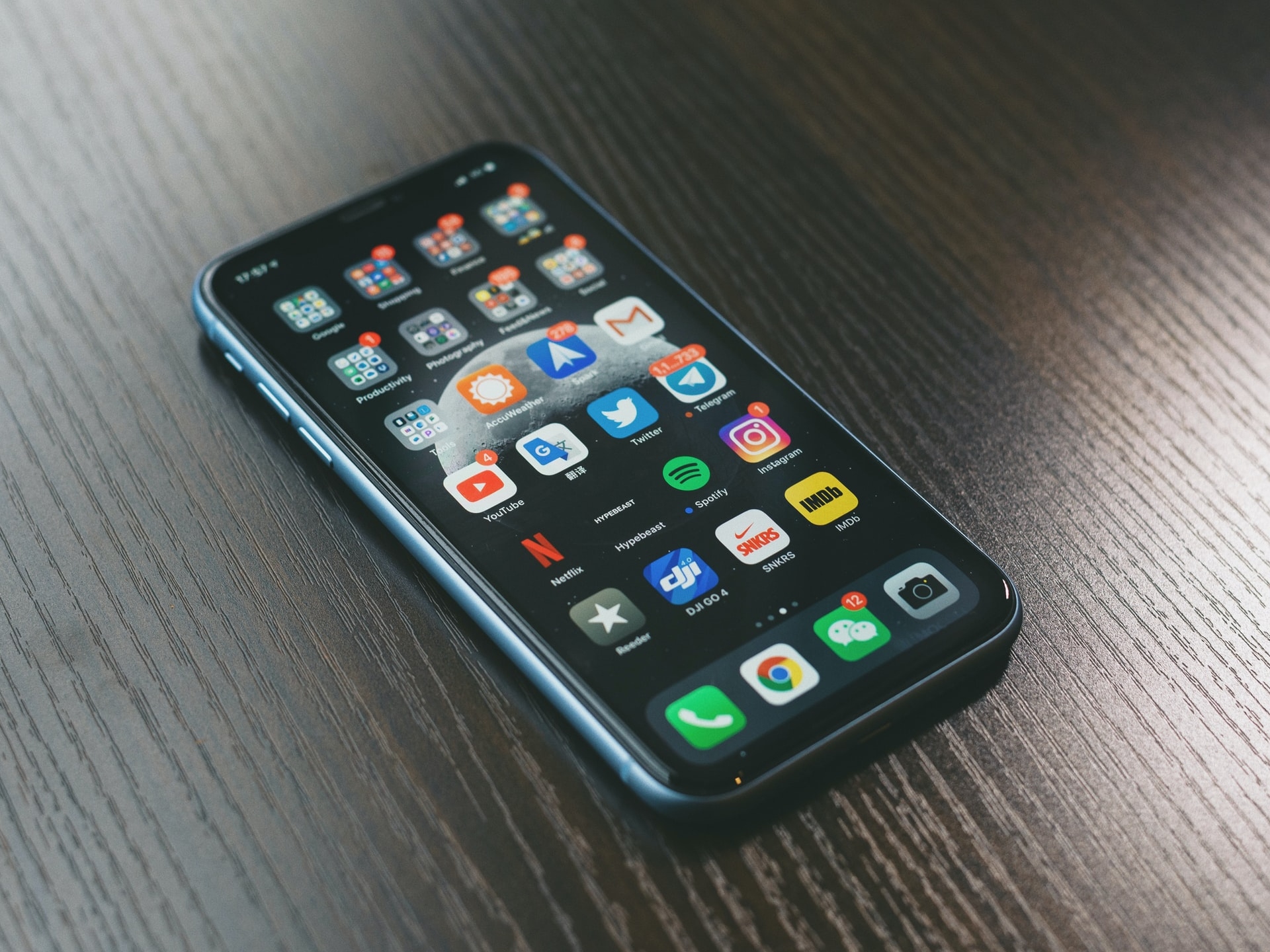 ► China Mobile has declared stable dividends and has the intention to sustain payouts – but cash needed for distribution exceeded free cash flows over the past three years.
► The profitability of China Mobile is better than that of its competitors – but the difference seems to be shrinking.
► 5G network construction is not likely to put too much of a capital expenditure burden on China Mobile – meanwhile, 5G has turned out to be not as profitable as many predicted.
► The telco is undervalued, per our DCF analysis.

Known as the biggest telecom carrier in China – and globally, by the number of subscribers – state-owned China Mobile (CHL:NYSE) provides mobile voice and multimedia services across China's mainland and Hong Kong. Since the COVID-19 outbreak began to hinder global economic growth, adding uncertainty to the markets, China Mobile, a well-valued stock, began to look like an ever more suitable investment target.

Considering external factors, such as the massive 5G rollout and the pandemic, and internal factors, including financial performance and dividend payout records, is China Mobile currently worth investing in? 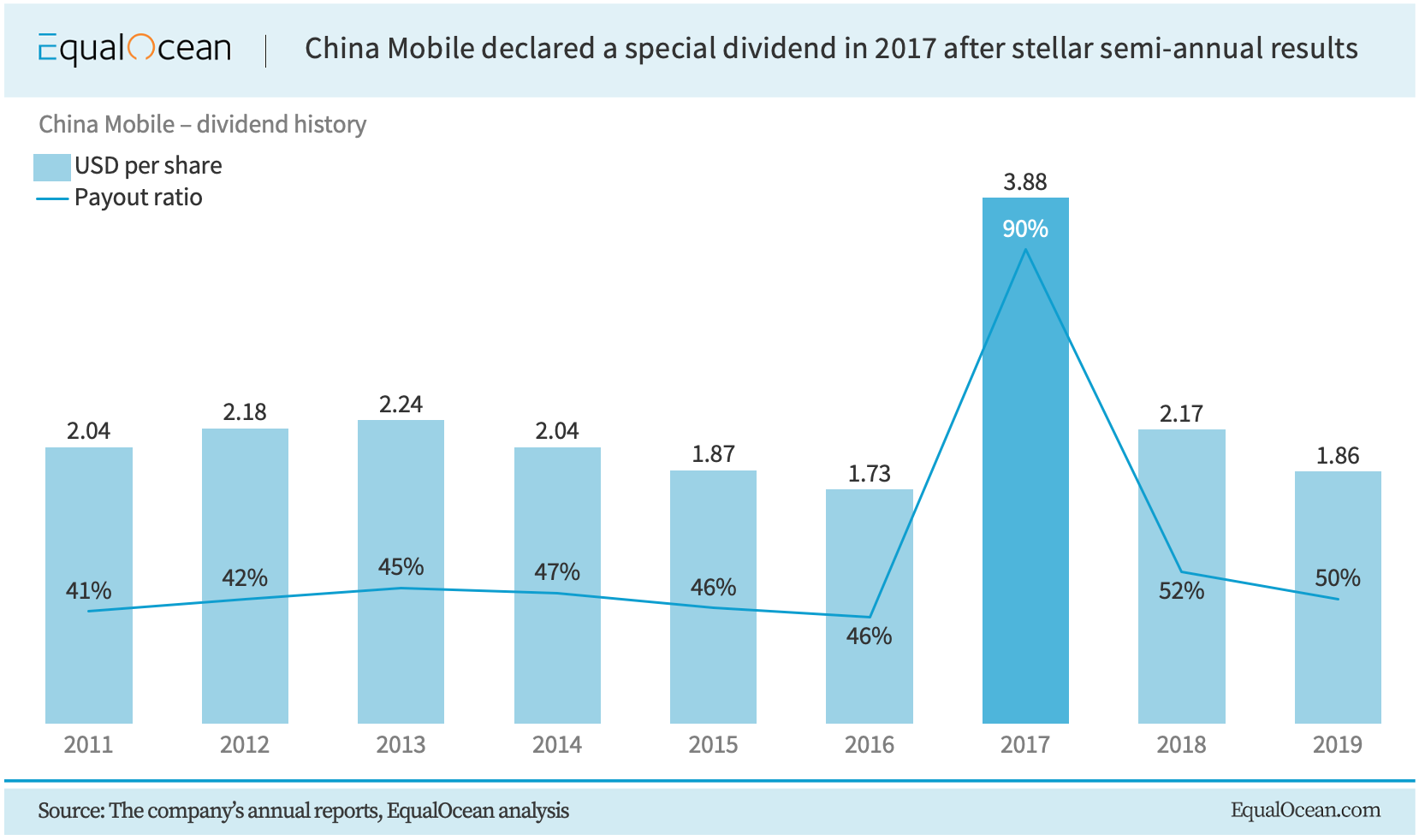 In the last decade, China Mobile has sustained distributed dividends of around USD 2 per annum per share. The single exception happened in 2017. China Mobile declared a special dividend in 2017, proving its profitability and ability to generate healthy cash flow. As of September 11, the company's trailing annual dividend yield was 6.16%, higher than the majority company in the telecommunication service industry. The telecom carrier also has kept its payout ratio between 40%-50% (apart from 2017), exhibiting a more stable proportion than that of China Unicom and a higher ratio than that of China Telecom. Historical profit-sharing seems to be lucrative enough to attract investors who adore regular cash income streams. 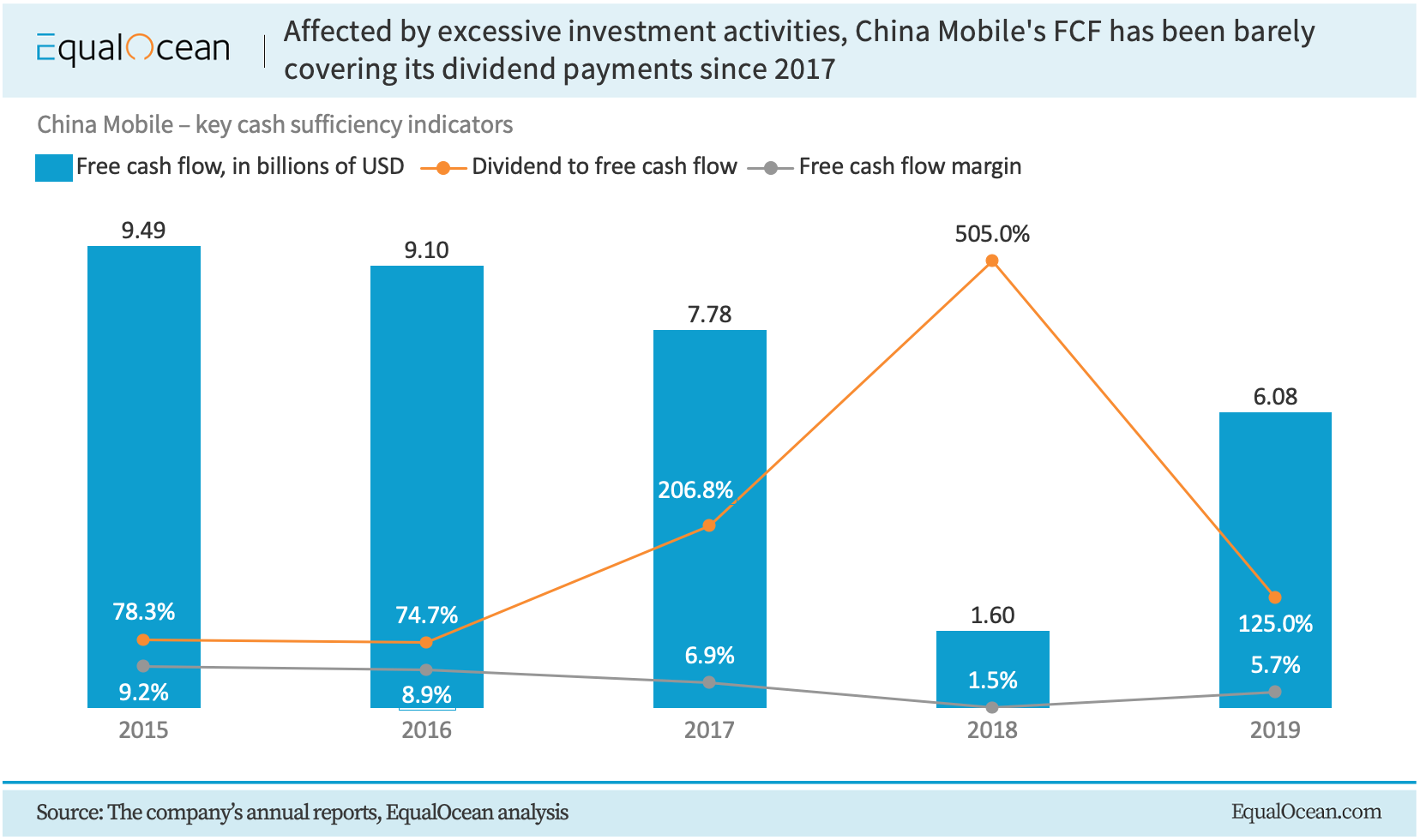 Whether China Mobile is able to maintain dividend payout depends on its free cash amount. From the chart above, we see that China Mobile's free cash flow illustrates a decreasing trend from CNY 9.49 billion to CNY 6.08 billion in the last five-year period, which resulted collectively from investments, dividend distribution, and a gradual increase in capital expenditure. The dramatic drop of FCF in 2018 was mainly because of a rise in investment in Qingniu, UCloud, Xiaomi and other major deals. Therefore, in the last three years, dividend payment exceeded free cash flow to equity holders – this may worry future equity investors if the cash status keeps worsening. However, the possibility seems remote, looking at the current status quo. China Mobile's dividend accounted for 23% ~ 51% of pre-dividend cash in the past five years and furthermore, the cash position has recovered from CNY 57 billion at the end of 2018 to CNY 261.2 billion in mid-2020. Through the centralized fund management policy in China Mobile, it is more likely to ensure the safety of the cash position.

In the last ten years, Revenue of China Mobile achieved constant growth except for a minor drop in 2018, which was due to lower handset data charges and the government's move to cut roaming and long-distance charges. However, the company still realized a more than 3% increase in profit in 2018. The biggest revenue stream – telecommunication services – accounted for around 90% of total revenue in the last decade. 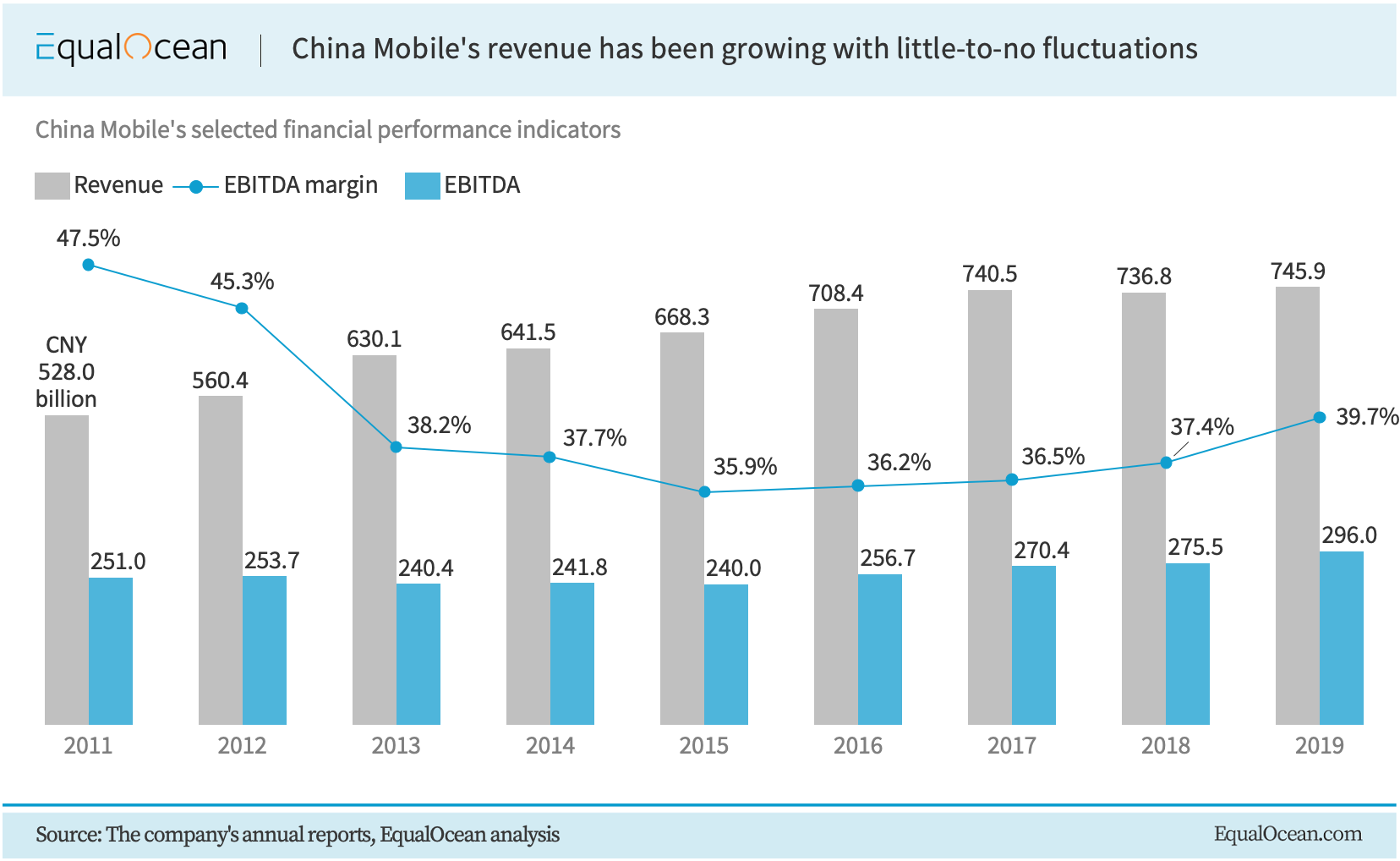 The EBITDA margin stayed between 35% and 40% from 2013 and exhibited a rising trend over the last five years. As a result, the EBITDA of China Mobile rose constantly starting from 2015, recovering from a tiny recession in the early 2010s. The statistics show that total revenue is very likely to keep up its pace in the near future. In 1H 2020, however, China Mobile made only a 0.1% increase in revenue and a 3.6% drop in EBITDA, owing to decreasing roaming data usage during the pandemic quarantine. In comparison, the EBITDA of China Unicom only decreased by 0.1% on a year-on-year basis because of a considerable increase in its number of users. 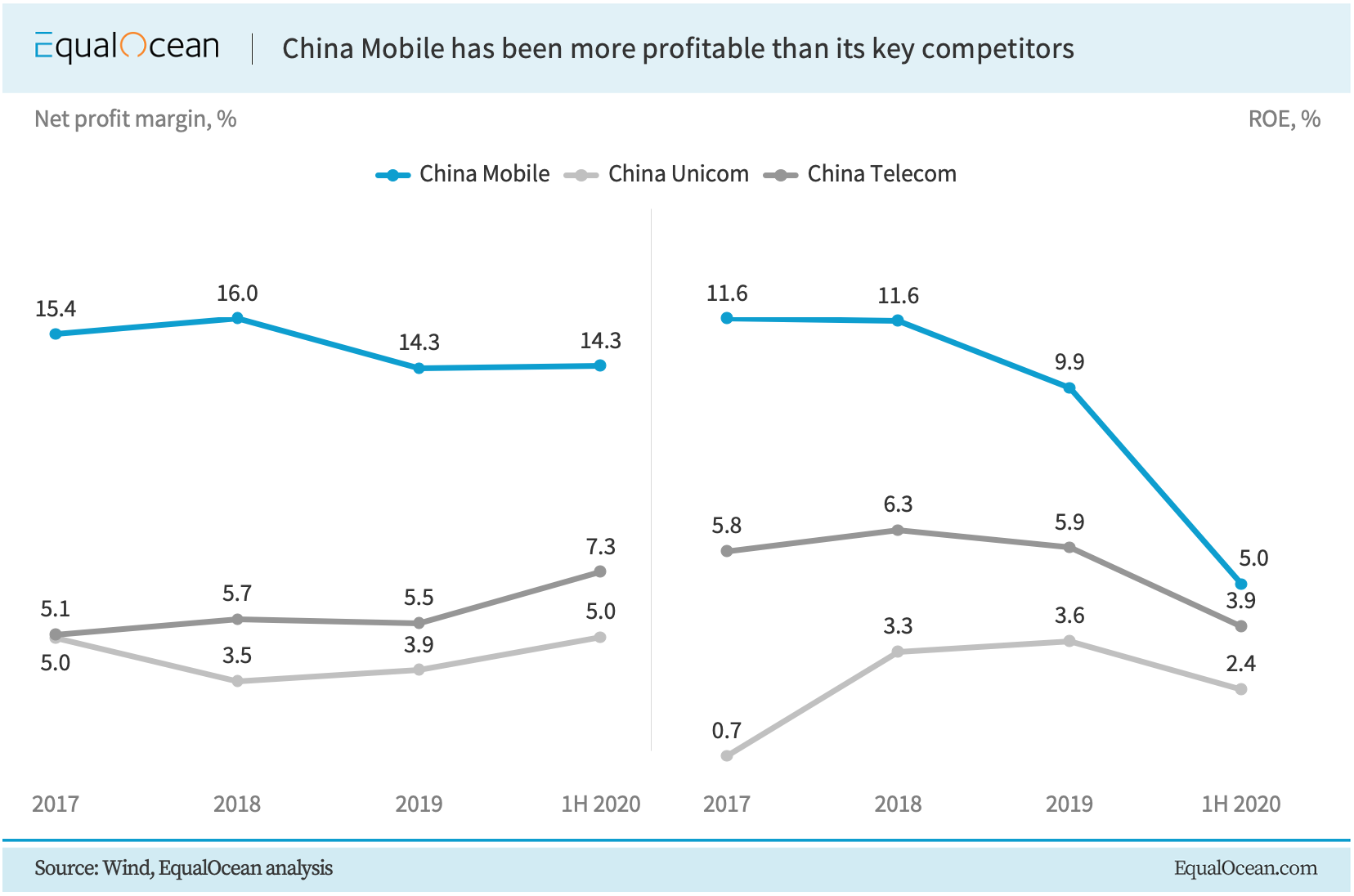 The only competitors of China Mobile are China's other two major telecom carriers. China Mobile has an obviously higher net profit margin than China Unicom and China Telecom, mainly due to its economies of scale. However, the net profit margin of China Mobile seems to have been dropping over the last three years while those of China Unicom and China Telecom have been increasing. This trend may indicate that the telecommunication industry is becoming more competitive and the leading China Mobile may lose its dominance to some extent in the round of 5G competition. Similarly, the return on equity follows the same tendency. Both indicators tell us that the profitability of China Mobile is deteriorating. Yang Jie, the Chairman of China Mobile said, “The company's policy was to maintain a stable payout ratio.” But when profit decreases, this means fewer dividends, which is bad for the share price. Thus, he promised a stable dividend outlook in the following years. Considering together with the cash position, it is unlikely that China Mobile will cut dividends dramatically. 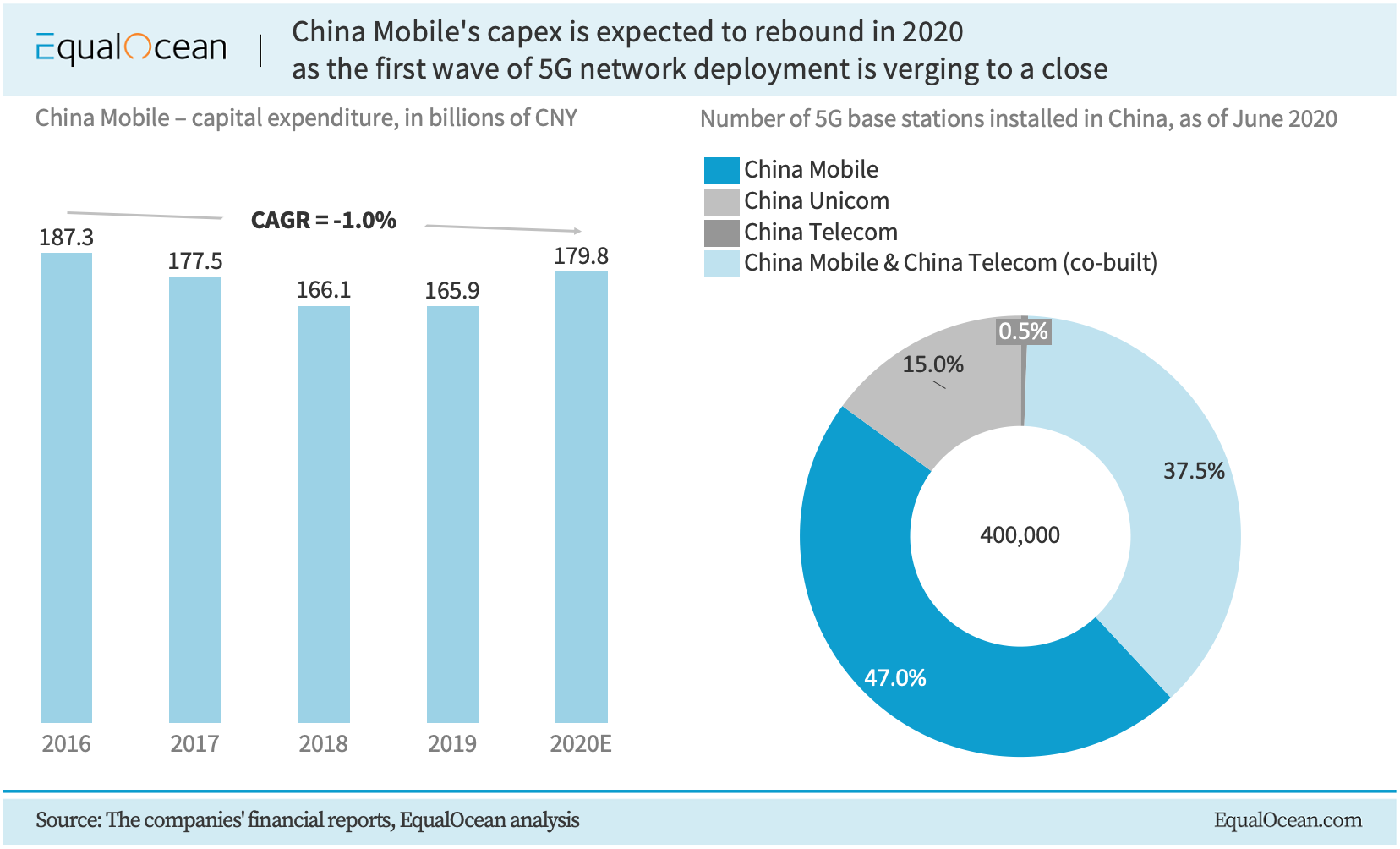 The group planned CNY 179.8 billion Capital expenditure for 2020. We don't see a significant surge in capital expenditure even though the Chinese government is pushing 5G deployment – the budget for 5G increased from CNY 100 billion to CNY 105 billion. Telecom carriers are all trying to constrain their budget around 5G to control the negative effect on financial performance that may cause a stock price drop. China Unicom and China Telecom, for example, completed the verification mode of co-build co-share mode in the 5G commercial environment, cutting the cost of 5G construction for both companies.

The Chinese central government has been directing the telecom carriers to rapidly build out the next-generation network infrastructure. The Global pandemic amplifies the needs of industrial automation, which requires 5G services. Meanwhile, as the US-China tech war intensified over the last year, China was forced to accelerate the development of its strong points and seek greater domestic capabilities. 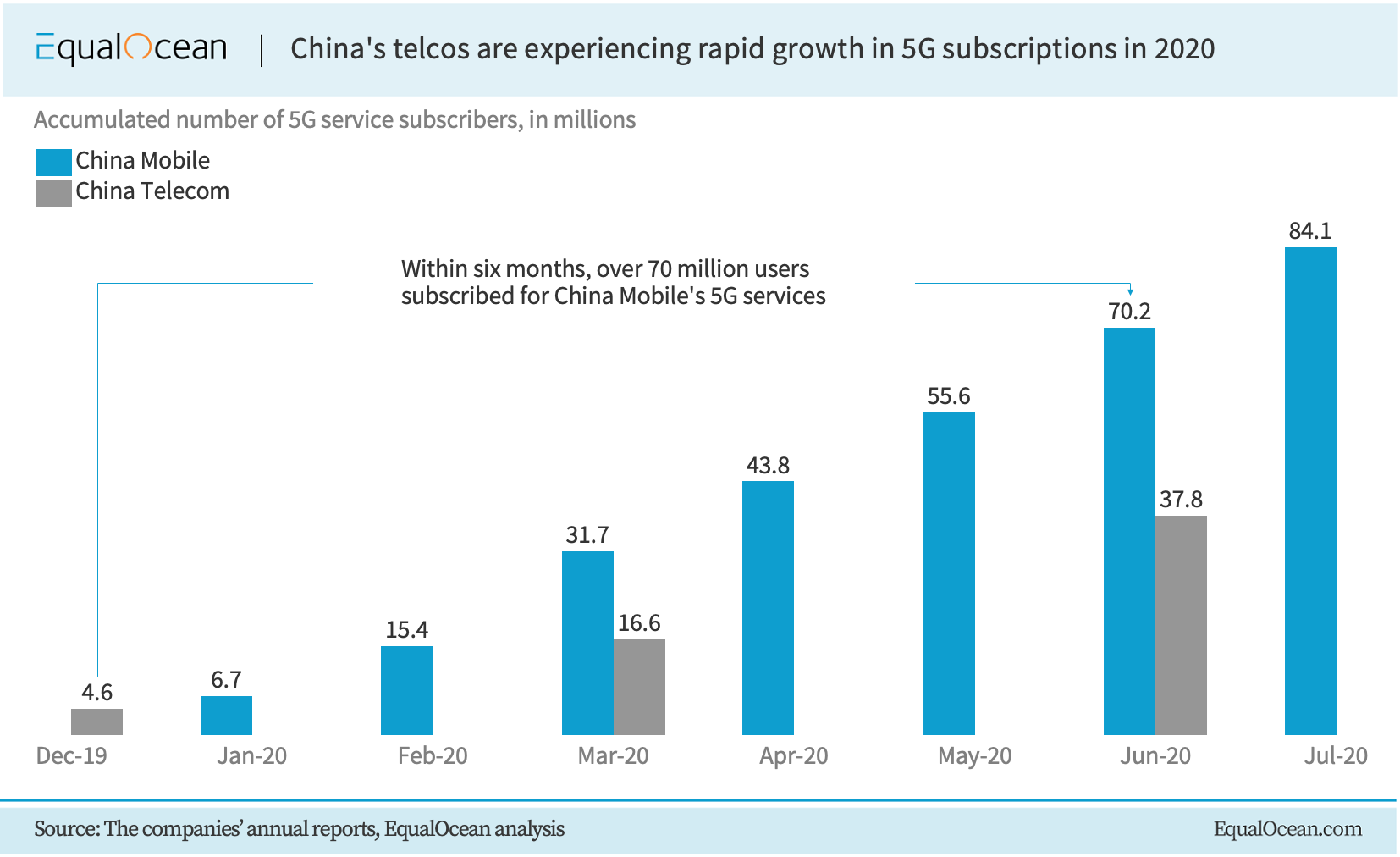 The three telecom carriers are forecasted to collectively spend USD 25.5 billion on 5G deployment in 2020. The biggest operator, China Mobile, was reported to have obtained 70 million 5G subscribers by 1H 2020 and the number is expected to explode in the coming year. However, the company's 5G plans were set originally ranging from CNY 128 up to CNY 599, which is close to existing 4G plans while offering more data. But in 2020, China Mobile was the first mover to give discounts, lowering the price down to CNY 79, yielding the cheapest 5G plan compared to China Unicom's CNY 90 and China Telecom's CNY 103. 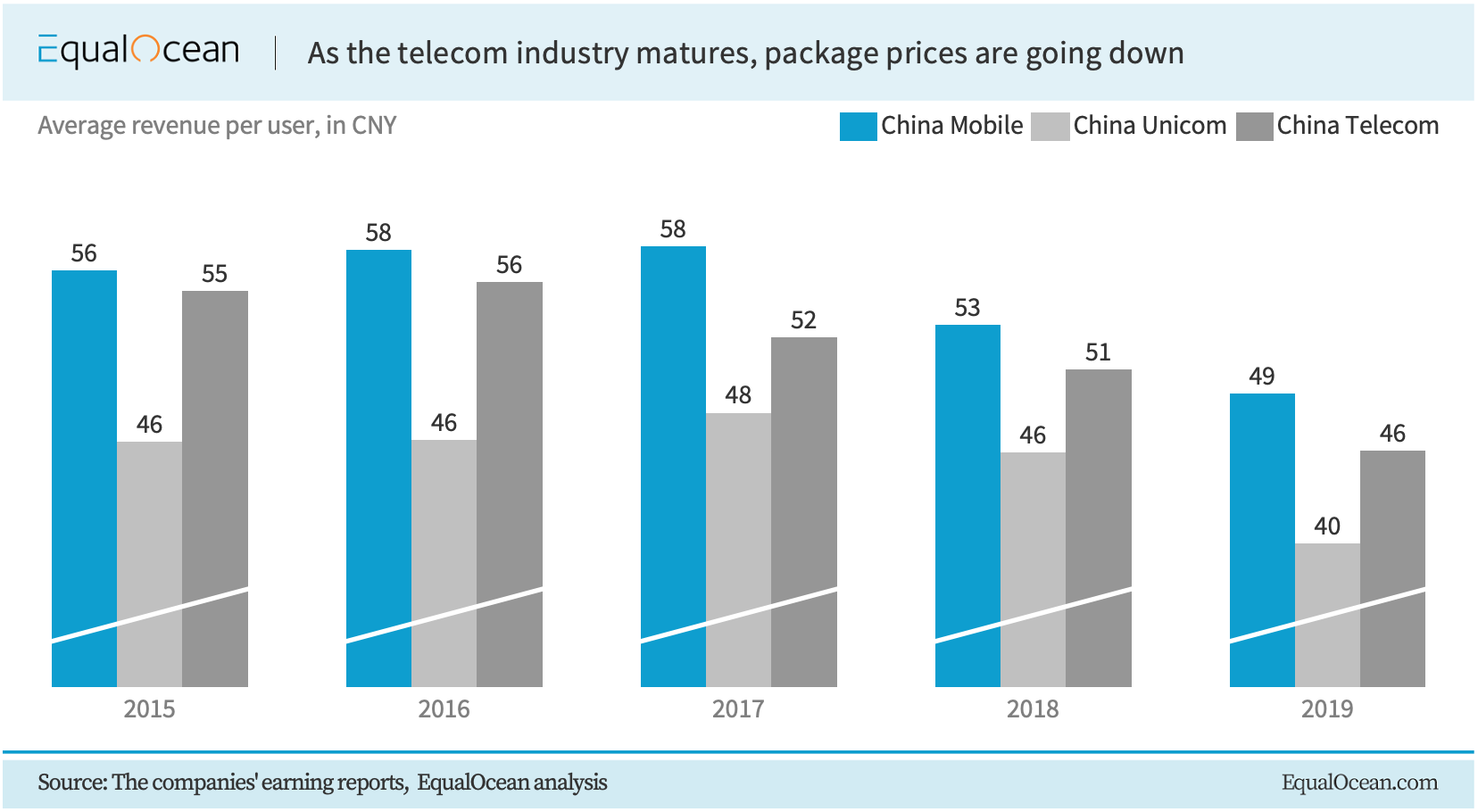 The aim of doing this was to attract 5G subscriptions – but it simultaneously resulted in a profit drop in the first half of 2020. We see that mobile network operators can hardly push up plan prices and meanwhile, capital investment on 5G exerts pressure on profitability/earnings. 5G, a must-have project, doesn't seem to have a positive impact on the company's margins.

In China, the smartphone penetration rate was estimated to be only 50% in 2018. The number is estimated to increase to be 61% in 2023. China Mobile can expect an increasing customer base in the following years. In the first six months of 2020, China Mobile's mobile subscriber increased 1.3% year-on-year while that of China Mobile reduced by 4.6%

In April this year, China Mobile is said to have awarded most of a $5.2 billion 5G contract, which represents 232,143 5G base stations, to Huawei and ZTE. Huawei won 57.3% of the contract across 28 provinces and ZTE obtained 28.7%. The minority went to Ericsson (11.5%) and China Information Communication Technologies (2.6%). During the time when the US-China relationship heats up, we can expect more domestic cooperation between state-owned China Mobile and Chinese telecom vendors.

The nature of large state-controlled corporations shields the companies from counter failure or collapse and thereby provides certainty and safety to investors to some extent. On the other hand, however, since the government makes decisions and gives directions for the company, it may not maximize shareholders' wealth by making optimal investment and operation choices, which is reflected in unsatisfactory financial results.

Using a DCF model, we assume a recovering revenue growth in the coming years and telecommunication evolution taking place every 6 years. Also, we assume that the perpetual growth rate is 2% after 2030. Taking into account growing smartphone penetration and expected 5G plan price elevation, the two-stage model shows the enterprise value equals to CNY 90.49 per share, which is USD 66.54 per ADR. The valuation indicates that China Mobile is an opportunity to earn value gain even though the share price has dropped in recent months.

China Mobile is now going through a hard time as the 5G base station projects, the cheap 5G mobile plans and the worsening trend of its cash position all seem to be threatening the telco's business. However, we still observe that the company has a high profit margin, abundant cash reserves, stable and promising dividends, dominant market share and high valuation provide investors with a smooth yield. Thus, we propose a buy rating for China Mobile after all analysis is considered.