Are offline pharmacies still your preferred way to buy medicine? Many Chinese can get urgent drugs delivered to their door via WeChat. Ding Dang Kuai Yao’s CNY 1 billion Series B further is further proving the efficacy of this business. 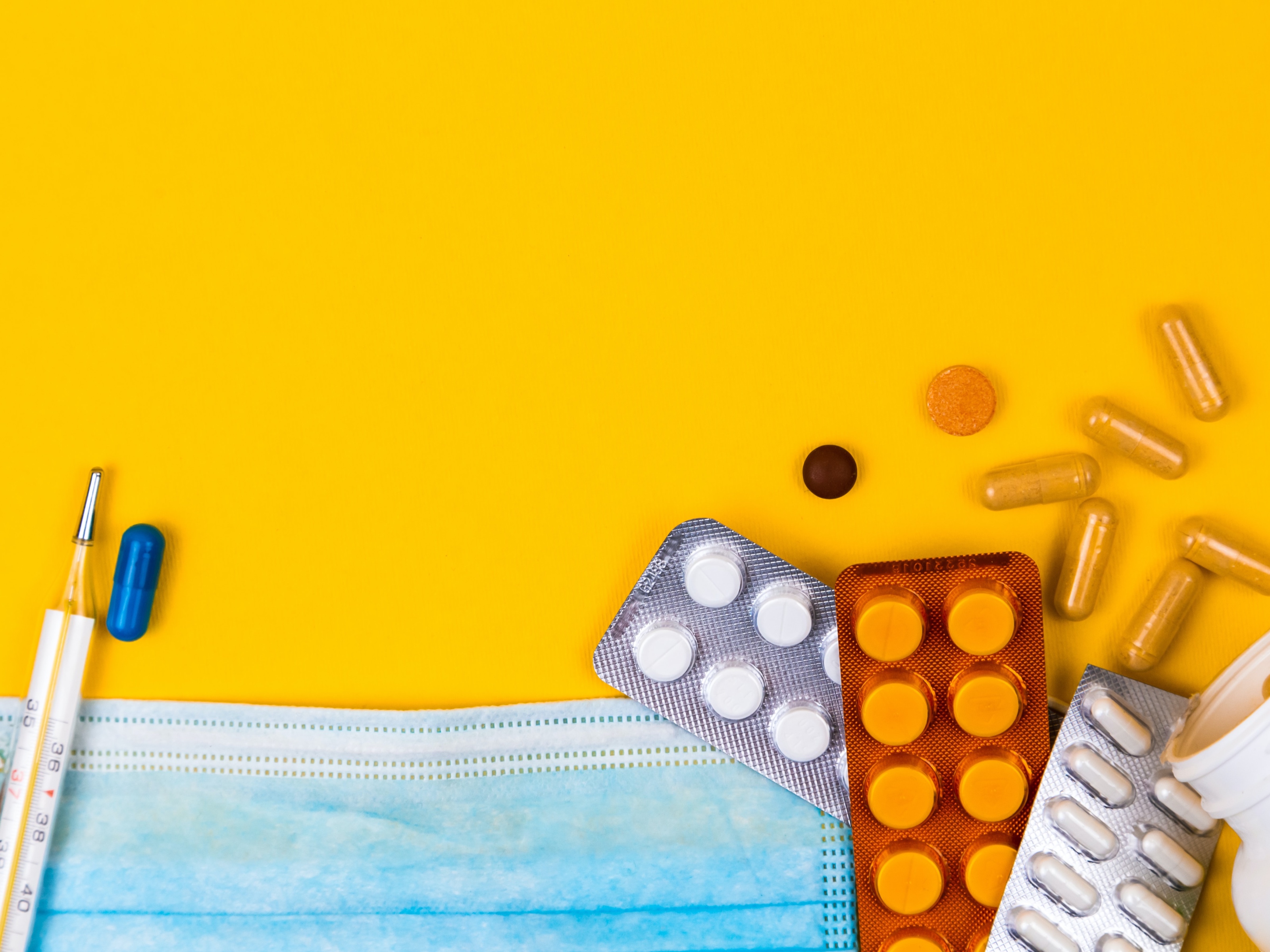 ►It has built an Internet-based business ecology, with an anchor on the back-end logistics M2F platform. With insights and experience of the distribution area in China' drug market, it grabbed the gist by prioritizing tier-one or -two capital cities in China.

The Chinese O2O pharmacy delivery platform, Ding Dang Kuai Yao, recently announced the close of a Series B+ at an amount of CNY 1 billion. The bankroll is destined to boost a civic roll-out project called &lsquo;thousands of cities, tens of thousands of shops.&rsquo; The company expects its service radiation to cover tier-1 to -3 target cities throughout the country by the end of 2020.

So here come the questions: What is it about? How will it win the favor of millions of users? And how can it withstand the market predations of Internet-backed giants?

Ding Dang Kuai Yao is not a new name in the Chinese Internet healthcare industry. It was established as early as in September 2014 and has raised a fund every year since then. The startup received CNY 5 million from Renhe Yaoye (000650:SZ) in an Angel round in 2014, followed by a pre-Series A of several tens of million from Chun Feng VC (Chun Yu Doctor&rsquo;s Corporate VC) in 2015. As the online-to-offline (O2O) concept heated up in 2016, more cornerstone investors stepped in to join the investment, big names such as SoftBank China and CICC.

What is the business logic?

Ding Dang Kuai Yao is an O2O platform delivering medicines or other daily medical supplies for online users. The way it works is quite simple. Whenever users want to buy medicines but don&rsquo;t want to go out, they can just order on the Ding Dang Kuai Yao platform in the form of the WeChat Mini Program or the App. Then they can wait for the products to be delivered to the door.

The traditional O2O concept is that businesses use online tools to aggregate target users. As it developed further, more consumer-centered O2O variants emerged, providing on-door services, including food delivery and online-ordering car. Ding Dang&rsquo;s medicine delivery is one type of these upgraded O2O models, solving the pain of the &lsquo;last mile&rsquo; issue.

That Ding Dang Kuai Yao started this business has something to do with its background. Its founder and the CEO, Mr. Yang Wenlong, is also the CEO of Renhe Yaoye (000650:SZ) &ndash; a pharmaceutical developer, manufacturer and retailer. Renhe Yaoye focuses on the manufactory and distribution of medicines and medical supplies, especially some days counter (OTC) products. In those days, these OTC products are only available at pharmacies and usually sold out, which is a hassle for customers with urgent needs. 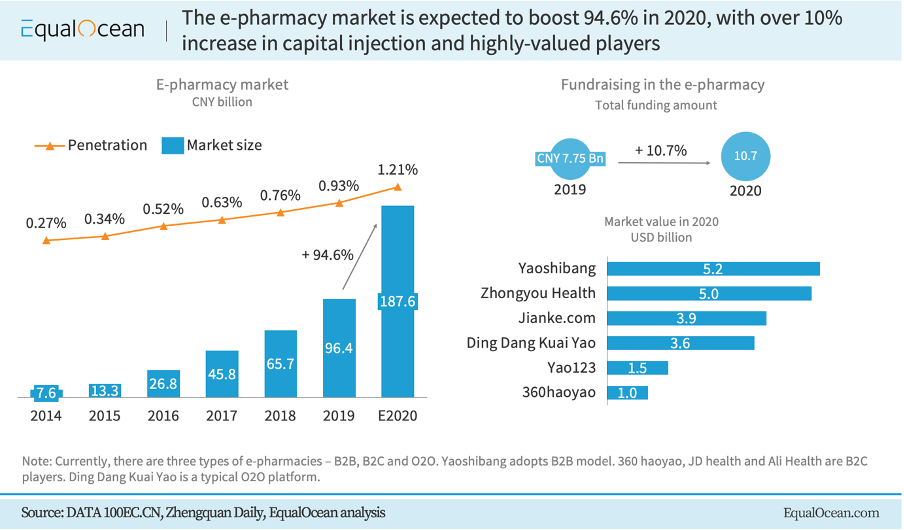 Although Internet-based O2O is not a new operation model, the success factor to excel in the speedy drug delivery lies in computing power and the delivery capability. In the beginning, Ding Dang sought an extensive fast roll-out by concentrating on the establishment of its platform, connecting online users and offline pharmacies. The computing power and initial user consumption pattern accumulated at this stage. Later, Ding Dang built its own offline supply pharmacy and delivery team because it realized the bottleneck of the role of an online platform &ndash; it being hard to push third-party pharmacies and control the delivery.

Up to here, we see that Ding Dang stands out from a mature healthcare retail business because it grabs delivery based on the deep understanding of user pains and consumption behaviors.

How profitable is this business? 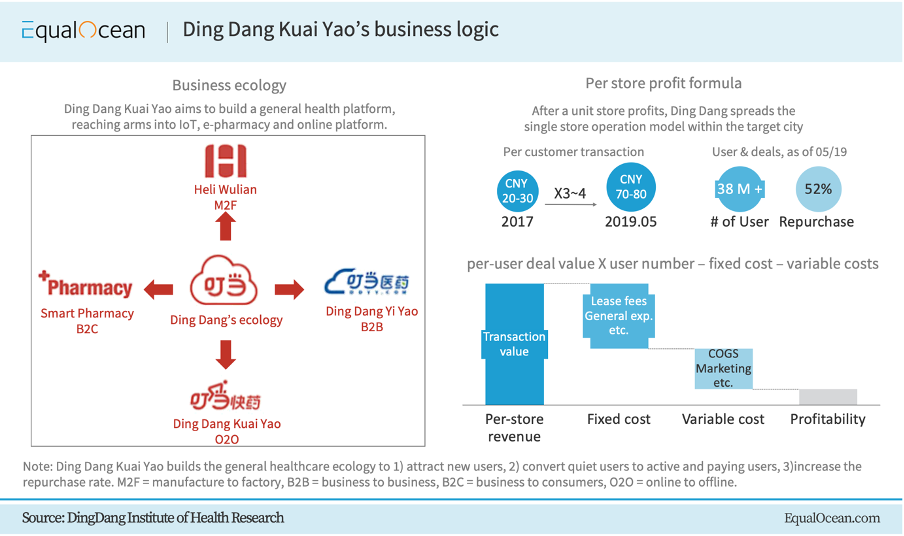 Its revenue comes from an online order, so the per-user deal amount and user number are the two main growth drivers. The per-user deal value is around CNY 20 &ndash; 30 for a new user and usually increases to CNY 70 &ndash; 80 later, with a repurchase rate at 52% as of May 2019. In terms of the user number, it depends on the radiation range of a single shop. The community Ding Dang store can cover a 500-meter radius area and the offline pharmacy can cover a five-kilometer radius. Compared to increasing offline stores, it is easier to increase the deal value amount per user by providing more discounts and diverse product portfolios.

From the perspective of cost, Ding Dang has different functions to reduce each type of these costs. For the medicine cost, it has access to the wholesale or the ex-factory price by its flexible supply chain (FSC), in cooperation with many drug makers, and self-manufacturing. Moreover, its offline stores are mostly located in cheap-priced areas instead of popular street corners, which can save 75% of lease expenditures per year. The variable cost primarily pays for the delivery fees, which can be reduced by optimizing the back-end matching system.

After years&rsquo; accumulation, Ding Dang Kuai Yao has established a stable triangle pillaring the online e-shop, offline smart pharmacy and full-time delivery. Based on this ecology, it can ideally deliver medical goods from its own shops using its own delivery man &ndash; the seamless cooperation efficiently reduces the waiting time and fulfills the &lsquo;fast delivery&rsquo; promise. 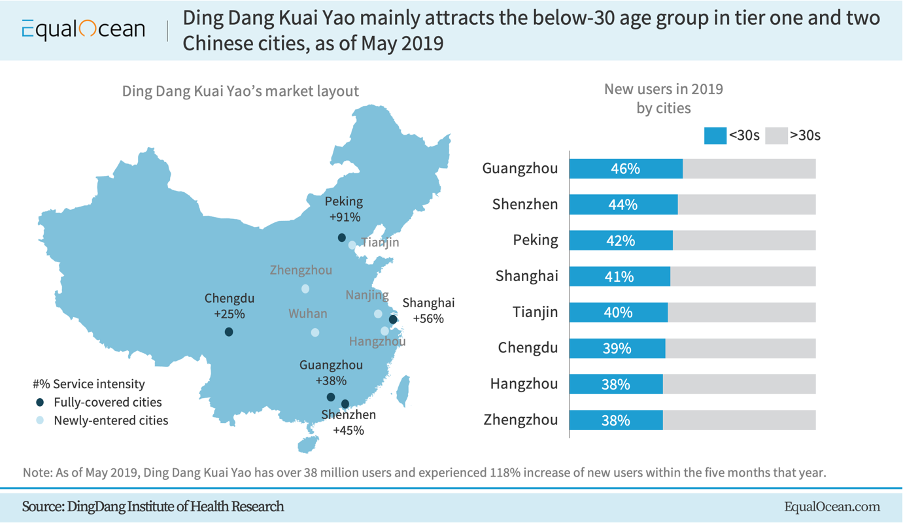 In 2019 October, Ding Dang Kuai Yao almost covered the whole Beijing market with its only 100 offline pharmacy shops. Starting from the capital city, it then conquered Shanghai and other tier-one capital cities characterized by dense population, fast-paced lifestyle and young people. As of the end of 2019, the online drug delivery platform had served over 100 million users, a 73% up from the year before, and increased 52% service intensity (calculated by user number divided by service coverage).

The popular user growth model is commonly known for &lsquo;AARRR,&rsquo; short for &lsquo;acquisition,&rsquo; &lsquo;activation,&rsquo; &lsquo;retention,&rsquo; &lsquo;revenue&rsquo; and &lsquo;referral.&rsquo; However, Ding Dang Kuai Yao adopts a user growth strategy somehow different from this typical model by prioritizing &lsquo;retention&rsquo; at the first stage. It first satisfies a small number of users, leveling up the retention rate to a new high, and then acquire new users. This strategy works effectively in China because users never have too many medicine delivery platforms &ndash; what they lack is high-quality user-centered service when they need some supplies immediately.

From Ding Dang&rsquo;s data, users with three receipt addresses increased 103%, those with four addresses up 94% and five addresses up 88%. It indicates that the mainstream of the current users has the potential to advance to core users with more potential consumption situations. And the drive behind this user growth comes from the &lsquo;RAARR&rsquo; logic based on the business logic prioritizing &lsquo;fast delivery&rsquo; service quality. In terms of the waiting time, Ding Dang&rsquo;s users averagely need 24.85 minutes before the on-door knock while other users on other platforms need at least 50 minutes. The large gap makes a significant difference.

Following the anchor step of retention, Ding Dang Kuai Yao has started to cultivate its online content community, like all other healthcare e-commerce. It is building an omnichannel network, showing up in phone users&rsquo; break time via all types of media: news channels, social platforms, short-video platforms and self-owned publishing sites. As of July 2019, it had accumulated a total of over 150 million views, including 23% of users&rsquo; sharing. DingDang Institute of Health Research&rsquo;s data shows that users tend to focus more on daily topics such as healthy life tips (29%) and supplementary medications (17.6%).

For the traditional franchise pharmacy brand, it will be harder for them to merge online compared to Internet-based online healthcare platforms. These offline stores not only need to cater to Chinese consumers&rsquo; online shopping behavior but also digitalize their physical street stores. The consumer-oriented online sales is an unstoppable trend, indicated by the increase from 1.6% in 2014 to 5.1% in 2018. In terms of user acquisition, Internet companies have natural advantages in the dynamic online community. O2O platforms such as Meituan and Ele.me, together with online healthcare e-commerce brands like JD Health and Ali Health.

However, Ding Dang Kuai Yao is not in a pure competition relationship with these Internet players but in a &lsquo;coopetition&rsquo; business relation. Besides launching its own App and mini program on WeChat, Ding Dang Kuai Yao also settled on the O2O life service platform (Meituan and Ele.me), online healthcare (Ping An Good Doctor) and some top e-commerce (Tmall, Taobao and JD.com). Among this cooperation, Ding Dang works with O2O platforms the best &ndash; one reason is that they both can satisfy users in a timely manner.

Thus, Ding Dang Kuai Yao is fighting against other platforms for online traffic while concurrently work with them as an online vendor.

Now we have a new outlook of Ding Dang Kuai Yao&rsquo;s business strategy. After it cultivated the reputation of &lsquo;fast delivery,&rsquo; what it has been doing is to extend the arm along the professional medical service chain.  Based on the &lsquo;fast&rsquo; business logic, it has started to deliver prescription drugs, together with online consulting, and on-door medical services by sending nurses and physicians.

Different from other &lsquo;all-in-one&rsquo; healthcare platforms, speed and professionalism are two features Ding Dang has been trying to the extreme. The core competition faced by Ding Dang lies in the integration capabilities of the online and offline parts.