The firm did not see much profit during the first three years of its establishment, as other top competitors already occupied the popular business around consumer UAVs. As a result, EHang is trying its best to innovate in industrial UAVs. 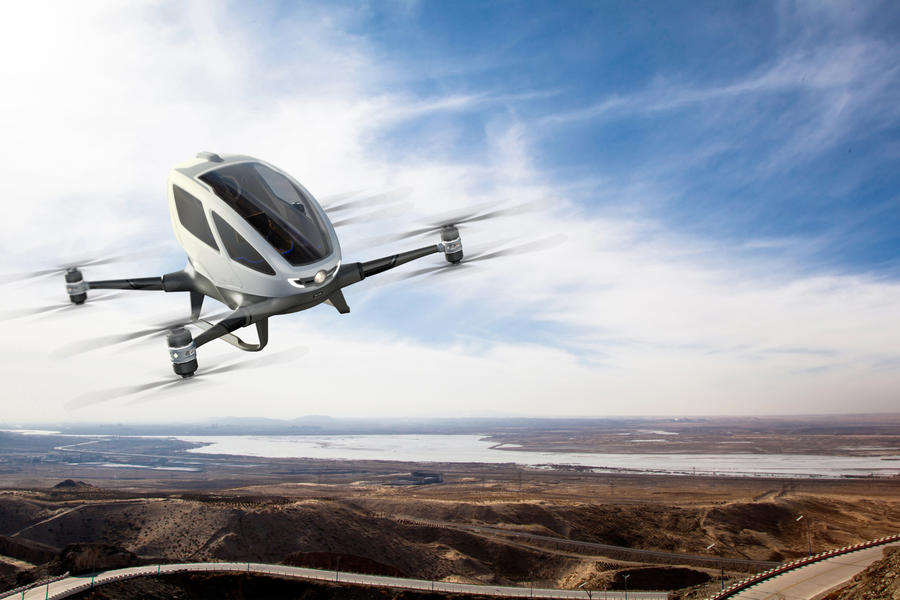 ● EHang's revenue increased dramatically in the third quarter of 2020, which boosted its share price further.

● Unmanned aerial vehicles' (UAVs') recent growth not only relied on external factors like an increasing market dynamic in the UAV industry and urban air mobility (UAM) sector, but also self-innovation in terms of government support, sightseeing and logistics.

● Three elements might be detrimental for EHang's innovation – less profit from logistics and air media, threats from competitors and unstable regulations.

● In the ever-changing market, EHang is likely to try to find a more distinct way to promote its products and meet challenges.

EHang, a tier-one autonomous aerial vehicle (AAV) technology firm, has been selected as a member of the European Union's AMU-LED (Air Mobility Urban-Large Experimental Demonstration) on January 21, 2021, which is one of Europe's largest demonstration projects. From 2020 to 2022, this AAV technology firm will execute a test run of its AAV – EH216 in Spain, the UK and the Netherlands.

EHang did not get good returns in the first three years, as it was still on the way to improving its competitiveness. After 2017, there was a dramatic increase in its operating income – especially in 2019, when the number reached 102.06%. This was mainly due to the firm's attempt to develop urban air mobility (UAM), which accounts  for 72.2% of Ehang's total revenue in 3Q 2019. The favorable turn was in 3Q 2020, when the UAV firm's total revenue reached CNY 70.98 million, a rise of 104.3% compared with the previous year. Moreover, its loss in operating income was gradually decreasing, and with the UAM sector's expansion, it will gain more profit in the future. 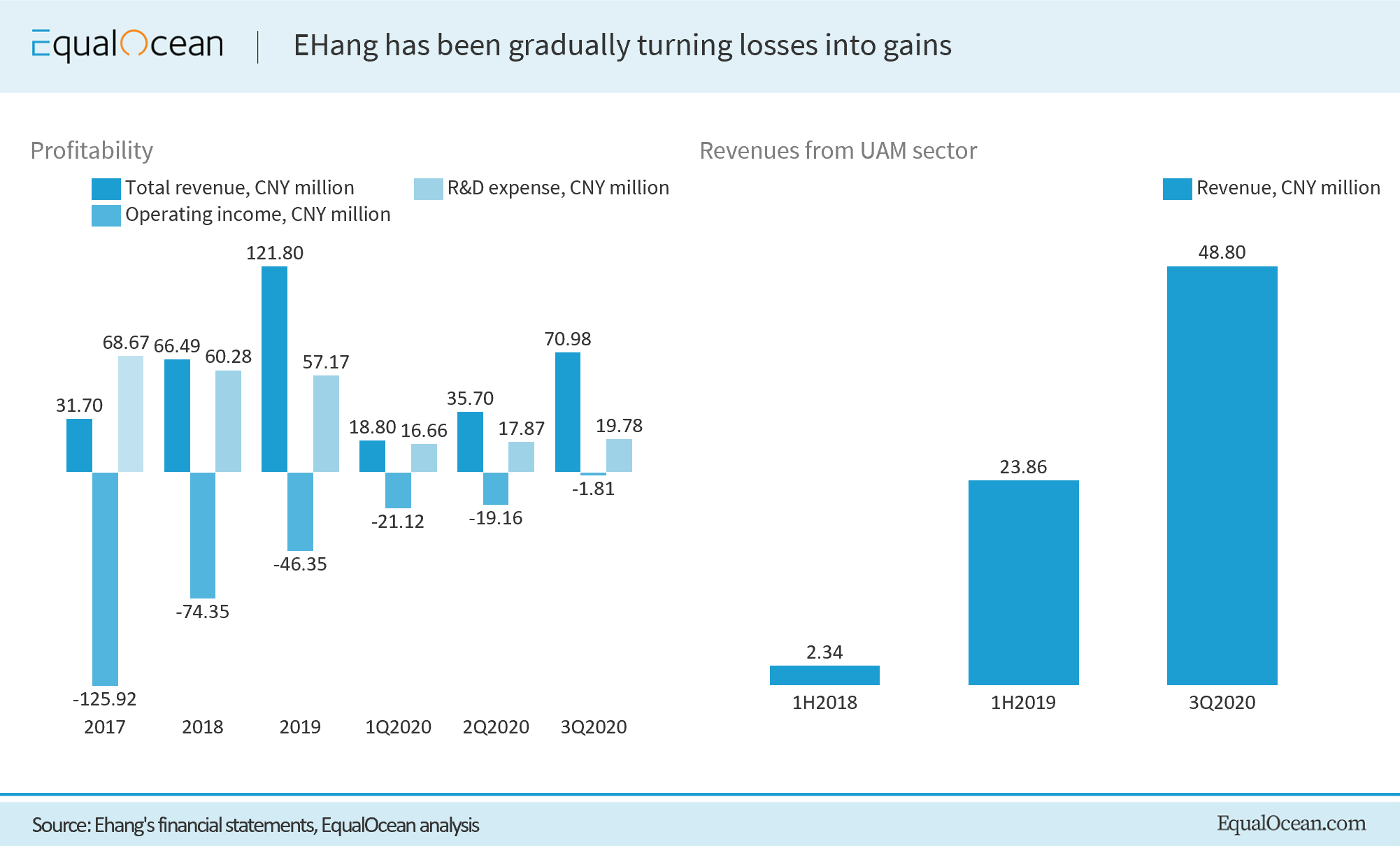 After EHang published its 3Q financial statement, its share price increased 34.87% from USD 13.45 to USD 18.69 on December 7, 2020, breaking through USD 1 billion market value. Compared with other China concept stocks, its year-to-date return was the highest in January 2021, 75% higher than the second one, showing its promising profitability. 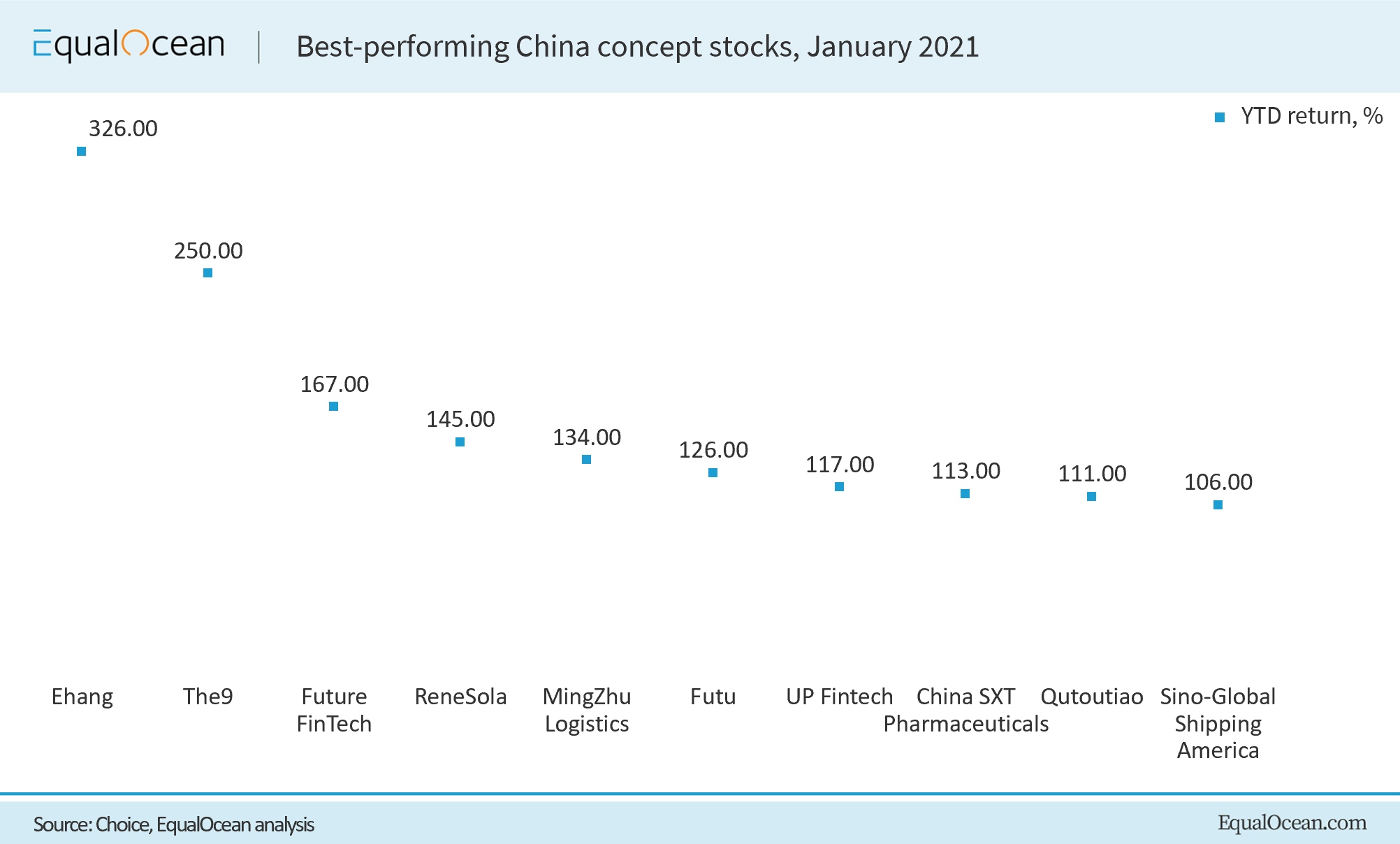 EHang's rapid development could be led by three vital factors – the increasing UAV industry, the UAM sector's rising market scale and the company's own innovations. Firstly, the UAV industry has benefited from government support and key technologies' rapid reformation in chips and flight control systems, which showed a persistent upward trend in the last seven years, an average increase of around 57.72%. However, the consumption side of UAVs has gradually become saturated, which might slow the overall growth rate, and the market scale is expected to reach USD 62.46 billion by 2023. Second, an increasing market scale for the UAM sector. UAM generally means a safe and efficient vehicle system for passengers or freight transport. According to Frost & Sullivan, UAM's market scale would reach USD 103.68 billion by 2023, and China would become the largest market, occupying 46% of global market scale at the same time. Based on this promising market, SMIC started focusing on the AAV, an aircraft used to carry passengers and goods, emphasizing full-automatic unmanned driving. Furthermore, Roland Berger, a consultancy, believes that 160,000 aircraft would begin serving the UAM sector and generate USD 90 billion in 2050. A leader in China's UAM sector, EHang's products have completed thousands of flights in three continents, seven countries and 23 cities so far, gaining airplane clearance from the Federal Aviation Administration, Civil Aviation Authority of Norway and Canada's Department of Communications. Lastly, innovation. As EHang joined this industry later than other players – DJI, which focuses on consumer and military UAVs, and XAG that specializes in agriculture, so EHang is trying to find different ways to develop. Except for the UAM sector, it also focuses on smart city management and air media. Air media is more about light shows. In this the company broke a world record in February 2017 with its light show of 1,000 flights. Moreover, the firm partnered with Greenland to promote sightseeing tours on December 20, 2020. Intelligent city management and UAM prospered with the industrial UAV industry, which is expected to reach USD 33.5 billion in market value by 2022. Compared with the consumer UAV, the industrial UAV has robust functionalities and could help governments inspect and monitor. Hence, there were government policies such as 'The 13th Five-Year Plan' and 'Made in China 2025' to promote industrial UAV growth. Due to the government's favourable policies, EHang is making more effort in the industrial UAV industry to innovate and develop itself. Smart city management is often concerned with providing traffic management and security testing for governments. While the UAM sector and the UAV firm emphasized AAV and UAV logistics, logistics only accounted for 13.9% in 2019. Nevertheless, in a market with increasing labor costs and decreasing demographic dividends, the traditional logistic industry cannot meet clients' rapid and accurate demands. As a result, UAV logistics could help improve logistics efficiency and lower costs. Once the UAV logistics starts a massive commercial application, it will help EHang to gain more revenue. Even if EHang presents its uniqueness in its innovation, the risks can't be ignored. Firstly, air media and UAV logistics did not make considerable contributions to the firm's development. According to the 2019 data, sightseeing and logistics only occupied 7.5% of the whole UAV industry. For instance, air media has a lower barrier to entry, which means many UAV firms or other industries could carry out this kind of business. Secondly, there is the challenge from competitors. For UAV logistics, XAG has also strengthened its layouts. It produced a product with Airbus named Vesper, which utilizes food delivery and expresses delivery in the air. Moreover, for smart city management, DJI also fights alongside firefighters, joining over 200 rescue cases in China. To maintain competitiveness, EHang has had to keep innovating. Thirdly, UAVs' safety and relevant regulations. Since there are fewer laws and regulations for UAVs in the market, UAVs' cruise-ability and safety may remain in doubt. Last but not least, the public's doubt in the firm's profitability. Recently, short-seller Wolfpack Research accused EHang of boosting its stock prices by fictitious sales contracts. Although the firm made some prospective statements after the fraud claim, it hasn't gained customers' confidences back.

As a 'latecomer,' EHang continues to explore new markets with flexible methods and mindsets, which should become a significant advantage for it to compete in the market. Even if the UAV industry does not convey a clear development path, it will show enormous potential once regulations are standardized. To catch up with the ever-evolving market trends, EHang should keep innovating to differentiate itself from other players.