The chipmaker experienced significant growth in the last quarter, owing to the strong demand for smartphone chips, especially in the Chinese market. 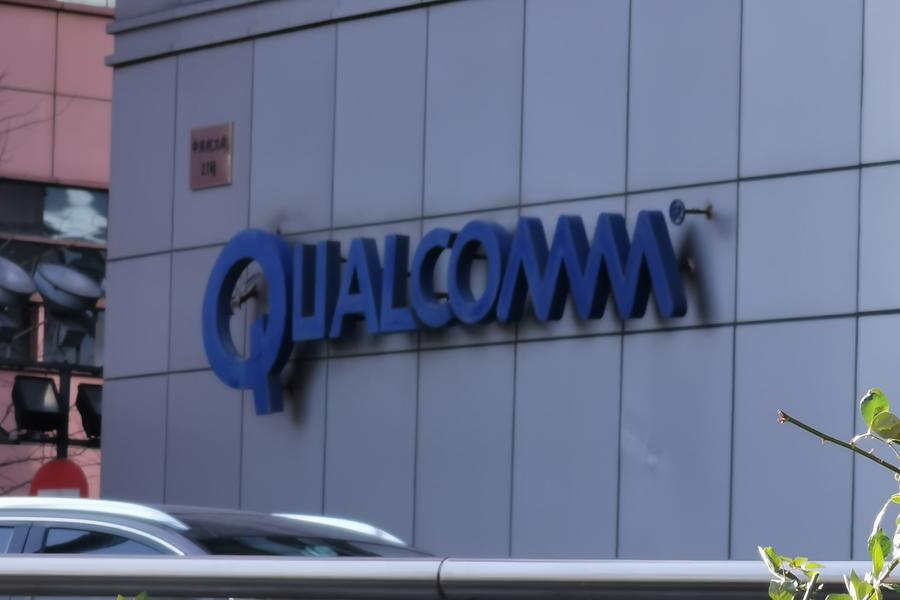 On April 28, 2021, Qualcomm released its financial results for the second quarter of the fiscal year 2021. In the report, Qualcomm states that it achieved revenue of USD 7.94 billion, up 52.1% year on year, and a net profit of USD 1.76 billion, surging 276.5% year-on-year. At the same time, during the earnings call, the company shed light on its optimistic revenue expectations (from USD 7.1 billion to USD 7.9 billion) in the next quarter. As a result, Qualcomm's stock price rose 10% to close at USD 142 on April 29.

Qualcomm has maintained rapid growth for three consecutive quarters. On the one hand, this was due to the low base of last year's performance impacted by COVID-19. On the other hand, it is also from the increasingly strong demand for smartphone chips. In terms of revenue structure, Qualcomm CDMA Technologies (QCT) revenue contributed 79.2% of the total revenue, reaching USD 6.28 billion (up 53% from USD 4.10 billion in 2019). The revenue of Qualcomm Technology Licensing (QTL) reached USD 1.61 billion, up 51% from USD 1.07 billion in the last year, accounting for 20.3% of the total.

Notably, the company still derives a significant portion (59.5%) of its revenues from Chinese original equipment manufacturers (OEMs), back to the level of 2018. In 2018, China contributed 67.1% of the company's total revenue, while the level dropped to 47.8% in 2019 due to the relative edge in the US and Irish markets. We expect this figure to continue to rise in 2021.

Since 2020, Qualcomm's development strategy has changed dramatically, as the company switched its focus to high-end chips. Once the flagship chips are outdated, they would be re-packaged as the 'high-end' and 'mid-end' in order to access a more extensive customer scale. Meanwhile, it could reduce the R&D cost and expand its market share in the segment. Snapdragon 865 in 2020 could be seen as a piece of evidence. 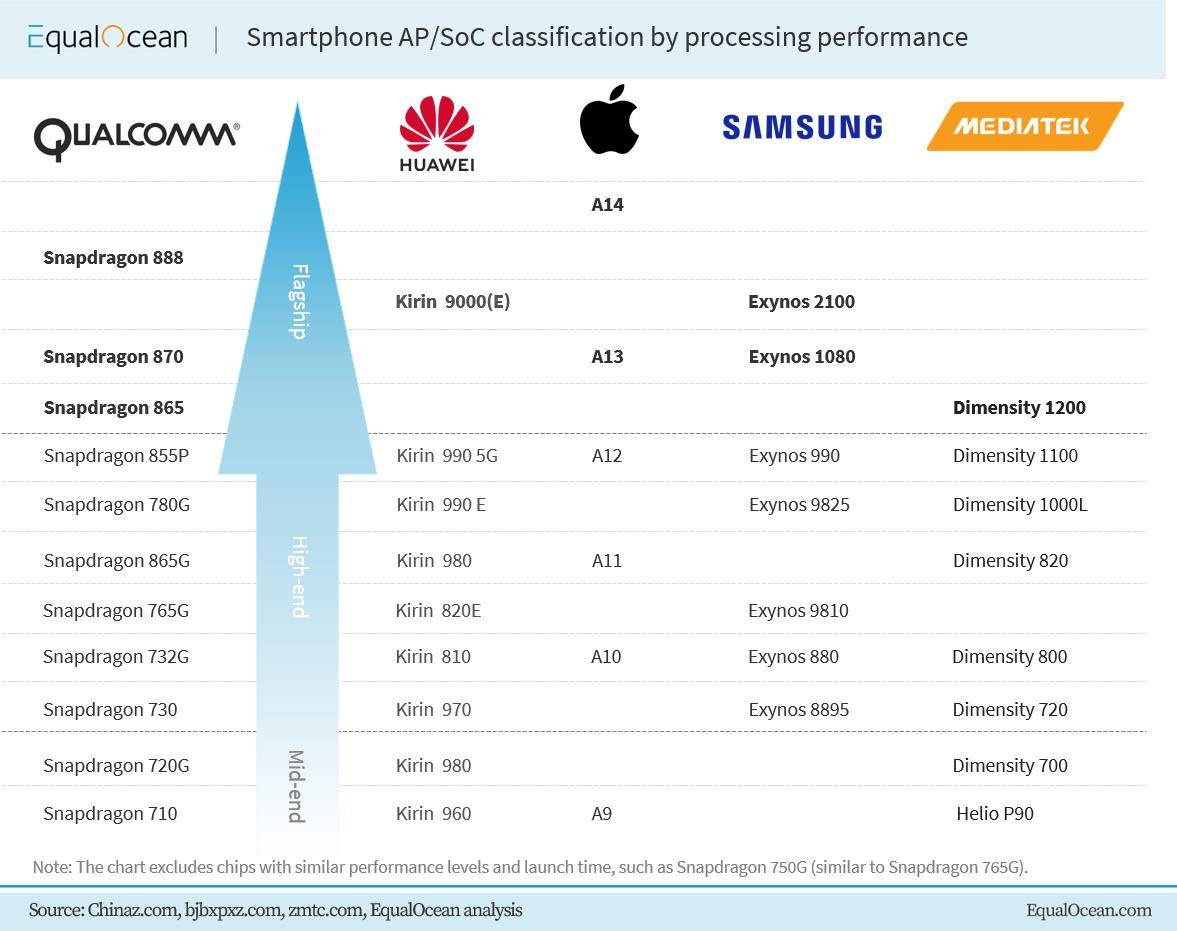 Qualcomm's latest 5G flagship chip, Snapdragon 888, integrates the third-generation 5G modem X60 and can support all major frequency bands of millimeter-wave and sub-6GHz around the world. The chip supports both the standalone (SA) and non-standalone (NSA) 5G setups, which can be well applied globally.

Snapdragon 888 is also the first 5nm, A78 architecture chip launched by Qualcomm, with a 30% performance improvement compared with Snapdragon 875, trailing only Apple's A14 in the mobile phone chip category. At the same time, according to Qualcomm, the '888' element of the chip's name in Chinese characters is used to mean 'making a fortune.' This somewhat subtle detail also shows the importance of the Chinese market to Qualcomm and, to some extent, gives a hint regarding the company's future development strategy.

Loss of top place, potential in the Chinese market

However, Qualcomm's advantages in the high-end market don't seem to be solid. Leading the space during the period from the 2G to 4G era, Qualcomm has built a stranglehold on the mobile chips market. But the company's technology update iteration has been slow in recent years, and some investors have pilloried it as a firm "squeezing toothpaste out of a tube." Its Taiwanese peer MediaTek, which is arguably better at producing low-end chips, has started moving up to the higher price bands. Resulting from MediaTek's strategic shifts, China's large handset manufacturers – such as Xiaomi – have begun turning to its chips.

According to Omdia, MediaTek's mobile phone chip shipments in 2020 reached 352 million, surging 48% year-on-year. Its market share has increased to 27%, surpassing Qualcomm as the world's largest smartphone chip supplier. In contrast, Qualcomm shipped 319 million handset chips, down 18% compared with 2019, with its global market share dropping to 25%.

MediaTek's newest generation of 5G flagship chips is reportedly going to be manufactured at the 4nm process node. At the same time, it is also researching 3nm cutting-edge products. Not only does MediaTek outperform Qualcomm in terms of shipping volume, but it also takes on its American nemesis at the most advanced nodes.

At present, MediaTek has received orders from OPPO, Vivo and Xiaomi. According to Qualcomm's 2020 financial report, in fiscal years 2020, 2019 and 2018, annual cash flows from Apple, Huawei, OPPO, Vivo, Samsung and Xiaomi accounted for over 10% of its total revenue each.

On the supply side, the global chip shortage is currently hindering the company's development. Along with the post-COVID economic recovery and the new trends, such as smart cars, a shortage has appeared in Qualcomm's upstream: processor component suppliers' inability to deliver more in a short term is having an adverse effect on the company's performance. Likewise, its key customers, such as Samsung and Xiaomi, have been affected.

The shortage might end soon though: all the major contract chip manufacturers are actively expanding their production capacity. TSMC has estimated that it will invest USD 100 billion in the next three years to expand its plants. GlobalFoundries has announced that it will invest USD 1.4 billion in 2021 to increase production at its three key factories. China's national champion SMIC plans to build a 12-inch wafer foundry in Shenzhen in 2021, with a monthly production capacity of 40,000. At the same time, SMIC's 'Capital' project (link in Chinese) will be producing 12-inch and 28nm wafers, with a production capacity of 100,000. This may become bullish news for the fabless Qualcomm.

Meanwhile, another clear trend in the market is that semiconductor wafer fabs are moving to mainland China. According to SEMI statistics, in 2000, the combined semiconductor production capacity of the United States and Japan accounted for two-thirds of the global figure, while the capacity of China's mainland only took 2%. In 2019, driven by the new policies and investments, it grew to 17% and is now expected to surpass Taiwan as the world's largest chip manufacturing market as soon as 2021. This macro trend creates new opportunities for Qualcomm in the Chinese market.

Yet, Qualcomm may not perform in the third quarter as well as it has projected. This is mainly because the company relies on limited suppliers for some products, particularly those in the QCT segment, and is subject to possible shortages of raw materials or manufacturing capacity.

Qualcomm's selected financial ratios (EV/EBITDA, P/E, P/B) have been hovering at low levels in the recent one-year period. For example, Qualcomm's P/E in the past twelve months has been lower than both the stock market average and industry average, which may become a growth point in the short term, given the firm's business performance.

The long-term growth point for Qualcomm will be the launch of the next Qualcomm flagship chip, the Snapdragon 888 Pro, in Q3 2021. Earlier, Snapdragon 888 was widely criticized by chip enthusiasts for its lower-than-expected power consumption ratio. If Snapdragon 888 Pro can improve this defect, Qualcomm may continue to maintain its position in the high-end market. In addition, Qualcomm has started using its 7-series and 6-series chips for its 5G products. Terminal devices equipped with the Snapdragon 4 series 5G mobile platform will also be available in the first half of 2021. These products might drive the company's valuation this year.

Although there are several significant growth points, considering Qualcomm's market share and risks coming from the upstream, the company's outlook is somewhat mixed. In 2021, investors should pay close attention to changes in the company's chip production capacity and the launch of the new Snapdragon 888 Pro.