Even though 360 DigiTech's share price has recently been growing, it still seems undervalued. 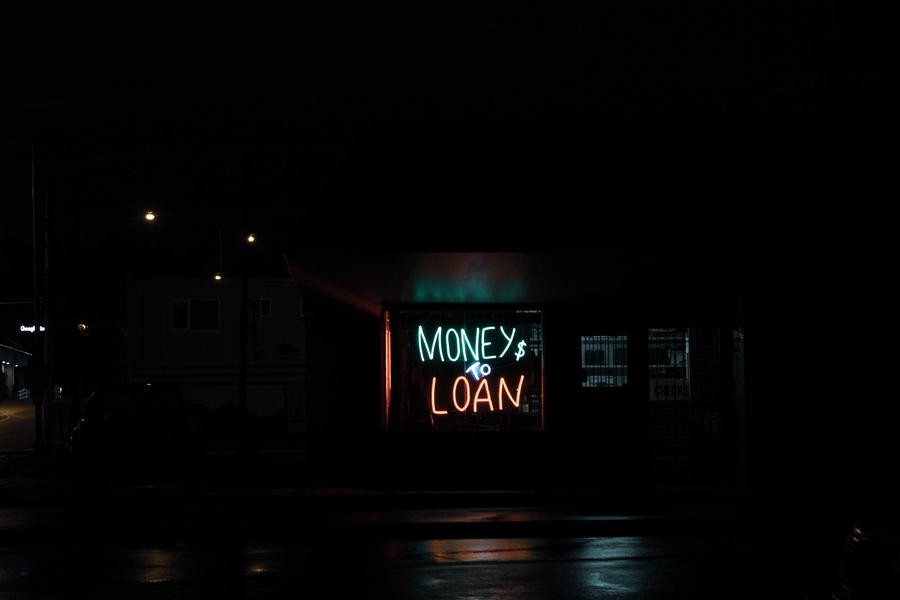 ● The company has demonstrated unique technological capabilities and is poised for further development.

● It will benefit from the antitrust regulations that provide extensive market opportunities for niche fintech champions.

● It is expected to keep expanding its business scale, while also improving asset quality.

At the very end of 2020, the US IPO of lending platform Upstart (UPST:NASDAQ) grabbed all the spare market attention as its share price doubled on the first trading day. It has surged 7 times to USD 166.8, as of May 27, 2021, from its issue price of USD 20. It spurred investors' interest in the fintech industry, with many concept stocks jumping up. Following this trend, the price of 360 DigiTech (QFIN:NASDAQ), a leading Chinese fintech platform, ran up by 128.5% from USD 12.97 at the very beginning of 2021, to the closing price of USD 28.73 on May 26 of the same year.

However, some of China's fintech companies are still not fairly evaluated, with their P/E ratios significantly lower than those of their US counterparts. Taking an example, Upstart, which is recognized as the future of US financial shares, has a P/E ratio near 900x, which represents an obviously overpriced position. Very similar to Upstart, 360 DigiTech also runs a technology-based loan facilitation business. And it is extremely undervalued, with a P/E ratio of 8x. Beyond the stock performance, 360 DigiTech will continue its robust business growth, benefiting from its solid fundamentals. Transiting from a loan issuer, 360 DigiTech is now a to-B service provider with advanced technology capabilities. Here, we list some of its main growth catalysts.

In recent years, the state in China has increased its supervision of fintech, especially the online lending market, with multiple new strict regulations launched. Fortunately for 360 DigiTech, it does not seem to be a primary target of the regulators as it only provides loan facilitation services with less than 1% of the capital involved.

For example, in late December 2020, the Supreme Court's ruling essentially exempted institution lending from the 4x private lending rate cap, which lifted a major obstacle in the industry and limited the profitability of online credit platforms that directly participate in the issuance process. Ant Group and JD Digits are two companies impacted by this regulation. Also, the state urges small loan providers to increase their capital proportion to at least 30%, marking a much lower lending scale for these platforms. The clients unqualified for this criteria will no longer be able to receive services from these online lending platforms and will shift to seek possibilities from smaller companies or third-party loan facilitators, like 360 DigiTech.

In the future, the large market space released by Ant and Tencent's WeChat is likely to benefit the company.

During 2020, most loan providers suffered high loss rates. However, 360 DigiTech, controlled the risks well under the downturn with no deteriorating asset qualities but improvements.

The D1 delinquency rate, which refers to the outstanding principal balance of loans past their due date, decreased from 7.9% in February to 5.0% at the end of 2020; and M1 collection rate, refers to the percentage of the overdue principal amount that was paid in one month among all the overdue principals as of such date, increased from 81.8% in February to 90.2% in December of 2020. Both ratios represent the best levels in their sub-industry. 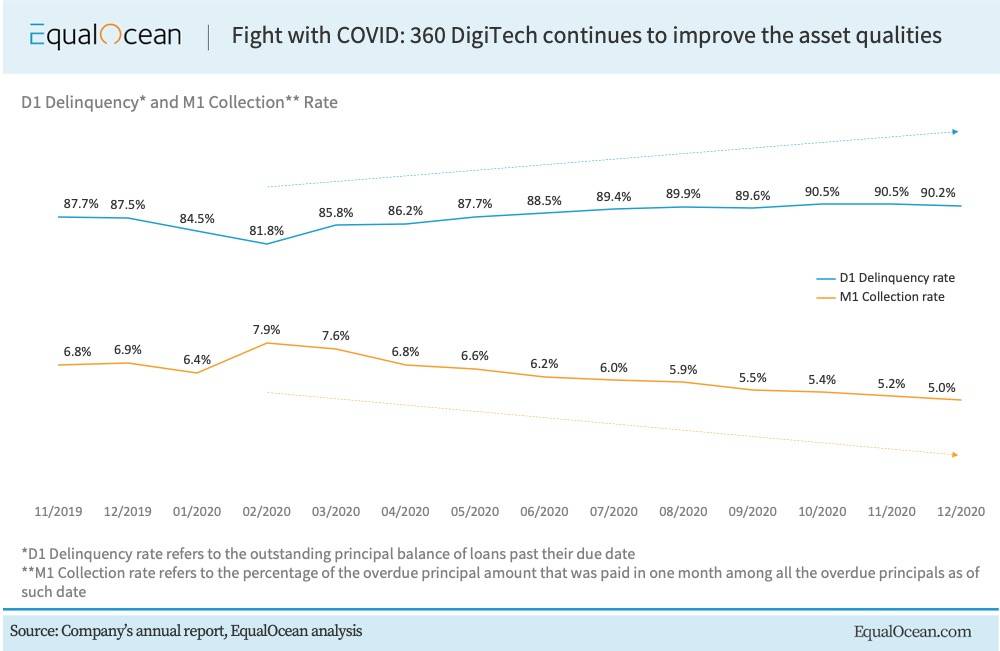 Most fintech companies generate large profits from financial services, like loan facilitation, client-matching and traffic generating, instead of low-margin tech-powered services. 360 DigiTech, unlike many of its peers, is a real SaaS platform that generates considerable revenue from technology services. In the third quarter of 2020, the company brought its net tech income to over 50%, accounting for 49% of entire income for 2020.

Embedded finance is a to-B business that is featured by 360 DigiTech's strategy. It stands for tech-powered services, especially those in the risk management area. It is embedded in other Internet businesses, like Du Xiaoman Financial, Didi Chuxing, Meituan, Xiaomi Finance, JD Digits, reaching tens of millions of potential users in a variety of consumption scenarios, such as online shopping, transportation and food delivery.

360 DigiTech's to-B clients are even expanded to many peers in the fintech industry, which means it is reaching the ecosystem construction stage with core competitiveness.

We believe it is the technological advancement that supports the company to maintain its high and steady growth. 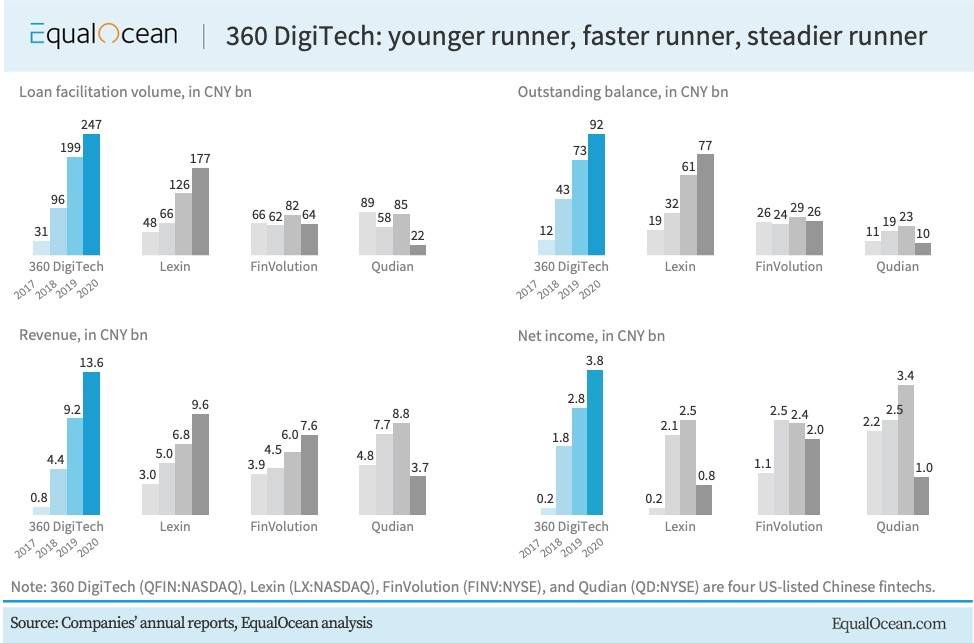 Although the stock has been increasing a lot during the recent months, we still consider that 360 DigiTech is currently undervalued with the potential to rocket its growth in the future. 360 DigiTech will be among fintechs competing for the market space released by the giants in the field, such as Ant Group and Tencent. 360 DigiTech's technology-powered business model is somewhat similar to Upstart. Benefiting from this model, the company will attract more attention and its stock price is expected to increase further. 360 DigiTech's prospects look optimistic.