Here's why IFBD is worth investors' attention. 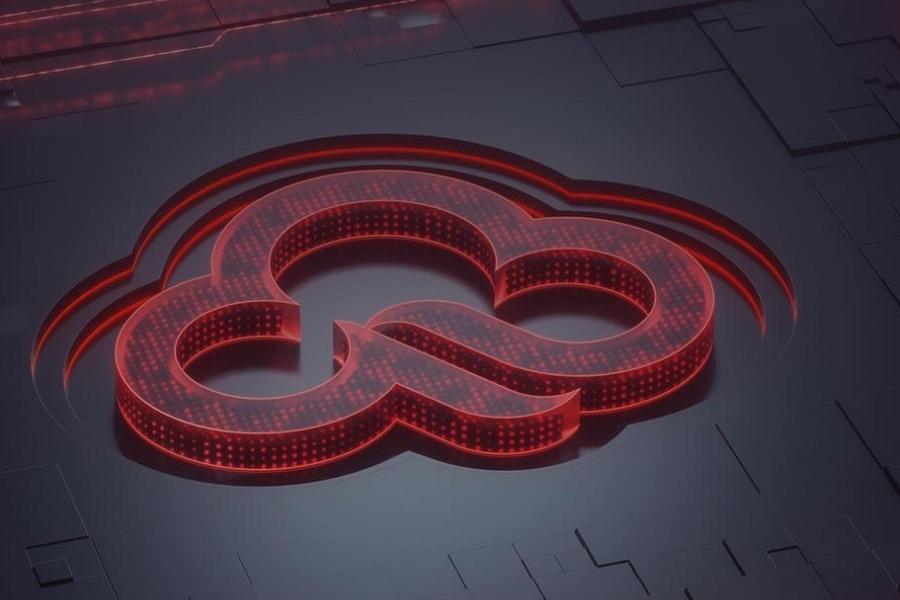 On April 20, 2021, Beijing Infobird, a popular Chinese supplier of cloud computing services, was listed on NASDAQ with the ticker of BIRD (was later changed to IFBD), and issued 6.25 million shares, with a price of USD 4 per one. The company raised USD 21.8 million in the public offering. According to the company, about half of the fund will strengthen sales and marketing, while 24% will be used to further research and product development. The company's shares rose more than 50 percent on the first day, but then fell back and have been lower than the public offering price recently. This article will analyze whether the company is now a good investment option. 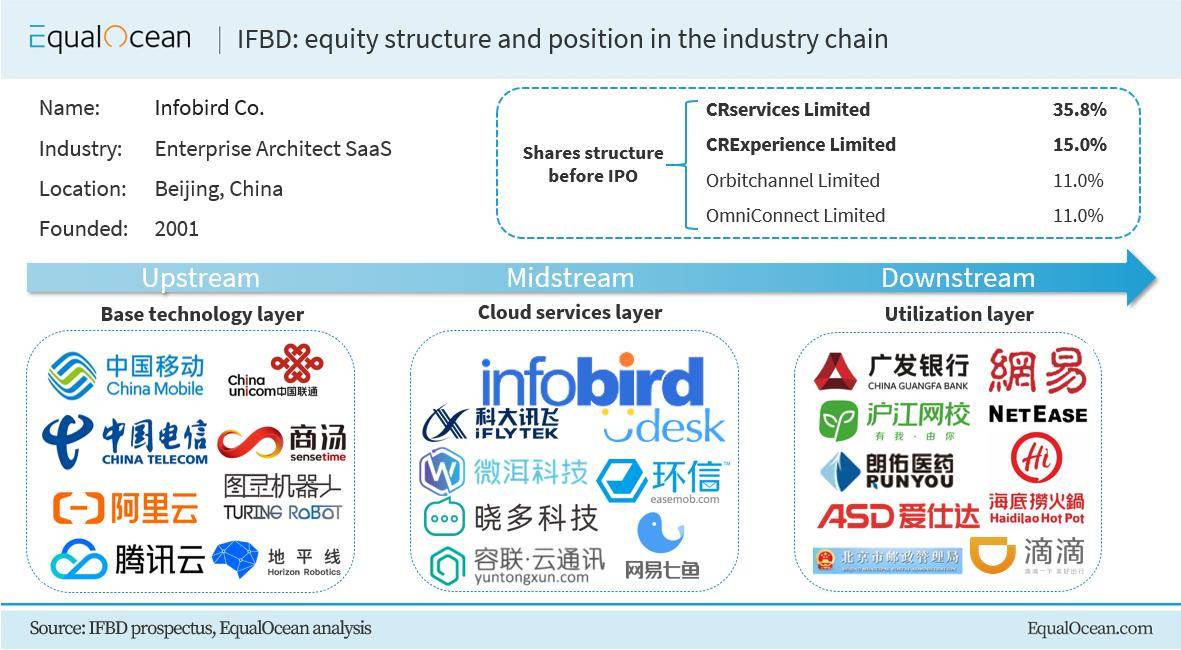 Founded in 2001, Infobird initially joined the call center industry as a middleware manufacturer. After decades of technical accumulation, it has become a SaaS solution provider, providing AI-driven or support call center services. According to the company, the application of AI is the key trend in technology – that's how the company plans to promote the upgrading of its services.

Infobird is located in the middle of the cloud communications industrial chain. While it focuses on providing services for customers in the financial industry, it has also expanded its business to education, public services, healthcare, and consumer sectors. By 2020, the company had attracted over 8,400 average monthly paid user accounts and served 421 customers in the finance, education, public services, healthcare and consumer staples areas, which represents an increase of 17.6% from mid-2020.

Except for the USD 3 million Angel round invested by Guiyang Venture Capital, we have not found any other financing records for Infobird. According to the information disclosed in the prospectus, the top three institutional shareholders of the company are CRservices Limited, CRExperience Limited and Orbitangel Limited, which hold about 60% of the company. All of the three entities were incorporated in the Republic of Seychelles by Infobird board members. We think the registration location was mainly due to the strict US registration requirement and tax purposes. Yimin Wu, the CEO at Infobird, and his brother, Shengmin Wu, held 49.28% shares of the company before the IPO (the shares went down to 28.75% after that).

In 2020, Infobird's total revenue reached USD 14.5 million, down 20% year-over-year, which was mainly due to the negative impact of COVID-19. In addition, its main customers have changed their internal telemarketing strategies, resulting in a decline in the use of the company's SaaS services.

Meanwhile, the cost of revenues increased by standard, and customized cloud-based services decreased significantly by approximately USD 3.2 million, down 63% year over year. It resulted in a gross profit drop of only 4%. With the company's continuous research of standardized SaaS products with AI capability, the company's R&D cost in 2020 increased by 27% compared with that in 2019. Notably, the cost of software development increased by approximately USD 0.5 million, up 1,727% year over year. As a result, its net profit decreased by 20% in 2020. However, the company's net profit margin remained at a stable level (28%).

From the perspective of segments, software development and customized cloud-based services accounted for 37.1% and 34.4%, respectively, of the total revenues in 2020. Notably, the shares of customized cloud-based services fell from 70.5% to 34.4% due to the loss of the largest customized client. Meanwhile, the software development segment's contribution increases significantly (19 times compared with 2019). The company's revenue shares from standard cloud-based services decreased from 11% to 9.7%, while BPO services increased slightly from 11% to 12% of the total revenue in 2020. The structure has experienced a significant change, which indicates a transformation in their strategy. We will talk about it later.

The most important opportunity for the company is that it joined a fast-growing industry. According to the data from Asia Briefing, the SaaS industry market is a fast-growing one in China, surging from USD 33 billion in 2019 to USD 47 billion in 2020, and is expected to grow to USD 69 billion in 2022. The report also states that the industry is facing trends at the intersection of SaaS, AI and big data technologies, which enable it to gradually penetrate markets in other industries, including the finance, healthcare, education, transportation, public services and retail sectors.

Secondly, the smart money is in the SaaS sector in the US market, owing to its stable growth characteristics. From users' perspective, high-quality SaaS companies usually have strong user stickiness (especially customized services or software) and are easy to cultivate users' habits. At the same time, the SaaS ecosystem can deposit a large number of users' data, forming a virtuous circle. SaaS companies listed in the United States, such as Salesforce, Workday, ServiceNow and Twilio, have all surged in a year after the IPO.

A significant threat now is that the largest customers will no longer procure SaaS services from Infobird. The company generates a significant portion of its revenues from a single major customer. China Guangfa Bank, in the years before 2020, accounted for 77.3% of the company's total revenue in 2019. 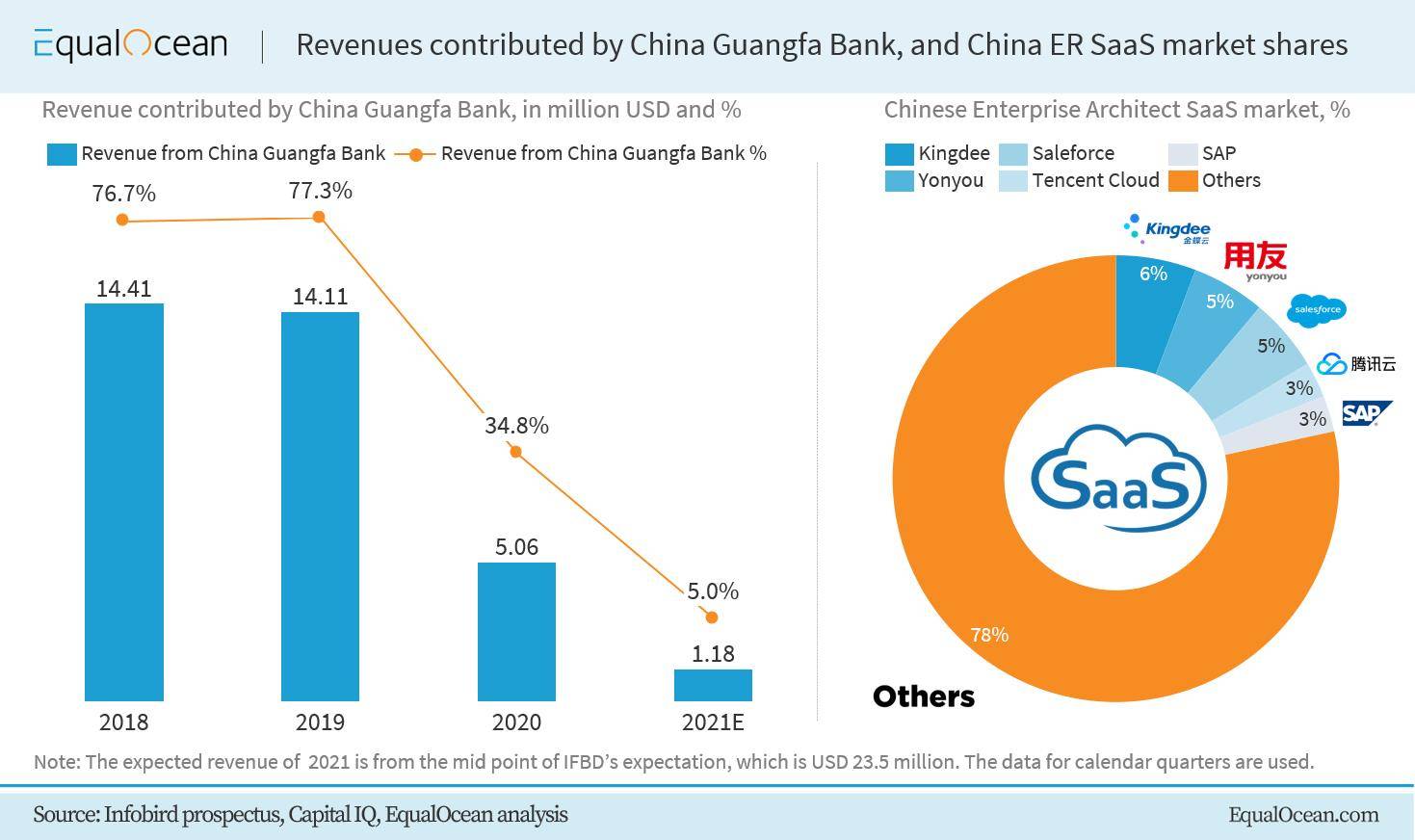 According to the projection by Infobird, China Guangfa Bank will account for approximately 5% of the company's total revenues for the full 2021 fiscal year. Losing the largest and only one client for its customized business had a very negative impact on Infobird's performance, to which its financial data testifies. The company is now forming a strategy for attracting clients to their license services, especially for the clients who are concerned about the safety of cloud-based services and the potential higher price of the subscription in total compared with one-time on-premise fees. The strategy allows the customers first to start utilizing its products in their daily operation and then aim to transfer them to subscribers with standard cloud-based services. The company expects its revenue to reach USD 22 million to USD 25 million in 2021, which will mainly be a consequence of diversifying its customers to make its revenue structure more robust.

From the perspective of the whole industry, fierce competition is also a significant threat. Within the CRM market, the top 5 players only accounted for 21.6% in 2020, indicating that the market has small differentiation and fierce competition characteristics. Due to the homogenization of standardized services in the industry, Infobird faces a vital challenge to stand out in the sector.

2020 seems to be a critical turning point for Infobird. According to the company, it took the initiative to shift its business focus from customized cloud services to standardized cloud services. The company is actively seeking change, as shown in the changes in its revenue structure and client base.

The company's monthly average number of paid accounts in Cloud services increased by about 30.5% in 2020 compared to 2019. It has been strengthening sales and marketing in the financial industry to obtain new high-quality customers and expand to several other sectors, such as retail and healthcare. Moreover, a large part of the company's IPO Financing will be used to strengthen sales and marketing. However, we can't be sure whether this move is active or passive, which is related to our analysis of the company's risks. A passive change may indicate a lower success possibility.

Besides, its cash flow is also under pressure. As of December 31, 2020, the company's working capital deficit was approximately USD 0.2 million and cash amounted to USD 1.7 million. The company's management believes that it will require a minimum of USD 4 million over the next two months to operate at its current level, either from revenues or financing. This decision puts pressure on the company's operation. Further, with the severe homogenization of standardized services in the industry, whether or not the company's transformation is effective remains to be seen. This is also a reason why we are not optimistic about the company at present.