Investment-tech emerged as a solution to satisfy the growing needs of China's consumers. During the past decade, the disposable income per capita for urban households more than doubled and the individual deposit balance achieved a 185% growth. Besides, Chinese consumers are steadily growing their investable wealth and seeking more diverse investment options, which have laid a foundation for China's wealth management market to expand. Per China Banking and Insurance Regulatory Commission's projection, the total volume of investable assets in the country will surpass CNY 200 trillion by 2022. 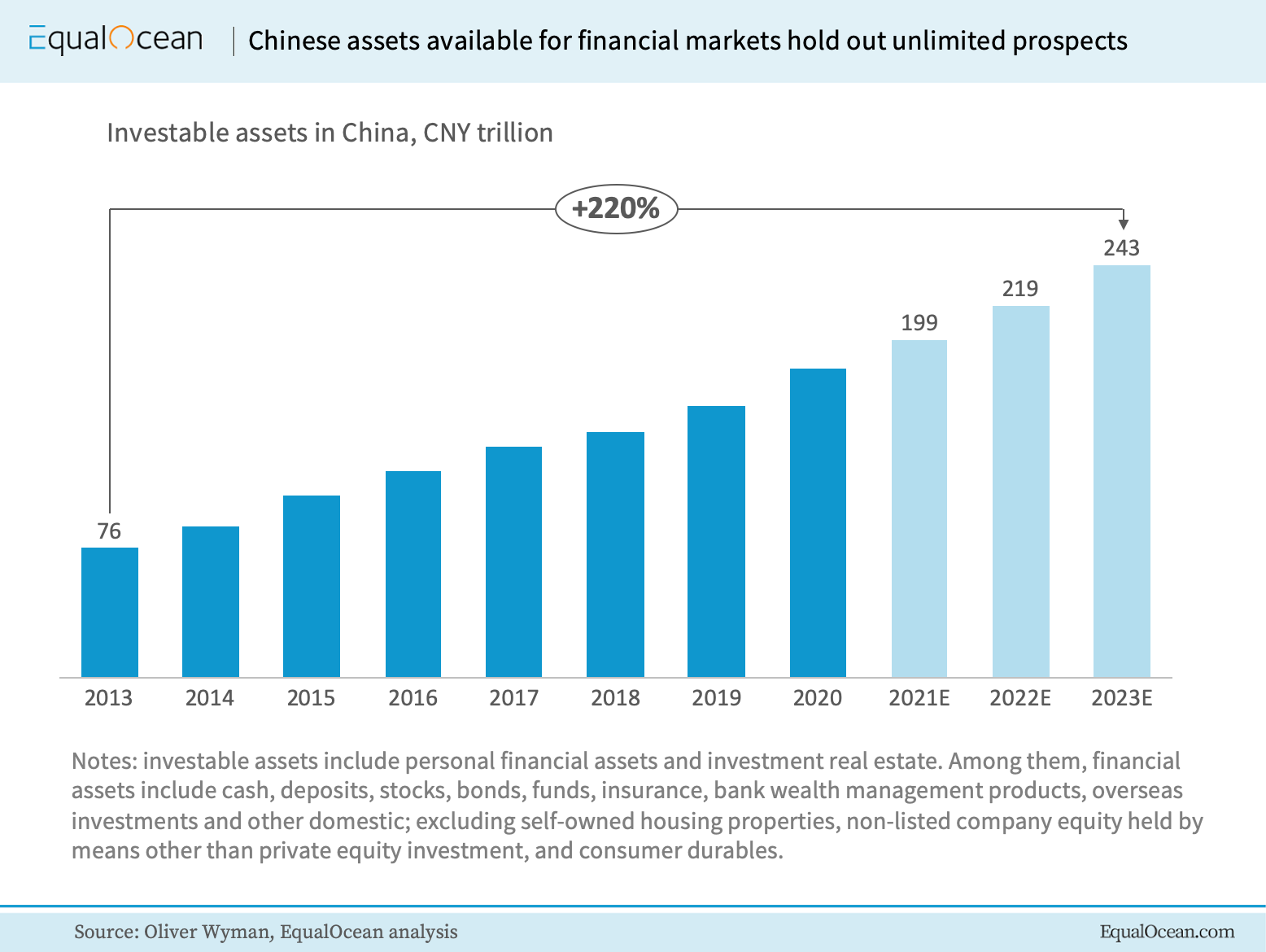 The AUM from the third-party partner financial institutions and Ant's licensed financial services subsidiaries achieved a new high of CNY 4.1 trillion in the first half of 2020, while the year-on-year growth rate (20.63%) was only 500 bp lower than that of the previous year.

Among over 6,000 products provided by Ant, Yu'ebao is undoubtedly the most popular. A key function of super app Alipay, Yu'ebao is a digital wallet featuring flexible payment and easy savings that allow consumers to accumulate personal wealth. This investment-tech platform redefines the standard for digital investment services, following the motto of "simple, convenient, accessible, transparent, anytime, anywhere, anyone." As of the first quarter of 2021, Yu'ebao was the largest money market fund in China by AUM with a scale of CNY 972 billion, according to Fitch Rating.

By looking into the platform's performance, we have explored three main catalysts that contributed to its success.

1. Chinese consumers have a growing tendency to accumulate personal savings. Historically, Chinese households invested most of their savings in bank deposits and property, when many families had limited allocation of wealth outside these two asset classes. In other words, it was the preference for low-risk and low-return assets that stirred up the emergence of Yu'ebao – a product allowing consumers to generate yield on their Alipay account balance in a simple way. 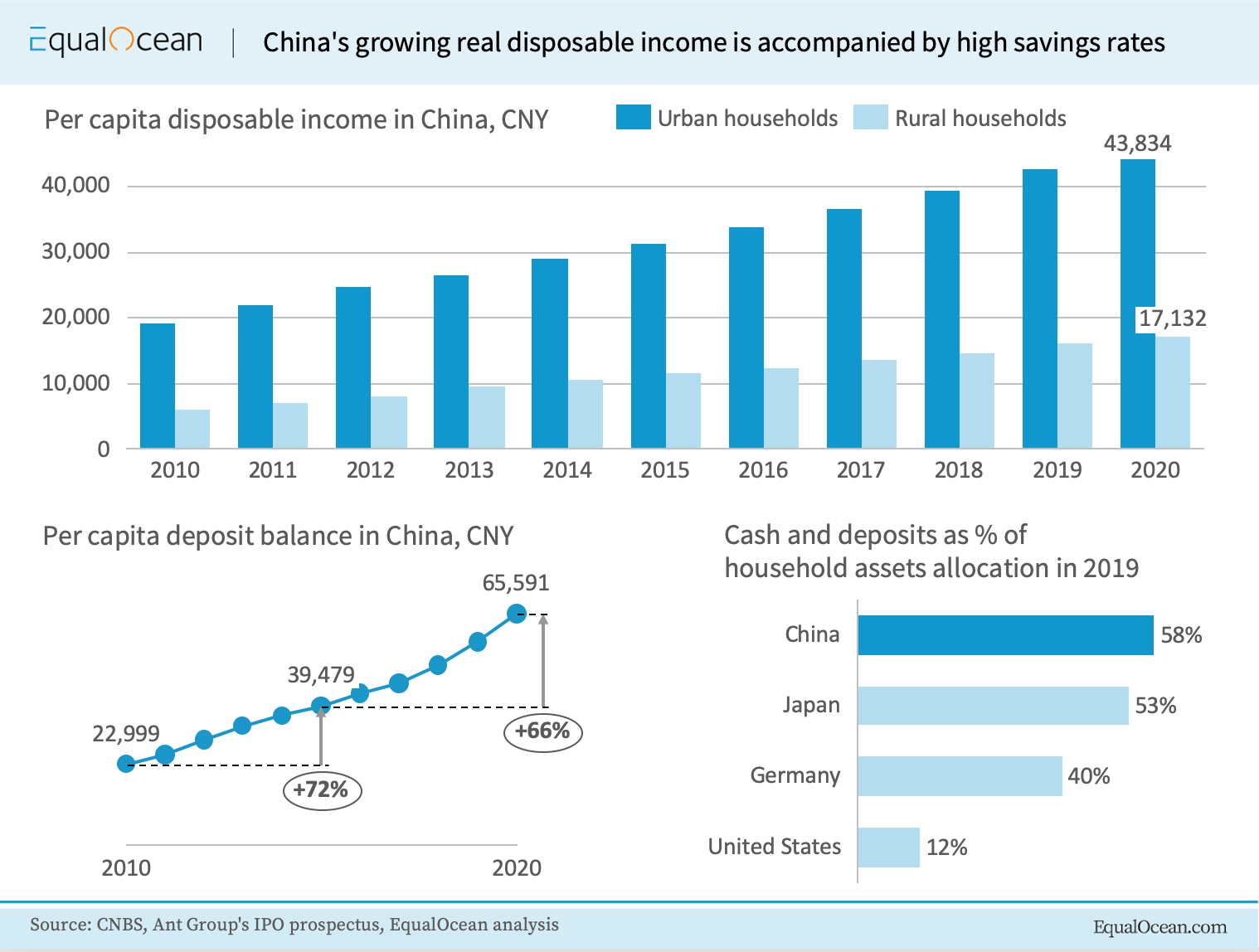 2. Yu'ebao has a low threshold and relatively short-term investment products, compared to those of traditional wealth management companies. The instant redemption feature enables consumers to pay or redeem funds without any delay. This feature makes Yu'ebao more appealing to consumers. In addition, different from traditional wealth management institutions targeting only high-net-value individuals (HNWIs), Yu'ebao provides 'affordable' wealth management products for mid- and low-income users by focusing on product cost-effectiveness and user inclusion. For example, its minimum investment volume per account is CNY 1.

3. Ant Group secures a whale of traffic for Yu'ebao. Backed by Alibaba (BABA:NASDAQ), with its subsidiaries and affiliates, Ant Group has accumulated a massive consumer base for Alipay in different consumption scenarios, such as shopping on Taobao and Tmall. According to the prospectus, Alipay's annual active users (AAU) reached over 1 billion for the twelve months ending August 17, 2020. The monthly active users (MAU) figure was 711 million in June 2020. At the same time, the annual active digital finance users hit 729 million. 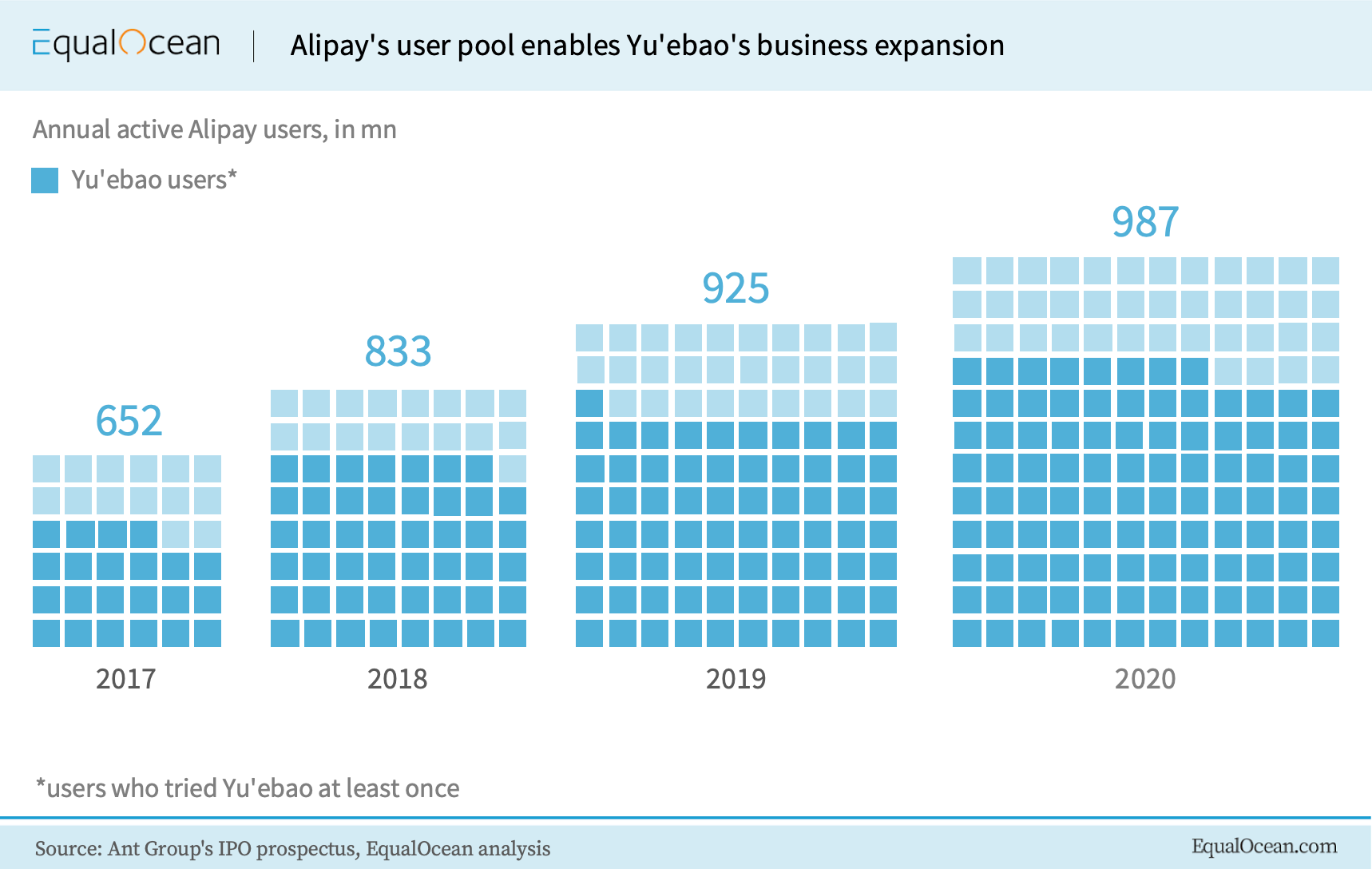 Ant Group's investment-tech revenue comes mainly from technical service fees from financial institutions based on the scale of facilitated assets. It can be summarized into two segments – self-operated wealth management products (including Yu'ebao and Tianhong Fund) and service fees from fund agency businesses via MYbank and Ant Technology.

Ant Group's self-operated products were originally the main revenue stream, but the third-party offerings have gradually optimized the distribution, improving more abundant agency products. In the first half of 2020, the income generated by Tianhong Fund's asset management business accounted for 19% of the total income of the wealth management technology platform. This proportion is still relatively high, but compared with previous years, it has declined significantly. 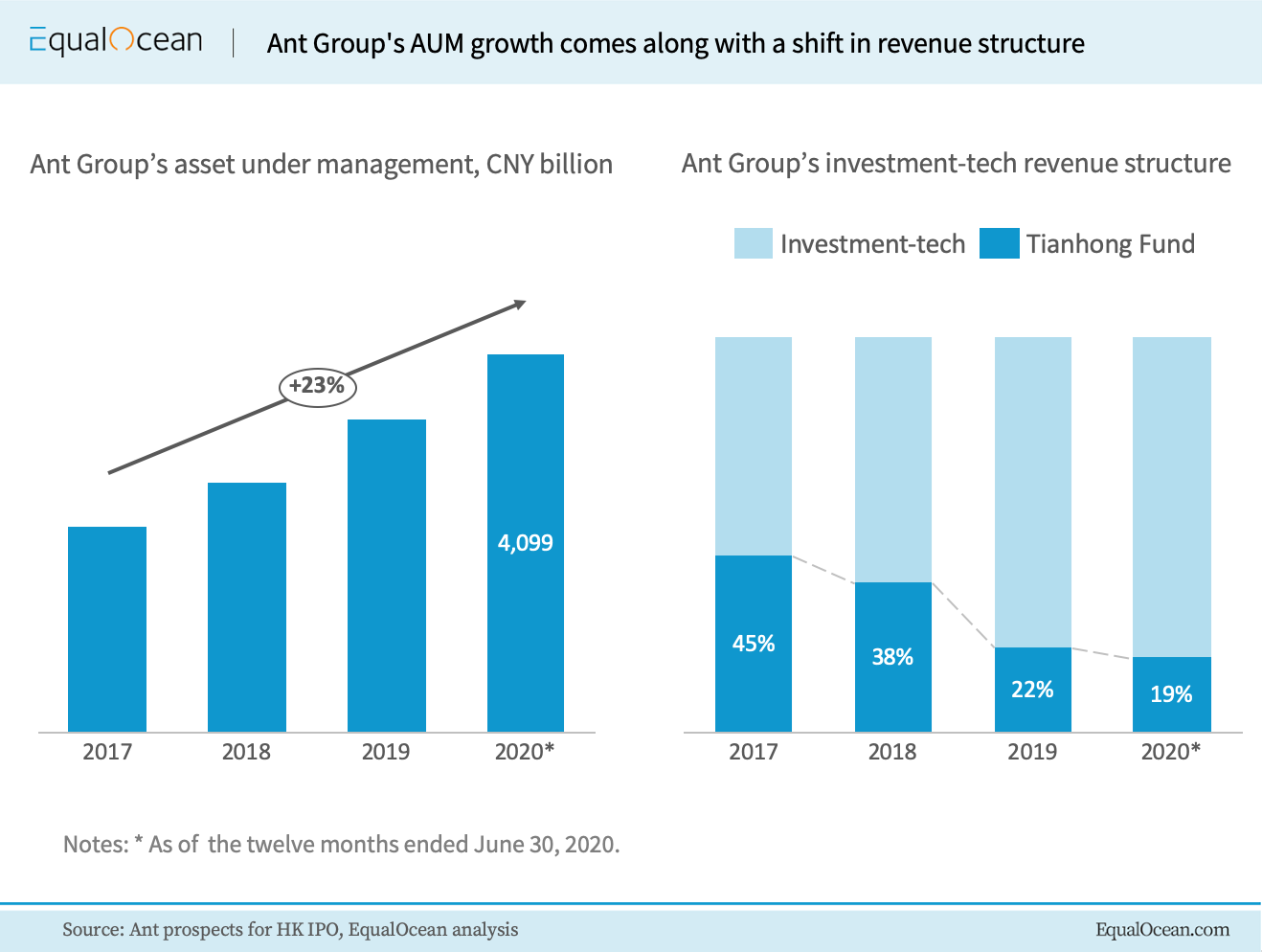 Tencent's wealth management platform Licaitong is regarded as the strongest of Ant Group's competitors in the space, especially given the conversion potential for its huge user base. 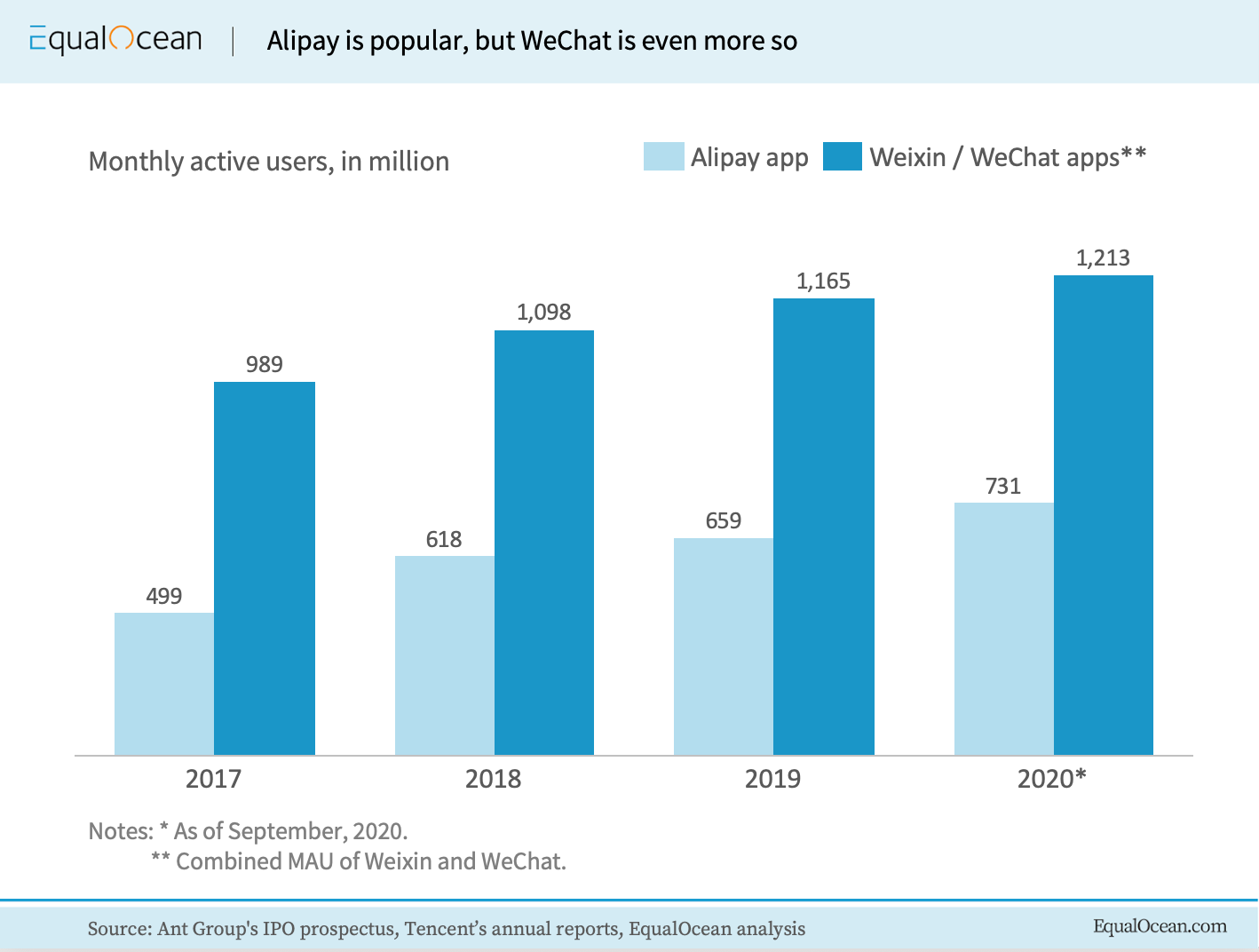 Relying on WeChat, Licaitong entered into the financial market as a social platform. Therefore, the company initially failed to acquire public trust in financial expertise. Since then, Licaitong has nevertheless overturned its disadvantages through improving the service quality.

Besides, Licaitong has established a membership system to classify users and provide different value-added services with the aim to increase user stickiness. At present, there are 1,093 Licaitong agency funds, which is five times lower than that of Ant Group. From the non-money market public funds side, including equity funds, hybrid funds and bond funds, the scale just exceeded CNY 100 billion as of March 31, 2021, while the holdings of equity funds are only CNY 63.3 billion. There is still a lot of room for Tencent's Licaitong to join the group of first-tier asset management service providers (typically considered those with over CNY 300 billion under management). The birth of Yu'ebao was a product of the times, with its success due to its own edge. How to further exploit the competitiveness and expand its reach is the next key step for Ant Group's management to consider; while the regulatory landscape keeps changing, the investment-tech platform remains the largest player in the field, with tremendous ecosystem backing.

CONTACT US
Scan QR code to contact us for professional consulting services
Next article
Will China's Educational IT Become the Next Capital Favorite after K-12?