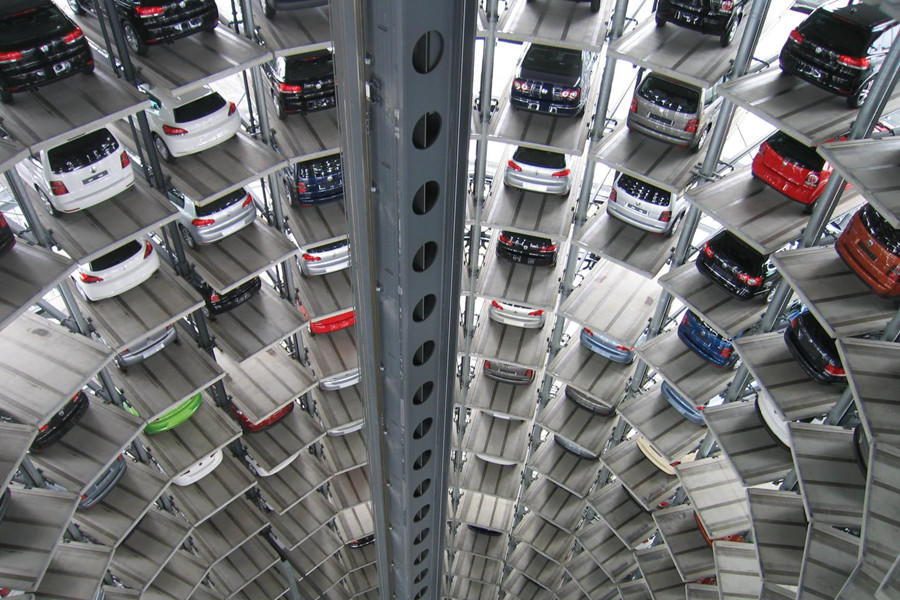 ●      The country's auto market is reviving and is set to be in a growth trajectory for quite some time.

●      The company has expanded its upstream business, entering the flourishing NEV market.

●      Though the local NEV leaders are prone to sell cars directly, dealers will keep playing an important role in the Chinese market, especially in the lower-tier cities.

The relieved travel restrictions have revived trading activity in China's passenger vehicle market, the world's largest in terms of both demand and supply. Cango (CANG:NYSE), a company aimed at disrupting the auto value chain in China, has presented solid Q2 2021 results. This article will introduce Cango, its strategy and future development outlook.

In 2010, Cango was founded by a group of veterans in China's auto financing industry with the idea of making auto transactions "simpler, easier and more pleasant." There was a certain degree of demand for such a platform in China's vast but underserved lower-tier cities' markets. Started with auto loan services, the company's scope later stretched to the vehicle sales business upstream and after-market services downstream. By the end of 2020, Cango had built a network consisting of 47,740 auto dealers, accumulatively serving more than 1.9 million car buyers. The company currently covers more than 1/3 of China's total new car dealers, and over 75% of dealers in Cango's network are located in tier 3-5 cities.

Over the past ten years, the company has established a technology-driven platform that connects various participants along the auto value chain, including dozens of large and mid-sized commercial banks, insurance firms, as well as major gasoline vehicle OEMs and high-tech new energy vehicle (NEV) OEMs.

China's auto market is back on a growth trajectory

Cango's business is rooted in the flourishing auto trading activities in China. Although the pandemic has hammered buying cars in brick-and-mortar stores, the total transactions have shown resilience. According to CPCA, the Chinese light vehicle sales hit 19 million in 2020, down 6.8% year-on-year. However, the outlook for future sales is rather encouraging: CAAM expects the market to grow by 10% in 2021. Moreover, the organization forecasts that the 2025 sales will reach 30 million, with a CAGR of 4.6% from 2021 to 2025. 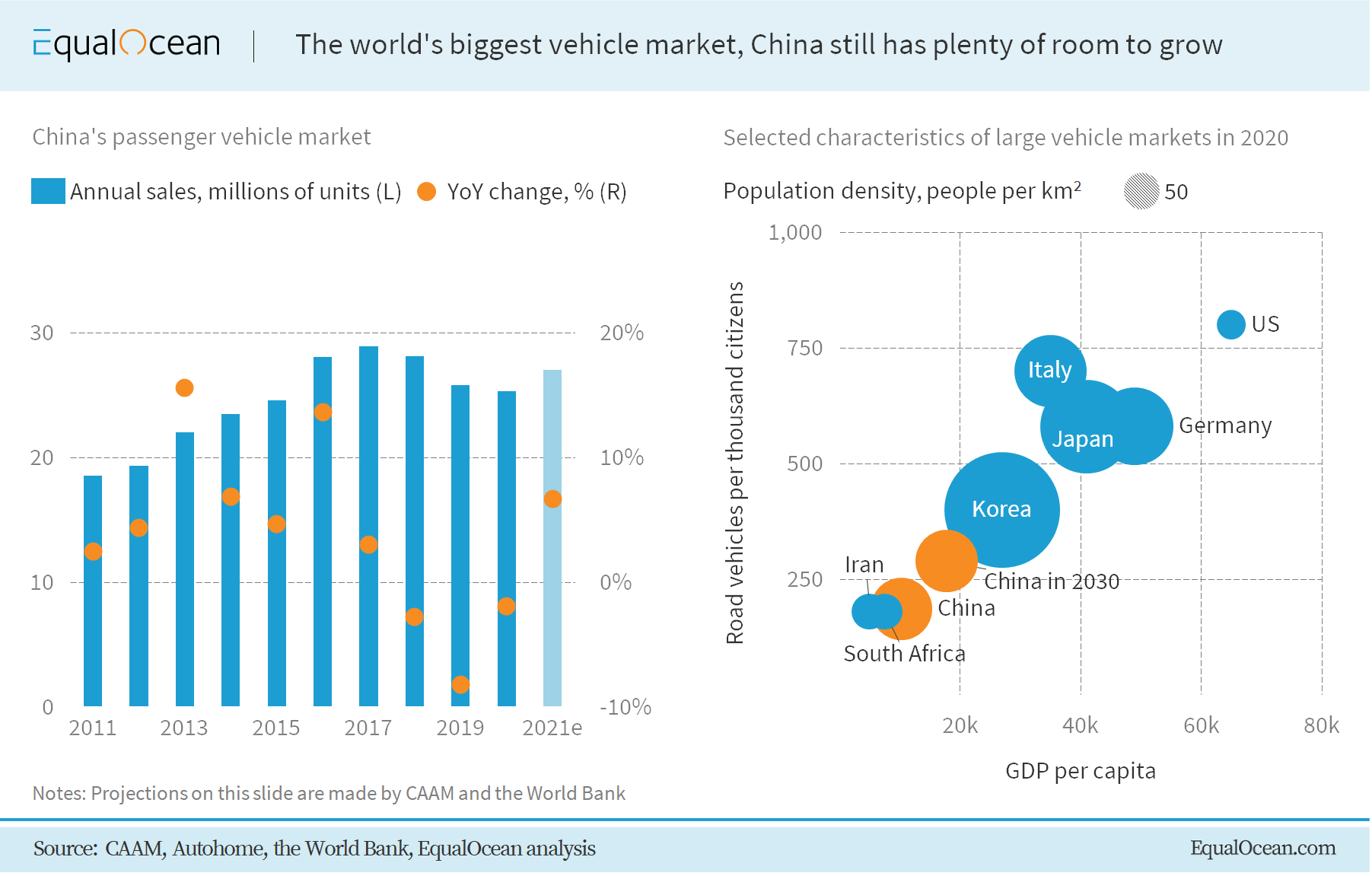 The driving force of surging future sales will be the rise of per capita ownership of cars. Based on the World Bank's data, China's car ownership was 283 units per thousand inhabitants in 2019. At the same time, China's population density was 149 people per kilometer squared, GDP per capita was USD 10,276. By comparison, Japan and South Korea are more densely populated, have higher GDP and car ownership rates per capita. Thus, China's auto market sees great potential.

Lower-tier cities are showing strong momentum in the rise of the car ownership rate. There are several catalysts. One is the policy of 'sending cars to the countryside' (汽车下乡), under which people who live in rural places receive subsidies when buying cars. Electric vehicles have been added into the list in recent years. Second, lower-tier cities in China often have no restrictions on getting vehicle plates, further stimulating car sales. Third, citizens in lower-tier cities have less debt burden on housing so that they can potentially spend more money buying cars.

Following the big trend, Cango also stepped up its efforts in the NEV market. NEV manufacturers, which usually adopt the direct operation and sales model, are actively seeking traffic in the lower-tier markets and professional traffic operation support. Cango's strong foothold in the lower-tier markets and service capabilities in auto transaction puts it in an ideal position to meet its needs. Although some in the industry argue that NEVs' direct sales won't need dealers and related service providers like Cango, we believe, however, that dealers will continue to play an important role in the new segment's development.

Inspired by Tesla, China's NEV market was initially driven mainly by direct sales. This model was soon adopted by other EV players, including NIO, Xpeng and Li Auto. Intuitively, direct sales skip dealers so that ensures better customer services and more profit to OEMs however incurs large front costs of opening new stores. Currently, all the public EV companies' valuations are very sensitive to the vehicle delivery numbers. The relationship between electric car brands and dealers is dialectical. In 2018 and 2019, some brands like NIO and Xpeng needed funds to open new stores. After raising enough funds through IPOs, NIO and Xpeng both decided to lower the number of franchised stores. So far, EV brands have accumulated a lot of orders, but short-term deliveries are restricted to their production capacity. As production ramps up, same-store sales will touch the ceiling, especially in the lower-tier cities. By that time, these brands are likely to reconstruct the dealer network. Besides, not all NEV brands have enough capital to open and run offline stores independently. This makes incorporations with dealers almost inevitable.

Meanwhile, NEV brands try to minimize their sales and marketing costs through an offline-to-online mode, which considers experiencing a vehicle offline, then buying it on a digital platform. High efficiency will be difficult to achieve with such a method. First of all, for most families, especially those living in lower-tier cities, a car purchase is an important event requiring both time and capital. If there is no physical store nearby, the customer experience will be downgraded. Second, brand variety is essential in the auto sector. OEMs' products face millions of requirements from picky buyers, and a few car brands are unlikely to satisfy all requirements.

Besides, as the US and Japan's history has shown, dealers aren't likely to be pushed out of the market. The United States' long automotive history has proven how important dealerships are in a large and populous country. China shares similar attributes. According to iiMedia, there are currently 287 million cars in China, with 72 cities having more than one million cars, 33 cities having more than two million cars. What's more, car buyers across the country have different consumption behavior patterns. For example, lower-tier cities' dwellers prefer domestic brands' full-size vehicles. In the Eastern regions, buyers have a higher acceptance of electric cars than their inland peers. In short, for NEV players, it's hard to adopt a standard promotion strategy in such a diverse market. Distributors and adjacent service providers like Cango can coordinate resources, making the process more resilient.

Apart from stepping into NEV business. Cango is striving to expand the business upstream including B2B and B2C. By the end of Q2 2021, the company has CNY 1.5 billion cash on hand, enough to support this new asset-light business. For example, owing to its relationship with registered dealers, Cango can provide demand-side insights from dealers to OEMs and vice versa. Cango helps dealers get vehicles they want. For B2C, Cango helps prospective car buyers find suitable cars in its dealer network. All of these are processed through their massive network on a tech-enabled platform. In its Q2 2021 earnings results, the company reported over 50% of total revenues generated from its auto trading business segment. This figure looks significant, considering that Cango's expansion into the sector started in H1 2020. Though this part of the business currently posted a lower gross margin (being positive, meanwhile), we believe it is necessary, even critical, for Cango to expand to upstream segments. By doing so, it will synergize the auto financing business and reduce single business risk. More importantly, with integration of car sources, financing, insurance and other after-market services, the company gets to strengthen the bond with its dealership network. We can find similar stories in the history of all the large car servicing companies.

For example, US firm CarMax integrated auto financing and used car business. It has been facing competition from online used car platforms in recent years. To address the problem, CarMax rolled out its 'omni-channel platform,' which is aimed at allowing customers to buy a car online, in-store, or through any combination of the two. Cango's new business is similar to that of CarMax, getting through the information asymmetry between buyers and sellers. Chinese dealers are also adjusting their strategies to acquire larger chunks of the auto value chain. Zhongsheng Group, a high-end vehicle dealer, is concentrating on the used car business. Another dealership brand China Grand Automotive's business model consists of related businesses like auto financing.

We consider Cango's expansion to upstream business risky. As per above, large Chinese dealerships have been expanding their business scope and they may have the same addressable market. But luckily, Cango is deeply rooted in lower-tier cities, which are less attractive for large competitors.

Most overseas-listed Chinese stocks are currently facing a number of regulatory risks. However, as we stated in our previous NIO analysis, the government is targeting tech giants, as well as education and gaming businesses. In other words, sectors that directly influence the social sphere. Auto dealerships are less likely to suffer from the crackdown.

Cango has decided to expand its business to new energy and other upstream business segments. This strategic orientation is well-weighted and mainly based on two points. The separation of NEV OEMs and dealers will come and go, with the two models coexisting for a long time. Based on global examples, business diversity is necessary for a small car servicing company to grow. In addition, Cango's business is highly dependent on the auto trading activity in China, which is back on a growth trajectory and will contribute to the company's growth. Notwithstanding, the tumultuous summer of 2021 saw Cango decline to a historical low. This has triggered the company to launch a share buy-back program. We consider Cango an interesting investment opportunity at these levels.