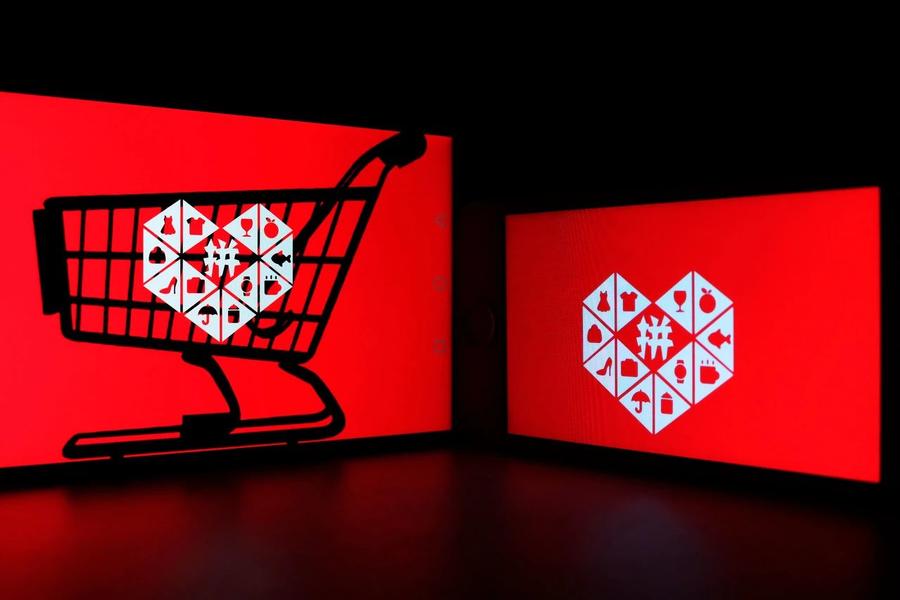 On August 24, 2021, Pinduoduo (PDD: NASDAQ) held its Q2 2021 earning call, showing rather impressive financial results. Its stock surged over 20% at the beginning of that trading day. 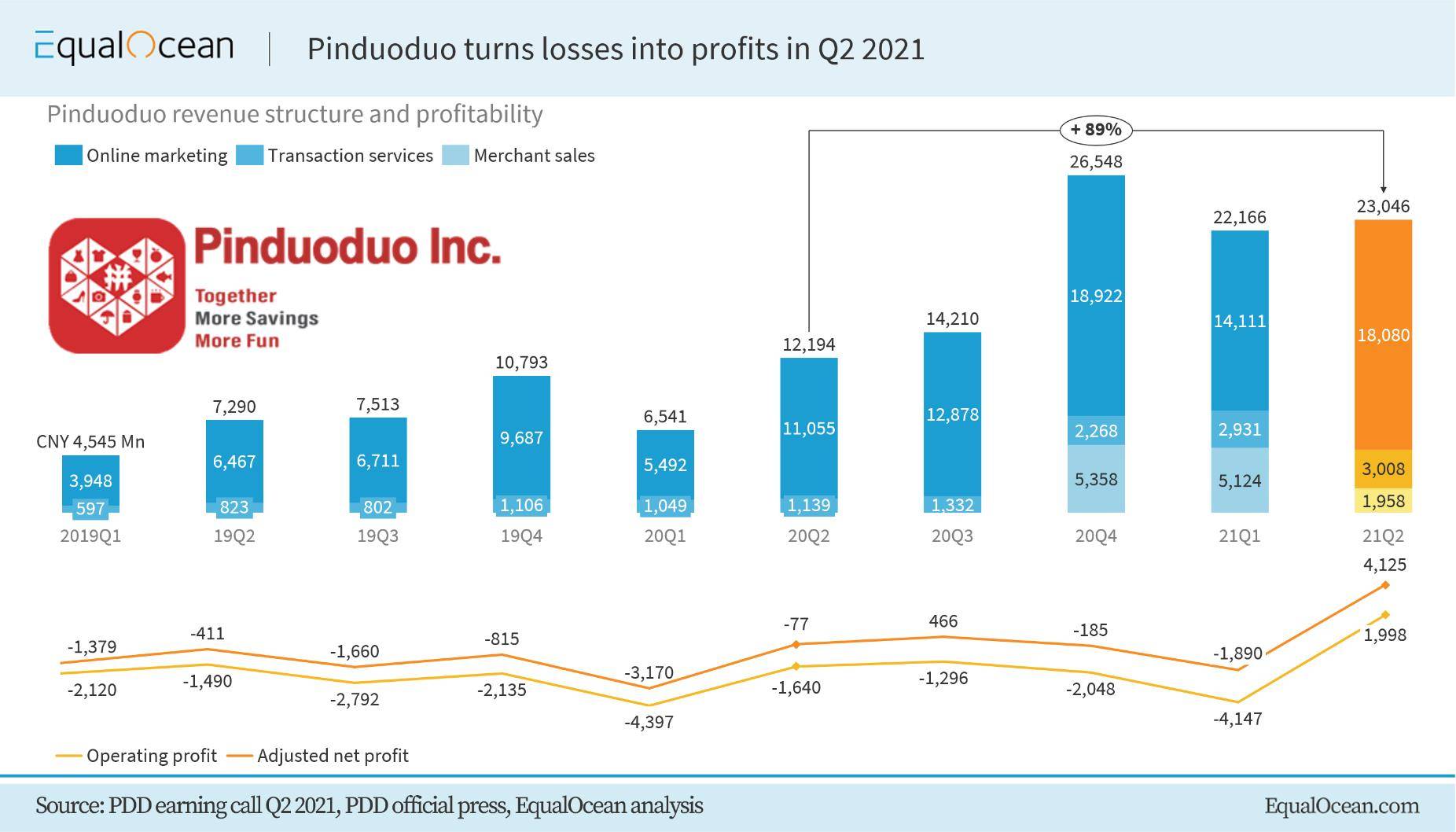 Pinduoduo turned losses into gains for the first time in the second quarter of 2021. In Q2 2021, the company achieved revenue of CNY 23.05 billion, up 89% year-on-year. Its operating profit reached nearly CNY 2 billion (with non-GAAP operating profit of CNY 3.19 billion), compared with an operating loss of CNY 1.64 billion. In the remarkable quarter, the company received gains (net income attributable to ordinary shareholders) of CNY 2.41 billion, which is a big move compared with a net loss of CNY 0.90 billion in the same quarter of 2020. The company's basic earnings per ADS increased to USD 0.30, and diluted EPS reached USD 0.27. At the same time, its annual active buyers reached 849.9 million as of June 30, 2021, and average monthly active users (MAUs) increased to 738.5 million, accounting for 87% of its annual active buyers, defending its leading position in China's e-commerce area.

Analyzing the financials, we found that Pinduoduo's cost control contributes the most to the result. Due to increased promotion and coupon expenses, the company's sales and marketing expenses only increased 14% to CNY 10.39 billion. In comparison, general and administrative costs only increased 10% to CNY 0.43 billion, compared with the same quarter in 2020. Its operating margin and the net margin reached a historical high in the past three years, accounting for 8.7% and 17.9%, respectively. Notably, its sales and marketing expenses ratio has been cut to 45%, compared with 81% and 73% for the same quarter in 2019 and 2020, showing its consistent cost control efforts.

When dissecting its revenue structure, we found online marketing services still act as the primary resource of its revenue, which reached CNY 18.08 billion, up 64% year-on-year. According to the earnings call, this was due to the continued increase in merchant activities while merchants are exploring new ways to engage with users. Meanwhile, revenues from transaction services reached CNY 3.01 billion, surging 164% year-on-year, owing to the fulfillment and services provided in the new Duo Duo Grocery platform. As for the revenues from merchandise sales, as a temporary way to meet user demand for specific products, the income from this section was CNY 1.96 billion.

Agriculture may become the key to its future

As one of the fastest-growing e-commerce companies globally, Pinduoduo has focused on lower-tier markets' consumption demand, becoming famous for value-for-money goods. Consumers can purchase products at a lower price as a group on its merchandise platform. In this way, consumers are allowed to share feedback regarding products on their social media accounts, further amplifying the advertising influence of the company at the same time. Pinduoduo only needed two years to gain CNY 100 billion GMV (in contrast, Ali Group and JD used five and ten years, respectively). The company went public on Nasdaq in July 2018. Then in March 2021, it became China's most prominent e-commerce giant in terms of MAU. 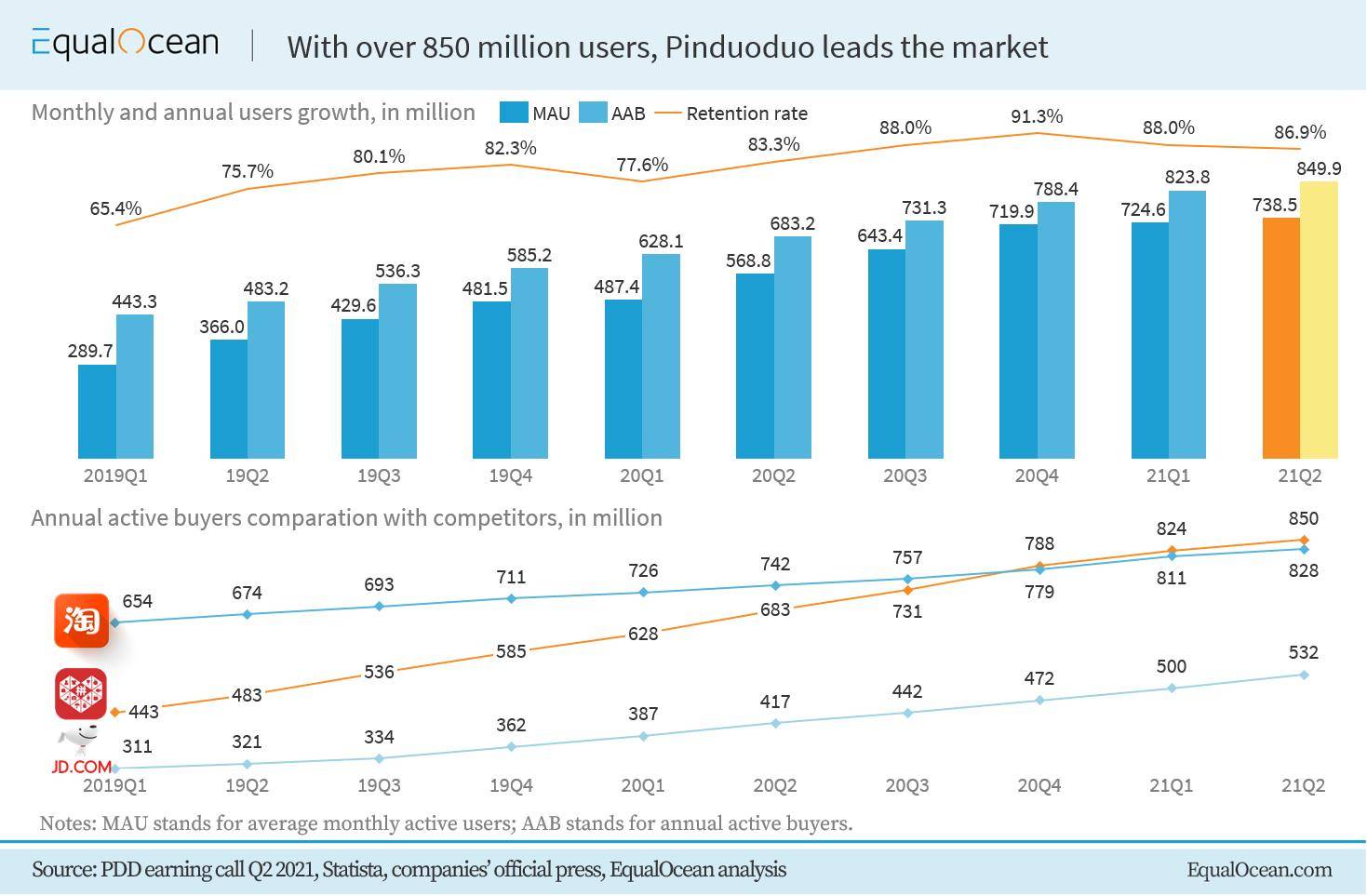 The company is infamous for some of its products' poor quality. Even though most of them are cheap, the quality is often worse than it's desired by consumers. To resolve this issue, here are two solutions: the company could build a higher quality sub-platform, or a more 'universal-type social welfare' platform, with which it can gather profit from a broader population. Pinduoduo chose the second one. In April 2019, the company launched a critical transformation, building the Duo Duo Farms platform to help farmers in China's impoverished counties create new online sales channels. In traditional ways, farmers sell primary products to dealers, and dealers trade themselves. When customers purchase the product, the price has been increased much higher than its cost, which harms both farmers and customers. Then, when PDD becomes the mediator, it connects farmers directly with consumers across the country and applies customer-to-manufactory (C2M) to help them build their brands, forming a win-win situation. By the end of 2020, the platform has helped over 1.13 million farmers to sell over 2.06 million tons of agricultural produce.

We think Pinduoduo's transformation had a positive impact on its business operations. Before 2020, Pinduoduo had adopted a low-cost publicity model to convert the advertising fees payable to the media into rewards for users who introduce new customers. However, at this stage, we believe that since user numbers are gradually approaching the ceiling (as over half of the people in China are Pinduoduo's users), the model of wildly attracting new customers may no longer be suitable for the company and is difficult to bring profit growth. Facts have also confirmed our idea that the growth rate of the company's MAUs has been gradually slowing down since 2019. So Pinduoduo turned its developing direction to retain its users and add more value instead of attracting more users. Focusing on China's most prominent supply side is a good strategy – after all, it is a blue ocean with few competitions.

Hence, we are optimistic about the long-term development of Pinduoduo and believe that its agricultural focus might generate new opportunities. 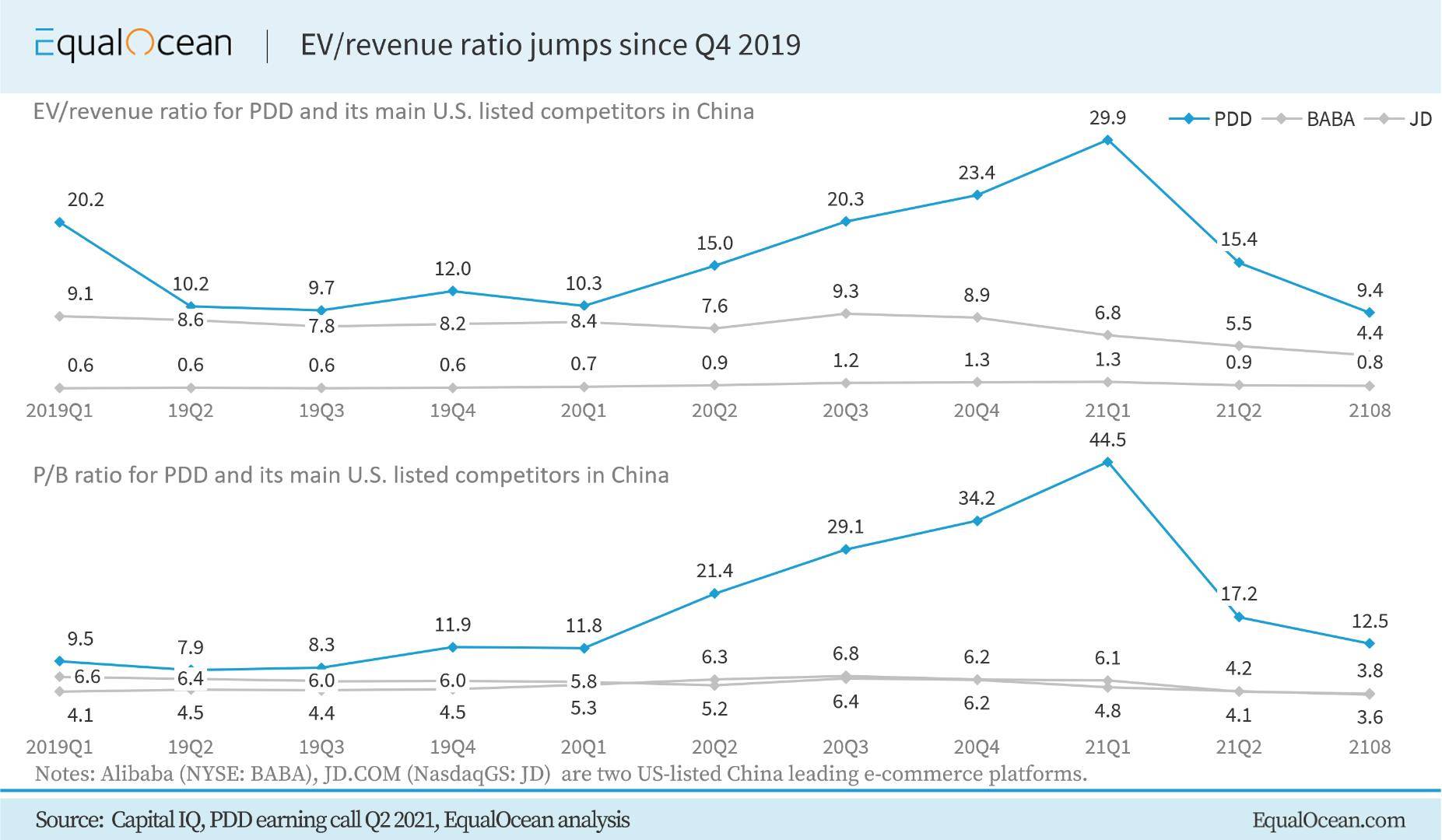 We used EV/revenue and P/B ratio to value the company. Considering that the company has been able to turn losses into profits and its competitors have much lower ratios, we decided to use the adjusted historical average method. From the chart, it is obvious that the ratio is at a low level, which we think is mainly caused by the regulation changes in China recently. Based on its current financial performance, momentum, and competitive landscape, we calculated that 13.5x EV/revenue and 17.5x P/BV is an appropriate valuation for Pinduoduo in 12 months, which corresponds to a target price of USD 141.52.

1. Pinduoduo's largest risk comes from possible conflicts with registered merchants. The company provides a favorable discount at the expense of downtrodden platform merchants. Besides, the merchants are the primary resources that benefit most of Pinduoduo's promotion activities. Small-scale merchants find it difficult to survive on this platform. In the long run, we think it will lead to the weakness of the supply side and harm the whole platform.

2. Another risk is that the problem of low-quality products still exists. Since the Pinduoduo platform has more razor-thin margins than other platforms, many merchants chose to sell defective goods in Pinduoduo while selling better goods on Tmall and JD.com. We think it is not conducive to the original impression transformation of the company in the long term.