George Soros, the famous financier, said in Wall Street Journal on September 6, 2021, that Blackrock, the world's largest asset management firm, that investing in China is a tragic mistake, which may cause loss of money for BlackRock's clients and will damage the national security interests of the United States. We believe that Soros' vigilance towards Chinese investment reflects the attitude of some international investors, especially venture capital (VC) and private equity (PE) companies, towards Chinese investment in recent years: on the one hand, he is surprised at the growth of Chinese companies, especially technology companies, and on the other hand, he is afraid of unknown investing risks.

The key to solving this dilemma is to understand the changes taking place in China. Our previous articles have been analyzed a lot (please check our other articles). In this analysis, we will focus on the participation of VC industries in the investment of Chinese companies and give some insightful views. 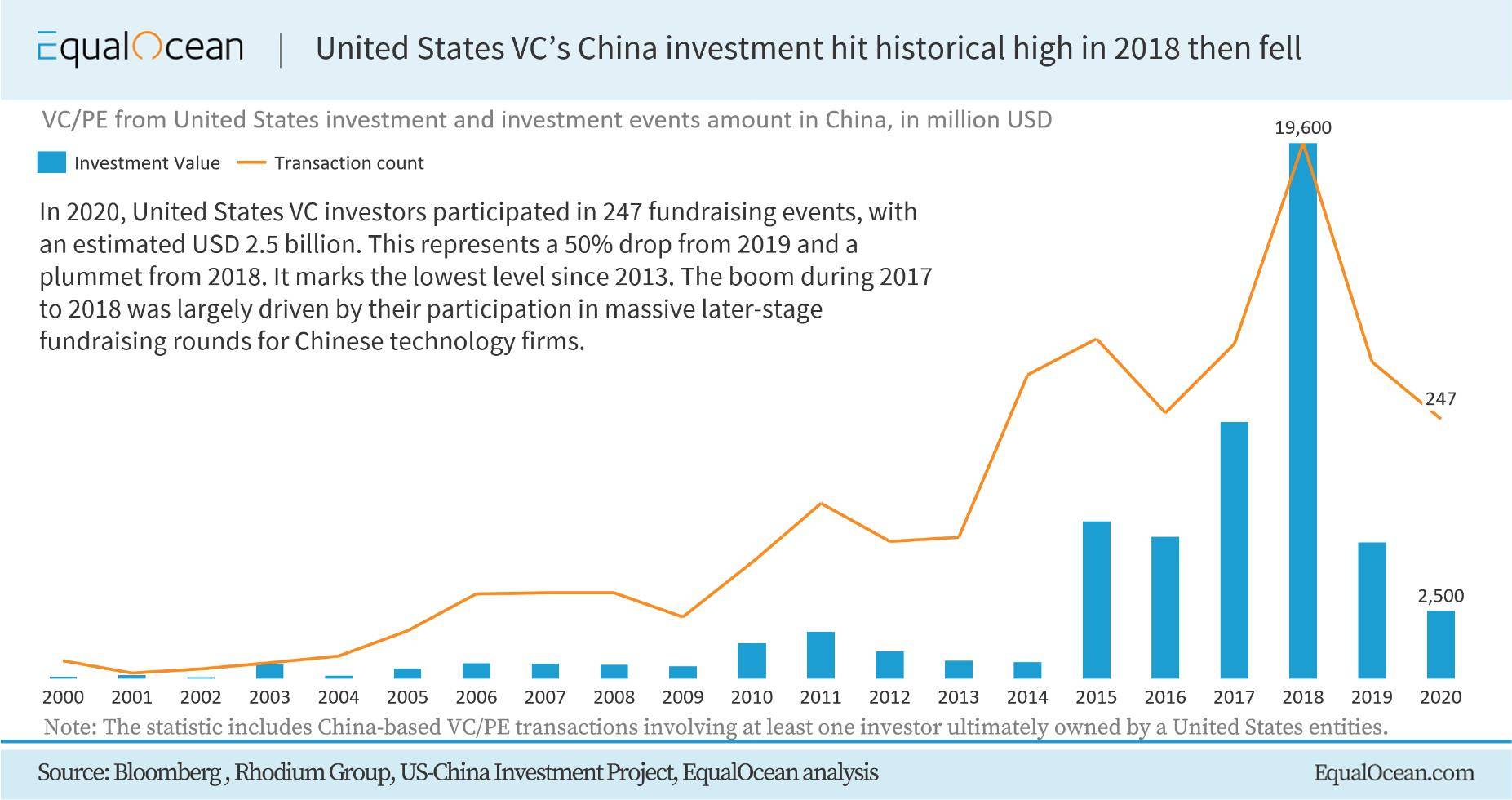 Since the Opening of China, foreign direct investment (FDI) has been the main way to invest in China. Since 2000, with the rise of the Internet Wave, international VC investors began to participate in China's economic development. Some Chinese giants we are familiar with have global capital behind them. For example, MIH company is the largest shareholder (30.9%) of Tencent, Softbank group is the largest shareholder of Alibaba (24.8%), and DiDi (21.5%). It can be seen that international capital plays an important role in the early development of Internet companies in China. And the trend had grown rapidly before 2018, which was hitting a historical high.

However, in 2020, US venture investors participated in 247 venture funding events for Chinese startups, investing USD 2.5 billion, down over 50% from 2019 and far below the level of 2018, making the lowest level of US capital deployment in Chinese startups companies since 2013. Analyzing the boom in 2018, we found it was mainly driven by US participation in before-IPO fundraising rounds for Chinese technology giants like Ant Group (USD 14 billion in Series C), Pinduoduo (USD 3 billion in Series C), and Bytedance (USD 3 billion in Series D). However, in recent two years, as the regulation becoming harsher and harsher (e.g., The shutdown of the Ant Financial IPO), the momentum of 2018 did not sustain.

The top sector for US VC in China in 2020 was Financial and Business Services, with 54 unique funding rounds. One of the most prominent deals was BOSS Zhipin (USD 270 million in Series F). Health, Pharmaceuticals, and Biotechnology was the second-highest sector for US VC investment. The chart shows that investments in Information and Communications Technology (ICT) are in a low status at all times. It indicates that in recent years, Sino–US trade frictions around cutting-edge technology have had dramatic adverse effects.

Though China seems to be gradually easing restrictions (e.g., Special Administrative Measures for Foreign Investment Access in 2018, and Li Keqiang's talk about advancing the opening-up in the banking and insurance sectors in 2021), in recent years, with the continuous outbreak of regulatory events, more and more international investors (PE/VC/mutual fund) began to question the correctness of investing in China, George Soros is one of them.

'Fear of the unknown'

Analyzing the topics in media and discussion on the Internet, we think international investors' concerns come from three aspects.

First, the main concern stems from the mismatch between China's development and the world's stereotype of China. The world's biggest stereotype of China has always been low-end manufacturing. JWT Intelligence released a report, and the data shows that the most common impression of 'made in China' to British and American consumers is mass production (over 60% people). In comparison, 55% of them have cheap impressions, and 35% have poor-quality images. In contrast, British and American consumers generally view 'made in Japan' and 'made in the United States.' These stereotypes make the world ignore China's rapid development in recent years and its achievements in many emerging technologies, such as advanced manufacturing, innovative healthcare, and communication technology.

Second, it is difficult for overseas investors to understand China's politics and culture. The political systems of China and the established capitalist countries (established capitalist countries led by the United States, British, Canada, and Australia) are very different. China's politics and culture have always focused on the welfare of all the people. Therefore, when capital or profits are concentrated in a few people, China tends to re-distribute these interests. This may not be understood by countries based on market economies. At the same time, China banned the entry of some social media and Internet companies in the early 21st century (mainly caused by the differential treatment of terrorist events in China and the United States by social media such as Facebook in 2009) to protect the security of China's network environment for long-term development. All of these reasoned, in seeking China investment, many international investors often face the difficulty of accurately obtaining useful information. Therefore, it is a difficult problem for both them and Chinese companies to have in-depth information exchanges.

Third, many developed countries have always believed that after China acceded to the WTO, China has not fulfilled its original commitments, such as opening China's financial sectors and removing foreign shareholders. This is a misread because analyzing the policies after 2001 because China is gradually relieving its economic restrictions (mentioned above). At the same time, since the 2008 financial crisis, countries have continuously launched a wide range of trade and industrial protection policies to achieve economic revitalization. Many developed economies such as the United States, the United Kingdom, and the European Union have revised the original relatively loose foreign investment regulation, extending the review period and increasing the review procedures, showing an increasingly harsh trend. Nowadays, the attitude and severity of policies of western developed countries towards foreign companies are very close to that of China. Many acts can testify to the point, such as the CFITUS Act of the United States, Proposed Legislative Reforms in the UK, and proposal for a regulation of the European Parliament and the Council establishing a framework for screening of foreign direct investments into the European Union.

When international investors, especially VC firms, can fully understand these three aspects and know what is going on in China, we believe the unwillingness of investing in China will ease up.

China's regulation changes towards tech giants only appear while the inner intention is to optimize its capital structure. Due to the late opening of the market economy (Deng Xiaoping's southern tour), China's economic development is relatively unbalanced. The quality of all kinds of investment needs to be improved. From the long-term historical cycle, China's adoption of stricter regulatory measures actually improves this situation.

As we all know, the preference of international investors depends on the future growth of the country's enterprises, that is, the return on investment it can bring. Now the world's large Internet technology companies are mainly concentrated in China and the United States. Besides, China has the most complete industrial chain worldwide, bringing high efficiency in designing and manufacturing processes. It means, for both software and hardware, Chinese companies are more worthy to be favored by international capital. Moreover, China maintains a high saving interest rate (over 3% higher than developed economies that has similar ratings), which is also a key investing point.

On the one hand, the Chinese government attaches great importance to social and economic stability. They hope that the people can afford all necessary expenses for life, such as education, healthcare, and housing. Anything that runs counter to this vision is likely to be under regulatory pressure. For Internet technology platform enterprises, China's anti-monopoly strength aligns with developed countries and eliminates cut-throat competition. For companies in the education industry, China hopes to become public utilities to ensure more equal rights in education. For the real estate industry, the government is trying to curb excessive leverage risk in China's financial system to ensure that China will not have an economic crisis like in 2008.

On the other hand, China's other policy focus is on national security, which requires a high degree of autonomy in data and technology control. It is evident that China's regulators are willing to support high-quality domestic tech-intensive companies, especially those from the global upper echelons. At the same time, China also hopes that these companies can follow the government's guidance in sensitive sectors such as data privacy. Certainly, the Chinese government tends to obtain more control, but this does not necessarily mean China will blame high-profitability companies. The goal of regulation on large Internet platforms may be to restrain monopoly and forbid predatory expansion.

Can invest, but pick sectors

As mentioned earlier, investors, especially VC companies, should not be afraid to invest in China. Investing in China is still profitable, but as WSJ said, China is a classic stock pickers market, which is also fit for VC industries and private companies, selecting specific industries and companies. We believe that the most profitable industries in China are always related to policies, such as Internet sectors in the first decade of 21 century and EV sectors in recent years. Being able to accurately judge the Chinese government's action indication and development plan is the key to the success of international investors. It should also be noted that the exit time is also of great importance when investing in these promising industries. Investment companies, especially VC, PE, and mutual funds, should not try to controlling interest in the long term because the Chinese government is likely to impose stricter restrictions on the proportion of international capital in these companies (we highly believe the healthcare sector will be the next target).

We summarize several key political points from 2021 to 2025:

Based on these, we believe that advanced manufacturing (including semiconductors), self-driving, advanced healthcare industry, and new-energy-related industry may win in the future.

To sum up, we believe that understanding the different systems between China and established developed countries is very important for companies that want to invest in China, especially in Chinese science and technology. At the same time, selecting some companies and industries supported by the Chinese government may make investors stand out in the next five years.