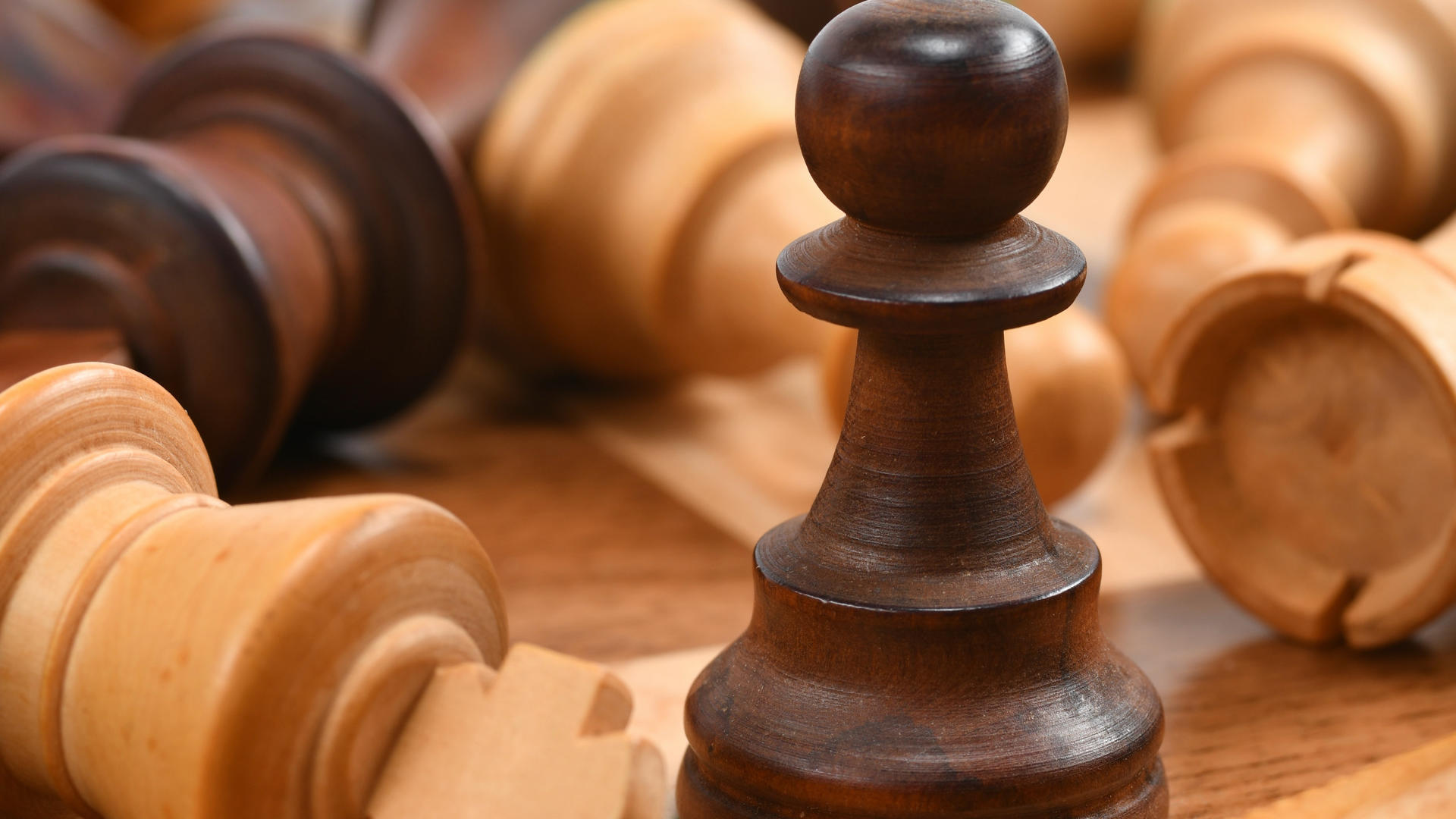 After a booming year in 2018, Wuxi has yet to slow down. The following article analyzes the success of Wuxi and its shortcomings 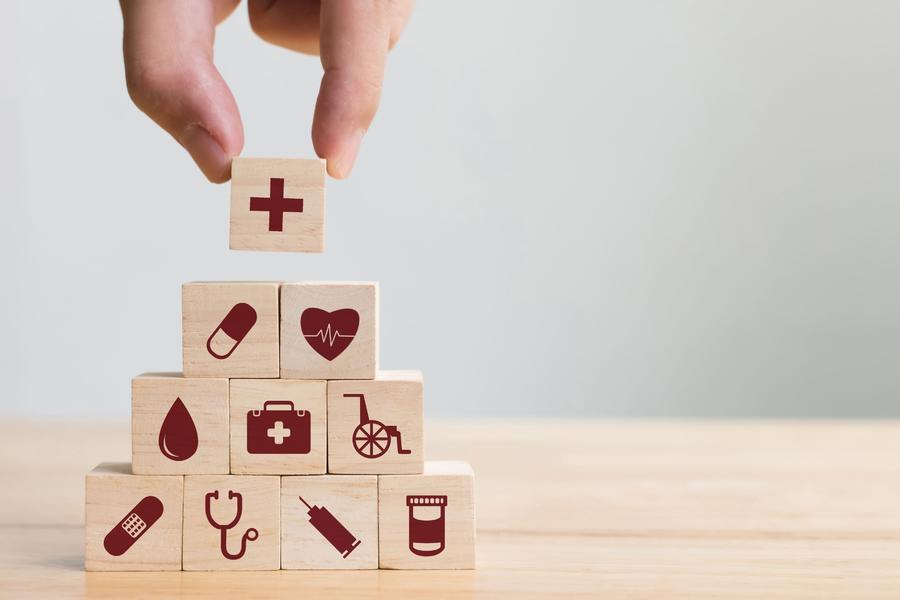 Wuxi PharmaTech, a contract research and manufacturing organization, was founded by Dr. Ge Li in 2000. The company changed its name to Wuxi Apptec after Wuxi acquiring Apptec Laboratory Services Inc., a US-based medical-device and biologics testing company. Wuxi was delisted from the NYSE after going private, with a valuation of USD 3.3 billion. The company has thrived under the leadership of Ge Li as Wuxi went from just 4 people in 2000 to over 28,000 employees in 2021. Ge Li claims that the company's main mission is to provide high-quality research services at low cost.

Wuxi has been growing rapidly since its inception, but we expect more imminent growth as China rolls out new healthcare-related policies and people become more health-conscious. Although the thriving healthcare market will inevitably attract new entrants that may evolve into strong competitors, Wuxi Apptec is highly likely to withstand the competition.

While brands like GNC and The Vitamin Shoppe helped raise healthcare awareness in the west, China was lackluster in this department and put little emphasis on personal well-being. Over the past decade, however, China's healthcare industry grew exponentially as society's attitude towards healthcare took a massive turn. The rising disposable income has led to the paradigm shift from being reactive consumers to proactive consumers. 84% of 3,000 respondents in China, in a survey conducted by Ipsos, reported that they are consciously making health-oriented decisions now.

According to a report by McKinsey, the global wellness economy, accelerated by COVID-19, has an estimated market size of USD 1.5 trillion as of 2021 with 5% to 10% annual growth each year. China reported the highest share of wellness spending online out of the six countries, including Japan. Monosodium glutamate (MSG) is a controversial flavor-enhancing ingredient for its possible adverse effects after consuming more than 3 grams.  Major MSG producer Henan Lotus is experiencing a steady decrease in sales as the Chinese population, once the largest consumer of MSG, is becoming more health-aware. Bain and Kantar Worldpanel also reported[PI4]  that sales of chewing gums have also decreased by 14% in the last two years, chocolate sales decreased by 6%, and confectionaries decreased by 4%.

President Xi announced the initiation of Health China 2030 (HC 2030) plan in October 2016. The main goals are to prioritize healthcare on a national level, spur innovations in the healthcare industry, promote scientific development, and bring equal access to public health services to all parts of China, especially the country's rural areas. HC 2030 also aims to establish and enhance social policies and institutional systems regarding health, cultivate a healthy environment and intensively promote the advancement of the healthcare industry. Companies in the healthcare industry have seen something of a boost in their revenue as the healthcare trend continues. By 2020, China had extended medical service coverage so thoroughly that 90% of residents could access the nearest medical point within 15 minutes. The medical cost growth was also curbed as 2020 marked the lowest proportion of residents' medical expenditure in 20 years, with 27.7%.

Government policies have favored the development of the healthcare industry in China, especially that of Contract Research Organizations (CROs) and Contract Development and Manufacturing Organizations (CDMOs). In 2015, China had a backlog of over 20,000 drug registrations pending review and approval. The National People's Congress (NPC) held a meeting to discuss the reformation of the drug registration system. As a result, China Food and Drug Administration (CFDA) regulators received more resources than in the past, and the government launched the Market Authorization Holder Program (MAH) to make it easier to bring new drugs to the market. Furthermore, the Review and Approve Process (RAP) was simplified and made more efficient. For example, high-quality generics for orphan conditions with robust bioequivalence data will be eligible for expedited review during the CFDA's regulatory process. As of July 2021, a rare disease database (Orphanet) has recognized over 6,000 diseases, propelling pharma companies to roll out more medicine that will undergo a newly implemented process. CROs and CDMOs benefit from these new policies as pharma companies look to increase their research output to develop and produce new drugs. The expedited RAP incentivizes companies to roll out new drugs to cope with the increasing number of orphan diseases recorded.

Wuxi Apptec is a "fully integrated contract research development and manufacturing organization with the ability to provide one-stop services that offer its clients assistance in discovery, development and manufacturing service demands." The wide variety of services that Wuxi covers allows the company to embrace the soaring healthcare market in China. Wuxi Apptec expects to extend its impact further as the global new drug R&D outsourcing market snowballs. However, Wuxi must persists in its R&D investment to fare well against companies with more flexible cash flow and new entrants with newer technology. .

With a boom in customer demand, China's pharmaceutical R&D and manufacturing service market is expected to maintain its current high-speed growth. Wuxi's unique competitive advantage comes from its cost-efficient services. As of 2021, Wuxi has over 28,000 employees, most of whom are chemists, making Wuxi possibly the biggest employer of chemists in the world. Since the company has cheaper labor cost than the industry average, Wuxi can produce almost the same amount of research output for a fraction of the price (around 25% to 40% less than western companies' services). 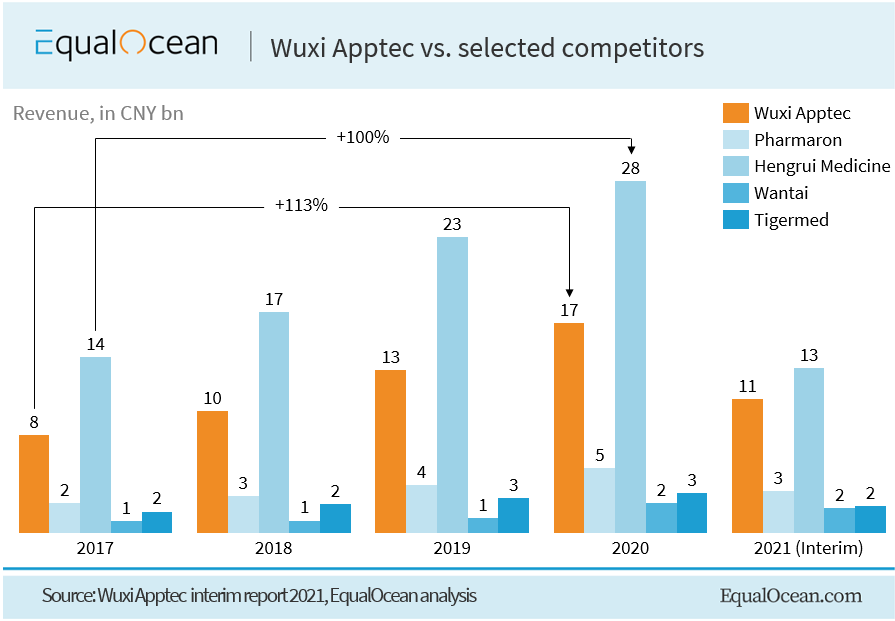 Additionally, policies such as the MAH, expedited reviews, and HC 2030 have encouraged pharmaceutical innovations in China. Wuxi can capture the rising demand from Chinese pharma companies with its rather high R&D efficiency. Although Wuxi may not have the financial strength of some significant pharma companies with in-house R&D departments, the company will retain its leading position as one of the most profitable R&D and manufacturing businesses in China.

According to Wuxi's interim report this year, the company realized CNY 10.54 billion total revenue, a year-over-year growth of 45.70%. CNY 2.50 billion came from China, which represents year-over-year growth of 48%. This data showcases the company's ability to capture the rising healthcare tides and demands for research and innovations. 48% growth also marks the largest increase comparing to the company's revenue growth in the US and Europe. Wuxi also has 100% retention rate of its top 10 customers from 2015 to the interim of 2021. As of June 30, 2021, the company's new clients have contributed CNY 849 million in revenue. Frost & Sullivan published a market research report in June 2021, which ranked Wuxi Apptec first by market share in the China-based drug discovery CRO market, pre-clinical and clinical CRO market, and small molecule CDMO market. 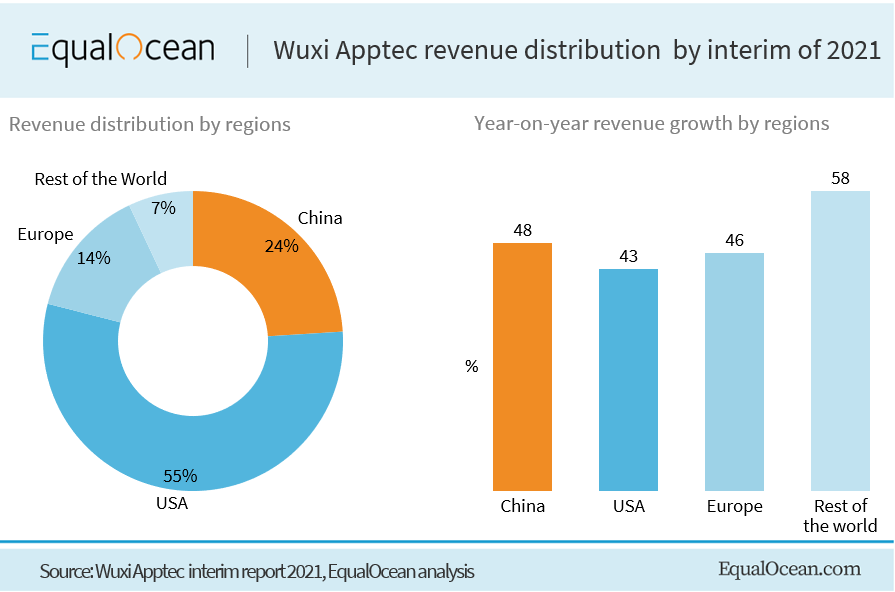 The combined forces of new policies and rising healthcare awareness have put Wuxi Apptec in a prime position to consolidate its leadership in China. The company should remain profitable as long as it maintains below industry average labor cost, heavy investment in its R&D department and reasonable M&A strategies to help expand and improve Wuxi's services and operations. Given the recent regulatory crackdown on Chinese tech companies, Wuxi should tread carefully in its effort to capture a more significant share in the Chinese market.

China's rapid growth in the healthcare industry bodes well for the nation, but what does it mean for its people? While the government poured resources into promoting innovations and development in the medical field, the affordability issue gained little attention. Although China has over 90% of residents with basic health insurance plans, it still poses a hefty paycheck for the average worker. Despite the rising wave of healthy living, China has to do more to provide sustainable healthcare.

CONTACT US
Scan QR code to contact us for professional consulting services
Next article
China Chips: Will China Dominate the World Semiconductor Market in 5 Years? [2/2]