COVID-19 Aftermath and the Benefit of Investing in Chinese Pharmaceuticals 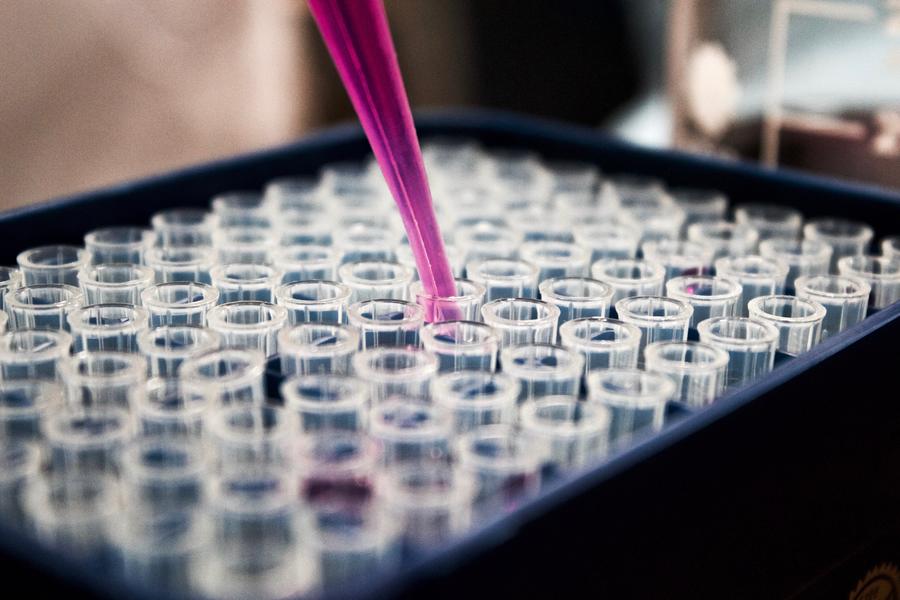 Covid-19 is still changing the way we work and live, as well as lifting the prosperity of many industries. The most obvious example is the biomedical industry. After China completed virus genome sequencing in January 2020, the world entered a race to develop therapeutic drugs and vaccines. At the peak, there were more than 200 new COVID-19 vaccines are under research globally.

Due to the accelerated research and development of vaccines and covid-related pharmaceuticals, the biomedical industry experienced a boom. In 2020, the US biomedical market reached USD 125.2 billion, up 9.9% year-over-year. In China, driven by technical progress, industrial structure adjustment and the increase of consumption payment capacity, the scale of China's biomedical market seems to be growing faster. In 2020, the scale of China's biomedical market reached CNY 387 billion, with a five-year CAGR of 20%. After analyzing China’s strong demand side and some unique advantages, we believe China will reach an advanced level globally.

The recent high growth has raised the expectation of investors to an unprecedented level. How to screen potential winners in such a sector is becoming challenging work.

China has been well-known for its large population base since ancient times. In recent years, cancer and common diseases caused by aging and bad living habits are drawing more and more attention. According to the 2020 Chinese Census, China's population aged older than 60 reached 264 million, accounting for 18.7% of the total population, up 5.4% compared with a decade ago, indicating the problem of population aging is becoming severe. It is worth noting that China's overweight population reached 170 million and the number of smokers reached 310 million. At the same time, the number of patients with cardiovascular diseases reached 290 million, the cumulative number of respiratory diseases patients reached 45.7 million and cancer patients reached 4.4 million. This shows China's strong demand for biotechnology services. With its unique targeting and other advantages, biomedical research has attracted great attention, especially in oncology, neurology, orphan diseases, and infectious diseases. Coupled with the rise of the epidemic in 2020, biomedicine has become the sector with the most potential.

As the research and development frontier of the pharmaceutical industry, China's policies have always been favorable to this industry. In the twenty-five year ‘plan for the national development of strategic emerging industries’ issued by the State Council in 2015, it is clear that the development direction of China's biomedical industry mainly includes three aspects, namely, the development of biotechnology pharmaceuticals, vaccines, and specific diagnostic reagents, modern traditional Chinese medicine. In 2020, the State Council issued the Opinions on Deepening the Reform of the Evaluation and Approval Systems and Encouraging Innovation on Pharmaceuticals and Medical Devices and put forward 36 rules promoting the innovation process in the healthcare industry, of which biomedical is one of the key areas.

Although China's biomedical sector is developing rapidly, there is still a considerable gap from the United States. In 2020, the R&D expenditure of Johnson & Johnson reached USD 12.16 billion, far exceeding that of the Chinese company with the highest expenditures, BeiGene (USD 1.29 billion). In fact, the total research investment of China's top 30 players is even less than that of Johnson & Johnson. In terms of the number of innovative pharmaceuticals, from 2014 to 2019, the United States produced an average of 43 innovative drugs every year, while China produced only 4.2. The innovative pharmaceuticals market size in the United States was close to USD 400 billion in 2020, ten times that of China.

Besides the market size and research input, a challenge of China’s biomedicine sector is that the production structure is unbalanced: the production capacity of high-end pharmaceuticals is insufficient, but there is overcapacity of low-end drugs (generic products). For example, more than half of China's vaccine production products are used to prevent common diseases such as poliomyelitis and measles, while pharmaceuticals for cancer and AIDS vaccines are seldomly being researched. At present, Chinese biomedical companies’ product independent research ability is relatively weak – only about 5% of the original biological pharmaceuticals approved for listing in China are innovative remedies.

Nevertheless, we believe that China has several secret weapons to help it gradually moves to the forefront of biomedical research and occupy a more advantageous market position; they are as follows.

Secret weapons for overtaking the competition

In recent years, China has issued a series of policies – such as Consistency Evaluation of Pharmaceuticals from the Perspective of Quality Management and Centralized Procurement and Use of Drugs – which have constantly put pressure on generic pharmaceutical companies and promoted them being innovative. It is particularly obvious in the field of tumor immunology and has been extended to all major molecular models and diseases in recent years. According to Global Oncology Trends 2021 released by IQVIA Research, the early cancer pharmaceuticals developed by companies headquartered in China have increased from 6% in 2015 to 18% in 2021. It is worth mentioning that China's total share in the field of next-generation tumor biotherapy has reached 13%. At the same time, in the research trials of the world's 25 largest biomedical companies, China's participation rate has reached a historical high of 21%. There have been built 1,297 CAR-T therapy trial centers globally, 284 of which are located in China.

We found the global epidemic in 2020 was a turning point, and now China's biomedical industry is accelerating to catch up with global leading companies. Many innovative pharmaceuticals developed in China have been introduced to large multinational pharmaceutical companies, such as the CD47 trading agreement between AbbVie and I-MAB Biopharma and the PD-1 trading agreement between Eli Lilly and Cinda Biomedical. It can be expected that in the near future, China will have the ability to develop world-class biomedicines.

Another very important card in China’s hand is that the tie between China and other countries is strengthening. The total market value of contract development and manufacturing organization (CDMO) and contract manufacturing organization (CRO) listed on the NASDAQ, HKSE, and STAR market or increased from less than USD 1 billion in 2016 to USD 176 billion in 2021, indicating strong momentum. Besides, many well-known international biomedical companies are investing in China projects, the merger of China dMed Company and Clinipeace from the US is a good example. In the meantime, Chinese companies have also begun to establish businesses in other countries. For example, BeiGene and Hutchmed are increasing the layout of the US market by focusing on molecular pharmaceutical research.

3. Talents are the keys

Furthermore, China is playing an increasingly important role in the global talent market. Many Chinese biomedical companies are attracting talents with an overseas study background or work experience in well-known overseas pharmaceutical companies, especially at a higher level. For example, the team leader of Genentech's global tumour centre has been hired by Zai Lab as the president; BeiGene 's Vice-President of the HR department once worked for Pfizer; The CEO of Everest Pharmaceuticals has worked in Eli Lilly for 20 years.

AI also plays a significant role in China’s biomedical area. As we mentioned in previous articles, from the preclinical drug discovery stage to the late clinical trial stage of drug research and development, AI technology has penetrated into many links of drug research and development, especially in the stage requiring big data analysis and high-throughput testing, with the most obvious advantages, such as benchmark compound design, disease target prediction, silicon compound library design, and ADMET property prediction. In addition, biomedical companies can also greatly reduce pharmaceutical costs by using AI technologies, which can not only shorten the time of drug discovery and preclinical research by nearly 40%, but also save about 60% of the time in the clinical trial stage. The USD 26 billion of compound screening cost and USD 28 billion of clinical trial cost of China can also be saved through AI pharmaceutical technology. AI technology has shown great value in China's biomedical pharmaceuticals, providing further possibilities for China's overtaking in some areas.

After knowing the secret weapons and opportunities of China, we summarized several characteristics of possible successful companies in the future (some of which come from today's industry leaders) and combined with EqualOcean's SPC model (Strategy & Shared value; Product & Tech-driven; Customer & Operations) to draw the competition pattern of China's biomedical sector.

We believe that if investors want to invest in such an area, it is particularly important to identify the following six characteristics:

The SCP model drawn based on the above six traits summarized by us is as follows: 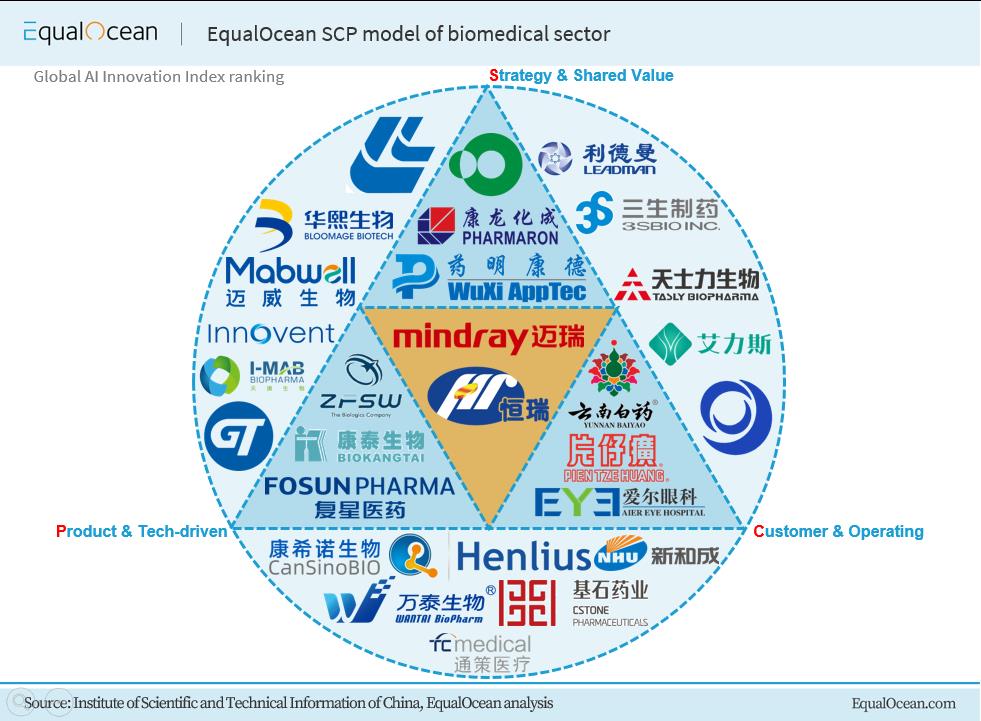 The biomedical industry was once called 'the industry on which the sun never sets. We expect that the sector will enter a new development period in 2022. At the same time, with the shortening of the investment risk cycle, the next 10 years maybe a golden period for domestic and international investors. At the same time, we also remind investors once again that all biology-related industries including the biological sector have the characteristics of deep-tech, high upfront input, high risk, long investment cycle and interdisciplinary. Therefore, it is very important to do stock picking work and our SCP model may give investors some clues.

We firmly believe that great innovative drug companies may emerge in China in the next 10 years, whose products will be sold not only in China but to the whole world. China's innovative biomedical companies will eventually benefit all of humankind.